These results are the average frames per second, derived from the frame times, for the entire 180 second benchmark run, combining data for normal, medium and heavy batch scenes. 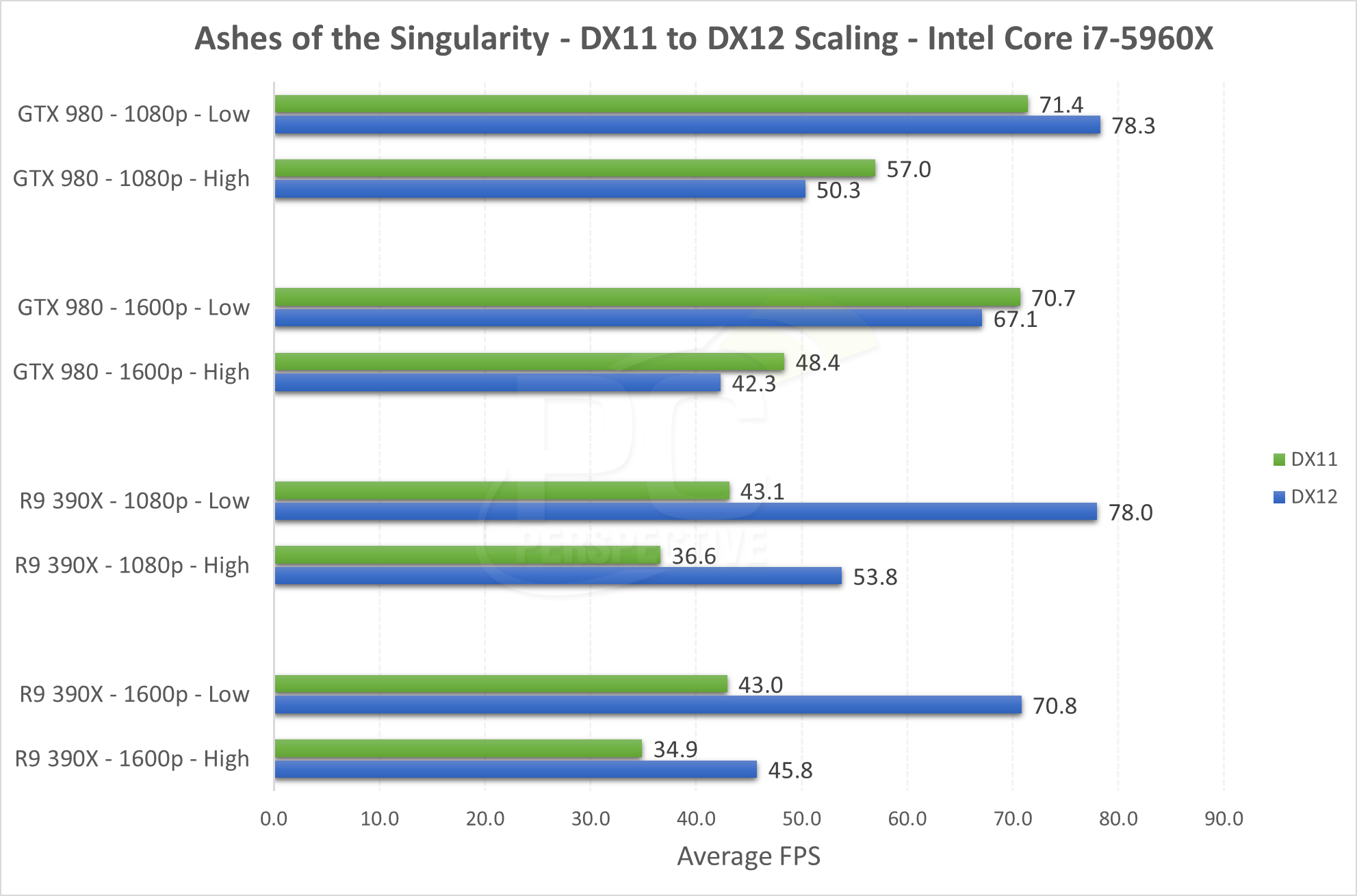 There is a lot of information in each graph so be sure you are paying attention closely to what is being showcased and what bars represent what data. This first graph shows all the GPUs, resolutions and APIs running on the Core i7-5960X, our highest end processor benchmarked. The first thing that stands out to me is how little different there is between the DX11 and DX12 scores on the NVIDIA GTX 980 configuration. In fact, only the 1080p / Low preset shows a performance advantage at all for DX12 over the DX11 in this case; the other three results are showing better DX11 performance! 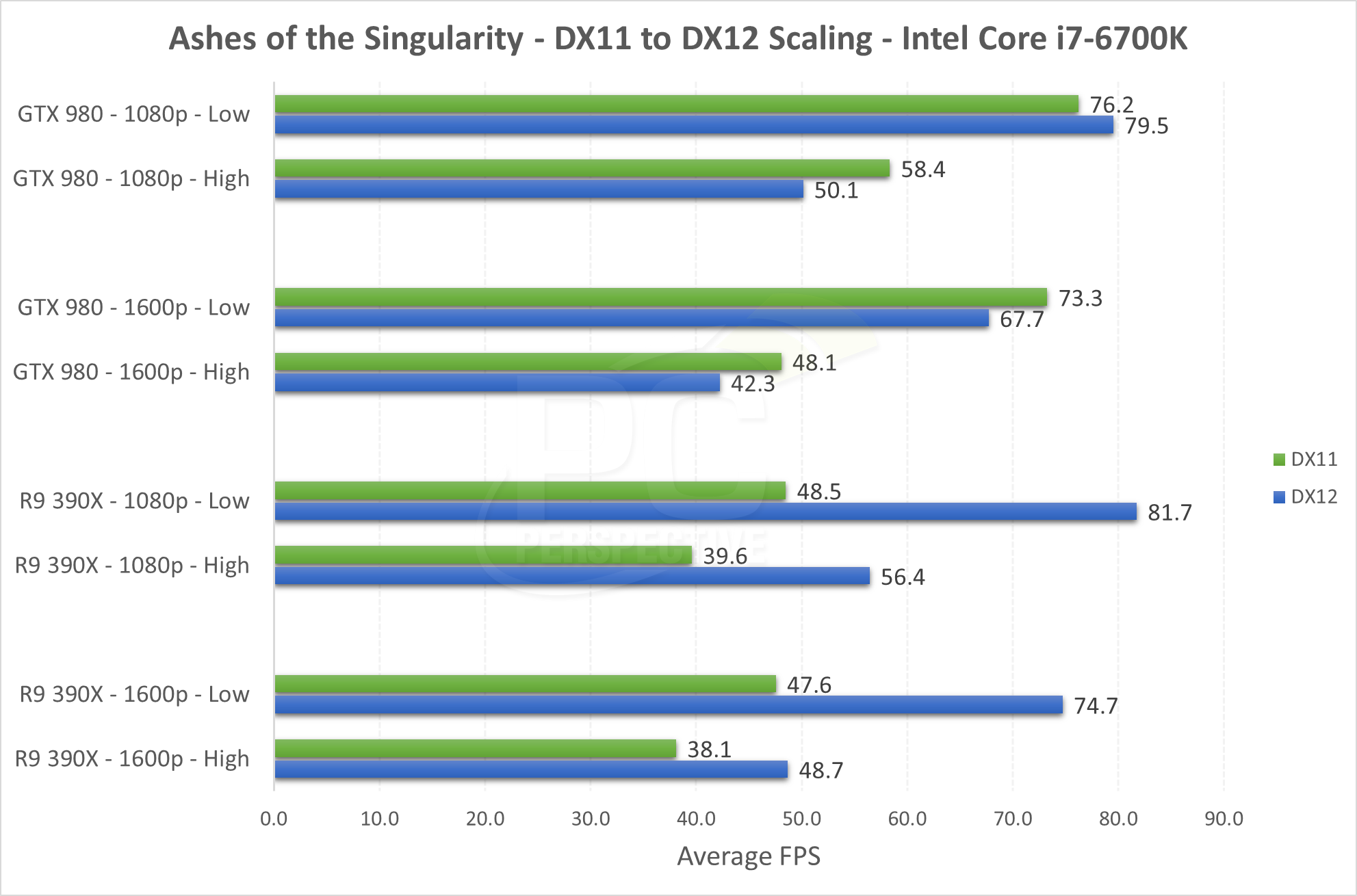 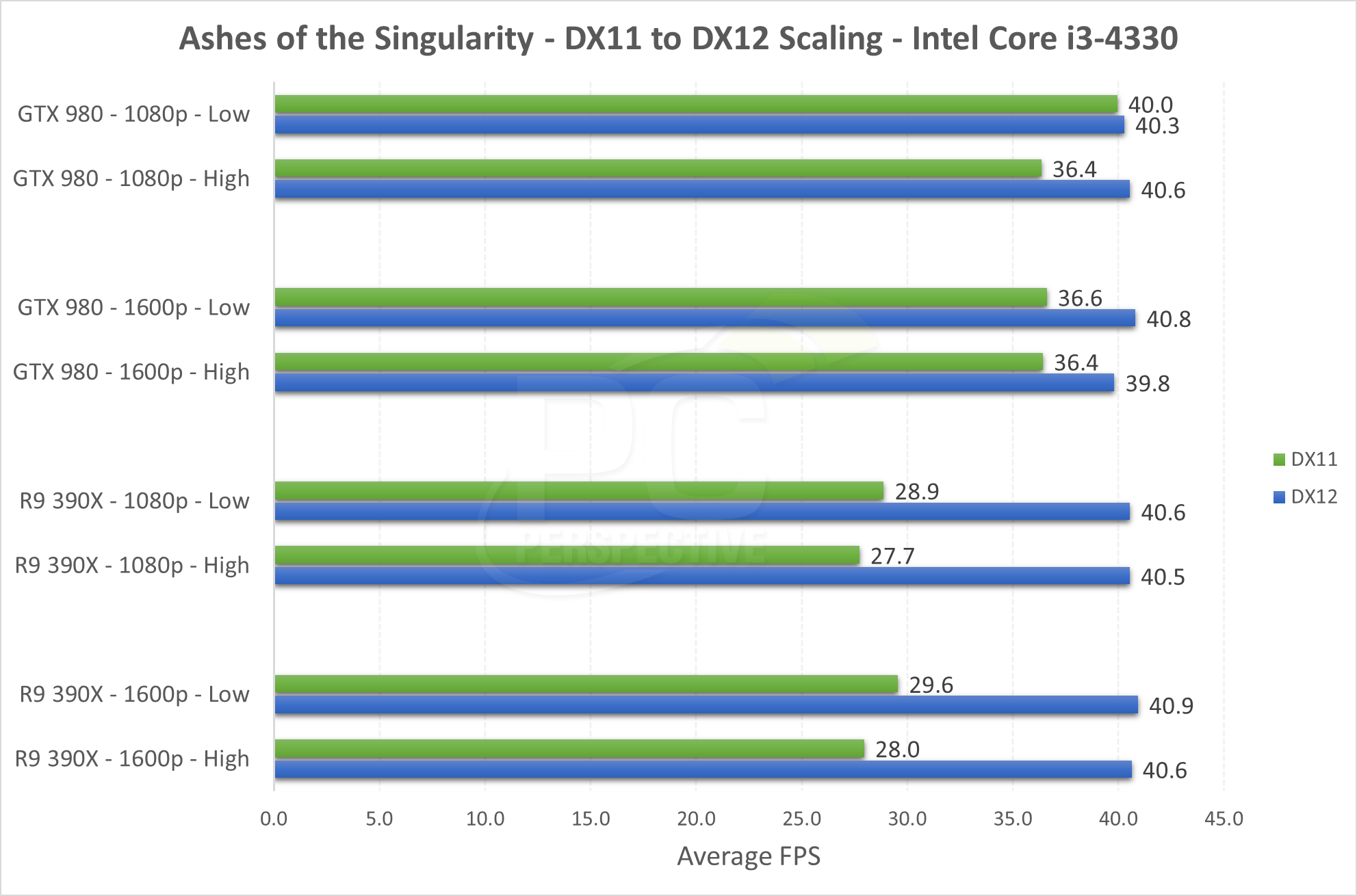 Things look a little different as we step down to the Core i3-4330 processor with only two full cores and four threads courtesy of HyperThreading. This time, the DX12 implementation on NVIDIA’s hardware is faster than on the DX11 code path across the board, but only by 11% or so. For the R9 390X, that DX12 advantage is increased to 38-40%, again bringing the Hawaii-based GPU up to the same performance level as the Maxwell-based GTX 980. Again though, note the difference on where the two GPUs “started” with DX11 scores – the GTX 980 was quite a bit higher than the Radeon card. 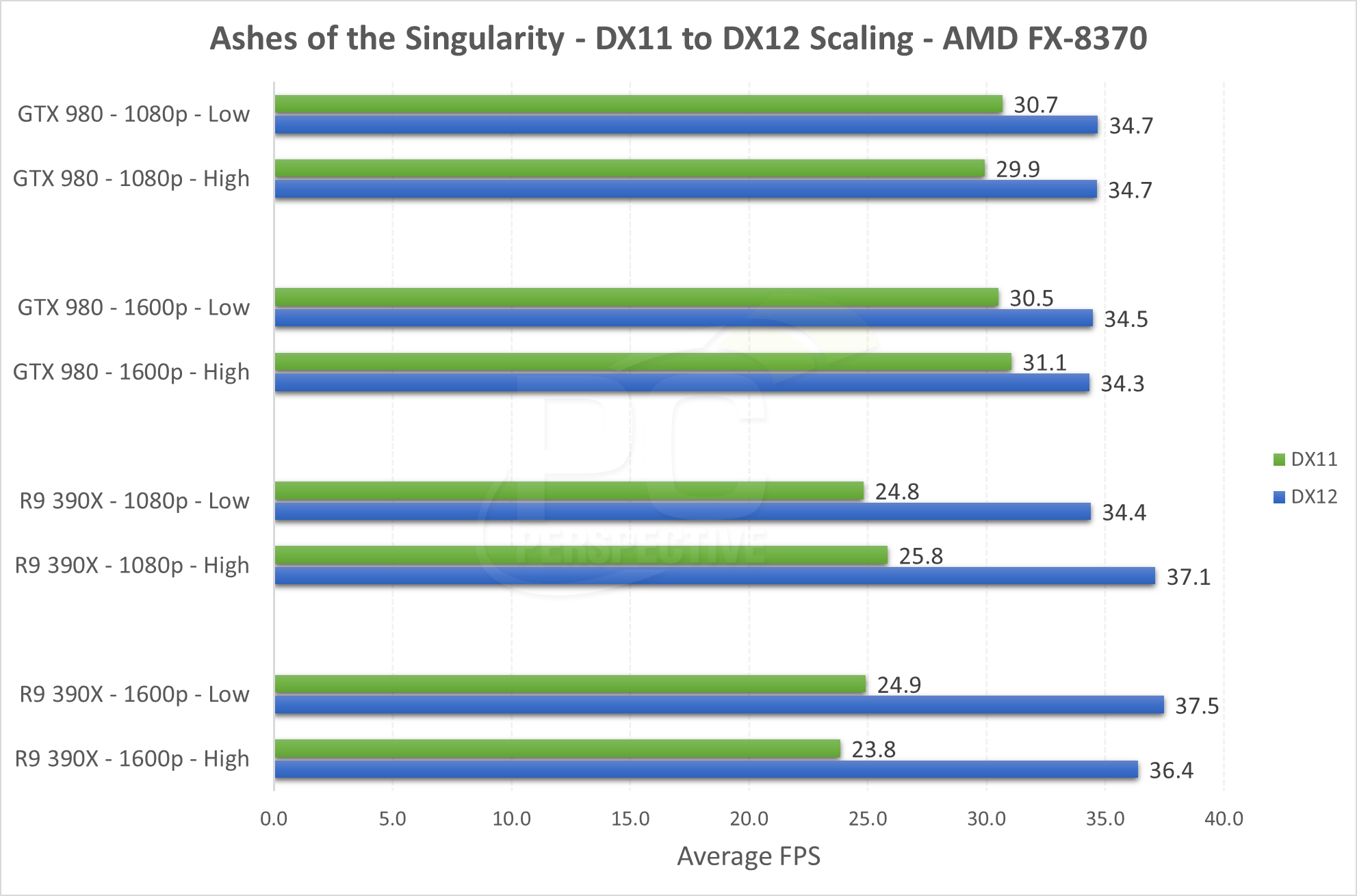 Somewhat telling about the overall performance provided by the AMD FX-8370 compared to the 8-core Intel processor, the results for this round of testing look very similar to those found on the Core i3-4330. NVIDIA’s GTX 980 sees consistent DX11 to DX12 scaling of about 13-16% while AMD’s R9 390X scales by 50%. This puts the R9 390X ahead of the GTX 980, a much more expensive GPU based on today’s sale prices. 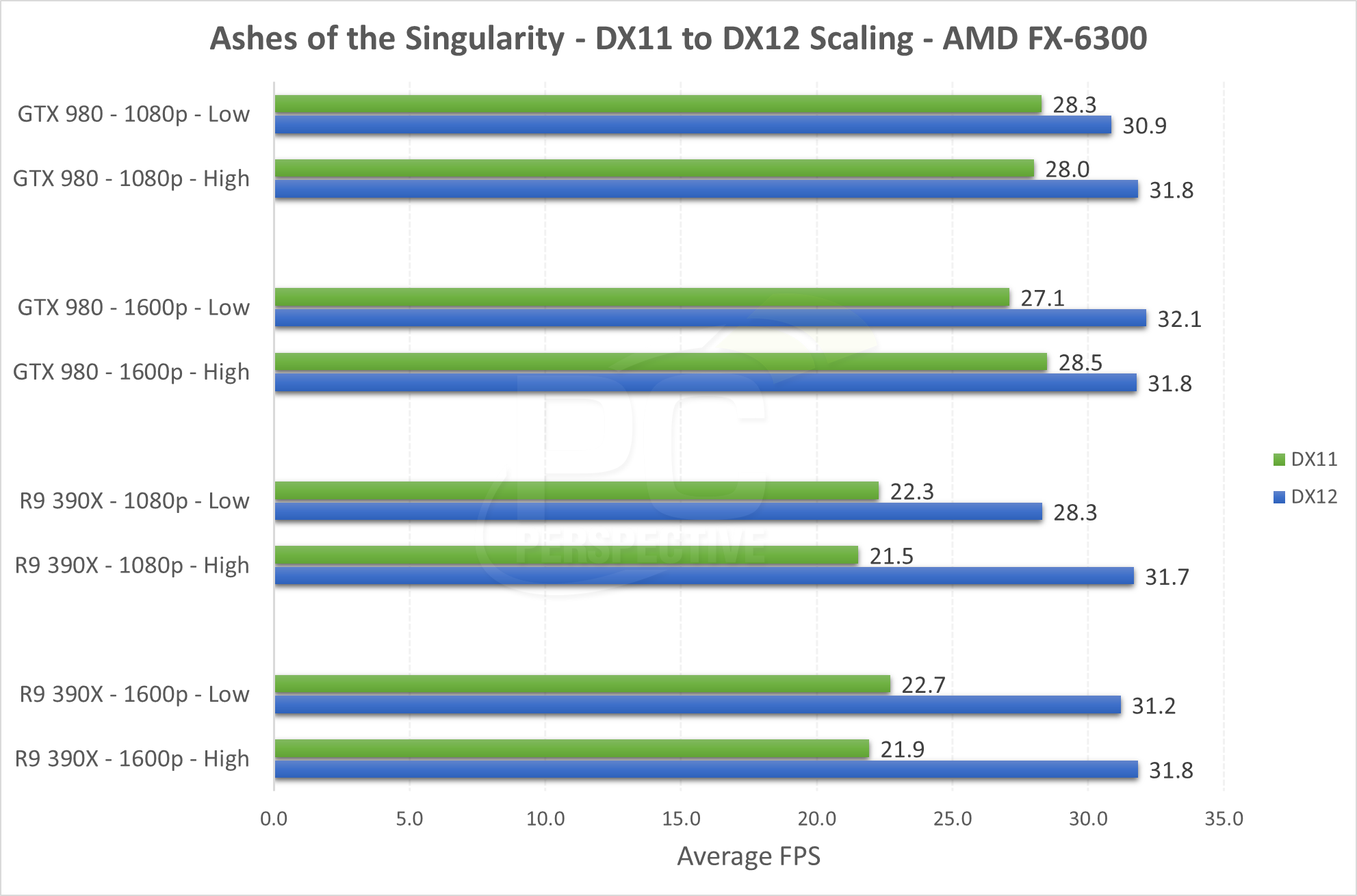 Our final individual CPU test shows the same pattern – smaller scaling for NVIDIA’s configuration and larger scaling amounts for the Radeon hardware but with very similar “end” results in terms of DX12 average frame rates. And again, the DX11 performance is significantly better for NVIDIA’s hardware. 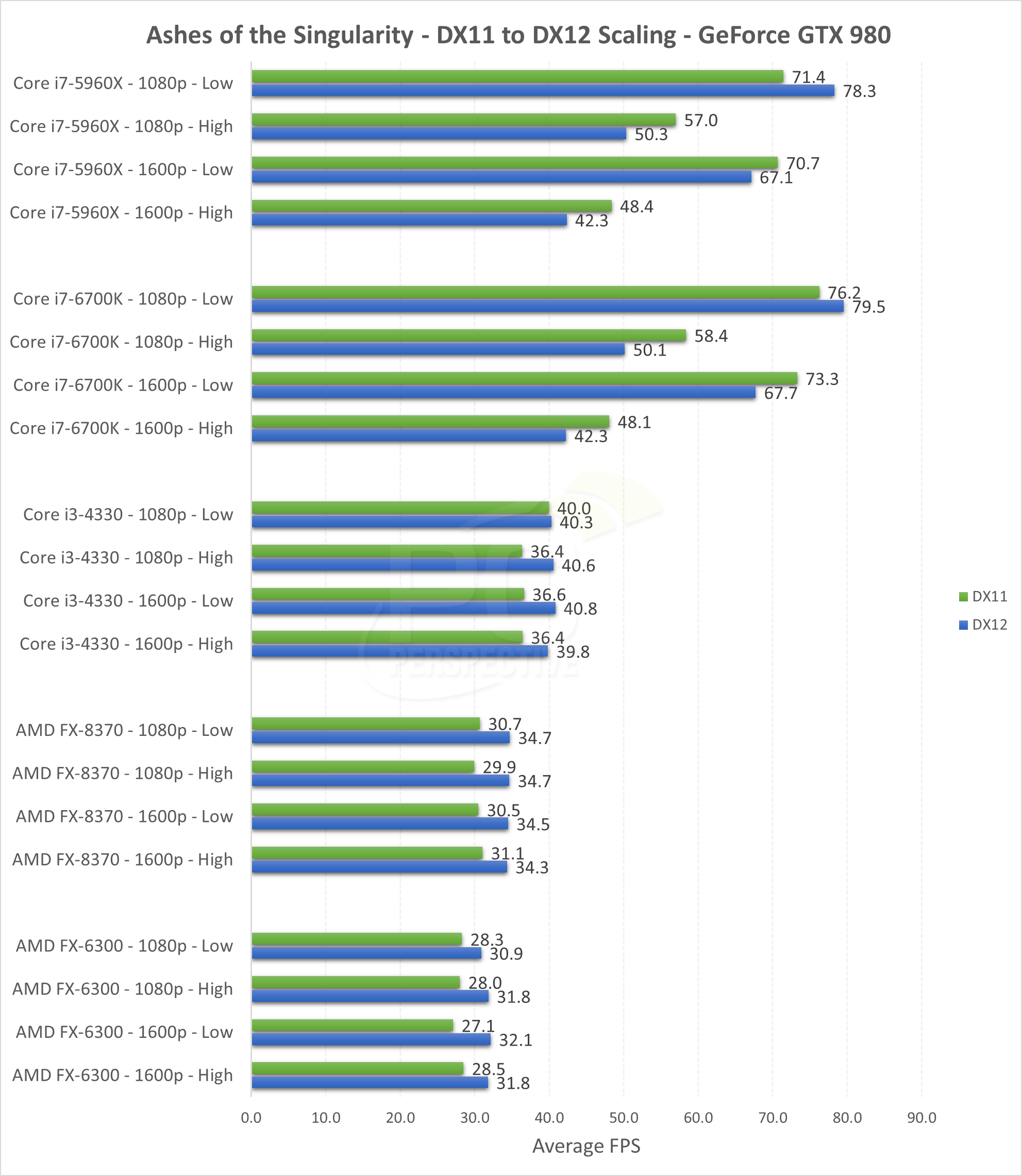 This graph shows all of the GTX 980 results across the five different processors without adding in the R9 390X data. It is easy to see now how the 5960X and the 6700K processors perform and behave very similarly to each other, with very little headroom for DX12 to improve things on already very faster CPUs. It seems obvious to me here that the DX11 driver implementation from NVIDIA is so robust and optimized that the high single / dual threaded performance of these higher end CPUs just doesn’t offer much room for DX12 to improve things. Once you get to the Core i3-4330 and the two AMD CPUs though you can tell that DX12 is helping the engine perform a little better – but again the DX11 advantage that NVIDIA holds over AMD’s hardware is making it difficult for DX12 to shine as brightly as you might have expected. 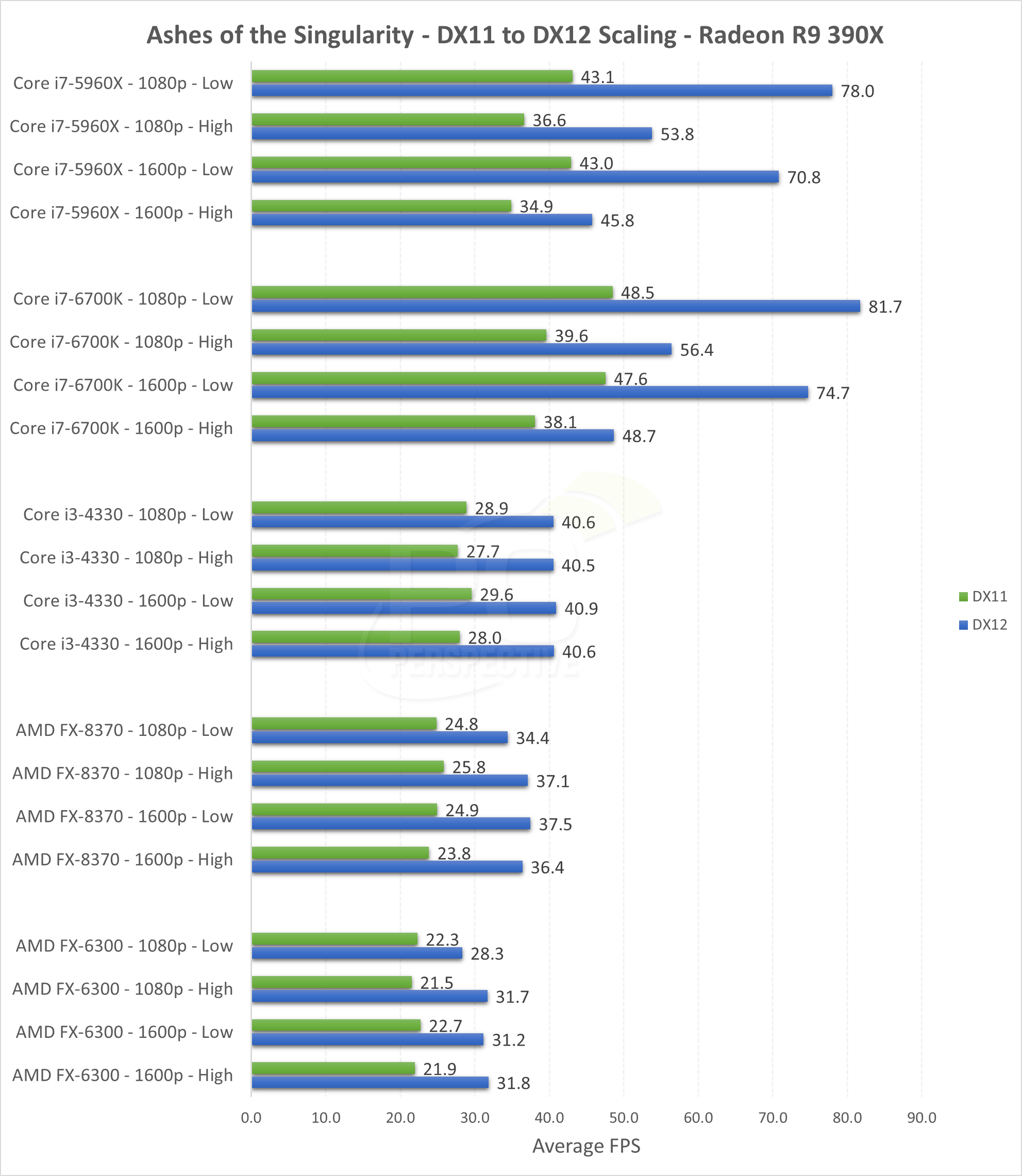 Things are very different for the R9 390X in our testing – the high end processors offer up DX12 scores that are as much as 80% faster than the DX11 scores for the same hardware! As the CPUs slow down this difference scales a bit less but is still consistent and large enough to make a noticeable different in gameplay and frame rate smoothness. 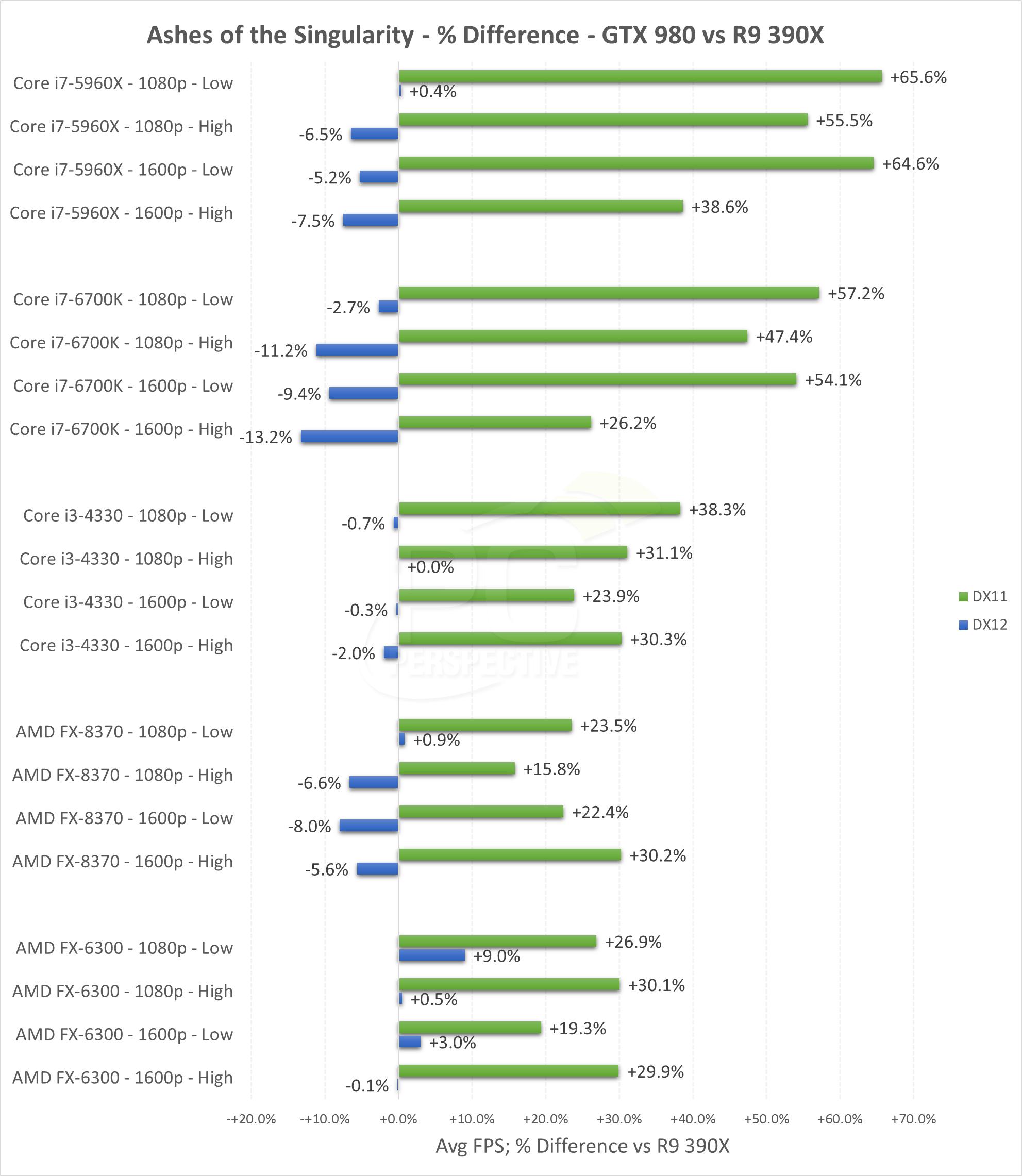 Finally, this graph attempts to show which card has an advantage on each processor with each setting and with each API. We are using the R9 390X as the baseline score, meaning that any positive percentage result means the GTX 980 is faster while a negative score means the R9 390X is faster.

The green bars are for DX11 performance and in every single instances the GTX 980 is faster, never by less than 15% and often stretching to over 50%! That is not a small advantage and though this benchmark is built to showcase DX12 potential, AMD users should at least by concerned about lost DX11 performance potential in AMD’s current hardware with current shipping games.

The blue bars of DX12 show a different story where AMD’s R9 390X is more often faster than the GTX 980. There are a few cases where NVIDIA’s performance is slightly ahead, but more often than not the gains that AMD sees moving from DX11 to DX12 not only completely make up for the DX11 performance deficit but also bump it ahead of the more expensive graphics card from NVIDIA.

Now, let’s see how the results change if we only look at the heavy batches of test scenes.

Get one more and you’ll have a Quad