Thought Intel has provided very little in terms of technical information, Skylake is here FIRST for the enthusiasts and gamers. Is it worth it?

The Intel Skylake architecture has been on our radar for quite a long time as Intel's next big step in CPU design. Through leaks and some official information discussed by Intel over the past few months, we know at least a handful of details: DDR4 memory support, 14nm process technology, modest IPC gains and impressive GPU improvements. But the details have remained a mystery on how the "tock" of Skylake on the 14nm process technology will differ from Broadwell and Haswell.

Interestingly, due to some shifts in how Intel is releasing Skylake, we are going to be doing a review today with very little information on the Skylake architecture and design (at least officially). While we are very used to the company releasing new information at the Intel Developer Forum along with the launch of a new product, Intel has instead decided to time the release of the first Skylake products with Gamescom in Cologne, Germany. Parts will go on sale today (August 5th) and we are reviewing a new Intel processor without the background knowledge and details that will be needed to really explain any of the changes or differences in performance that we see. It's an odd move honestly, but it has some great repercussions for the enthusiasts that read PC Perspective: Skylake will launch first as an enthusiast-class product for gamers and DIY builders.

For many of you this won't change anything. If you are curious about the performance of the new Core i7-6700K, power consumption, clock for clock IPC improvements and anything else that is measurable, then you'll get exactly what you want from today's article. If you are a gear-head that is looking for more granular details on how the inner-workings of Skylake function, you'll have to wait a couple of weeks longer – Intel plans to release that information on August 18th during IDF.

So what does the addition of DDR4 memory, full range base clock manipulation and a 4.0 GHz base clock on a brand new 14nm architecture mean for users of current Intel or AMD platforms? Also, is it FINALLY time for users of the Core i7-2600K or older systems to push that upgrade button? (Let's hope so!)

Get this folks: PC gaming is a thriving business. Intel first attempted to make good with enthusiasts and overclockers with the release of Devil's Canyon, the Core i7-4790K. That CPU boosted clock speeds at a slight TDP increase while pushing clocks to their highest out-of-box settings yet. They were fully unlocked and priced very competitively against previous Haswell-based processors. They were great parts and I was glad to see Intel investing some money and resources in a community that most of us thought that it had written off.

Intel today offers another olive branch to our readers and fans.

Kindheartedness aside, Intel is in for the money: PC gaming continues to be big business. Game revenues are the largest form of software sales, gaming across all platforms leads all other forms of entertainment and that crazy eSport segment is expected to grow from 89M to 145M units by 2017. 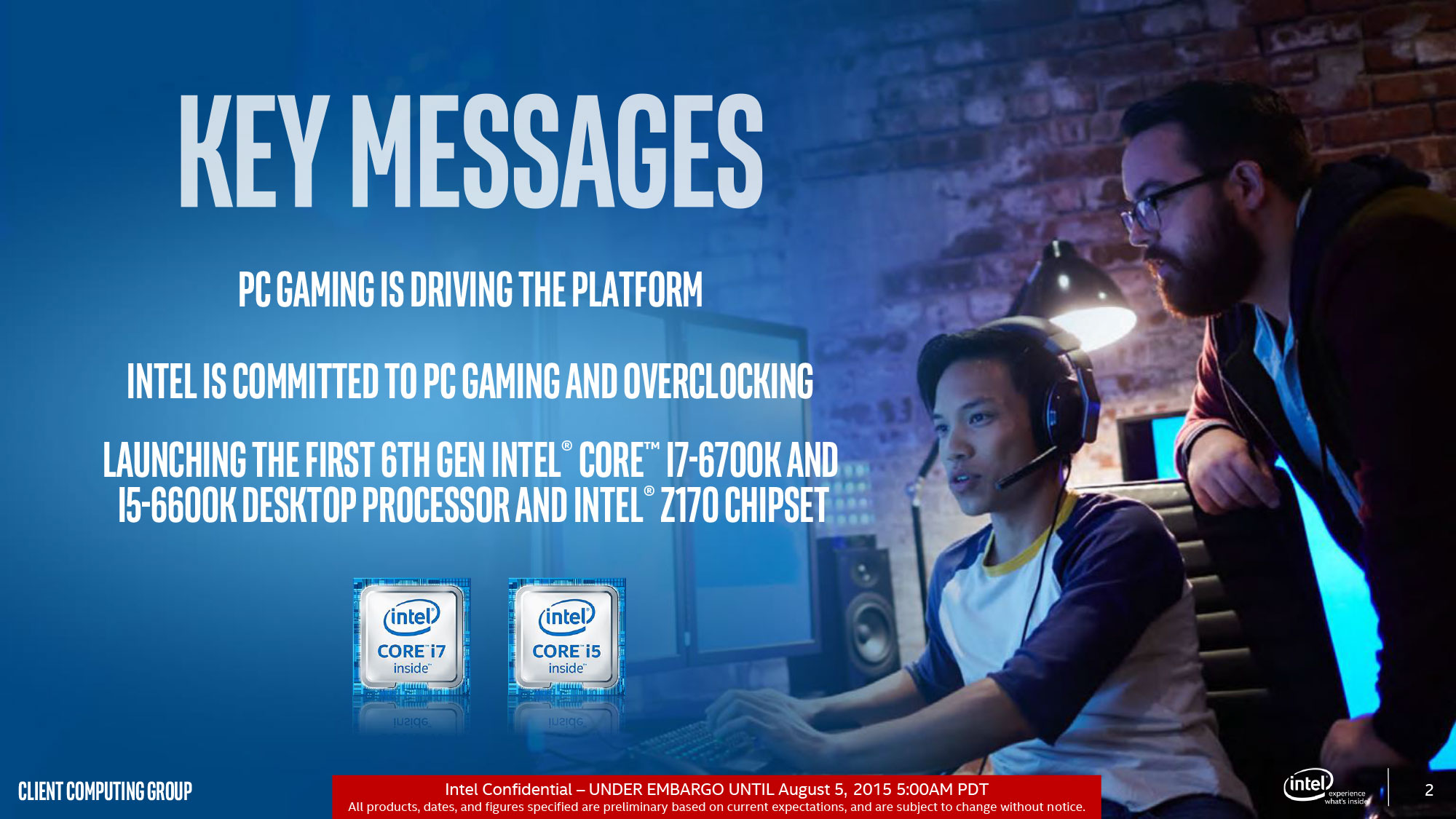 And as any PC gamer knows, the PC is where the real innovation occurs. Yes, Xbox owners have the Kinect, but nearly every other noteworthy shift happens on the PC. Virtual reality, downloadable gaming, streaming gaming, free to play, etc. – these are all technologies and directions that were started or perfect on the PC. Intel wants to make sure they are part of that, and not just in a passive manner.

Based on the same 14nm process as Broadwell, a CPU architecture that only recently saw a release to the DIY builder (and only then in a pair of options), Skylake is still built around a quad-core, HyperThreading capable design. The base clock speed of 4.0 GHz matches that of the Core i7-4790K though the maximum Turbo clock rate of 4.2 GHz is 200 MHz slower than we saw on the Devil's Canyon part. Still, with reasonable IPC improvements from Haswell to Skylake, that matched clock speed should result in noticeable performance improvements.

One change that we did notice for the Skylake architecture is its move away from the FIVR, Fully Integrated Voltage Regulator. It was first introduced during the Haswell architecture disclosure and was touted as revolutionary, simplifying the board and platform design significantly. However with Broadwell we already saw some back peddling as Intel admitted having to by-pass the FIVR for ultra-low power implementations due to efficiency issues. This time the company says that removing it "enabled improved power efficiency" across a "much broader range of thermal design powers." This means that from 2-in-1s to desktop gaming PCs, the power delivery solution returns to the motherboard. 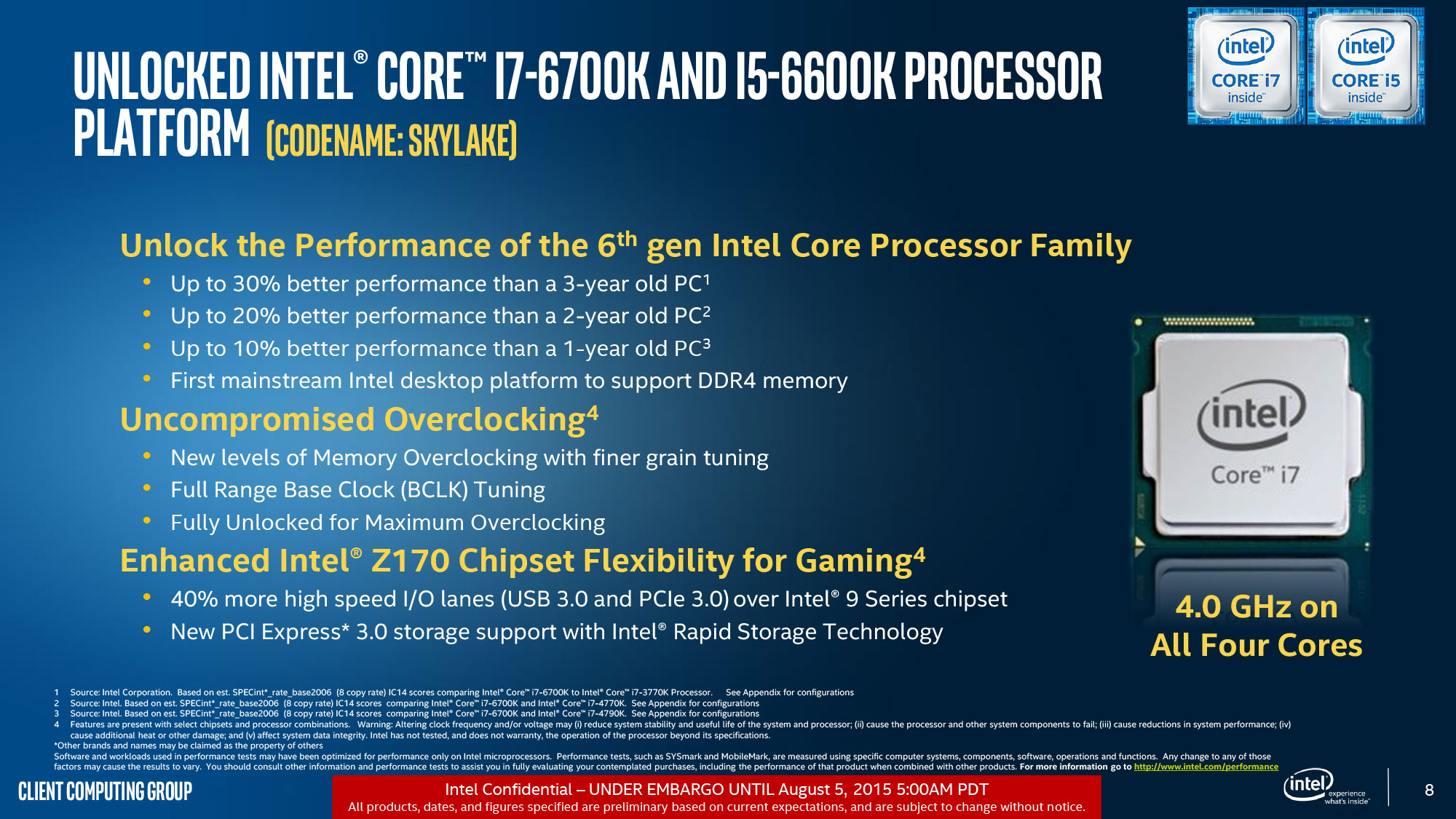 The biggest specification change (other than the new socket) is the move to DDR4 memory technology. Yes, Skylake will be able to support both DDR3L and DDR4. DDR3L integration will, with a few exceptions, only occur on low-cost solutions like notebooks and tablets. This marks the second consumer platform to integrate DDR4, following the release of Haswell-E and the X99 chipset nearly a year ago. Official specs limit the DDR4 memory speed to 2133 MHz but, in our testing with the new ASUS Z170-Deluxe motherboard and memory from Corsair and G.Skill, getting 3400 MHz is definitely possible.

The system bus design has also been upgraded this time; we are now on the third revision of DMI with a bump in performance to 8.0 GT/s, which is equivalent to x4 lanes of PCI Express 3.0. This upgrade in bandwidth turns out to be incredibly useful for platform builders like ASUS that can take advantages of up to 20 lanes of PCIe 3.0 on the Z170 chipset itself! That means new storage options, configurations and more expandability for the non-E level of processors from Intel.

The integrated graphics on Skylake are drastically improved though the details on how they are doing it are still a mystery until we get to IDF. Our IGP test shows nearly 50% performance improvements for the Intel HD Graphics 530 compared to the HD Graphics 4600 on Haswell. As it turns out, Broadwell and the Core i7-5775C with its Iris Pro graphics and eDRAM implementation are still going to blow the Core i7-6700K out of the water, but more on that later.

Thermal levels of the Core i7-6700K rest at 91 watts, just a handful higher than the Core i7-4790K and 4770K. The Core i7-5775C is much lower thanks to a lower clock speed set. The important thing here is that Skylake scales well up to this TDP level and provides excellent performance along the way. The fear of having Intel completely abandon the DIY market with process tech and CPU designs that are only geared for low-power implementations has been alleviated for at least one more generation. 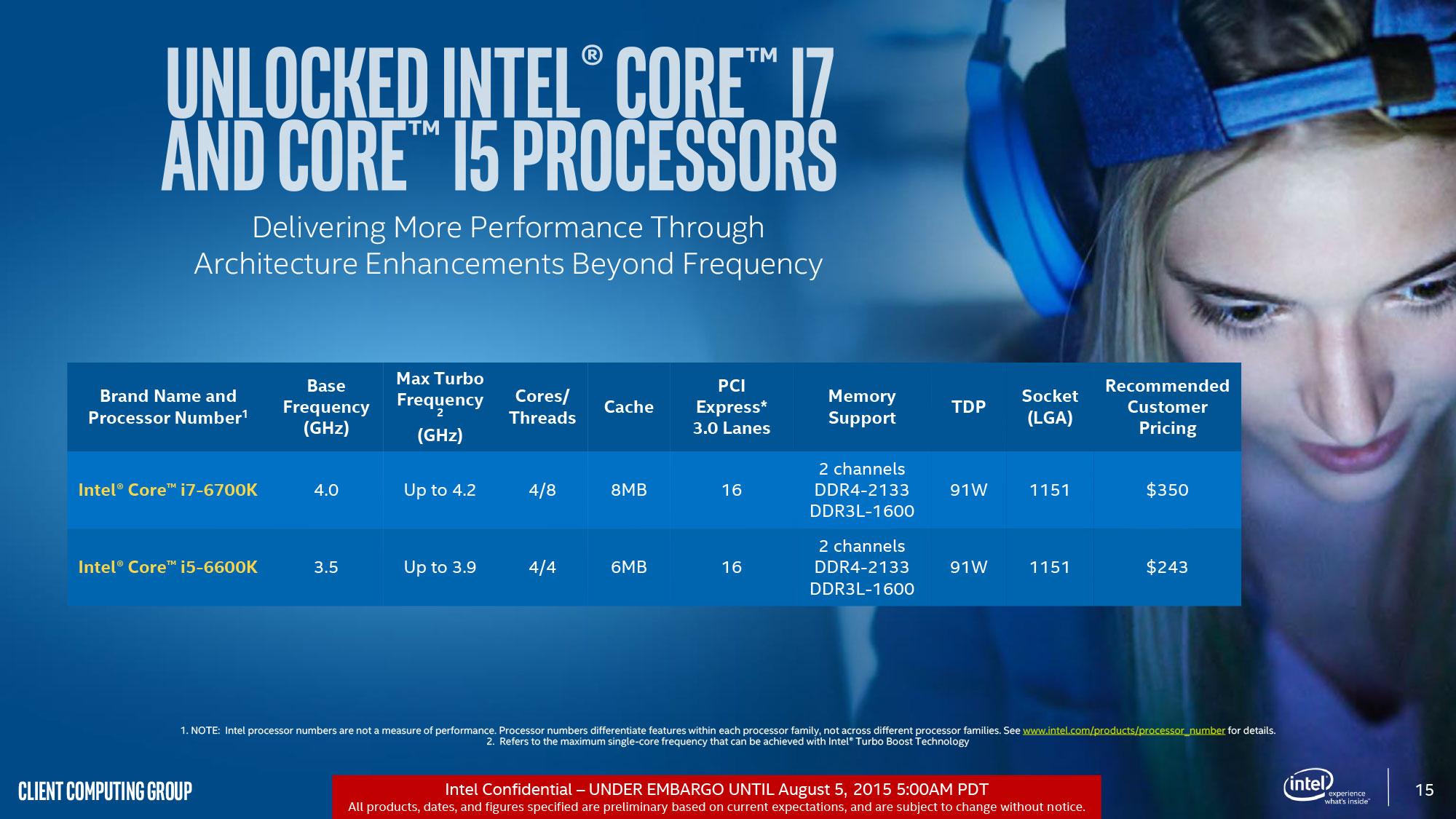 Finally, look at that price. With the Core i7-4790K selling today for $339, Intel is listing the tray price of the Core i7-6700K at $350! And, after the initial launch excitement, you can expect this price to settle another $10-20 down. Of course this will require you to upgrade your motherboard as well as your system memory so the total upgrade cost is going to be higher but Intel seems to be reaching out olive branches in several areas with today's announcement. I know more than a handful of PC gamers that will be using this opportunity to upgrade from aging Sandy Bridge / Ivy Bridge systems so the price to entry is a welcome data point.

Though I am focusing on the Core i7-6700K for today's story as that was the sample we were sent, Intel is also pushing out a Core i5-6600K today with a price of $243. That CPU will run four cores without HyperThreading, a base clock of 3.5 GHz and a maximum Turbo clock of 3.9 GHz. Other than the 6MB of cache (as opposed to 8MB) the rest of the specifications and capabilities remain unchanged. 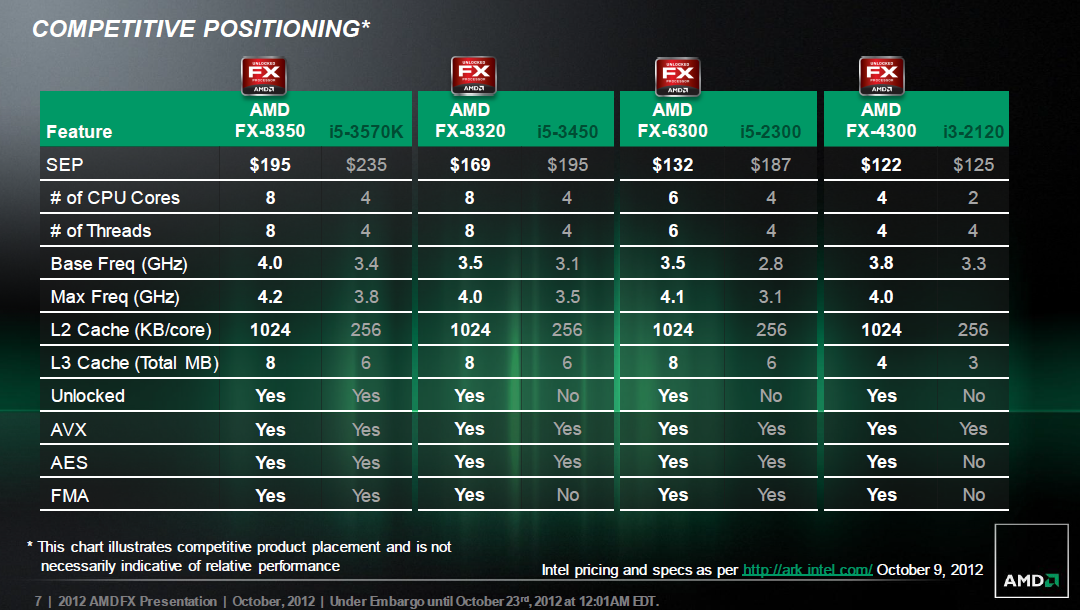 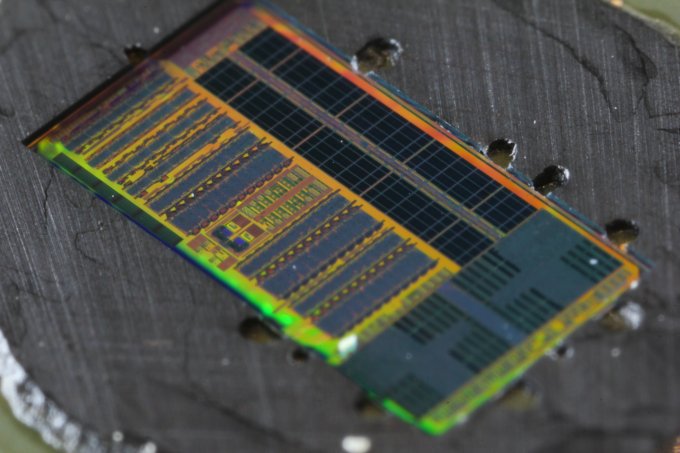