The Maxwell architecture really improved on power efficiency across the board with its introduction.  While NVIDIA did not skimp on performance and features, we certainly can tell that they spent a lot of time and design resources to drop TDPs and power consumption.  It has certainly proven to be a sticking point for those looking at the AMD offerings like the new R9 390 and 390X which still pull plenty of power. 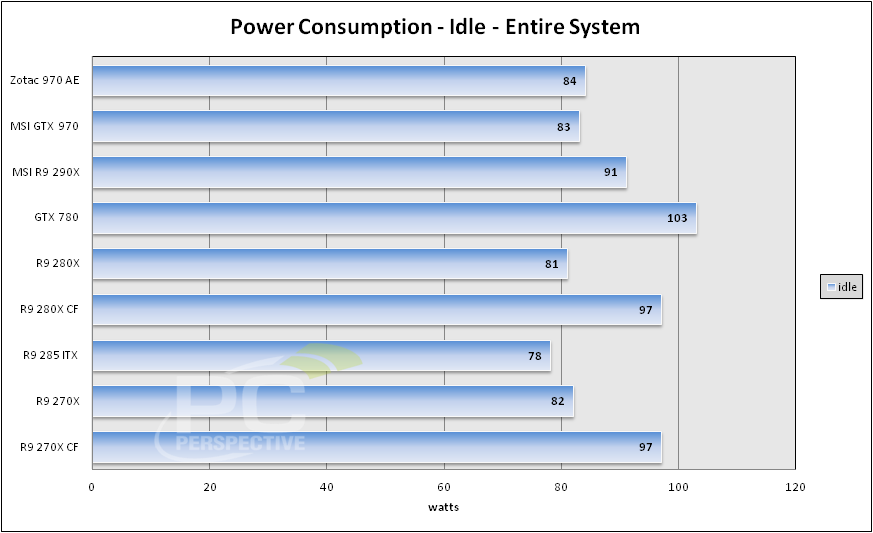 At idle the two 970 boards are doing very well.  Only the older 280x and the newer R9 285 are lower, but not by all that much.  The GTX 780, based on the last generation architecture, leads the group with the highest idle power consumption. 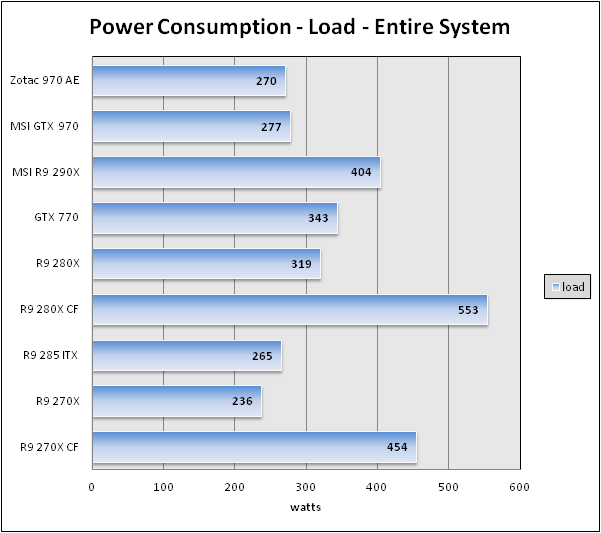 The load results are pretty impressive for a variety of reasons.  The older 290x sucks down the juice in single GPU rendering.  The Zotac is 7 watts lower than the MSI board, so we can see that even though the Zotac is higher clocked, it still pulls less power than its lower clocked MSI 970 stablemate.  Perhaps most disappointing is that the R9 285 pulls nearly as much power as the much faster 970 boards.

There are a lot of really good coolers that I have listed here.  I do not believe any of them are stock or reference units.  This will certainly tell us if that extra investment in extreme cooling makes much of a difference here. 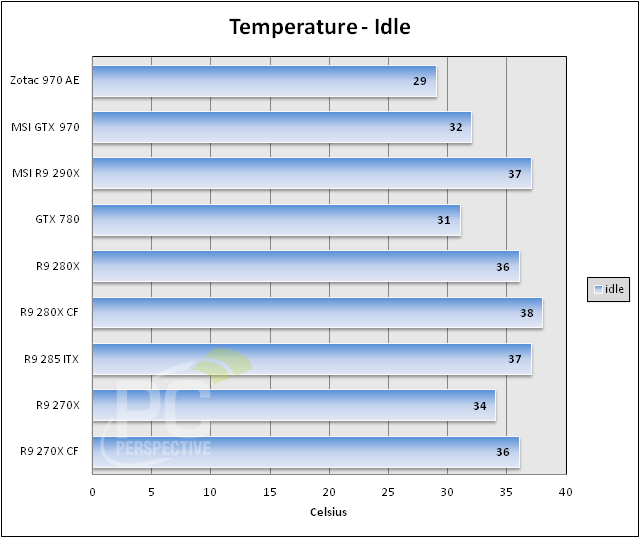 Idle temperatures are all very reasonable, but the Zotac unit is almost downright frigid.  That is of course an exaggeration, but it is much lower than all the rest. 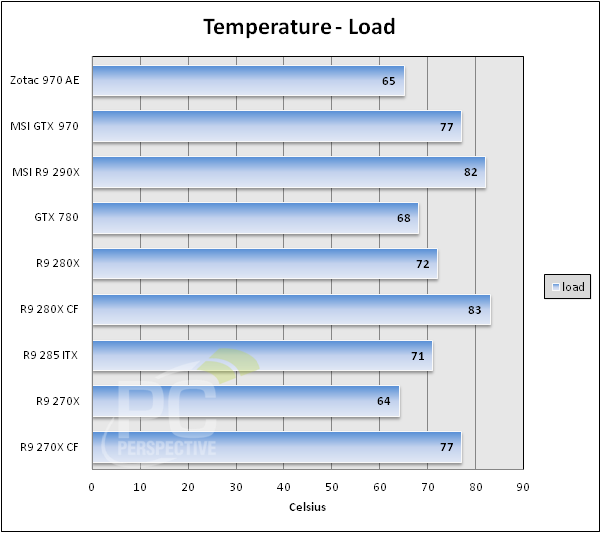 At load the Zotac is 12C cooler than the MSI 970 card and is the second coolest of the bunch.  The only one coolers is the Asus R9 270X DCII.  The temps on the Zotac card are just plain impressive considering again the level of overclocking that it has been given.

I was unable to adjust the voltage on my particular sample with the Afterburner utility, but others might find luck with updated utilities that can adjust that particular function. 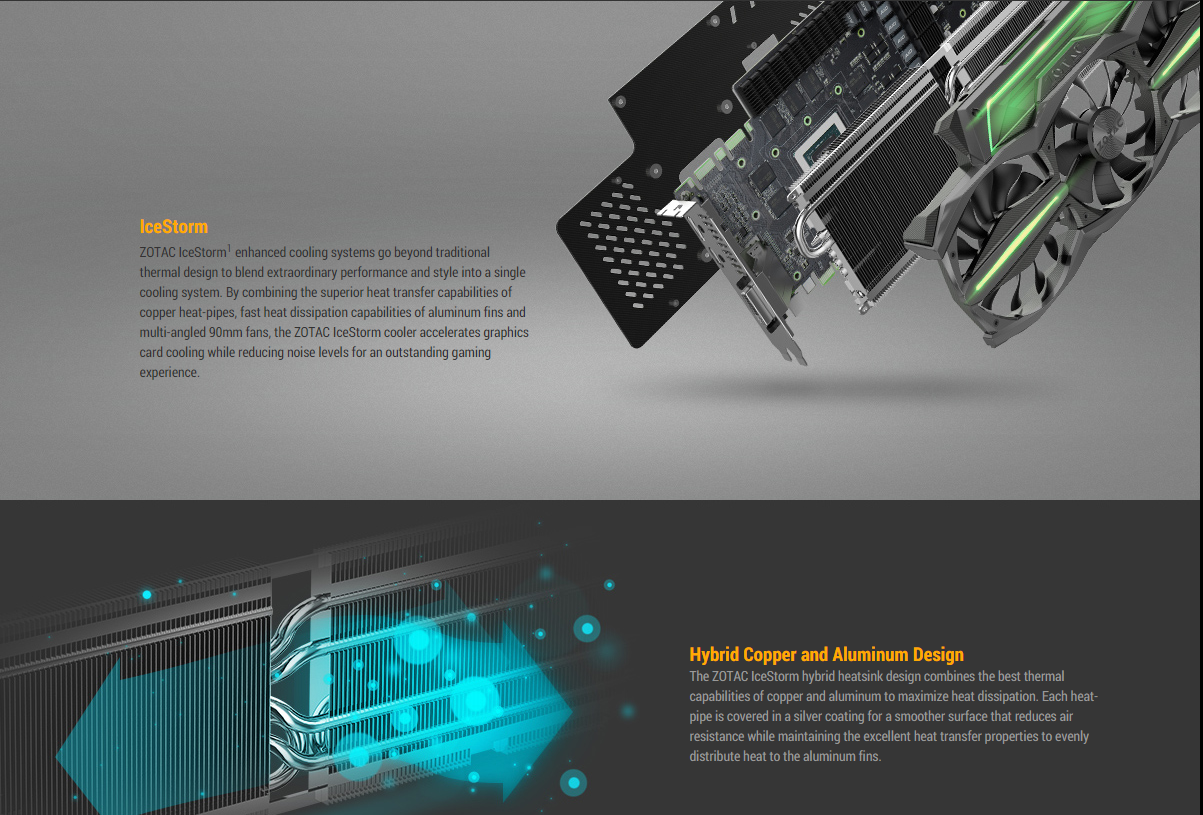 IceStorm keeps the card extremely cool, but my sample just wasn't the overclocking monster that I had hoped for.

Memory overclocking also did not achieve anything spectacular in this case.  I was able to take it from 7200 MHz to 7400 MHz without much of a problem, but artifacts started popping up shortly after that point.

I am not surprised by these results as Zotac has already pushed the clocks on this board much higher than what the reference board calls for.  It in fact outstrips most of the other pre-overclocked boards out there in terms of overall base and boost clockspeeds.  This is certainly a good card, but it just did not have much extra room for overclocking. 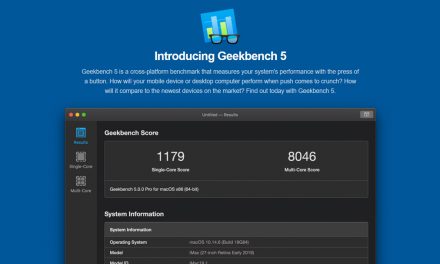 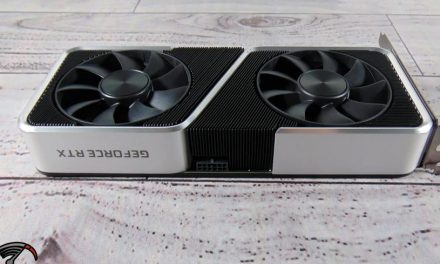