A GPU with attached closed-loop liquid cooler is a little more mainstream these days with AMD's Fury X a high-profile example, and now a partnership between Corsair and MSI is bringing a very powerful NVIDIA option to the market.

The new product is called the Hydro GFX, with NVIDIA's GeForce GTX 980 Ti supplying the GPU horsepower. Of course the advantage of a closed-loop cooler would be higher (sustained) clocks and lower temps/noise, which in turns means much better performance. Corsair explains:

Liquid cooling keeps the card’s hottest, most critical components – the GPU, memory, and power circuitry – 30% cooler than standard cards while running at higher clock speeds with no throttling, boosting the GPU clock 20% and graphics performance up to 15%.

The Hydro Series H55 micro-fin copper cooling block and 120mm radiator expels the heat from the PC reducing overall system temperature and noise. The result is faster, smoother frame rates at resolutions of 4K and beyond at whisper quiet levels."

The factory overclock this 980 Ti is pretty substantial out of the box with a 1190 MHz Base (stock 1000 MHz) and 1291 MHz Boost clock (stock 1075 MHz). Memory is not overclocked (running at the default 7096 MHz), so there should still be some headroom for overclocking thanks to the air cooling for the RAM/VRM. 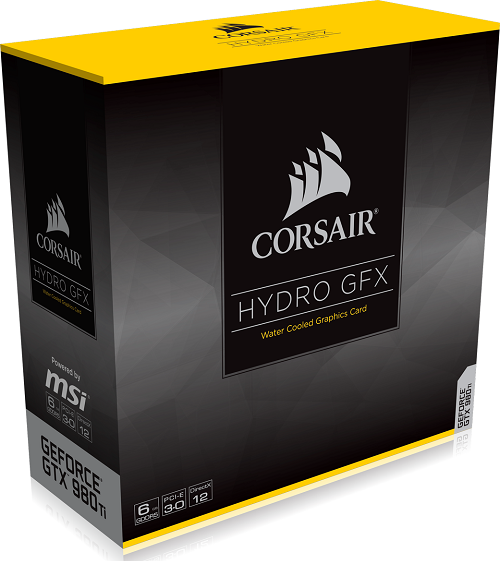 A look at the box – and the Corsair branding

As far as pricing/availability goes Corsair says the new card will debut in October in the U.S. with an MSRP of $739.99.