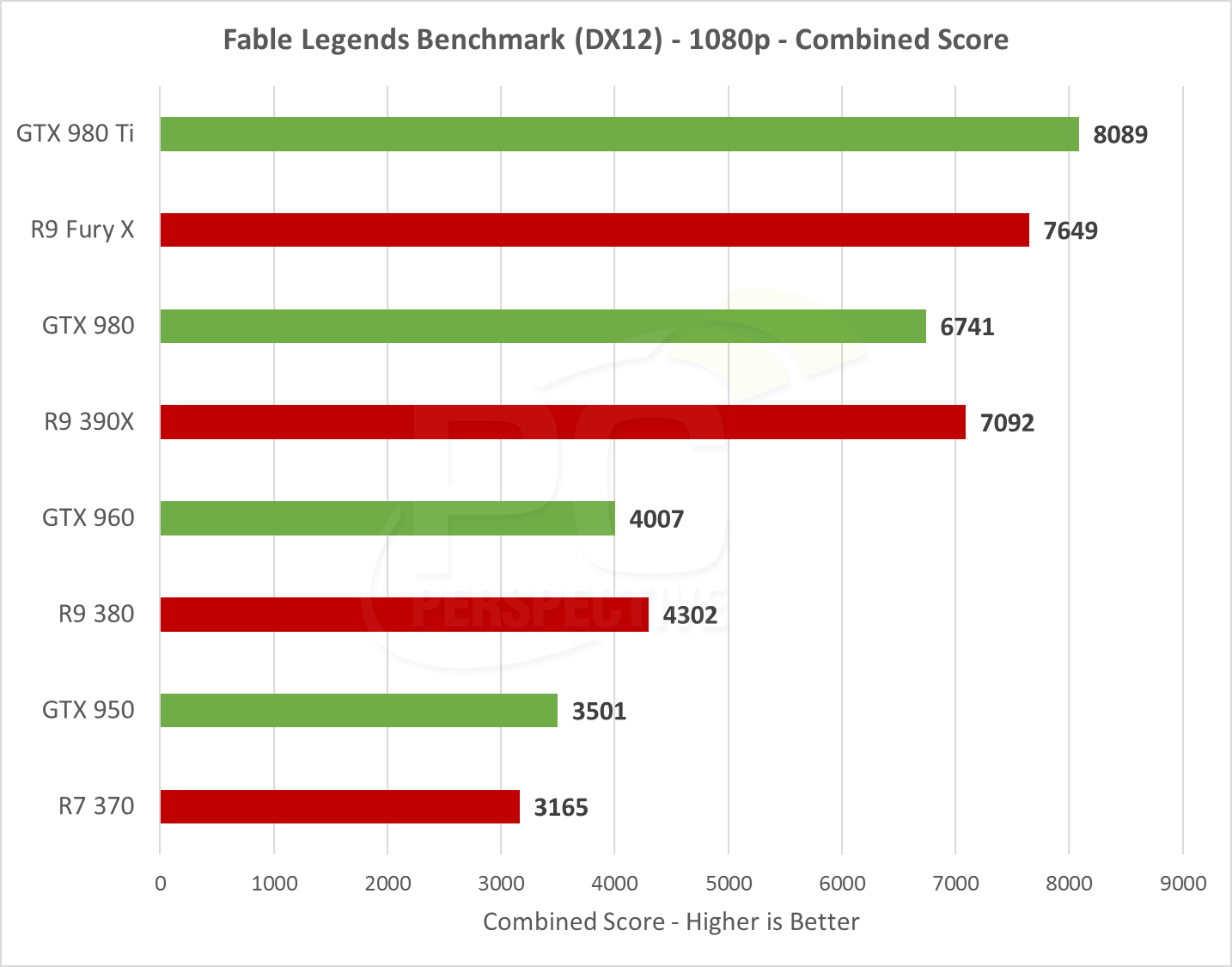 The combined score for the Fable Legends benchmark is simply the average frame rate of the whole test multiplied by 100, but the larger number helps make writing about and talking about comparisons a bit easier. The GTX 980 Ti comes in with our best score, 8089, a full 5.7% faster than the Fury X from AMD. The GTX 980 does fall behind the R9 390X though by nearly the same margin (5.2%) and the R9 380 is 7.3% faster than the GeForce GTX 960. NVIDIA once again takes the lead with our lowest cost GPUs tested today with the GTX 950 running 10% faster than the R7 370. 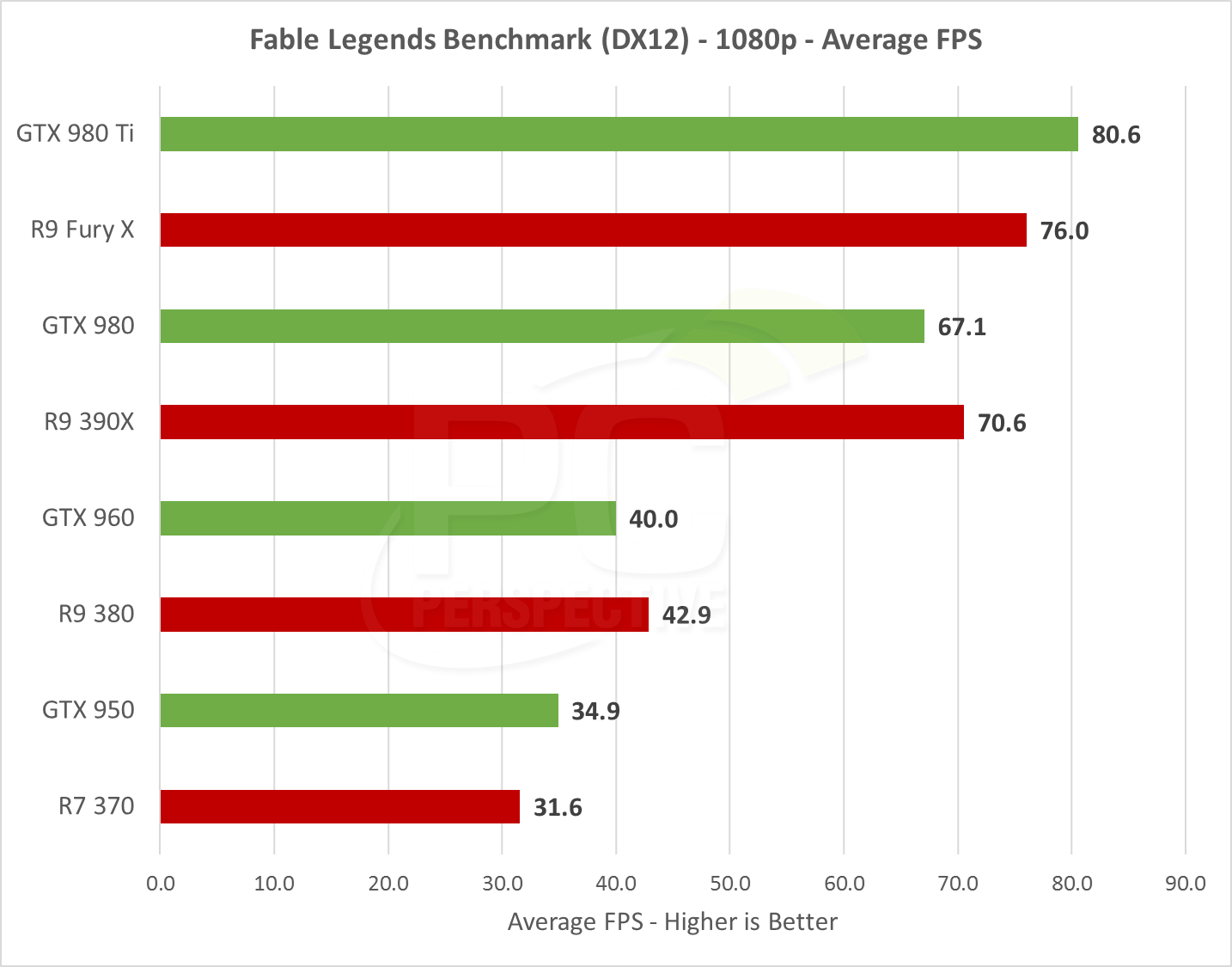 You may notice that our average FPS scores in this graph do not perfectly match the scores above. Rather than simply take the combined score above and divide by 100, these averages are computed using the frame times provided by the CSV output files from the benchmark runs themselves. They are all REALLY close though and the results mirror what we showed you above. 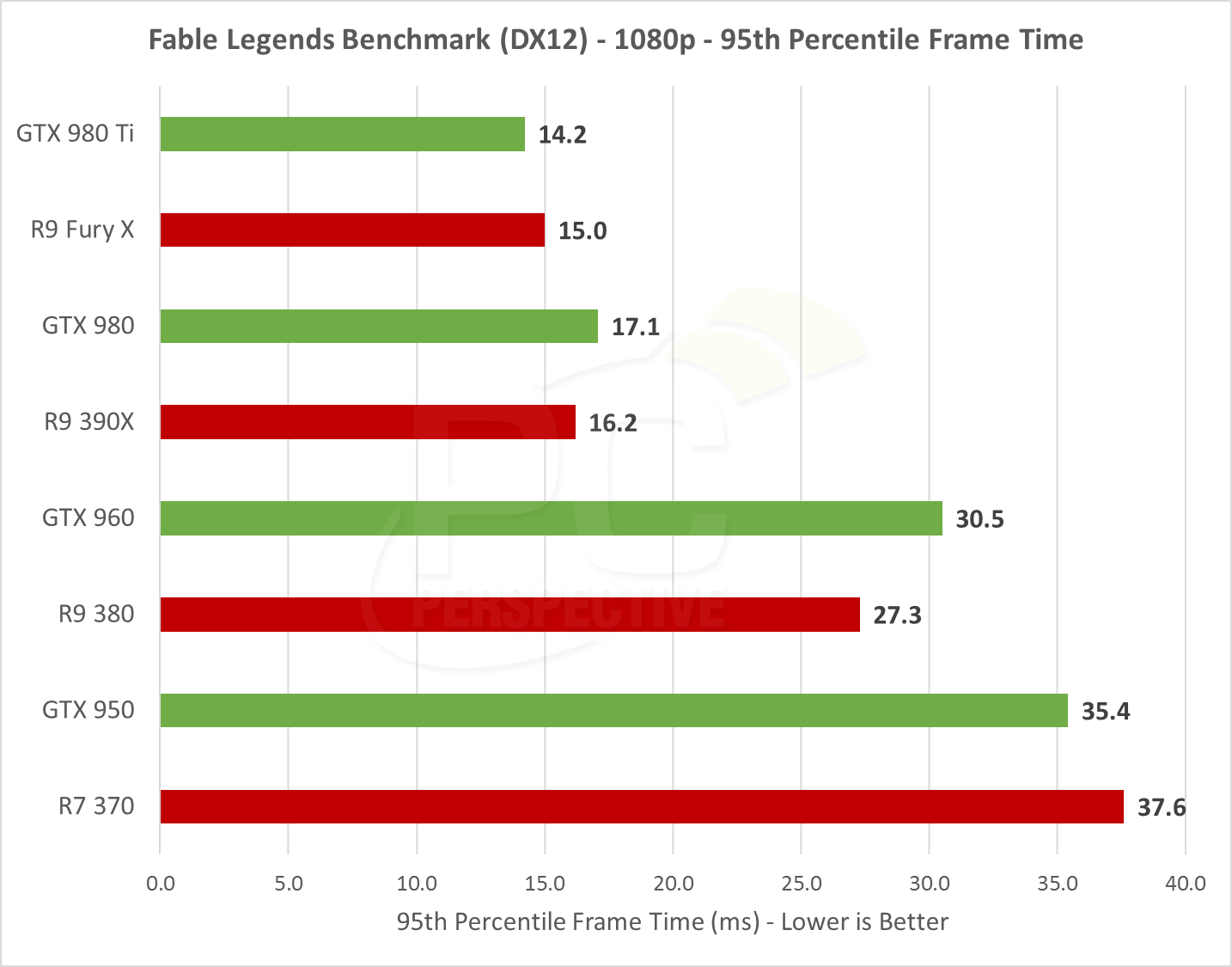 Since we have access to the frame times it seemed pertinent to provide the 95th percentile frame times (not frame rates) to see if anything changes in terms of GPU to GPU comparisons. The AMD Radeon R9 Fury X looks like it closed the gap a little bit here, indicating that the GTX 980 Ti has a bit more variance in its highest 5% of frame times. The GTX 960 / R9 380 comparison also leans a bit more in favor of the Radeon hardware when looking at frame times in this manner. 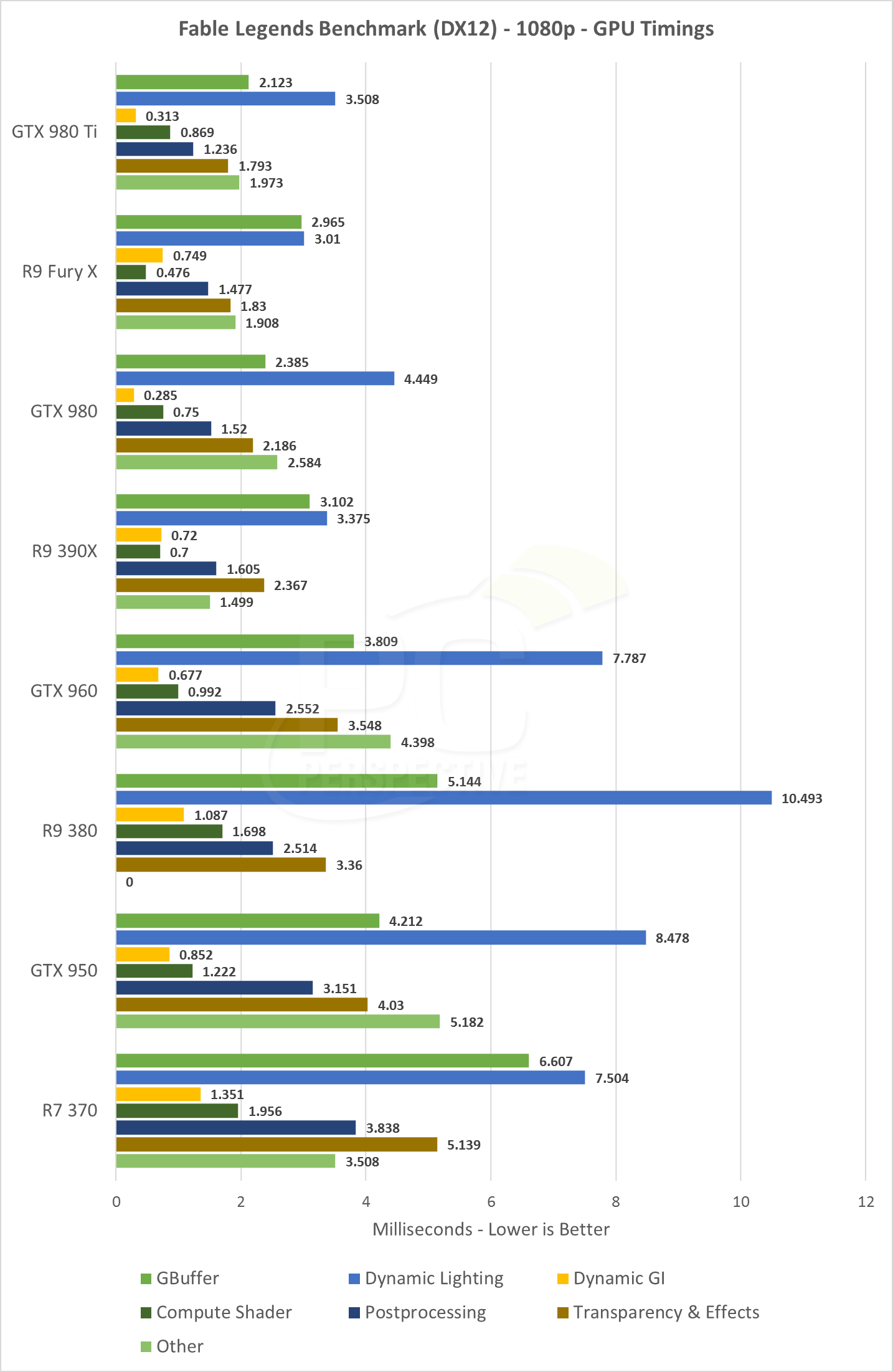 There is a lot of data here but at least a handful of results that piqued my interest. First, the performance of the Global Illumination pass is consistently faster on the GeForce GTX GPUs when compared to the similar segment Radeon. The GTX 980 Ti is more than 2x faster than the Fury X in that particular step, for example, though AMD's Fiji GPU has the edge when we look at standard shadow mapping and direct lighting.

The Radeon R9 380 had an interesting goose egg (score of 0) for the "other" results which might make the data a bit misleading; that's also the only instance where the AMD GPU is not faster than the NVIDIA GPU in dynamic lighting.

And now for something a little different. I have provided for you below a collection of four frame time comparison graphs (GTX 980 Ti vs. R9 Fury X, etc.) that we like to provide in these kind of performance analysis articles. However, we are working on something brand new here at PC Perspective – dynamic and interactive graphs – and I thought today's story is as good of a place to test it as any.

So, if you want the standard frame time, static graphs, simply scroll down to view the AMD vs GPU comparison as you are used to seeing them. However, if you want to try out something new, click here: 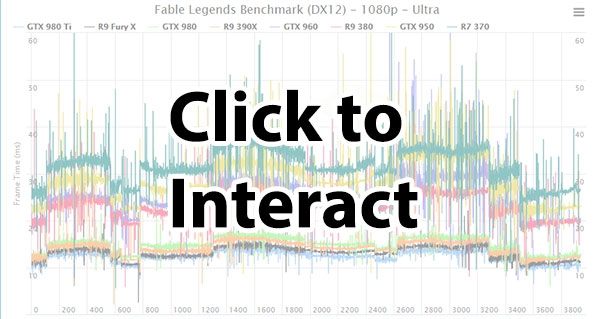 Play around with that and let me know what your thoughts are on the presentation in the comments below! 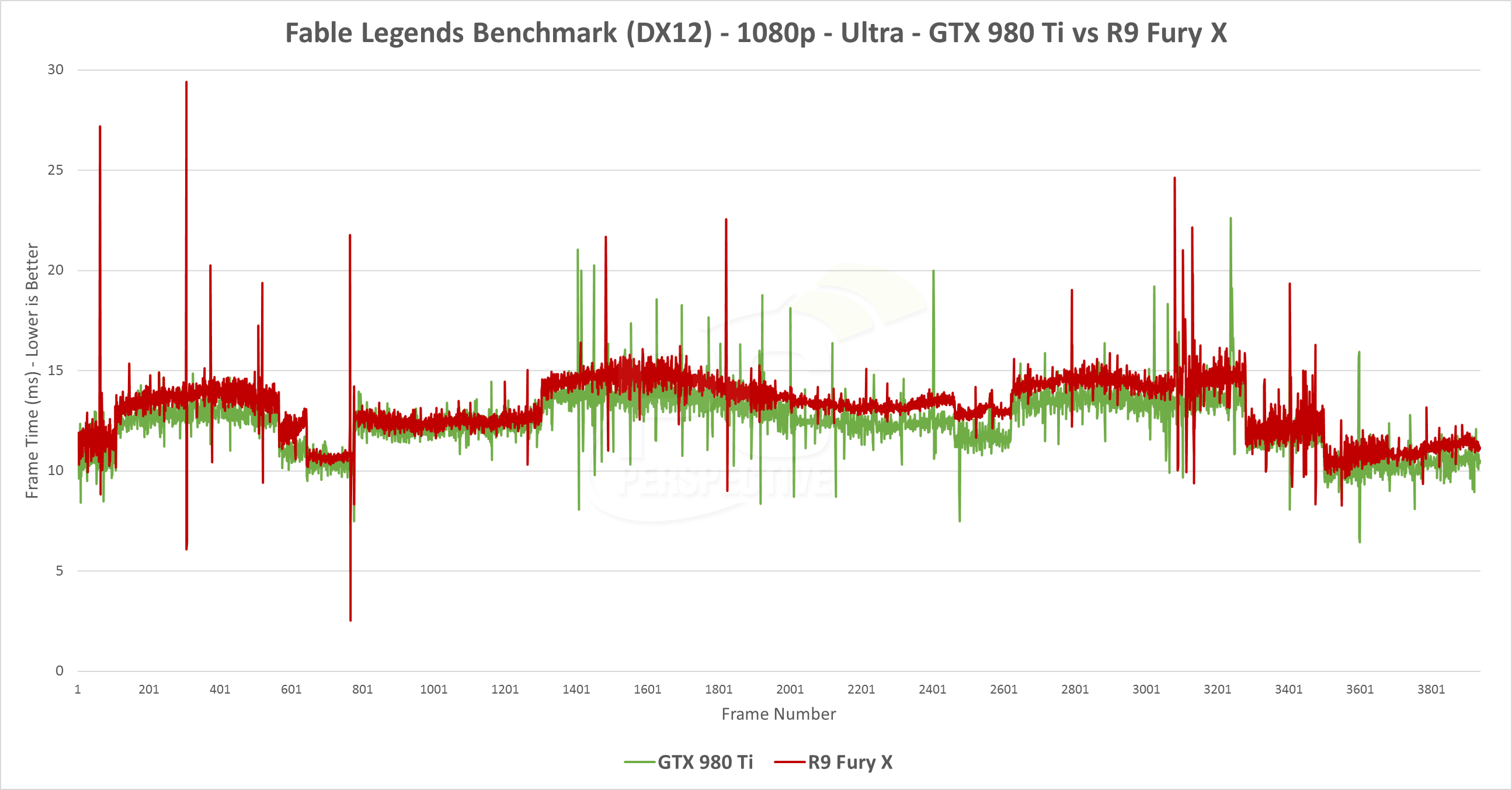 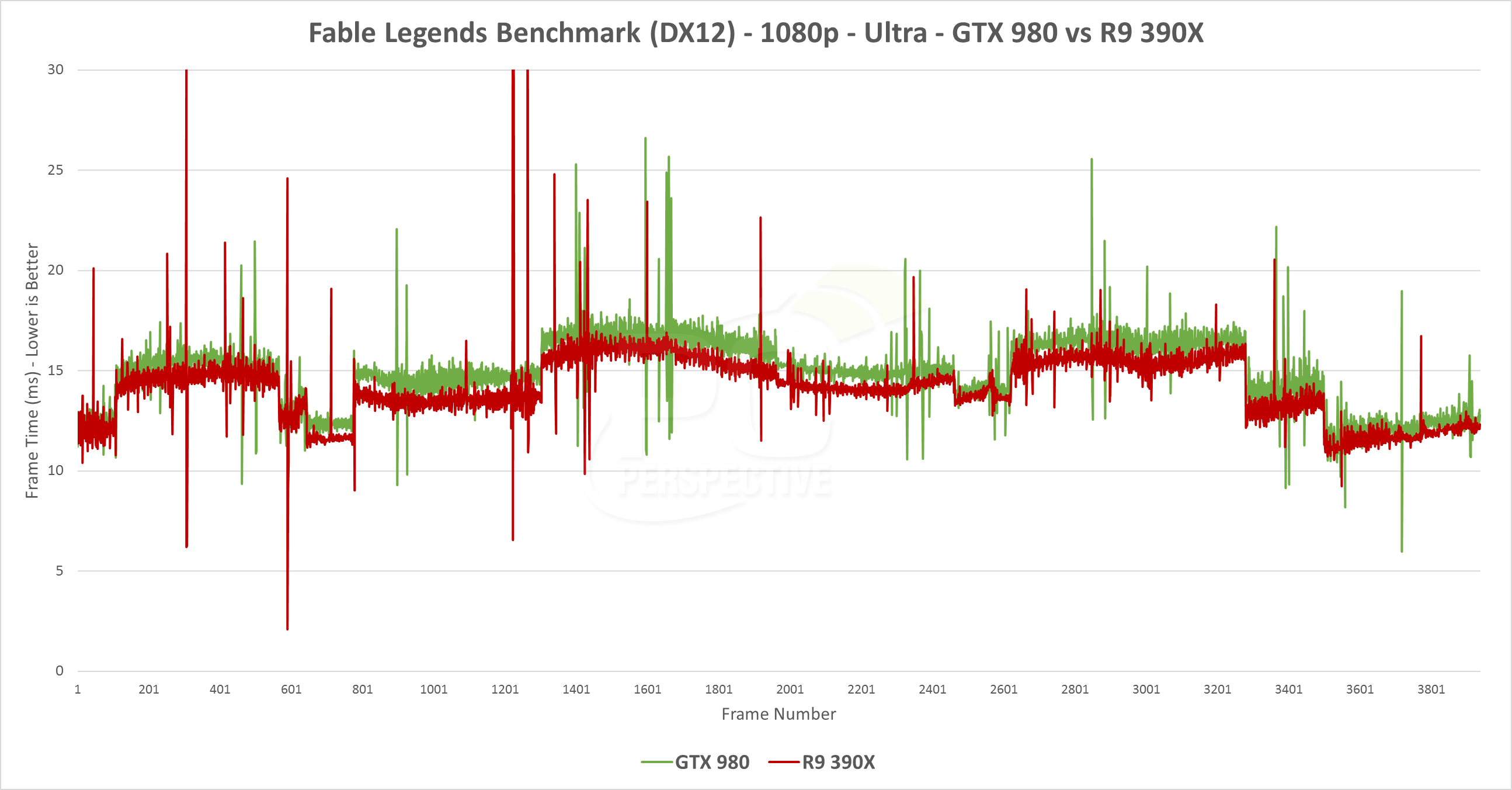 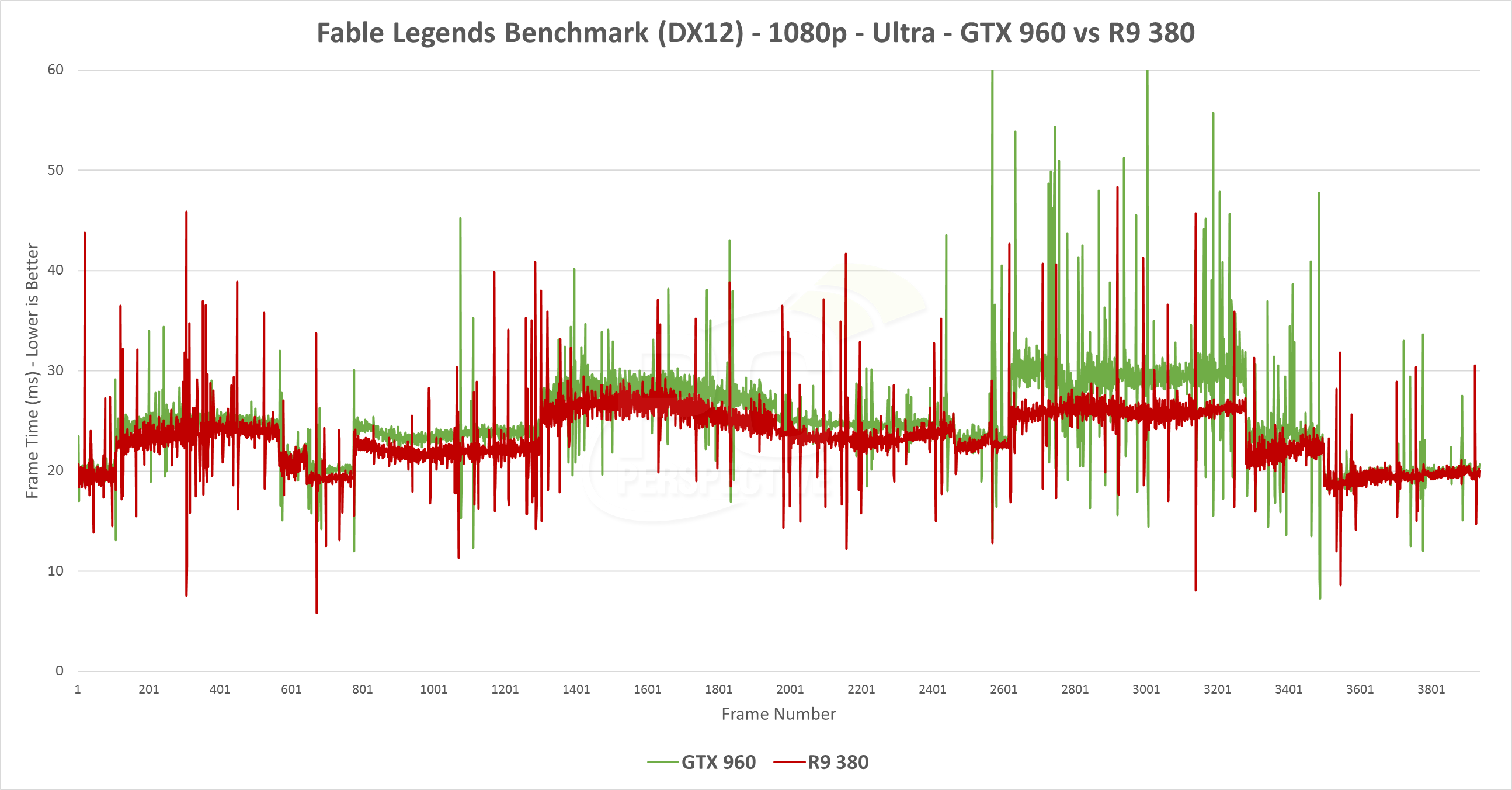 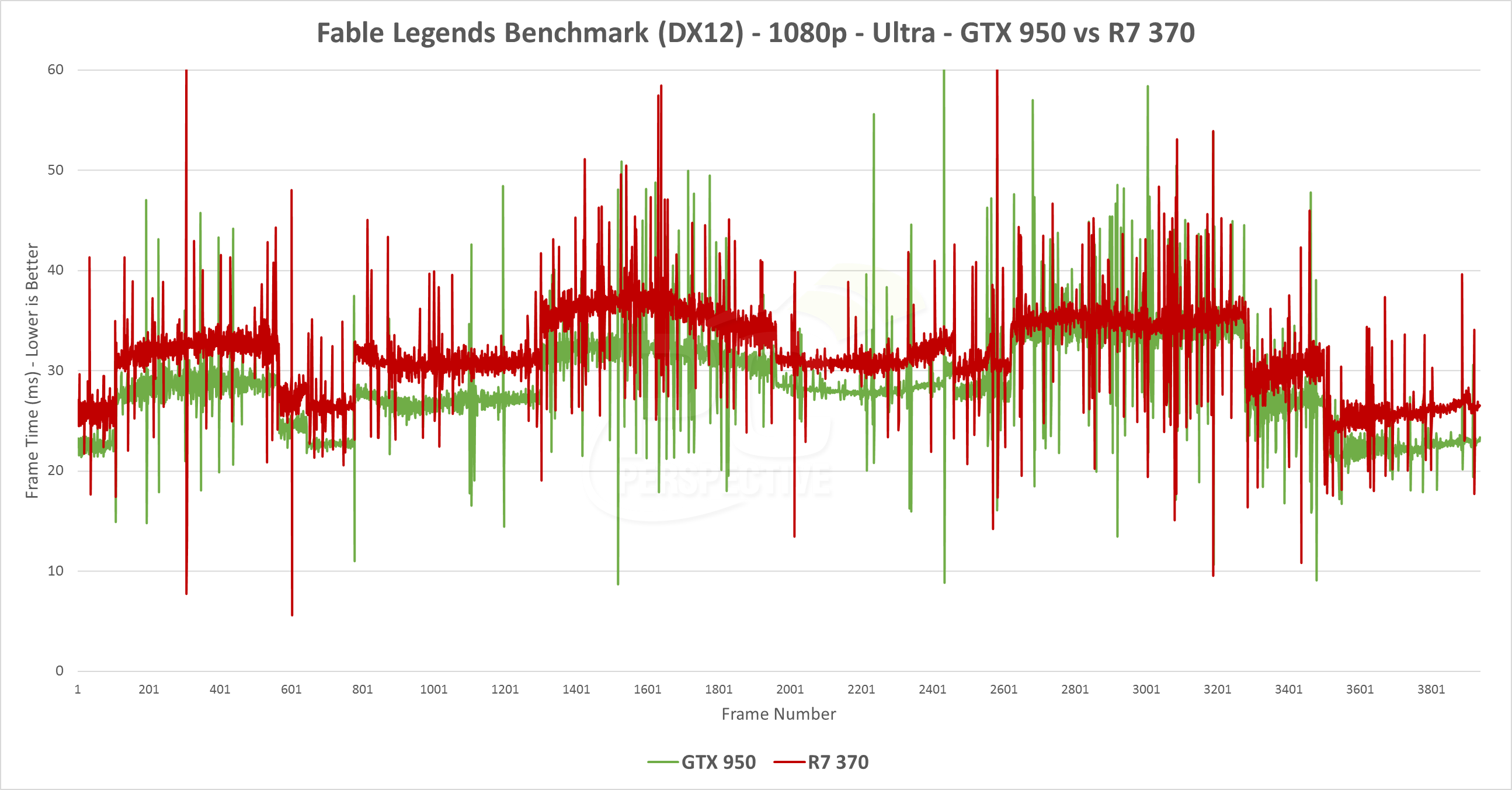 At 1080p, the top four performing cards show very consistent frame times and very little variance or peaks. As you move to lower performing hardware though you start to see some instances of longer frame times and more variant frame times in succession – a sort of back and forth oscillation. With average frame rates for the GTX 950 and R7 370 hovering in the 30-35 FPS range, we are clearly seeing the GPU workload of Fable Legends at 1080p/Ultra pushing these cards boundaries.

King of the valley