AM3+ Keeps Chugging Along

Consumers cannot say that MSI has not attempted to keep the AM3+ market interesting with a handful of new products based upon that socket.  Throughout this past year MSI has released three different products addressing multiple price points and featuresets.  The 970 Gaming was the first, the 970 KRAIT introduced USB 3.1 to the socket, and the latest 990FXA-Gaming board provides the most feature rich implementation of the socket plus USB 3.1.

AMD certainly has not done the platform any real favors as of late in terms of new CPUs and architectures to inhabit that particular socket.  The last refresh we had was around a year ago with the release of the FX-8370 and 8370e.  These are still based on the Piledriver based Vishera core that was introduced three years ago.  Unlike the GPU market, the CPU market has certainly not seen the leaps and bounds in overall performance that we had enjoyed in years past.

MSI has taken the now geriatric 990FX (based upon the 890FX chipset released in 2010- I think AMD might have gotten their money out of this particular chipset iteration) and implemented it in a new design that embraces many of the top end features that are desired by enthusiasts.  AMD still has a solid following and their products are very competitive from a price/performance standpoint (check out Ryan’s price/perf graphs from his latest Intel CPU review). 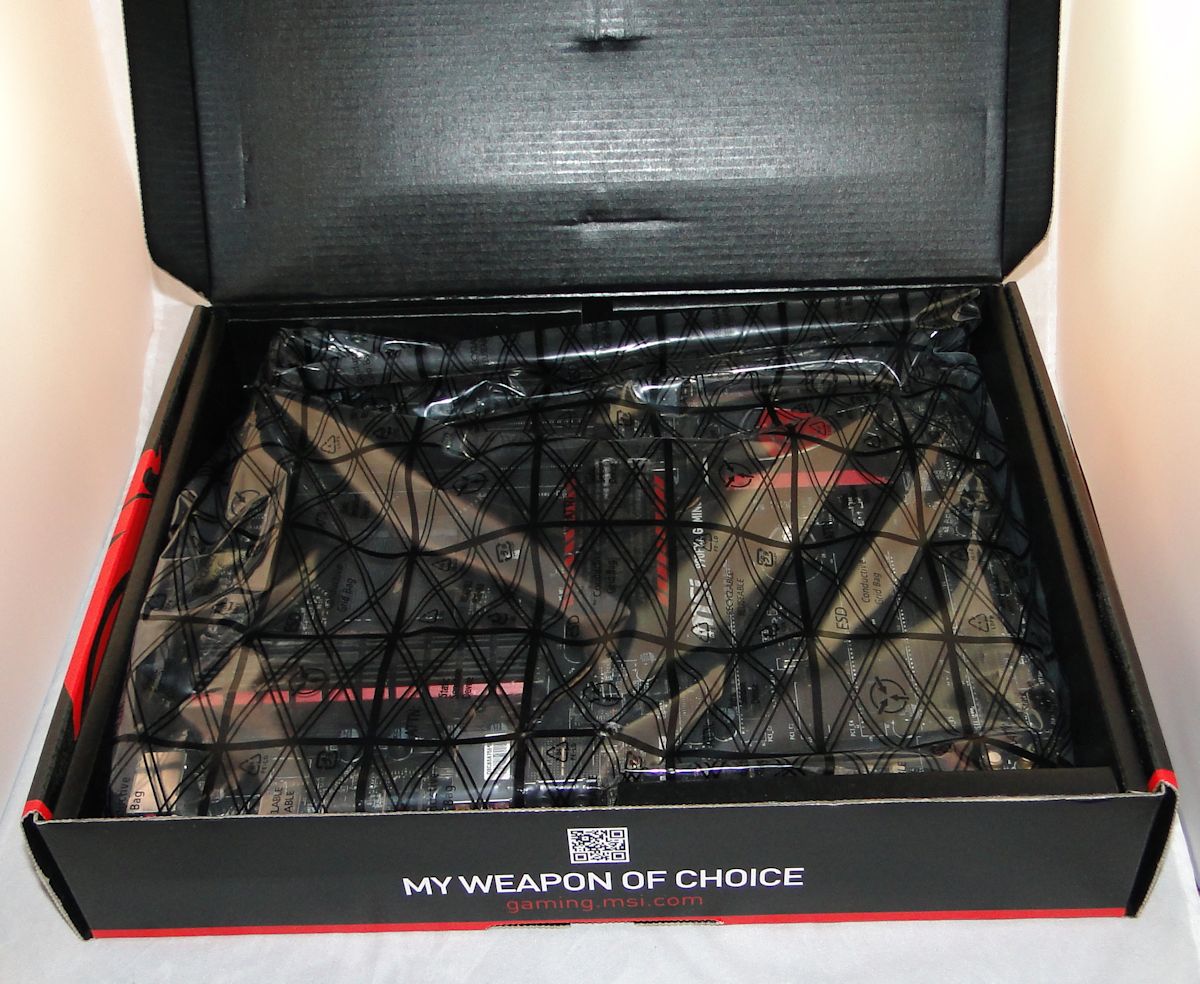 The packing material is pretty basic. Just cardboard and no foam. Still, fits nicely and is quite snug.

The idea behind the 990FXA-Gaming is to provide a very feature-rich product that appeals to gamers and enthusiasts.  The key is to provide those features at a price point that will not scare away the budget enthusiasts.  Just as MSI has done with the 970 Gaming, there were decisions made to keep costs down.  We will get into these tradeoffs shortly.

The MSI Gaming line of motherboards are visually quite appealing while embracing a host of features that should garner a lot of attention from those looking for a higher end experience.  Unlike video cards, users typically hold onto a motherboard for several years.  Add in the fact that AMD has yet to provide a high end replacement for the FX-8350/8370, the replacement cycle for AMD parts is stretched even further.

The first thing we need to discuss here is the price.  The official MSRP of the board is $149.99 US.  This is a little higher than most buyers in this category would want to pay, but it is lower than some of the top end models featuring this chipset and matching the extras provided on the board.  The Asus Crosshair V FZ is in the $229 range, but it does not feature USB 3.1 support.  The latest ASRock 990FX with USB 3.1 is $164.99.  Checking online pricing we see the MSI board often discounted to the $129.99 level.  This is a pretty solid discount considering most of the features on this particular board. 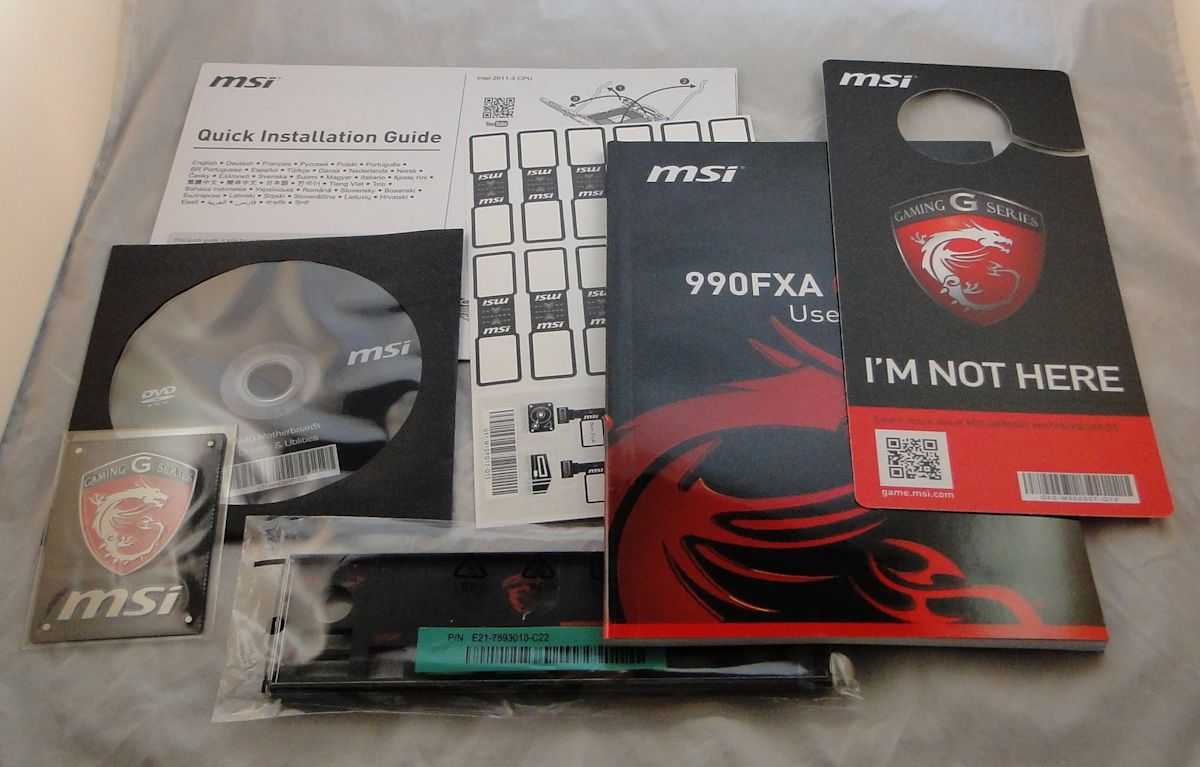 The bundle is not extensive, but it is better than the bare basics. Not shown here are the SATA cables included. The badge is a nice metal piece and quite solid.

The board looks like it means business.  The black and red gaming motif that MSI has applied to this board matches that of their other Gaming series from both Intel and AMD.  The look is mean and understated.  The red provides a nice accent without being garish.  The red LED line that differentiates the audio portion with the rest of the board is a nice touch that we have seen from a variety of other boards.  The heatsinks are large and well constructed with heatpipes helping to spread out the load between the VRMs, northbridge, and southbridge.

Audio Boost 2 is MSI’s higher end integrated audio implementation.   It physically separates the traces from the rest of the motherboard and gives it separate filtered power and ground layers.  This is aimed at improving signal quality by separating it from the rest of the electrically noisy motherboard.  In theory it should help quite a bit, and is now a common features on many enthusiast class boards.  The board has the Realtek ALC1150 codec under the EMI shield.  MSI ups the ante by surrounding the audio portion with high quality Nichicon audio grade capacitors.  Furthermore MSI also utilizes a pair of headphone amplifiers that power the rear and front audio headers.  In the case of a speaker system being plugged into the back, there is some autosensing going on and it disables the amplification.  MSI implements gold plated connectors for both the mini-jacks in the back and the front audio panel plug.  Rounding everything out is the inclusion of the Creative SoundBlaster Cinema 2 software suite which uses CPU cycles to apply effects and audio processing (if a user desires that particular functionality- it is easily disabled and reconfigured to tastes).

The next feature added to the mix is that of the somewhat controversial Killer Ethernet implementation.  The basis for this is an Atheros Gig-E chip with the Killer software applied on top of the driver.  There are those that do not like the implementation at all, but there are also those who appreciate the extras provided by that software layer (basic QoS, monitoring, etc.).  Users have the option to install the driver only or the entire software suite.  Mileage will obviously vary on that one.  Nevertheless, it is a solid chip and the software is minimally invasive and annoying. 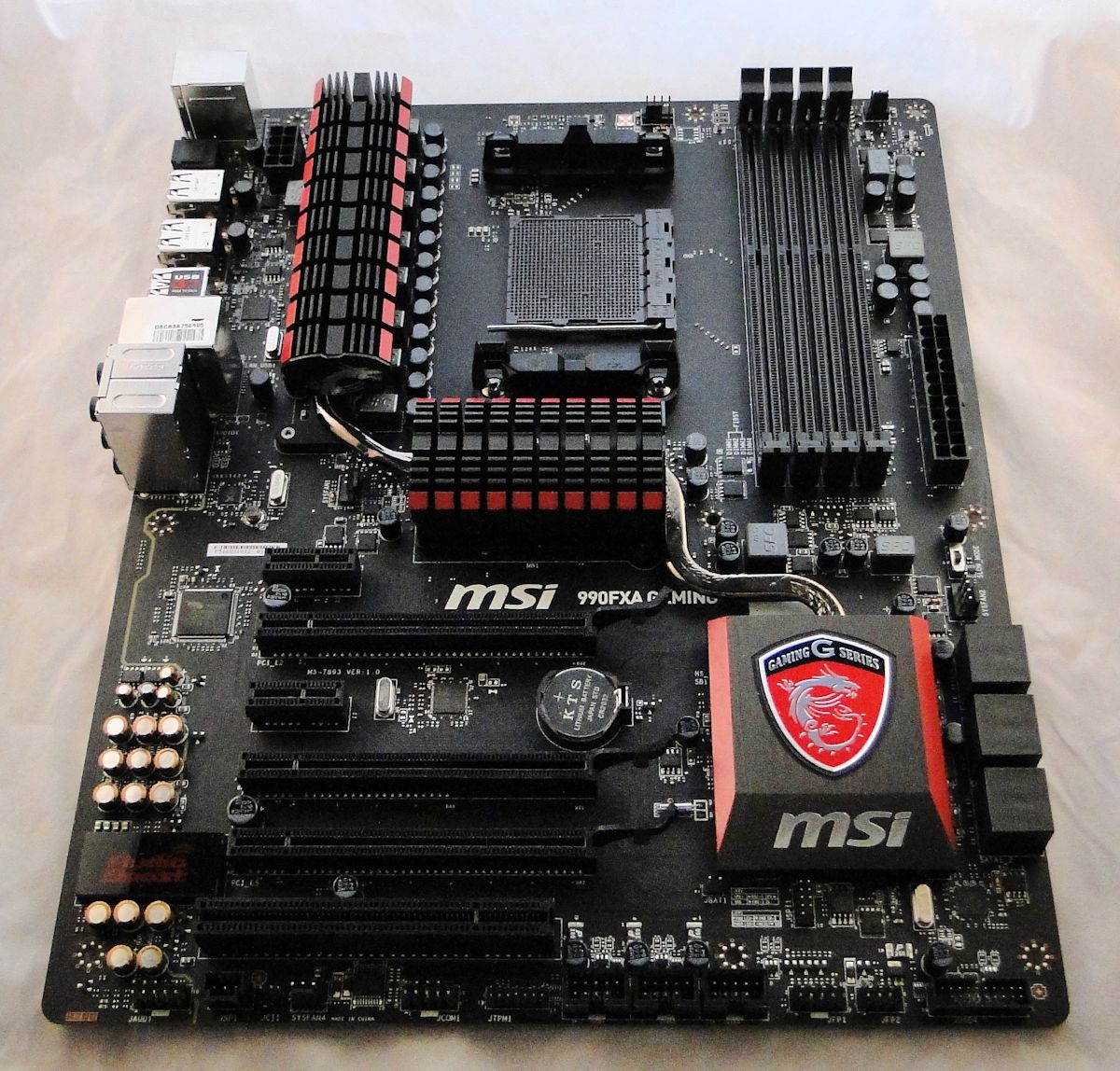 The board is laid out very nicely and the color scheme is striking, but not garish.

The firmware is based on the latest ClickBIOS 4 which features a nice graphical interface and a huge variety of settings to go through and tweak.  The layout is logical and easy to access, plus the granular ability to tweak settings is impressive.  Fan control is mature and easy to adjust.  The most interesting aspect is that this board appears to natively support DDR-3 2133 memory.  The FX series of chips are only officially support DDR-3 1866 speeds, but somehow MSI has exposed a higher divider.  I was able to run DDR-3 2133 memory while still keeping the base clock at 200 MHz.  I was never able to get a concrete answer out of MSI, but the board ran stable at that setting.

Auto overclocking is another included feature on this board, and it is an easy way to get a few extra MHz out of a CPU.  It does not provide the same results as a user taking the time to thoroughly test and tweak their machine to find the sweet spot in voltage, speed, and overall performance.  The auto setting does raise voltage quite a bit, but the overall overclock is fairly modest and typically takes the 4 GHz FX-8350 to around 4.4 GHz.  A far cry from the 4.8 to 5 GHz results most other users can get to with good cooling and some patience.