Over the past 2 years or so we have noticed a trend in PC gaming: more and more gamers are realizing the importance of the display in the total gaming experience. Having been in the reviews game for nearly 16 years, I am just as guilty as most of you reading this of falling into the trap of "good enough" monitors. Steam surveys and our own data from readers shows that most of you have found some form of 1920×1080 screen and have stuck with it. But the truth is changing your monitor can and will dramatically impact how you game, how you work and just how impressed you feel each and every time you sit down in front of your PC. 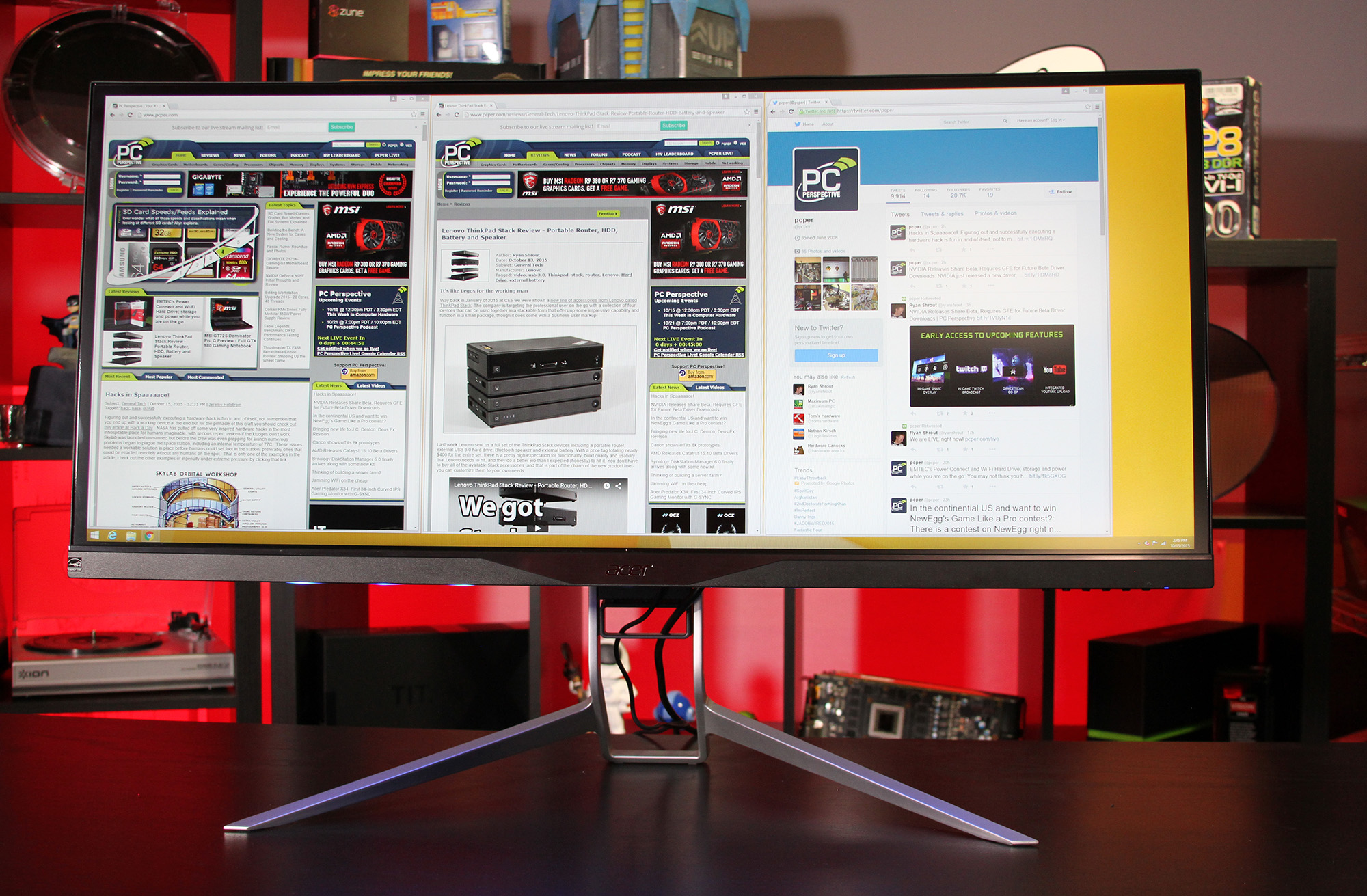 Today we are looking at one of the monitors that promises to change how you view productivity and gaming. The Acer XR341CK continues the momentum of a new aspect ratio of monitors, 21:9. Otherwise known as UltraWide displays, they are available in both 2560×1080 and 3440×1440 resolutions, though our testing model today uses the latter, larger option. This Acer has a slight curve to it as well, just enough to be enjoyable without changing viewing angles for the primary user. With a 34 inch diagonal measurement, IPS panel technology and AMD FreeSync variable refresh rate support, the Acer XR341CK is likely to be our new favorite monitor for AMD Radeon users.

This doesn't come without a cost though: the XR341CK retails for just over $1,000 on Amazon. For many of you that will be a breath-taking price, and not in a good way. But consider the length of time that users tend keep monitors, I think we can make the case that type of investment is actually worthwhile.

For some reason, Acer really doesn't like to update its website with information and specifications for monitors in its lineup. But let's dive into the detail we have about the Acer XR341CK.

The first thing that I noticed after taking the Acer XR341CK out of the box was its physical appearance. It's sleek, sexy and very modern looking; there aren't any flimsy black plastic pieces or wobbly stands to be seen. 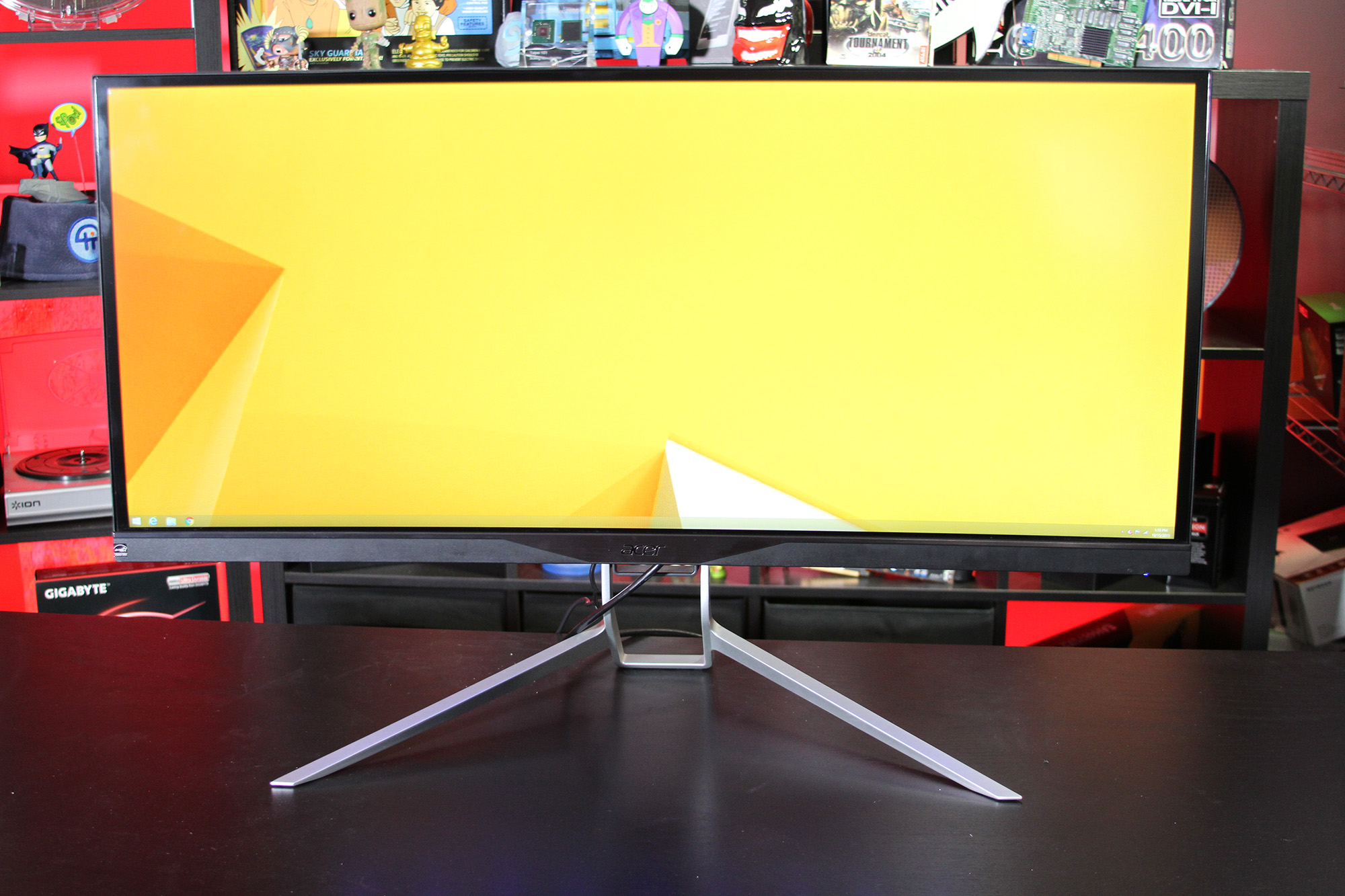 If you haven't been in a room with a 21:9 display yet the wide aspect ratio can be quite a shock at first glance. A typical 16:9 video played back at fullscreen will give you vertical black bars for spacing on either side, which is a drawback, but for gaming and productivity, there are very few display options that can match the balance these have. The stand, with is brushed metal finish and the thin bezel surrounding the panel give the monitor a "high tech" feel that will impress visitors.

With a true IPS panel powering the XR341CK, viewing angles are spot on and color shift when moving around the panel in different directions is basically nonexistent. 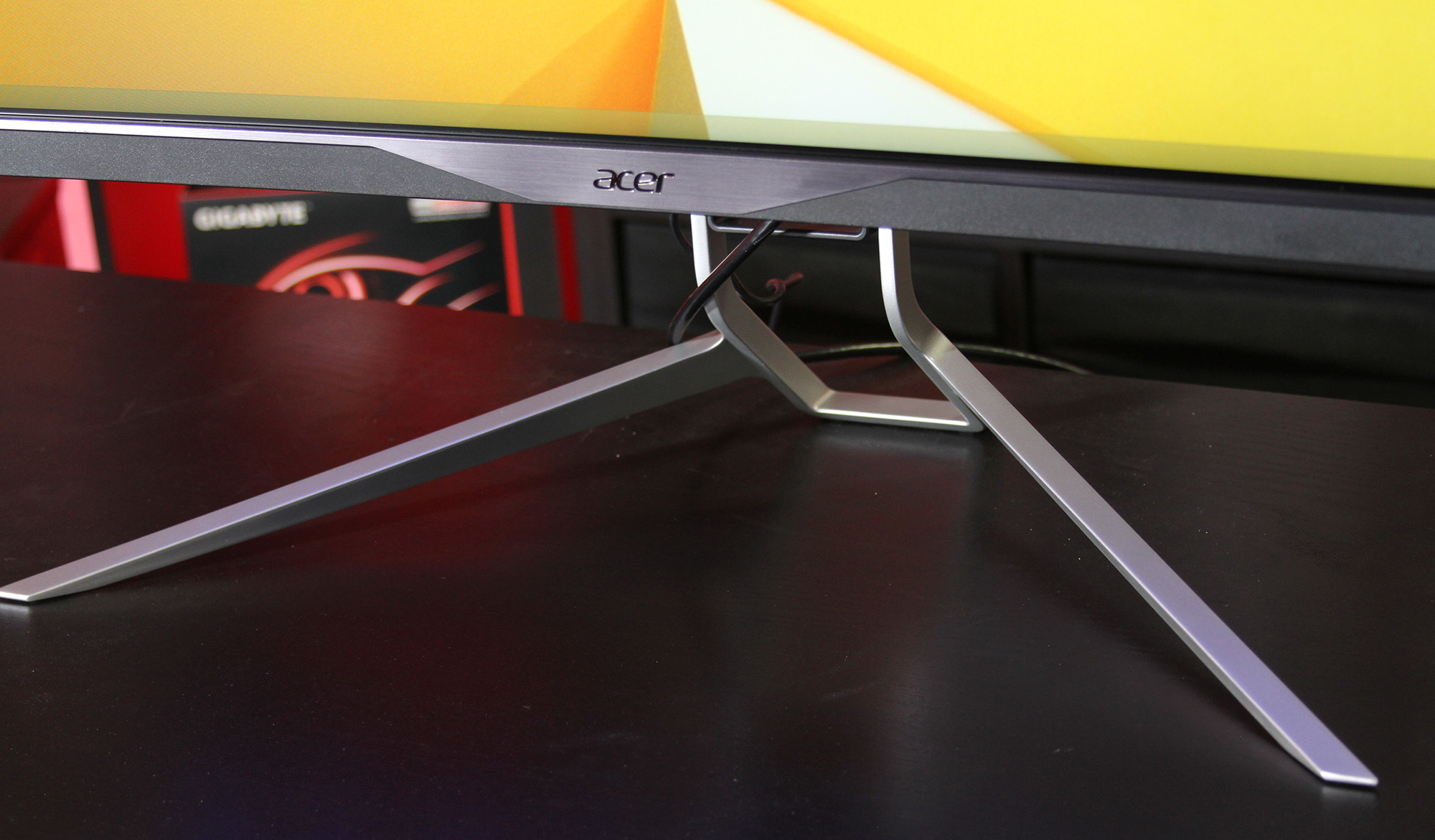 The stand under the monitor is uses two long legs along with a third base, of sorts, at the back in the center. It's minimal, but functional. It takes up a lot of desk space but you can definitely use the area between and under the legs for storage of post-it notes. 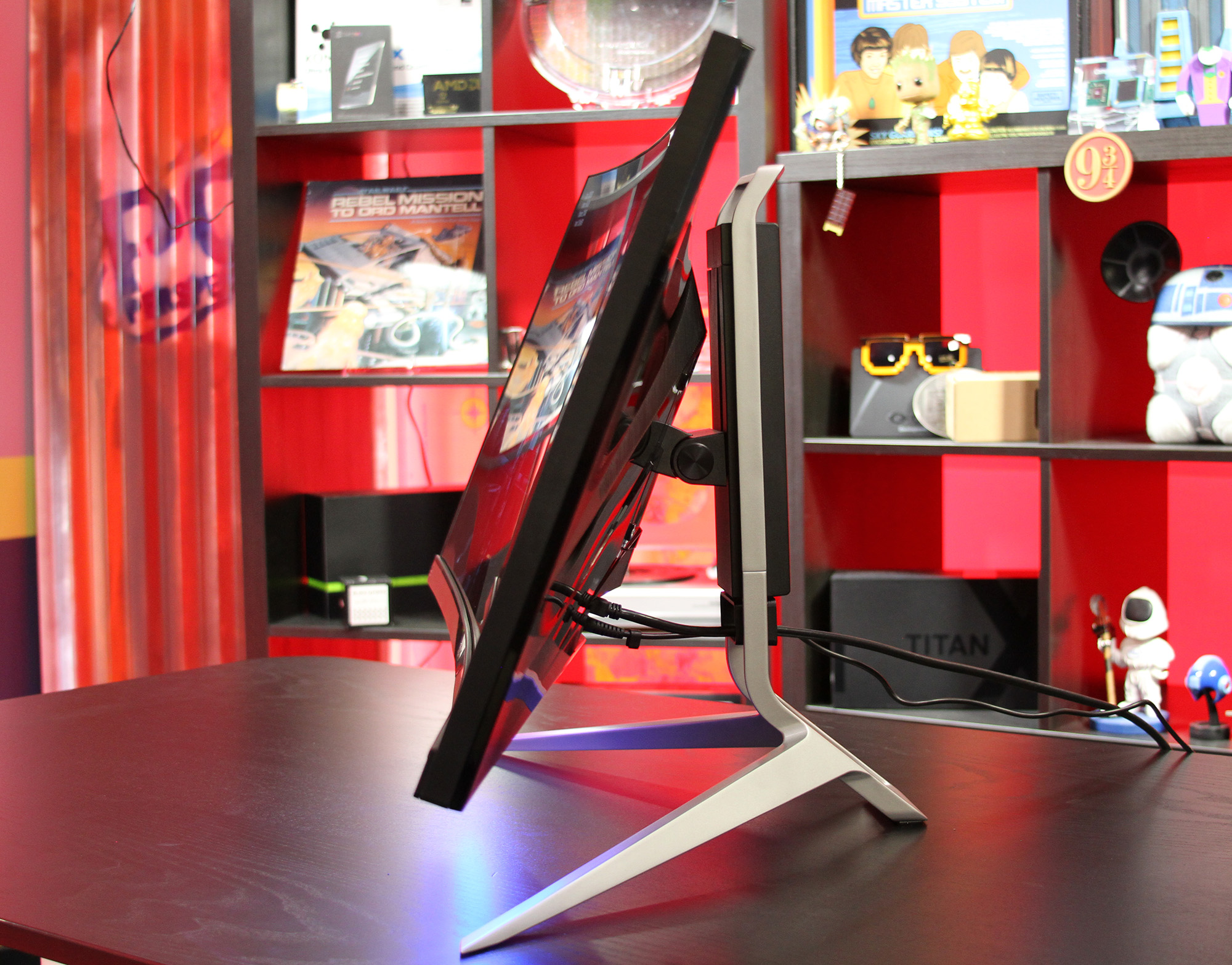 The rest of the stand supports height adjustment of about 5-6 inches, as well as angle adjustment from -5 to 35 degrees. 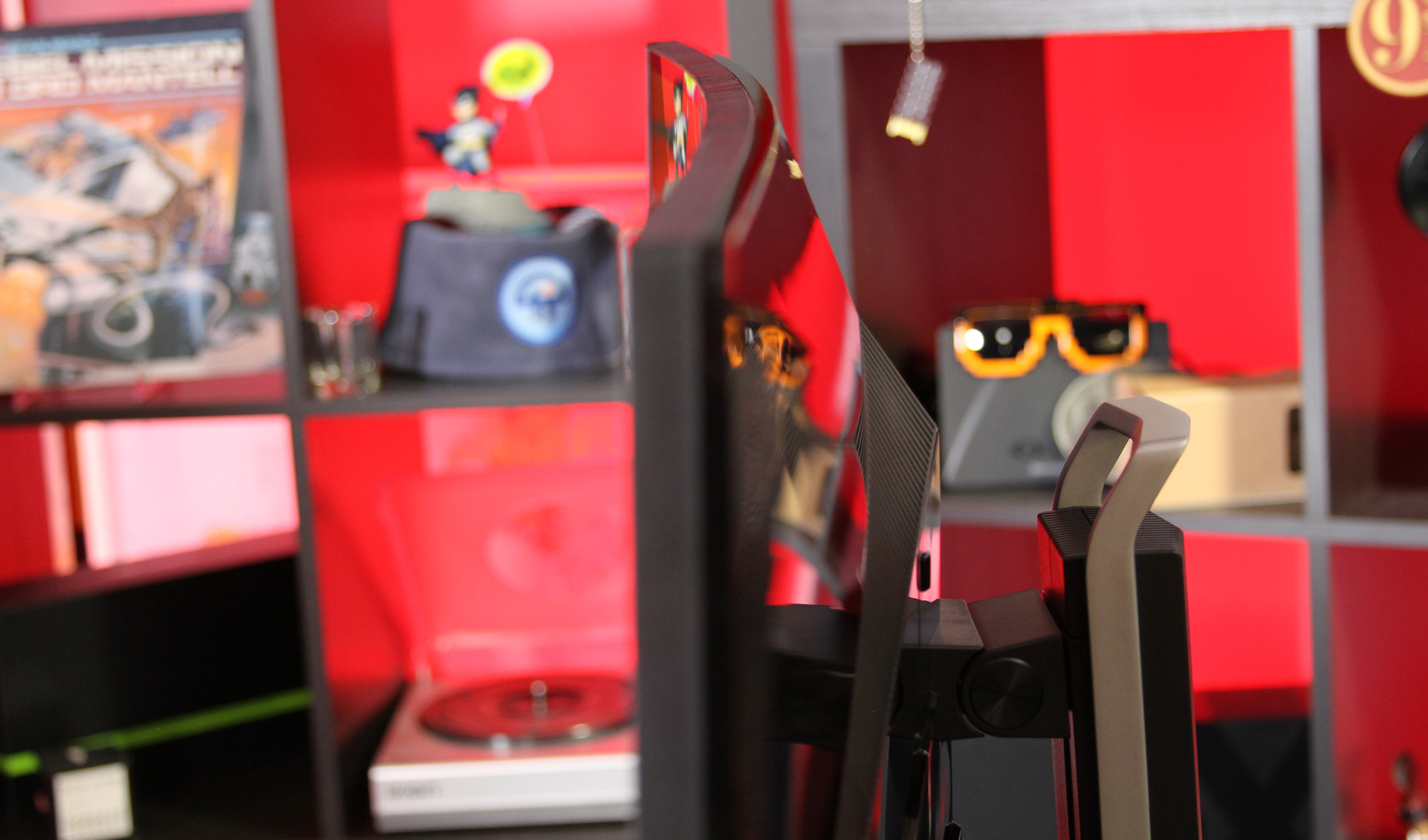 This shot shows you the subtle curve of the Acer XR341CK – it's not a huge amount and is just about perfect for a single user in the center of the screen's real estate. Issues that consumers had with curved TVs are avoided with the realization that monitors are inherently single user devices and with the extreme width of the screen, the curve helps make items on either side a bit closer to relative scale. 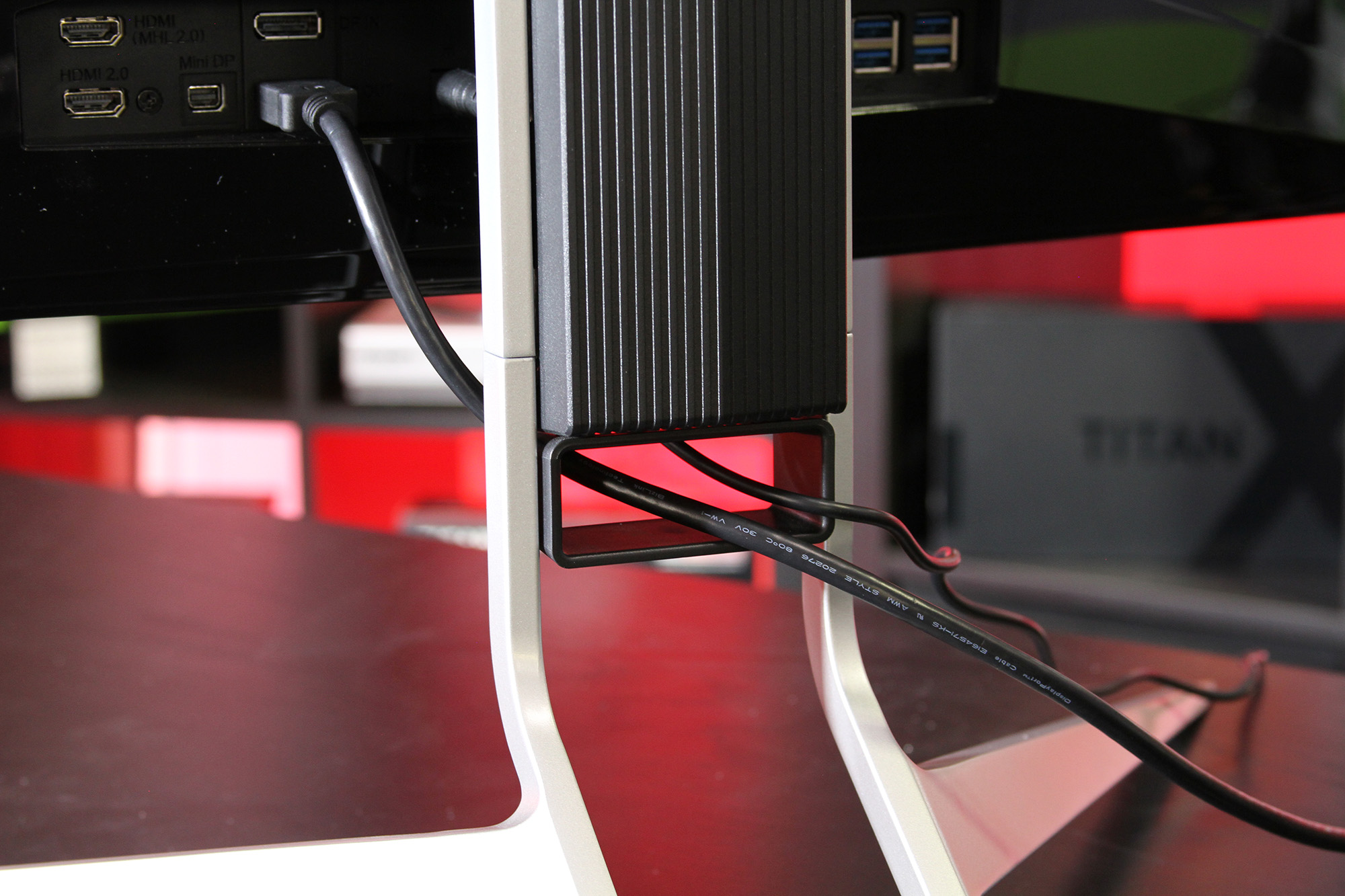 In the middle of the stand there is as simple cable management opening to run your power and display cables through. 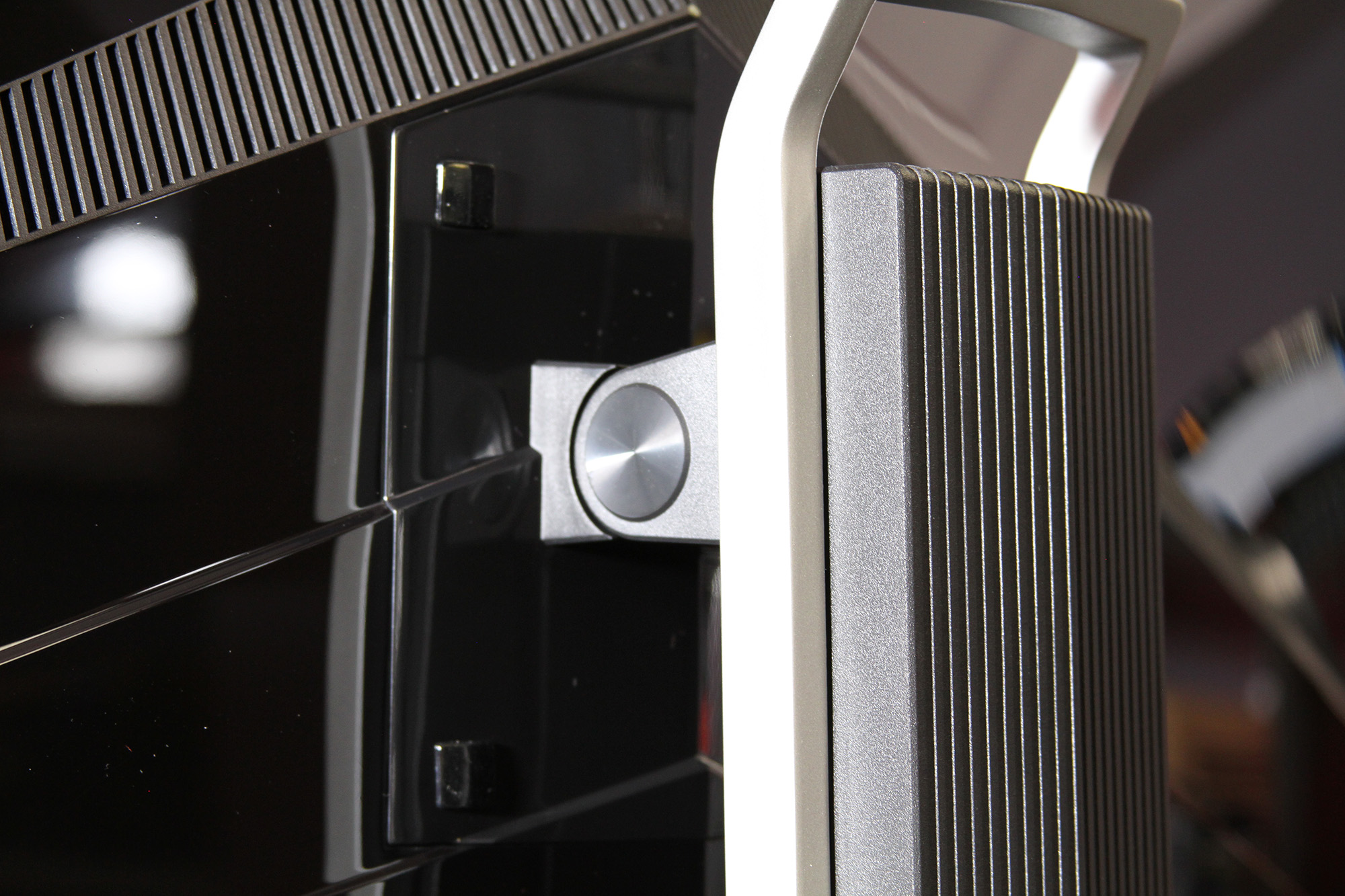 Acer has made the XR341CK VESA mountable as well should you want to replace the included stand or add this display to a desk arm.

For input connections, the XR341CK includes a mini DisplayPort, a full size DisplayPort (though only one can be used a time), two HDMI ports (one of which supports HDMI 2.0) and even a DisplayPort output to allow for monitor pass through. 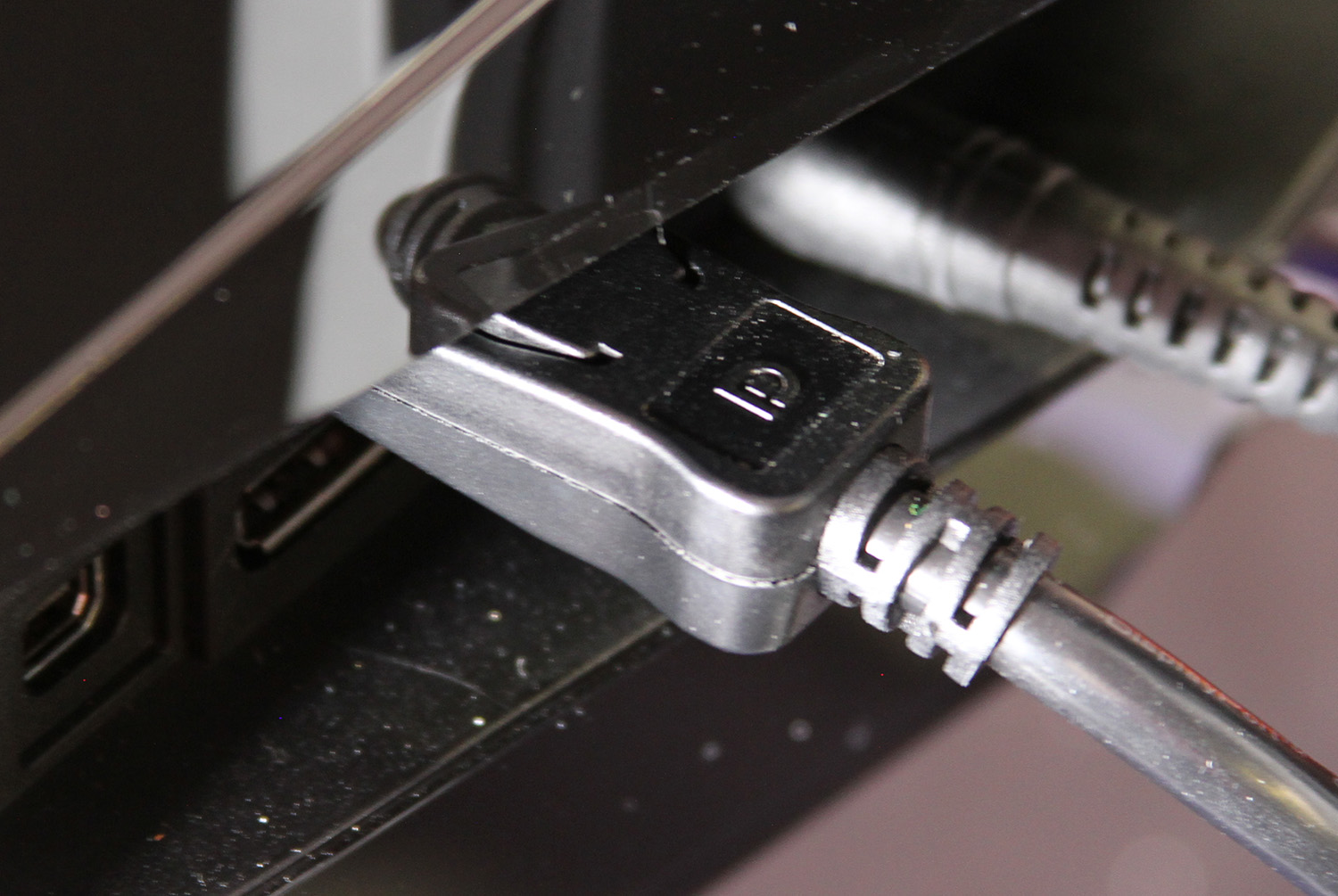 The input selection on the back is great but there is one headache in the design. If you use a standard DisplayPort cable with a retention lock on it (which is very common) you are going to have a difficult time removing it because of the proximity of the bordering overhang. To be fair, the cable that Acer provides does NOT have a lock on it to prevent this from occurring, but with only 4 feet of range with the cable in the box, I fear many users will find longer cables and then later realize the issue. Acer should fix this on future models. 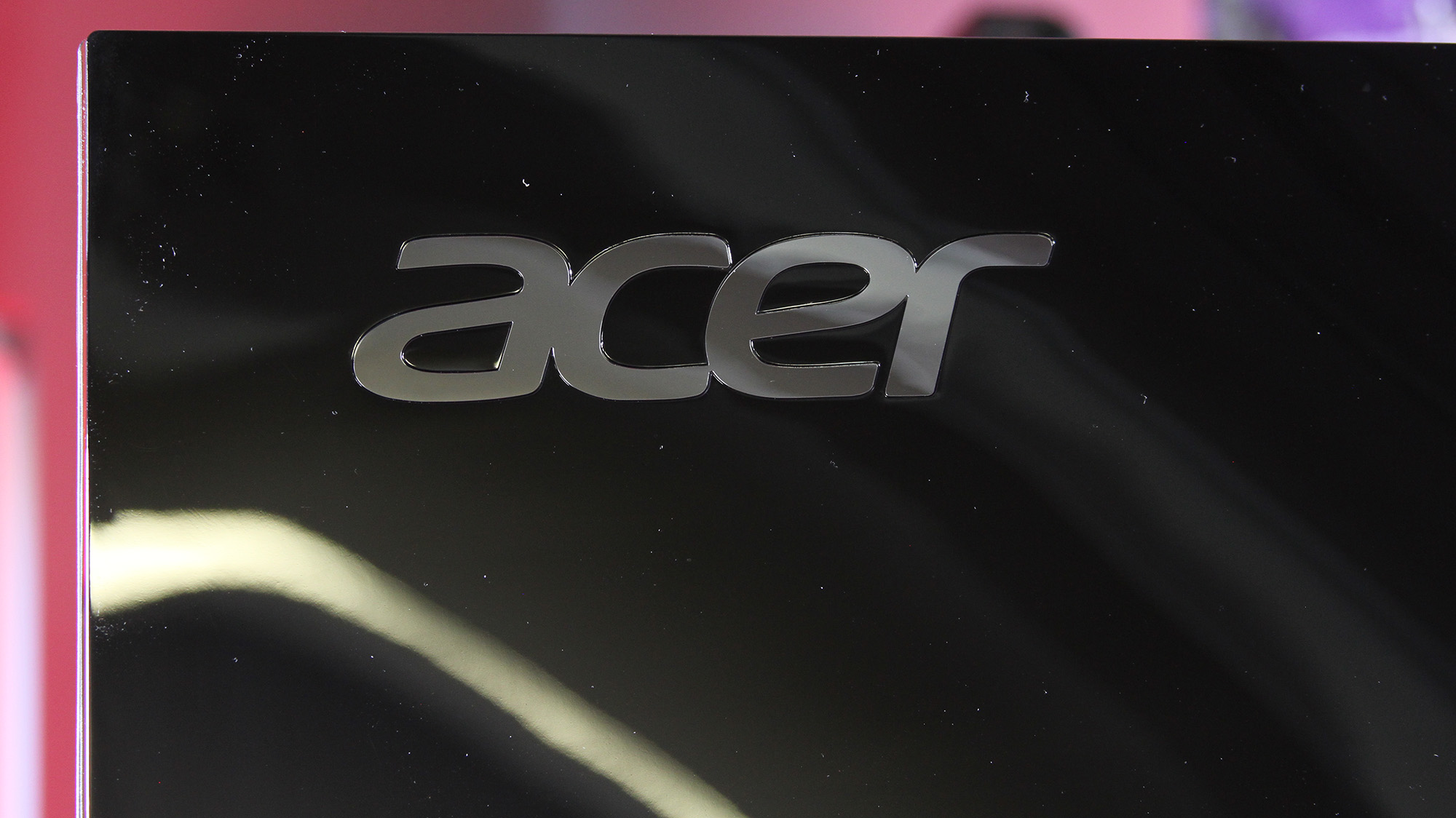 The back side of the monitor is a very shiny piano black finish and will attract dust and fingerprints easily. For most users with the monitor opposite a wall it will likely not be an issue. If the rear of your monitor faces outward though you'll want to keep a dust rag handy. 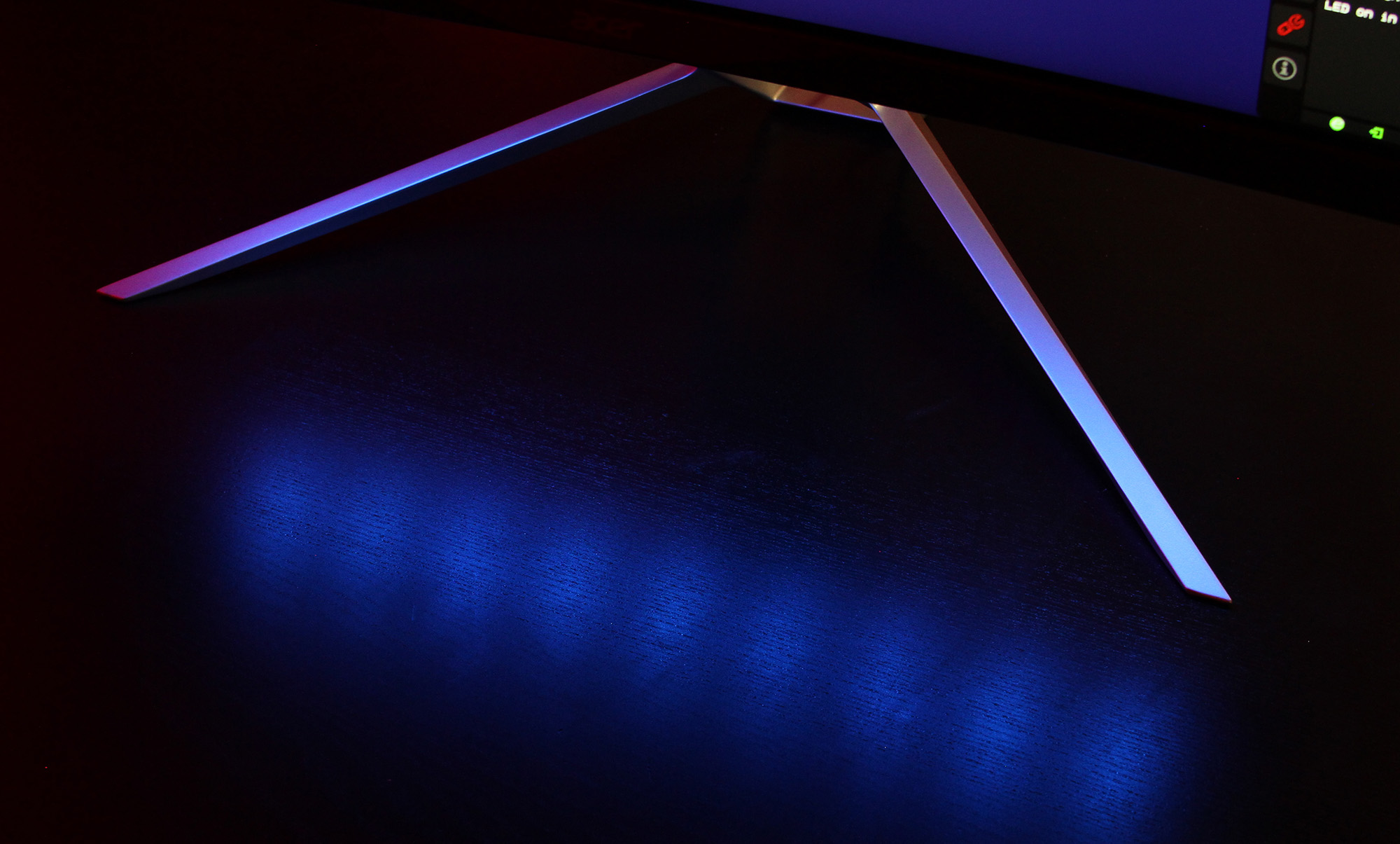 Acer has included ambient lighting under the XR341CK that can be adjusted for color, pattern and brightness. Blue, red, green and white are your options, with five different brightness settings and you can have the light steady, flash, pulse or swing back and forth like Knight Rider. It is a really neat effect and is actually useful for those of you that game in the dark, adding some ambient light to your desk. 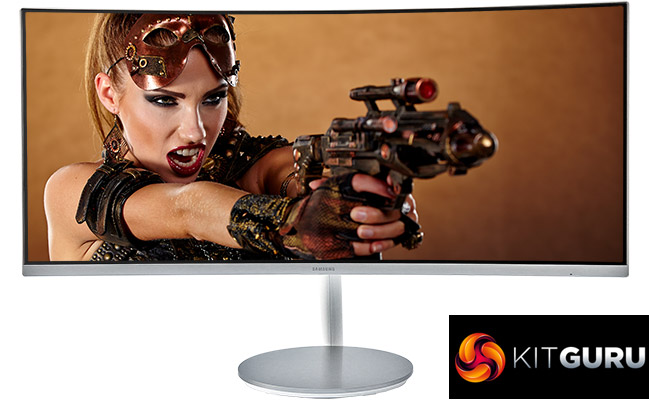 All it’s missing is a cup holder

Twisted Vertical Switching … a look behind the screens