The original ROG Swift PG278Q was not only one of the first G-Sync monitors to ship with a 2560×1440 resolution, but it held its claim as one of the crowd favorites because of its exemplary build quality, style and even on-screen display interface. The new PG279Q follows very closely in those footsteps with similar style and the same control scheme. 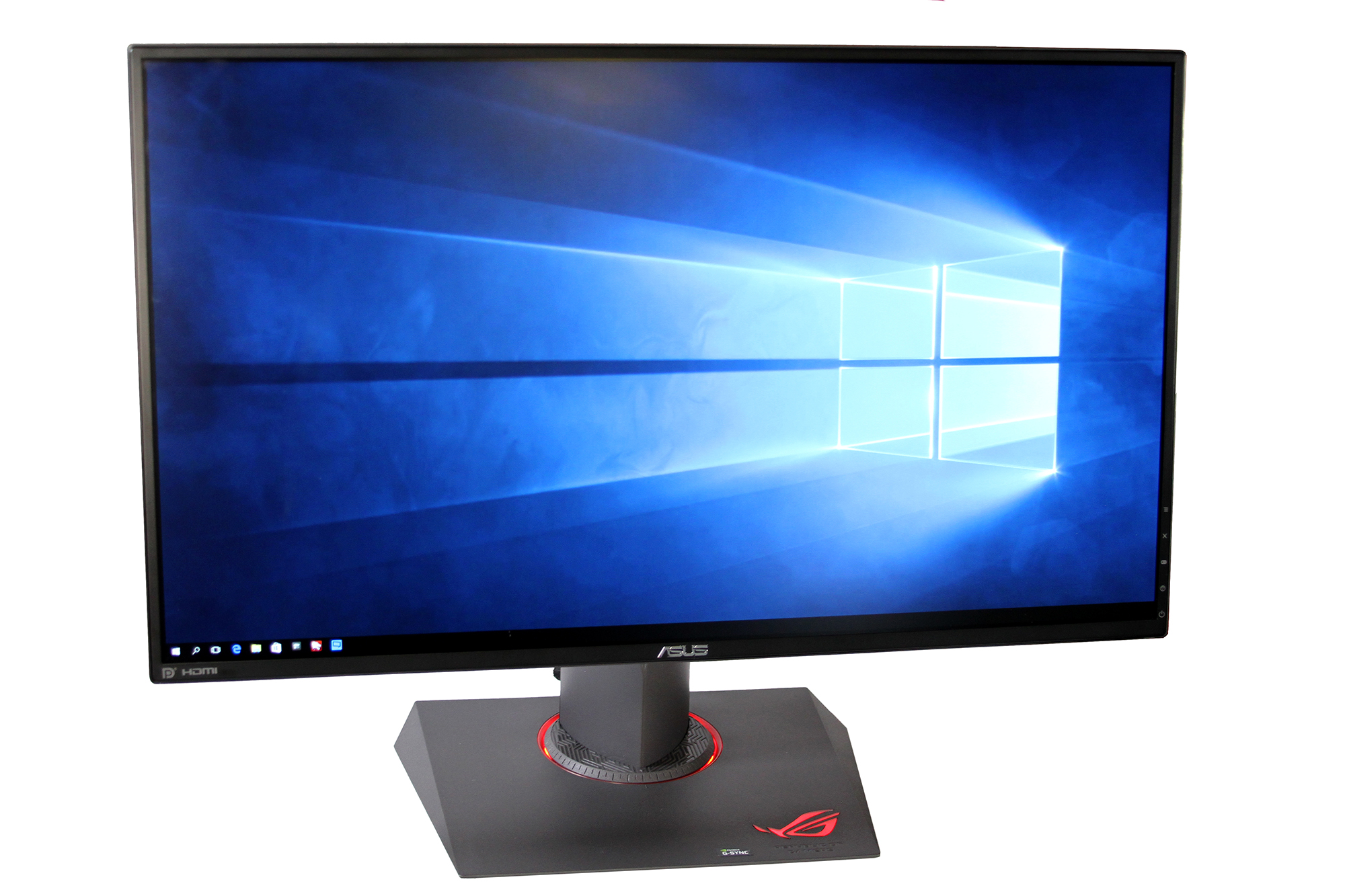 The angular, sharp design of the ROG Swift returns again though this time we get a slightly upgrade to the base with second illuminated area, an ASUS Republic of Gamers logo. 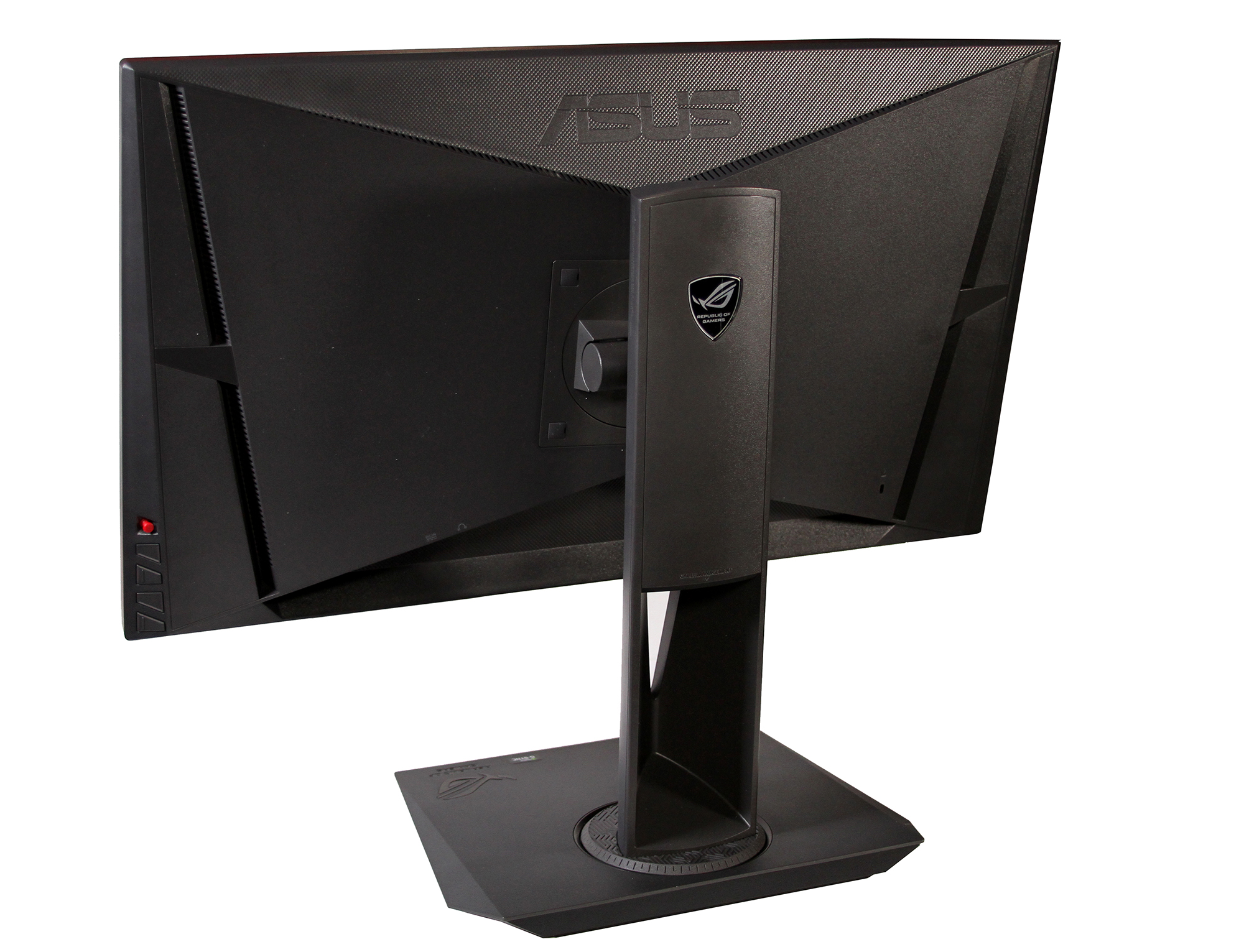 Around back, the monitor still shows the angled design queues that made the PG278Q popular as well one of the best built stands in the class of monitor. It supports height adjustment, swivel, tilt and can rotate 90 degrees to be placed in portrait mode. The opening in the middle of the stand allows cables to be routed cleanly to the connections along the bottom of the monitor.

Should you choose to do so, the stand can be removed to reveal a standard VESA mount on the back for installing on multi-panel stands or on articulating arms. 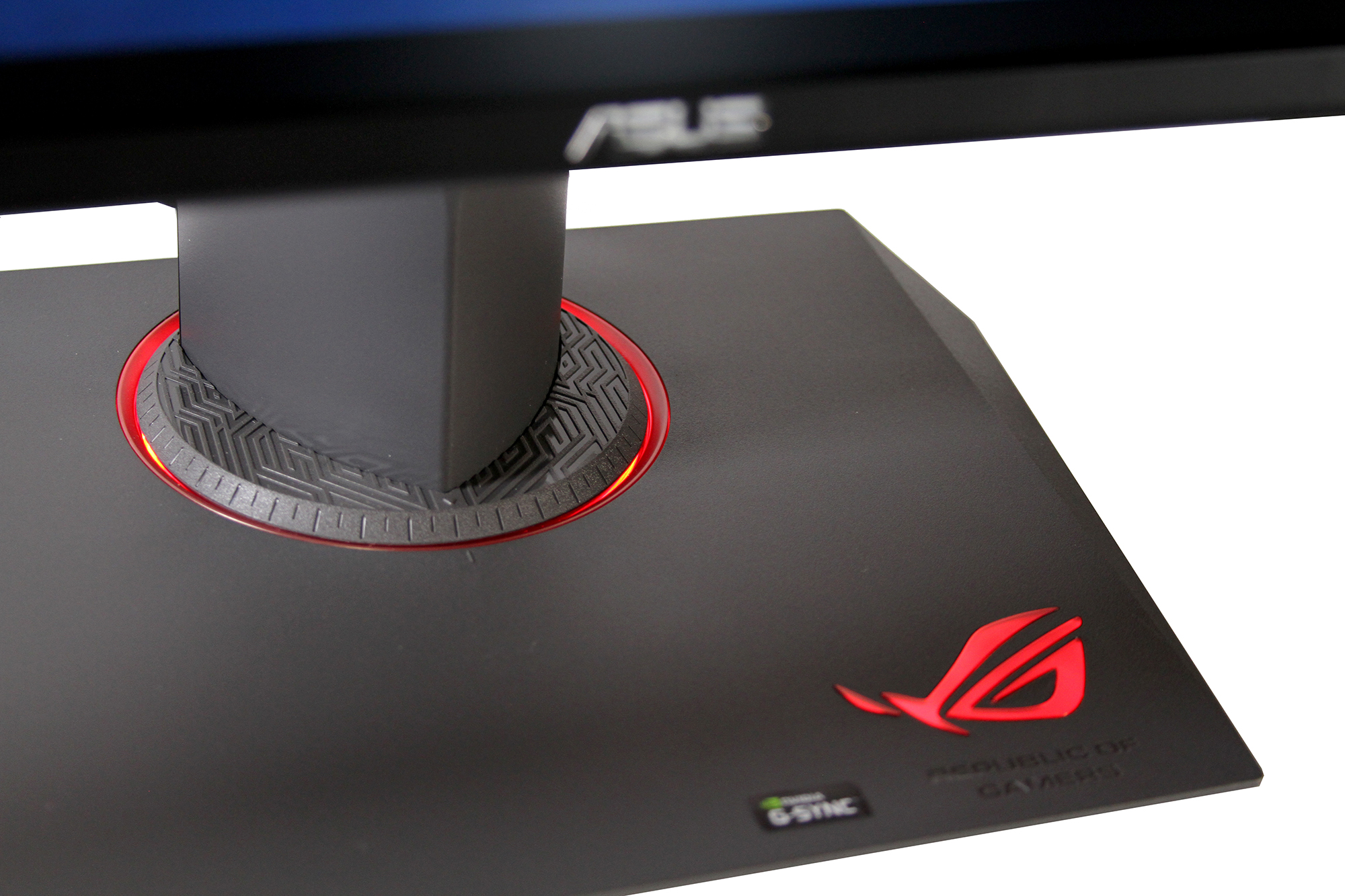 The red ring, called Light in Motion in the OSD, one of the ROG Swift calling cards, makes a return with the PG279Q. This time the ROG logo lights up as well, adding a bit more style to the design and making sure you know damn well this is an ROG display! 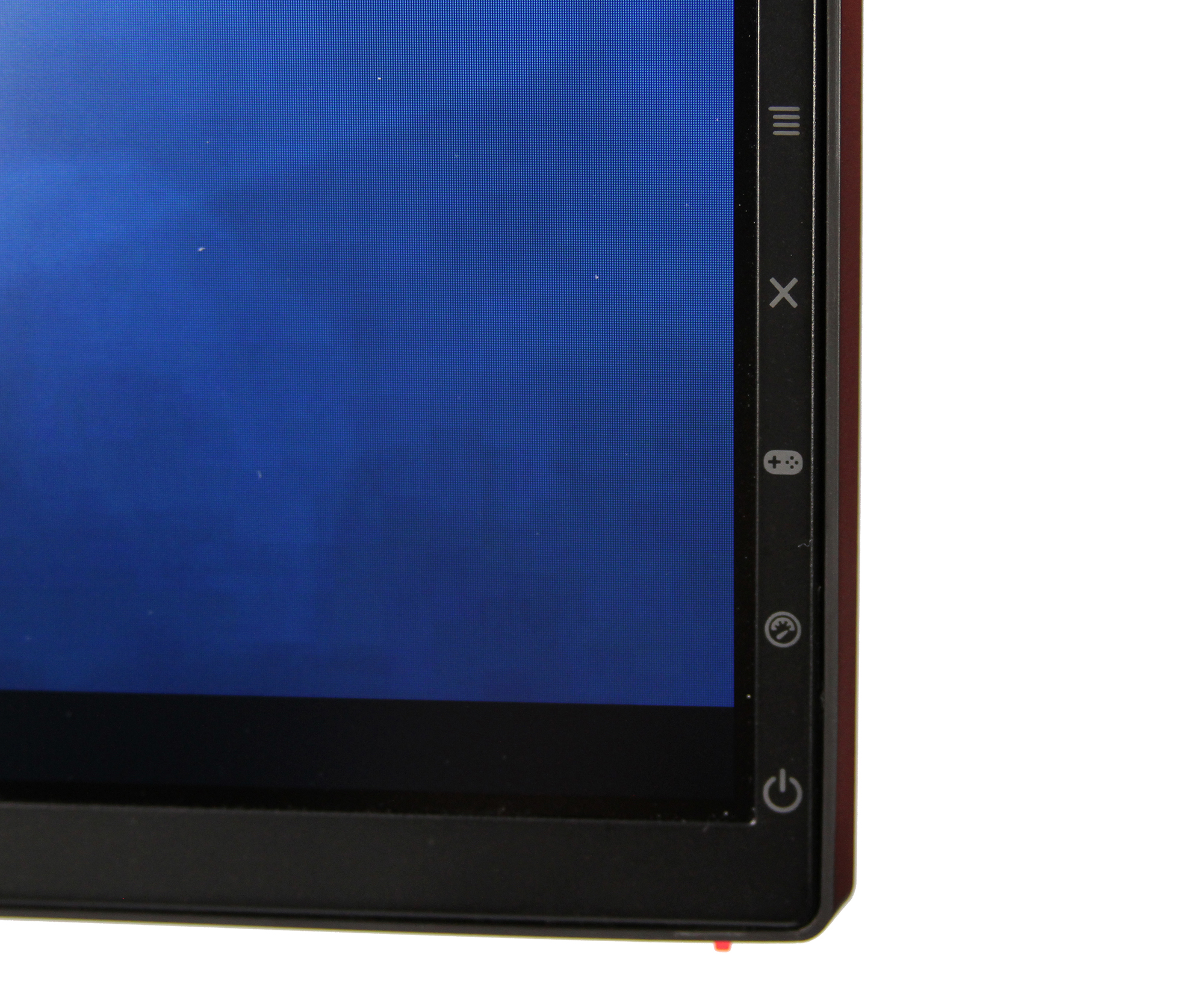 ASUS loves to talk about how thin the bezel is surrounding the screen on the ROG Swift PG279Q and it is impressive – as thin as any monitor you'll find on the market today. Unlike some other displays that try to fake the appearance of a thin bezel by moving it UNDER the glass of the screen itself, ASUS has brought the pixels as close to the edge of the plastic as possible. The only on-bezel light is the one located under the power button to tell you when you are in a variable refresh mode. 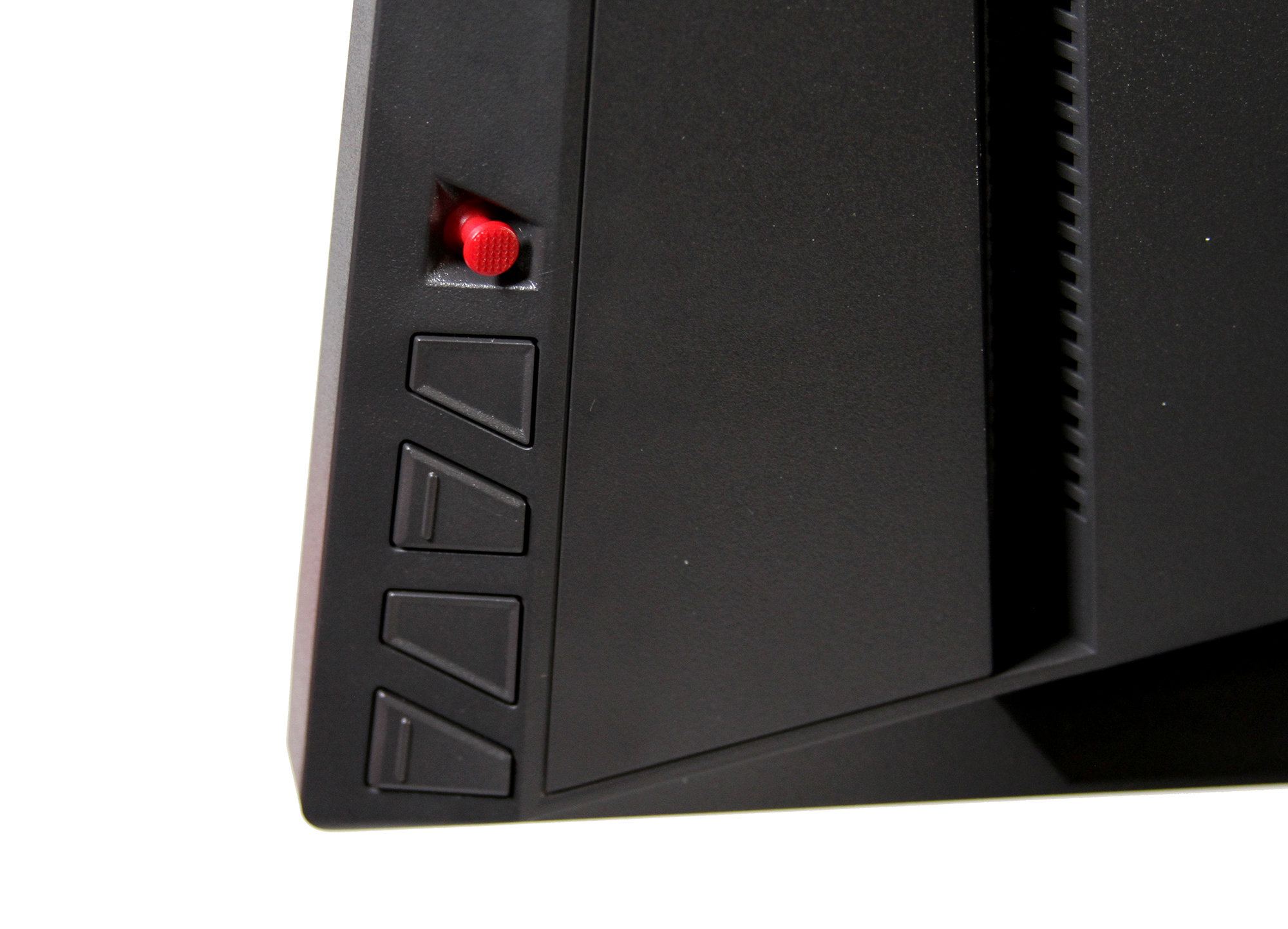 Interacting with the OSD on the PG279Q uses the buttons and joystick along the back. Though you cannot see them when using them from the front of the display, that joystick is incredibly intuitive and easy to navigate. More vendors could learn from this! 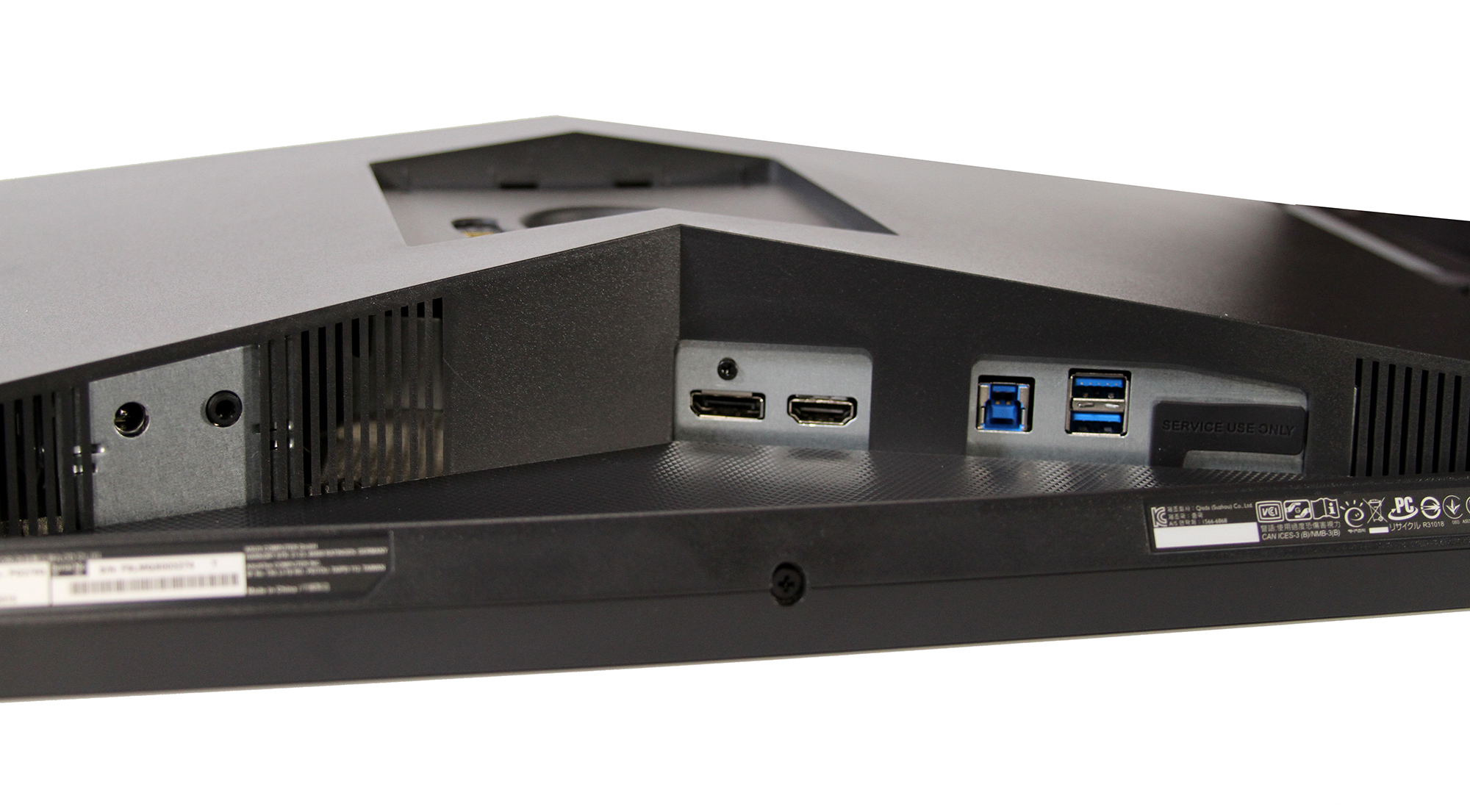 Along the bottom hides the inputs for the PG279Q, including a 2-port USB 3.0 hub, DisplayPort and HDMI connection, a 3.5mm audio jack and the power connection. The audio port allows you to plug in analog headphones to listen to the incoming DP/HDMI audio.

G-Sync and the 165Hz refresh rate are only available over the DisplayPort connection but the inclusion of the HDMI input is a new feature all together for G-Sync panels. As part of the second generation of G-Sync module, NVIDIA built in the ability to support a second input device, but it does NOT support variable refresh rates and is limited to 2560×1440 @ 60Hz.

The OSD on the ROG Swift PG279Q is great, on part with the one found in the original PG278Q monitor with similar control scheme, options and features. 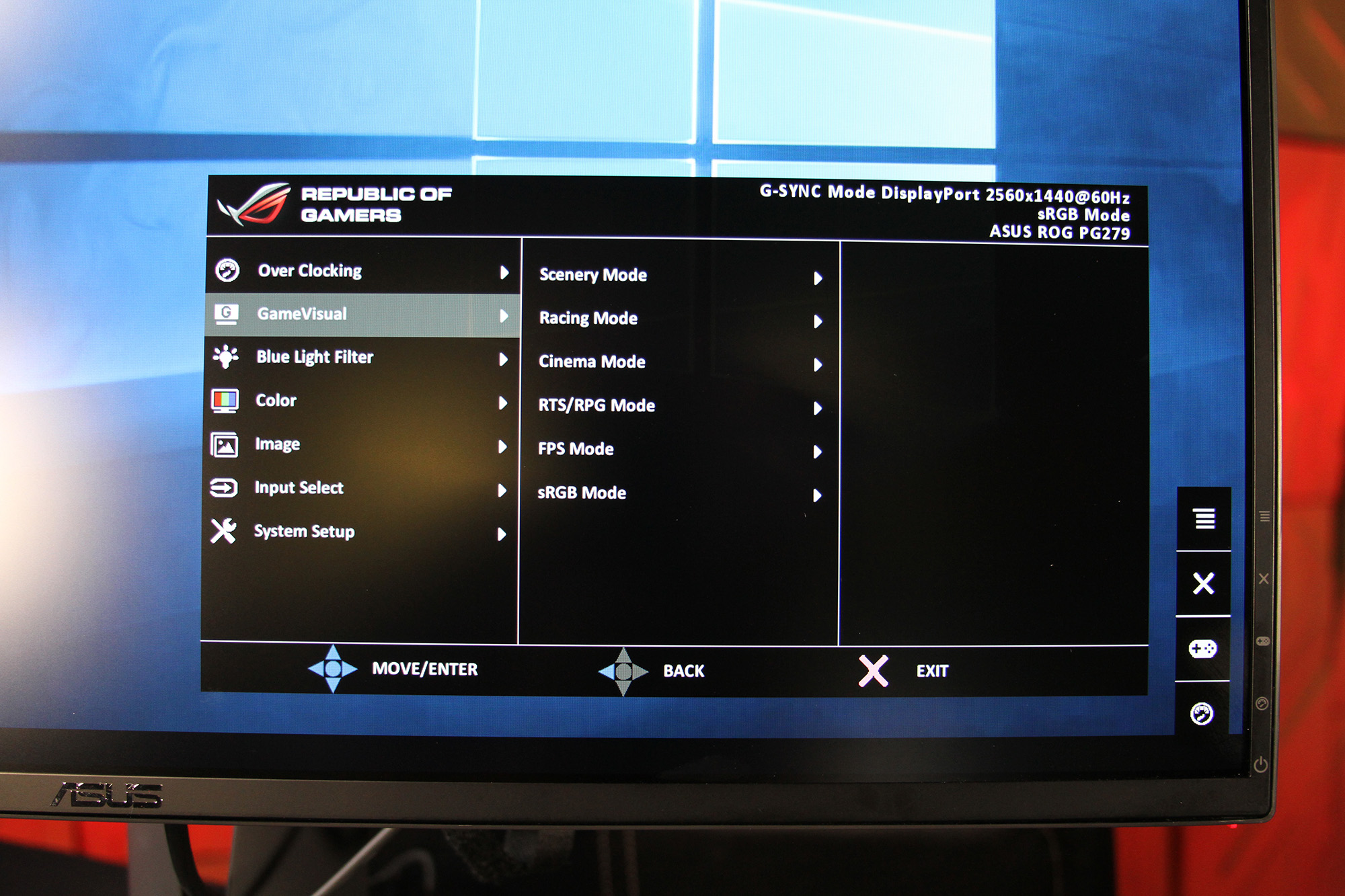 We'll detail the overclocking portion a bit later, but the primary listings are for GameVisual (setting up color presets), a blue light filter, manual color adjustment, image adjustment and input options. The GameVisual selection shows you the different modes you can put the monitor in, all of which change the brightness, blue filter levels and color space slightly. There is no "user" mode option that you can adjust the settings on; instead you can actually change the settings on ANY of them except the sRGB option. 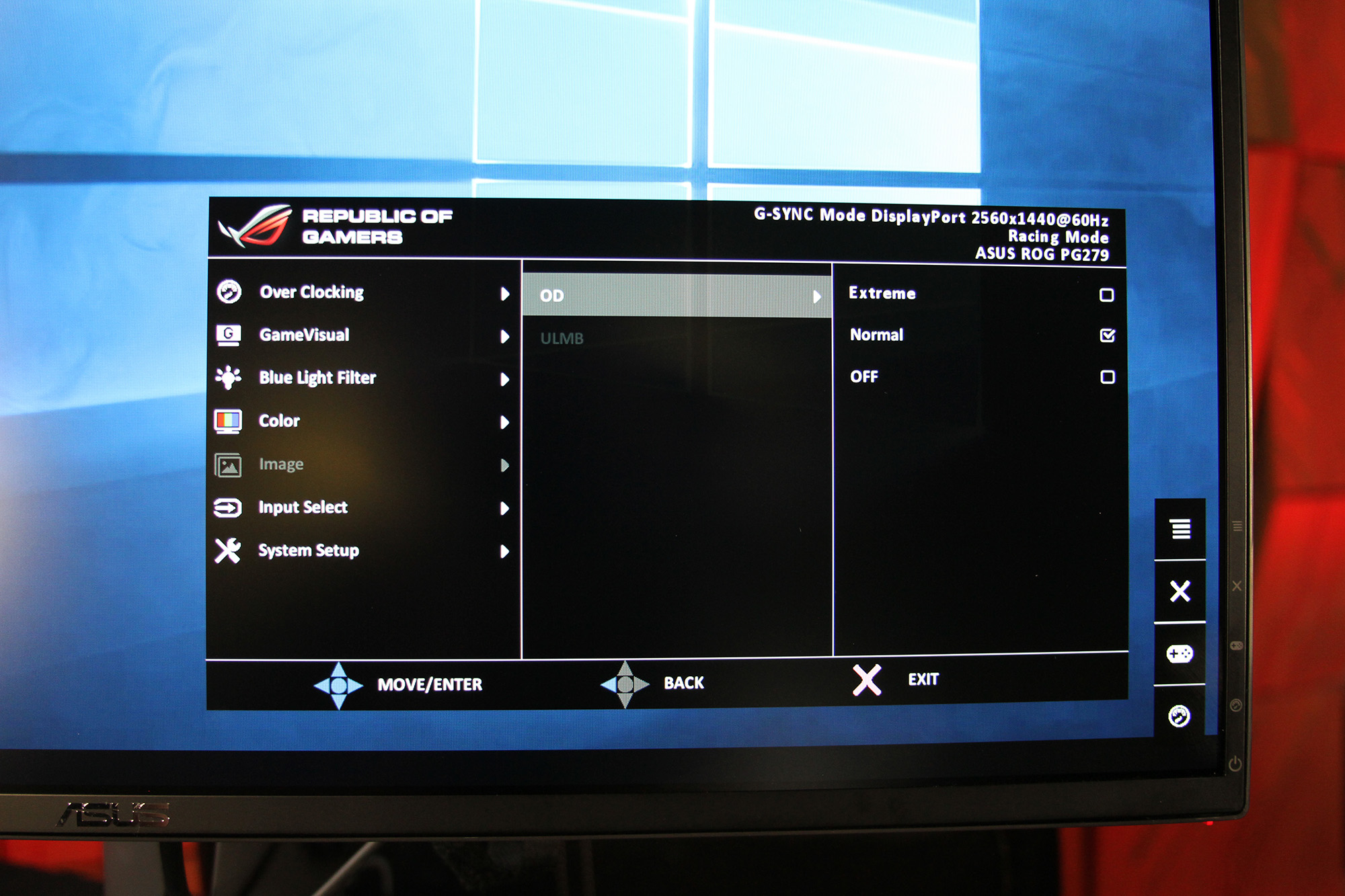 Overdrive settings are easily accessed with three options: off, normal and extreme. We have images of the results below, but I'll just tell you here that leaving this on Normal is the best choice. 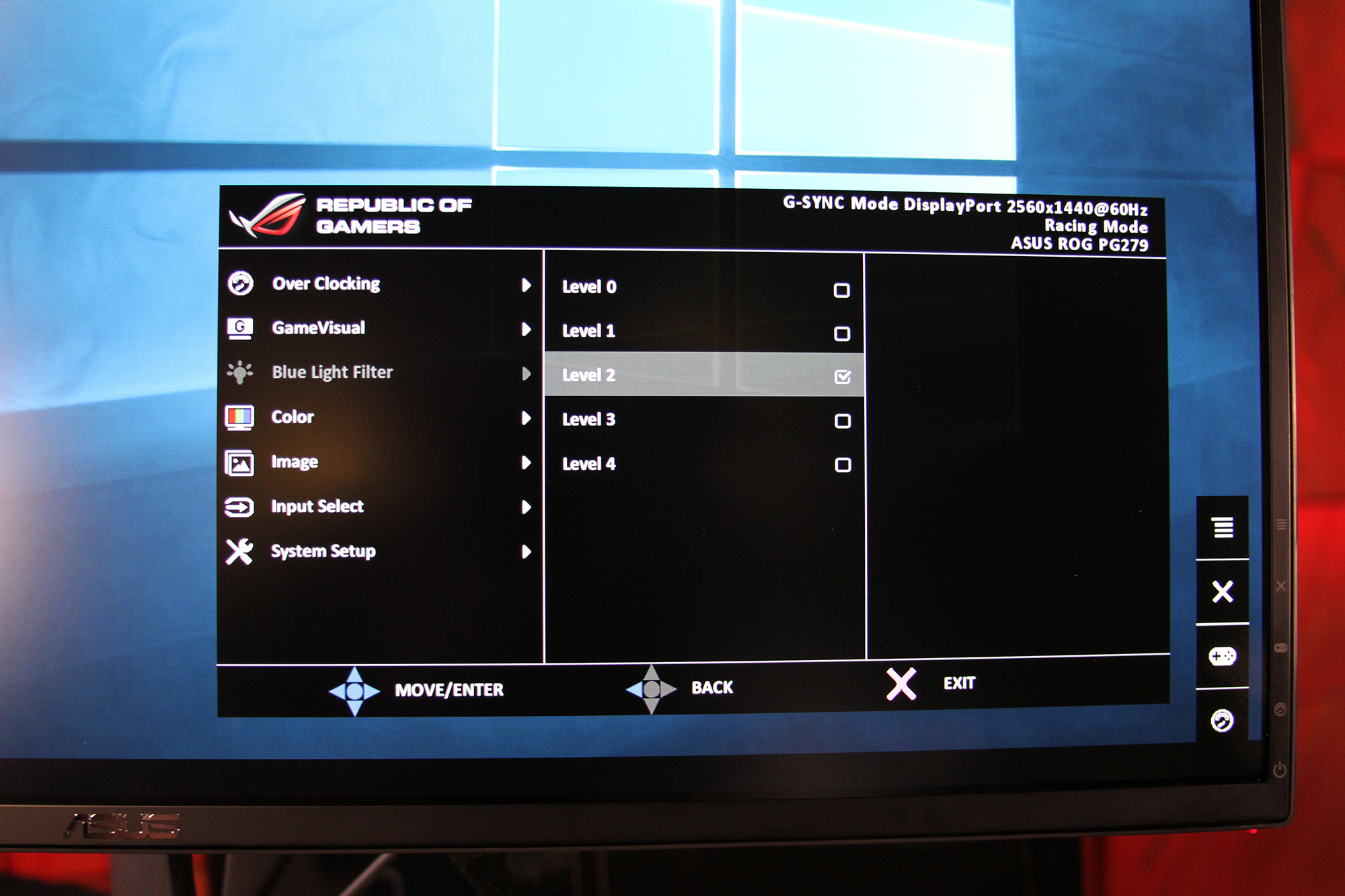 The blue light filter option does exactly what it says – takes some of the blue color out of the screen to help prevent eye strain. The different levels determine how much blue is removed. Removing more blue can help with eye fatigue but it obviously will affect color reproduction quite dramatically. For those of you that do a LOT of reading on your monitors though, it might be a nice feature to be able to toggle on.

With his trusty high speed camera in hand, Allyn set about to take some images of the new ROG Swift PG279Q from ASUS in each of its three overdrive modes. 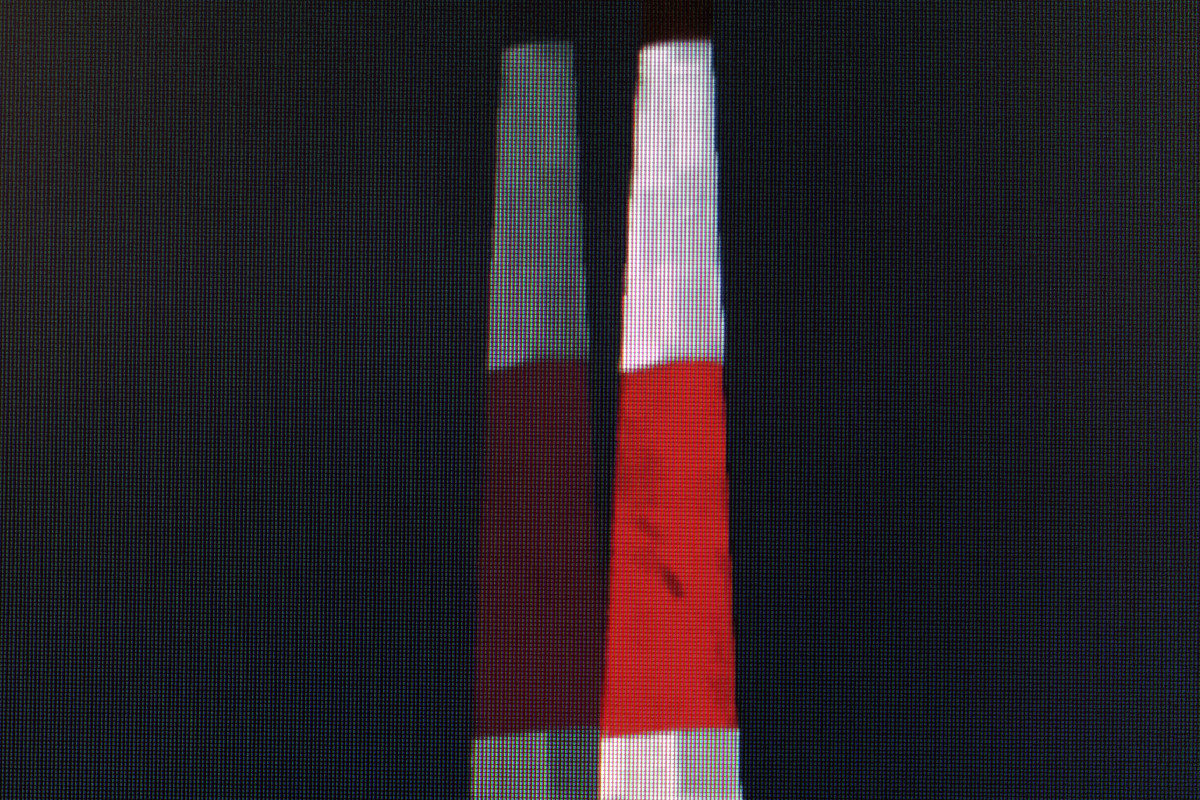 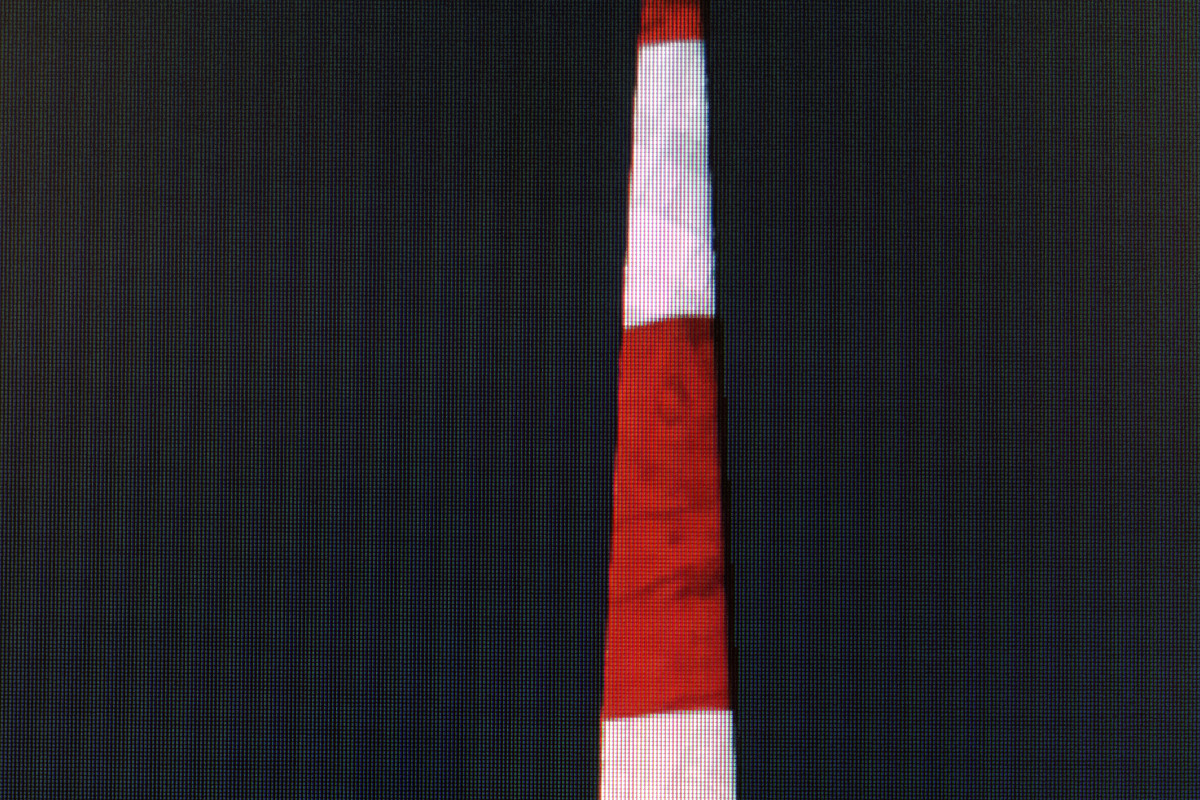 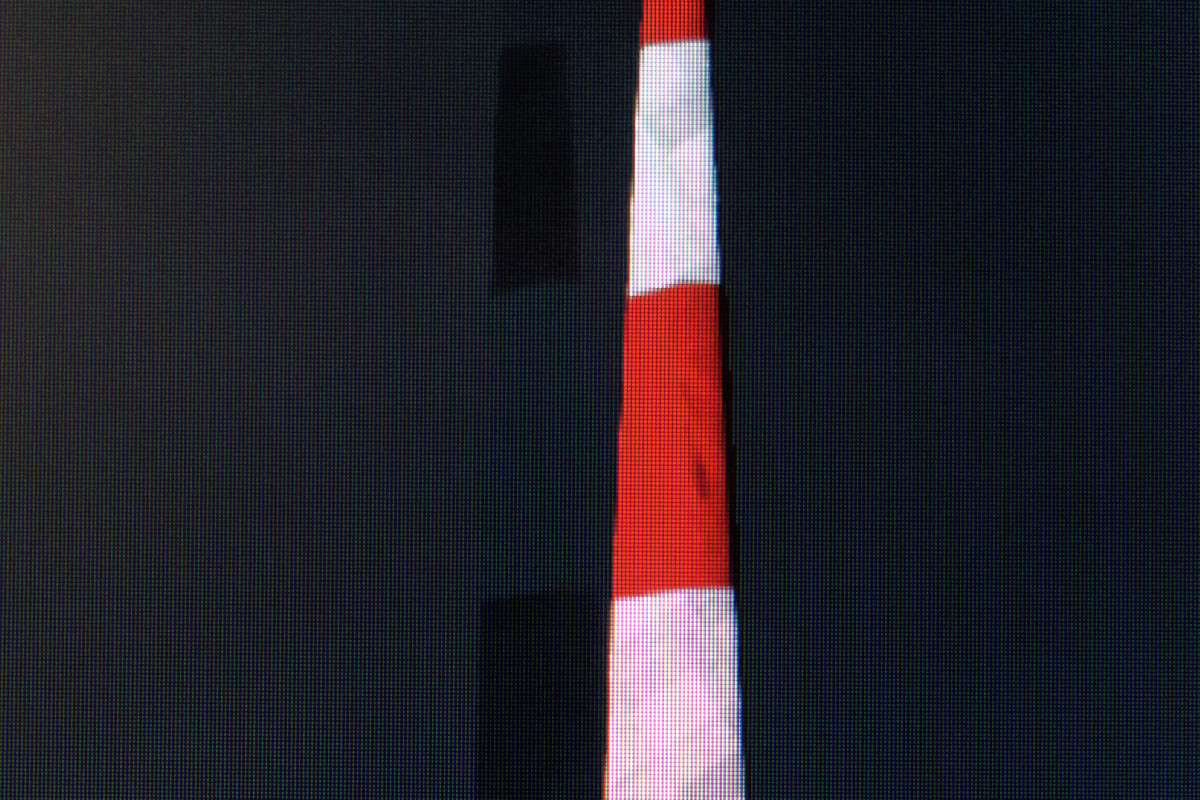 Clearly the ASUS PG279Q excels when set to Normal in the overdrive settings, creating an image that is likely the best we have ever seen in either variable refresh or static refresh rate monitors. 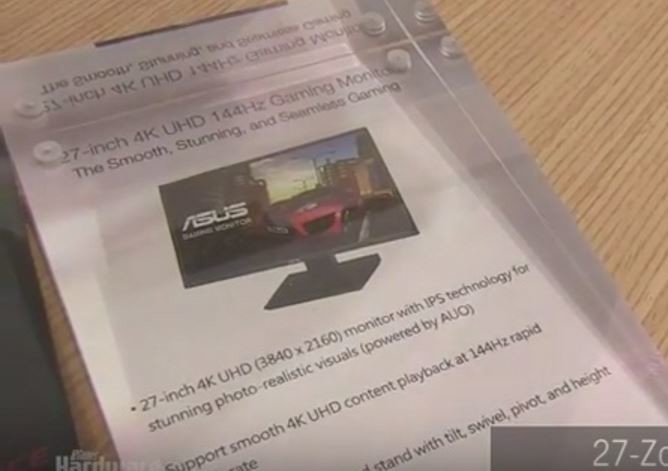