As most of our readers are well aware, the graphics market is dominated by two GPU vendors, both of which sell chips and reference designs to add-in board partners. ASUS is one of the oldest add-in board partners. According to their anniversary website, ASUS even produced a card that was based on the S3 ViRGE/DX graphics chipset all the way back in 1996.

To celebrate their 20th anniversary, although they don't exactly state when they start counting, ASUS has released a few high-end versions of Maxwell-based graphics cards. This one is the ASUS 20th Anniversary Gold Edition GTX 980 Ti. It comes with a base clock speed of 1266 MHz, which boosts up to 1367 MHz as needed. This is quite high, considering the reference card is clocked at 1000 MHz and boosts to 1189 MHz, although overclocking the 980 Ti is not too difficult to begin with. Ryan got up to 1465 MHz with a reference card. The Gold Edition GTX 980 Ti might go even higher with its enhanced cooling and power delivery, and it's designed for liquid nitrogen if you're that type of enthusiast. 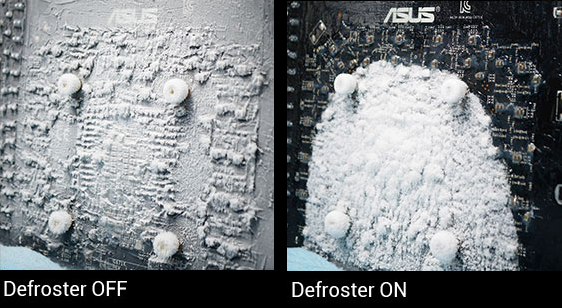 Speaking of liquid nitrogen features, the card advertises a “Memory Defroster” feature that looks rather extreme. I can't say that I've ever seen a graphics card get covered in a visible layer of ice, but I've also never attached it to a reservoir of liquid with a temperature that's easier to write in Kelvin than Celcius.

Is this a legit problem? Or does this seem like “anti-dust shield” to everyone else too?