Qualcomm has finally revealed the entirety of the Snapdragon 820 feature set. We were on-site to see the demos first hand.

If you have been following PC Perspective over the last several months it would be hard to miss news about the upcoming release of Qualcomm's latest flagship SoC for smartphones and tablets, the Snapdragon 820. Beginning in early August with discussion of the Adreno 5xx GPU architecture, followed by information covering the Hexagon 680 DSP (digital signal processor) and then details on the LTE modem in the SoC (the X12), and ending with information on the Kryo CPU cores, the release of the Snapdragon 820 processor has been drawn out if nothing else.

The emphasis on distribution of data was likely at attempt to rebuild trust with the enthusiast consumer, media and even the OEMs, as the launch of the Snapdragon 810 was troubled by overheating concerns and second revisions. Several high impact flagship smartphone used the SoC, including the LG G4 (correction: G4 shipped with the Snapdragon 808, while the HTC One M9, OnePlus 2, Sony Xperia Z5 and others use the 810) but with Samsung moving away from Qualcomm parts to its own designs, the processor didn't see nearly the ubiquitous adoption that we had expected and witnessed in previous generations. 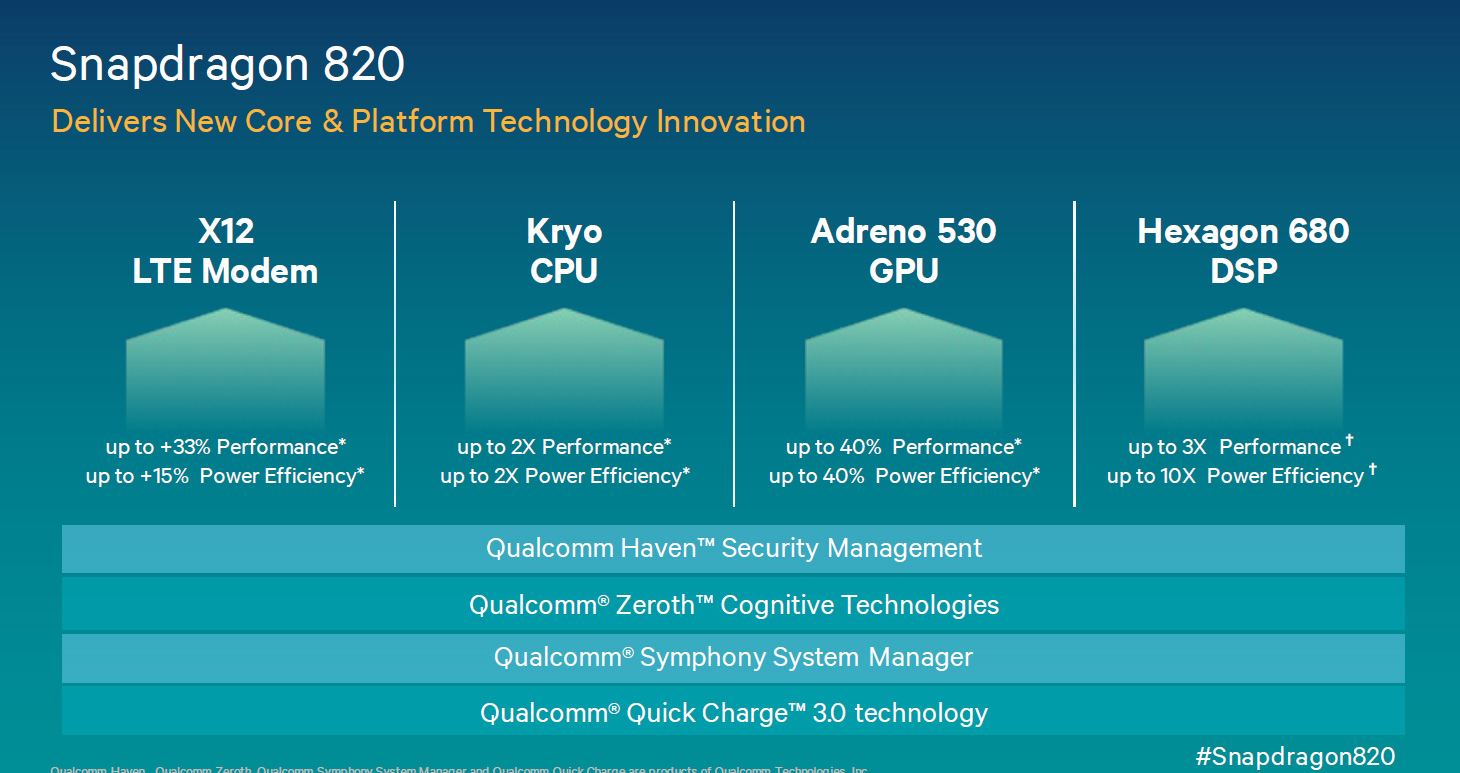 Qualcomm invited some media and analysts out to New York this week to take the cover off of the Snapdragon 820 completely, at least as far as features are concerned. We still were not able to get to the meat of the details surrounding the CPU / Kryo implementation or architectural improvements, but we are promised those would be coming closer to product availability in 2016. Instead, Qualcomm wanted to show off the consumer benefits that phones and tablets based on Snapdragon 820 could feature (based on OEM implementation); that means lots of demos, lots of time with product and feature managers.

But before we dive into the detail of the demos and describe what we saw, let's give you a quick rundown on what we know about the Snapdragon 820 SoC from a technical standpoint. First, unlike the 810, the SD 820 features completely rebuilt, custom ARM 64-bit cores. This new SoC is no longer using off-the-shelf components from ARM directly, and instead returns to the legacy of Krait, a CPU architecture that helped the company differentiate on performance and power. This time around the core is called Kryo, and they are the company's first custom designs to take advantage of the ARMv8 64-bit architecture.

The SD 810 utilized four ARM Cortex-A57 and four Cortex-A53 processors in a big.LITTLE combination. For the SD 820 though Qualcomm is stepping back to what they consider to be the best balance of performance and power: four native cores. Interestingly, it did come up today that the cores are divided into two pairs, with different performance characteristics for each set. One pair will operate a lower performance, lower power mode while two will run at higher clocks and voltages, allowing for faster processing when needed. This sounds a lot like the balance that ARM's big.LITTLE designs aim for and it's very possible that Qualcomm saw the benefits when working on the SD 810. With its own architecture at the core I expect the SD 820 to show impressive overall performance gains. 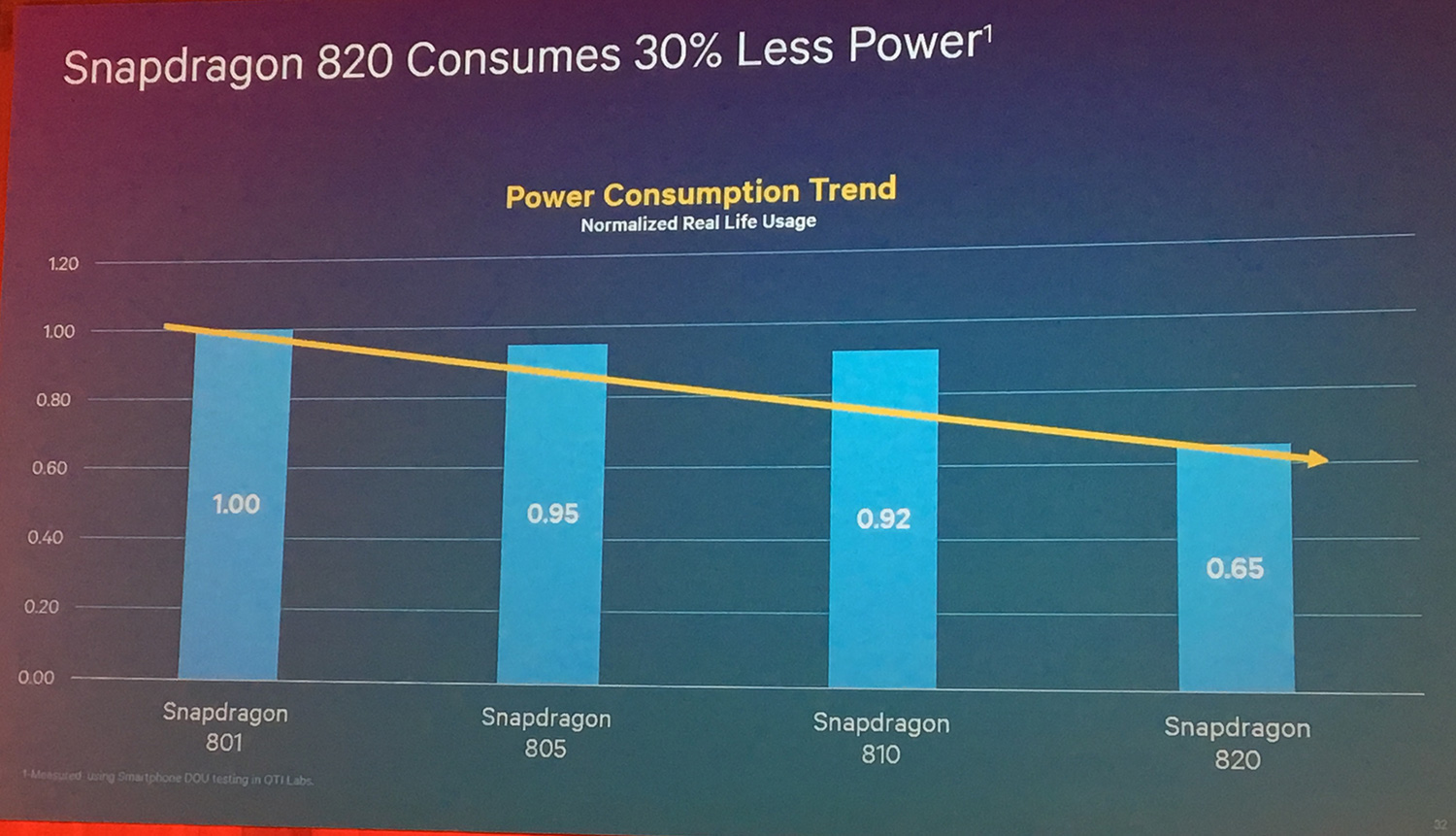 The Adreno GPU in the Snapdragon 820 will be upgraded to the 530, and Qualcomm claims we should see as much as a 40% more performance when compared to the Adreno 430 found in the SD 810 from last year. And, even better, Qualcomm says it will be able to do this while consuming as much as 40% less power. The display engine for Adreno 5xx also gets some improvements including HDMI 2.0 support in order to output 4K video at 60 Hz, as well as 4K/30 Hz support for wireless display streaming. Video gear heads will love to see support for the Rec. 2020 color standard and improvements in display compression which will aid in battery life and pixel quality.

The Hexagon 680 DSP is what Qualcomm calls the "third pillar of compute" in the Snapdragon 820 and is a part of the total heterogeneous computing architecture the company has built. The DSP aids in processing for images and videos while opening up its programmability to third part developers and OEMs. New to the Hexagon 680 DSP are additional ISA extensions called HVX, Hexagon Vector eXtensions. These are an industry-first ultra wide vector SIMD extension for a DSP, going as high as 1024-bit. Qualcomm claims this new vector capability will allow for customer and partner development and innovation in the areas of imaging, VR and CV. This DSP is also an important component to support the Spectra ISP we learned about with the Adreno 5xx GPU architecture, allowing for real-time low light video capture and camera functionality to improve the experience of end consumers.

Finally, the X12 LTE Modem allows all of this hardware to run efficiently on high performance networks, both cellular and Wi-Fi. The X12 features CAT 12 LTE downlink speeds for up to 600 Mbps, and CAT 13 on the uplink for up to 150 Mbps. LTE connectivity isn’t the only new thing here, there is also tri-band Wi-Fi supporting 2×2 MU-MIMO.

With that background in mind, what does it all mean for the end user? Qualcomm has adopted the same philosophy that companies like Apple have over the last several years – focus less on benchmarks and more on user experience. It's much more difficult to quantify, of course, but the demonstrations I had time with today are meant to do just that. 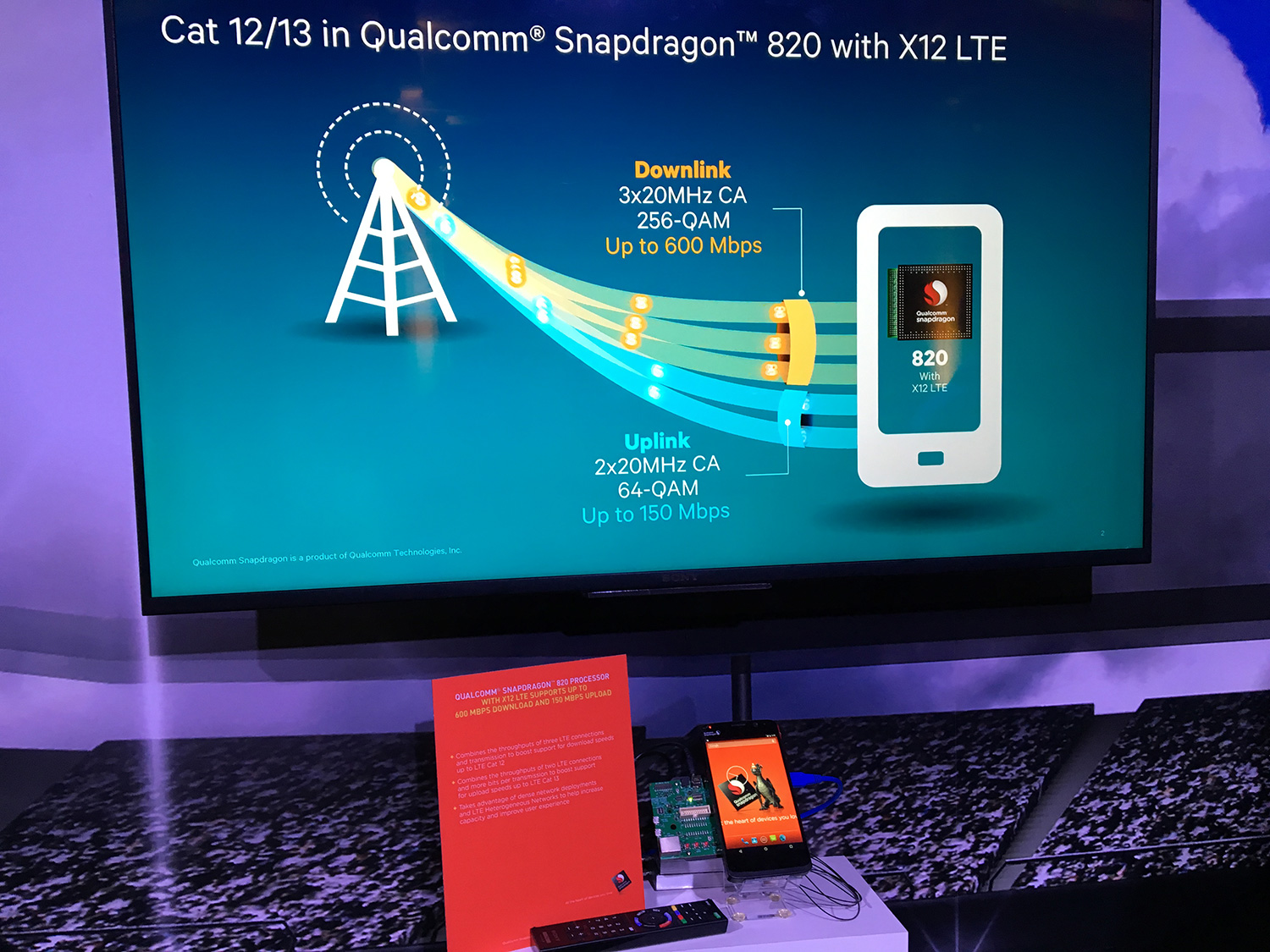 First up was a demonstration of the X12 modem at work and proving that taking advantage of 600 mbps of downstream and 150 mbps of upstream bandwidth is feasible and coming sooner than we think. Through the use of carrier aggregation (utilizing more than one LTE connection at the same time) the SD 820 reference phone was able simultaneously download at nearly 600 mbps while uploading at the peak rate as well. This kind of bandwidth, though not utilized by any carrier in the US today, would allow users in crowded areas like concerts and stadiums to download/upload the content they want quickly, then get off the network right away, freeing the spectrum up for other users. Think of it as a "hurry up and wait" ideology applied to LTE networks. 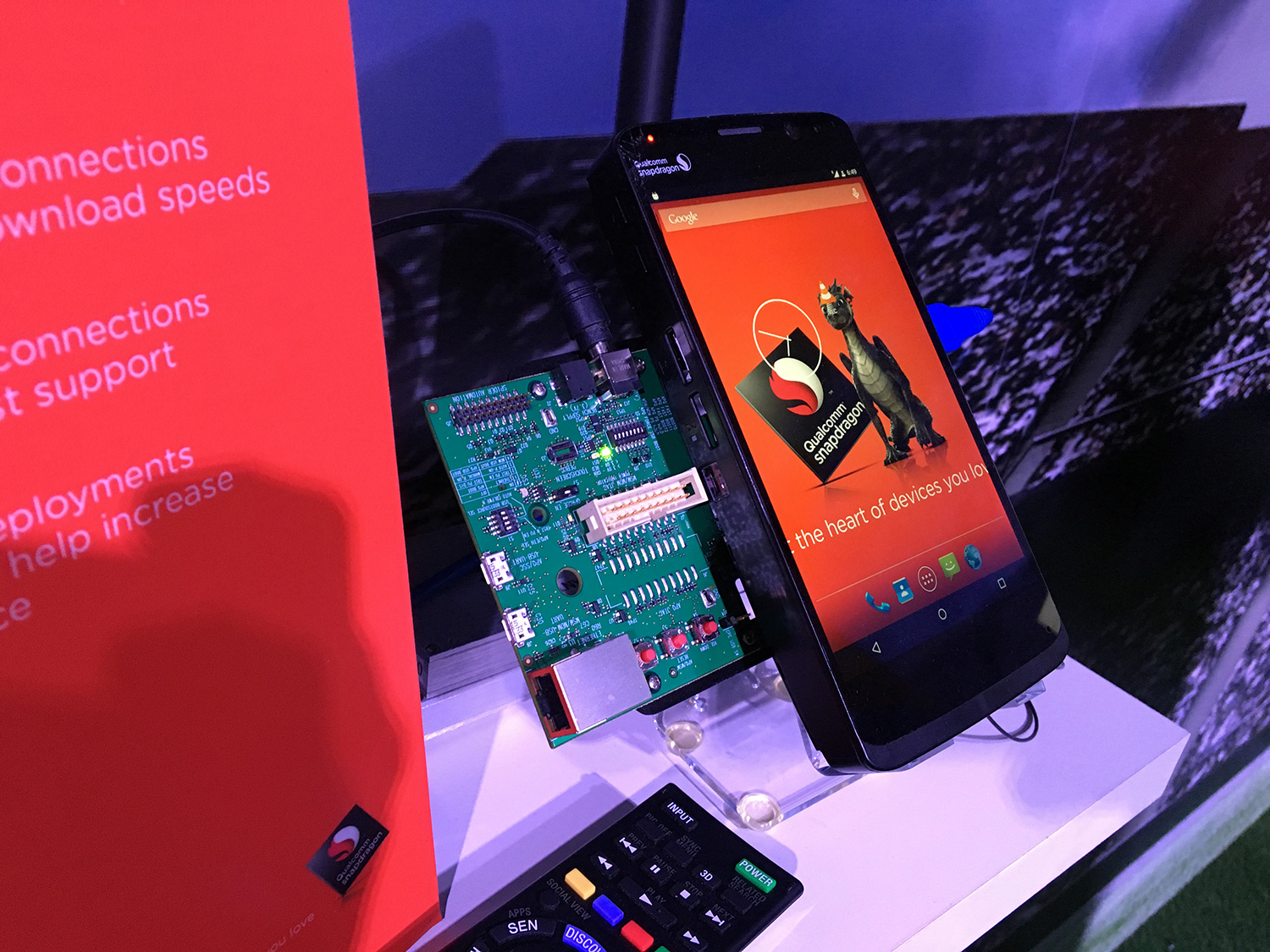 One of the updated capabilities for the X12 modem is improved support for Wi-Fi calling, in particular the adaptive exchange capability. While some carriers and phones support Wi-Fi calling today, it is very much a one direction exchange – you can go from LTE to Wi-Fi but going the other direction can be problematic at best. Qualcomm is now able to not only switch to Wi-Fi calling, but is able to monitor the Wi-Fi connection quality (by ping QC's own servers) to decide when to switch to it from LTE and when to switch back. This happens completely seemlessly to the end user and is compatible with any network that supports VoLTE. 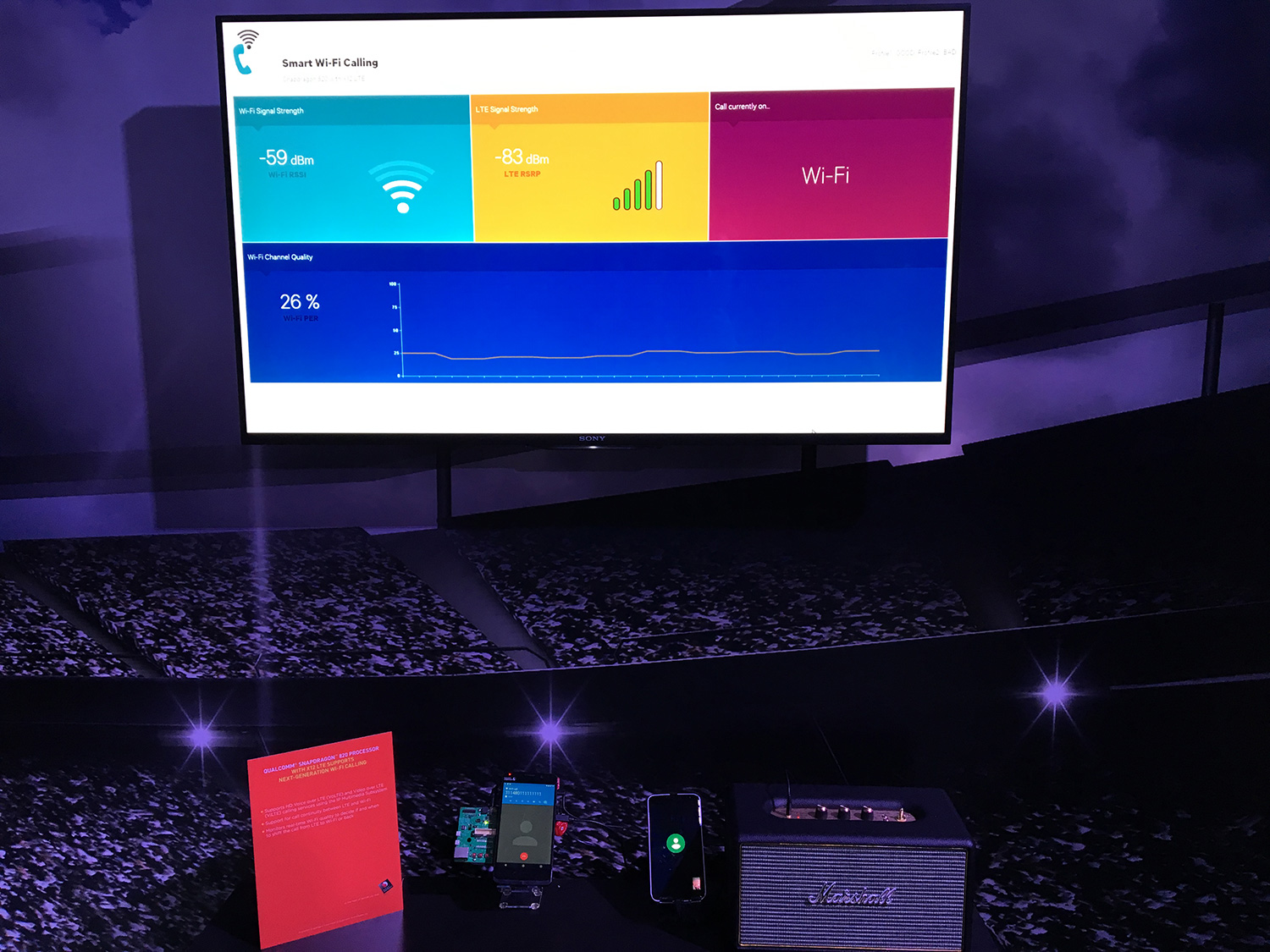 The Qualcomm Antenna Boost feature will finally keep us from screwing up our battery life and call quality by holding our phones wrong; I'm serious. Using a chip that sits between the antenna and the SoC itself, Qualcomm is able to adjust the impedance reception of the wireless signal that can be altered by things like your hand or a metal table it might be sitting on. The demonstration I saw included a block to simulate hand placement and the feature was enabled/disabled in software. The results were impressive – going from a choppy call that you would likely just hang up on to a steady data stream that was of the same audio quality you should expect. 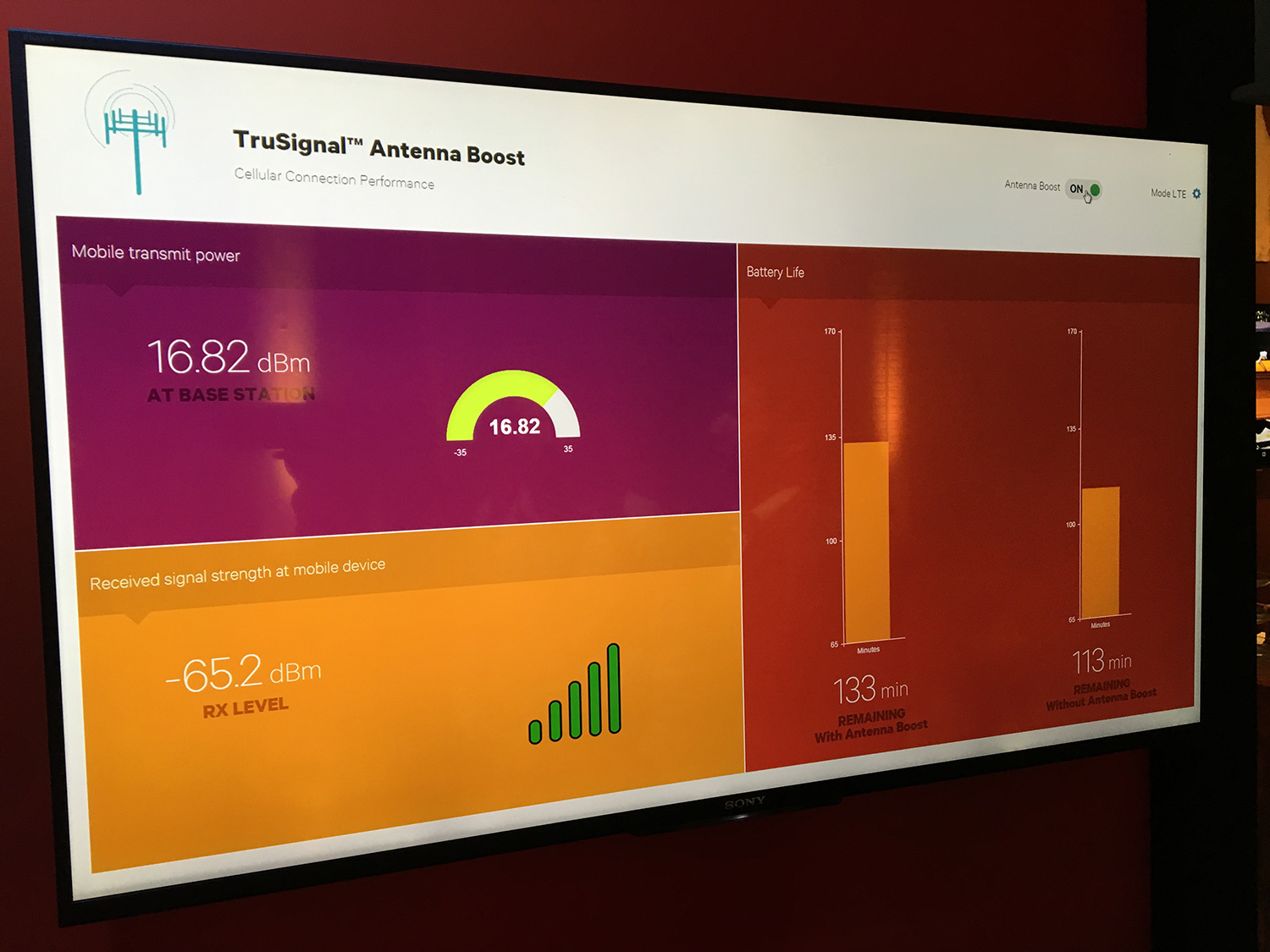 Even better, not only does this new feature increase audio quality and signal reliability, it will improve battery life at the same time. Qualcomm claims that matching impedance between the phone and the incoming signal puts less strain on the signal processor and can save as much as 20% of your battery while in active use. 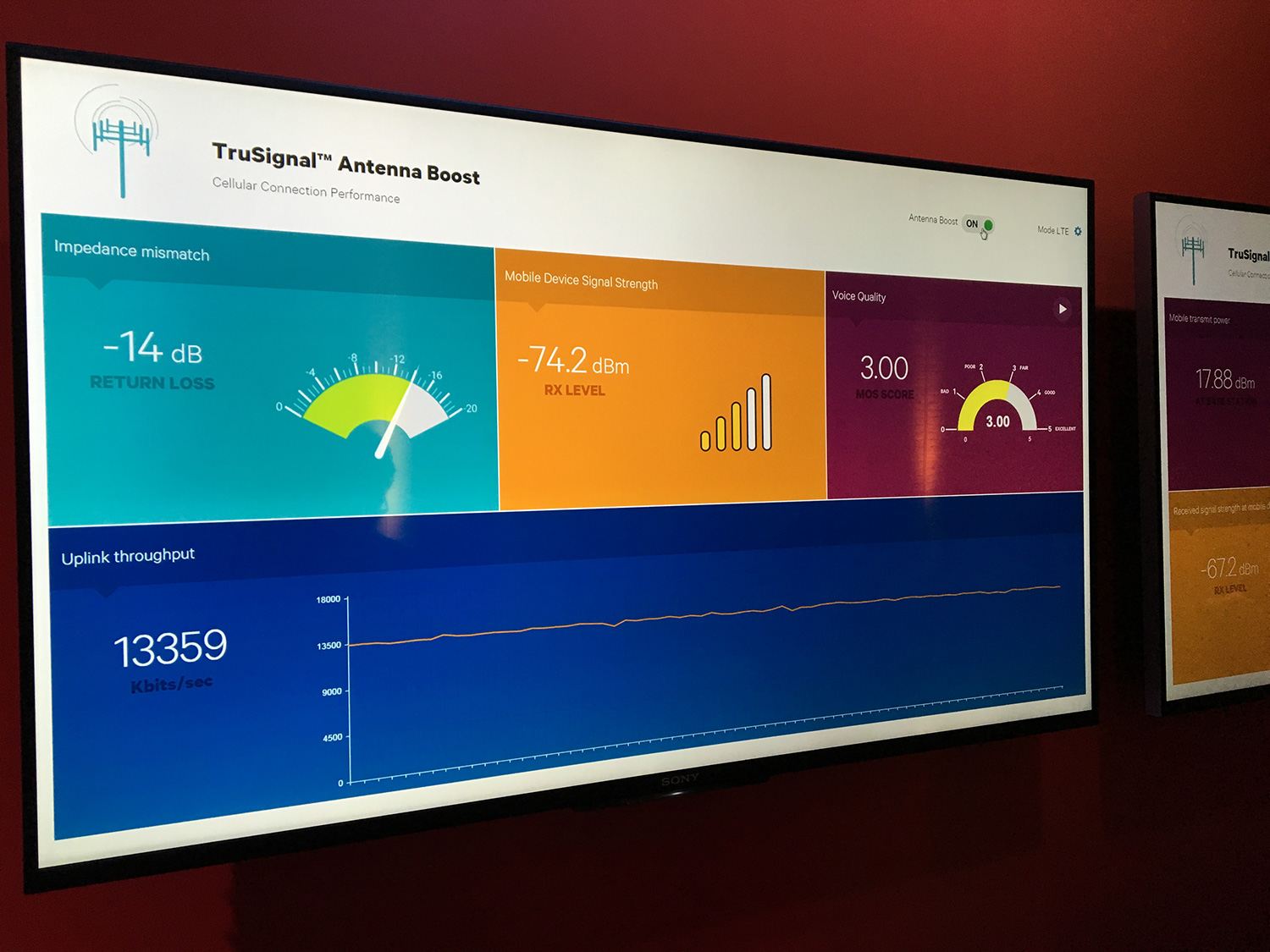