The Exynos 8 Octa 8890 is built on Samsung’s 14 nm FinFET process like the previous Exynos 7 Octa 7420, and again is based on the a big.LITTLE configuration; though the big processing cores are a custom design this time around. The Exynos 7420 was comprised of four ARM Cortex A57 cores and four small Cortex A53 cores, and while the small cores in the 8890 are again ARM Cortex A53, the big cores feature Samsung’s “first custom designed CPU based on 64-bit ARMv8 architecture”. 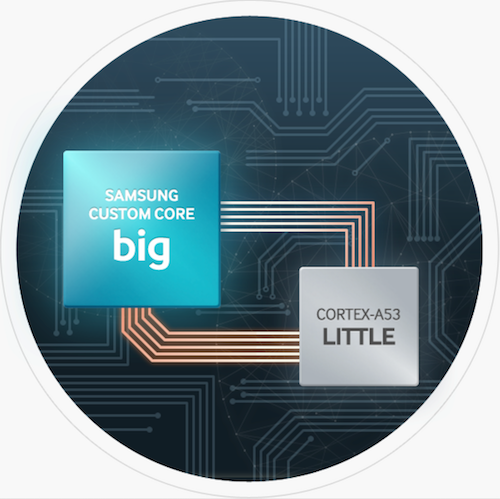 Another big advancement for the Exynos 8 Octa is the integrated modem, which provides Category 12/13 LTE with download speeds (with carrier aggregation) of up to 600 Mbps, and uploads up to 150 Mbps. This might sound familiar, as it mirrors the LTE Release 12 specs of the new modem in the Snapdragon 820.

Samsung will be taking this new SoC into mass production later this year, and the chip is expected to be featured in the company’s upcoming flagship Galaxy phone.

The Exynos 8 Octa is Samsung’s first application processor to include the company’s initial premium custom CPU cores based on 64-bit ARMv8 architecture providing over 30 percent improvement in performance and 10 percent in power efficiency compared to the Exynos 7 Octa. This chip also supports enhanced heterogeneous multiprocessing for efficient usage of the eight cores, four custom and four ARM® Cortex®-A53, to deliver the highest performance and power efficiency in its class.

The Exynos 8 Octa is Samsung’s first integrated one-chop solution in its premium line-up that combine the application processor and modern. Samsung has delivered one-chip Exynos solutions for mid to high-end smartphone in recent years. The Exynos 8 Octa integrated the most advanced LTE Rel.12 Cat.12/13 modem that enables maximum download speed of up to 600Mbps (Cat.12) and upload speed of up to 150Mbps (Cat.13) with carrier aggregation. With such a high data transfer rate, the Exynos 8 Octa will contribute to delivering an excellent mobile experience, allowing users to enjoy and share high resolution video content on the go with ease. Also the one-chip solution benefits OEMs with a reduced number of parts needed and overall space required for a device, allowing more flexible design options.

Samsung plans to begin mass production of the Exynos 8 Octa in late 2015.