We spent some time (and money) to buy some cases that require the size of AMD’s miniature R9 Nano.

Thanks to Sebastian for helping me out with some of the editorial for this piece and to Ken for doing the installation and testing on the system builds! -Ryan

While some might wonder where the new Radeon R9 Nano fits in a market that offers the AMD Fury X for the same price, the Nano is a product that defines a new category in the PC enthusiast community. It is a full-scale GPU on an impossibly small 6-inch PCB, containing the same core as the larger liquid-cooled Fury X, but requiring 100 watts less power than Fury X and cooled by a single-fan dual-slot air cooler.

The R9 Nano design screams compatibility. It has the ability to fit into virtually any enclosure (including many of the smallest mini-ITX designs), as long as the case supports a dual-slot (full height) GPU. The total board length of 6 inches is shorter than a mini-ITX motherboard, which is 6.7 inches square! Truly, the Nano has the potential to change everything when it comes to selecting a small form-factor (SFF) enclosure. 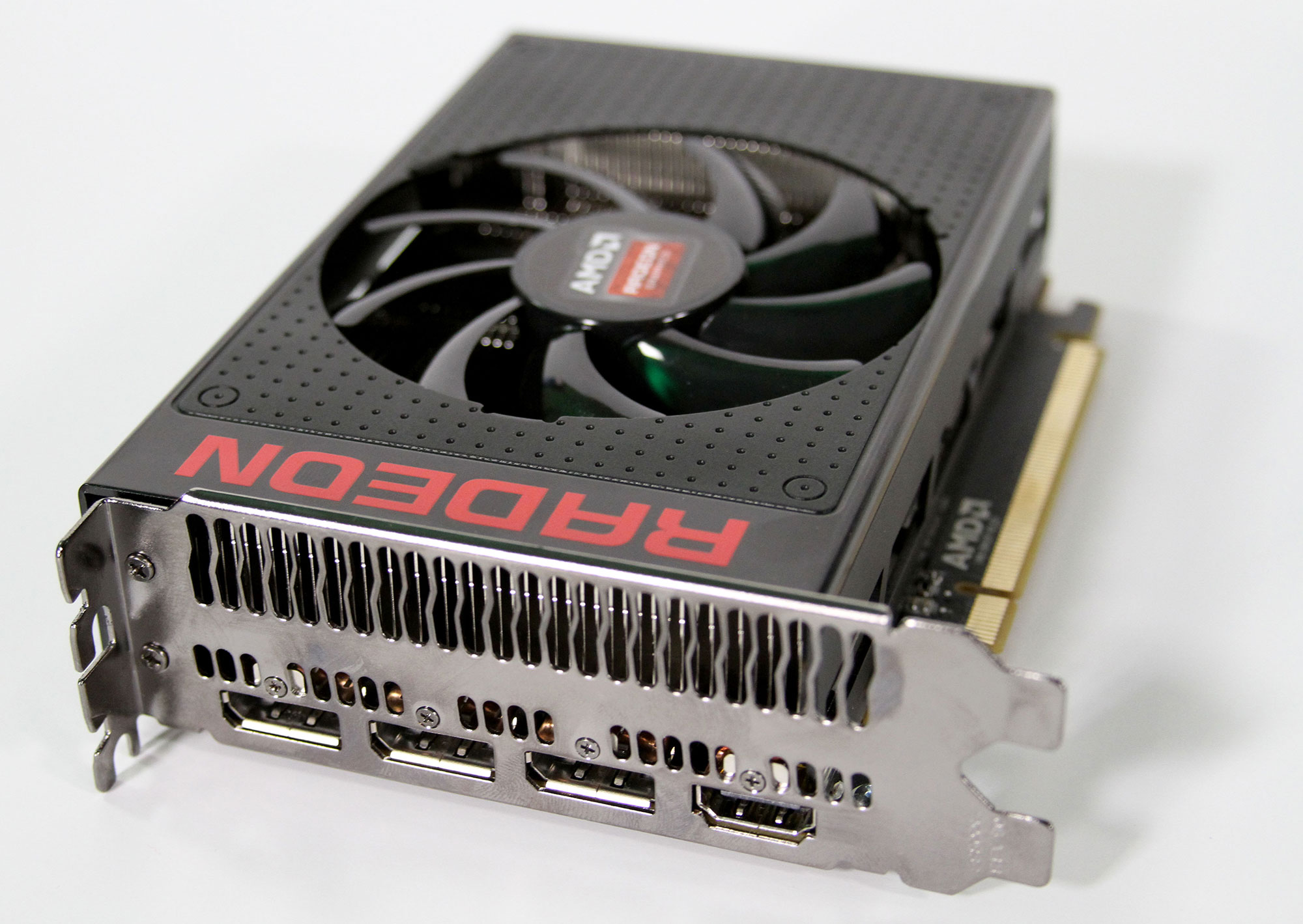 Typically, a gaming-friendly enclosure would need at minimum a ~270 mm GPU clearance, as a standard 10.5-inch reference GPU translates into 266.7 mm in length. Even very small mini-ITX enclosures have had to position components specifically to allow for these longer cards – if they wanted to be marketed as compatible with a full-size GPU solution, of course. Now with the R9 Nano, smaller and more powerful than any previous ITX-specific graphics card to date, one of the first questions we had was a pretty basic one: what enclosure should we put this R9 Nano into?

With no shortage of enclosures at our disposal to try out a build with this new card, we quickly discovered that many of them shared a design choice: room for a full-length GPU. So, what’s the advantage of the Nano’s incredibly compact size? It must be pointed out that larger (and faster) Fury X has the same MSRP, and at 7.5 inches the Fury X will fit comfortably in cases that have spacing for the necessary radiator.

Finding a Case for Nano

While even some of the tiniest mini-ITX enclosures (EVGA Hadron, NCASE M1, etc.) offer support for a 10.5-in GPU, there are several compact mini-ITX cases that don’t support a full-length graphics card due to their small footprint. While by no means a complete list, here are some of the options out there (note: there are many more mini-ITX cases that don’t support a full-height or dual-slot expansion card at all, such as slim HTPC enclosures):

The list is dominated by Lian Li, who offers a number of cube-like mini-ITX enclosures that would ordinarily be out of the question for a gaming rig, unless one of the few ITX-specific cards were chosen for the build. Many other fine enclosure makers (Antec, BitFenix, Corsair, Fractal Design, SilverStone, etc.) offer mini-ITX enclosures that support full-length GPUs, as this has pretty much become a requirement for an enthusiast PC case.

While I’m all for full GPU compatibility as a system builder, the appeal of a super compact enclosure with a footprint no larger than a 6.7-in square mini-ITX motherboard, that also supports a powerful GPU like the R9 Nano, is undeniable. I’ll be interested to see if the enclosure industry reacts, but that will depend on the success of AMD’s newest GPU (and subsequent competition).

It should be noted that just because we put a case on that list above, it does not guarantee that it will work correctly with the R9 Nano. As I will demonstrate below (and in the video above), there are other concerns than space to watch out for when picking a compact chassis.

For this project I ordered in a few of the cases from the list above that interested me to build a powerful mini ITX gaming system inside each. The goal was simple: prove that you can assemble one of the fastest gaming and enthusiast PCs in cases that would otherwise be limited to much slower GPUs.

Other than the cases you'll see listed below, I decided to get some impressive SFF componentry to make the builds stand out. That includes an Intel Core i7-6700K Skylake quad-core processor, the flagship of the consumer brand from Intel, a Noctua NH-L9x65 low profile CPU cooler, 250GB SSD, 16GB of DDR4 memory and a retail purchased Radeon R9 Nano graphics card from XFX. 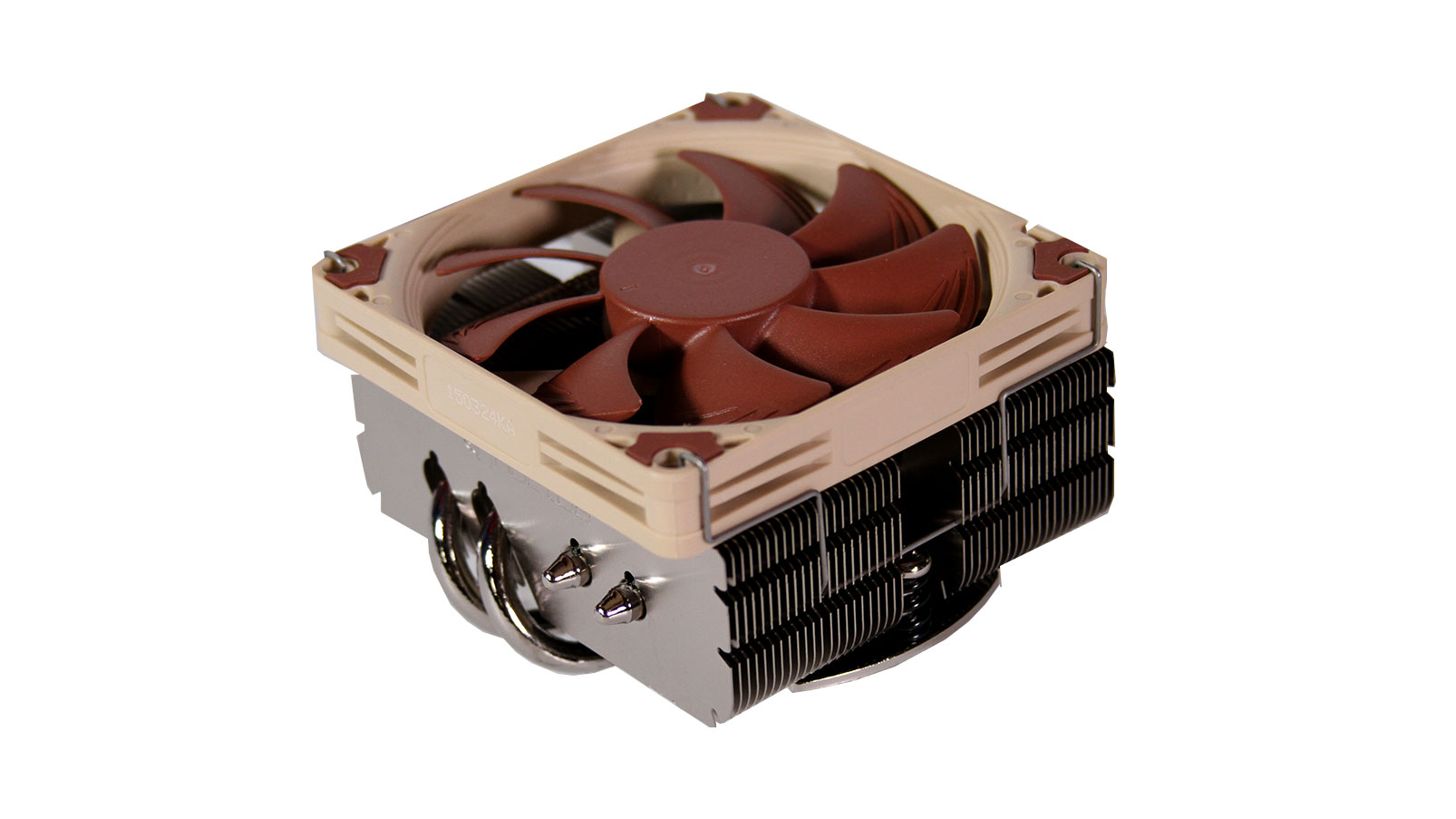 To keep it all together we are using the brand new MSI Z170I Gaming Pro AC motherboard that packs a performance and feature punch in a Mini ITX form factor. It includes 802.11ac wireless connectivity, Intel-powered Gigabit networking, M.2 storage support, USB 3.1 and full overclocking support should your CPU cooler support it. 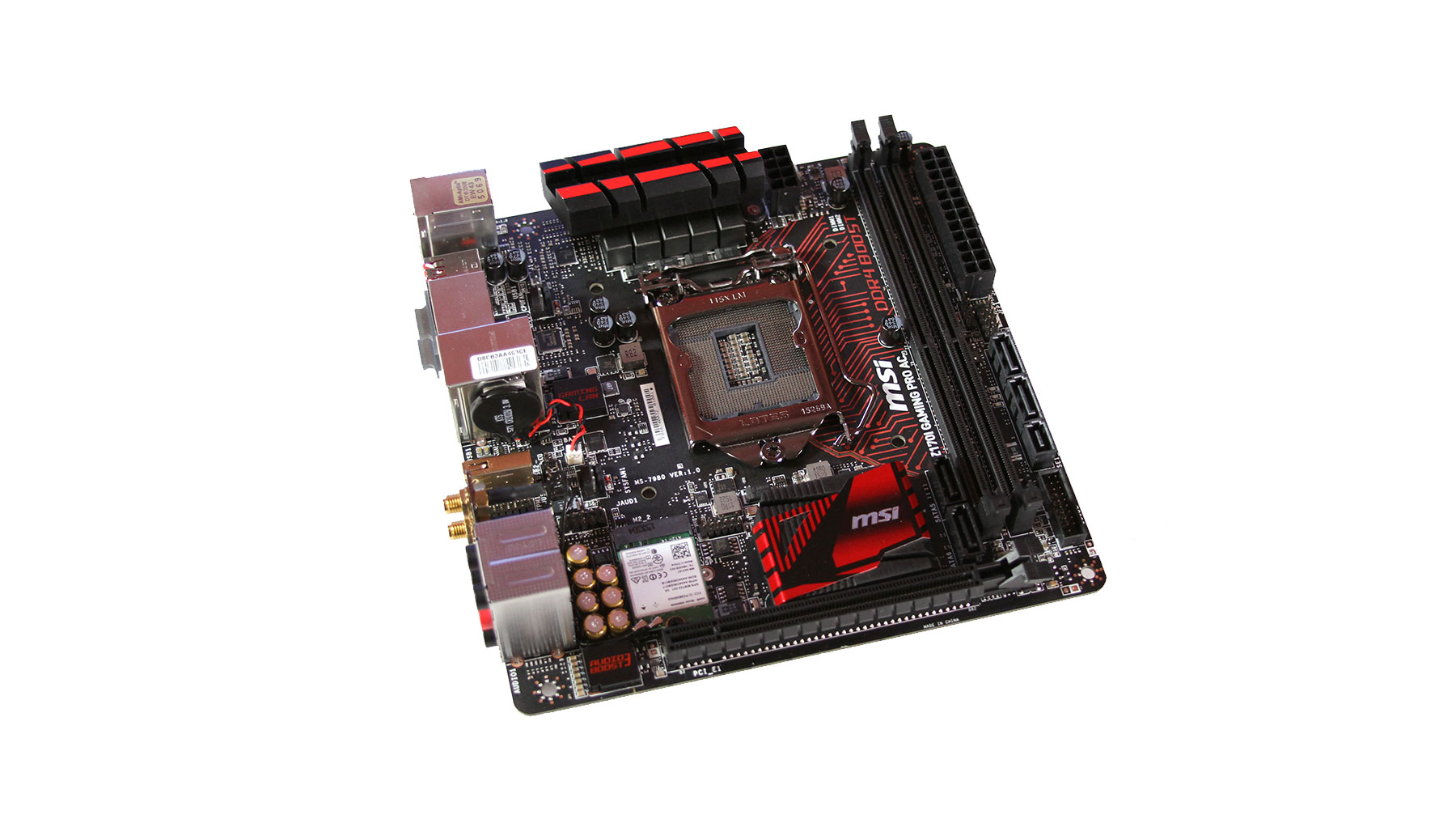 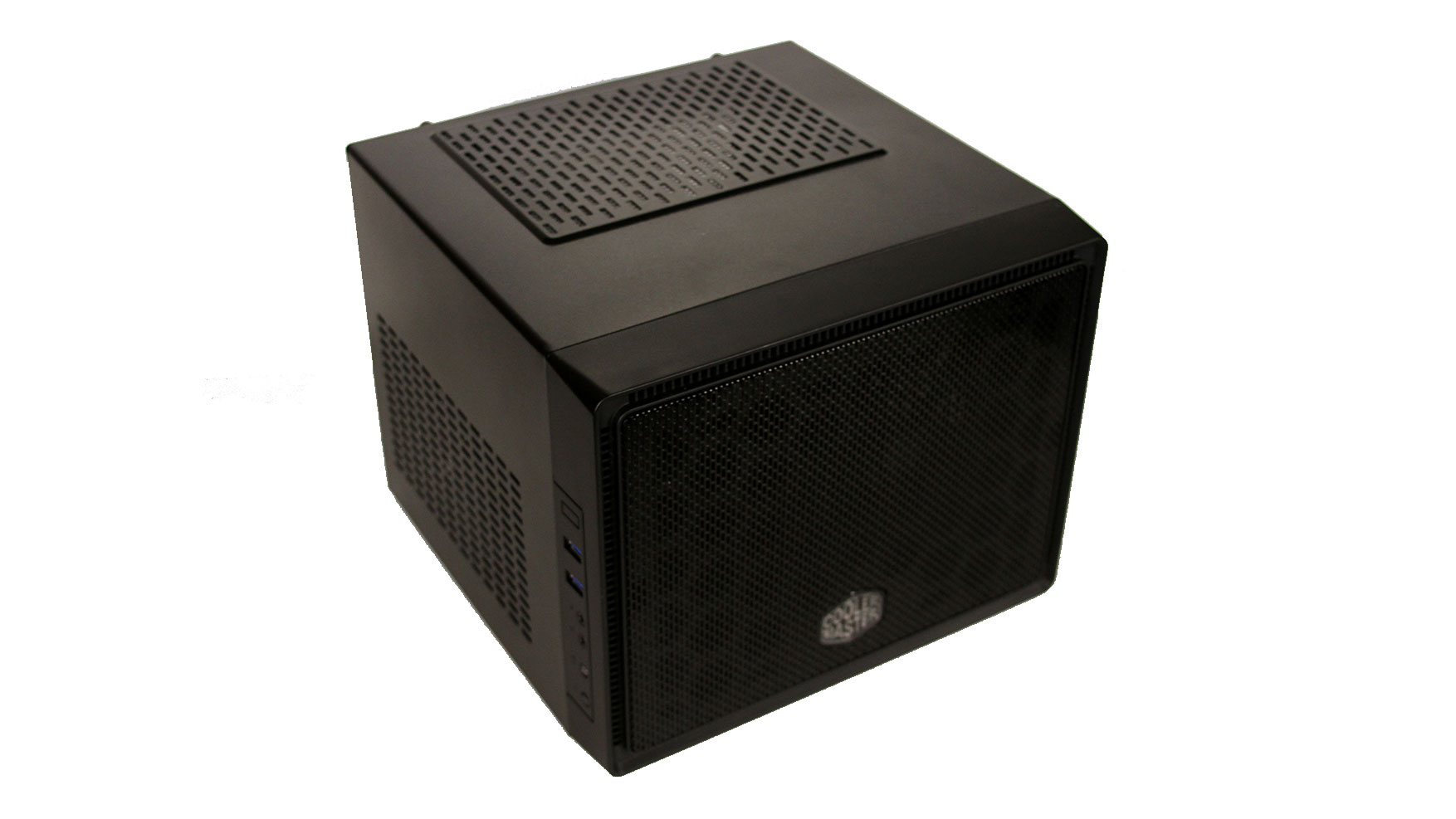 At just $40 or so, the CM Elite 110 is a fantastic mini ITX case and was the chassis we used in our initial R9 Nano review to test enclosed performance. The design is straight forward and you can use a standard ATX power supply (that sticks out the back of the case some) though it does mean you will have very little space between the top of the CPU cooler and the bottom of that PSU. Building in the Elite 110 was as easy as most other mini ITX cases (which is, by definition, not fantastic) and the short but wide form factor presents a unique appearance. 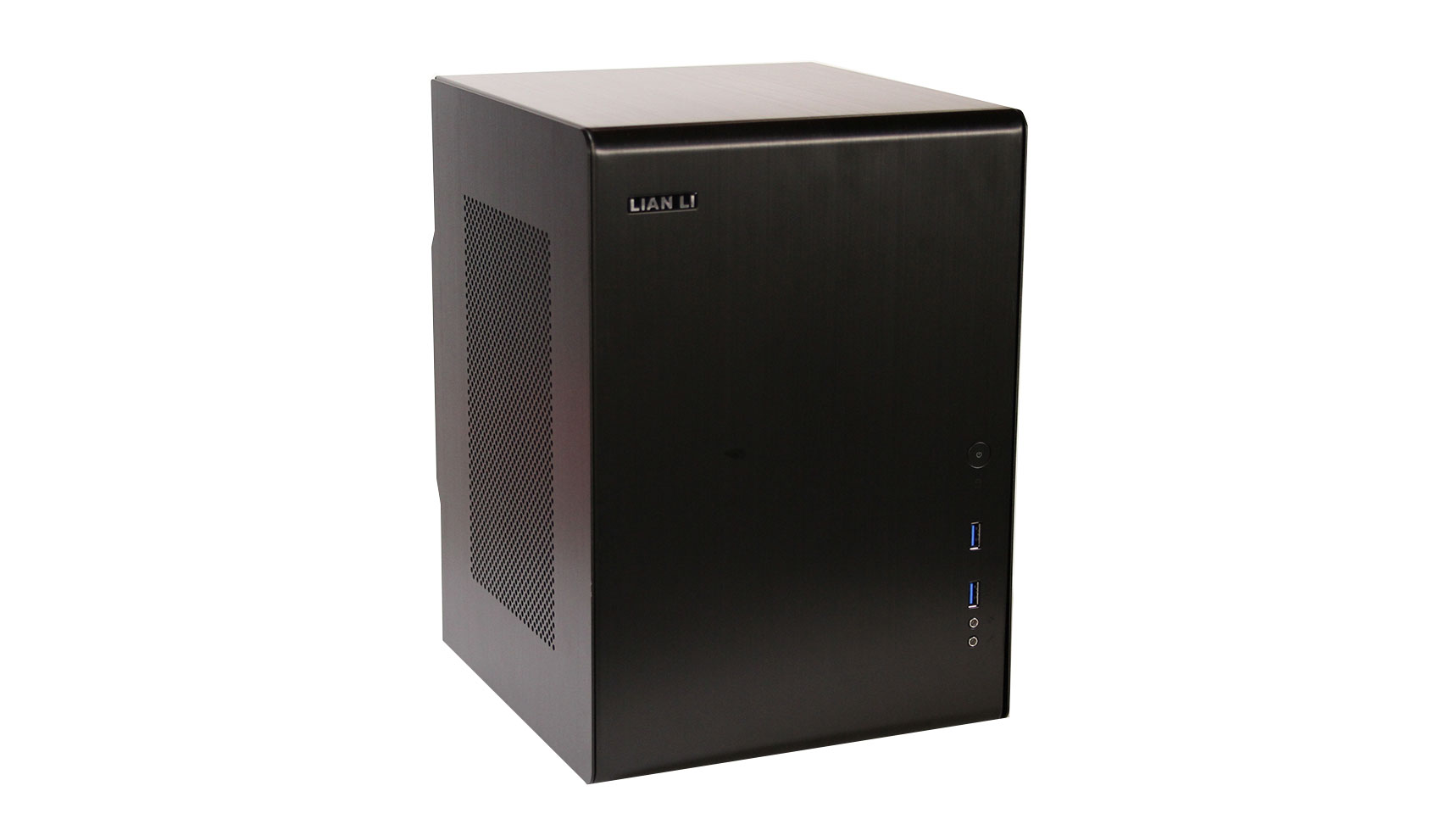 This Lian Li option offers a compelling feature for builders: the front and top of the case actually open forward on a hinge once the side panels are snapped off. This makes building in the small form factor easier than with any other case we have used, just be sure you tuck all the power and data cables well so they don't interfere with other components (fans, etc.) when you open and close it. It's important that you get the non-windowed version of this case to allow for air intake for the R9 Nano cooler, despite your desire to show off the goods. 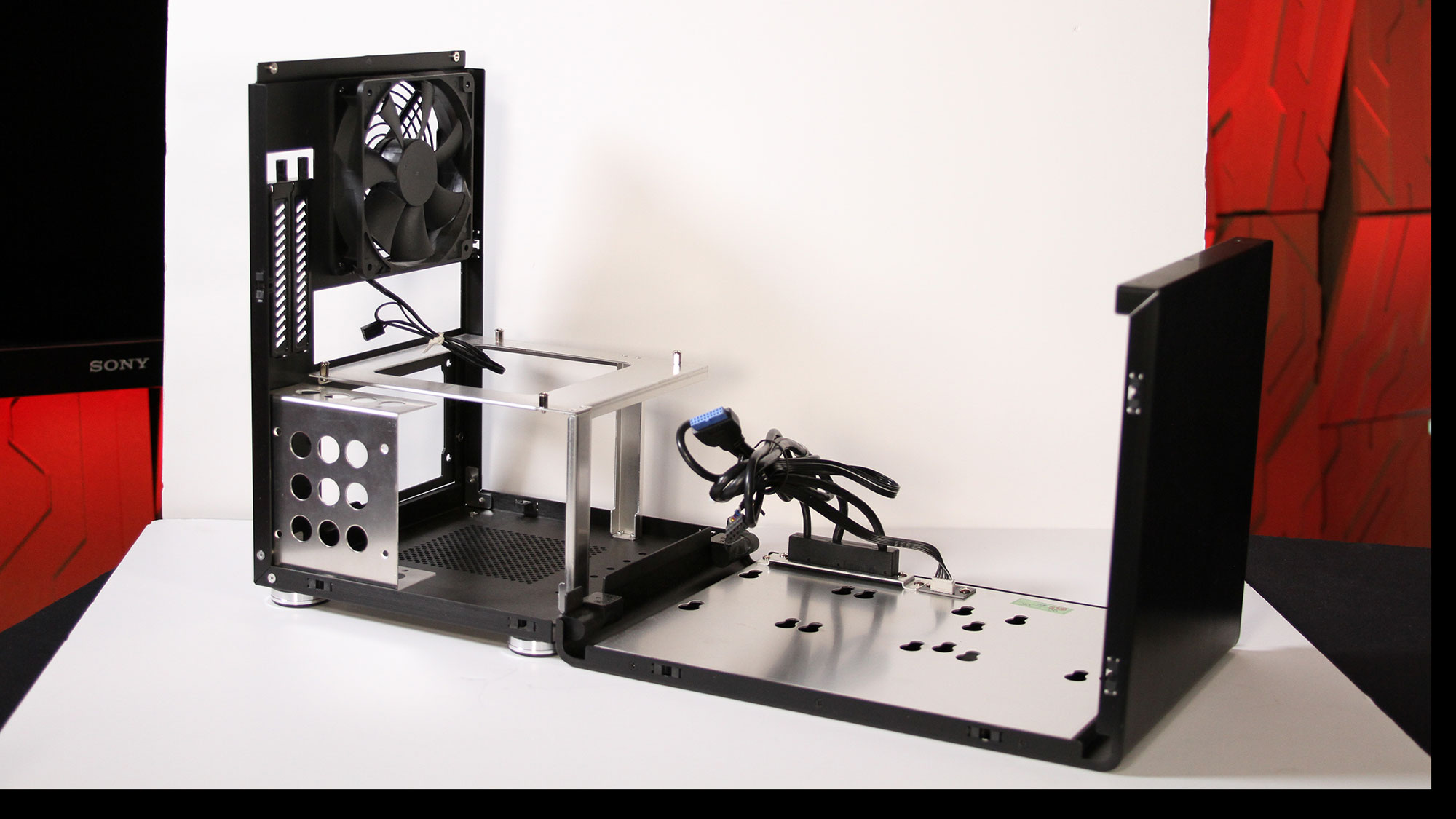 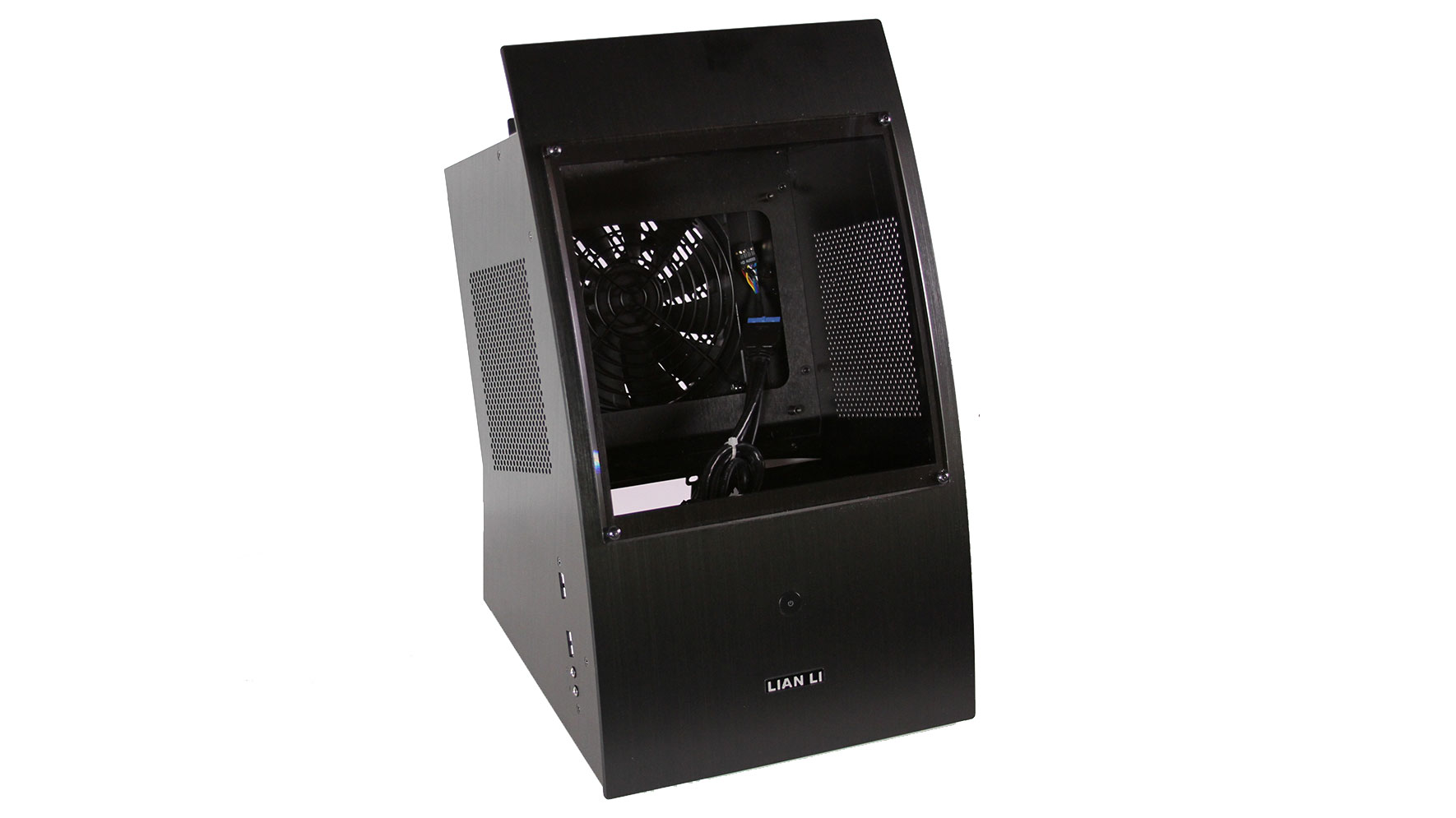 By far the most interesting looking of the cases tested, the Q30X with its curved window on the front allows for easy viewing of all the components inside, which is great as long as you take time with your build and clean things up accordingly. This case does require an SFX power supply (a form factor that limits your PSU selection) but the rest of the construction process was simple. Note that this is the only case that cannot support a 3.5-in hard drive: 2.5-in only here. If you want a mini ITX case that will demand attention from visitors but still allows for impressive gaming performance thanks to the R9 Nano, this is the way to go. 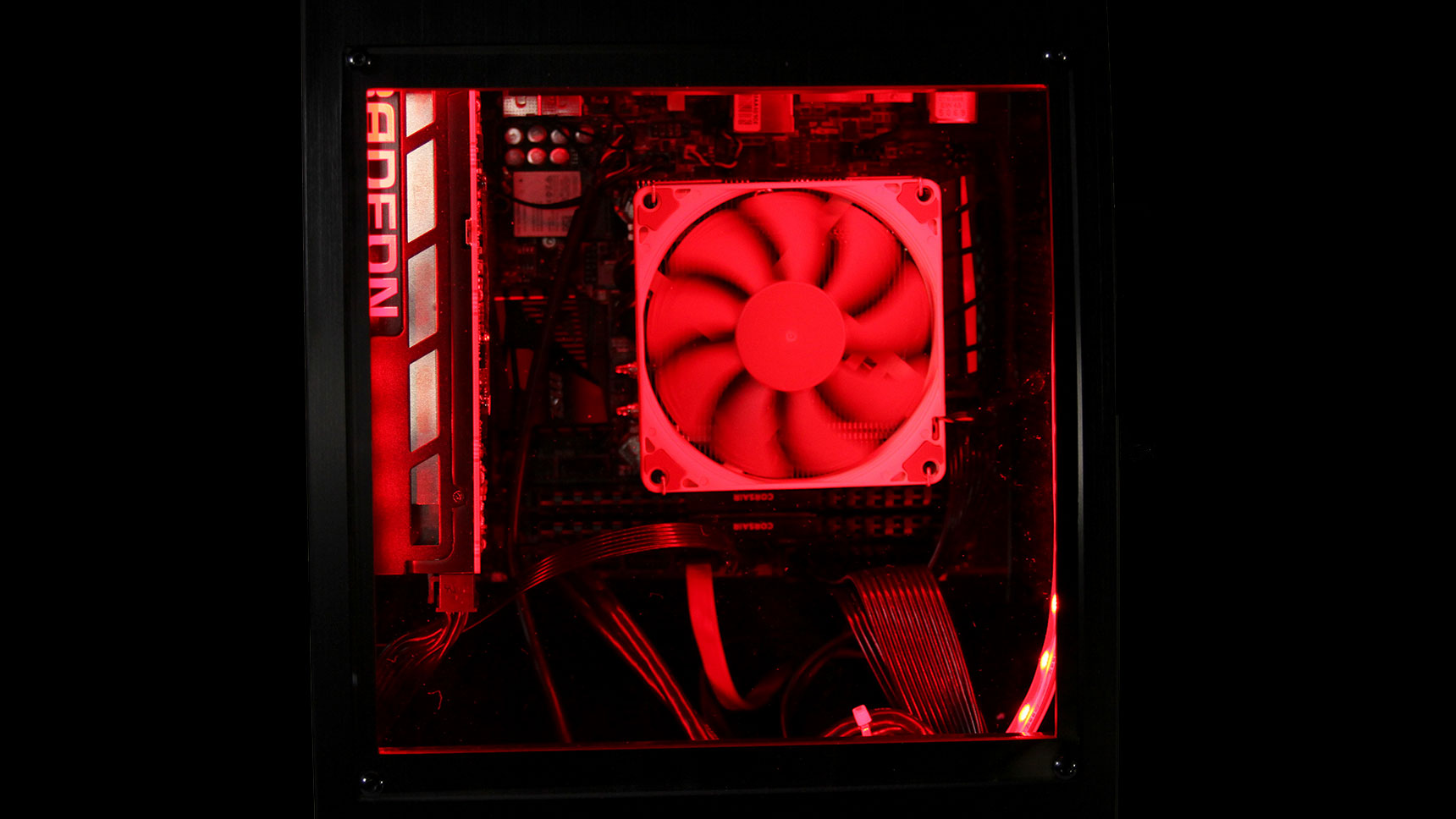 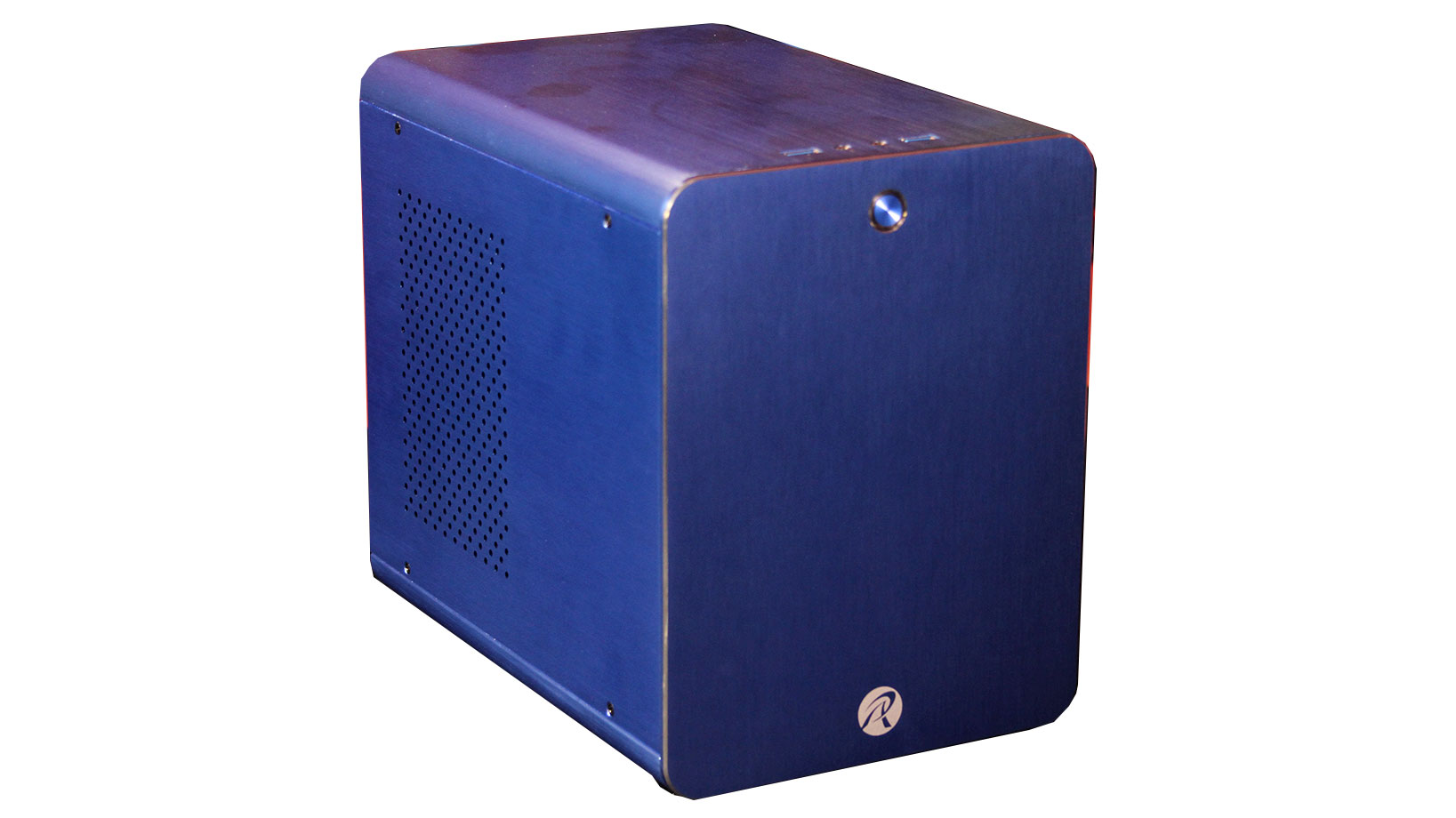 With a blue brushed aluminum finish, the Metis is attractive but has some issues we need to get past. First, building in the case was difficult - it can support a full size ATX power supply but it mounts on the front of the chassis and uses an internal extension to route power to the back of the case. The MB/GPU are mounted upside down and the window is a bit smaller than we'd like if you are going to show off your new system build.

The biggest problem was airflow - the R9 Nano did not have access to cool air intake near the GPU fan - the card was jammed along the top panel of the case with no ventilation holes to be found. The result was a R9 Nano GPU clock speed that throttled horribly after just about 10 minutes of gaming. 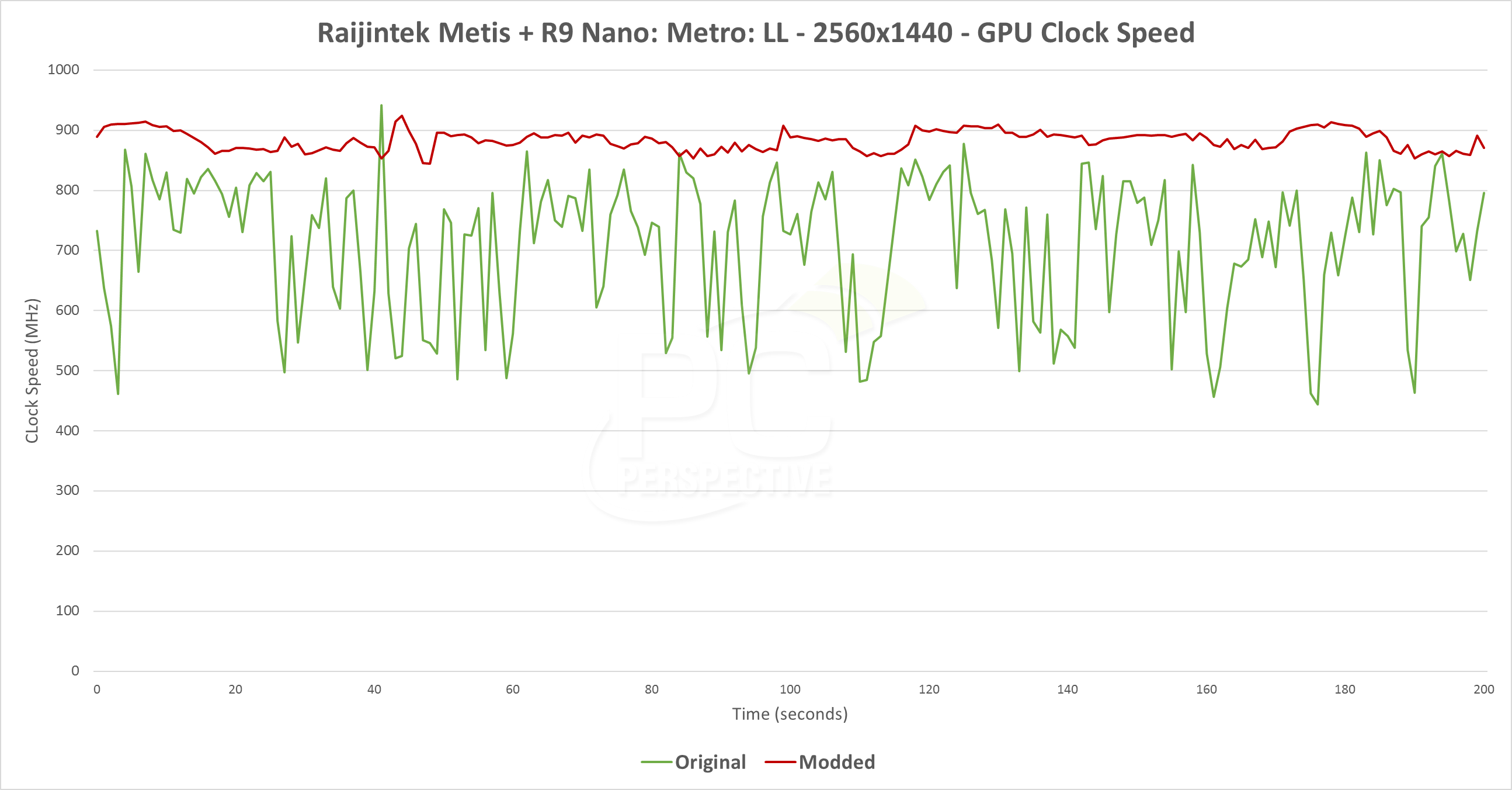 The fix? We sent the top panel home with Allyn to use his drill press and punch about 50 holes along the top. It solved the problem - after reinstalling the system it ran without issue and maintained the expected clock speeds for the R9 Nano. 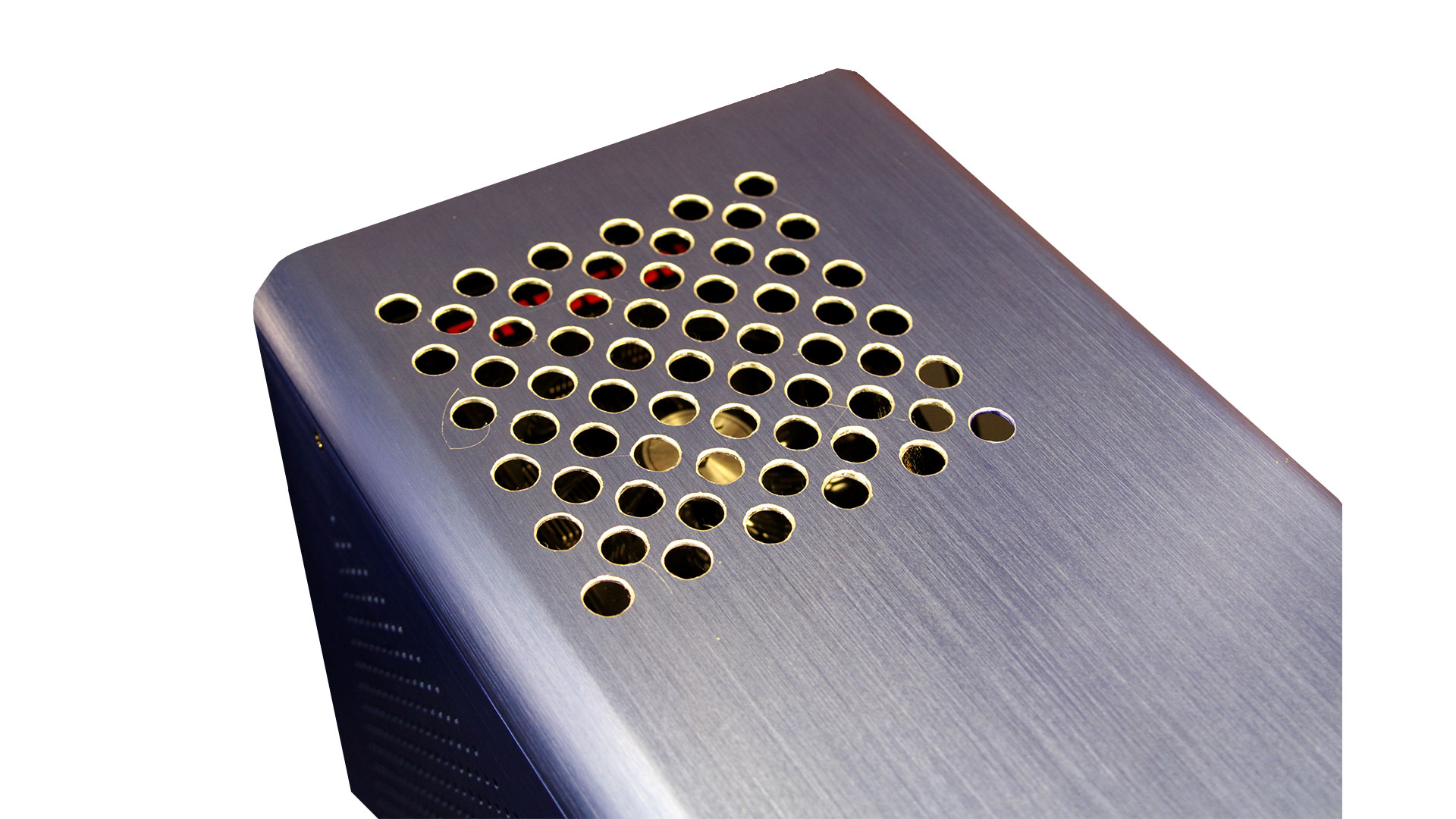 This is the message our experience provides: just because the case supported the dimensions of the Radeon R9 Nano doesn't mean that it had the airflow design to support it. Chances are if you find a case you love that does exhibit similar behavior, you'll be able to mod in a fix (probably cleaner than ours) but you need to be willing to accept that possibility.

What does our little experiment tell us - is the Radeon R9 Nano the perfect GPU for everyone? Clearly not. Unless you have a system build or a custom mod that you want to do that requires the small size of the Nano's 6-in PCB, you are better off with another GPU including other Fiji products like the Fury and Fury X. The systems we built in the video above prove though that if you want to, you can get gaming performance that is nearly unrivaled in any consumer built system in small mini ITX form factor thanks to products like the MSI Z170I Gaming Pro AC and the AMD Radeon R9 Nano.