The Radeon Technologies Group had a select few media member in Sonoma last week to lay out plans for 2016.

Last week the Radeon Technology Group invited a handful of press and analysts to a secluded location in Sonoma, CA to discuss the future of graphics, GPUs and of course Radeon. For those of you that seem a bit confused, the RTG (Radeon Technologies Group) was spun up inside AMD to encompass all of the graphics products and IP inside the company. Though today’s story is not going to focus on the fundamental changes that RTG brings to the future of AMD, I will note, without commentary, that we saw not a single AMD logo in our presentations or in the signage present throughout the week.

Much of what I learned during the RTG Summit in Sonoma is under NDA and will likely be so for some time. We learned about the future architectures, direction and product theories that will find their way into a range of solutions available in 2016 and 2017.

What I can discuss today is a pair of features that are being updated and improved for current generation graphics cards and for Radeon GPUs coming in 2016: FreeSync and HDR displays. The former is one that readers of PC Perspective should be very familiar with while the latter will offer a new window into content coming in late 2016.

In just the last couple of years we have seen a spike in resolution for mobile, desktop and notebook displays. We now regularly have 4K monitors on sale for around $500 and very good quality 4K panels going for something in the $1000 range. Couple that with the increase in market share of 21:9 panels with 3440×1440 resolutions and clearly there is a demand from consumers for a better visual experience on their PCs. 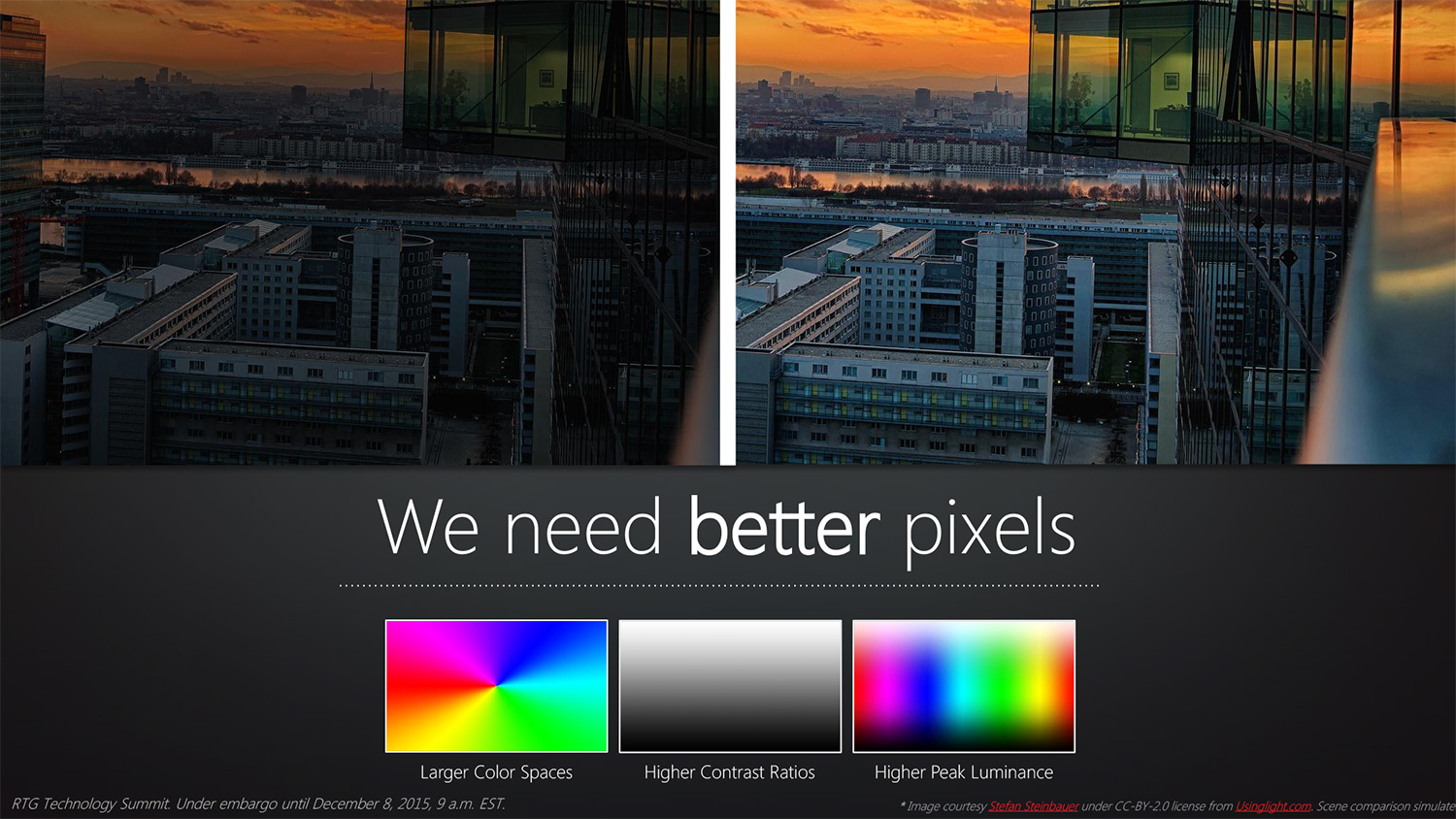 But what if the answer isn’t just more pixels, but better pixels? We already have this discussed weekly when comparing render resolutions in games of 4K at lower image quality solutions versus 2560×1440 at maximum IQ settings (for example) but the truth is that panel technology has the ability to make a dramatic change to how we view all content – games, movies, productivity – with the introduction of HDR, high dynamic range. 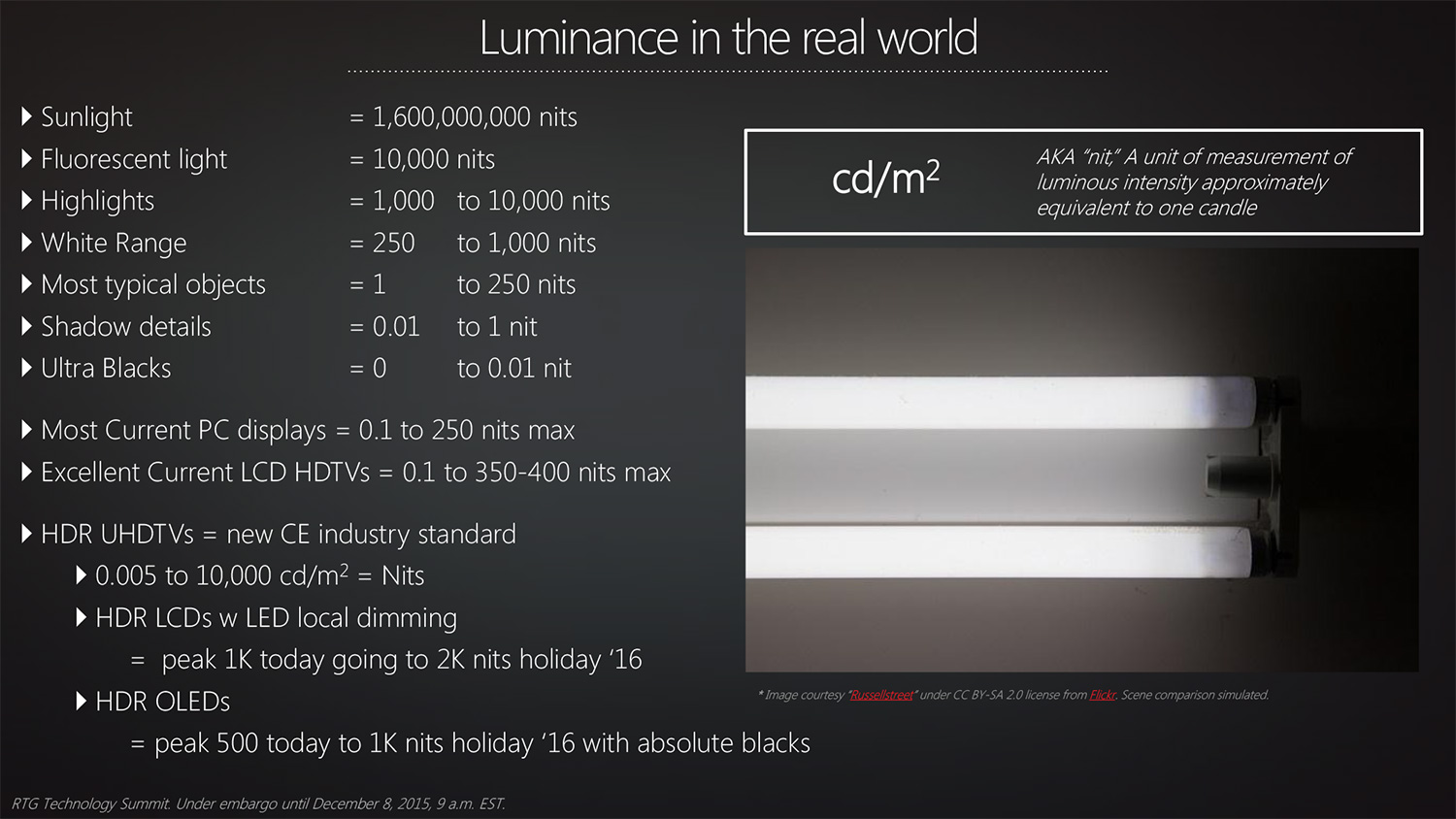 As the slide above demonstrates there is a wide range of luminance in the real world that our eyes can see. Sunlight crosses the 1.6 billion nits mark while basic fluorescent lighting in our homes and offices exceeds 10,000 nits. Compare to the most modern PC displays that range from 0.1 nits to 250 nits and you can already tell where the discussion is heading. Even the best LCD TVs on the market today have a range of 0.1 to 400 nits.

Coming in time for the holidays of 2016, AMD believes we’ll see displays capable of 2,000 peak nits on LED LCD technology and as high as 1,000 nits (with perfect blacks) on HDR OLEDs. A new industry encoding standard, 10-bit ST 1084, will provide room for future displays as high as a 10,000 nits! (Though a time frame is unknown.) 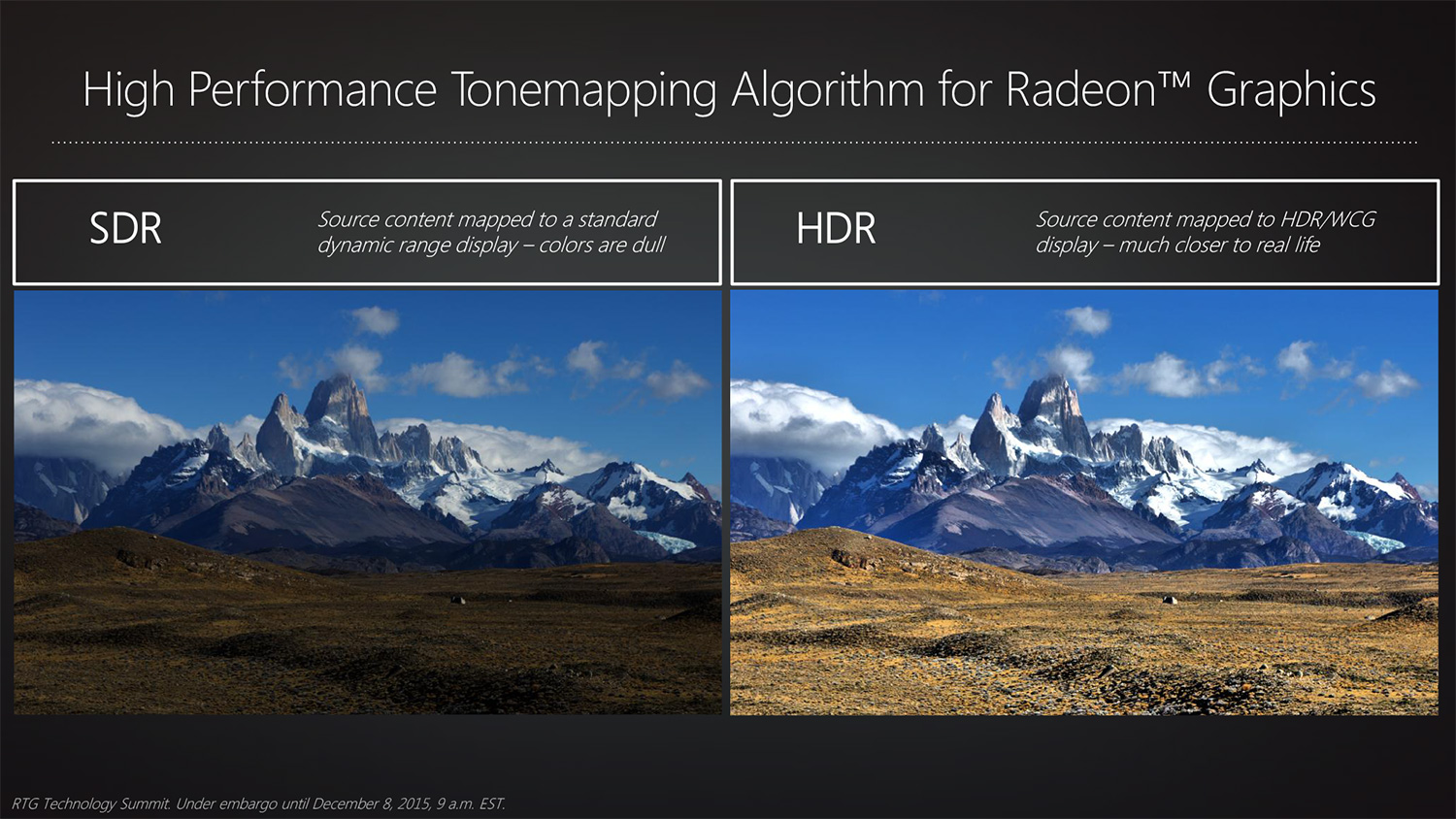 Chances are most of you remember a lot of commotion many years ago from game developers claiming to have included HDR support in their engines. Though that’s true, the images had to be tone mapped back down to the SDR color space to be displayed on current monitors, washing away much of the advantage the rendering feature provided. With the ranges of upcoming HDR TVs and monitors in the second half of 2016, that will no longer be the case – as long as game developers and GPU drivers are up to the task. 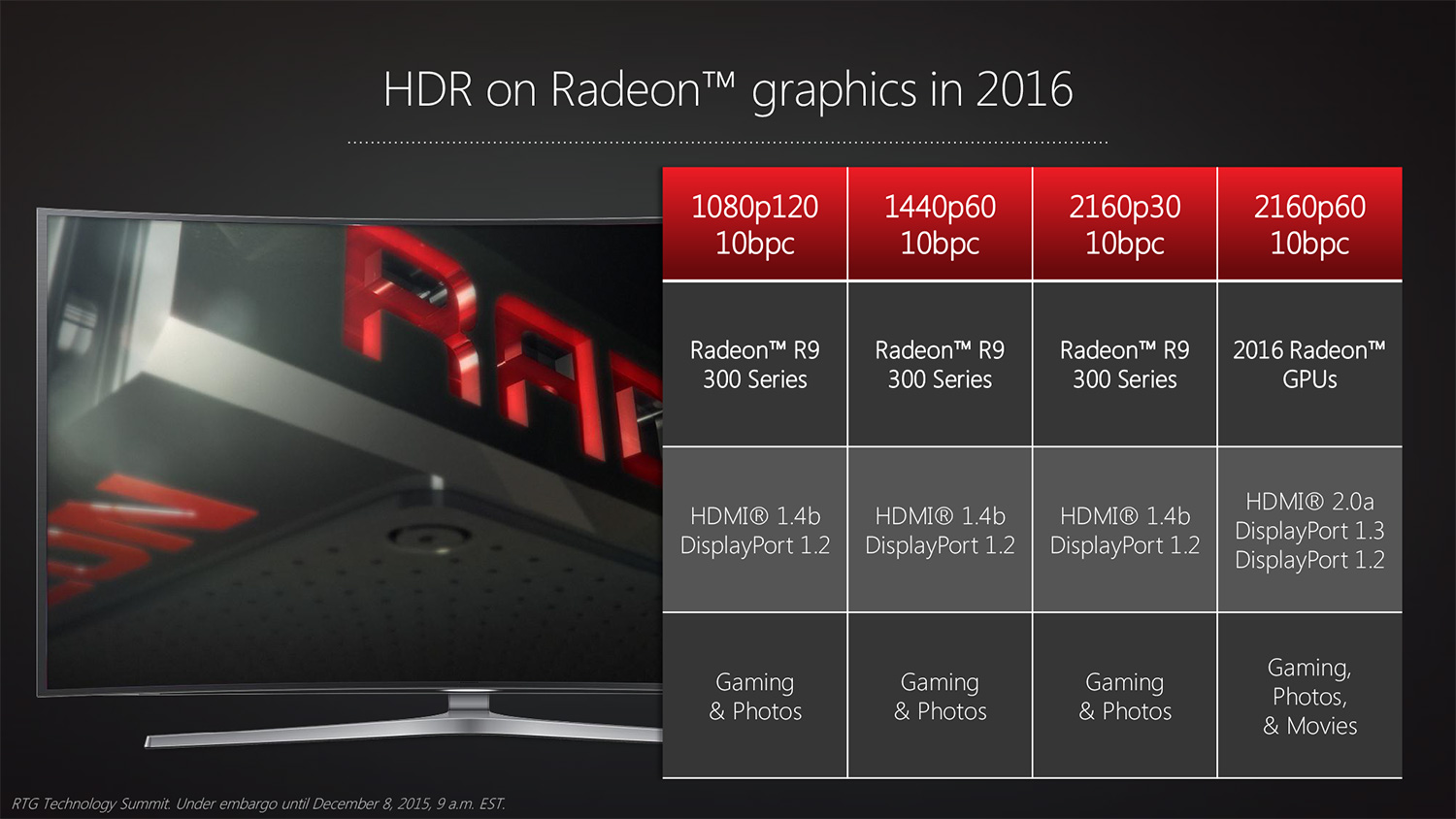 The good news is that HDR support doesn’t necessarily require a new GPU. AMD claims that all Radeon R9 300-series cards will be able to support HDR up to 4K 30FPS at 10-bits thought HDMI 1.4b and DisplayPort 1.2. To fully support 4K at 60 FPS with 10-bit color, the next-generation of Radeon GPUs will be required.

Based on what I saw and how RTG is talking, most believe that 1080p + HDR will be a better user experience than 4K + SDR. If so, that means that GPU horsepower requirements would be lower than expected in the coming year – a good thing for gamers that don’t have an unlimited budget.

The Radeon Technologies Group was quick to talk about the successes for FreeSync for the Radeon brand as well. Though the table above is not a total picture of the current ecosystem, it is a solid direction that AMD is on – more partners, more displays, and more flexible displays with multiple inputs. The table does not mention unit sell through and how many people are actually using the monitors with VRR technology, something that NVIDIA will likely follow up with in the coming weeks. 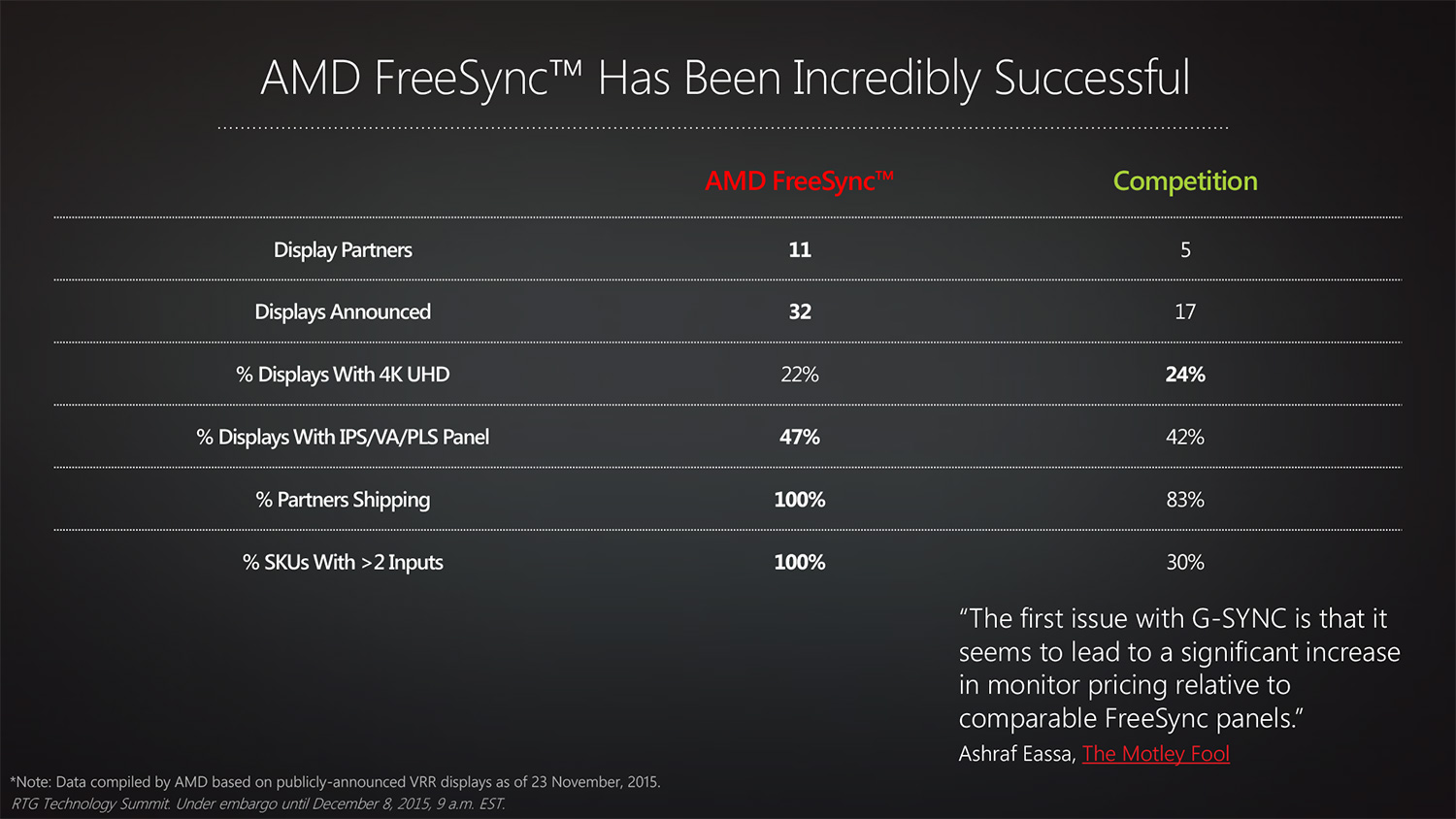 The Radeon group went over the progress of FreeSync as well, starting with initial release in March of this year, support for Overdrive in some models in June, a 30-144Hz panel in August and more recently, added support for low framerate compensation added in the Radeon Software Crimson Edition release last month. 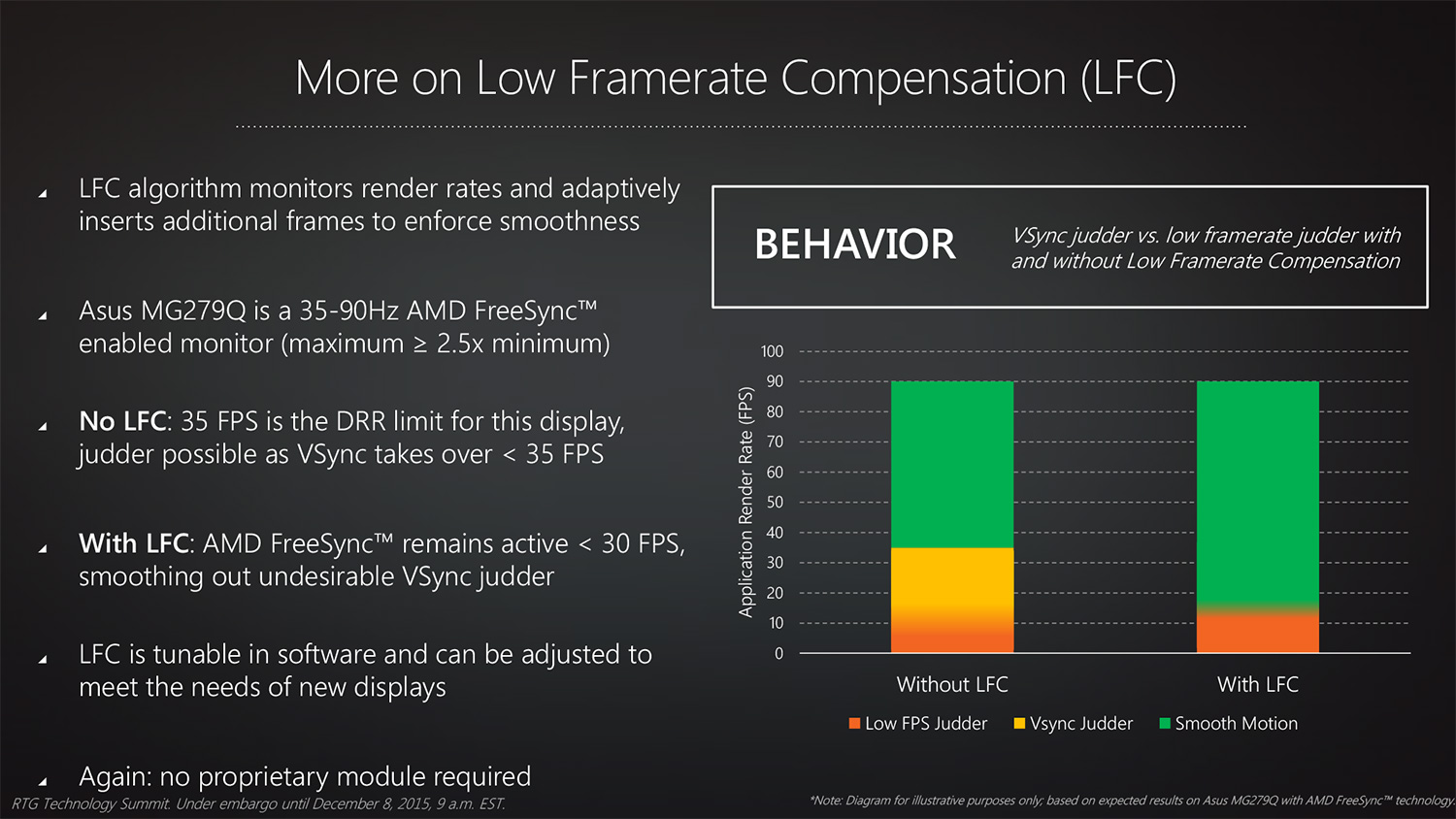 LFC is solid, works mostly as advertised and is a needed addition to the FreeSync software suite that honestly, AMD should have thought about prior to release. Regardless, it’s here now, as a free software upgrade for users of compatible monitors, and gaming is better because of it. 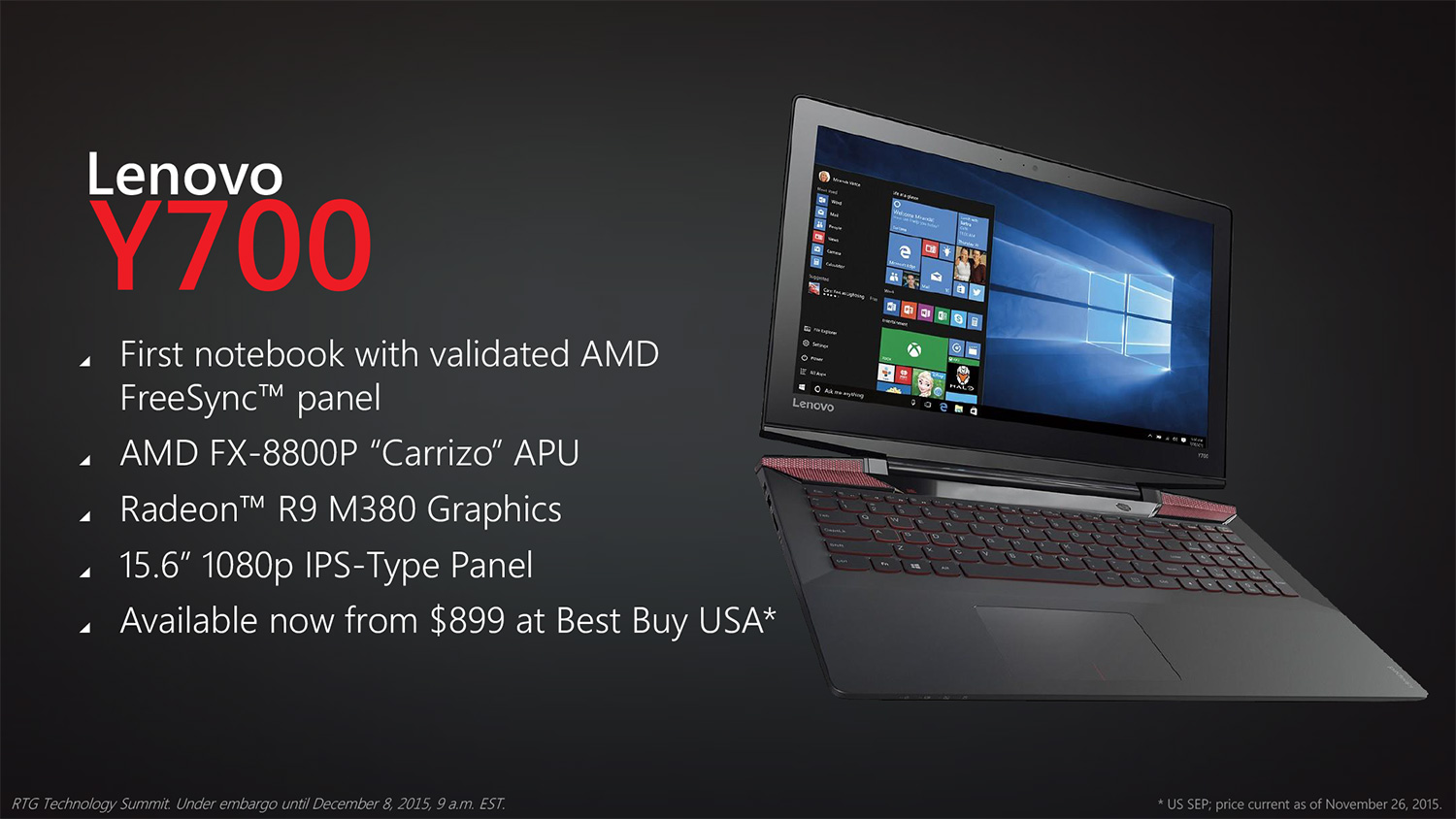 AMD also wanted to point out that FreeSync is also available this holiday in a notebook! The Lenovo Y700 that includes the AMD FX-8800P Carrizo APU and the discrete Radeon R9 M380 GPU has VRR support on its 15.6-in 1080p IPS panel. I asked what ranges the monitor supported FreeSync at but no one seemed to have a solid answer for me yet. I’ll try to get hands on with the hardware at our local Best Buy to find out. Either way, it’s great to see AMD make a move in this market though with very minimal market share in discrete notebook graphics, it may be hard to find. 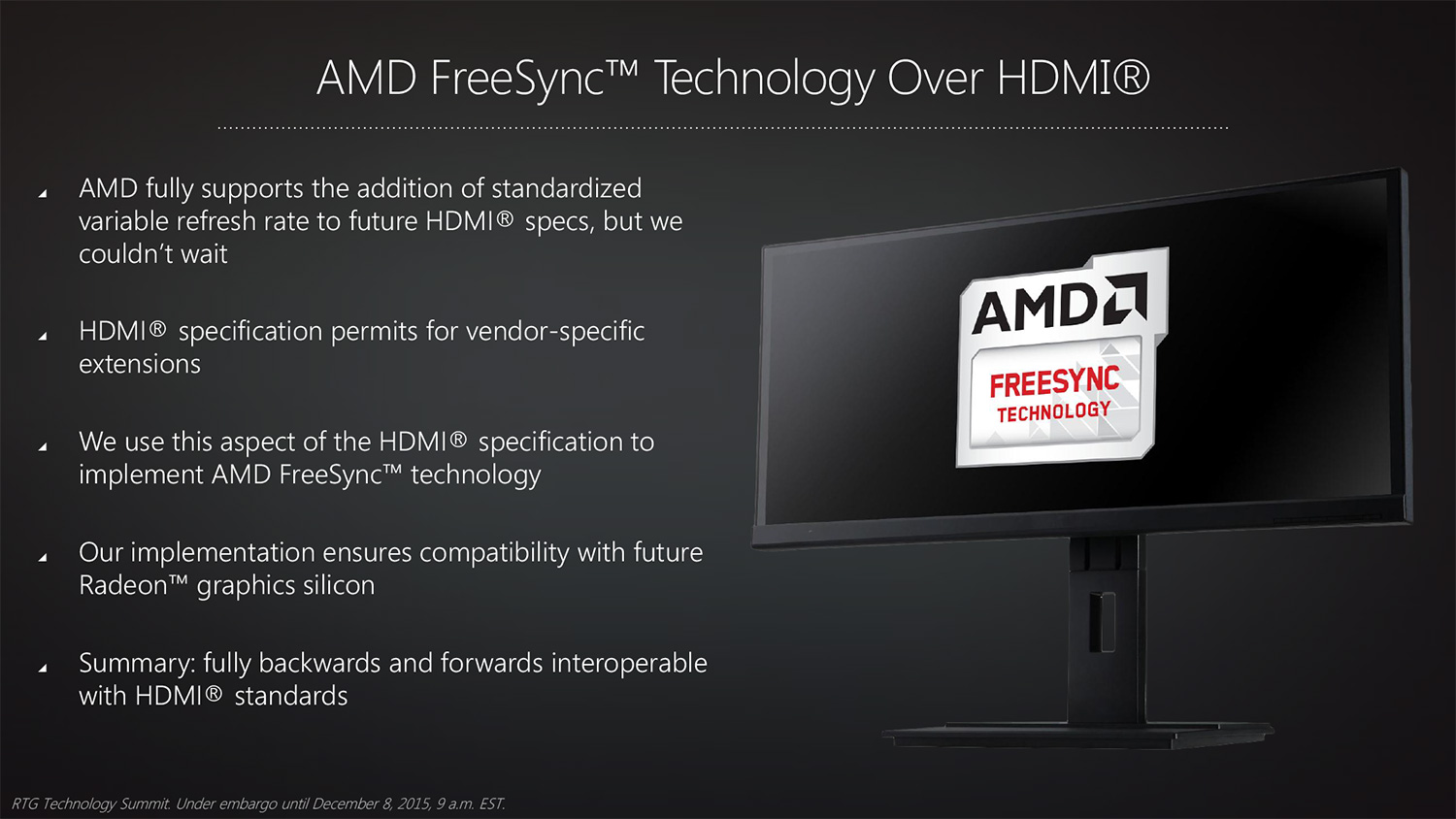 A new feature coming in 2016 is support for FreeSync over HDMI. Using vendor-specific extensions of the HDMI specification, AMD has worked with scalar vendors to develop such an extension that will add support for variable refresh to the protocol, something that does not exist today. This method allows HDMI FreeSync to be forwards and backwards compatible with shipping FreeSync-ready graphics cards though you will need a new display controller (and monitor) to support it.

As an interesting aside, when AMD was asked if they would open up this HDMI extension to the ecosystem for others to integrate, often claimed to be the company’s primary direction, they said they hadn’t yet made that determination as they had done the development work. The irony in that statement is ripe if you have followed the NVIDIA G-Sync versus AMD FreeSync debate. 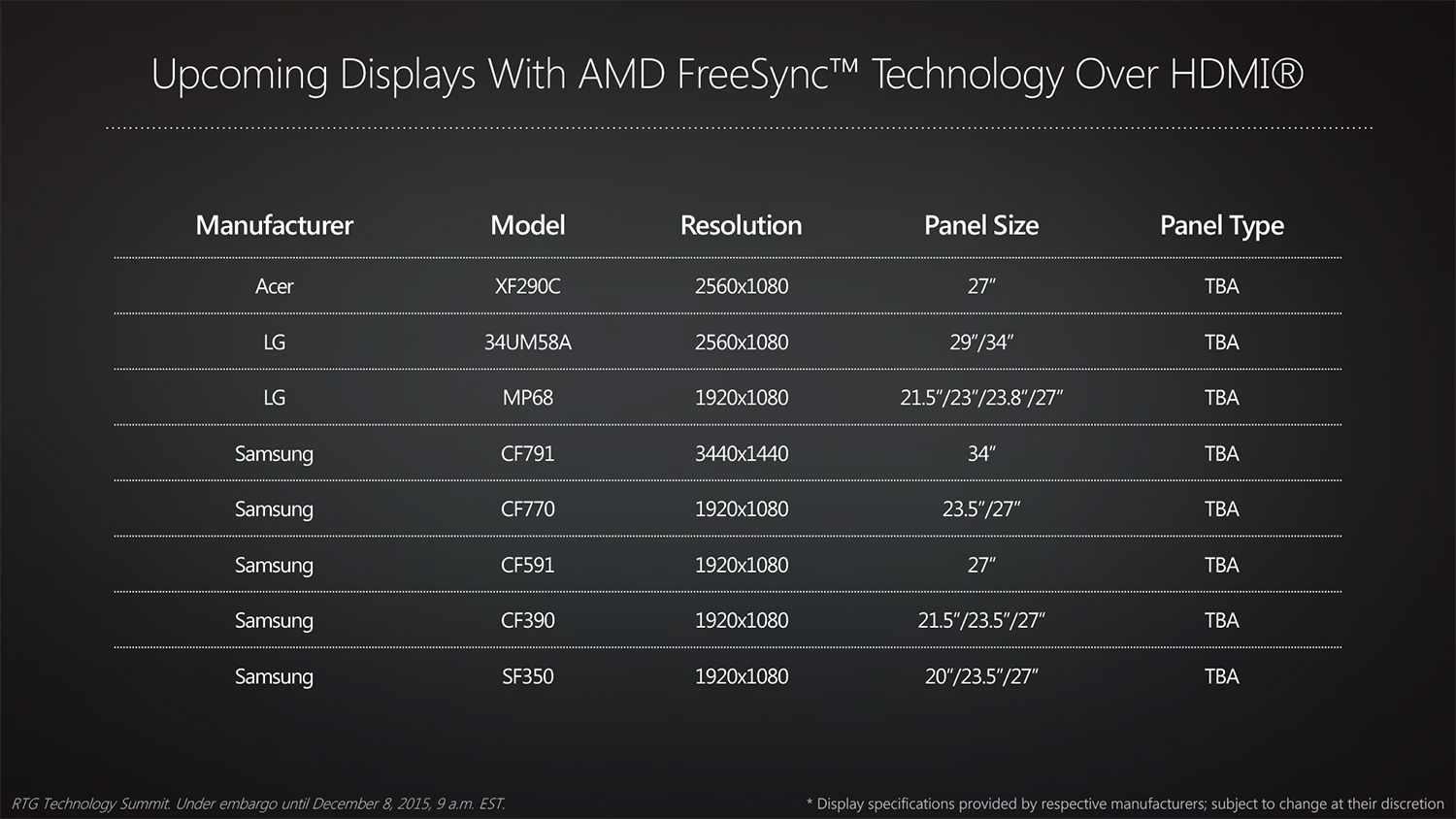 AMD already has a list of 9 upcoming displays that will support FreeSync over HDMI, adding to the lead over design wins for the technology when compared to G-Sync.

An obvious question to FreeSync over HDMI is….why? With DisplayPort a free connection option (HDMI has a licensing fee), what is the benefit to having FreeSync on HDMI and then even on NEW upcoming monitors? AMD claims that monitors vendors aiming for lost cost solutions still lean towards a single HDMI connection and tend to leave DisplayPort off the feature list. Though this doesn’t make sense to me in this modern age, and makes even less sense in 2016, we have definitely seen the sub-$200 monitor market with a distinct lack of DisplayPort connections. If that continues, and FreeSync improves on its advantage in pricing against G-Sync, it could be a solid win for Radeon users. 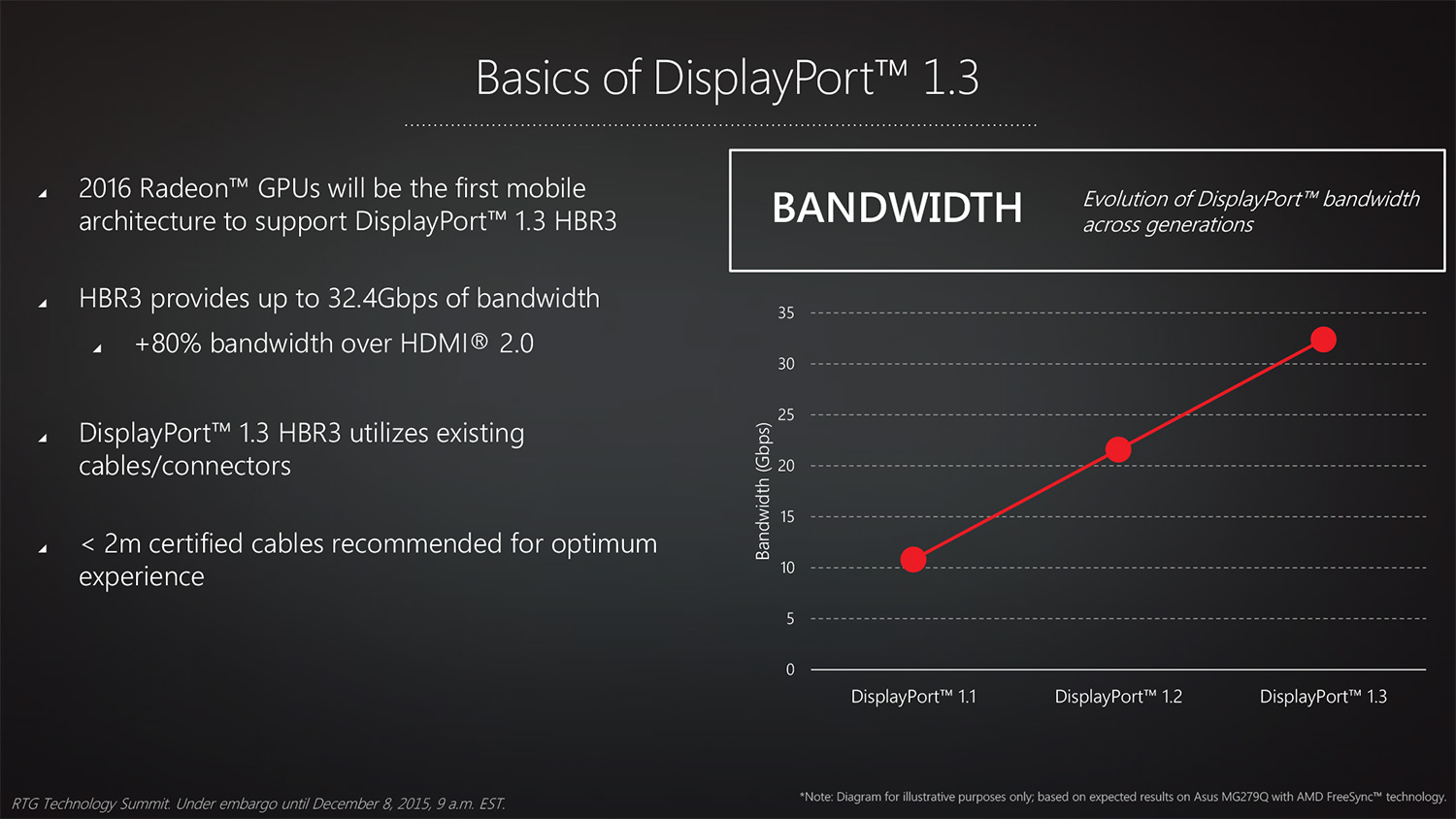 Finally, to round things out, AMD touted the pending advantages of DisplayPort 1.3 for new resolutions and new FreeSync configurations. The HBR iteration of DisplayPort offers an 80% bandwidth improvement over HDMI 2.0, up to 32.4 Gbps. It uses existing cables and connections and offers new display options that will get some of our reader’s attention. 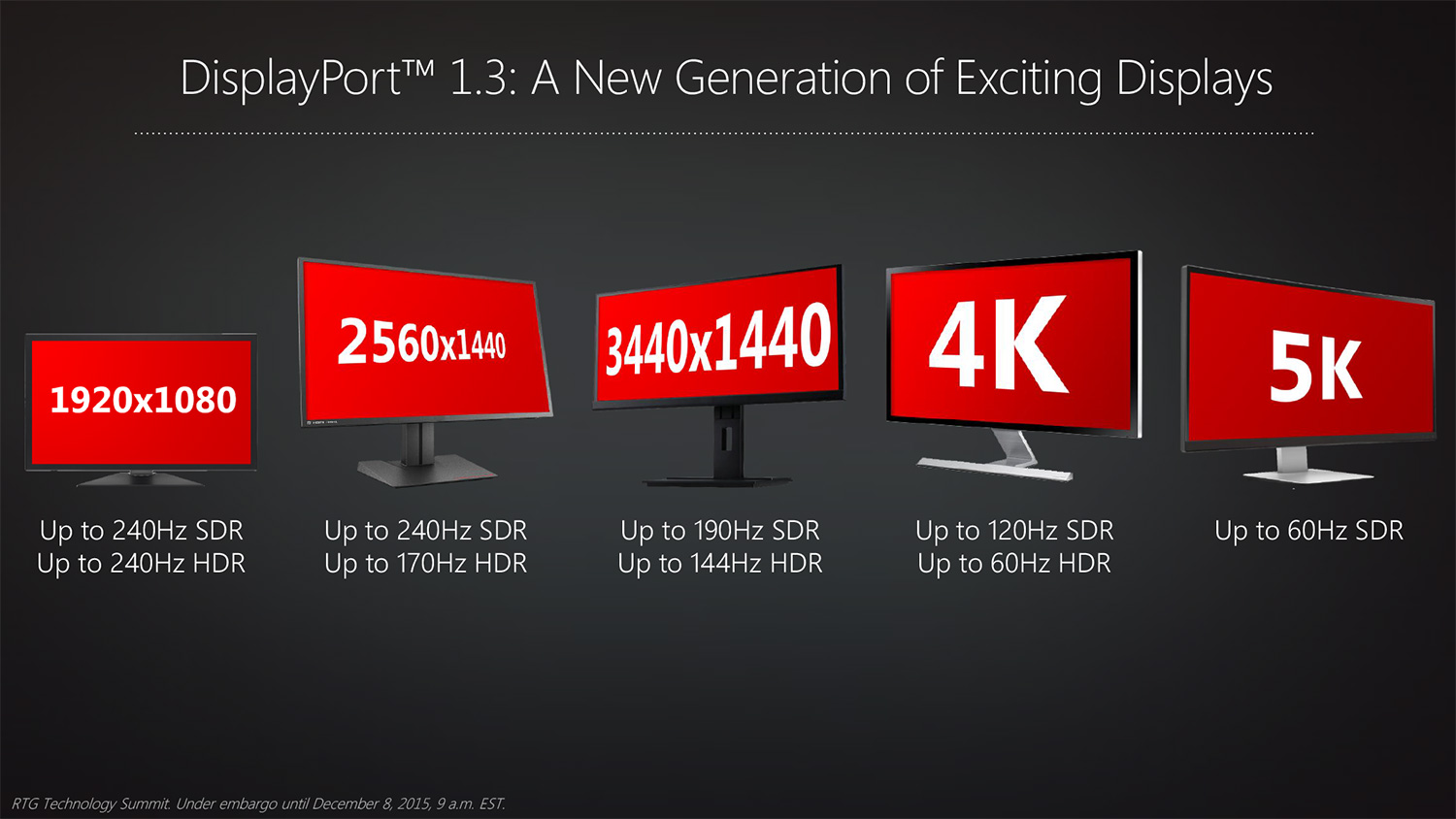 And even if you don’t think you need all that bandwidth for your usage scenario, the upgrade to HDR panels will eat up a lot of that bandwidth. For example, DisplayPort 1.3 will support 3440×1440 resolution 21:9 screens at up to 190Hz in SDR mode or 144Hz in HDR.

This is just the beginning for Radeon as we approach 2016. The Radeon Technologies Group has plans laid out for the next couple of years, though implementing them correctly to build back market share and consumer mind share is a different matter altogether. What I can tell you from personal experience and my interactions with the team at RTG last week, everyone believes they can do amazing things. And for me, with Raja Koduri at the helm, I am tempted to believe them.

USB Gamepad and 8800GTX, quite a bundle