Benchmarks here are going to be more limited than you might be used to seeing on PC Perspective, but that’s not because we are devaluing performance. Instead, I am pushing forward with a more experience-based evaluation method for devices like smartphones, tablets and mainstream notebooks. (Gaming notebooks are a totally different beast.) We’ll still have a handful of system level, processor tests, to make sure that performance is scaling appropriately with the new Skylake architecture. We will also have a few gaming benchmarks on the Surface Book with the inclusion of its discrete NVIDIA GeForce GPU. 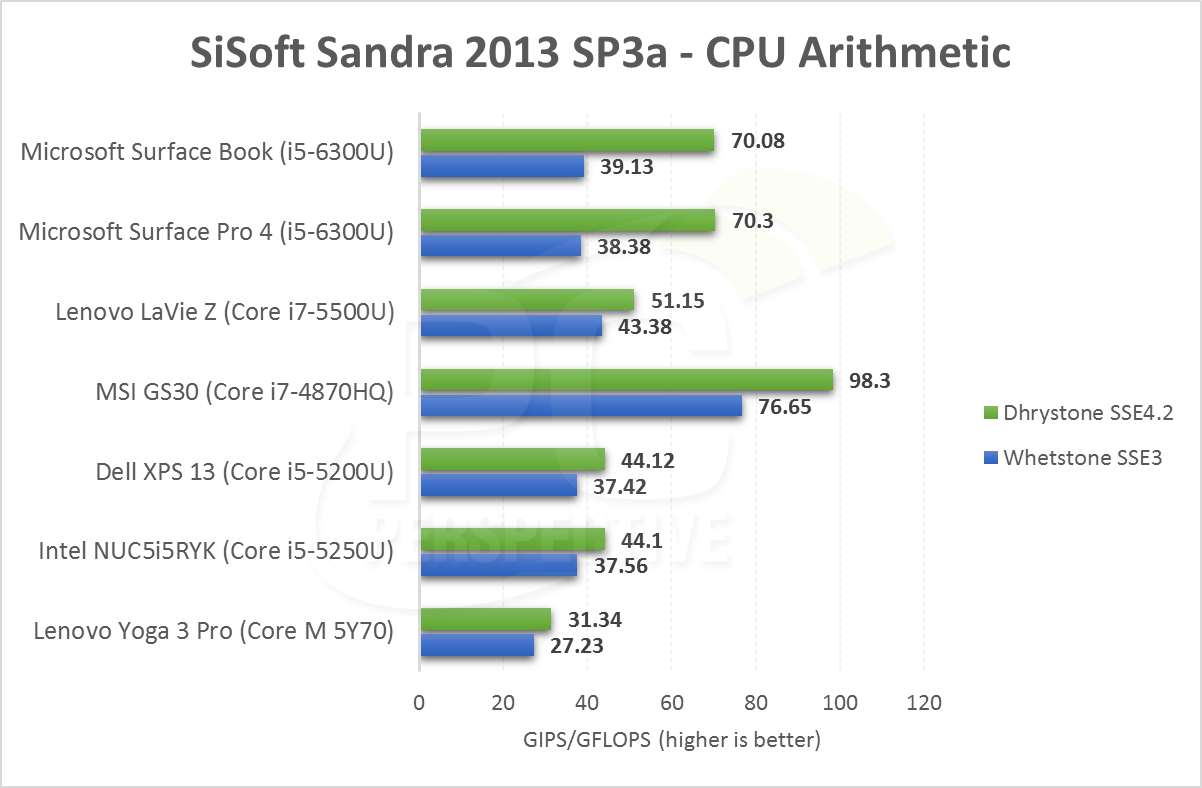 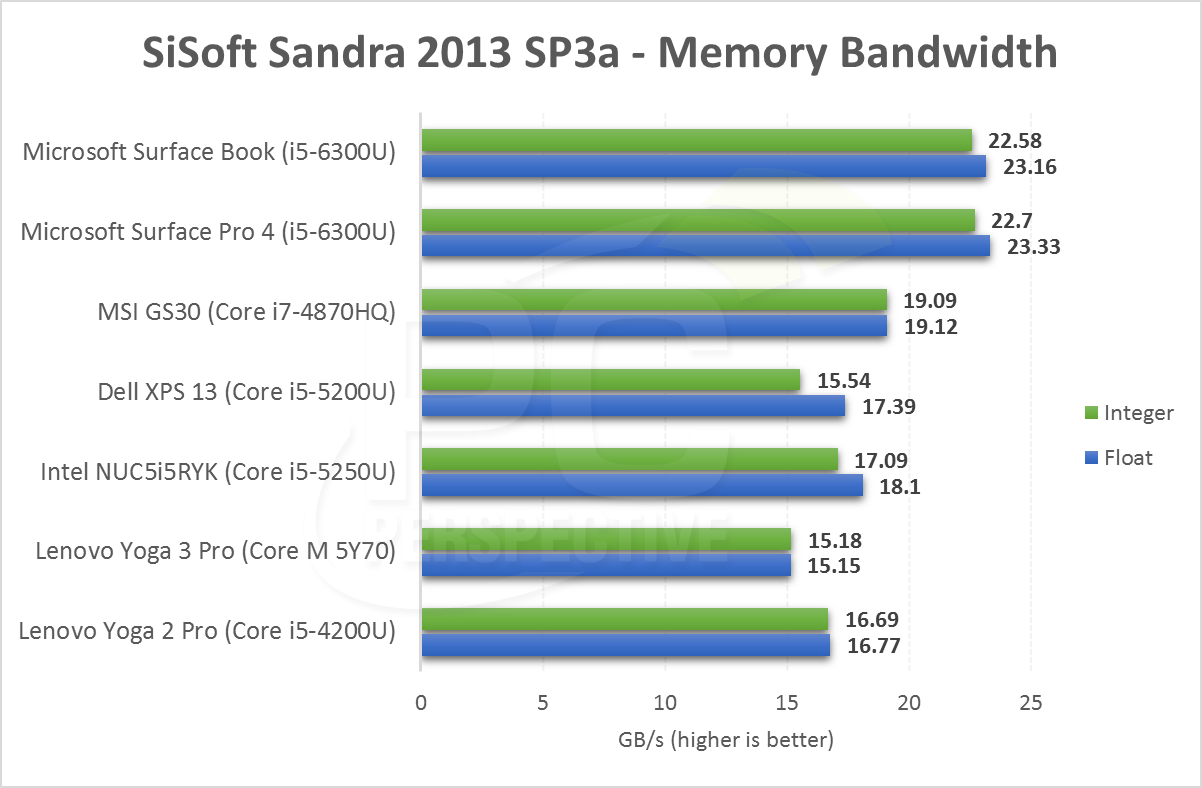 First up we have the ever-present SiSoft Sandra suite of tests to help give us a view of synthetic and optimal performance. It also allows us to compare the Surface devices with previous generation Broadwell and Haswell hardware.

The first thing to notice is that, because of our nearly identical configuration between the Surface Book and Surface Pro 4, the scores between the two devices are the same. Totally expected there. The Core i5-6300U compares favorably with the Core i5-5200U found in the Dell XPS 13 and even against the Core i7-5500U (both Broadwell processors) found in Lenovo LaVie Z. Processor throughput and capability isn’t lacking here even with the dual-core / HyperThreaded configurations that Microsoft is using in all models. The step up to the Core i7 will buy you a handful of percentage points additional at peak, but the cost difference doesn’t usually warrant the upgrade in my view. 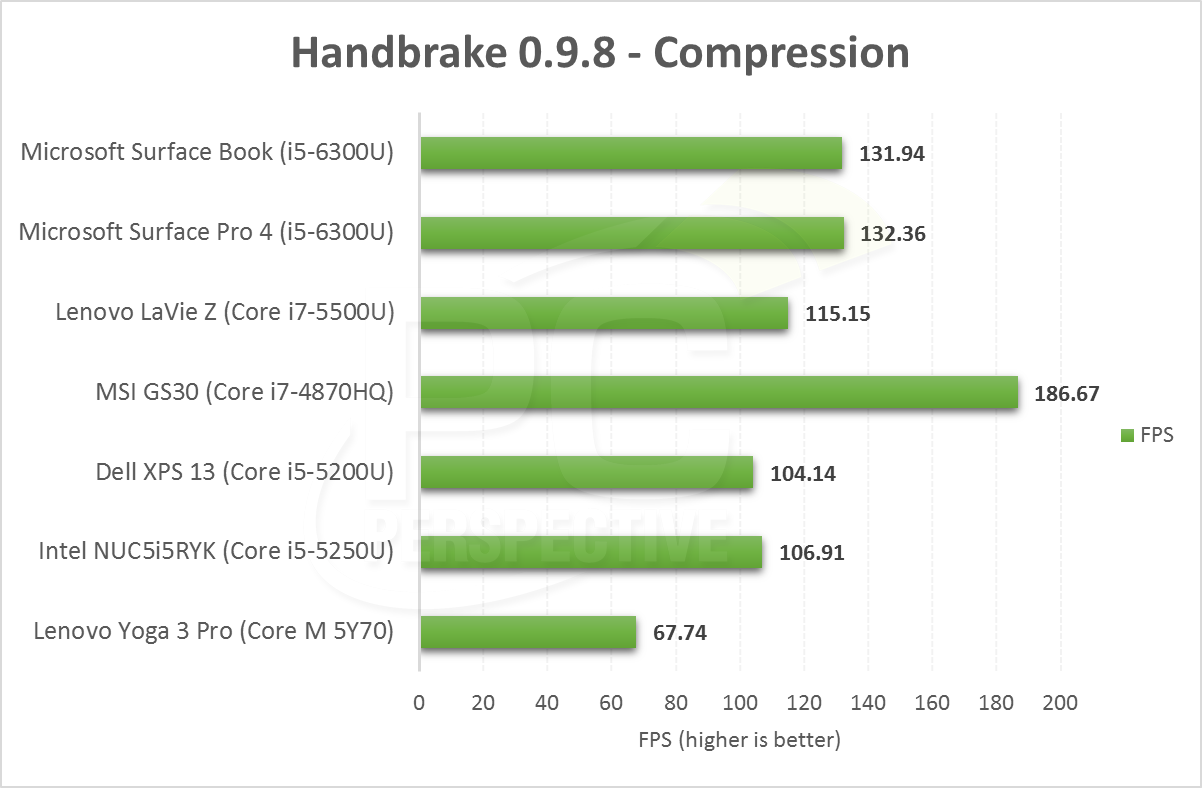 Handbrake is another CPU performance test that measures long-term performance of a processor by encoding video. While many users will never utilize a notebook for such a task, anyone considering making the Surface devices their only computer will be very interested in how it can handle these tasks.

With an average encoding rate of just over 132 FPS for both the Surface Book and Surface Pro 4, Microsoft’s new flagship hardware is 26% faster than the Dell XPS 13 and even 15% faster than the LaVie Z and its Core i7 Broadwell 5th generation processor. 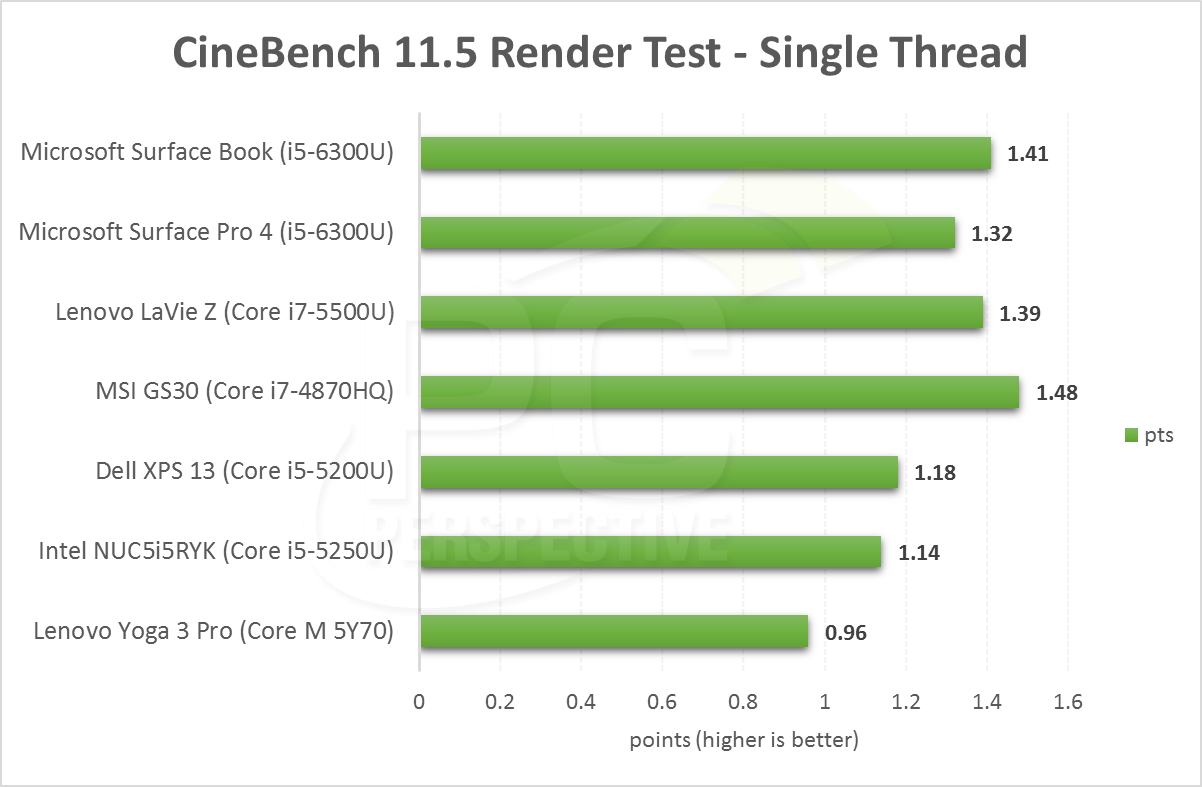 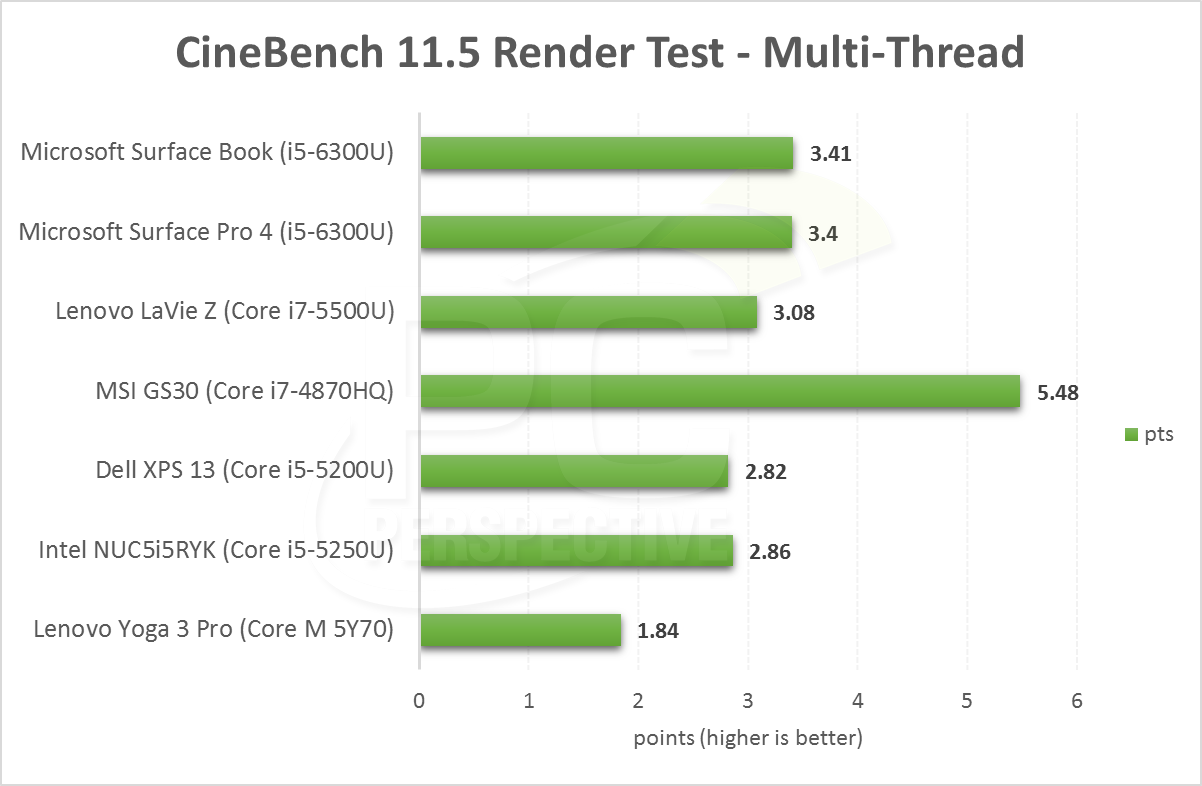 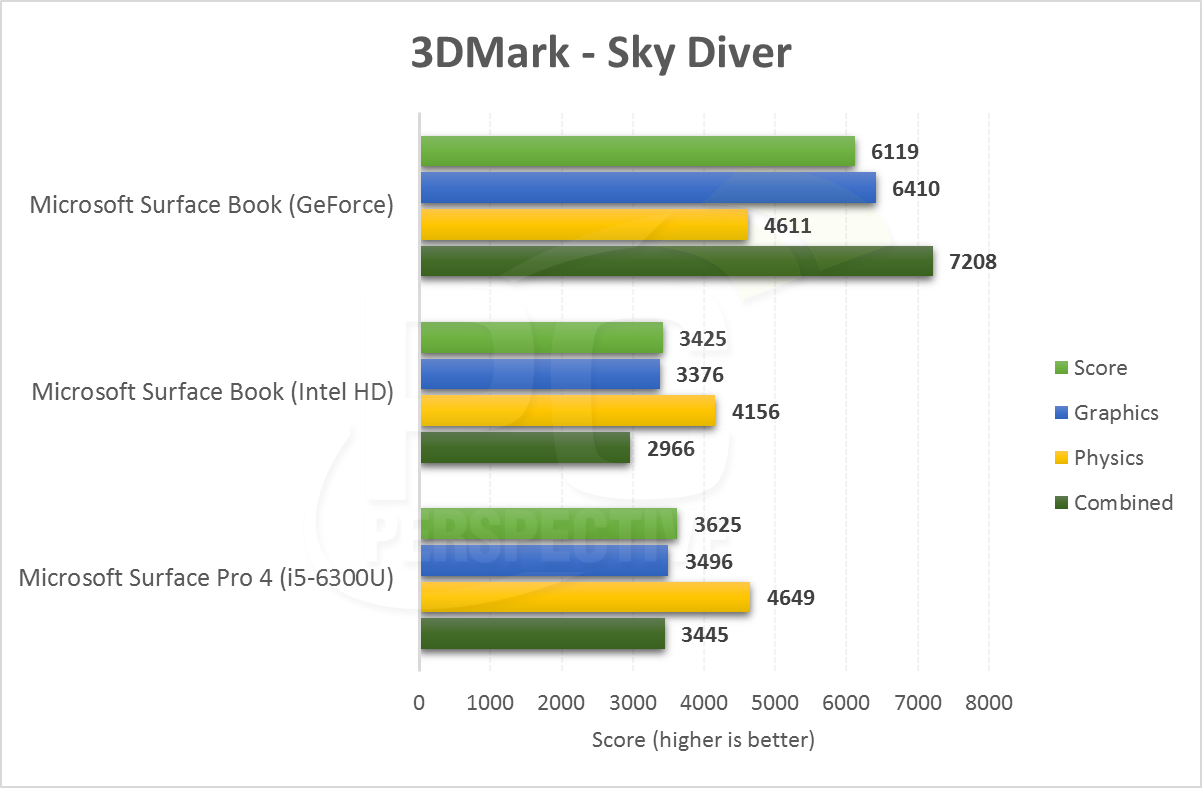 Our basic graphics testing will compare the Surface Pro 4 and Surface Book, although the Book is tested both with and without the discrete NVIDIA GeForce GTX GPU. This was done by running tests without the keyboard dock attached the tablet.

Using the new 3DMark Sky Diver test, more closely matching the workloads that machine with the gaming capability of the Surface devices can tackle, we see a couple of interesting results. First, the score on both tablets with integrated Intel HD Graphics 520, are close but not identical. In general, the SP4 had a better score, slightly but consistently. That might be due to slightly better cooling (and a thicker design) allow for higher clock speeds for a longer time period. The gap is ~5% so it’s nothing to get overly concerned about.

But when we compare the Surface Book with and without the discrete GPU we see a 75% increase in performance, jumping to Sky Diver score of 6119. That is certainly not a desktop-class GPU result, but the advantages for gaming and compute workloads are going to be substantial.

One thing to keep in mind is that, because the discrete GPU on the Surface Book only has 1GB of memory, playing at high resolutions (or with really high image quality settings) isn’t going to be possible – although it will be better than what the Intel HD 520 would allow. In fact, in our testing with 3DMark Fire Strike, the scores between the integrated and discrete graphics solutions were very close. This indicates that a bottleneck of the memory system (think swapping) was dominating the pipeline, not allowing the obviously faster NVIDIA GPU to showcase its advantage.