Gaming on the Surface Book and Surface Pro 4

When I first posted our video preview of the Surface Book and Surface Pro 4, many of our readers requested information on the gaming capability of the devices, the discrete GPU enabled Book in particular. I’m sure the 3DMark result above gives you some context, but we played a few PC games as well to gather some data and talk about experiences.

But first, a couple of notes. The resolutions on these screens are different than just about any notebook you’ve likely used before. First, they are high DPI screens – the Surface Book sports a 3000×2000 resolution and the Surface Pro 4 has a 2736×1824 resolution. Neither the integrated Intel HD 520 nor the unnamed NVIDIA GeForce GTX GPU are capable of rendering to that level. Instead, you’ll have to set your game to a much lower resolution and then let it scale up to your native display resolution. I didn’t really have an issue with that process in the games I played, and that is pretty common with new high-DPI hardware. 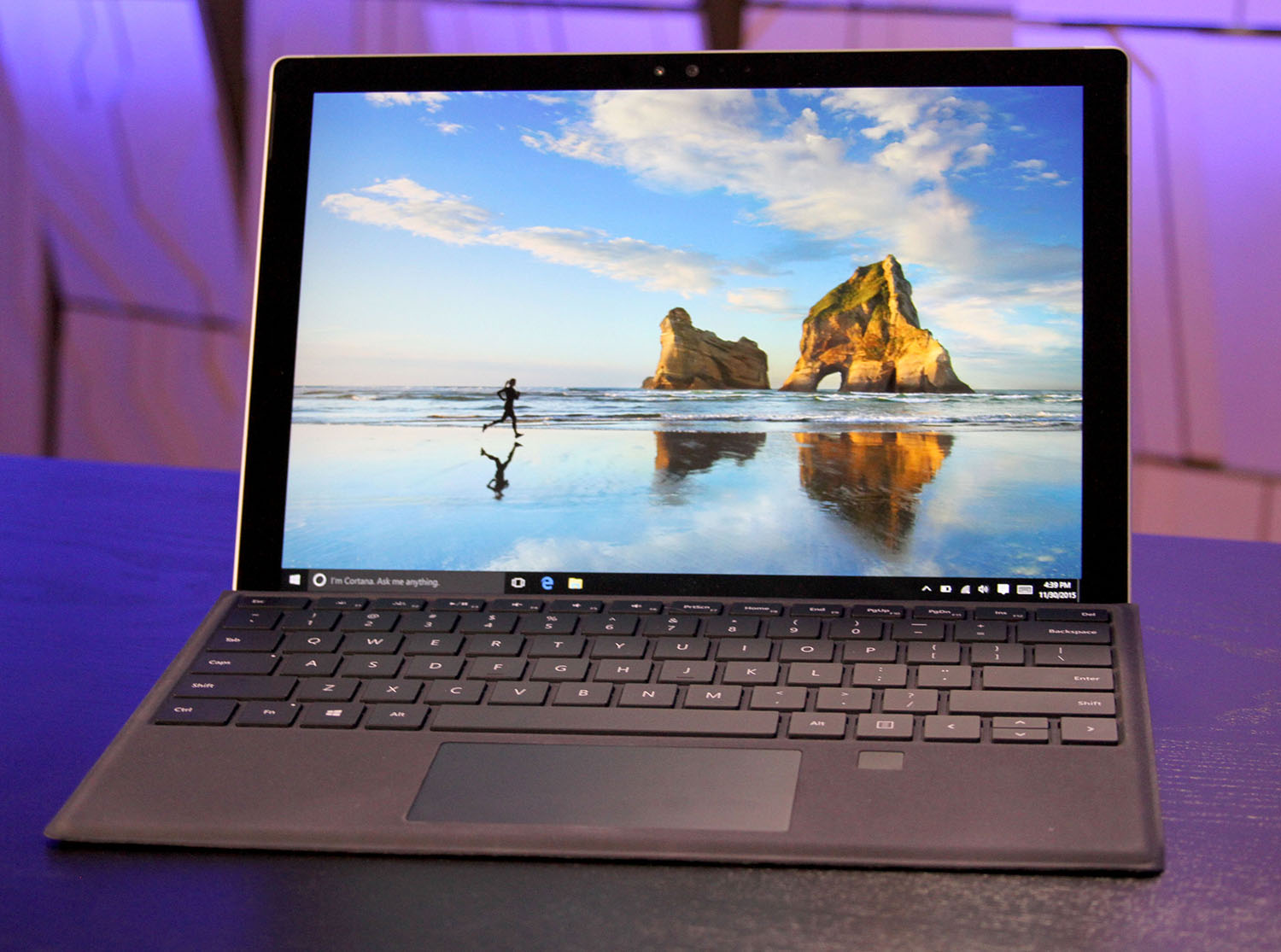 The aspect ratio is a concern as well; many games have no way of dealing with a 3:2 screen resolution and will only let you select a 16:9 or 16:10 option. This means that you are either going to have stretched pixels in one direction (bad) or black bars of unused screen real estate (less bad). Intel told me that there are some games that just don’t know what to do at all and might not run unless you go into Windows and change the desktop resolution to a known resolution. In my testing, Rocket League was one such game – though I was able to get it to work by setting a resolution like 1440×900.

It should also be noted that, at least as of now, the Surface Book does not get to use the latest NVIDIA GeForce drivers – trying to install them from GeForce.com results in a lot of error messages. It’s clear that NVIDIA, Intel and Microsoft have a significant amount of custom engineering in the combination of integrated and discrete GPU in the keyboard dock, and they weren’t comfortable allowing frequent, user-upgraded device drivers. You also can’t access the NVIDIA Control Panel, though it seems that GeForce Experience will work. I do worry about a lack of driver updates for newer games on the Surface Book with GeForce GPU as a low power GPU, like the one found in this system, is even more sensitive to a lack of optimization than a desktop part would be.

UPDATE (12/28/15): NVIDIA just released a new version of the GeForce driver, version 361.43, and it includes support for the Microsoft Surface Book. This is awesome news for users of the device as you are going to get at least some support for driver updates from both NVIDIA and Microsoft. 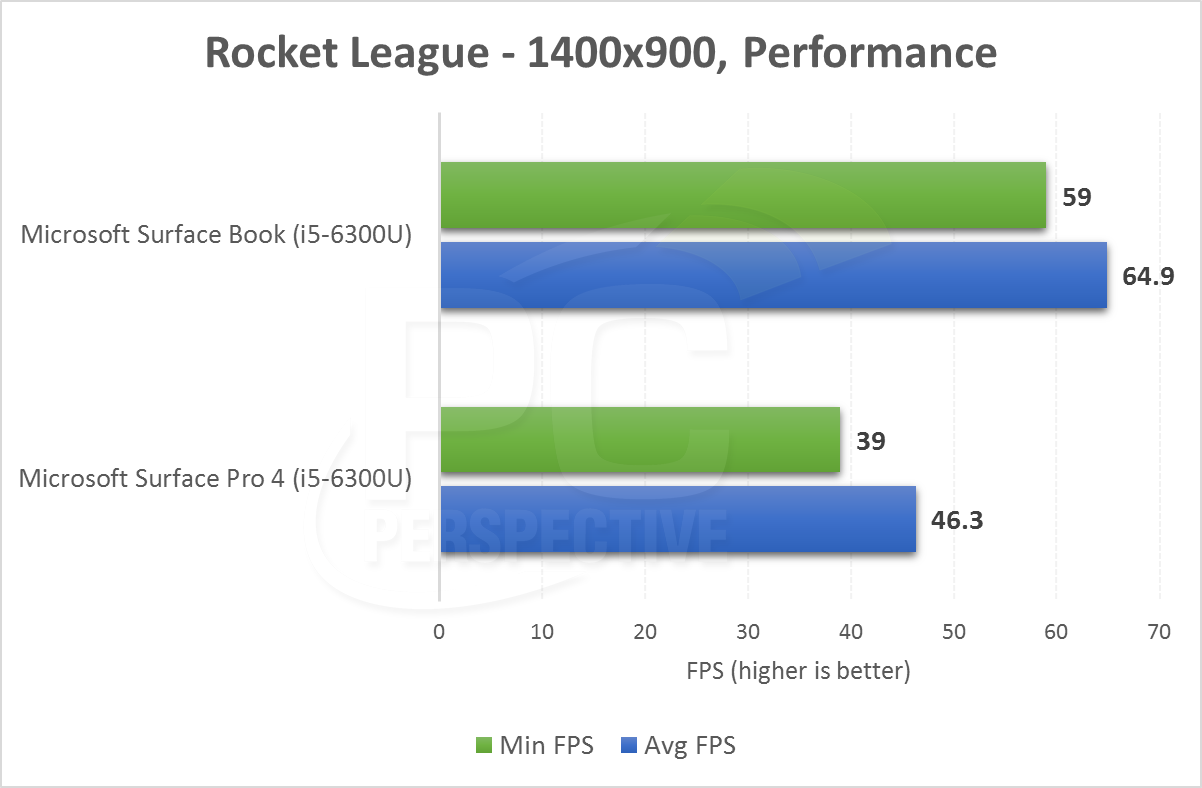 In Rocket League, with a resolution of 1440×900 and Performance level image quality settings, I was able to run the game very well on the Surface Book, over 64 FPS on average. That was 40% faster than the integrated graphics could get to on the Surface Pro 4 (and Surface Book without the GPU). 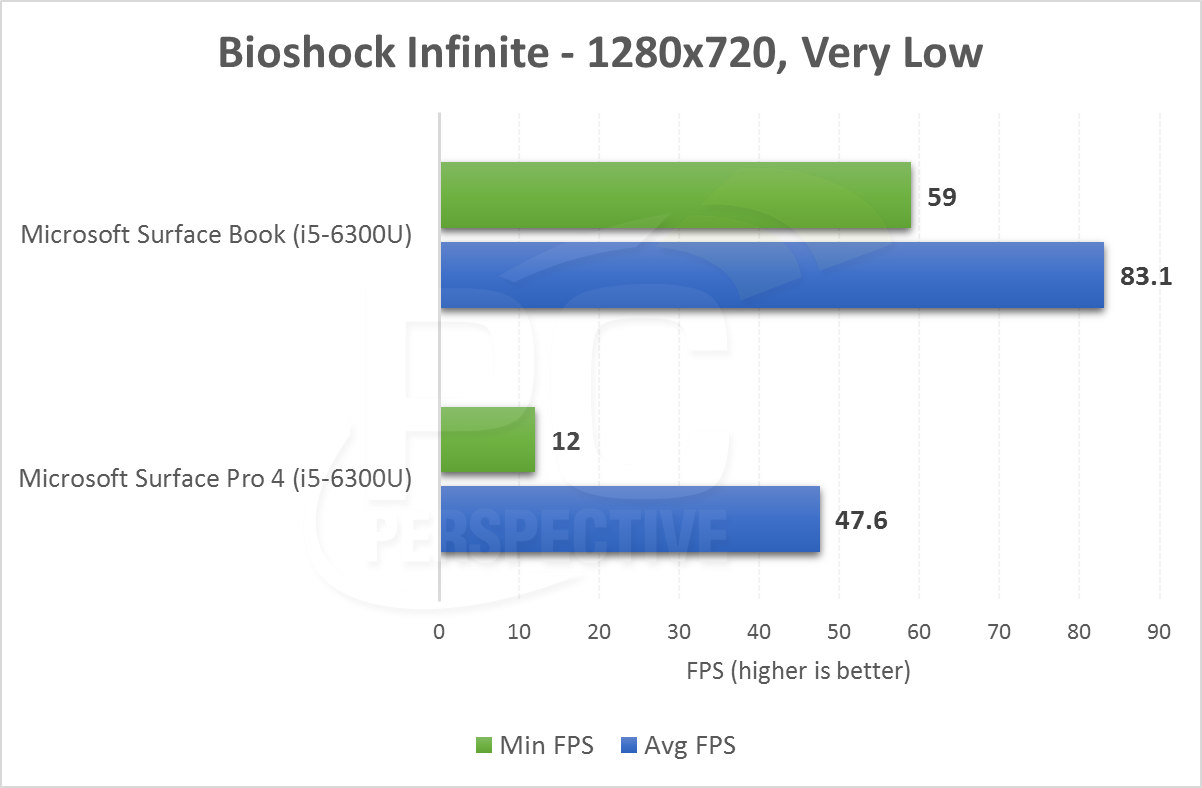 Next up was Bioshock Infinite, running at 1280×720 and the Very Low quality preset. Here the Surface Book with the discrete NVIDIA GPU was 62% faster than the result on the integrated graphics. Both of these frame rates are well above 60 FPS, and you could definitely increase resolution or image quality settings on the GeForce configuration quite a bit and still maintain very smooth and playable experiences. 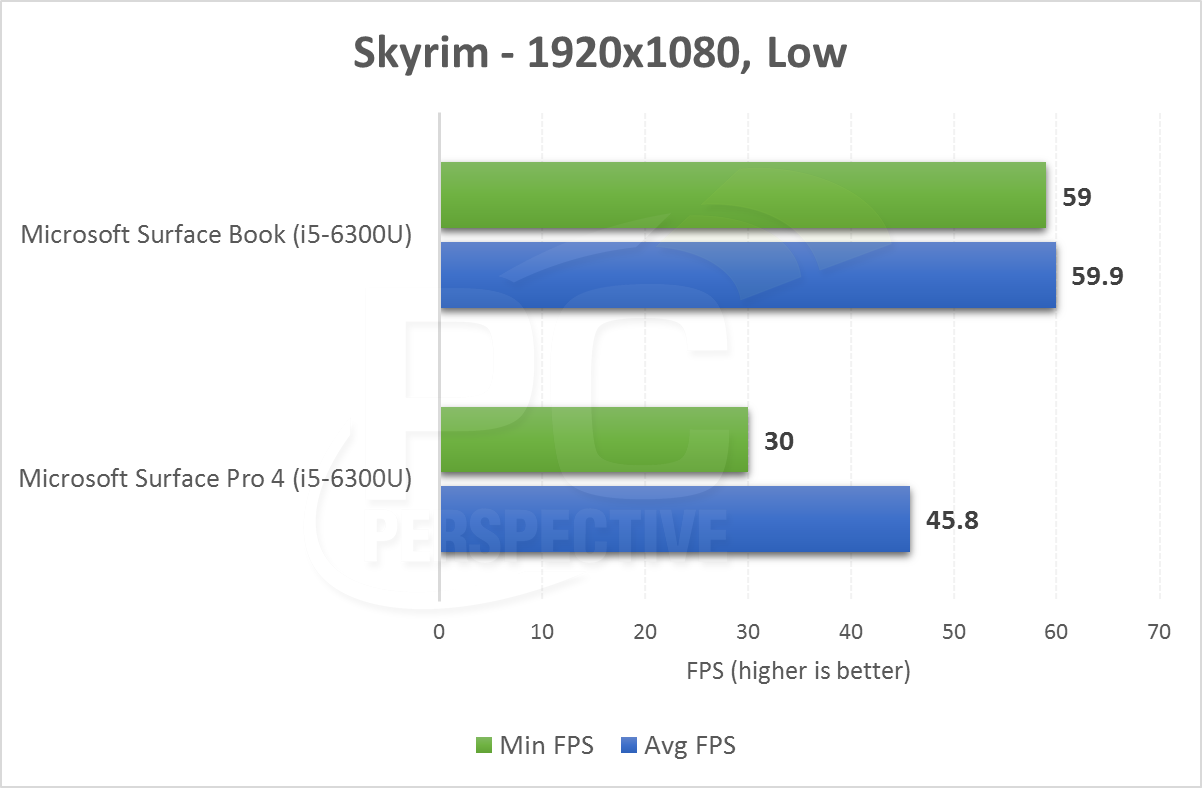 When running on the Surface Book, I was able to play Skyrim at 1080p and Medium/Low image quality settings while sitting at the static 60 FPS lock. Oddly enough, we weren’t able to get the VSync disabled setting to work with the Surface devices – with no access to the full NVIDIA Control Panel, or to reasonable Intel GPU settings, you have much less flexibility to customize gameplay.

Overall I was pretty impressed with the gaming capability of the Surface Book with the discrete GPU for mainstream games. It’s definitely not a perfect experience and PC gamers will find the lack of driver support, access to the control panel removed and the inability to change some settings more than a little annoying, but if you just need to get your Rocket League fix on the go, it will get the job done better than most Skylake non-gaming laptops.