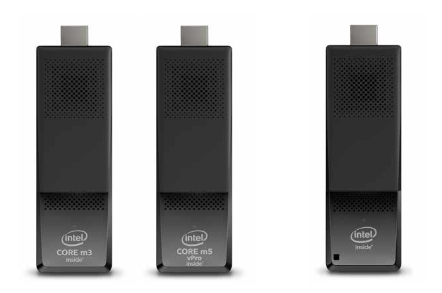 Intel has announced two new Compute Sticks with a handful of available SKUs.

On the high end, in terms of Compute Sticks at least, two products are available. At the low end of the two, a Core m3 processor will be present, and Windows 10 will be pre-installed for $399. The high-end variant will have a faster Core m5 processor, but no pre-installed OS for $499. It seems odd that a choice in SoC will be tied to the OS, but I'm guessing the Intel doesn't want to have too many SKUs for a potentially low-volume product.

Regardless of the above choice, both Core M-level Compute Sticks, above, have 4GB of RAM, 64GB of eMMC storage, HDMI, and 3x USB ports. They also have Wireless AC and Bluetooth 4.1 for wireless connectivity.

Beyond the above two products, a low end, Intel Atom-based Compute Stick is available. Just one SKU will be available, though. It has the same Intel Atom x5-Z8300 that was present on the Zotac PC Stick. It also has 2GB of RAM, 32GB of eMMC storage, HDMI, and 2x USB ports. It has Wireless AC, but Bluetooth 4.0 (instead of the Core M version's 4.1). It will be available for $159.

Release dates are not announced, but the Atom-based Compute Sticks are in production, and the Core M-based one will enter production next month.

Verbatim’s second shot at the DVR