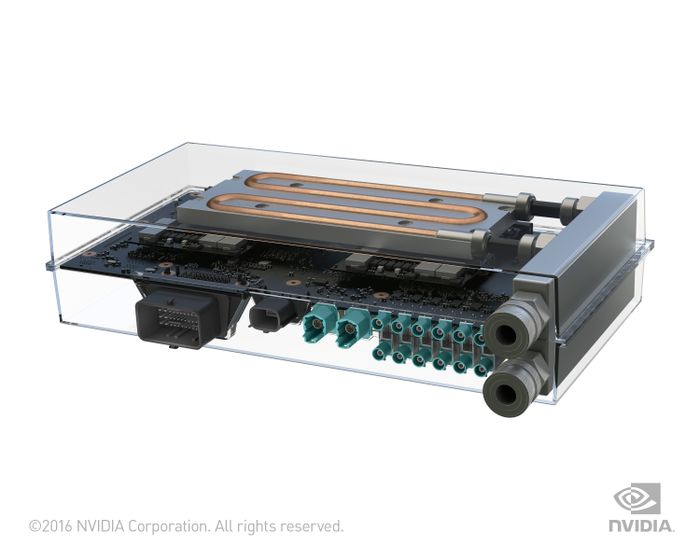 NVIDIA is using the Consumer Electronics Show to launch the Drive PX 2 which is the latest bit of hardware aimed at autonomous vehicles. Several NVIDIA products combine to create the company's self-driving "end to end solution" including DIGITS, DriveWorks, and the Drive PX 2 hardware to train, optimize, and run the neural network software that will allegedly be the brains of future self-driving cars (or so NVIDIA hopes).

The Drive PX 2 hardware is the successor to the Tegra-powered Drive PX released last year. The Drive PX 2 represents a major computational power jump with 12 CPU cores and two discrete "Pascal"-based GPUs! NVIDIA has not revealed the full specifications yet, but they have made certain details available. There are two Tegra SoCs along with two GPUs that are liquid cooled. The liquid cooling consists of a large metal block with copper tubing winding through it and then passing into what looks to be external connectors that attach to a completed cooling loop (an exterior radiator, pump, and reservoir).

There are a total of 12 CPU cores including eight ARM Cortex A57 cores and four "Denver" cores. The discrete graphics are based on the 16nm FinFET process and will use the company's upcoming Pascal architecture. The total package will draw a maximum of 250 watts and will offer up to 8 TFLOPS of computational horsepower and 24 trillion "deep learning operations per second." That last number relates to the number of special deep learning instructions the hardware can process per second which, if anything, sounds like an impressive amount of power when it comes to making connections and analyzing data to try to classify it. Drive PX 2 is, according to NVIDIA, 10 times faster than it's predecessor at running these specialized instructions and has nearly 4 times the computational horsepower when it comes to TLOPS.

Similar to the original Drive PX, the driving AI platform can accept and process the inputs of up to 12 video cameras. It can also handle LiDAR, RADAR, and ultrasonic sensors. NVIDIA compared the Drive PX 2 to the TITAN X in its ability to process 2,800 images per second versus the consumer graphics card's 450 AlexNet images which while possibly not the best comparison does make it look promising. 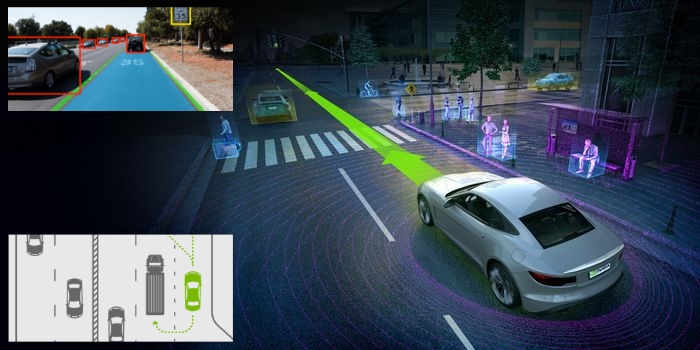 Neural networks and machine learning are at the core of what makes autonomous vehicles possible along with hardware powerful enough to take in a multitude of sensor data and process it fast enough. The software side of things includes the DriveWorks development kit which includes specialized instructions and a neural network that can detect objects based on sensor input(s), identify and classify them, determine the positions of objects relative to the vehicle, and calculate the most efficient path to the destination.

"This complex work is facilitated by NVIDIA DriveWorks™, a suite of software tools, libraries and modules that accelerates development and testing of autonomous vehicles. DriveWorks enables sensor calibration, acquisition of surround data, synchronization, recording and then processing streams of sensor data through a complex pipeline of algorithms running on all of the DRIVE PX 2's specialized and general-purpose processors. Software modules are included for every aspect of the autonomous driving pipeline, from object detection, classification and segmentation to map localization and path planning."

DIGITS is the platform used to train the neural network that is then used by the Drive PX 2 hardware. The software is purportedly improving in both accuracy and training time with NVIDIA achieving a 96% accuracy rating at identifying traffic signs based on the traffic sign database from Ruhr University Bochum after a training session lasting only 4 hours as opposed to training times of days or even weeks.

NVIDIA claims that the initial Drive PX has been picked up by over 50 development teams (automakers, universities, software developers, et al) interested in autonomous vehicles. Early access to development hardware is expected to be towards the middle of the year with general availability of final hardware in Q4 2016.

The new Drive PX 2 is getting a serious hardware boost with the inclusion of two dedicated graphics processors (the Drive PX was based around two Tegra X1 SoCs), and that should allow automakers to really push what's possible in real time and push the self-driving car a bit closer to reality and final (self) drive-able products. I'm excited to see that vision come to fruition and am looking forward to seeing what this improved hardware will enable in the auto industry! 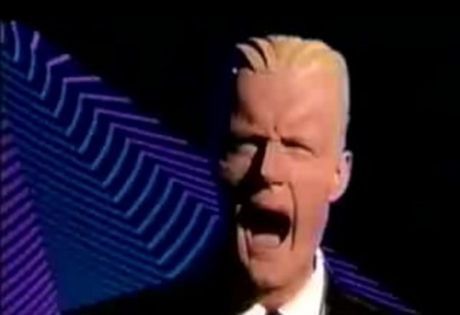 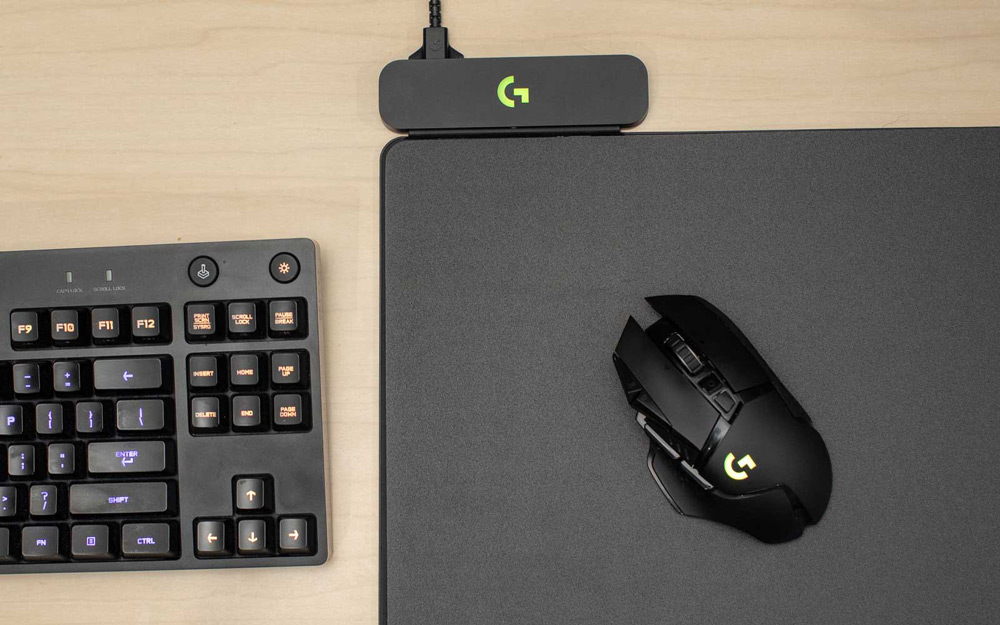