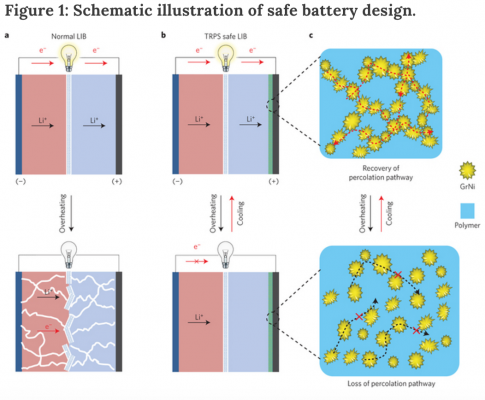 One problem with Lithium Ion batteries is that they have a slight penchant for failing in a spectacular way when charged improperly or if heat builds up past a critical level.  Some researchers have come up with a simple idea to prevent this from happening, applying a polyethylene film to one of the electrodes which changes size as the temperature changes, breaking the circuit when a certain temperature is reached which shuts the battery down.  Once the temperature falls the circuit reconnects and the battery is usable once again.  They do not expect this to impact the normal functionality of the battery, giving an extra level of safety with no performance cost.  You can follow the links from Slashdot to see the research paper yourself.

"Scientists have designed a lithium-ion battery that self-regulates according to temperature, to prevent itself from overheating. Reaching extreme temperatures, the battery is able to shut itself down, only restarting once it has cooled. The researchers designed the battery to shut down and restart itself over a repeated heating and cooling cycle, without compromising performance."