CES 2016 was not a watershed moment for AMD.  They showed off their line of current video cards and, perhaps more importantly, showed off working Polaris silicon, which will be their workhorse for 2016 in the graphics department.  They did not show off Zen, a next generation APU, or any AM4 motherboards.  The CPU and APU world was not presented in a way that was revolutionary.  What they did show off, however, hinted at the things to come to help keep AMD relevant in the desktop space. 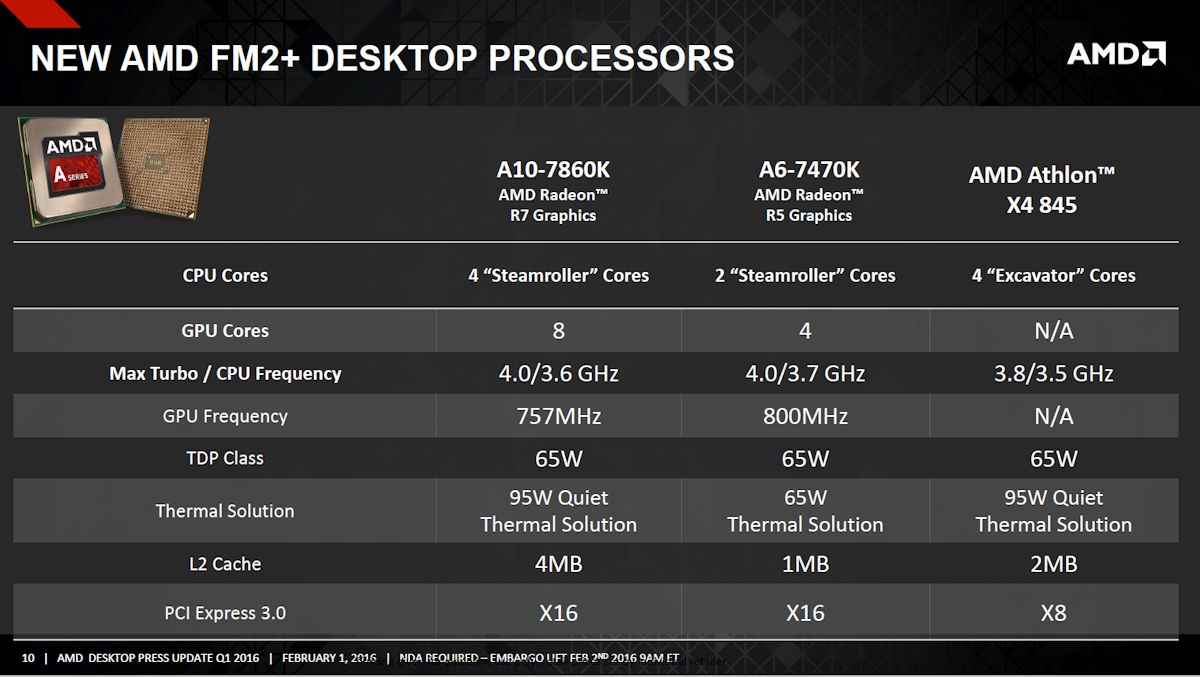 It was odd to see an announcement about the stock cooler that AMD was introducing, but when we learned more about it, the more important it was for AMD’s reputation moving forward.  The Wraith cooler is a new unit to help control the noise and temperatures of the latest AMD CPUs and select APUs.  This is a fairly beefy unit with a large, slow moving fan that produces very little noise.  This is a big change from the variable speed fans on previous coolers that could get rather noisy and leave temperatures that were higher in range than are comfortable.  There has been some derision aimed at AMD for providing “just a cooler” for their top end products, but it is a push that is making them more user and enthusiast friendly without breaking the bank.

Socket AM3+ is not dead yet.  Though we have been commenting on the health of the platform for some time, AMD and its partners work to improve and iterate upon these products to include technologies such as USB 3.1 and M.2 support.  While these chipsets are limited to PCI-E 2.0 speeds, the four lanes available to most M.2 controllers allows these boards to provide enough bandwidth to fully utilize the latest NVMe based M.2 drives available.  We likely will not see a faster refresh on AM3+, but we will see new SKUs utilizing the Wraith cooler as well as a price break for the processors that exist in this socket.

AMD is offering three new processors that will show up in the FM2+ motherboards that are currently in the market.  These are the A10-7860K, the A6-7470K, and the brand new Athlon X4 845.  These are a decent refresh of the line that adds some significant features for a low, low price. 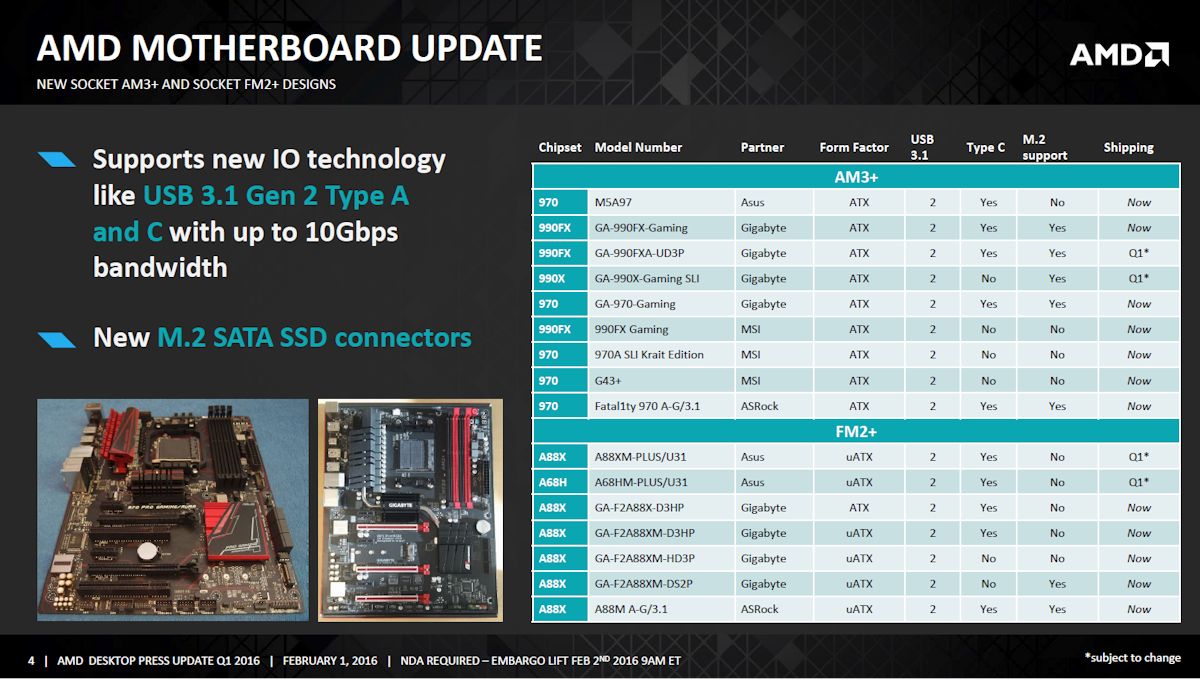 The A10-7860K is a “Godavari” based APU that inherits its design from the previous Kaveri architecture.  This features 4 Steamroller cores (2 modules) as well as the full 8 GPU cores.  Where this differs is the clock speeds and TDPs.  The 7860 goes from 3.6 GHz to 4.0, which is a little odd considering that the previous 7850K goes from 3.7 GHz to 4.0 GHz.  The big change up here is that the graphics clock goes from the 720 MHz of Kaveri up to 757 MHz in the Godavari 7860.  Also, this APU is rated at 65 watts TDP rather than the 95 watts TDP of the Kaveri lineup.  AMD is giving up a little bit in CPU performance for a big gain in graphics and overall TDP.  This is not revolutionary, but it is a small step forward to make AMD more competitive when it comes to TDPs and overall performance.

The A6-7470K is another unlocked APU that features a two core product with competitive clock speeds.  It runs from 3.7 GHz to 4.0 GHz.  The GPU portion is cut down to 4 GCN units as compared to the 8 in the 7860K.  The GPU does run at 800 MHz, which will make up some of that difference.  This chip is a 65 watt part also, but it is also very inexpensive.  The official price has not been released, but it is going to be well under $100 US. 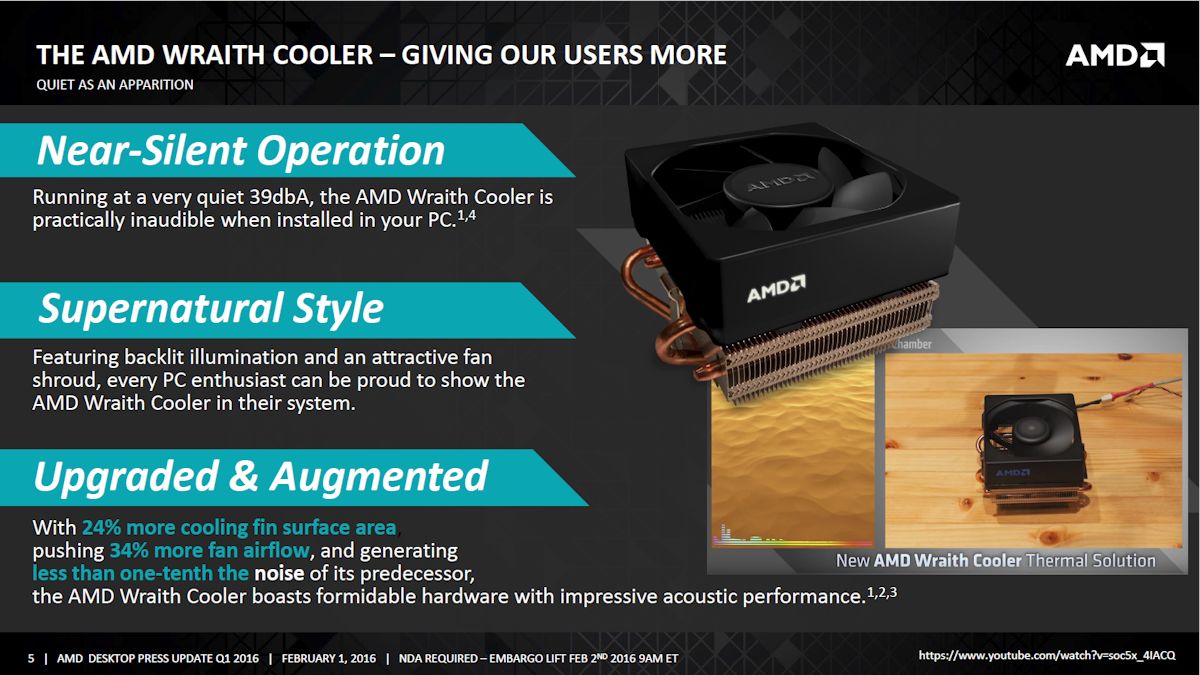 Finally, we have what might be the most interesting part from AMD this round.  Last year, we were introduced to the Carrizo APU, which featured the latest Excavator cores that provided high power efficiency as well as a denser design for smaller die sizes.  These parts were limited to the mobile market and featured TDPs up to 35 watts.  Now, AMD is introducing a part based on Carrizo, but without the GPU portion enabled.  The Athlon X4 845 features 4 Excavator cores (2 modules) with no GPU active.  This is another 65 watt part that runs at 3.5 GHz base and goes up to 3.8 GHz.  There are some limitations here, though.  It only features 2 MB of L2 cache vs. the 4 MB of the 7860K.  It also cut down the amount of PCI-E 3.0 lanes from Kaveri/Godavari parts so that it only supports X8 PCI-E 3.0, rather than the full X16.  This part is lower clocked, but it could make up some performance with the IPC improvements that the Excavator architecture brings.