No one is more excited to see the Snapdragon 820 processor in the Galaxy S7 (in some regions) than Qualcomm and Qualcomm's investors. Missing the S6 design win completely was a big blow to the SD 810 but the move to FinFET technology and a new SoC design have put the SD 820 back in the driver's seat for flagship smartphones it seems. While talking with Qualcomm's Peter Carson, Senior Director of Marketing and Modems, I learned quite a bit about the X12 LTE modem integration with the Galaxy S7 as well. As it turns out, the application processor itself isn't the only thing that has impressed OEMs or that will benefit consumers.

Modem marketers have a problem – quantifying the advantages of one LTE modem over another can be troublesome and complex. It's not as simple as X% faster or X% longer battery life, though those aspects of performance see improvement with better modem technology. And while of course the new announcement of Gigabit LTE is getting all the media attention at Mobile World Congress this week, there is a lot of excitement internally about the shipping implementation of the S7's modem.

The Galaxy S7 encompasses the most advanced Qualcomm TruSignal antenna technology implementation to date, combining several features to add real-world benefits to the cellular performance of the device.

First, the S7 will feature the most advanced version of the antenna tuner including a closed loop feedback cycle that will tweak antenna properties in real time based on sensor data and current signal properties. If the proximity sensor is activated or you are rotating or moving the mobile device, the receiver can adjust antenna properties to improve signal reliability measurably.

The best examples fall on the cell edge, where dropped calls are common and low voice quality are found. You can improve the gain of the antenna, that is adversly affected by simply holding the device, for much better reliability and even data throughput. That means fewer dropped calls and network drops for users that have moderate service reliability. Voice quality will get better as well, as the error rates that cause data loss in low signal areas will be reduced.

But even users that have a good signal can get benefits from the tech – gains of just 2-3 db will allow the modem and receiver to go into a lower power state, reducing 20% of the modem power draw. That won't equate to 20% total system battery life improvement but users that depend on their phones for extended use will see benefits from this integration.

Another TruSignal feature included in this modem implementation is smart transmit antenna switching. The simple explanation here is that the modem can swap which antennas are in receive and transmit modes in order to improve the transmit (upload) performance by as much as 10db! Based on properties of the antenna signal, position of the device and if you are in a heavy upload workload (posting some photos to Facebook, a video to YouTube), TruSignal allows the modem to change in real-time. 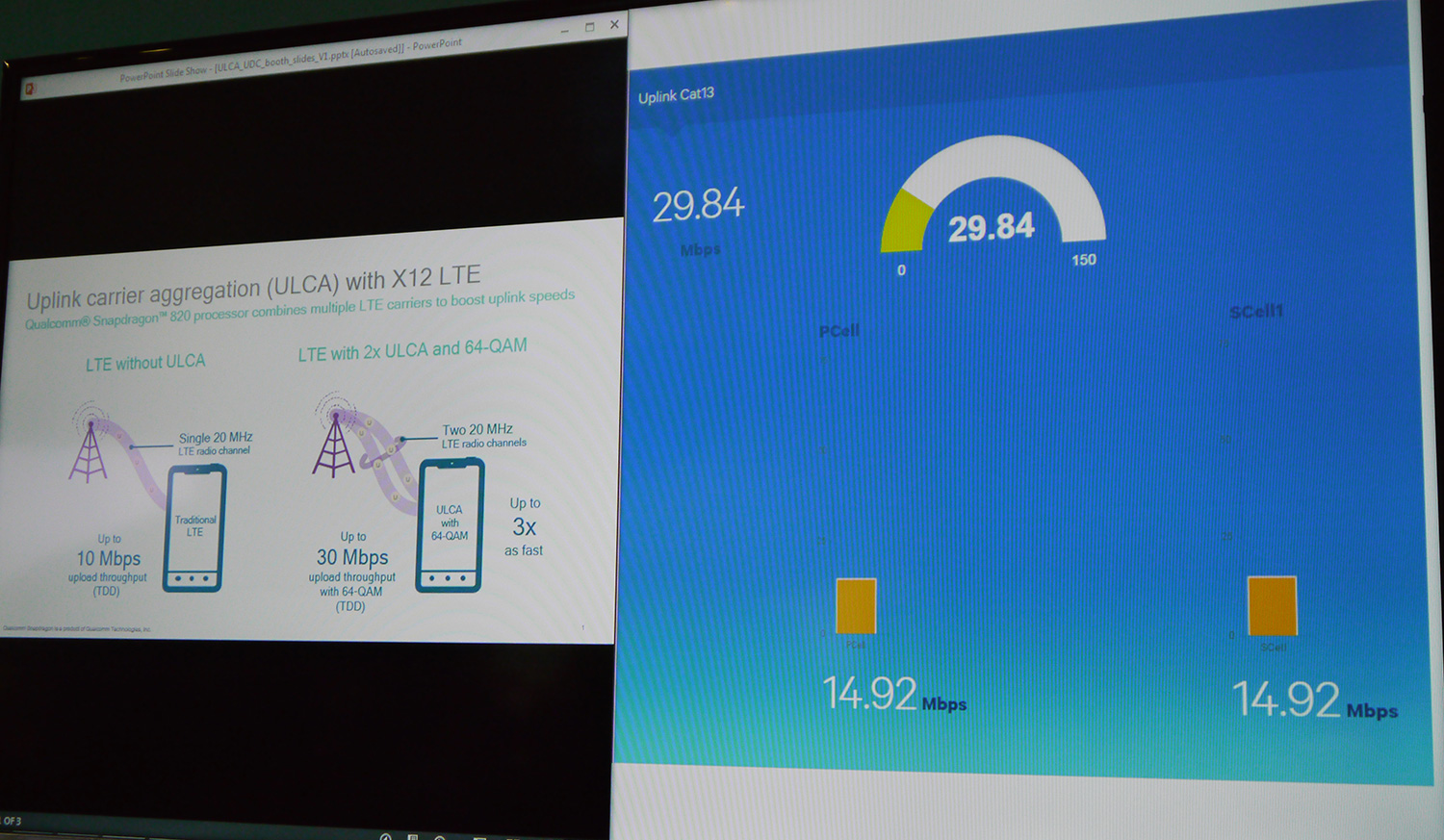 These techniques are additive so Galaxy S7 owners will find that both the antenna tuner and antenna switching are going to move the cellular performance forward, though Qualcomm isn't saying if ALL implementation of Samsung's new flagship smartphone will implement the features. I would guess that we'll see this on the Snapdragon 820 + X12 powered models only, but I haven't learned yet which modem the Exynos-powered versions are using yet. Turns out the versions of the S7 that utilize the Samsung Exynos SoC are using a non-Qualcomm modem, so they will not support the features seen here.