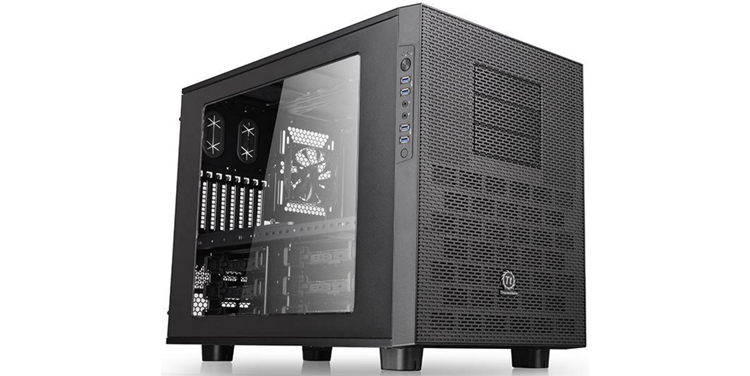 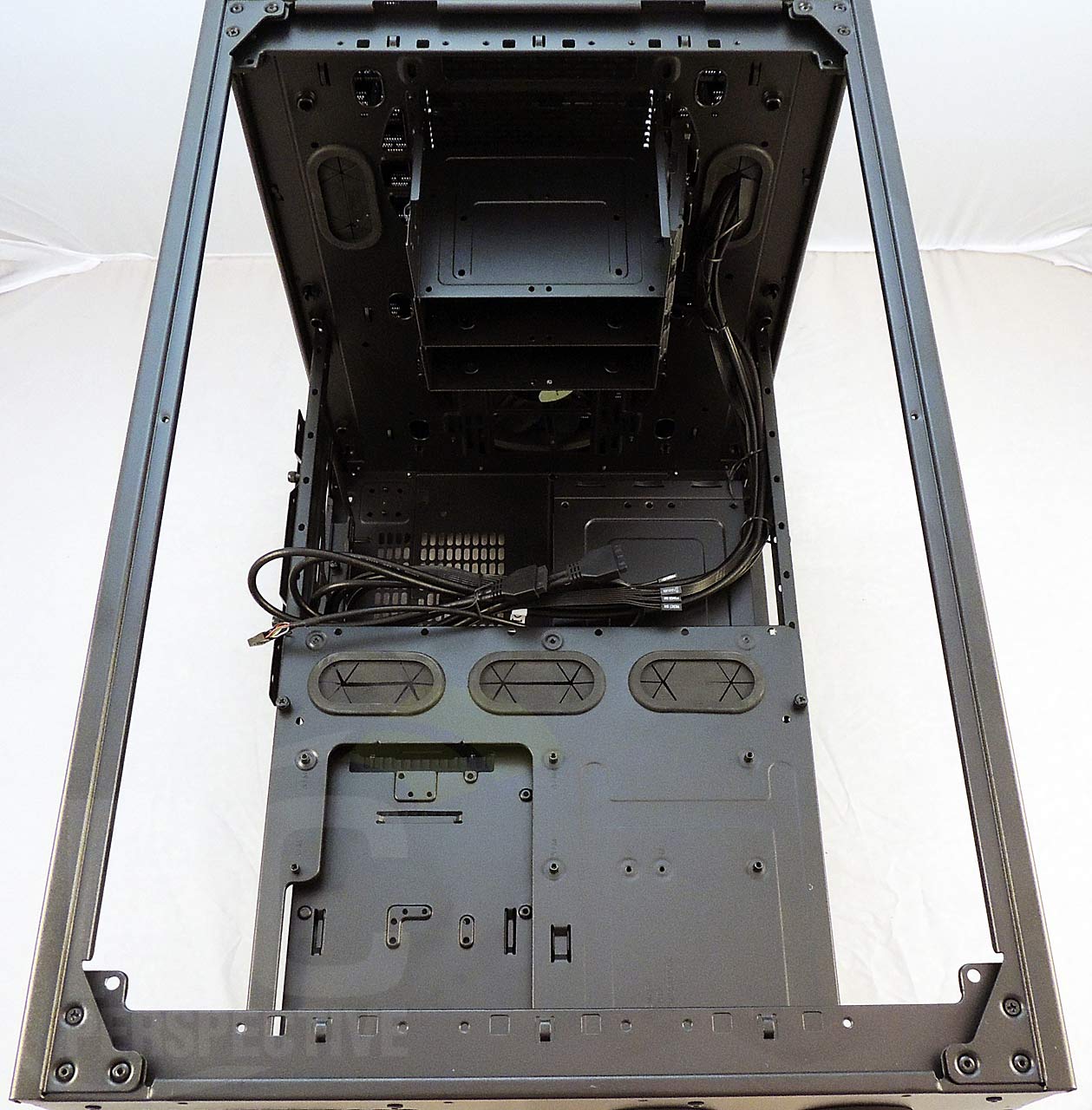 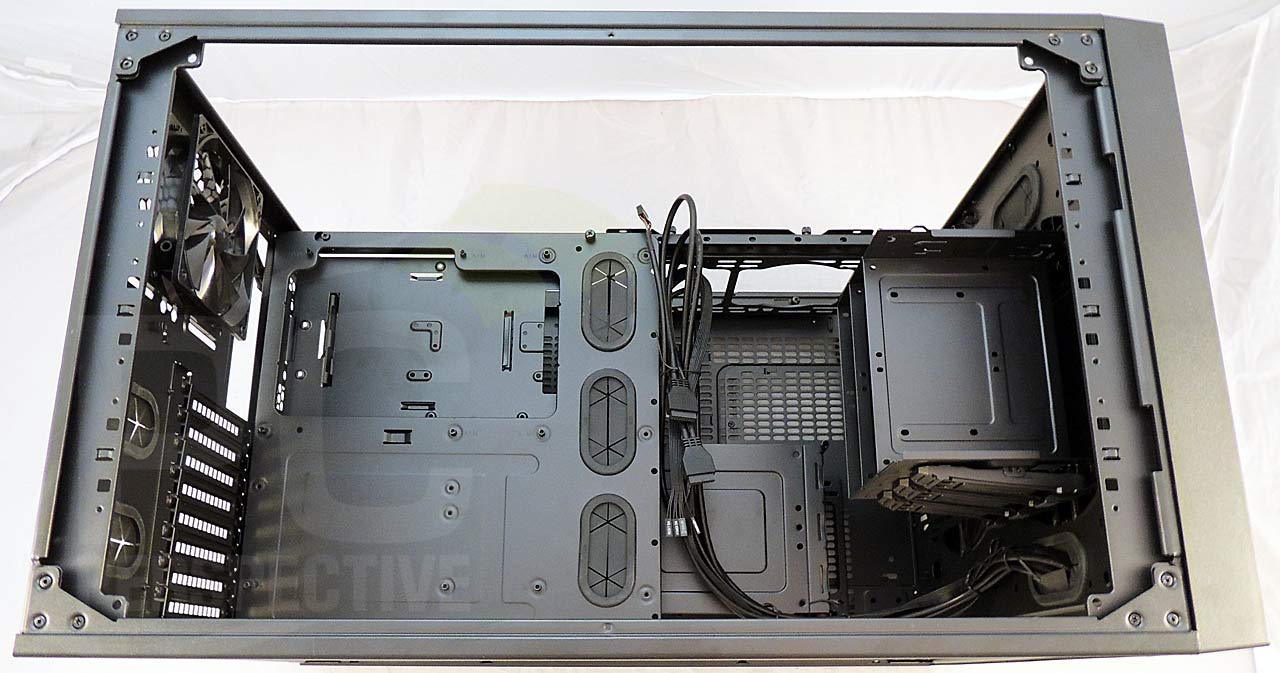 If you remove the top fan mounting brackets from the case, you get a much better view into the cases internal design and parts like the motherboard tray, device bays, and hard disk bays. Keep in mind that Thermaltake designed the Core x9 to be stripped all the way down to its frame, so we still have a few more layers to strip out. From the top-down view, you can see that the motherboard tray takes up the back half of the case, leaving quite a bit of room for components and liquid cooling equipment in the front half of the case. 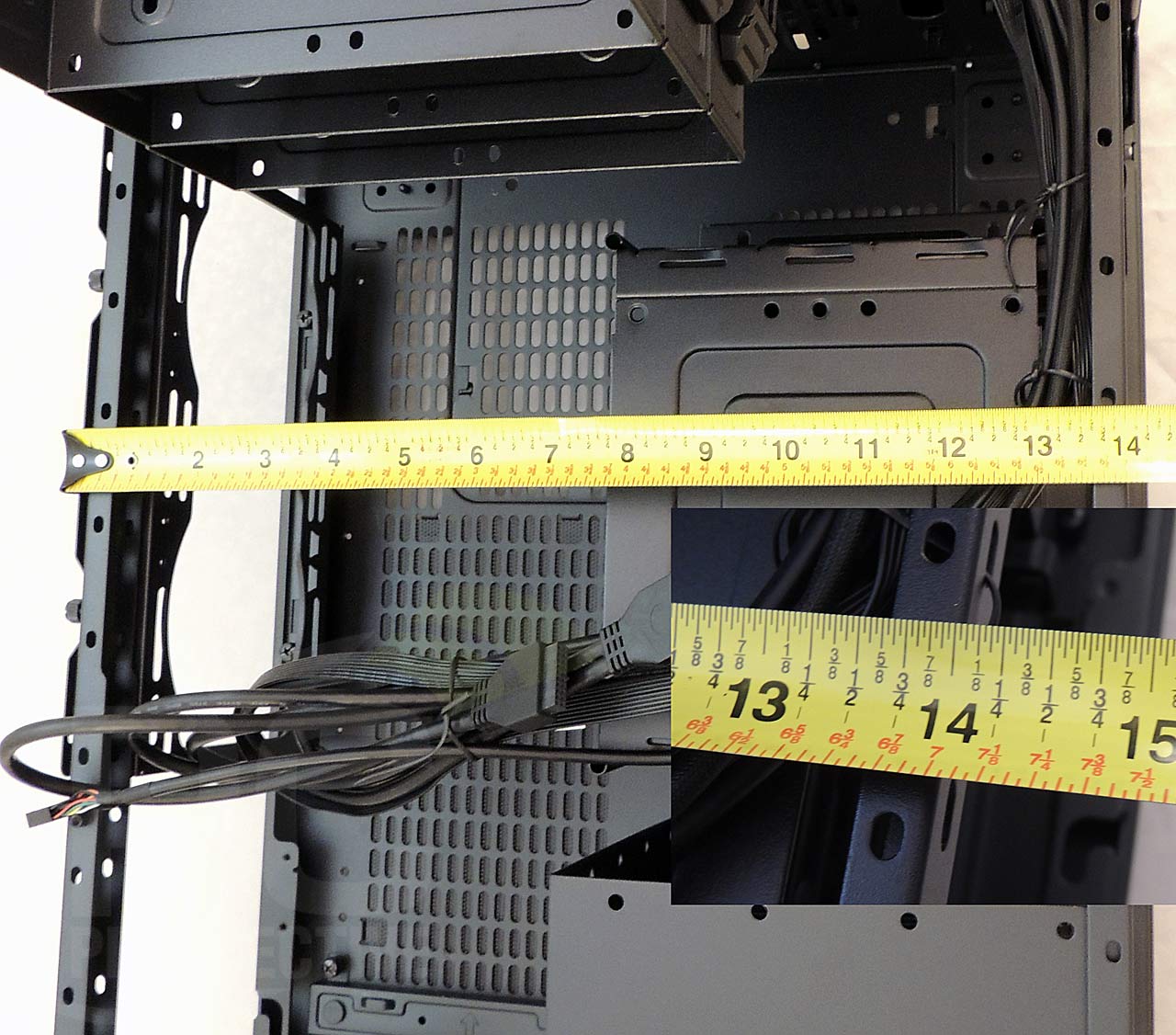 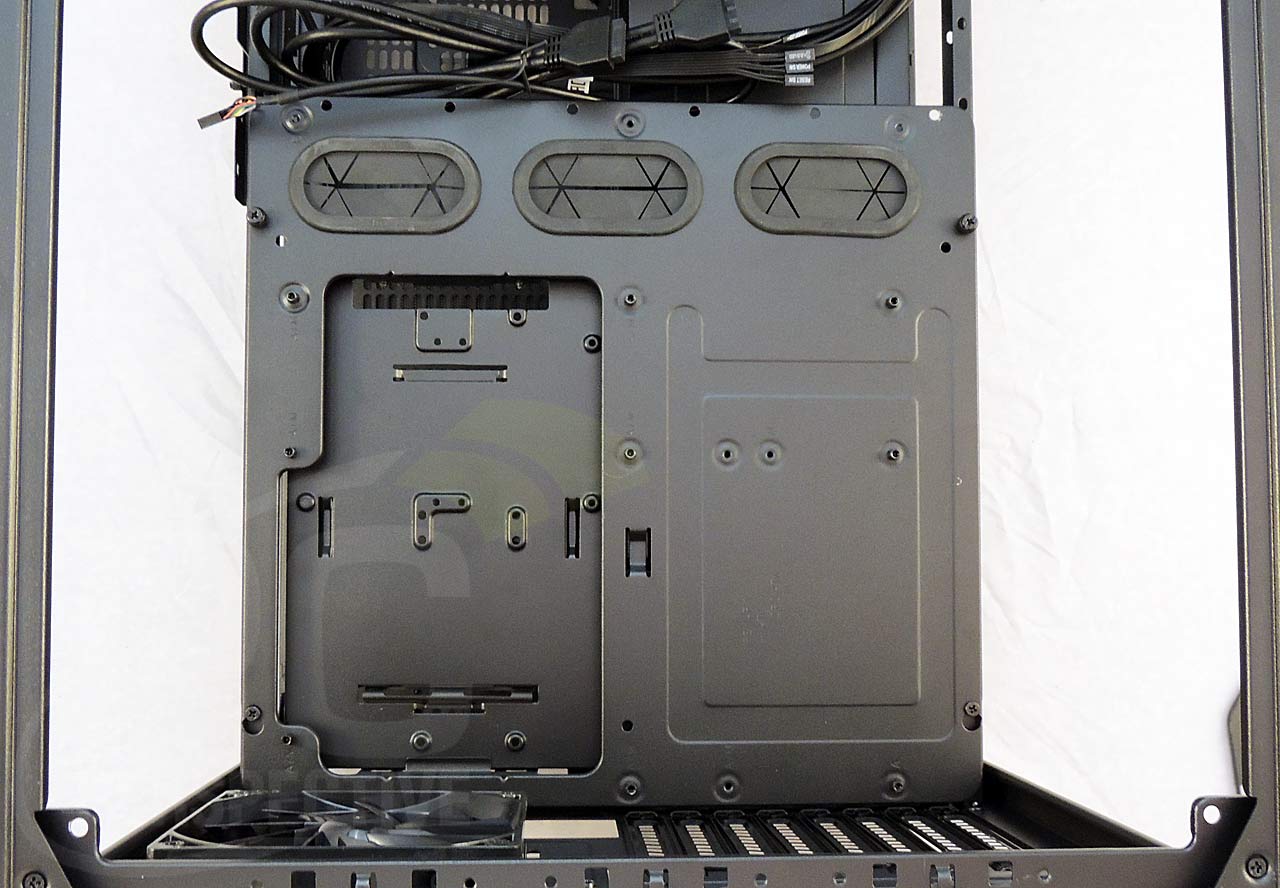 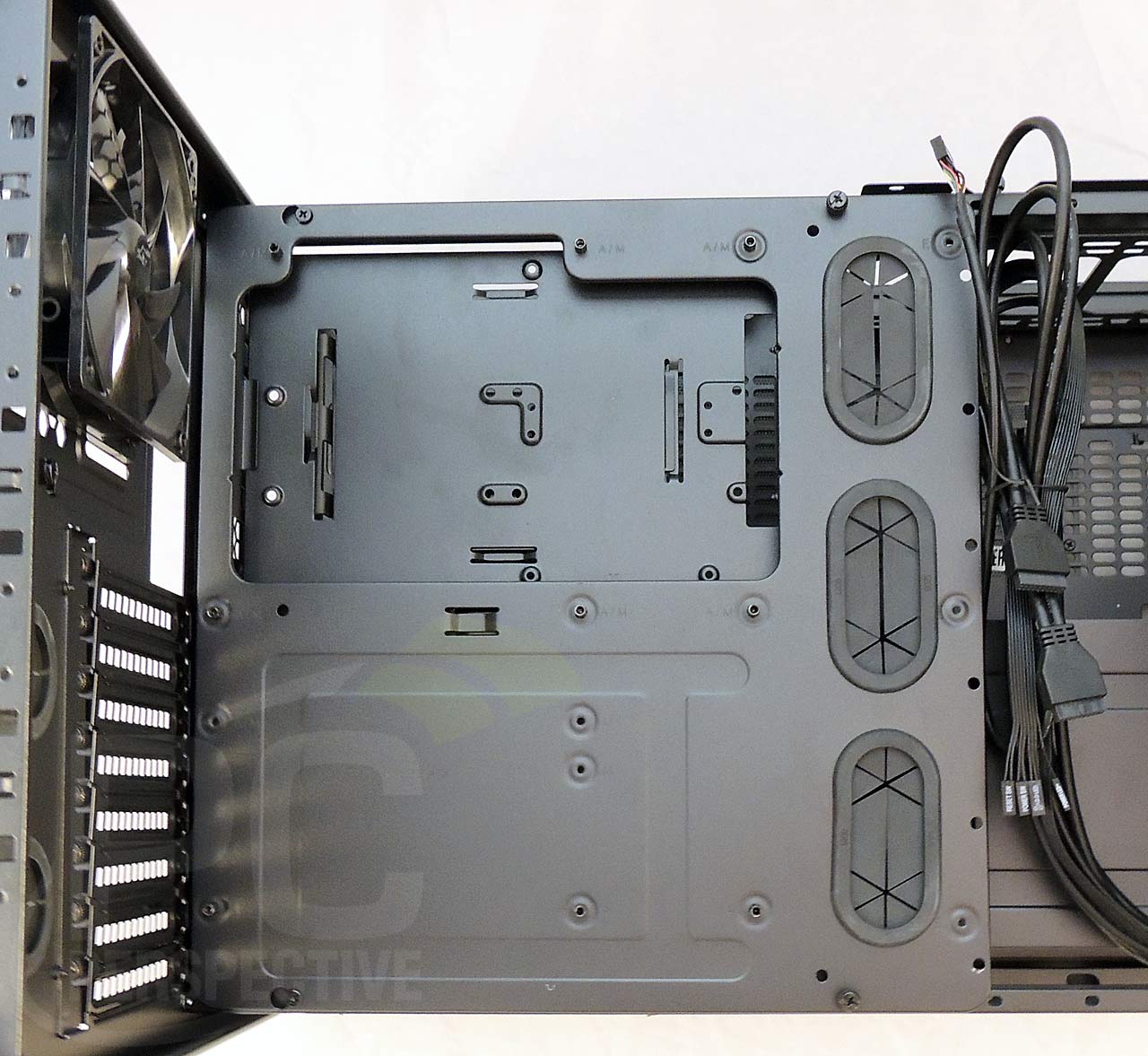 The removable motherboard tray is held in place with two thumbscrews in the front sides and two flat head screws to the rear. The rear screws fit into a channel in the tray allow the tray to slide and be removed without fully removing the rear screws. You simply remove the front thumbscrews and loosen the rear screws and the motherboard try slides forward and up to remove. Both sets of screws fix directly into the side mid-support beams. The grommeted pass-through holes in the motherboard tray are positioned perfectly for power, drive, and control cables no matter how large of a board you choose to install. They remain fully unblocked even with an E-ATX style board installed. The recessed portion of the tray (underneath the CPU socket area of the board) acts as a hard drive mount point with drives mounted underneath the plate. The plate is recessed so it does not impede any bottom mount plates used for cooler mounting to the CPU. 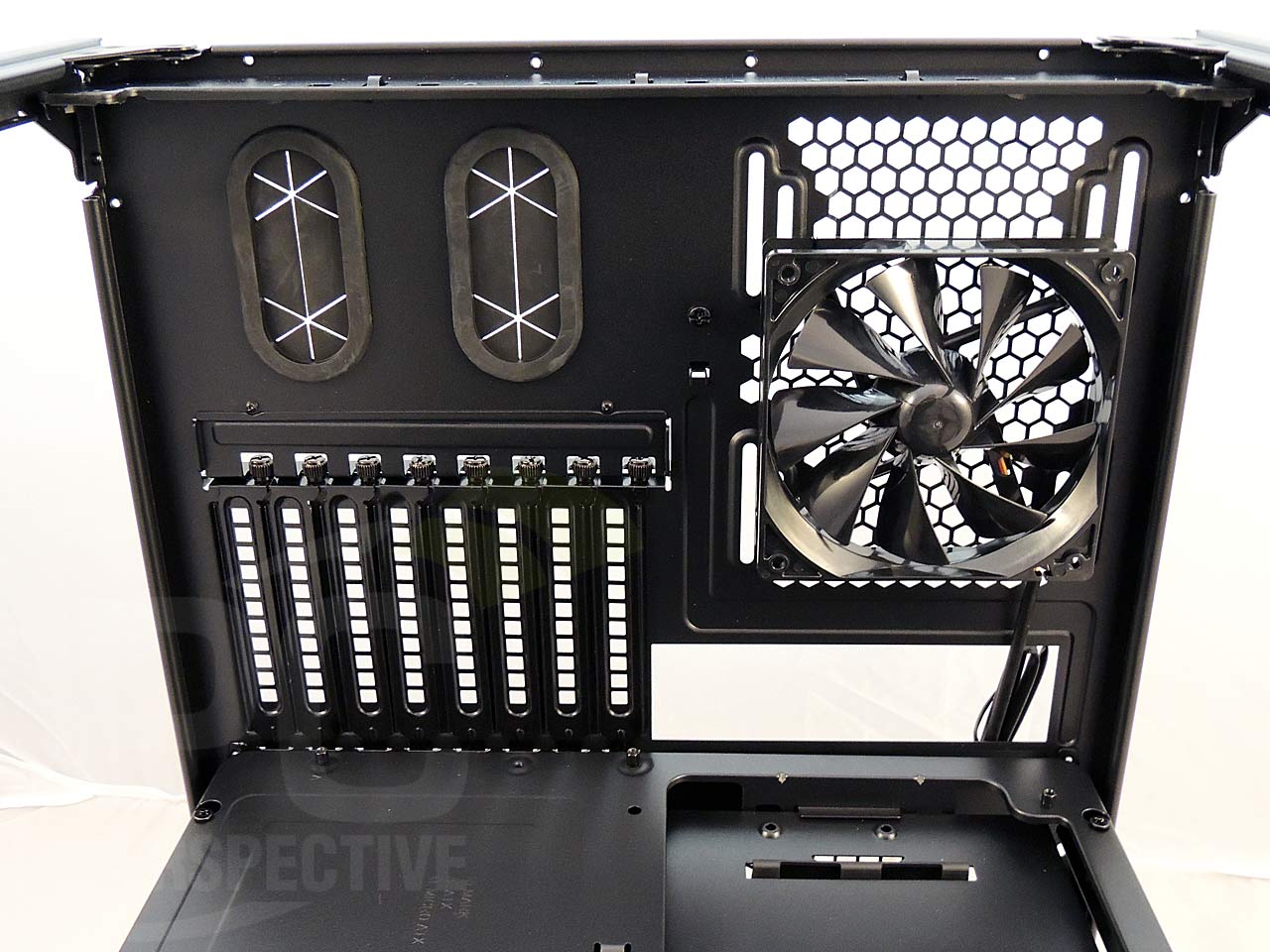 From the inside rear view of the case, you can see that the case supports mounting of up to eight PCIe style cards with thumbscrews holding the cards in place. Grommeted pass-through holes are provided directly above the PCIe hold downs for power or liquid coolant tubing routing. Further, the fan mount directly above the rear panel support up to a 140mm fan or radiator with a 120mm fan provided with the case by default. The provided fan mount holes allows for height adjustment as needed. 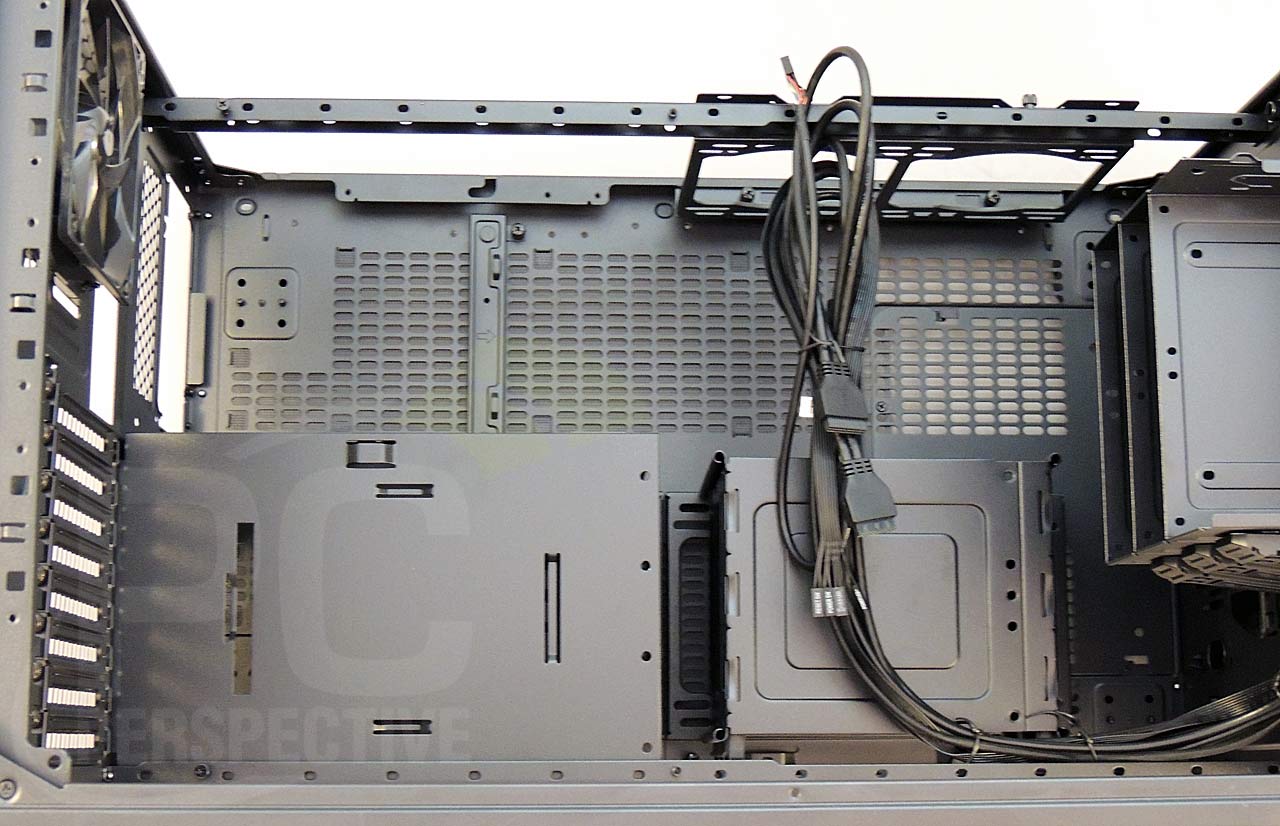 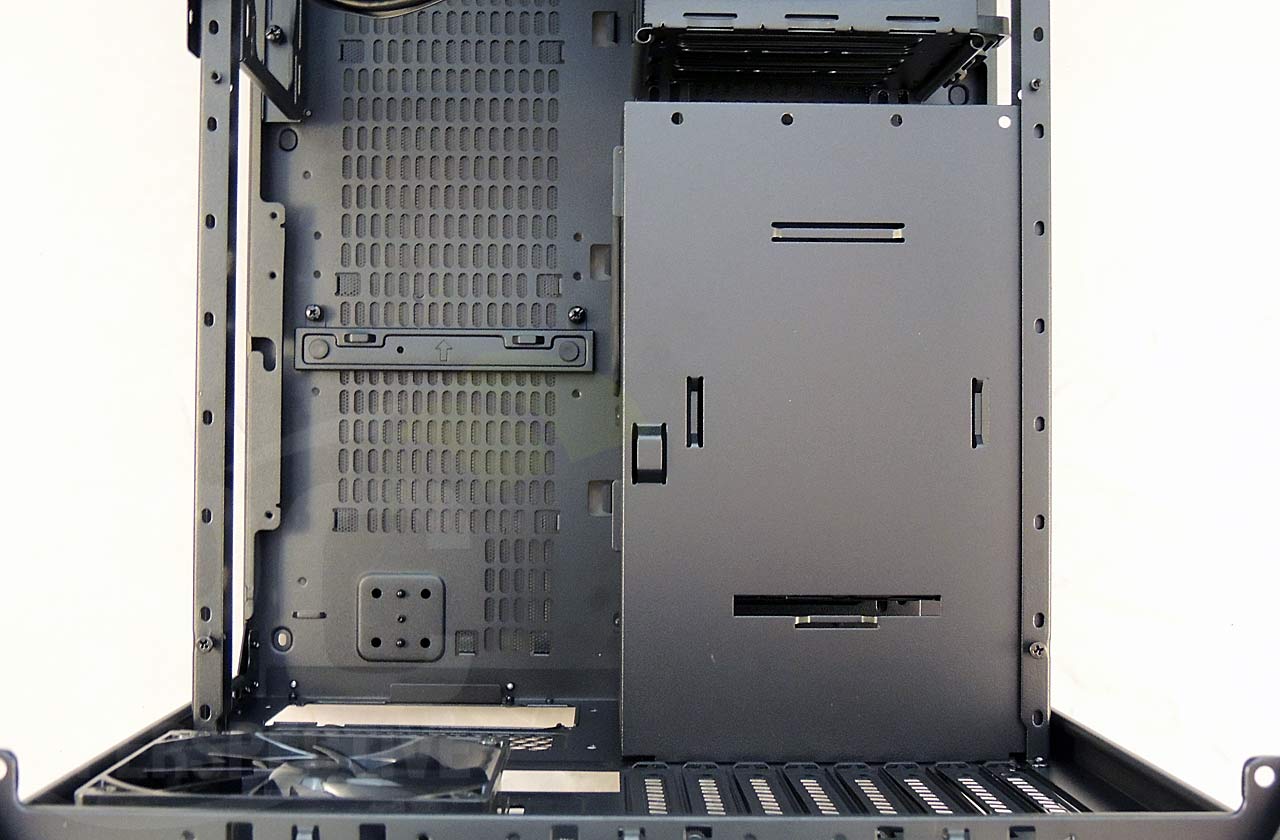 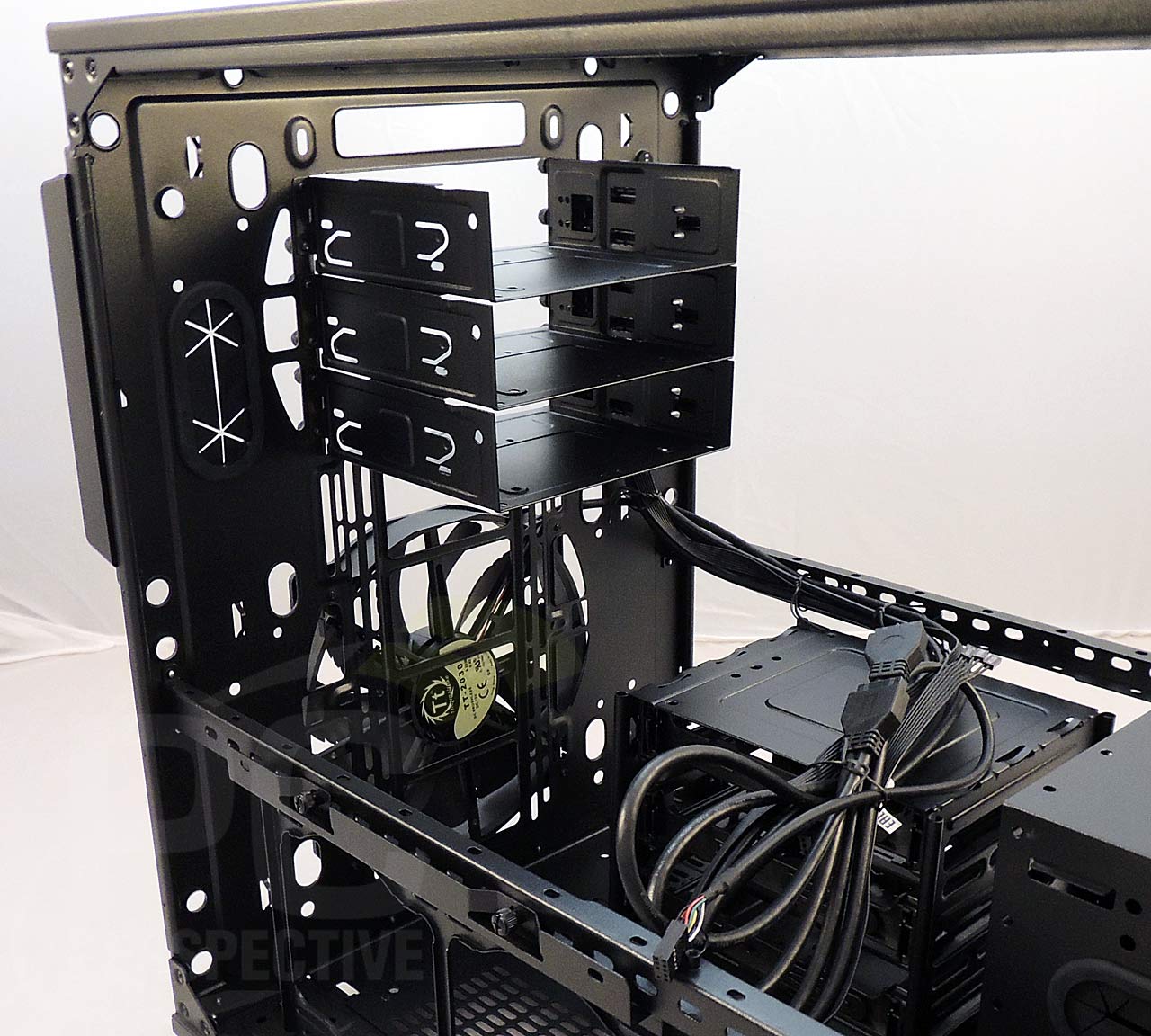 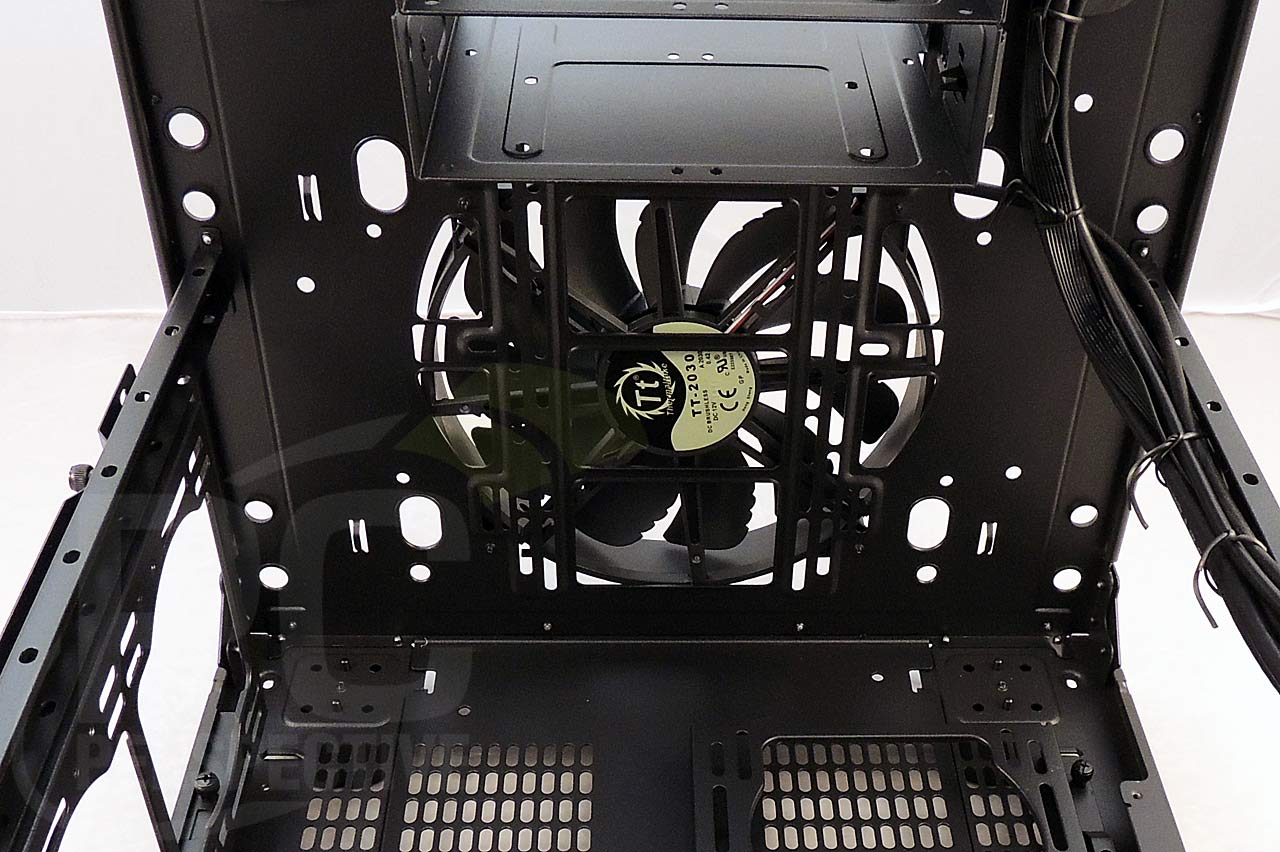 From the inside and with the front panel removed (as well as the motherboard tray), you get a good view of just how much space is available along the inside front of the case even with the device bays in place. Further, Thermaltake gave a lot of options for fan mounting and wire / tubing pass-through. 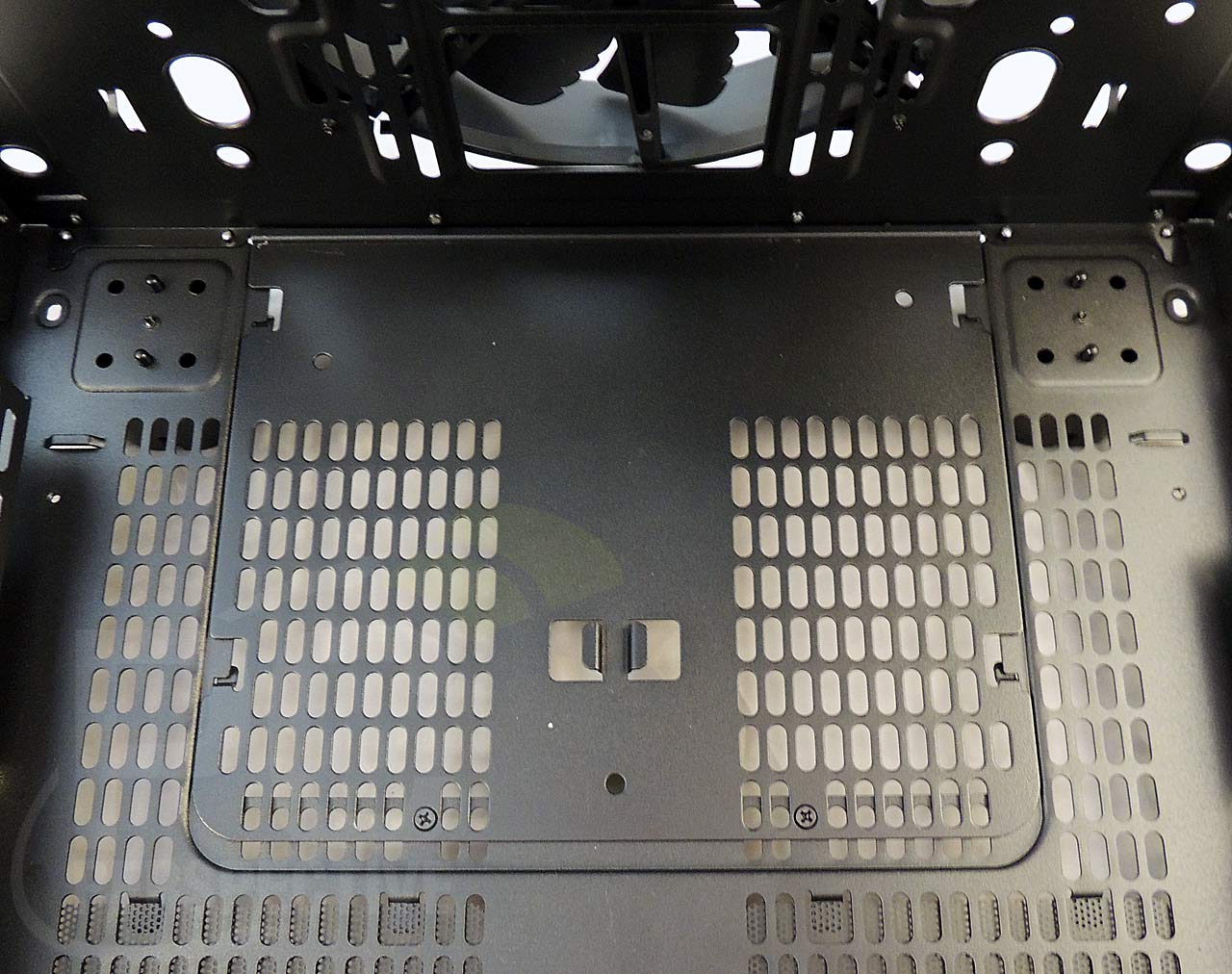 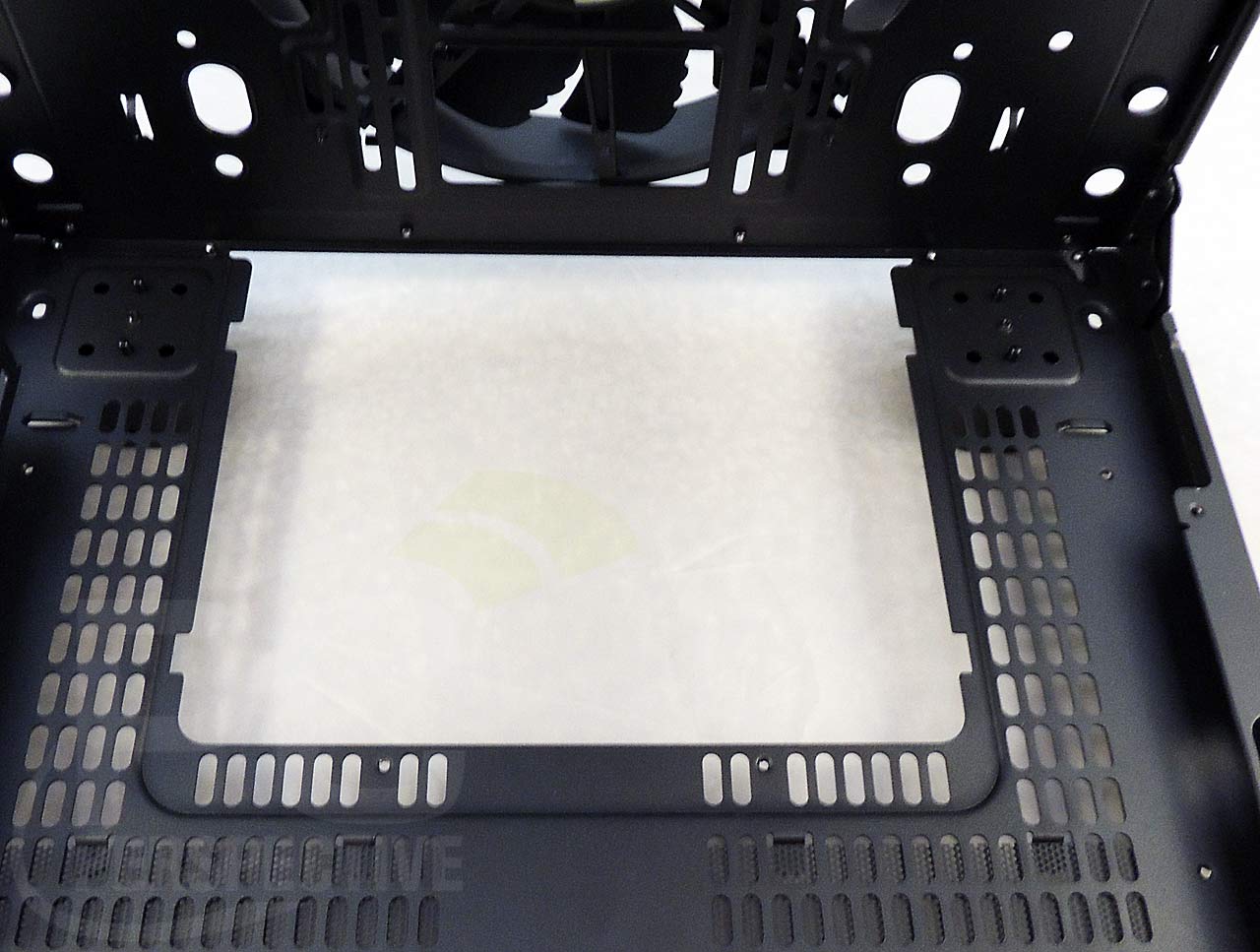 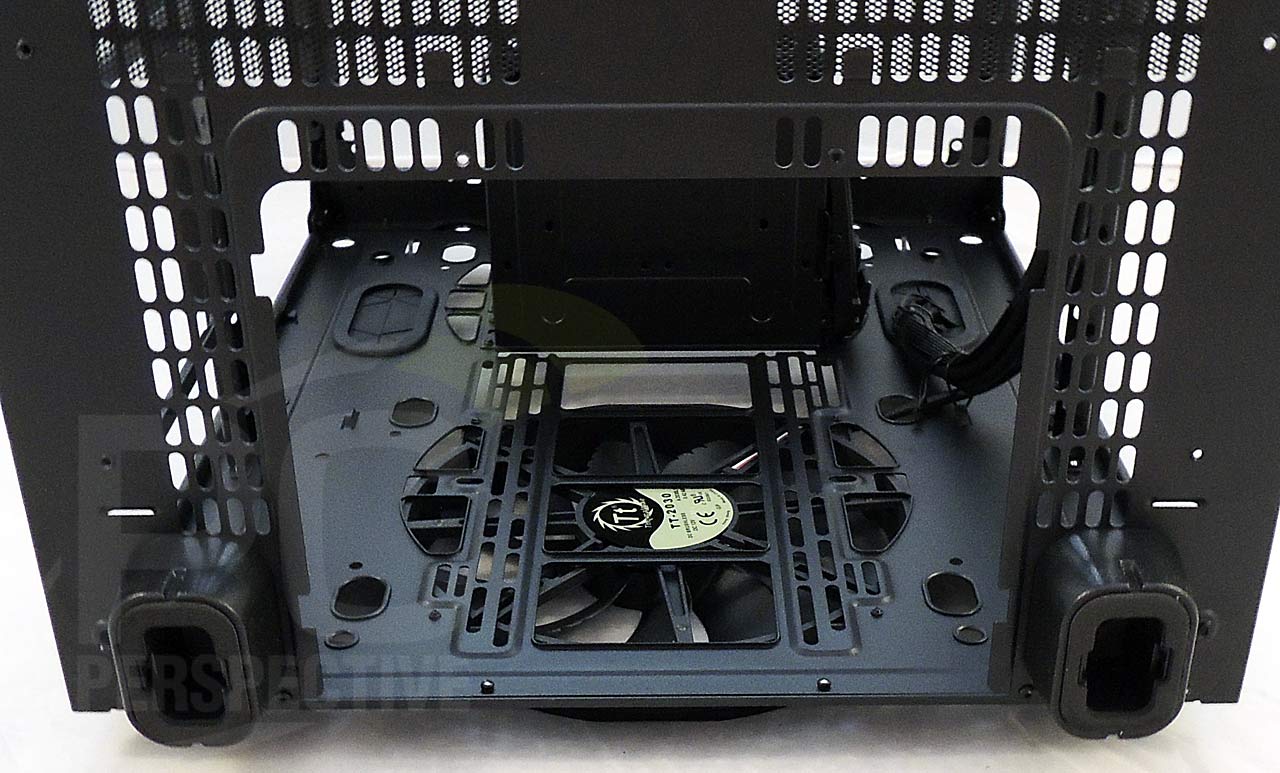 The removable pass-through plate, located in the floor of the case just behind the front panel fan, is held fast by to flush-mounted screws to the rear of the panel. The panel has tabs on its bottom that slid into matching slot in the floor of the case. Once removed, a large pass-through hole is revealed for use when stacking multiple Core X9 cases on top of each other. 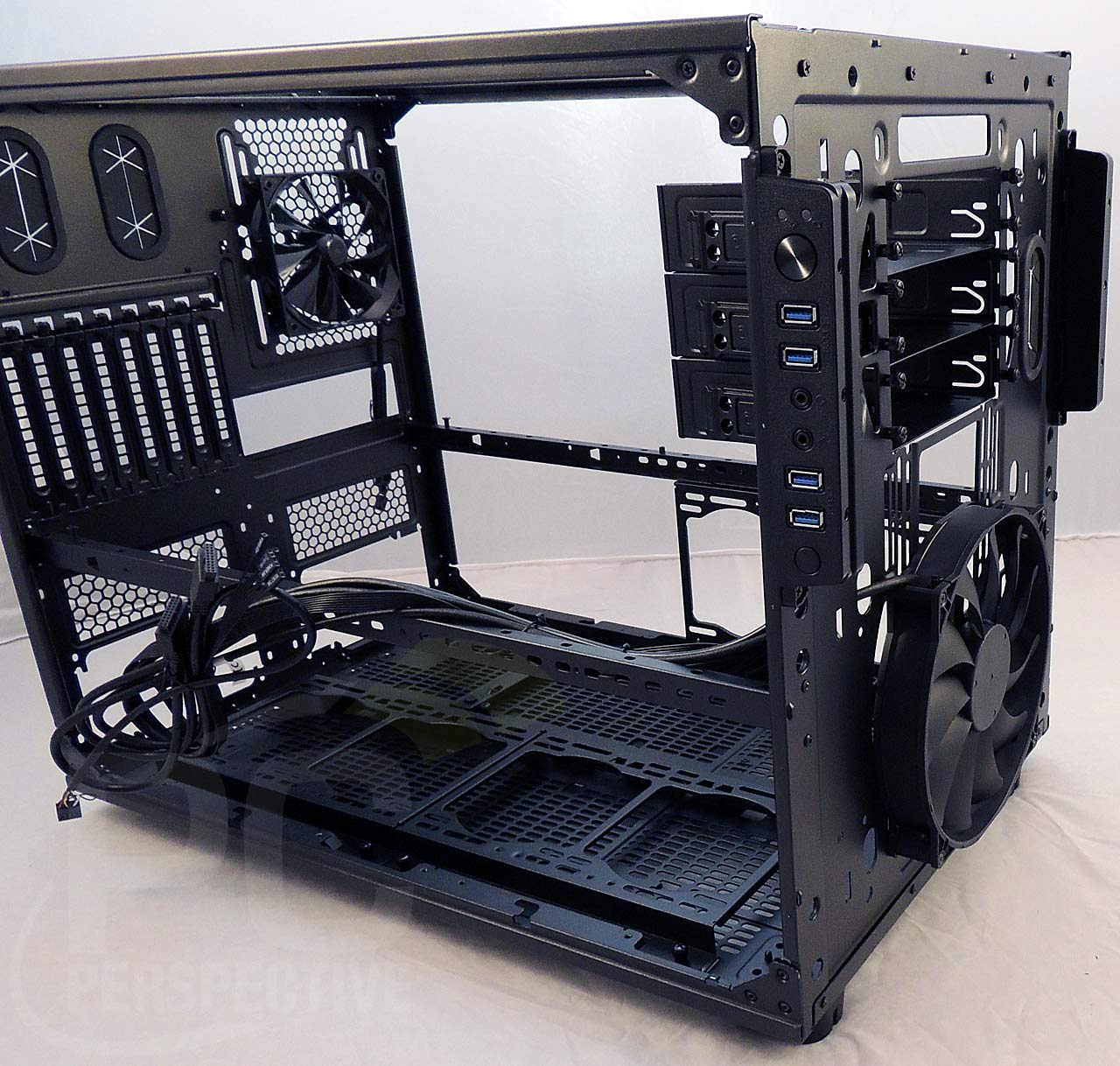 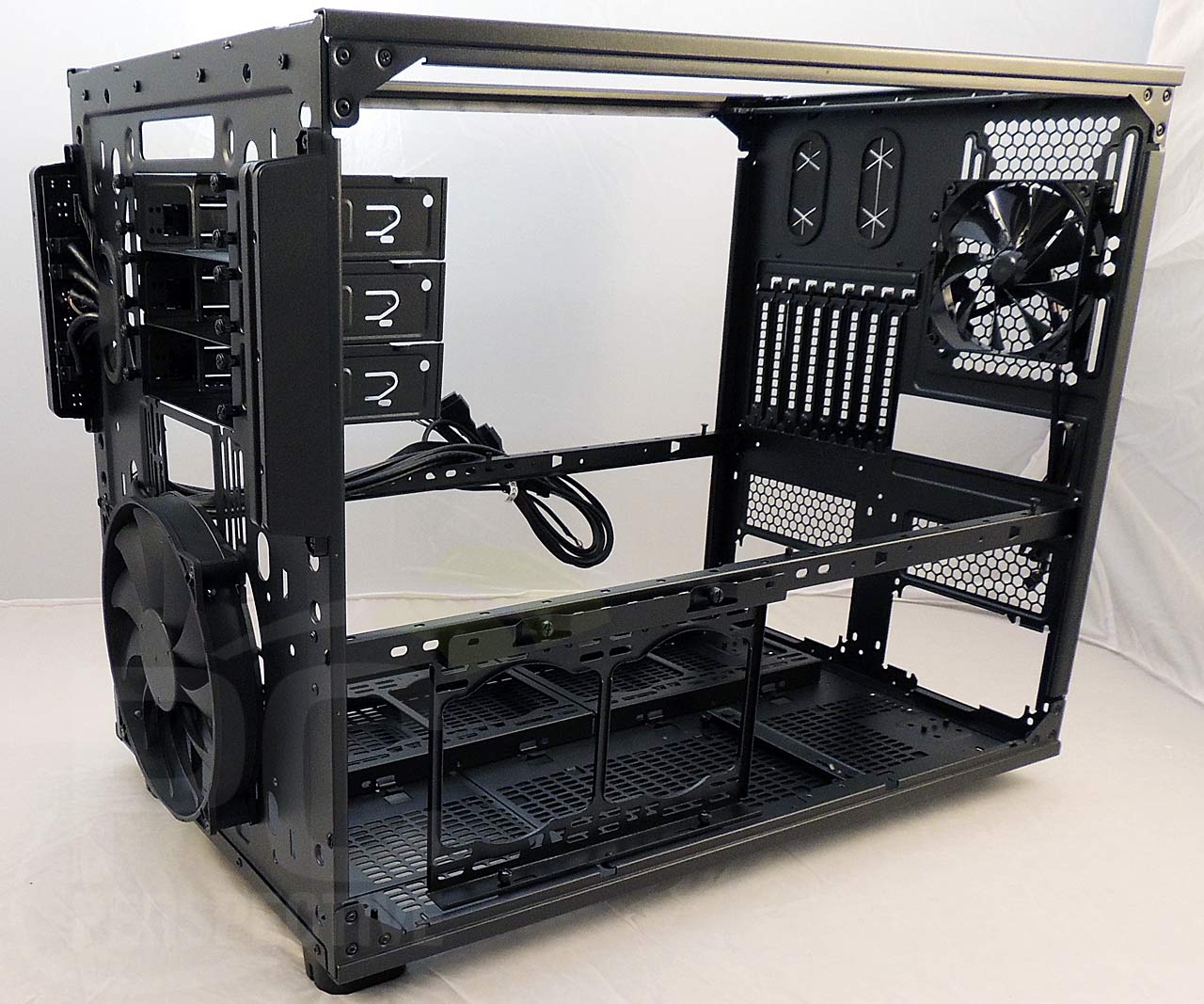 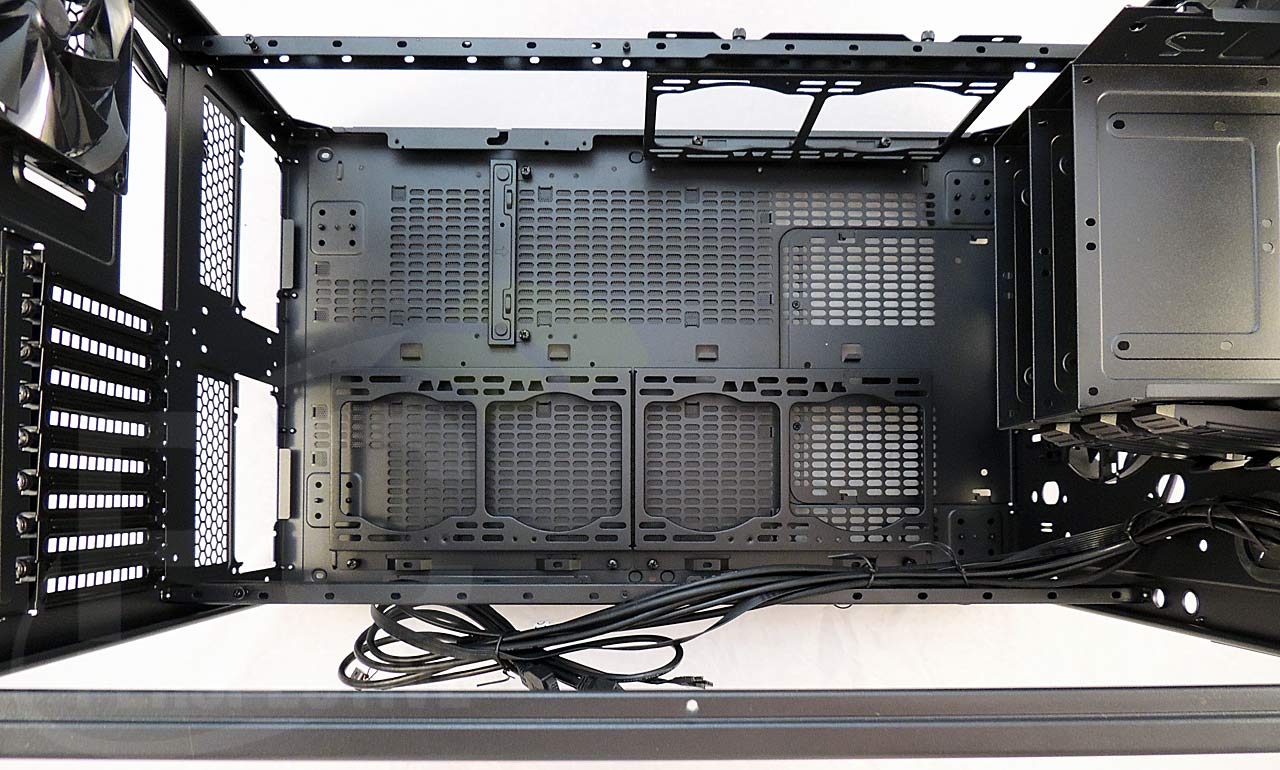 With all parts stripped from the case, you get much better view of the configurability of the case in terms PSU, fan/radiator, and drive bay mounting. The bottom left and right portions of the case are identically designed, allowing for bottom mounting of the support brackets in four different locations (front left, front right, rear left, rear right). The brackets can also be side mounted in up to four locations (front left, front right, rear left, rear right). In the bottom mount configuration, the brackets can be used for either fan/radiator mounting or for drive bay mounting. The side-mount configuration only supports fan/radiator mounting to the bracket. When used in the bottom rear left configuration, the mount bracket is hidden underneath the cover. The cover itself does not impede use of the bracket for either purpose, that being drive bay or fan/radiator mounting. 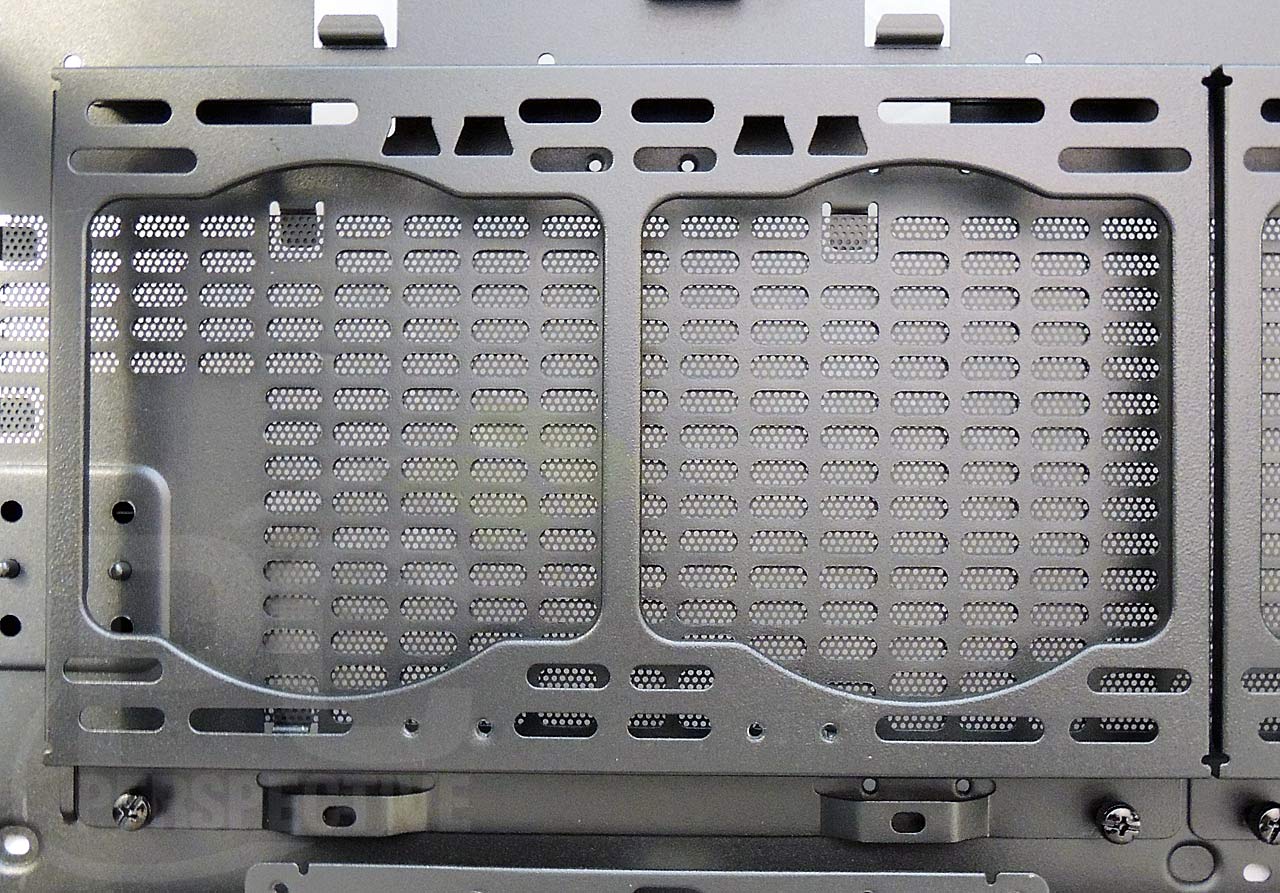 When used in the bottom mount configuration, the support brackets have hooks that fit in to mount holes towards the center section of the bottom plate and are held fast with two thumbscrews along the outside edges. The thumbscrews fasten directly into the case bottom plate. 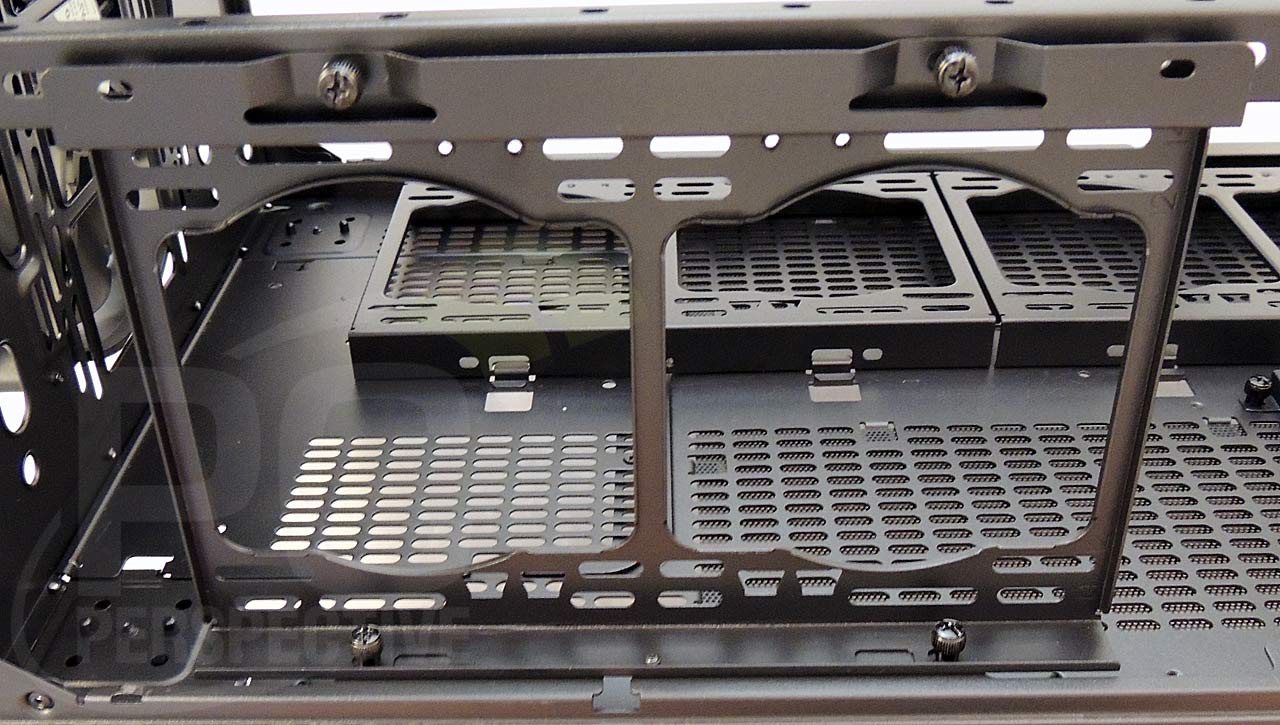 Watercooling get easier with XSPC 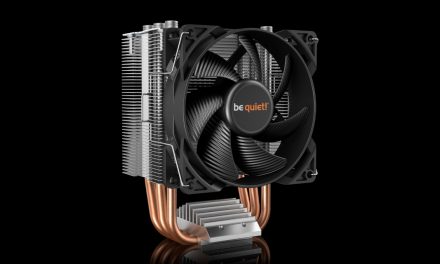