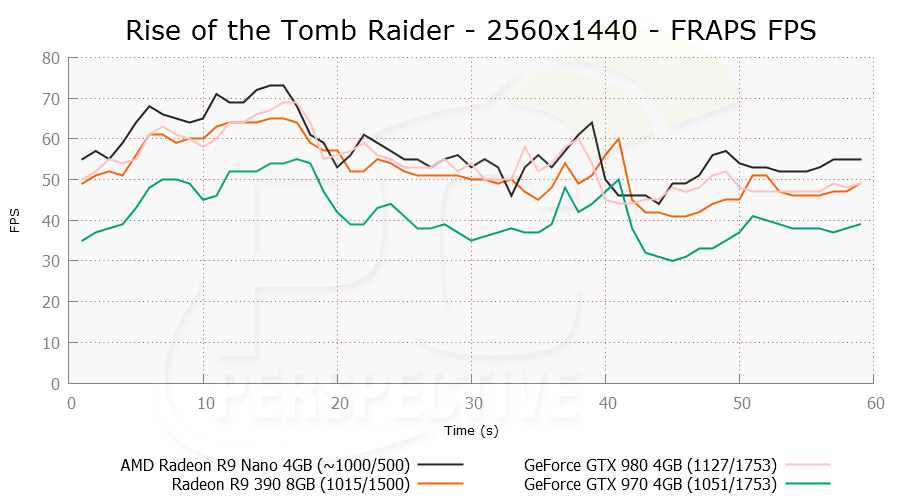 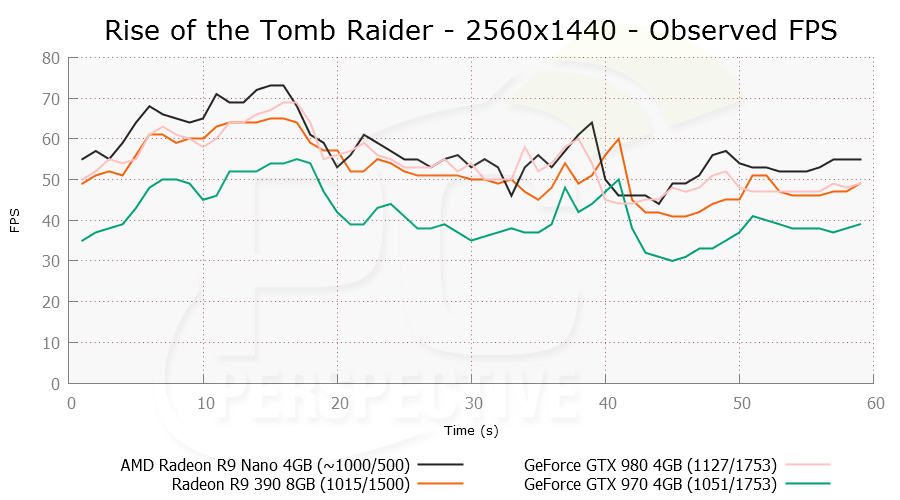 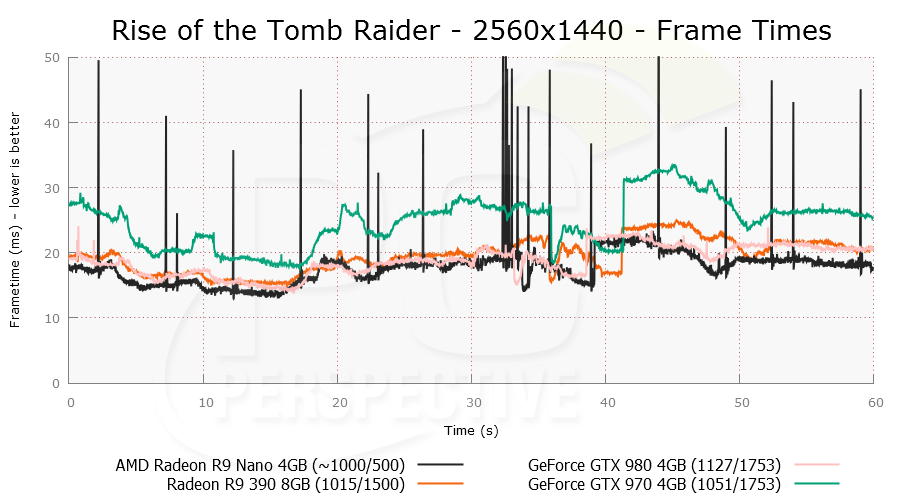 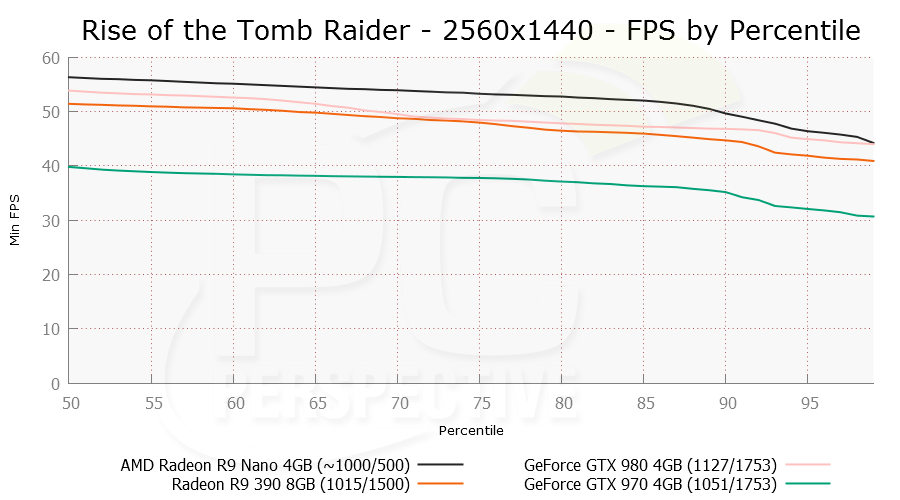 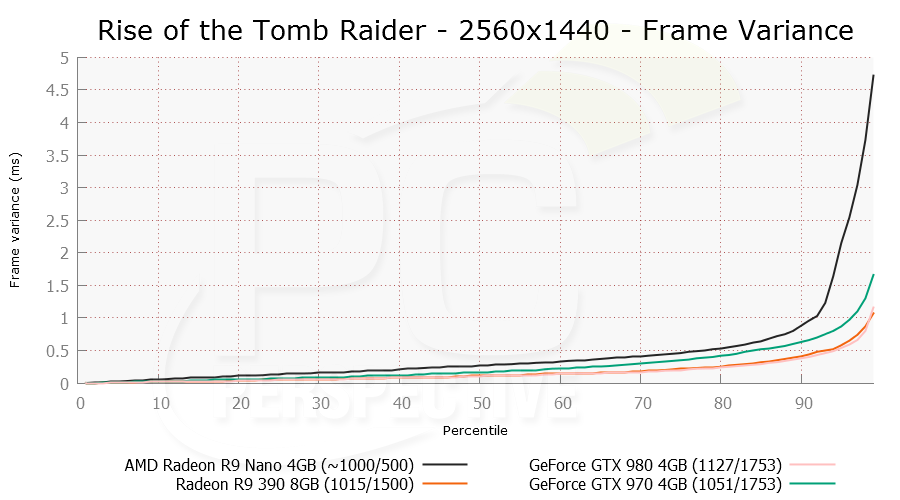 This comparison set includes the R9 Nano and GTX 980 again, but adds the Radeon R9 390 GB card and the GTX 970. The first thing I noticed was that the R9 390 did NOT exhibit the same frame time stutter and spikes that we saw with the both of the Fiji GPUs. This Hawaii-based GPU appears to be running much more smoothly than the R9 Nano, even if the average frame rate it provides is 6-7 FPS lower. The GeForce GTX 970 falls behind the other cards in this comparison, getting just 40 FPS on average at 2560×1440 with these image quality settings. 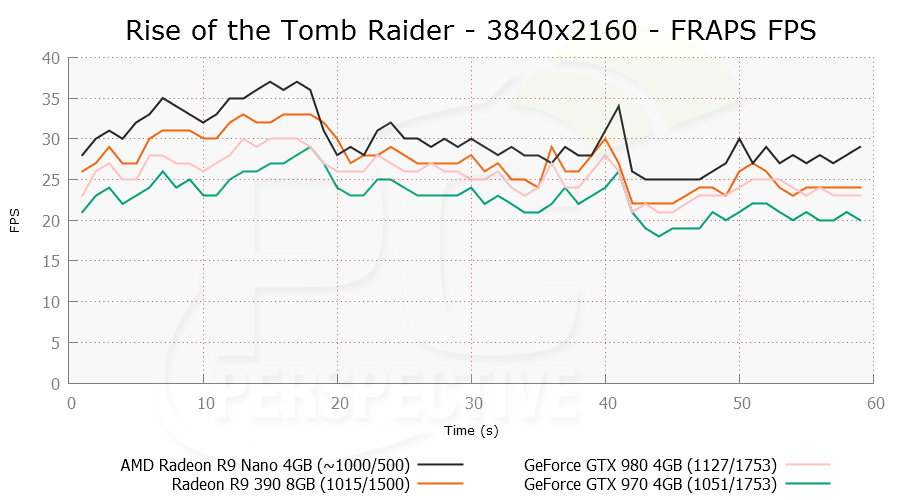 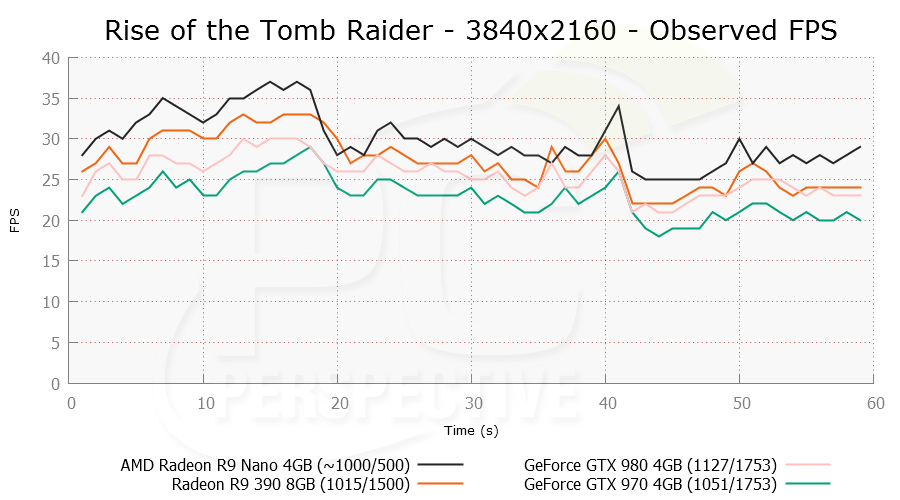 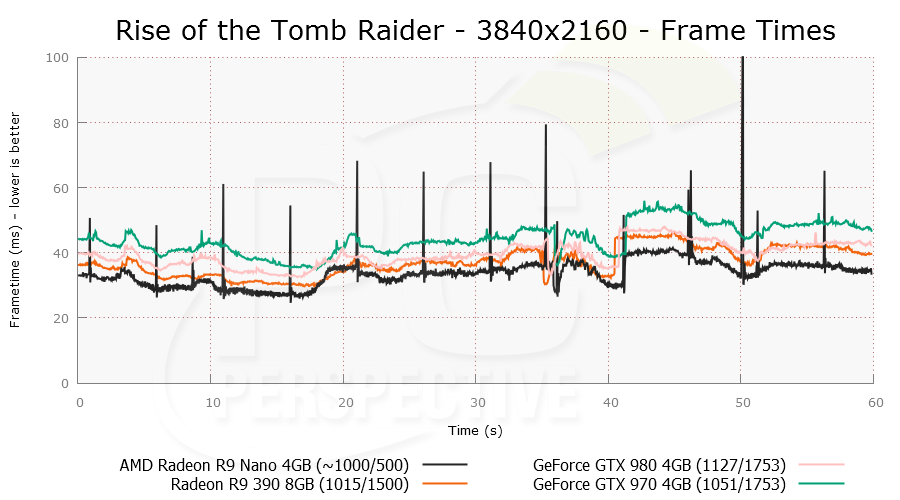 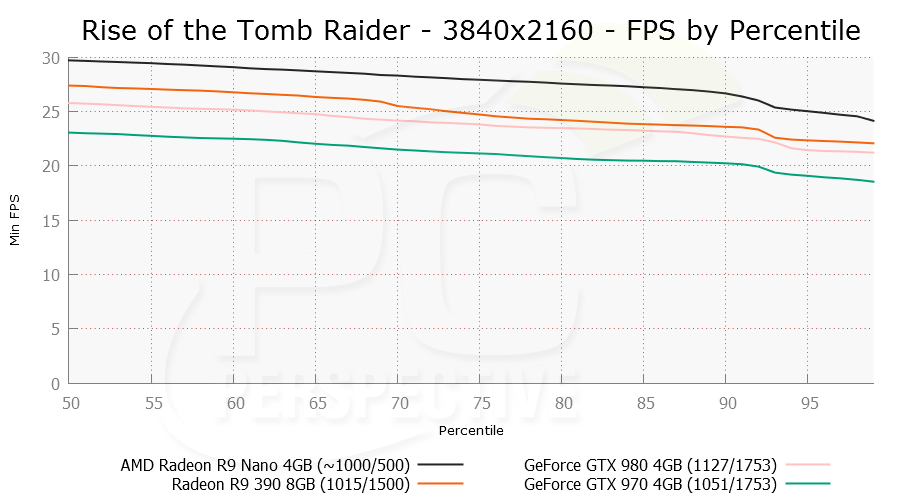 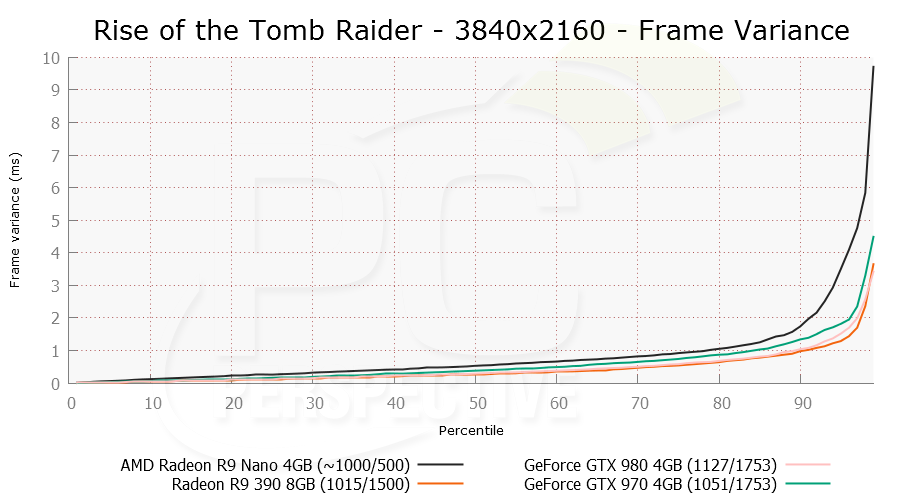 None of these cards are going to handle Rise of the Tomb Raider at 4K well, but it's still interesting to see the Radeon R9 390 doesn't exhibit the spikes either. The much less expensive R9 390 is actually outperforming the GTX 980 here though no one should be playing this game at 25 FPS!

The early results are in and the verdict is….Rise of the Tomb Raider is going to be tough on GPUs at maximum image quality settings. Obviously you'll be able to turn IQ settings down to get frame rates where you want them with your hardware, but if you are looking for a game to showcase the power of your shiny new graphics card, RoTR is going to hit the spot nicely. In my play testing with the game I found myself stunned by the presentation in numerous places, especially when coming across a new area for the first time. Though some users will complain about the performance levels on THEIR hardware with this game, I believe this is the trend we want to see for PC gaming – improved visuals over consoles even at the cost of higher end hardware to run it. Software pushes hardware, pushes software, and so on. 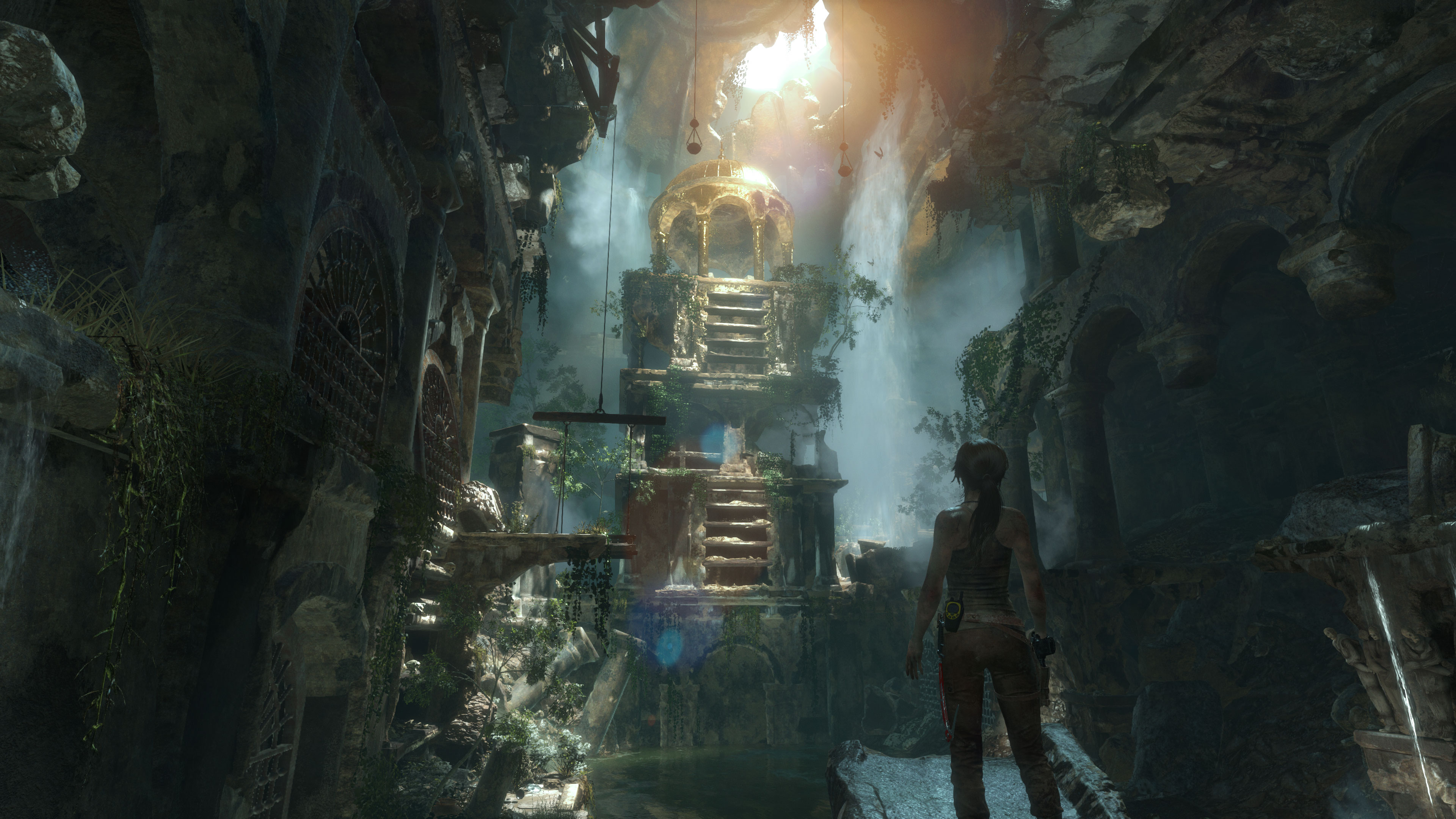 I'm confused about the frame time spikes on the Fury X and R9 Nano from AMD and hopefully the company is working on a fix for it. I asked AMD for a newer driver than the 16.1 hotfix release on their website but was told it would be at least Monday before one would be available for media. NVIDIA on the other hand had a WHQL driver ready for Rise of the Tomb Raider and this weekend's Tom Clancy's The Division beta the day before the game's release. AMD's Fiji architecture is still performing well in the game, but those spikes are noticeable in the play through and is just not how consumers $600+ hardware should perform. Hopefully we'll get an update for it soon! 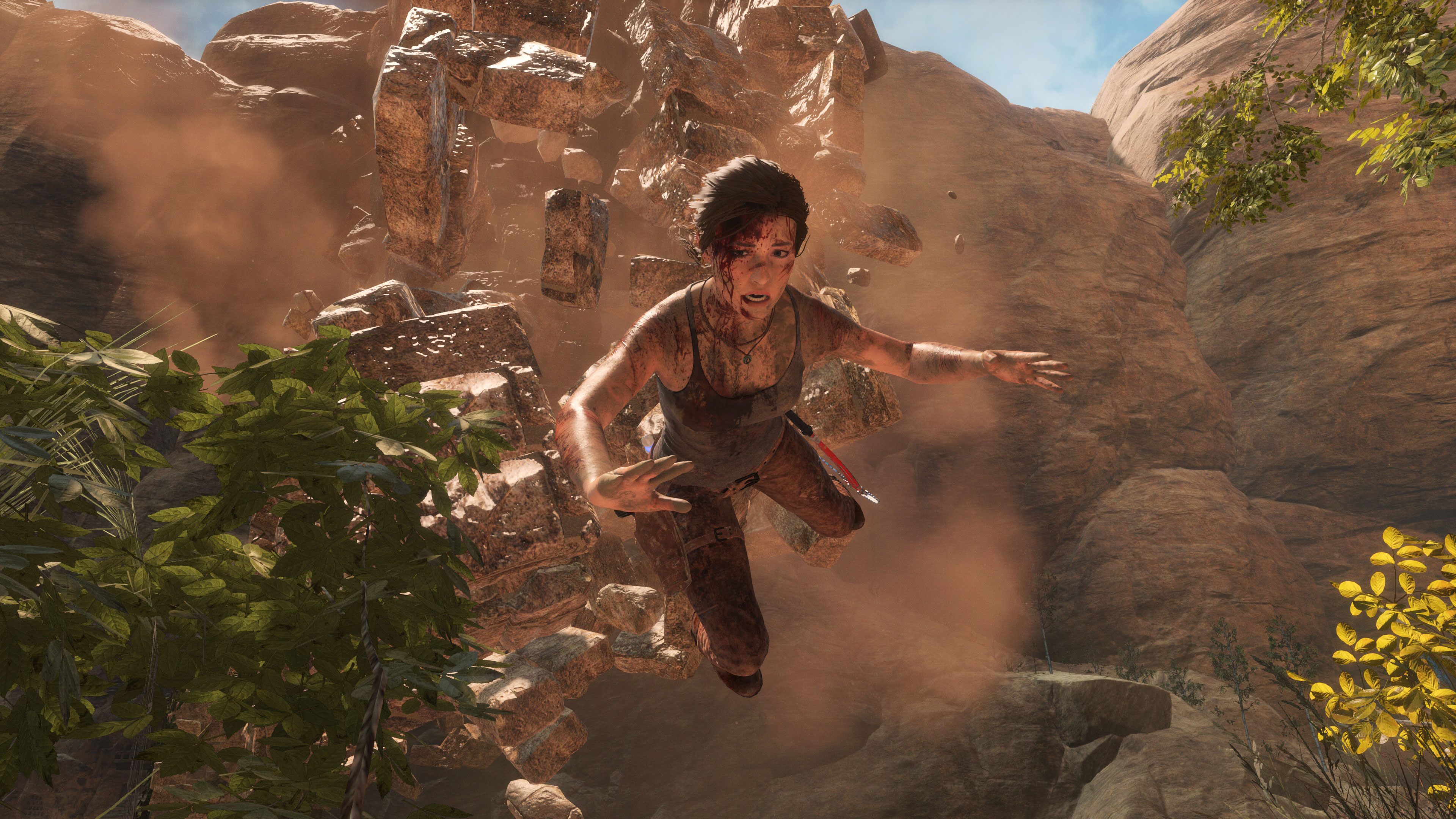 A quick side note: I tested multi-GPU with a pair of GTX 980 Ti cards just long enough to capture a 4K run through of our testing scenario but did notice in other areas that there are some visual anomalies present. Rushing water seemed to "flash" and the hair effects of PureHair (based on TressFX) were "jumpy." I'll continue to dive into SLI and CrossFire to see how it performs and behaves over the weekend.

UPDATE 2/5/16: Nixxes released a new version of Rise of the Tomb Raider today with some significant changes. I have added another page at the end of this story that looks at results with the new version of the game, a new AMD driver and I've also included some SLI and CrossFire results.