Startup issues (Steam Only):
Updated options screen with among other things:
Other fixes included in this patch:

All the emphasis above is mine. Clearly this is more than just a couple of bug fixes as the team at Nixxes has some significant performance and feature changes added. In fact, the options menus are changed, with a new option called Specular Reflections with an On/Off setting. 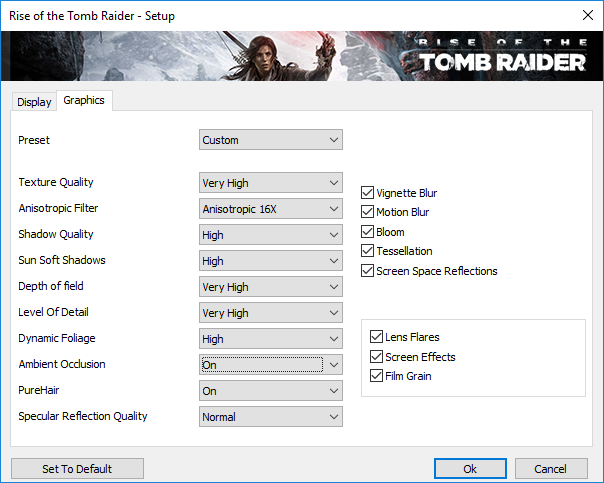 After some comments from readers that I should try the updated AMD driver released with Rise of the Tomb Raider fixes (16.1.1), I started to boot up the game again this morning to find the patch basically changes all of our previous results. (Nice!) So, in order to get some idea of what this new patch changes, and how multi-GPU scales from both AMD and NVIDIA on RoTR, I spent a few hours testing and compiling results.

I am only retesting one GPU from each brand here: the GeForce GTX 980 Ti and the Radeon R9 Nano. (Note that I wanted to retest with the Fury X, but since I only have a single GPU of that card, and I wanted to test CrossFire, I went with the R9 Nano.)

In the results below, you'll see two tests for each card. The NVIDIA GeForce GTX 980 Ti results are both using the 361.75 driver while the new results for the Radeon R9 Nano update from the 16.1 hotfix to the 16.1.1 hotfix driver. Both of the new results are on the updated revision of Rise of the Tomb Raider. Please keep in mind that I am not directly comparing the GTX 980 Ti to the R9 Nano, they are in very different price segments, but I did want to see how high end GPUs from both vendors behaved with the updated patch (and latest AMD driver). 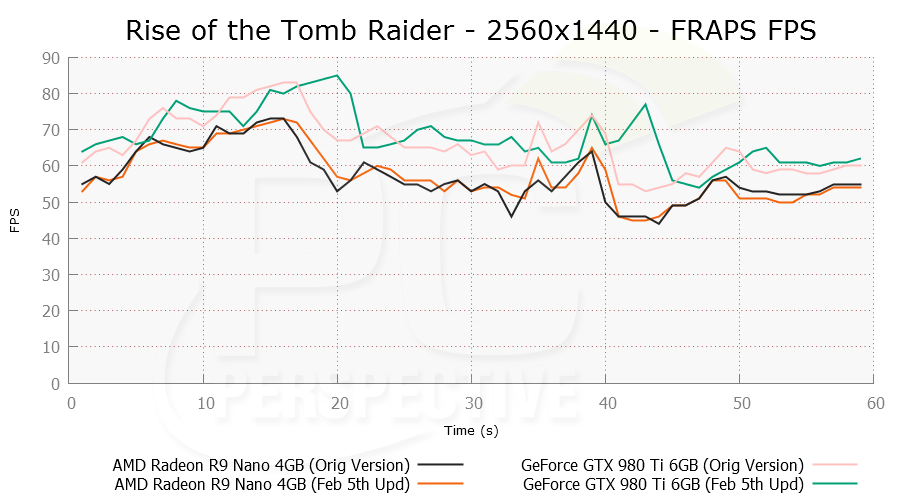 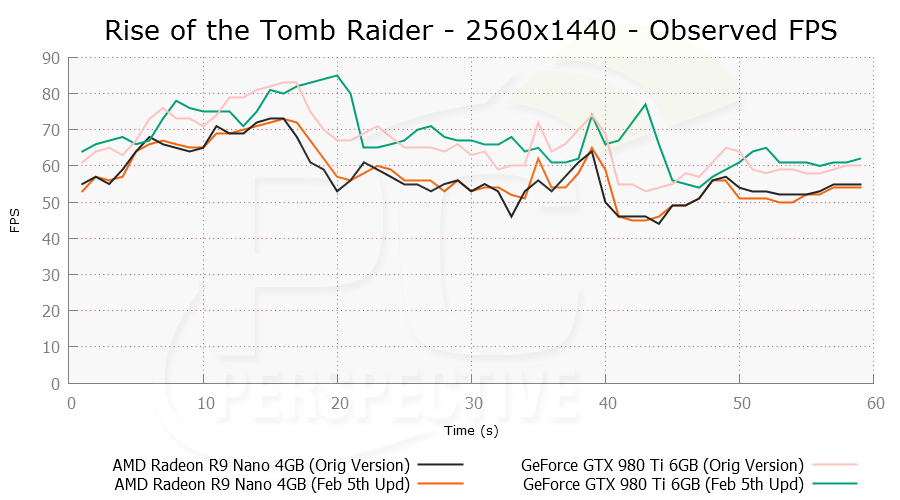 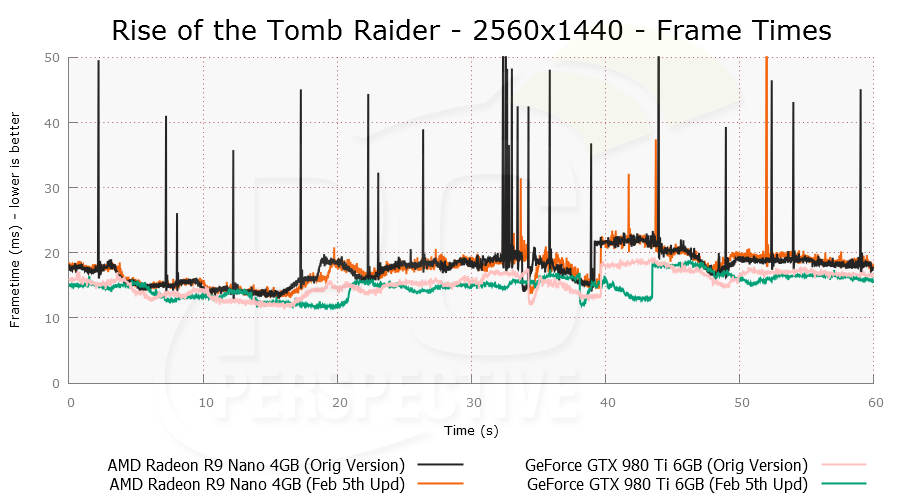 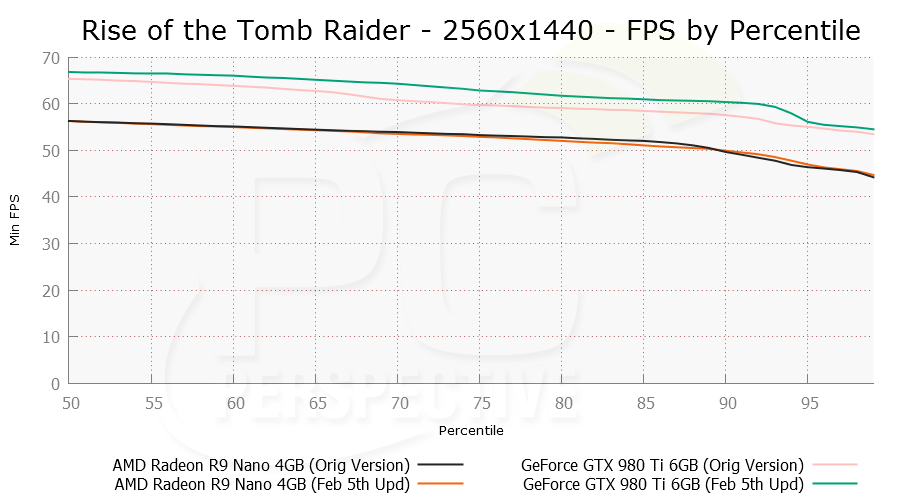 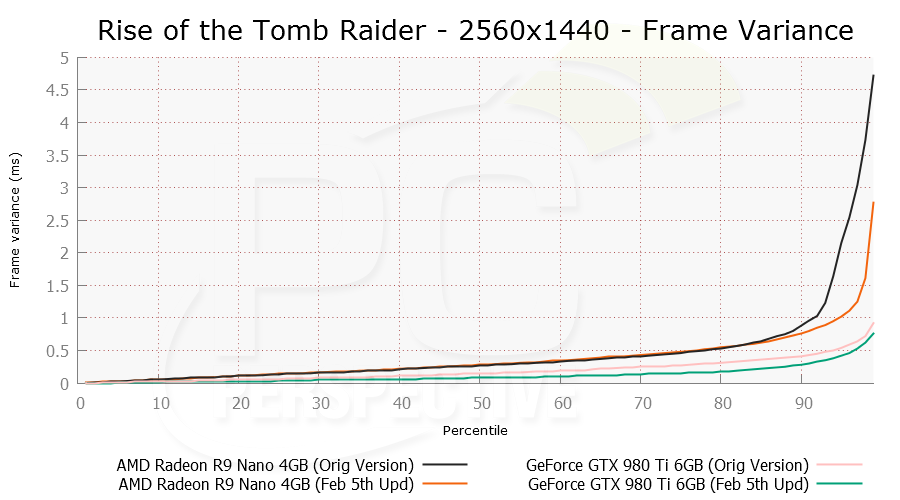 First, the GeForce GTX 980 Ti results show a slight increase in performance, going from 67 FPS to 68 FPS or so, with no discernable change in frame time smoothness. All good there. The R9 Nano sees no performance improvements if you look only at the average frame rate, but the number of high frame times and hitches in the game is reduced greatly, lowering our 95th percentile frame time from ~2.5ms to 1.0ms. 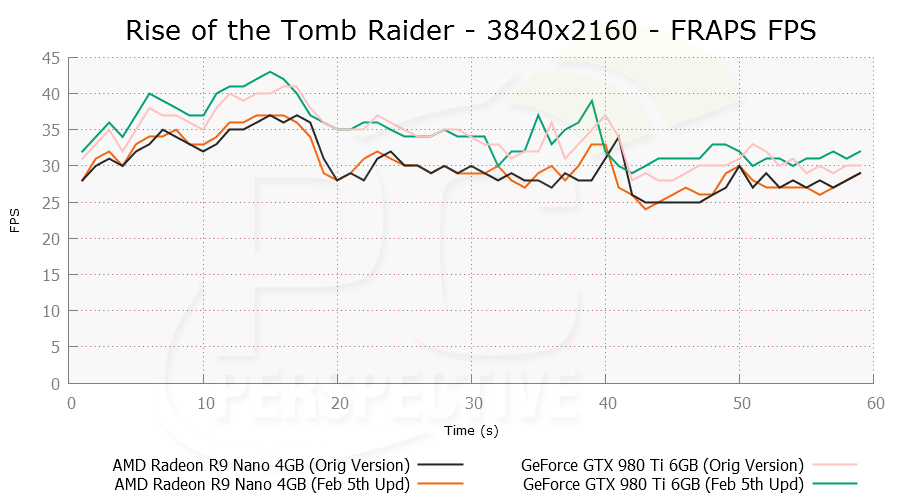 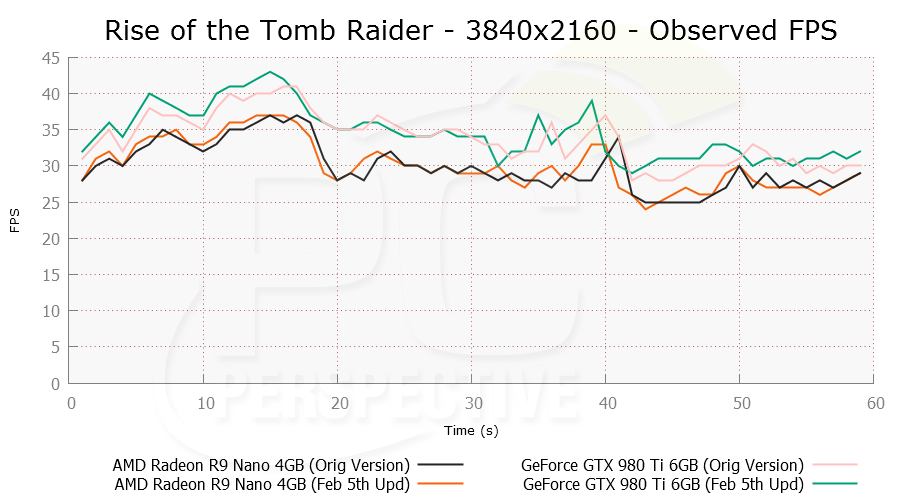 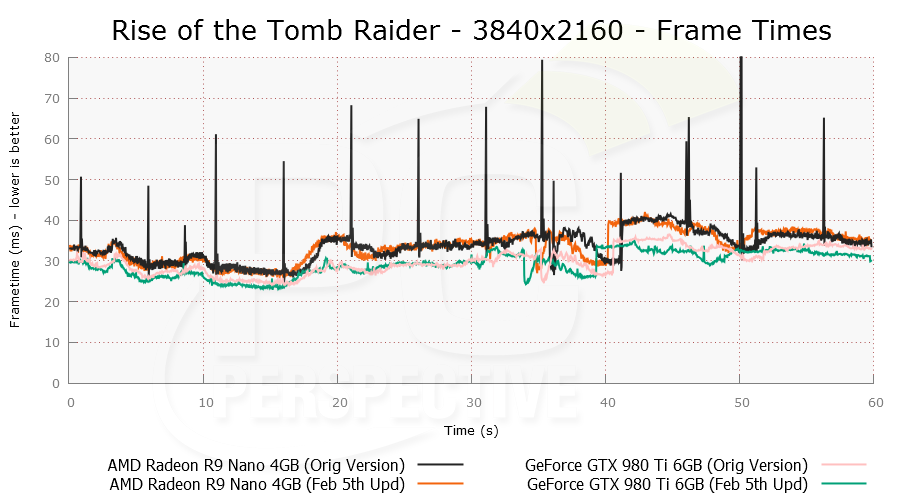 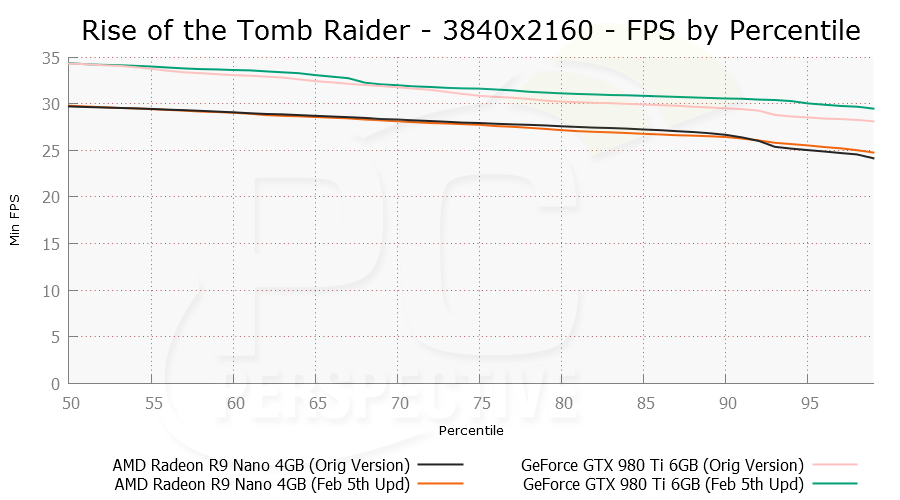 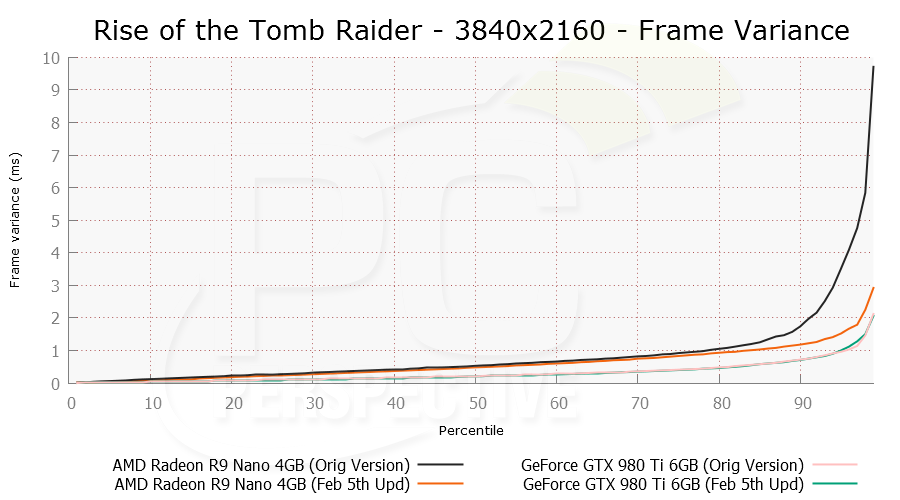 At 4K the results look very similar – performance for both the GTX 980 Ti and the R9 Nano are unchanged from the day one version to the February 5th update. The only significant change is the loss of the hitches in the R9 Nano results, bringing the 95th percentile frame time down to 1.5ms from ~4ms. 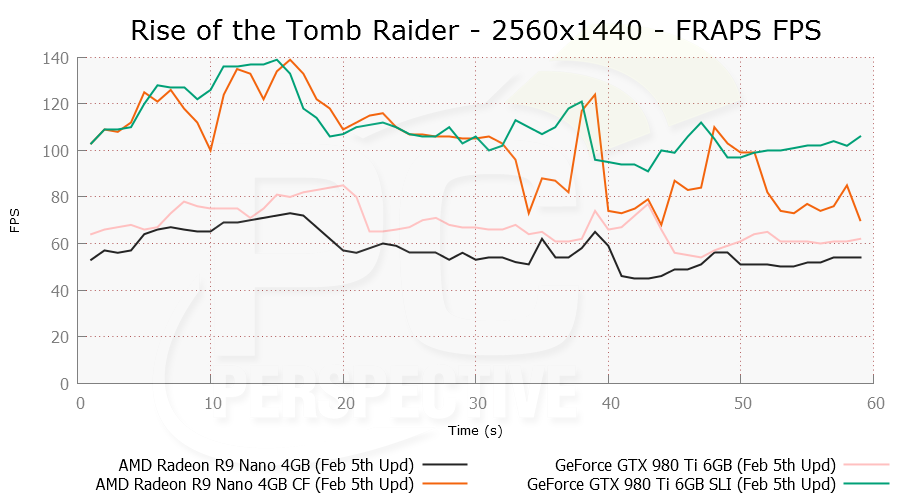 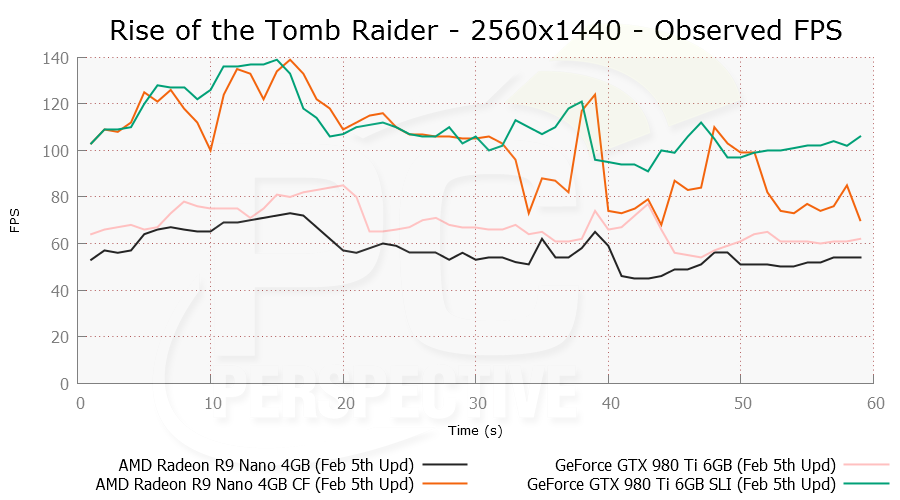 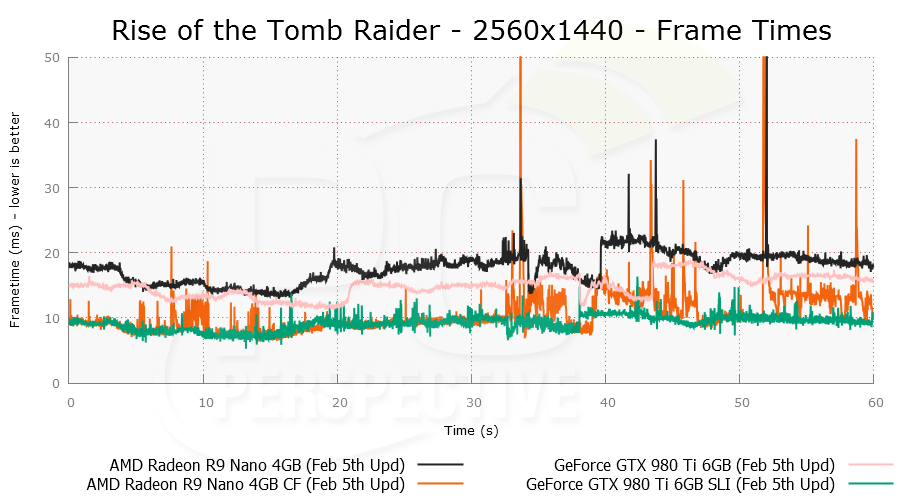 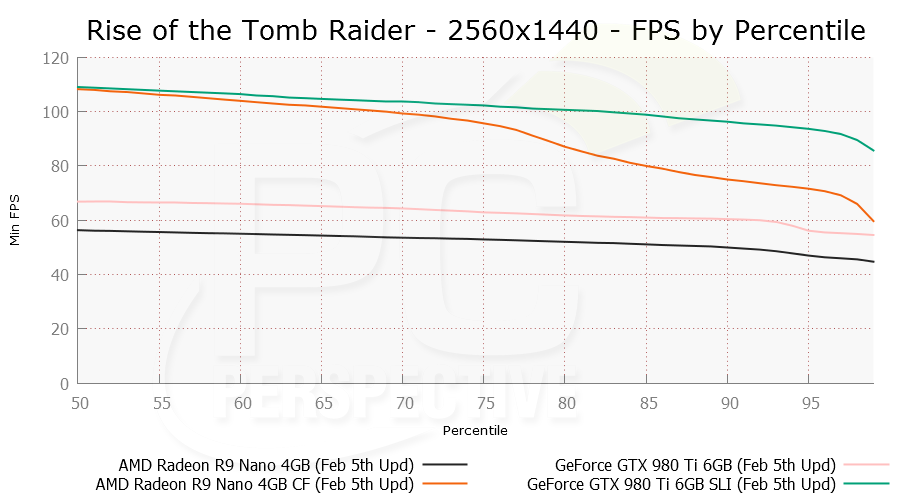 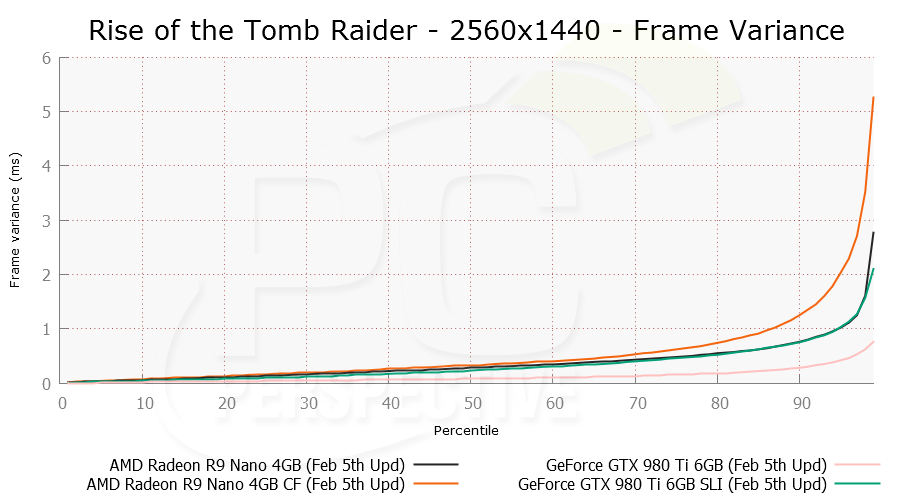 Both AMD and NVIDIA hardware see some decent scaling. The pair of Radeon R9 Nano cards in CrossFire scale up by 89%, going from 58 FPS to 110 FPS. On the NVIDIA side, performance jumps from 67 FPS to 110 FPS, a scaling rate of about 65%. The R9 Nano has a better average frame rate scaling percentage, but looking at the frame time graph there are clearly more frame time consistency concerns. Starting at the 34s mark you can see some added stutter and hitching to the game play that definitely shows up while playing the game. 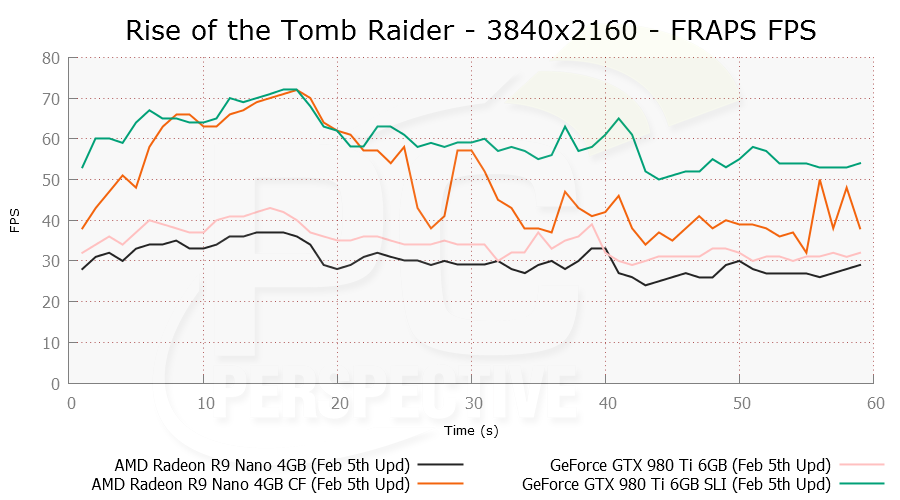 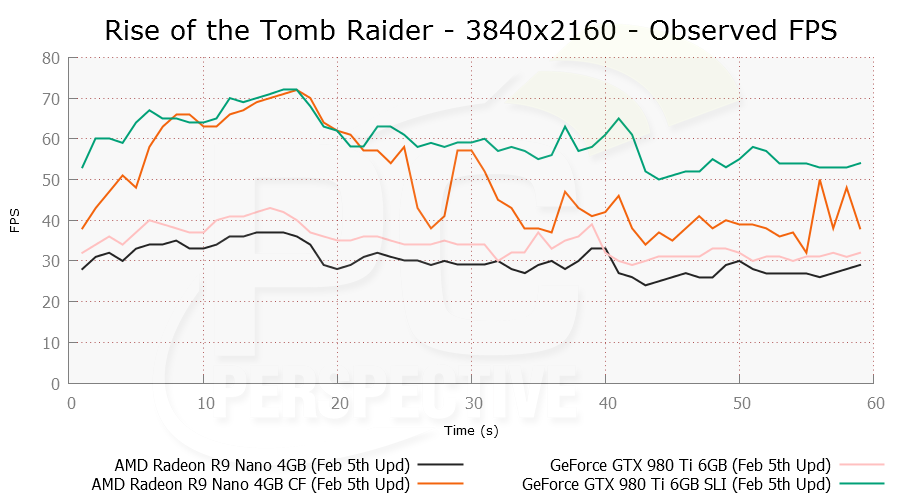 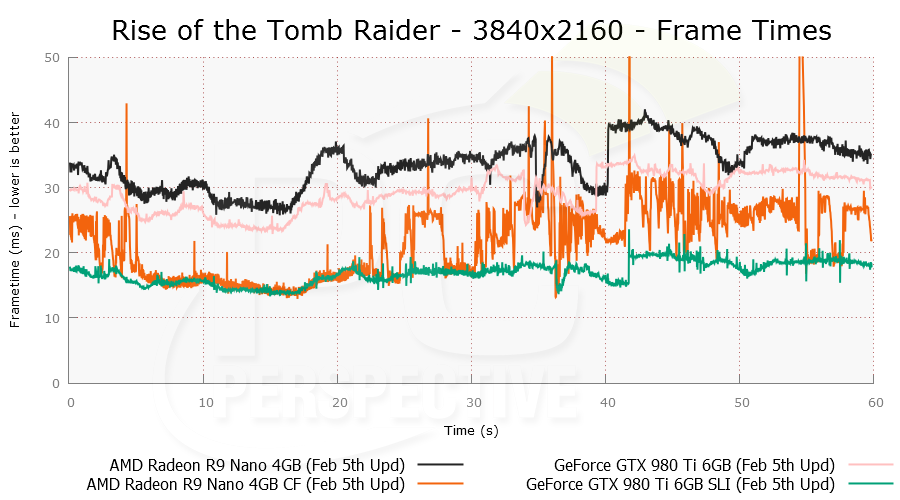 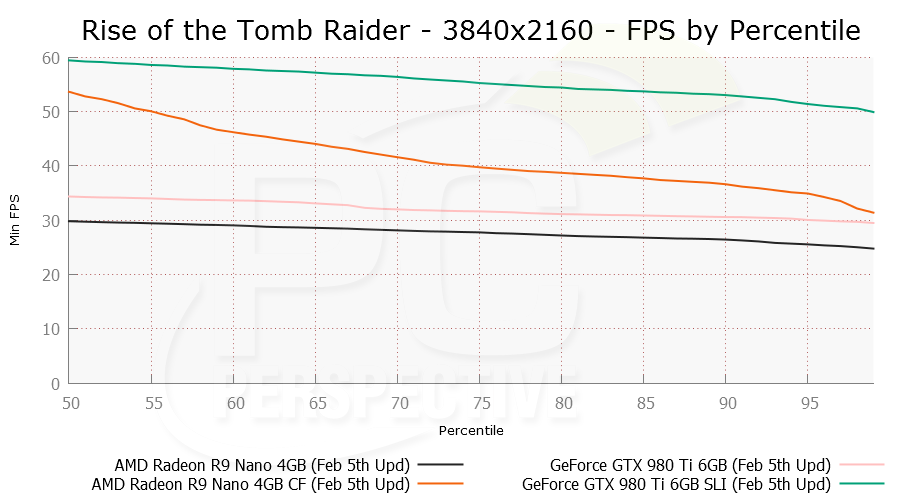 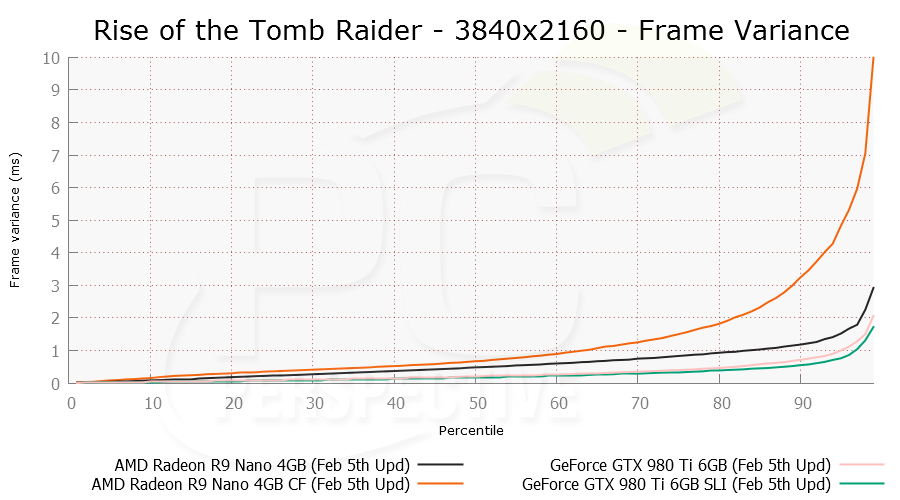 When we jump up to the 4K resolution testing, scaling shifts. The GTX 980 Ti goes from an average of 35 FPS to 60 FPS, a 71% improvement! The R9 Nanos in CrossFire hit 55 FPS on average, up from 30 FPS with a single card, a difference of 83%. But again, the R9 Nano cards in CrossFire are showing significant smoothness issues, consistently, in the second half of our testing scenario.

So there you have it, a quick update with the new version of Rise of the Tomb Raider, a new AMD driver and some added multi-GPU testing. While I am glad to see some new options being tossed into the mix for RoTR to improve image quality, it doesn't look like performance on the NVIDIA side of things shifts much. For AMD users, you'll be glad to see that most of the hitching in frame times has been reduced, either due to the driver, updated game, or both. Multi-GPU scaling works for both NVIDIA and AMD and even though the scaling percentage is higher on the AMD platform, it's clear that NVIDIA's GeForce GTX 980 Ti offers a significantly better dual-GPU experience.