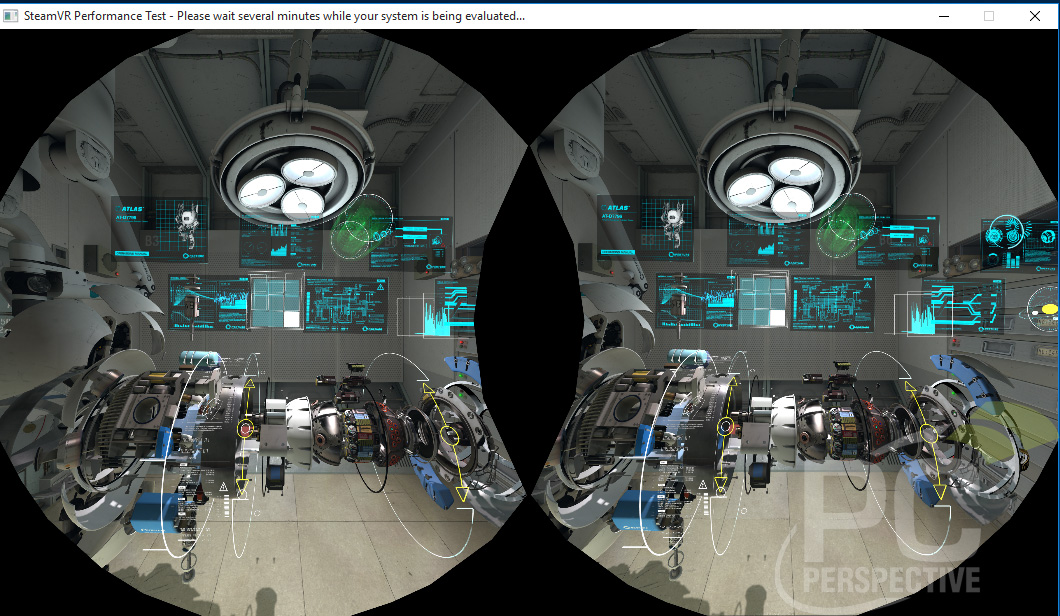 Though I am away from my stacks of hardware at the office attending Mobile World Congress in Barcelona, Valve dropped a bomb on us today in the form of a new hardware performance test that gamers can use to determine if they are ready for the SteamVR revolution. The aptly named "SteamVR Performance Test" is a free title available through Steam that any user can download and run to get a report card on their installed hardware. No VR headset required!

And unlike the Oculus Compatibility Checker, the application from Valve runs actual game content to measure your system. Oculus' app only looks at the hardware on your system for certification, not taking into account the performance of your system in any way. (Overclockers and users with Ivy Bridge Core i7 processors have been reporting failed results on the Oculus test for some time.)

The SteamVR Performance Test runs a set of scenes from the Aperture Science Robot Repair demo, an experience developed directly for the HTC Vive and one that I was able to run through during CES last month. Valve is using a very interesting new feature called "dynamic fidelity" that adjusts image quality of the game in a way to avoid dropped frames and frame rates under 90 FPS in order to maintain a smooth and comfortable experience for the VR user. Though it is the first time I have seen it used, it sounds similar to what John Carmack did with the id Tech 5 engine, attempting to balance performance on hardware while maintaining a targeted frame rate.

The technology could be a perfect match for VR content where frame rates above or at the 90 FPS target are more important than visual fidelity (in nearly all cases). I am curious to see how Valve may or may not pursue and push this technology in its own games and for the Vive / Rift in general. I have some questions pending with them, so we'll see what they come back with. 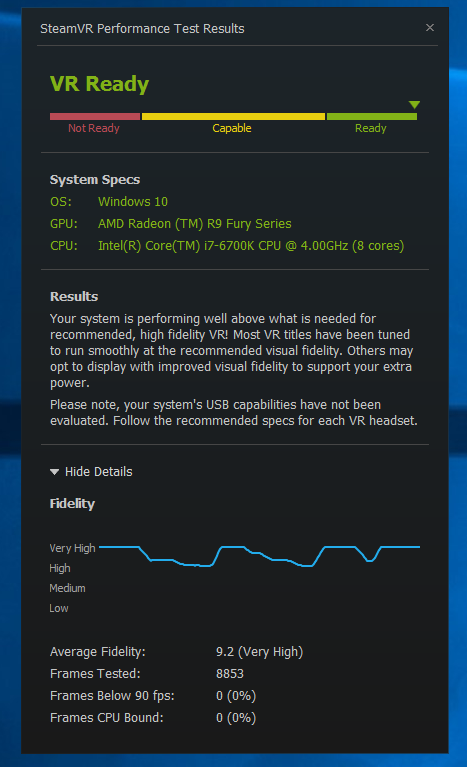 A result for a Radeon R9 Fury provided by AMD

Valve's test offers a very simple three tiered breakdown for your system: Not Ready, Capable and Ready. For a more detailed explanation you can expand on the data to see metrics like the number of frames you are CPU bound on, frames below the very important 90 FPS mark and how many frames were tested in the run. The Average Fidelity metric is the number that we are reporting below and essentially tells us "how much quality" the test estimates you can run at while maintaining that 90 FPS mark. What else that fidelity result means is still unknown – but again we are trying to find out. The short answer is that the higher that number goes, the better off you are, and the more demanding game content you'll be able to run at acceptable performance levels. At least, according to Valve. 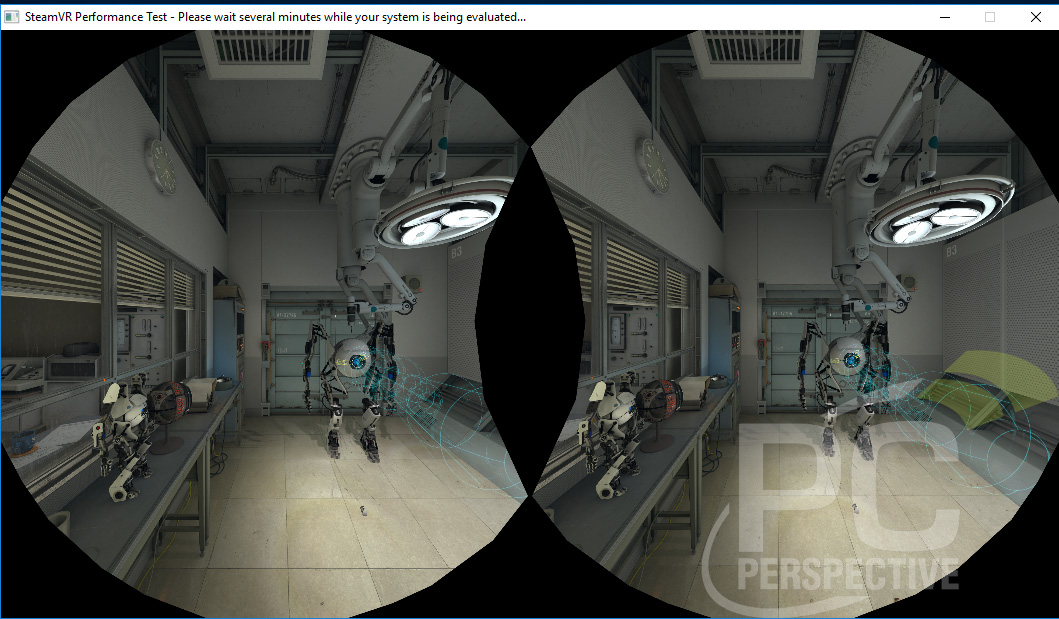 Because I am not at the office to run my own tests, I decided to write up this story using results from a third part. That third party is AMD – let the complaining begin. Obviously this does NOT count as independent testing but, in truth, it would be hard to cheat on these results unless you go WAY out of your way to change control panel settings, etc. The demo is self run and AMD detailed the hardware and drivers used in the results.

These results were provided by AMD in an email to the media. Take that for what you will until we can run our own tests.

First, the GeForce GTX 980 Ti is the highest performing single GPU tested, with a score of 11 – because of course it goes to 11. The same score is reported on the multi-GPU configuration with two Radeon R9 Nanos so clearly we are seeing a ceiling of this version of the SteamVR Performance Test. With a single GPU score of 9.2, that is only a 19% scaling rate, but I think we are limited by the test in this case. Either way, it's great news to see that AMD has affinity multi-GPU up and running, utilizing one GPU for each eye's rendering. (AMD pointed out that users that want to test the multi-GPU implementation will need to add the -multigpu launch option.) I still need to confirm if GeForce cards scale accordingly. UPDATE: Ken at the office ran a quick check with a pair of GeForce GTX 970 cards with the same -multigpu option and saw no scaling improvements. It appears NVIDIA has work to do here.

Moving down the stack, its clear why AMD was so excited to send out these early results. The R9 Fury X and R9 Fury both come out ahead of the GeForce GTX 980 while the R9 Nano, R9 390X and R9 390 result in better scores than NVIDIA's GeForce GTX 970. This comes as no surprise – AMD's Radeon parts tend to offer better performance per dollar when it comes to benchmarks and many games. 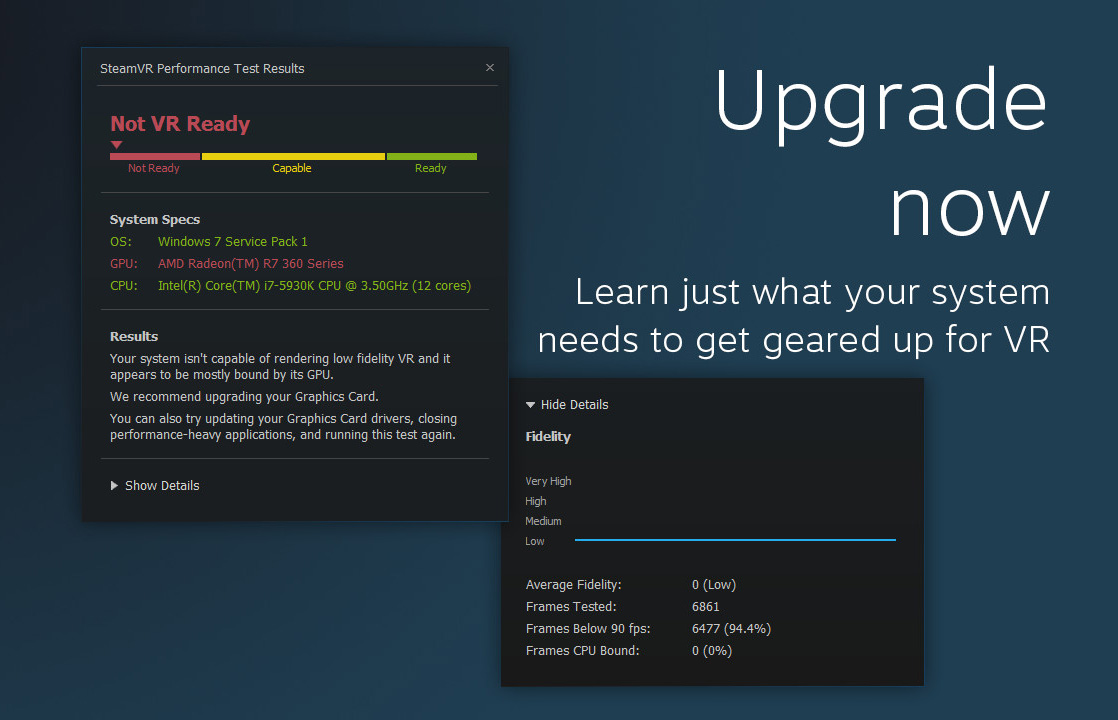 There is obviously a lot more to consider than the results this SteamVR Performance Test provides when picking hardware for a VR system, but we are glad to see Valve out in front of the many, many questions that are flooding forums across the web. Is your system ready??