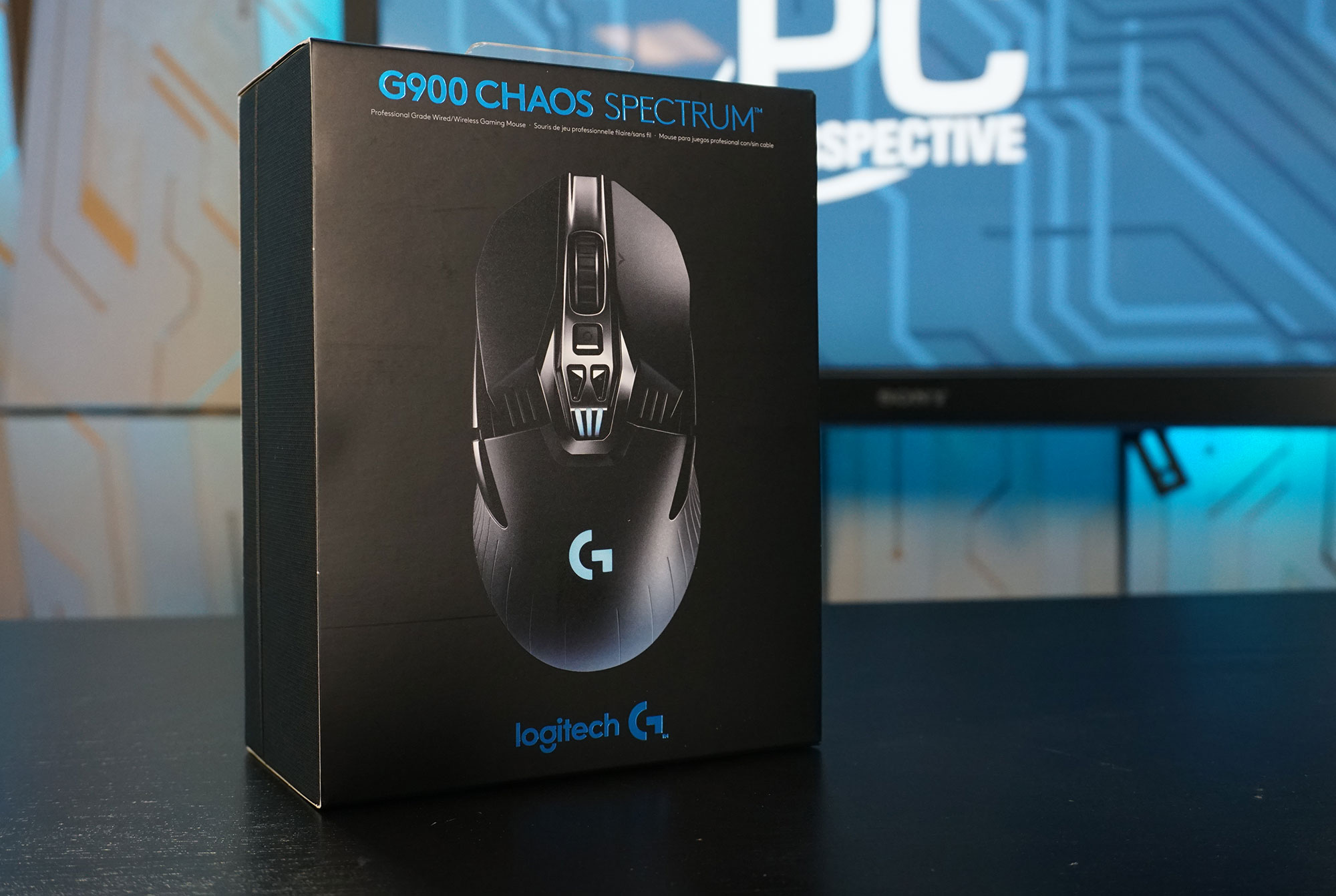 While attending GDC last week and catching up on the world of VR that will be in our laps this spring and summer, I spent some time with Logitech to learn about the company's latest in gaming hardware. We already told you about the G610 keyboards using Cherry keyswitches but today Logitech is revealing a brand new wireless gaming mouse. 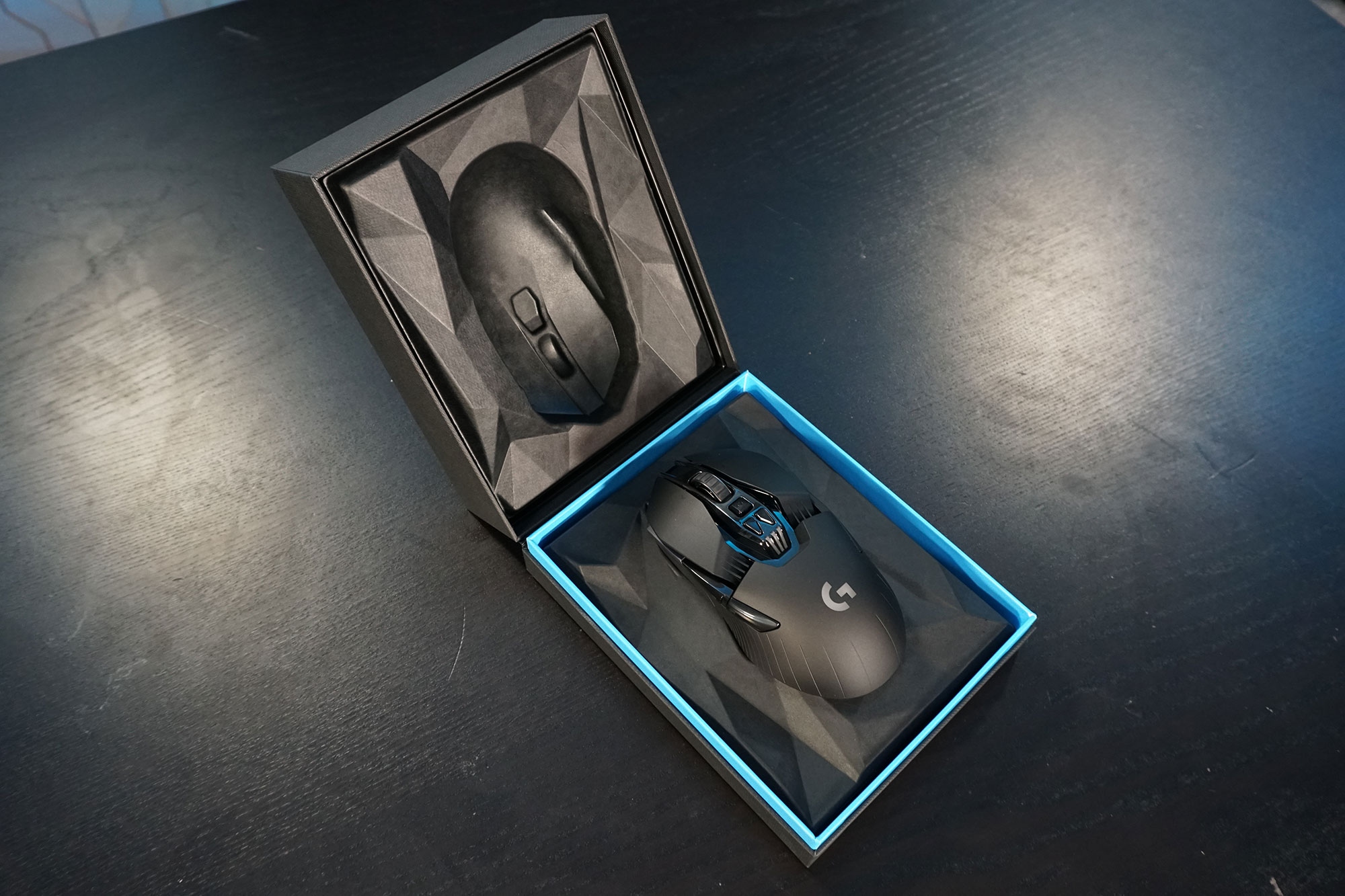 First, I know that a lot of gamers, both those in the professional spaces and those that strive to that level of competition, are going to have concerns about this being a wireless mouse. Logitech believes and has convincing evidence that they have built the best and fastest wireless implementation of any option on the market today. I'll go over some of their testing below, but first let's dive into the mouse itself. 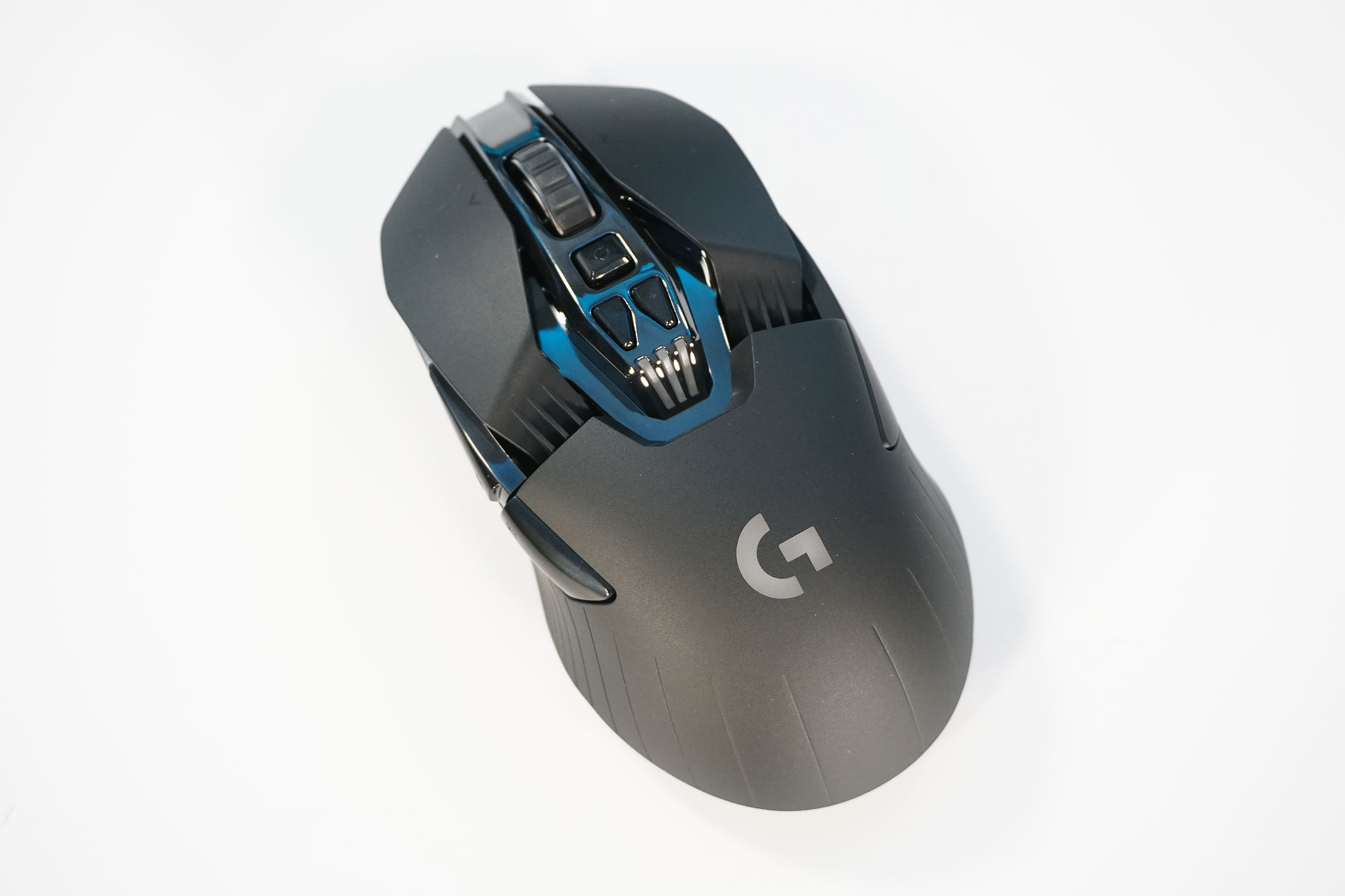 Much to the delight of left handed users and anyone looking for a ambidextrous mouse, the G900 Chaos Spectrum is built for you! The design is balanced on both sides and even has a unique button configuration to permit thumb use for both lefties and righties. I have been mousing with it for the last three days, and as a right handed user, am completely comfortable with the design. As the name implies, the G logo on the mouse is completely controllable with RGB LEDs through the Logitech Gaming Software suite. 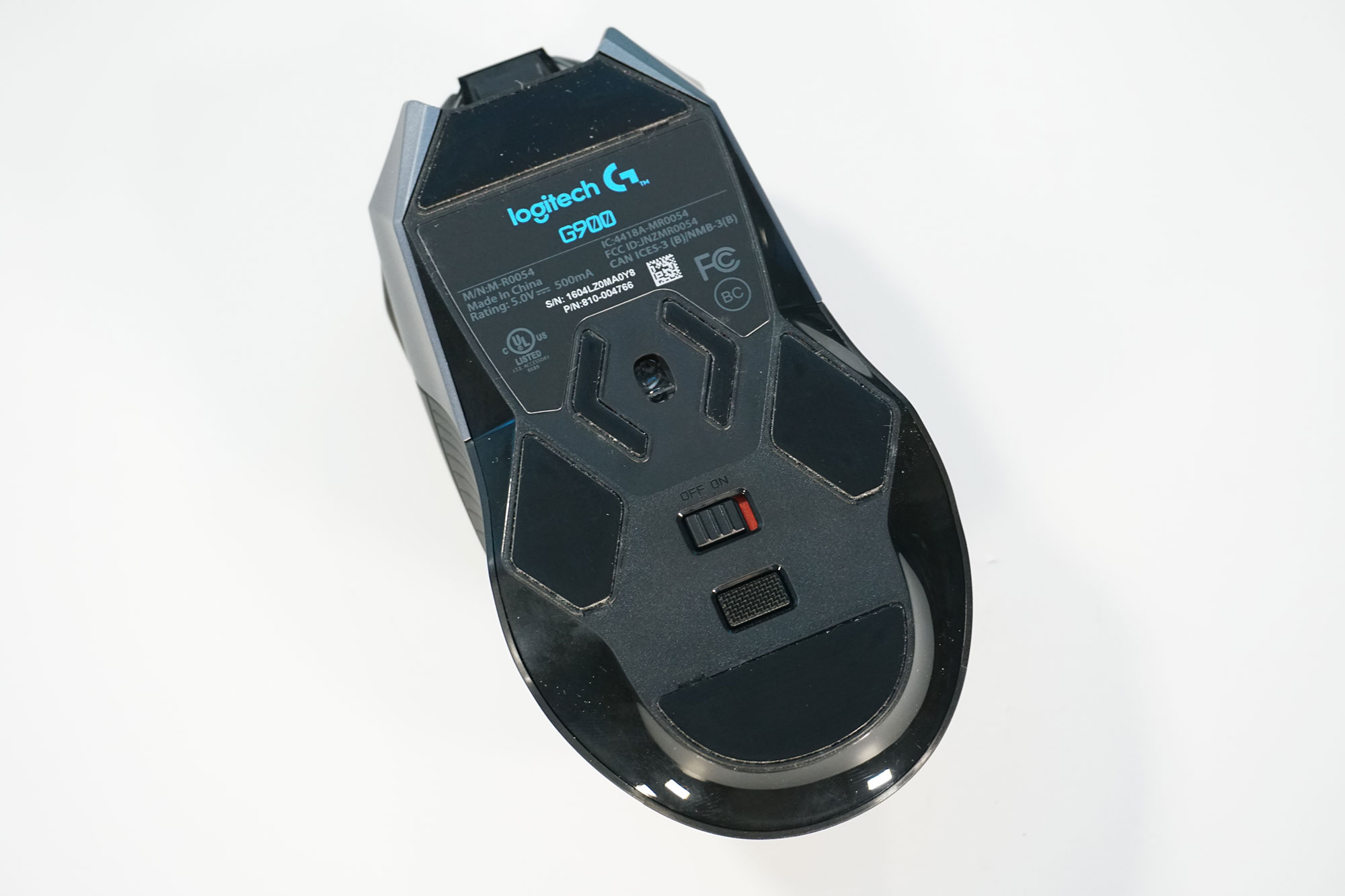 On the bottom of the G900 you'll find the on/off switch and sync button. Logitech tells us that you will be able to get at least 24 hours of continuous use out of a single charge of the mouse, 32 hours if you turn off lighting, and charge time is going to be around 2 hours. That's actually very good battery life for a high performance sensor like the PMW3366! 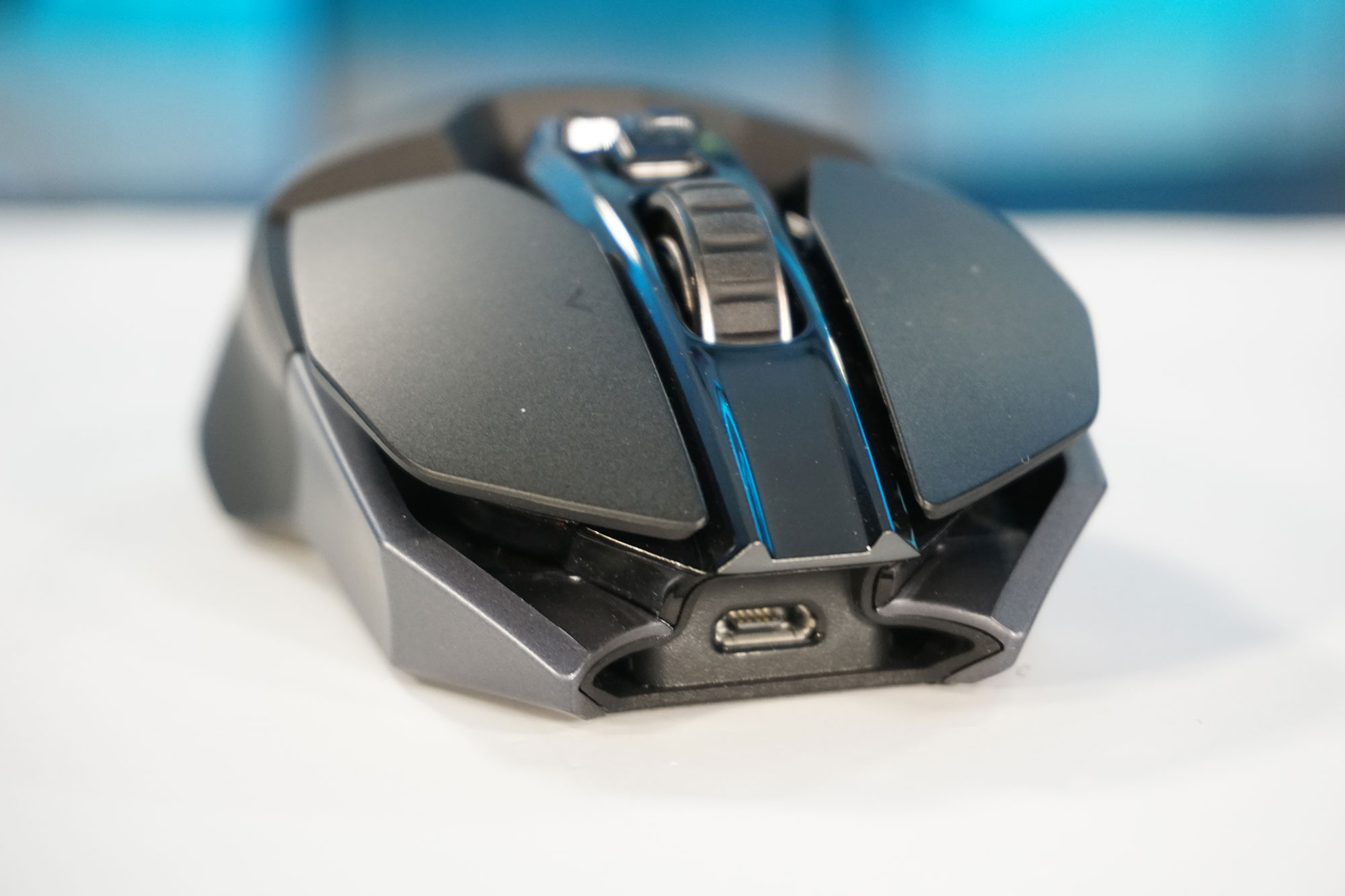 On the front is a micro USB port used for charging, which I'll touch on in a minute. The buttons on the G900 are unique as well, using a new mechanical pivot button design. Logitech claims they were built for "crisp, clean clicks". With the pivot point moved back towards the center of the mouse, engineers were able to reduce the travel distances between the buttons and switches and keep the amount of force required for the click to a minimum.

The scroll wheel supports both notched and free spin and is very responsive…he says as he accidentally scrolls down his page while attempting to write this story. 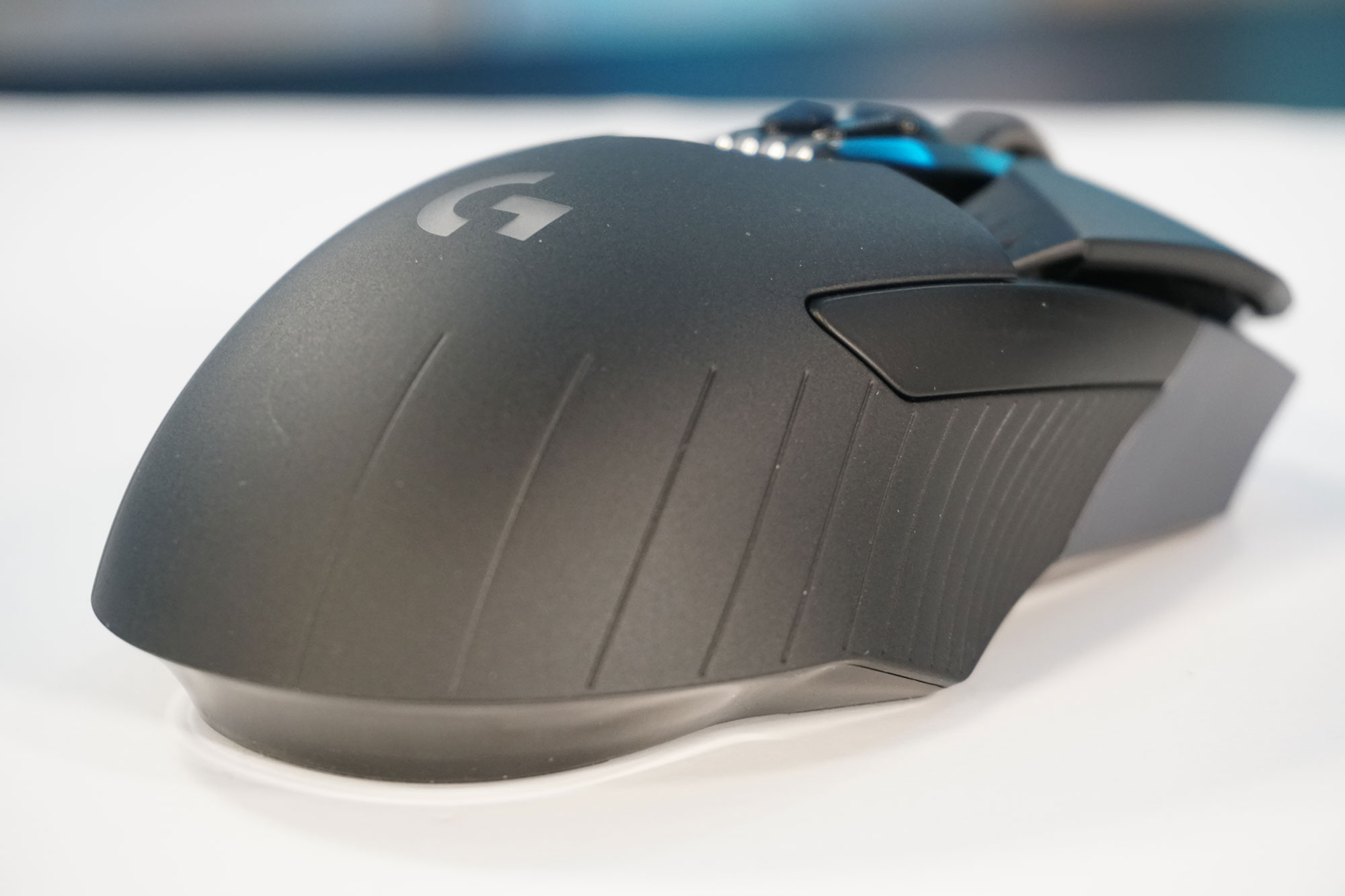 Along the back of the mouse you find an ample rear end capable of supporting your palm for long, comfortable gaming sessions. 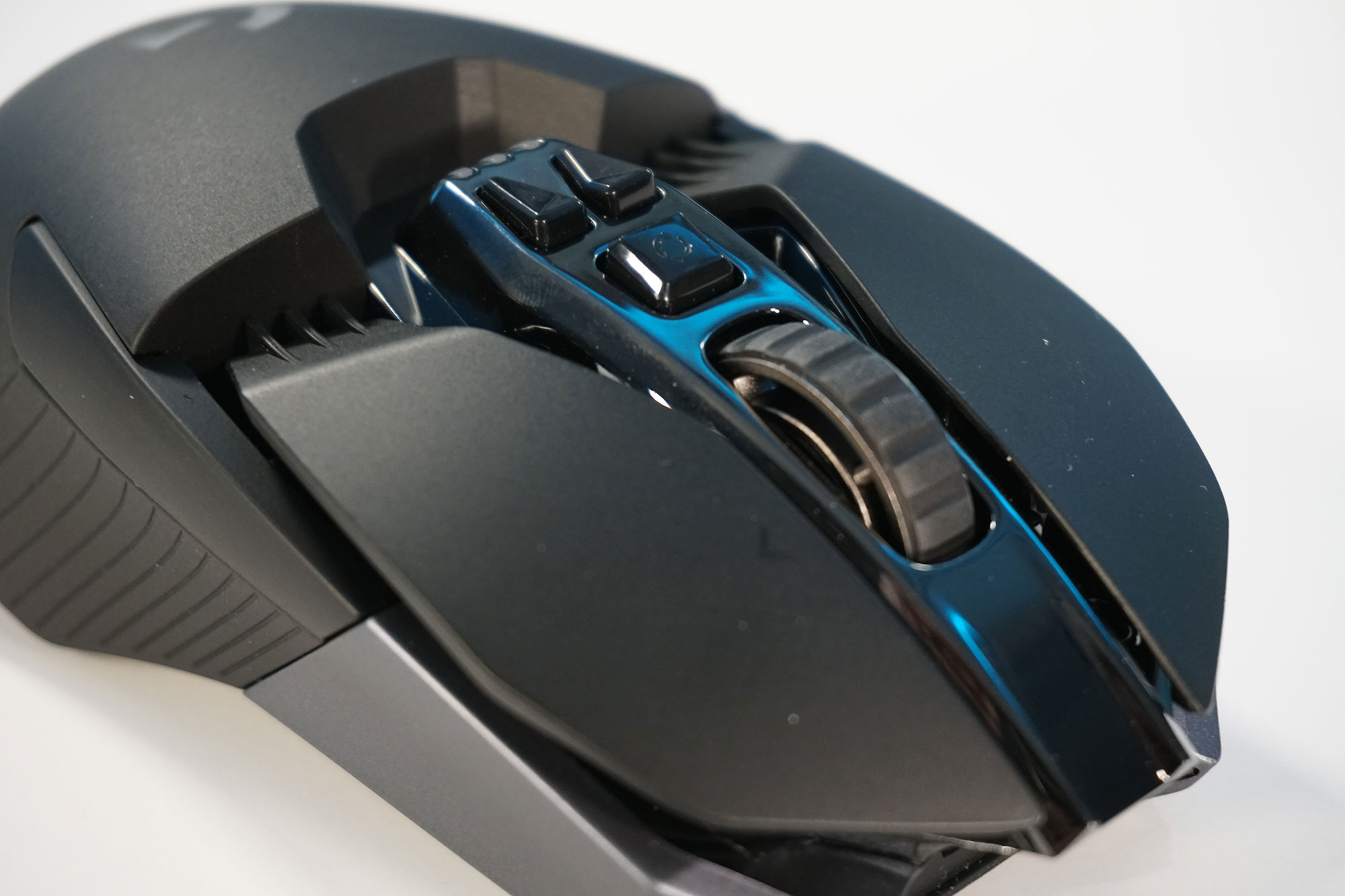 The two buttons behind the scroll wheel and its accompanying speed switch set the DPI of the mouse on demand, with a set of three LEDs to indicate which setting you are on currently. 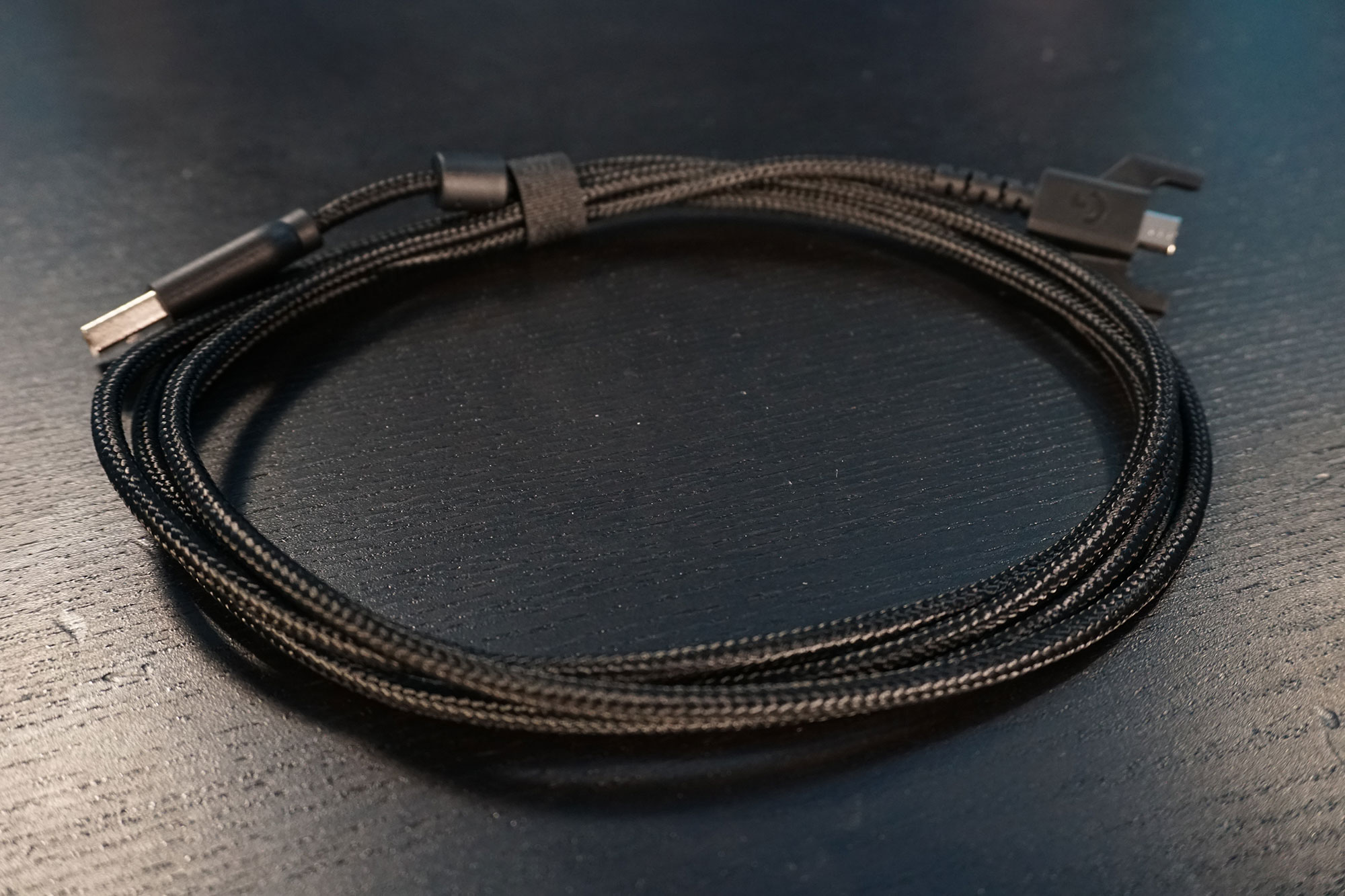 In the box with the G900 comes a set of interesting accessories, the first of which is a lengthy USB cable to go from your PC to your desk. It serves two purposes – it allows you to move the wireless receiver to your desk, closer to the mouse, but also allows you to plug the mouse in when the battery gets low. 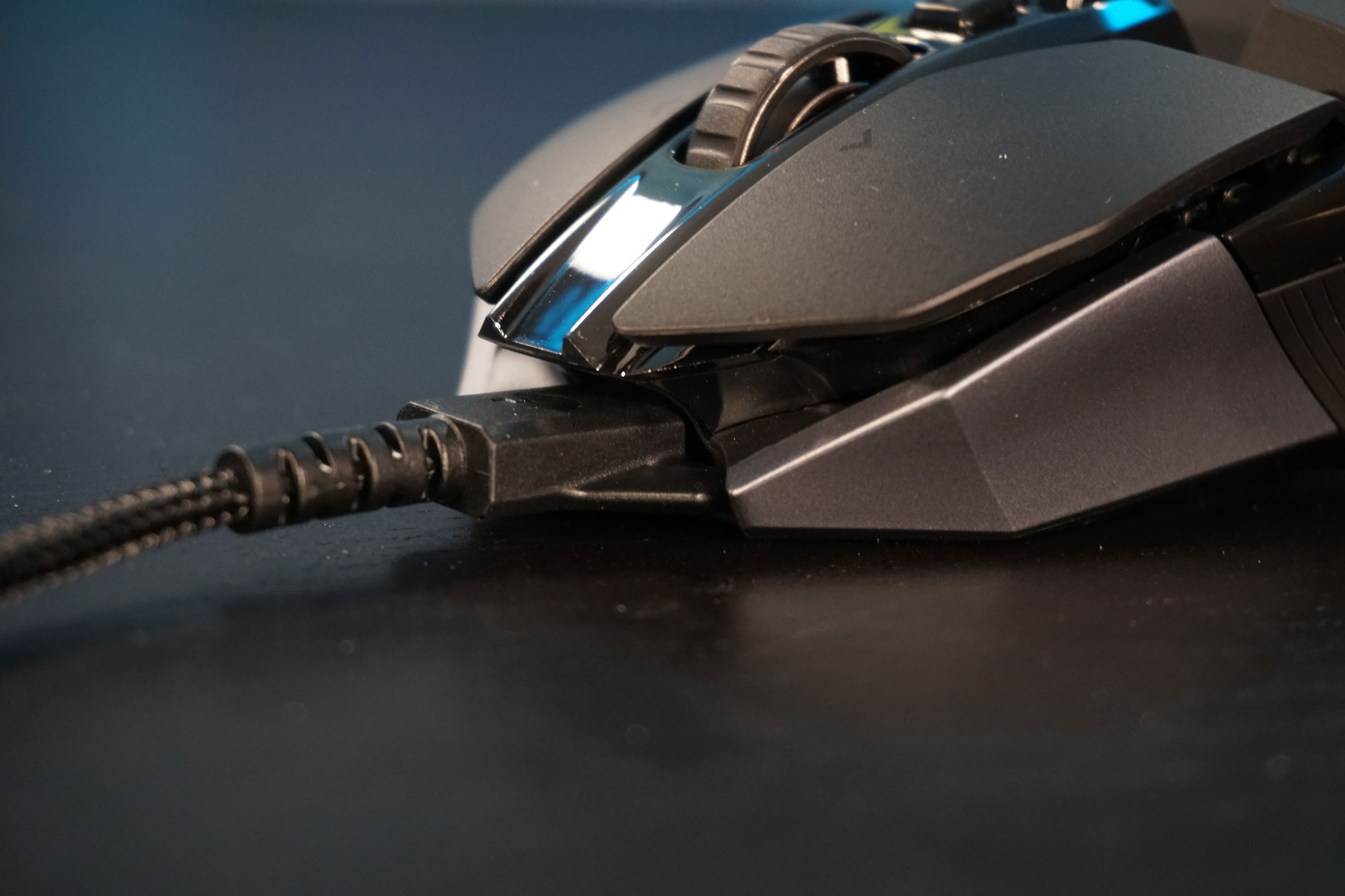 The arms on either side of the micro USB connector make this cable useless for most other devices but help guide and give support to the connection to the G900. This relieves stress on the connector when using the mouse while plugged in.

Speaking of that – when you plug it in, it actually becomes a wired mouse, showing up to the system as such. The LGS suite recognizes it immediately, applies the same embedded macros and settings, and you're off and gaming again within a couple of seconds. 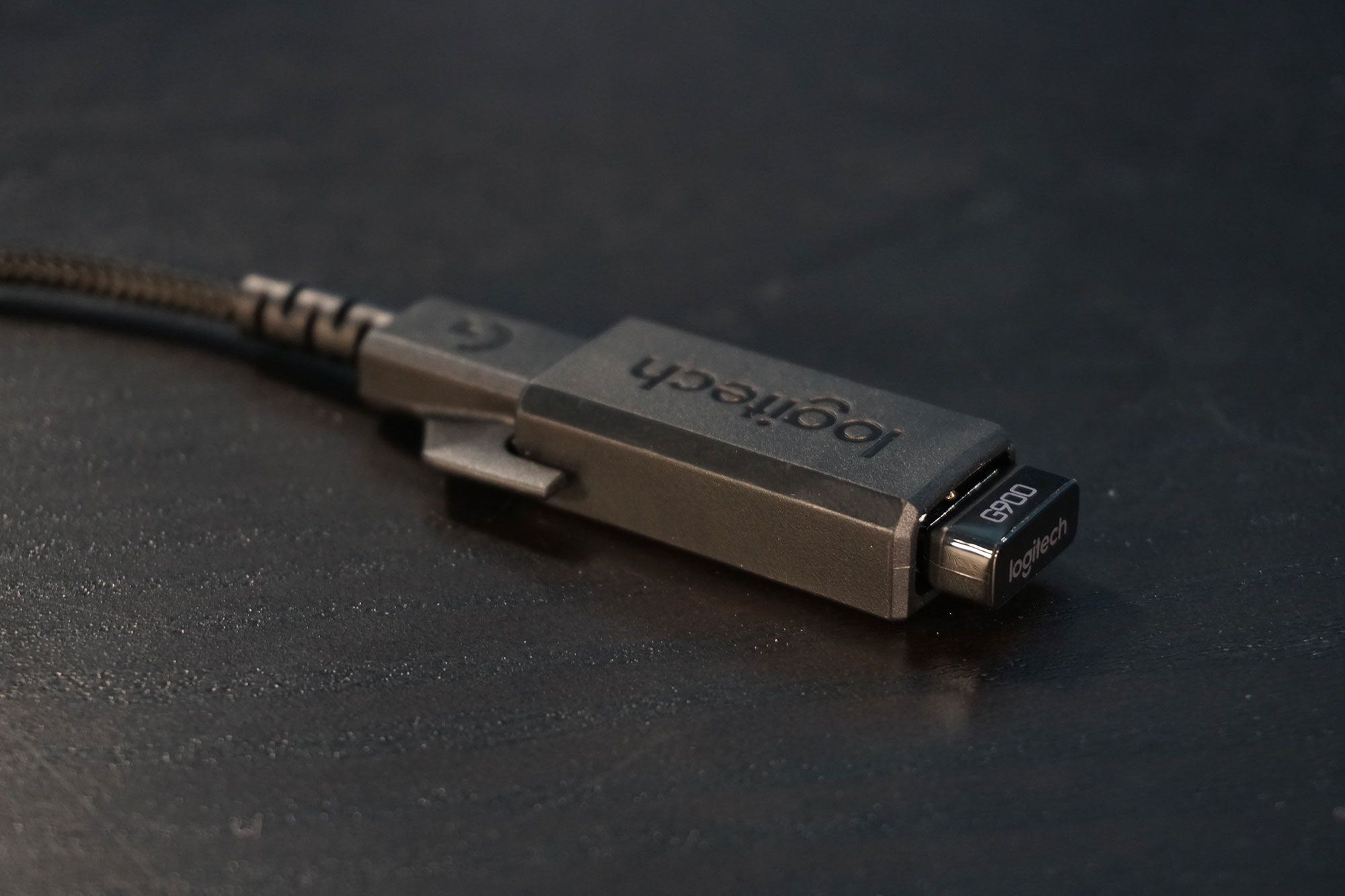 Logitech includes a micro USB to full size USB adapter in the box as well, allowing you to plug in your G900 wireless receiver to the cable on the top of your desk when running in wireless mode. If the battery gets low you just disconnect the adapter and wireless dongle and plug that cable into your mouse – done. 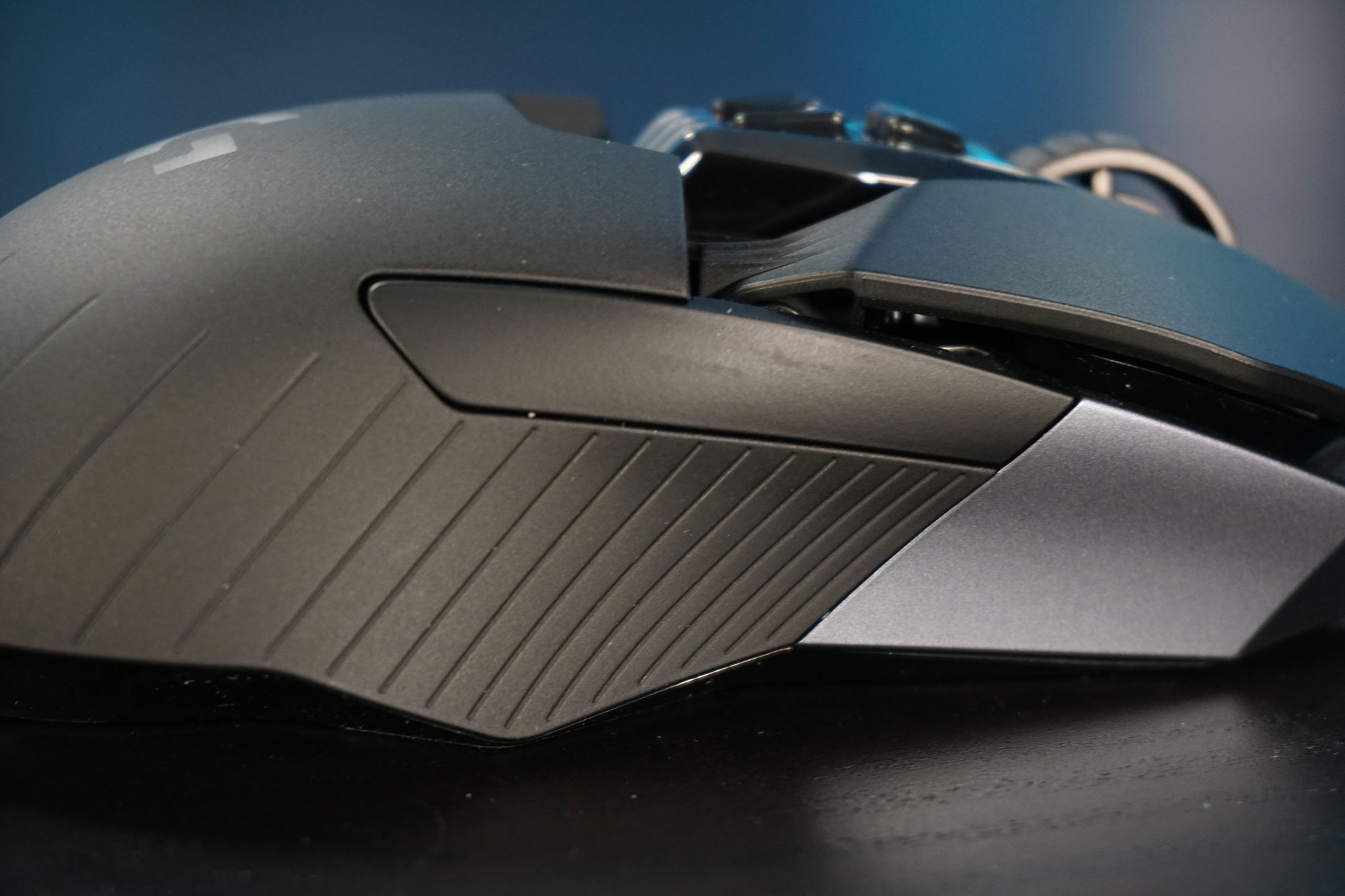 Another interesting feature to aid in the ambidextrous nature of the G900 is the ability to customize either side with buttons…or no buttons. Here you see the right side of my mouse with a plate that makes sure I don't accidentally activate any buttons on that side with my pinky. 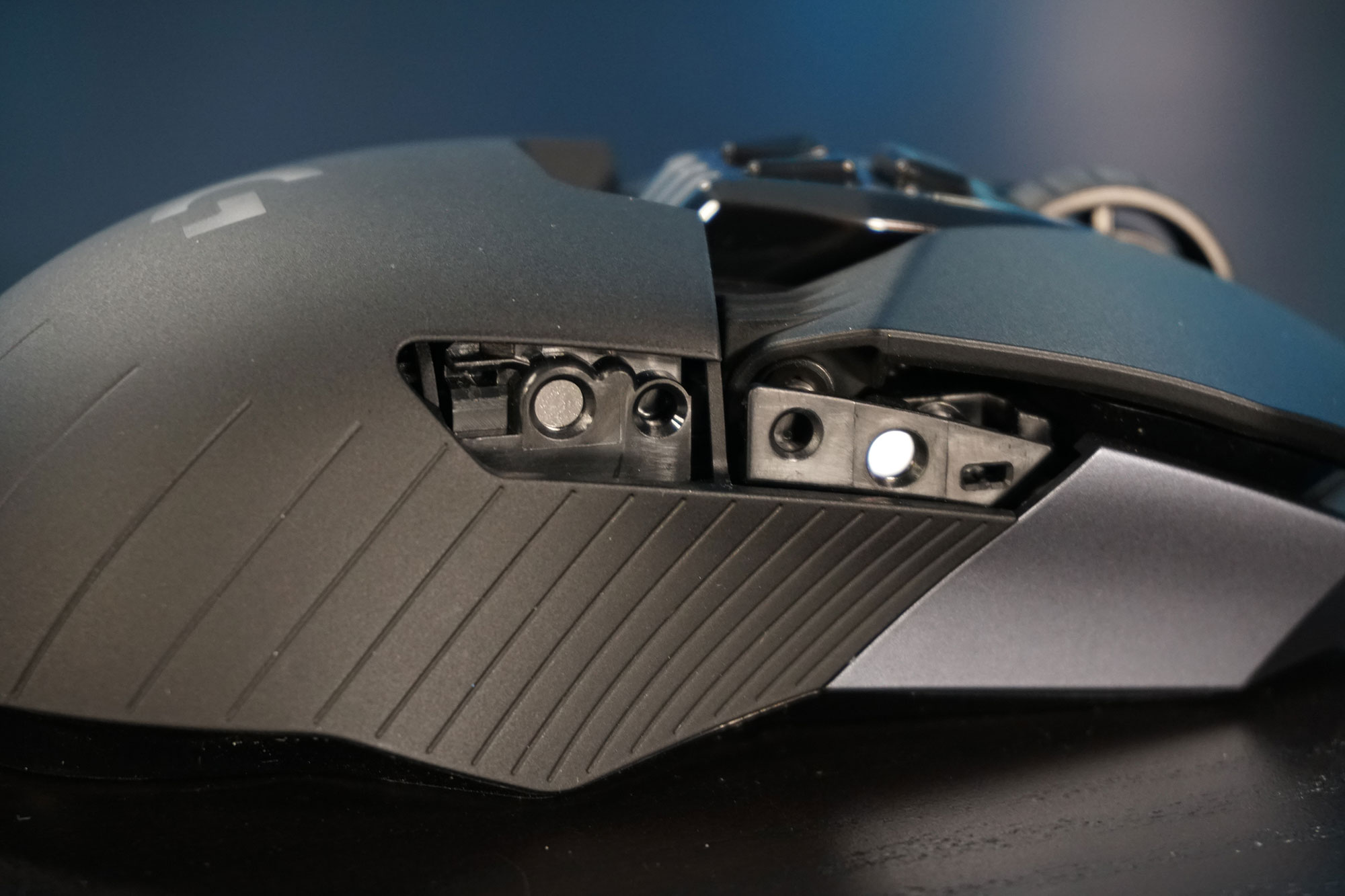 But that cover is removeable, only held in by magnets, showing a pair of switches that can be used. 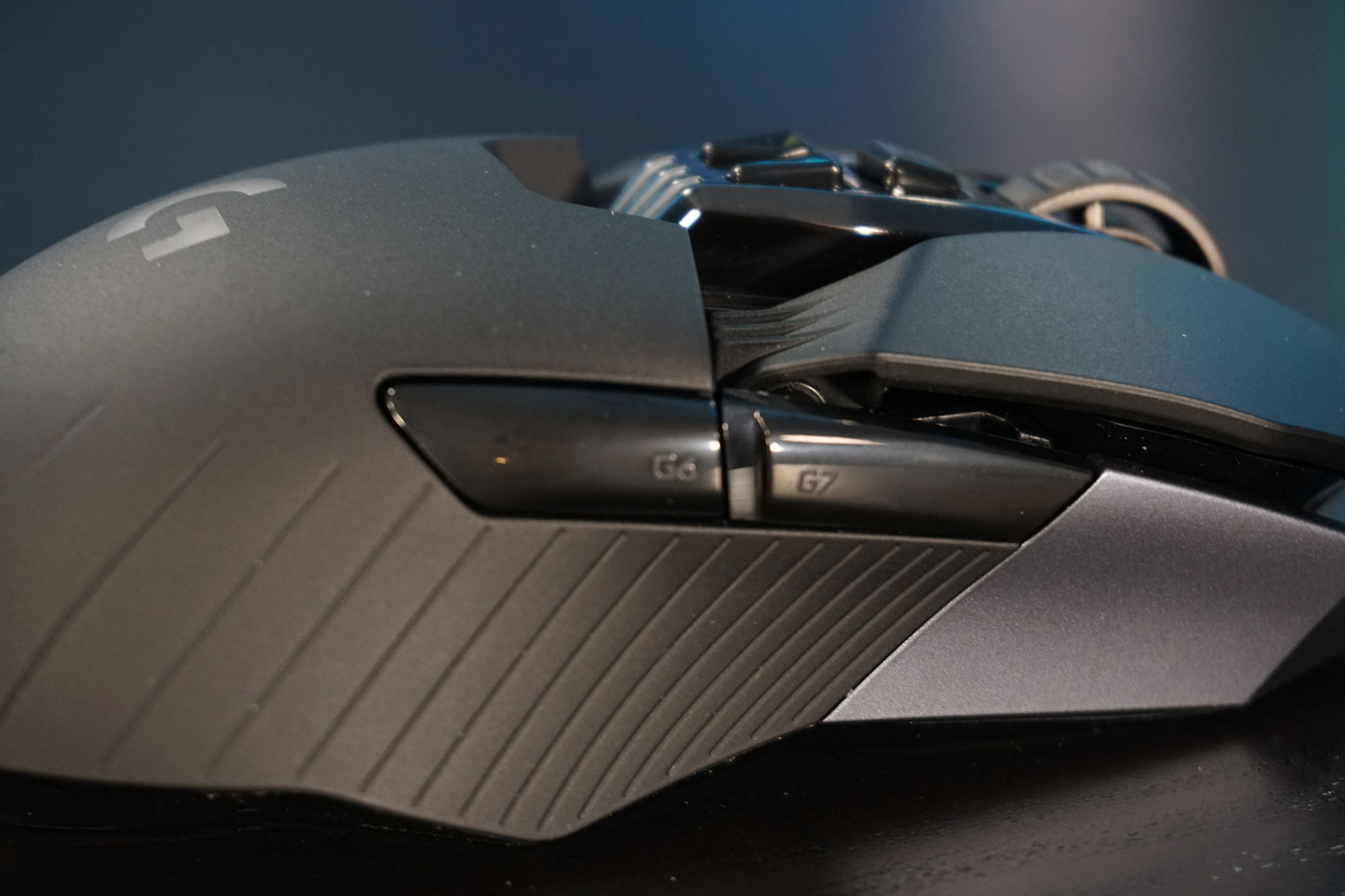 And here I have installed two additional buttons labeled G6 and G7 that I can assign to any function in the LGS that I'd like. Logitech supplies two blank panels and four buttons, so you can choose to have NO side buttons, two or four. It's a pretty great addition for a mouse meant to cater to as many users as possible.

I promised you details on Logitech's claims of the G900 being the best wireless gaming mouse in the industry. Though we didn't do testing on this ourselves, Logitech has gone into great detail with both the competition and the testing methodology which leads me to believe they are prepared for any challenges from outside companies. 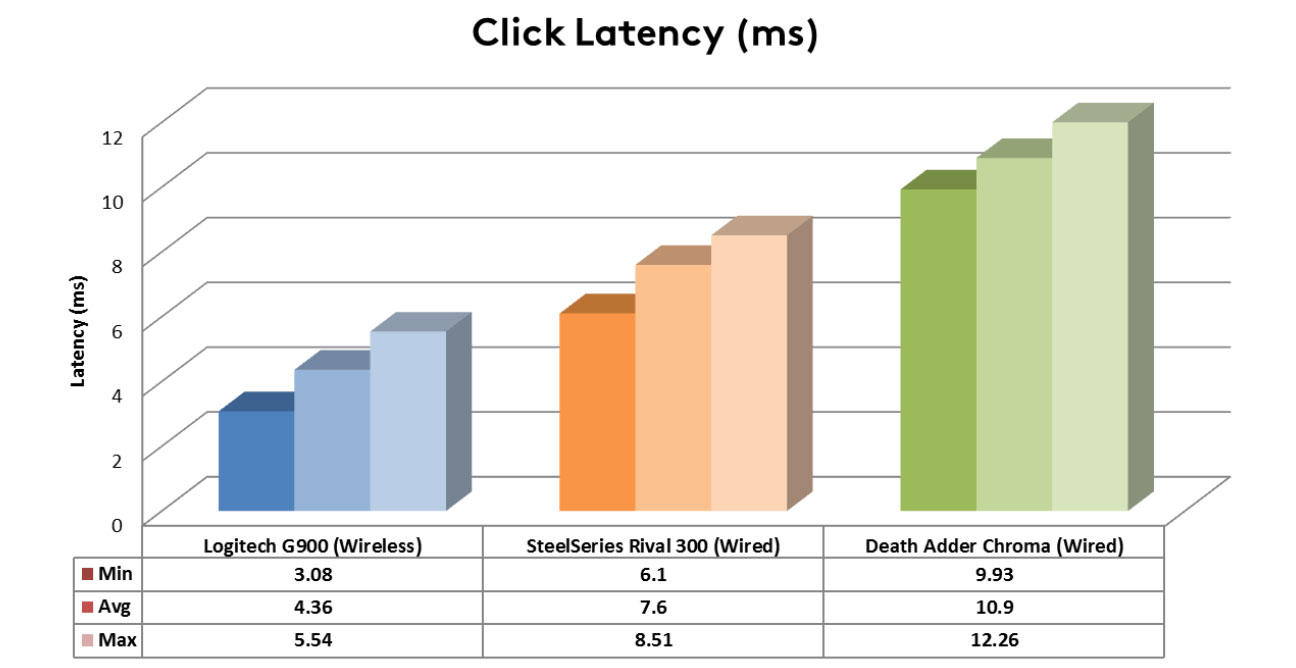 The first claim to bat down: latency. Logitech claims that G900 in its wireless state has an average click latency of just 4.36 ms, which is actually BETTER than the wired latency of mice like the SteelSeries Rival 300 and the Death Adder Chroma. 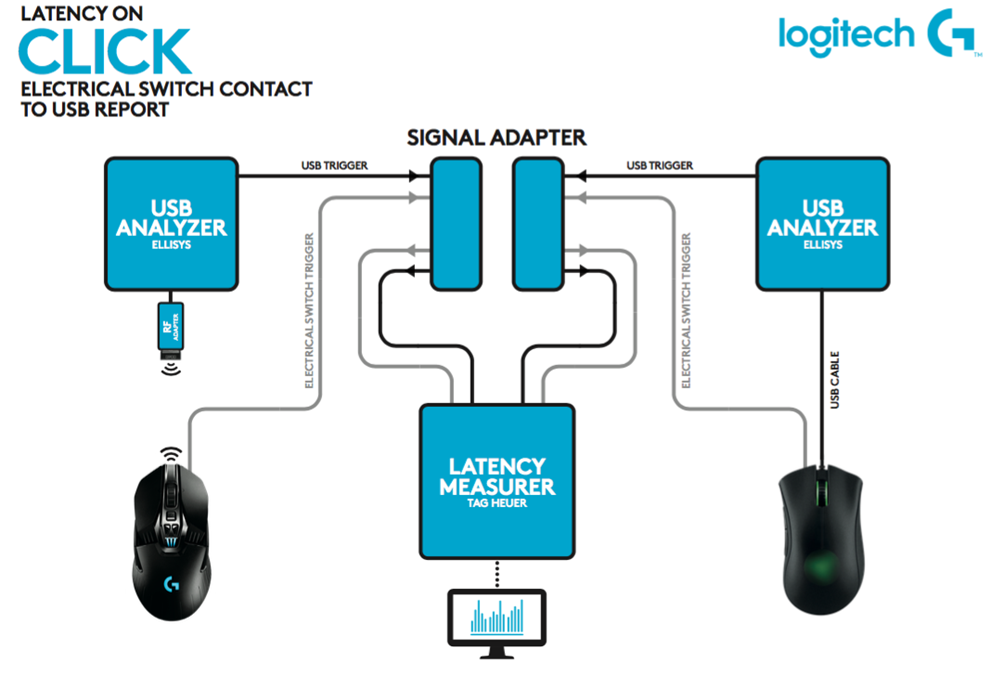 How is that possible? A combination of the controller logic, cycle rates and other parts of the hardware are at work, though Logitech wouldn't give me much more detail. They did tell me all testing was done with only the Windows driver installed, no custom suites from any any parties. 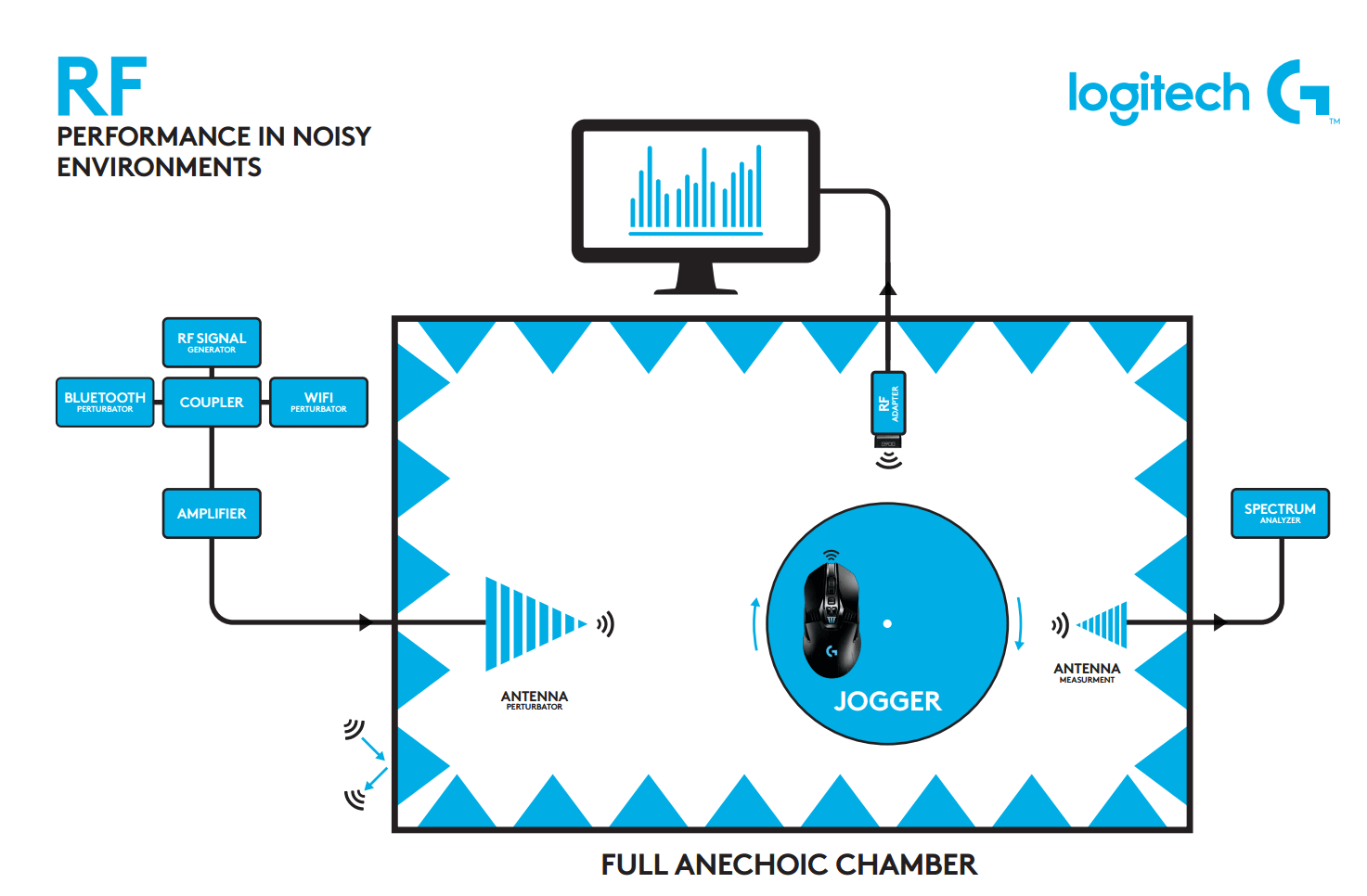 Another test Logitech ran was on RF interference, measuring the accuracy of mouse movements with interference from Bluetooth, Wi-Fi and more. The mice were put on a jogger (think of a mouse wheel but for…mice) and the accuracy was compared. 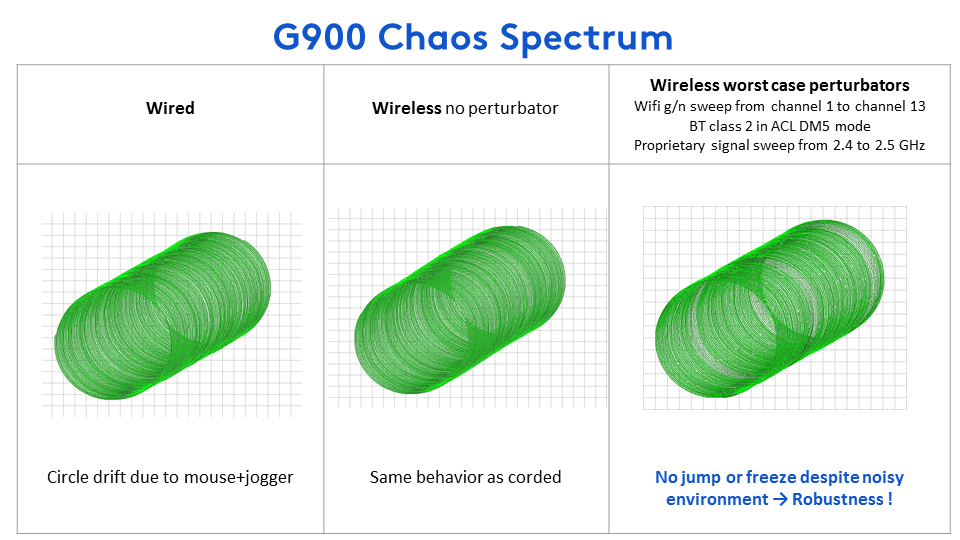 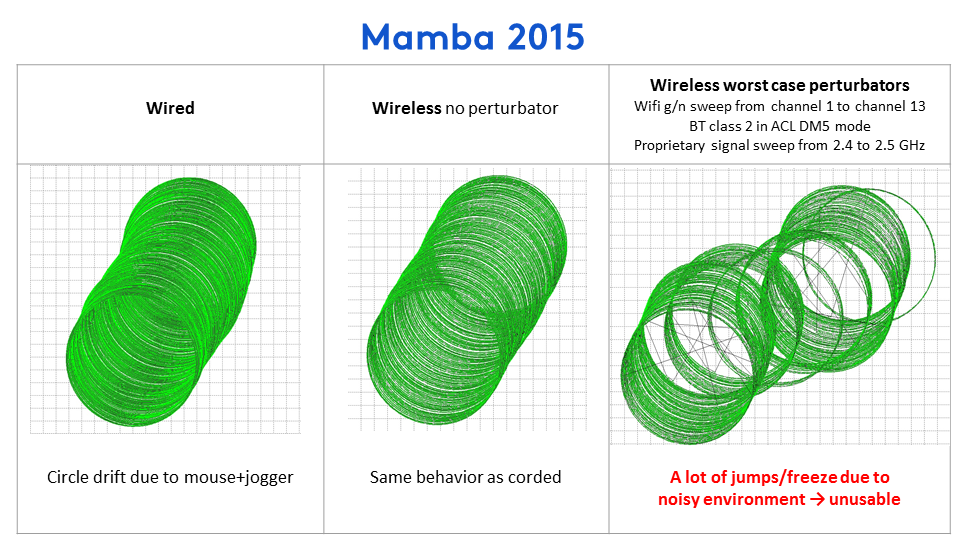 One popular wireless competitor, the Razer Mamba 2015 does well in wired and wireless without interference modes, but once Logitech introduces outside signals that might be created by other devices in vicenity, things go awry.

I have only been able to spend a couple of days with the mouse, but so far I think the G900 lives up to its claims of being the best wireless gaming mouse on the market. It's light, easy to adjust and will offer an ambidextrous option that people have been pining at for some time. 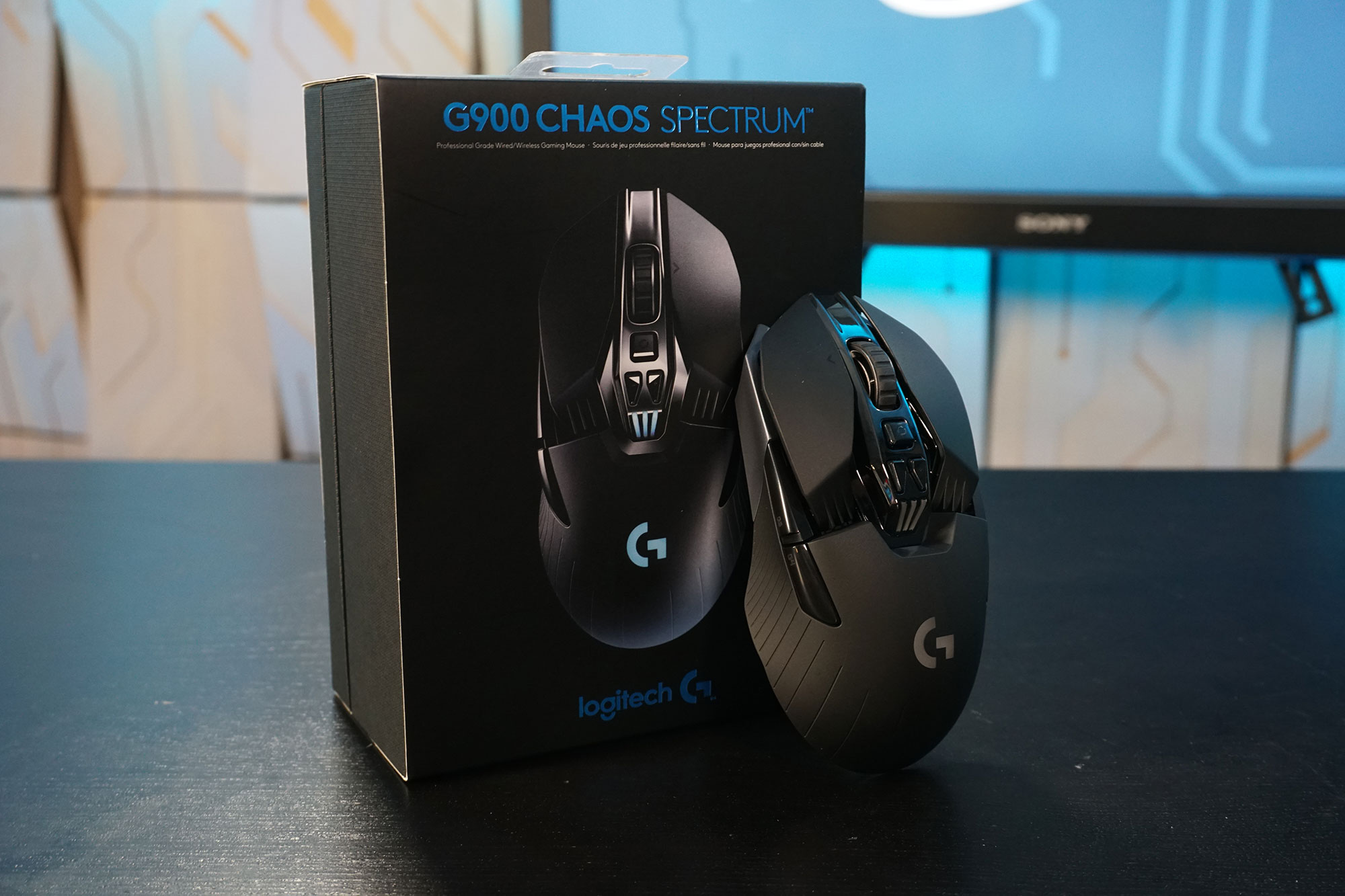 It's not cheap though – the G900 will retail for $149 when it goes on sale next week. That's competitive in the space but definitely not the low end of the spectrum. I plan on spending more time with Logitech's new Chaos Spectrum to come to a more thorough conclusion – stay tuned!

This is not the military sim you are looking for