Final details of the Radeon Pro Duo are finally here, in the form of a leaked slide deck.

This weekend, leaks of information on both WCCFTech and VideoCardz.com have revealed all the information about the pending release of AMD’s dual-GPU giant, the Radeon Pro Duo. While no one at PC Perspective has been briefed on the product officially, all of the interesting data surrounding the product is clearly outlined in the slides on those websites, minus some independent benchmark testing that we are hoping to get to next week. Based on the report from both sites, the Radeon Pro Duo will be released on April 26th.

AMD actually revealed the product and branding for the Radeon Pro Duo back in March, during its live streamed Capsaicin event surrounding GDC. At that point we were given the following information:

The design of the card follows the same industrial design as the reference designs of the Radeon Fury X, and integrates a dual-pump cooler and external fan/radiator to keep both GPUs running cool. 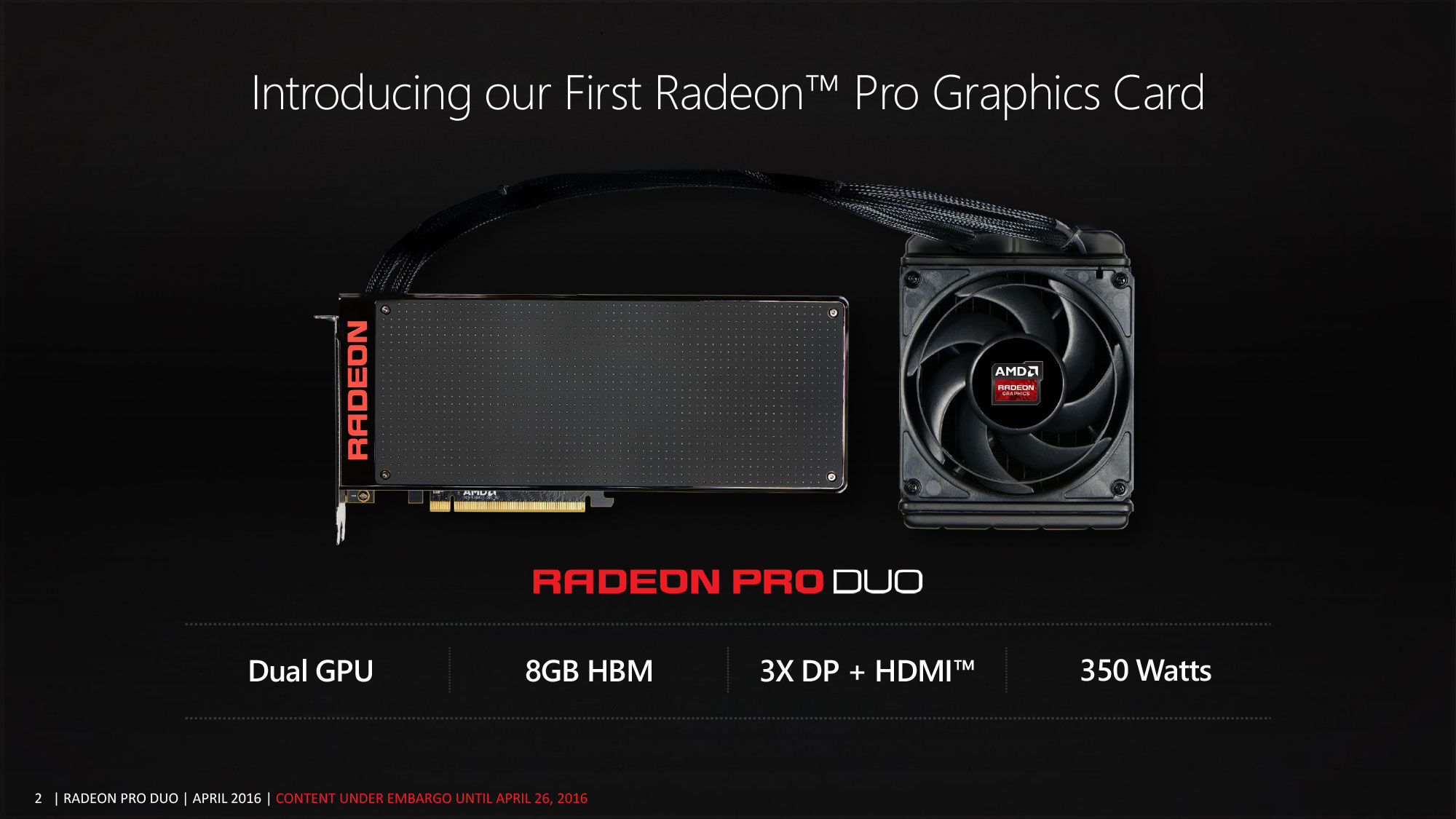 Based on the slides leaked out today, AMD has revised the Radeon Pro Duo design to include a set of three DisplayPort connections and one HDMI port. This was a necessary change as the Oculus Rift requires an HDMI port to work; only the HTC Vive has built in support for a DisplayPort connection and even in that case you would need a full-size to mini-DisplayPort cable.

The 8GB of HBM (high bandwidth memory) on the card is split between the two Fiji XT GPUs on the card, just like other multi-GPU options on the market. The 350 watts power draw mark is exceptionally high, exceeded only by AMD’s previous dual-GPU beast, the Radeon 295X2 that used 500+ watts and the NVIDIA GeForce GTX Titan Z that draws 375 watts! 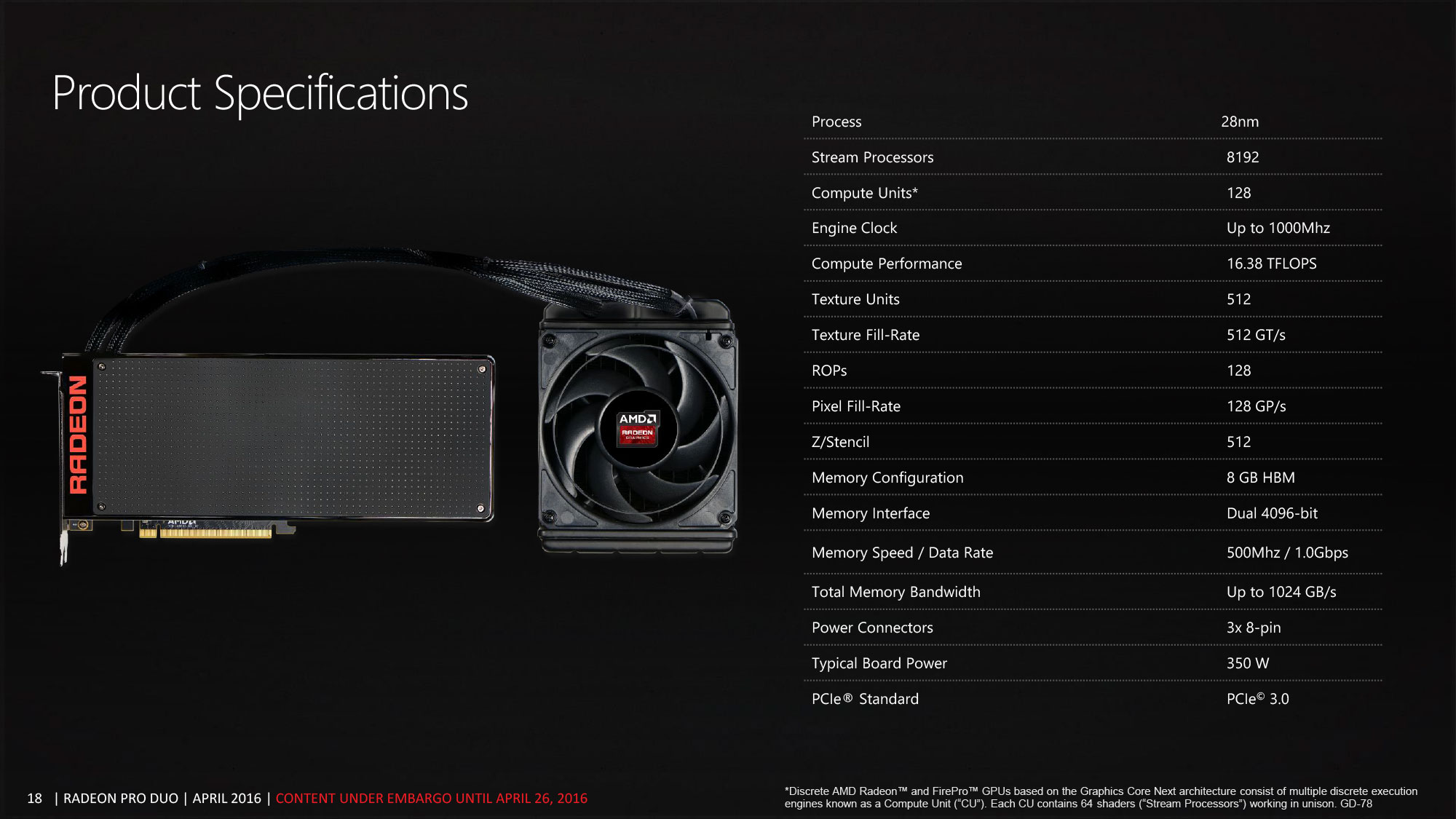 Here is the specification breakdown of the Radeon Pro Duo. The card has 8192 total stream processors and 128 Compute Units, split evenly between the two GPUs. You are getting two full Fiji XT GPUs in this card, an impressive feat made possible in part by the use of High Bandwidth Memory and its smaller physical footprint.

The Radeon Pro Duo has a rated clock speed of up to 1000 MHz. That’s the same clock speed as the R9 Fury and the rated “up to” frequency on the R9 Nano. It’s worth noting that we did see a handful of instances where the R9 Nano’s power limiting capability resulted in some extremely variable clock speeds in practice. AMD recently added a feature to its Crimson driver to disable power metering on the Nano, at the expense of more power draw, and I would assume the same option would work for the Pro Duo.

The rest of the specs are self-explanatory – they are double everything of a single Fiji GPU. The card will require three 8-pin power connectors, so you’ll want a beefy PSU to power it. In theory, the card COULD pull as much as 525 watts (150 watts from each 8-pin connector, 75 watts over the PCI Express bus). 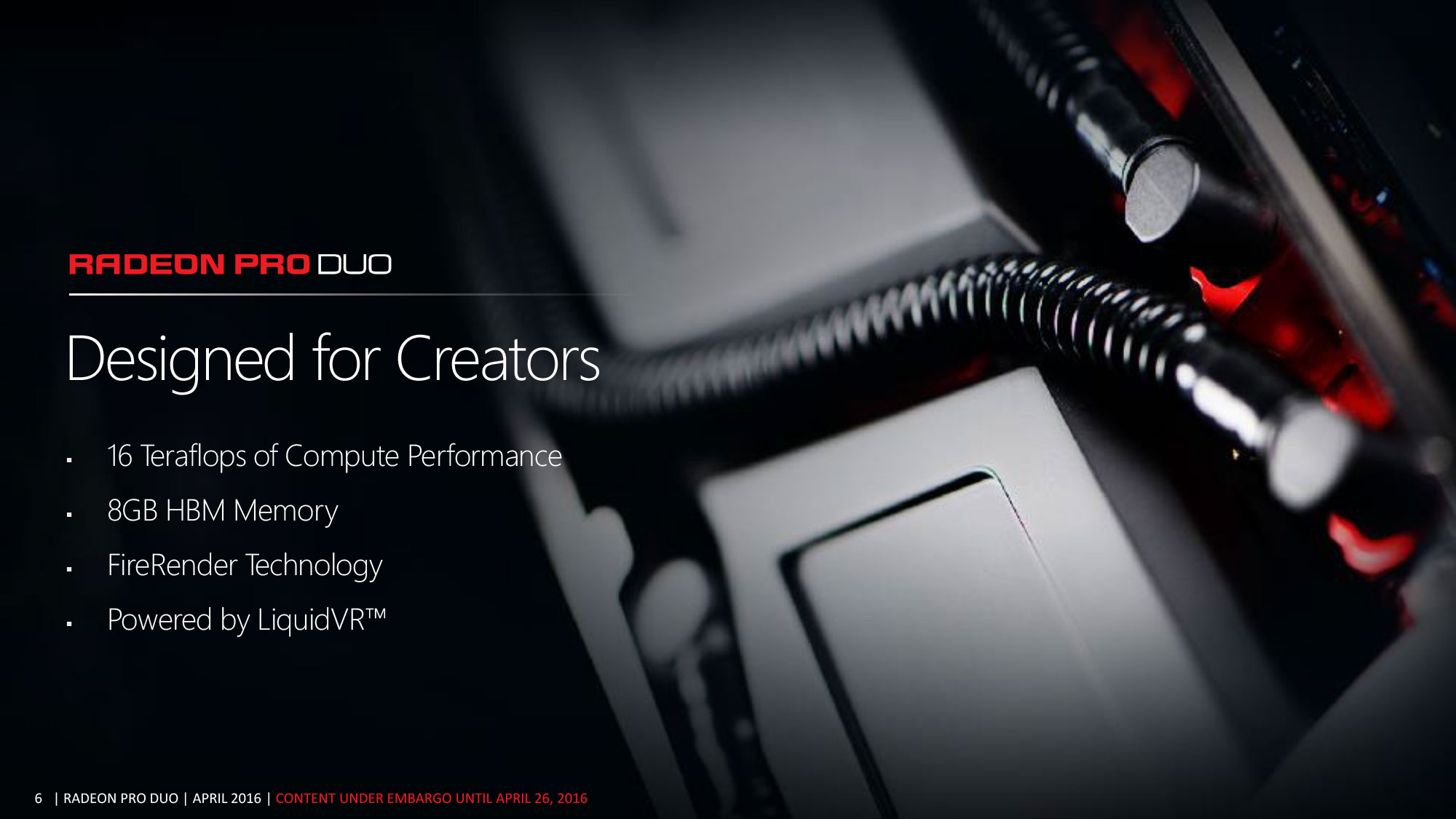 AMD is definitely directing the Radeon Pro Duo towards professionals and creators, for several reasons. In terms of raw compute power, there isn’t a GPU on the market that will be able to match what the Pro Duo can do. For developers looking to have access to more GPU horsepower, the price of $1500 will be more than bearable and will give a pathway to really start diving into multi-GPU scaling integration for VR and DX12. AMD even calls out its FireRender technology, meant to help software developers integrate a rendering path for third-party applications. 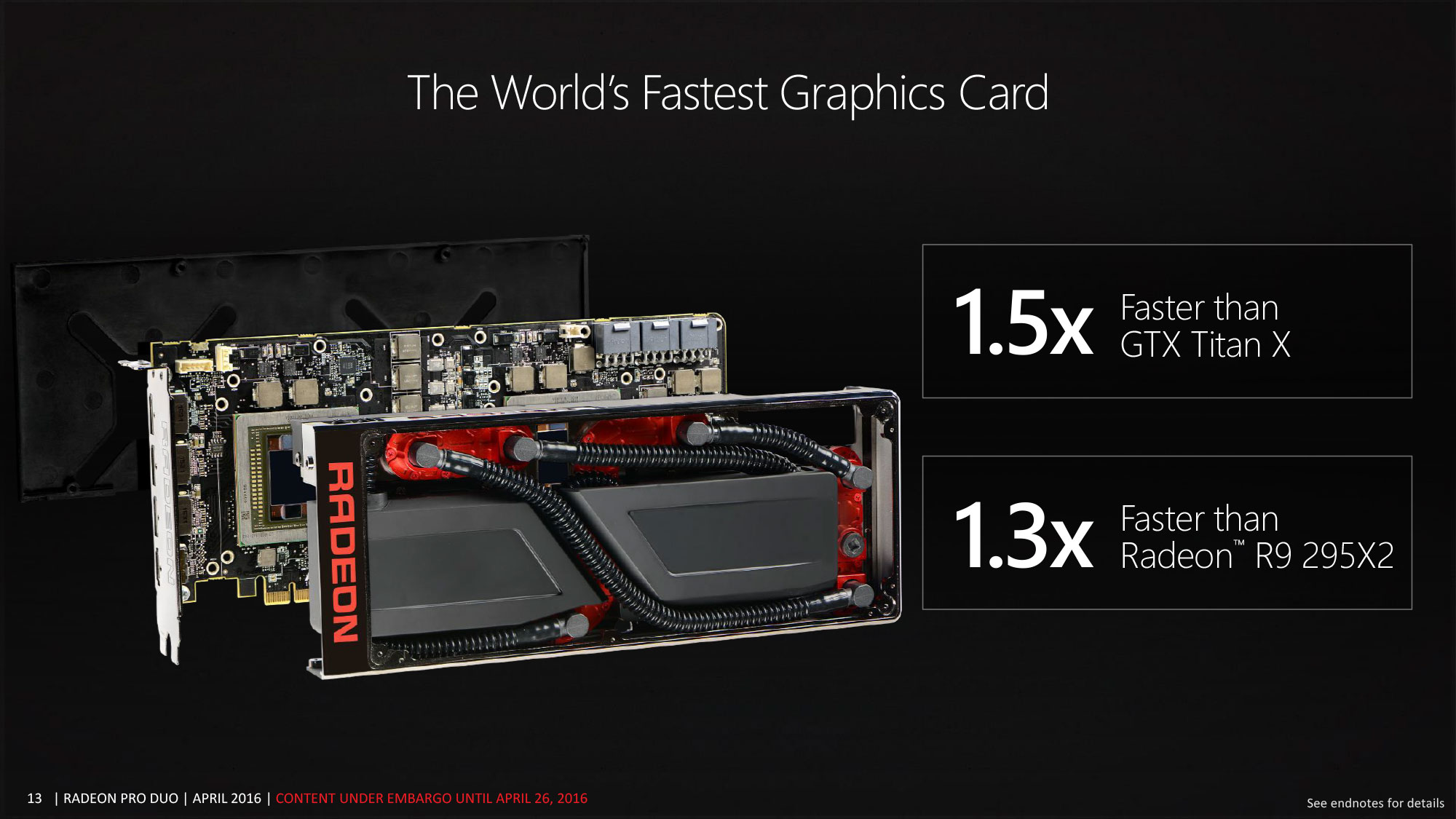 But calling yourself out as the “world’s fastest graphics card” also means you are putting yourself squarely in the sights of PC gamers. At the Capsaicin event, AMD said the card was built for "creators that game and gamers that create." AMD claims the Radeon Pro Duo is 1.5x the performance of the GeForce GTX Titan X from NVIDIA and 1.3x the performance of its own Radeon R9 295X2. 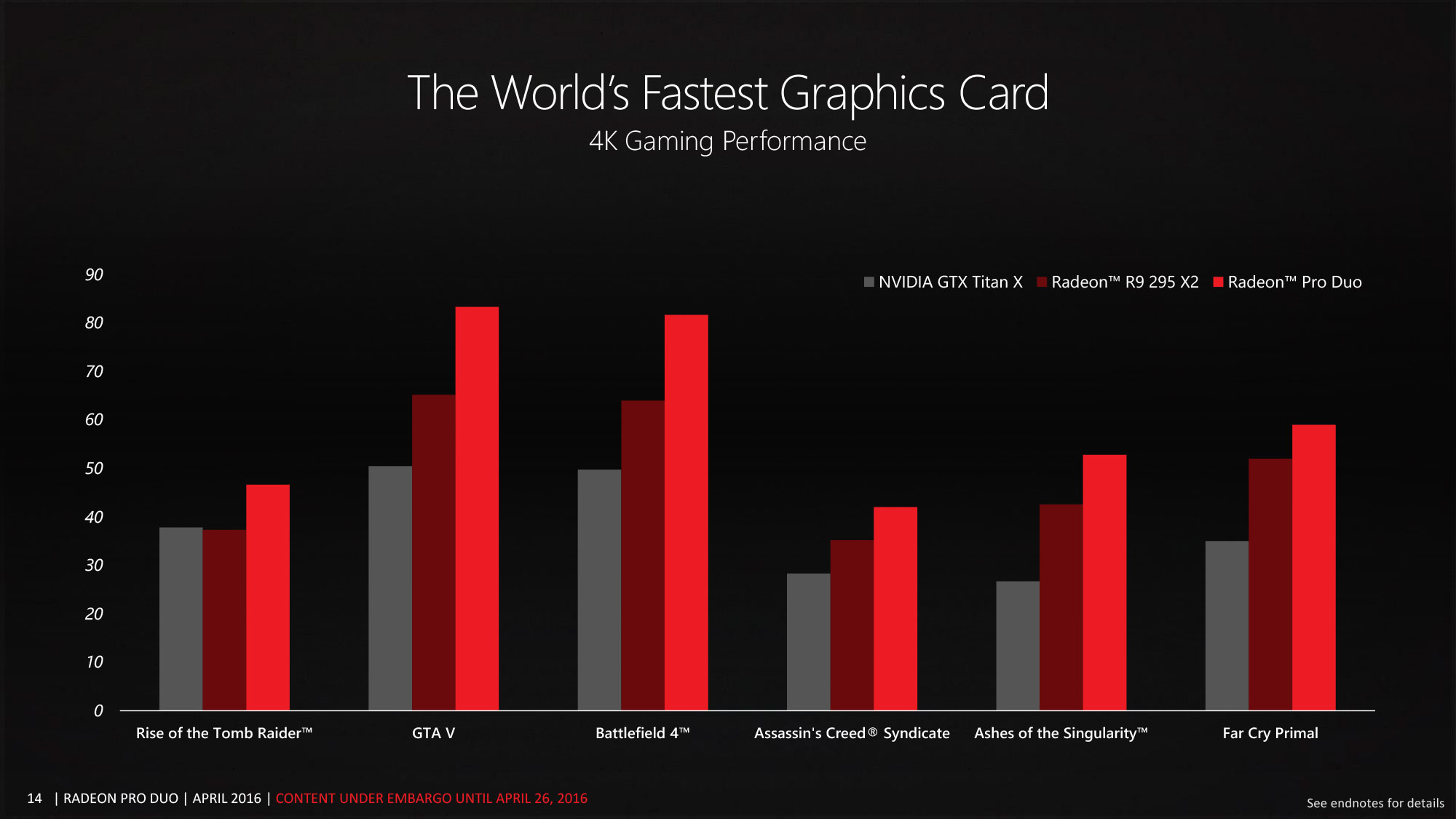 AMD even shows gaming benchmarks in its slide deck, showing performance leads in Rise of the Tomb Raider, Grand Theft Auto V, Battlefield 4, Assassin’s Creed Syndicate, Ashes of the Singularity and Far Cry Primal.  All of this testing was done at 4K, and we assume pretty close to maximum quality settings. Even though AMD says it would like to avoid pitching the Radeon Pro Duo to gamers, it’s clear that the company sees it as a marketing bullet point worth promoting.

Obviously the problem with the Radeon Pro Duo for gaming is that it depends on multi-GPU scaling for it reach its potential. The Titan X is a single GPU card and thus NVIDIA has much less trouble getting peak performance. AMD depends on CrossFire scaling to get peak performance (and the rated 16 TFLOPS) for any single game. For both NVIDIA and AMD, that can be a difficult process, and is a headache we have always discussed when looking at multi-GPU setups, whether they be on a single card or multiple. 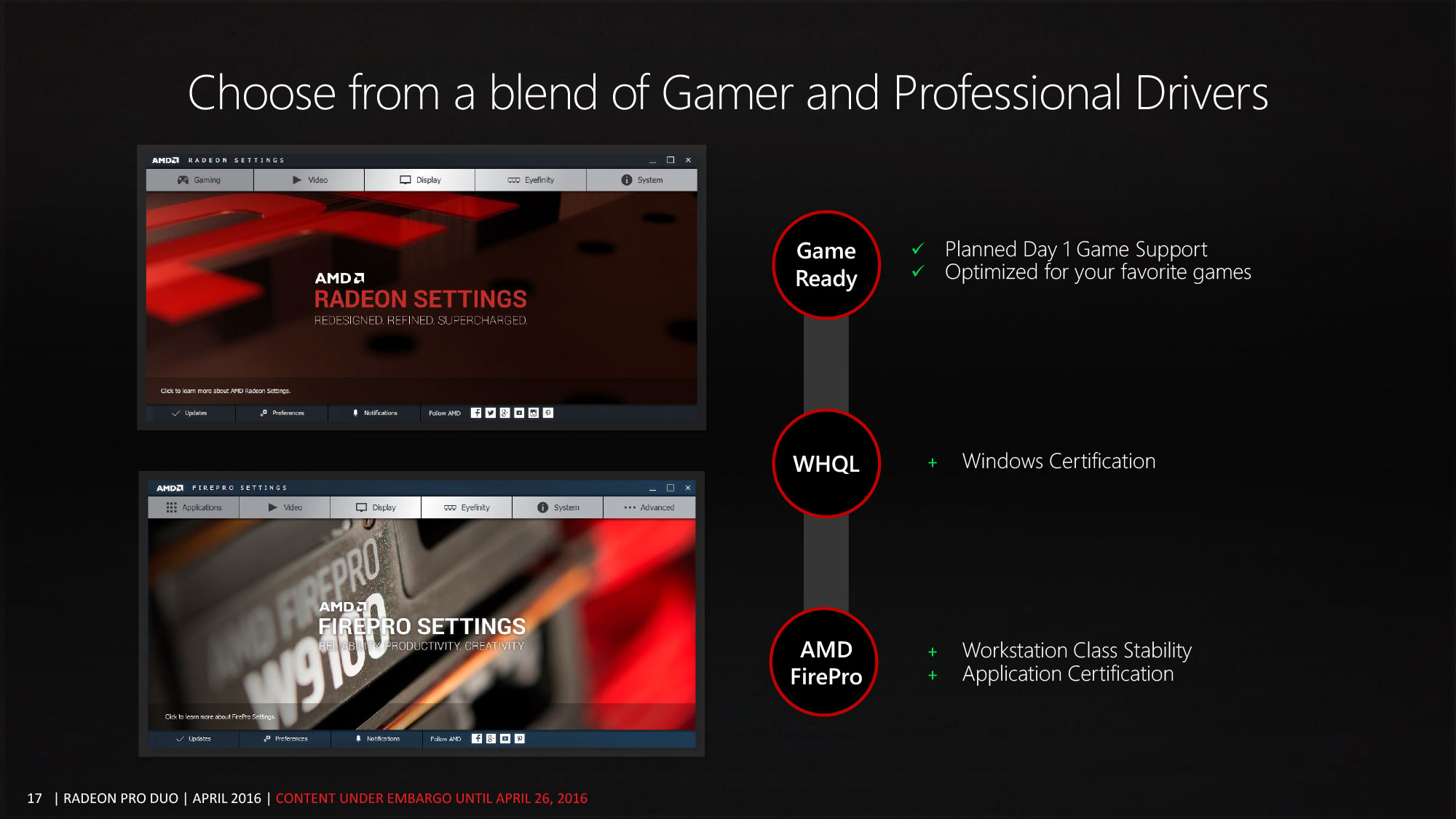 Our final leaked slide indicates that AMD will have both Radeon Crimson and FirePro branded drivers for the Radeon Pro Duo. I would assume that you would select which driver you wanted to install based on your intended use – gaming or development.

That’s pretty much all the information we have on the Radeon Pro Duo without getting a sample and doing our own testing. Clearly the card is going to be an interesting product. Its price, performance profile, and timing all make it a questionable release. The Radeon Pro Duo could be an amazing performer for high-end PC gaming as long as buyers are willing to accept the complication of multi-GPU configurations. The price is steep, at $1499, that is the same cost as three Radeon R9 Nanos. I estimate the performance of the Radeon Pro Duo to basically equate to a pair of R9 Nano cards running in CrossFire, which would run $500 less than this new product. As for timing, AMD is making no secret of the pending release of new hardware based on the Polaris architecture, which improves efficiency, adds support for HDMI 2.0 and DP 1.3 and quite a bit more. Buying a high-end graphics cards based on the out-going architecture will be a tough pill to swallow for many.

Even so, it is likely that the Radeon Pro Duo will be the fastest AMD graphics card for some time to come, even after Polaris hits the streets.

Hopefully I’ll be able to get some hands-on time with a card in the near future to judge for ourselves where the Radeon Pro Duo fits into the ecosystem. We are working on doing just that…

UPDATE (4/26/16): Now that we have the official press slide deck from AMD available to us, there was some additional information shown in it that I wanted to share with our readers. First, if you wanted a better look at the build of the PCB and the construction of the cooler, here are a couple of cool shots. 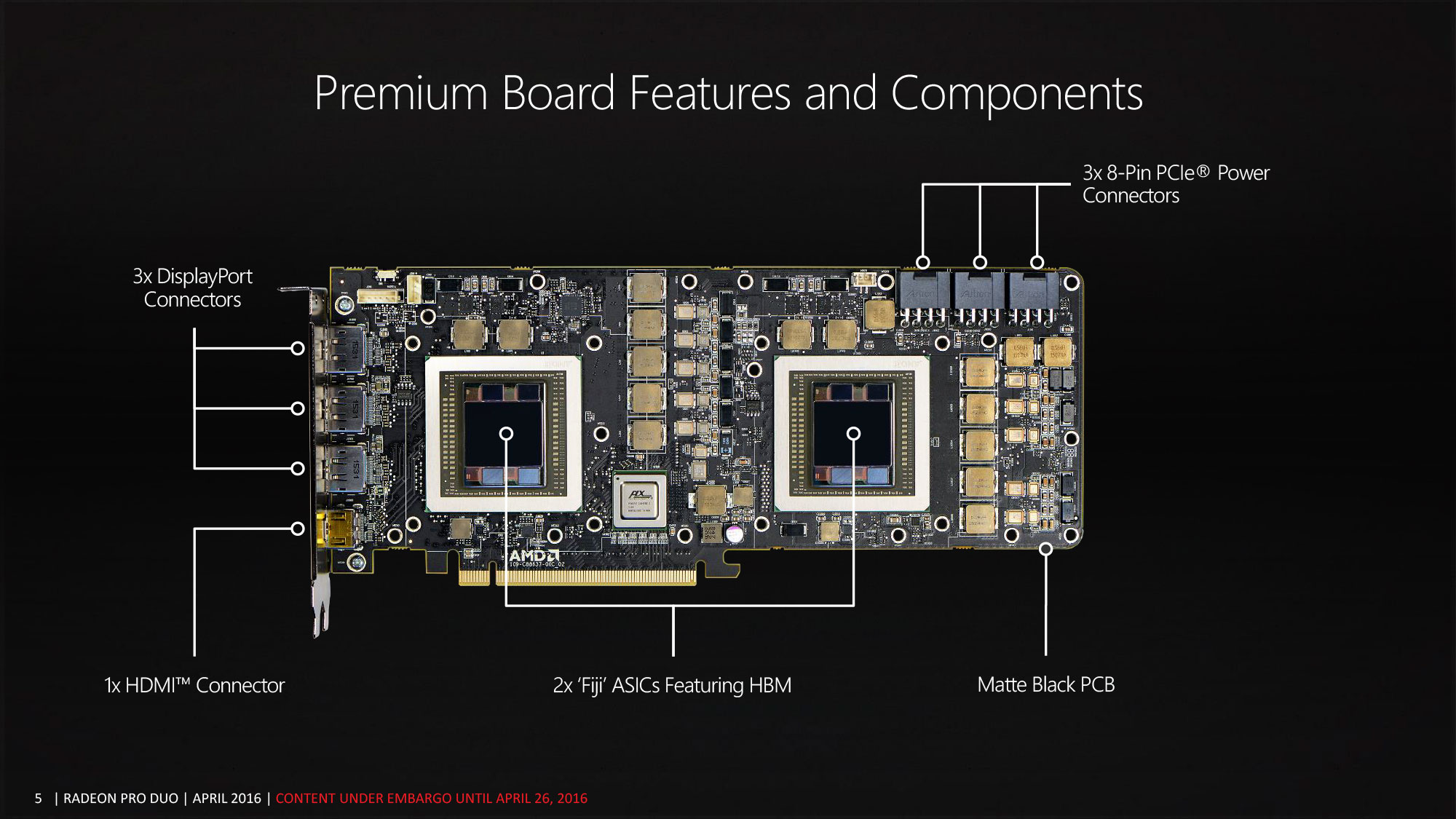 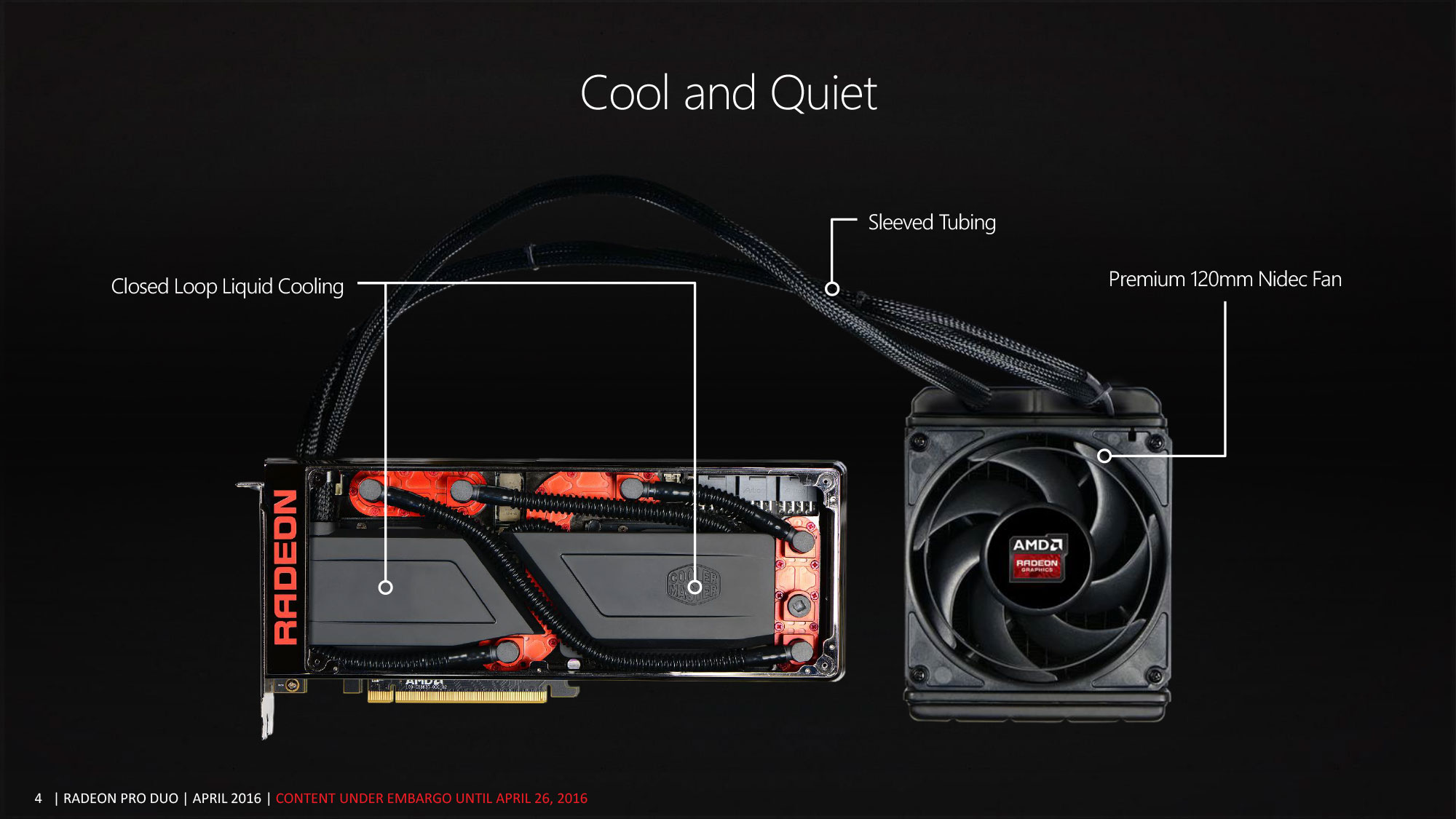 The two distinct liquid coolers are still being built by Cooler Master despite the early issues we had with the Fury X pump noise. The design looks impressive, with interconnected pumps inline with each other driving the 350+ watt card into reasonable temperatures (I assume, having no hands on with the card). The bare PCB shows two massive Fiji XT GPUs with HBM and a PLX bridge between them to manage PCI Express traffic. 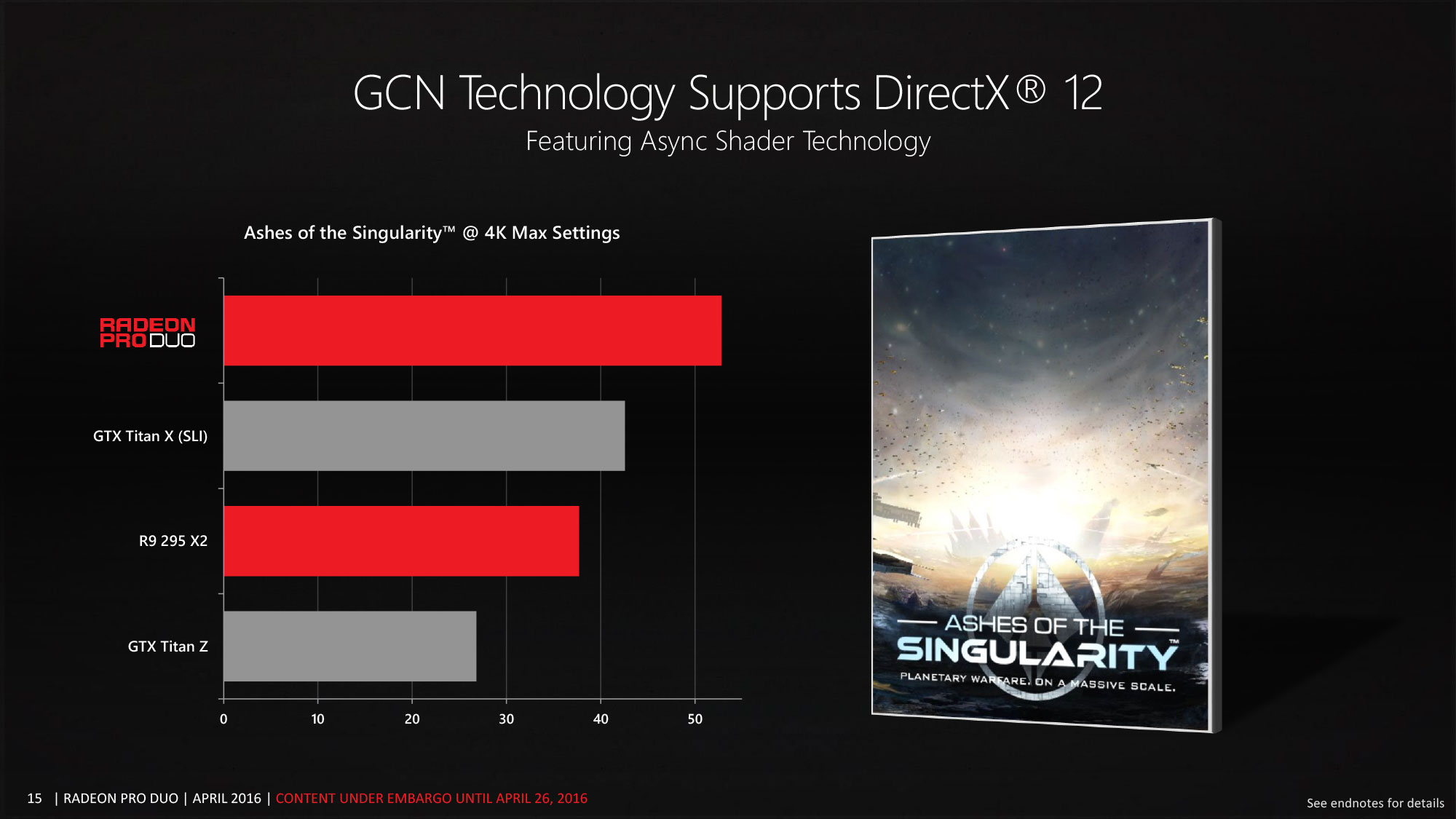 Though AMD provided sample benchmark data pitting the Radeon Pro Duo against a single Titan X in a handful of games, this comparison in Ashes of the Singularity actually compares the new AMD flagship to the GTX Titan X in SLI! Here, at 4K resolution and maximum image quality settings, the Radeon Pro Duo is able to cross 50 FPS and beat the two GTX Titan X cards by about ~20%. 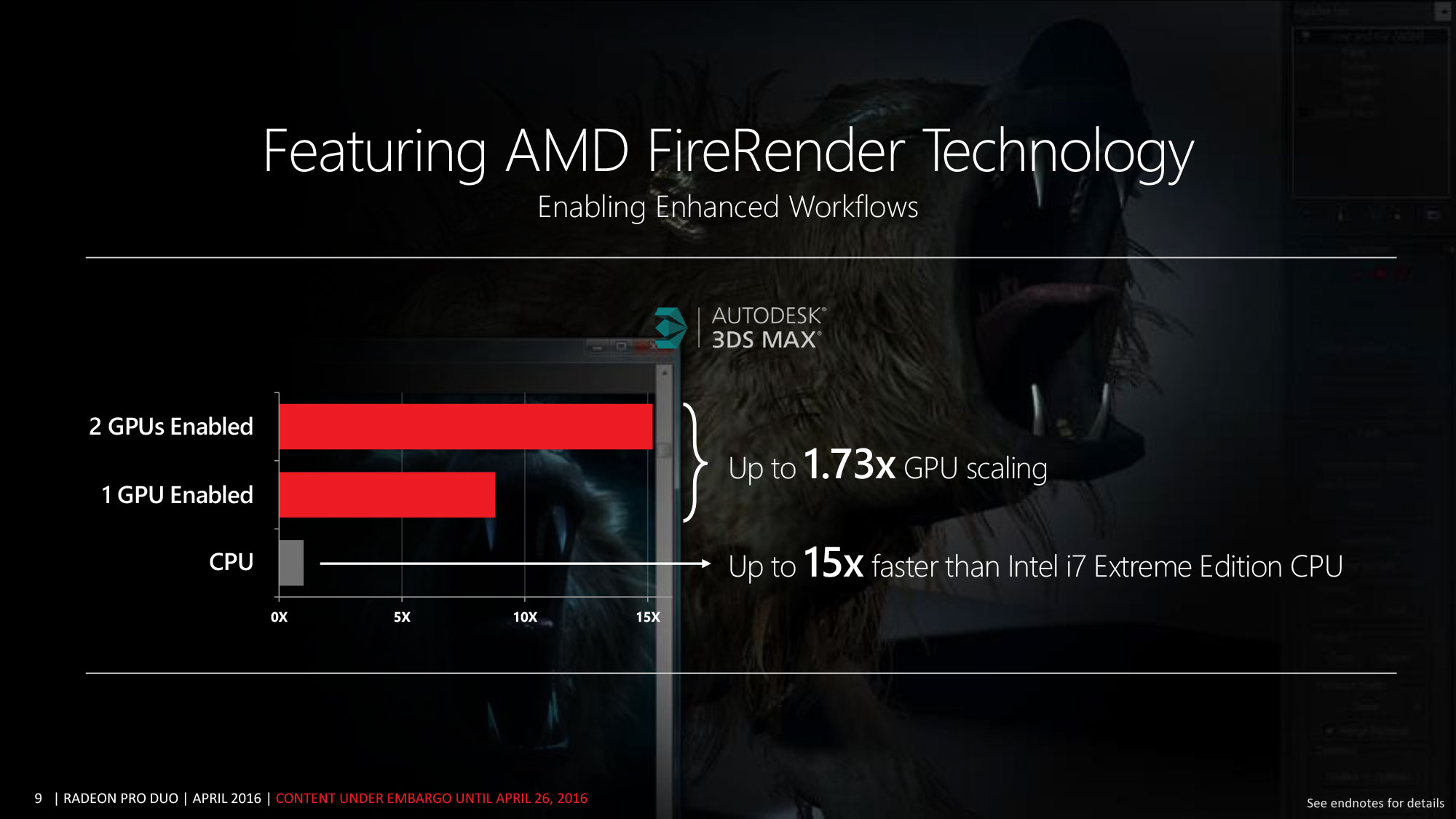 Finally, the "official" target for the Radeon Pro Duo is the professional market, and AMD does provide some scaling numbers for the card in applications like 3DS Max. Even though a comparison to a high-end Intel Extreme Edition processor is a bit of laughable data point, AMD does see 1.73x scaling for the Radeon Pro Duo with both GPUs enabled compared to just a single GPU option like you have with the Fury X or the R9 Nano.