Based on a new report coming from Giant Bomb, Sony is set to release a new console this year with upgraded processing power and a focus on 4K capabilities, code named NEO. We have been hearing for several weeks that both Microsoft and Sony were planning partial generation upgrades but it appears that details for Sony's update have started leaking out in greater detail, if you believe the reports.

Giant Bomb isn't known for tossing around speculation and tends to only report details it can safely confirm. Austin Walker says "multiple sources have confirmed for us details of the project, which is internally referred to as the NEO."

There are plenty of interesting details in the story, including Sony's determination to not split the user base with multiple consoles by forcing developers to have a mode for the "base" PS4 and one for NEO. But most interesting to us is the possible hardware upgrade.

The NEO will feature a higher clock speed than the original PS4, an improved GPU, and higher bandwidth on the memory. The documents we've received note that the HDD in the NEO is the same as that in the original PlayStation 4, but it's not clear if that means in terms of capacity or connection speed.

Games running in NEO mode will be able to use the hardware upgrades (and an additional 512 MiB in the memory budget) to offer increased and more stable frame rate and higher visual fidelity, at least when those games run at 1080p on HDTVs. The NEO will also support 4K image output, but games themselves are not required to be 4K native.

Giant Bomb even has details on the architectural changes.

(We actually did a full video teardown of the PS4 on launch day!)

If the Compute Unit count is right from the GB report, then the PS4 NEO system will have 2,304 stream processors running at 911 MHz, giving it performance nearing that of a consumer Radeon R9 390 graphics card. The R9 390 has 2,560 SPs running at around 1.0 GHz, so while the NEO would be slower, it would be a substantial upgrade over the current PS4 hardware and the Xbox One. Memory bandwidth on NEO is still much lower than a desktop add-in card (218 GB/s vs 384 GB/s). 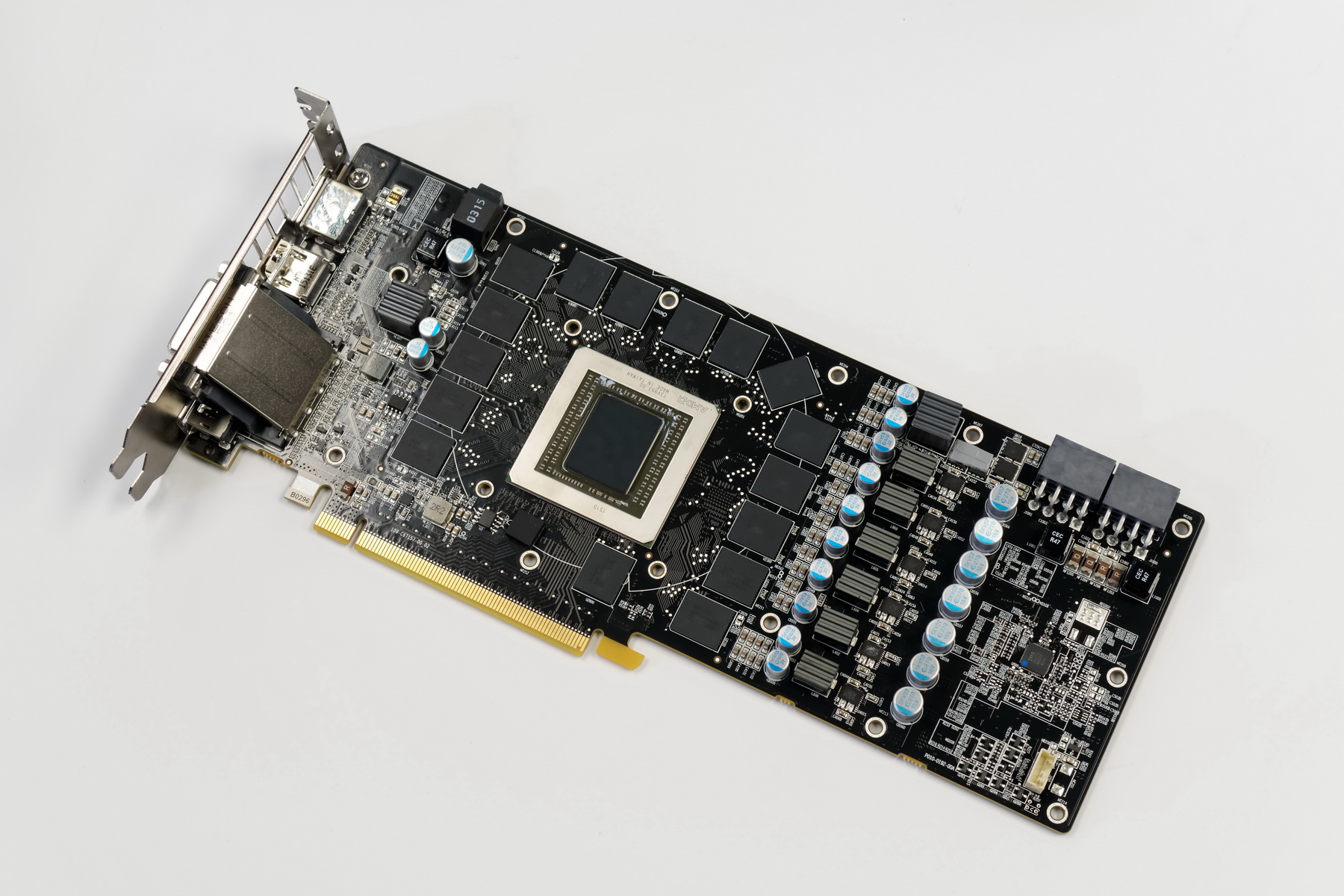 If the NEO hardware is based on Grenada / Hawaii GPU design, there are some interesting questions to ask. With the push into 4K that we expect with the upgraded PlayStation, it would be painful if the GPU didn't natively support HDMI 2.0 (4K @ 60 Hz). With the modularity of current semi-custom APU designs it is likely that AMD could swap out the display controller on NEO with one that can support HDMI 2.0 even though no consumer shipping graphics cards in the 300-series does so.

It is also POSSIBLE that NEO is based on the upcoming AMD Polaris GPU architecture, which supports HDR and HDMI 2.0 natively. That would be a much more impressive feat for both Sony and AMD, as we have yet to see Polaris released in any consumer GPU. Couple that with the variables of 14/16nm FinFET process production and you have a complicated production pipe that would need significant monitoring. It would potentially lower cost on the build side and lower power consumption for the NEO device, but I would be surprised if Sony wanted to take a chance on the first generation of tech from AMD / Samsung / Global Foundries.

However, if you look at recent rumors swirling about the June announcement of the Radeon R9 480 using the Polaris architecture, it is said to have 2,304 stream processors, perfectly matching the NEO specs above. 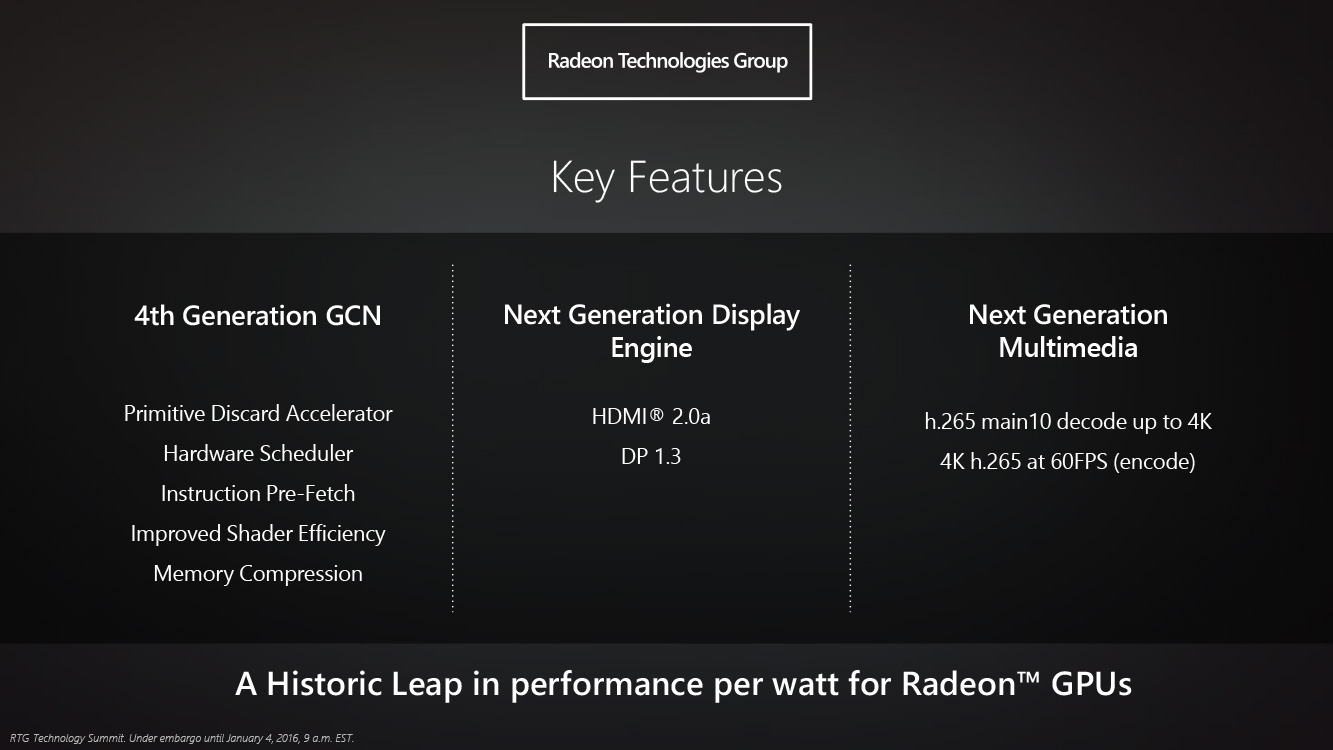 New features of the AMD Polaris architecture due this summer

There is a lot Sony and game developers could do with roughly twice the GPU compute capability on a console like NEO. This could make the PlayStation VR a much more comparable platform to the Oculus Rift and HTC Vive though the necessity to work with the original PS4 platform might hinder the upgrade path.

The other obvious use is to upgrade the image quality and/or rendering resolution of current games and games in development or just to improve the frame rate, an area that many current generation consoles seem to have been slipping on.

In the documents we’ve received, Sony offers suggestions for reaching 4K/UltraHD resolutions for NEO mode game builds, but they're also giving developers a degree of freedom with how to approach this. 4K TV owners should expect the NEO to upscale games to fit the format, but one place Sony is unwilling to bend is on frame rate. Throughout the documents, Sony repeatedly reminds developers that the frame rate of games in NEO Mode must meet or exceed the frame rate of the game on the original PS4 system.

There is still plenty to read in the Giant Bomb report, and I suggest you head over and do so. If you thought the summer was going to be interesting solely because of new GPU releases from AMD and NVIDIA, it appears that Sony and Microsoft have their own agenda as well.