AMD has launched what it calls the “world’s fastest graphics card”. Is it?

The Radeon Pro Duo had an interesting history. Originally shown as an unbranded, dual-GPU PCB during E3 2015, which took place last June, AMD touted it as the ultimate graphics card for both gamers and professionals. At that time, the company thought that an October launch was feasible, but that clearly didn’t work out. When pressed for information in the Oct/Nov timeframe, AMD said that they had delayed the product into Q2 2016 to better correlate with the launch of the VR systems from Oculus and HTC/Valve.

During a GDC press event in March, AMD finally unveiled the Radeon Pro Duo brand, but they were also walking back on the idea of the dual-Fiji beast being aimed at the gaming crowd, even partially. Instead, the company talked up the benefits for game developers and content creators, such as its 8192 stream processors for offline rendering, or even to aid game devs in the implementation and improvement of multi-GPU for upcoming games. 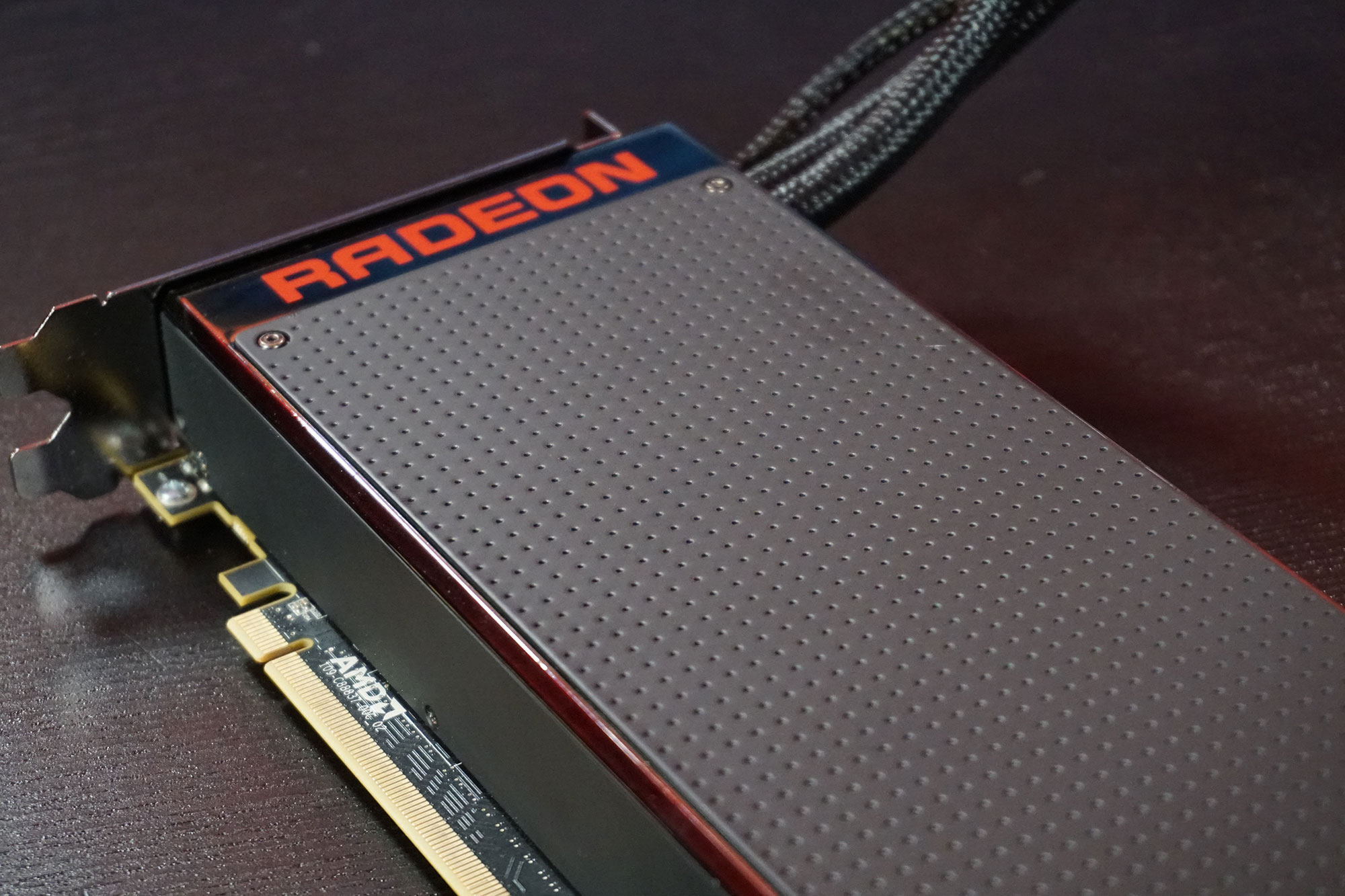 Anyone that pays attention to the graphics card market can see why AMD would make the positional shift with the Radeon Pro Duo. The Fiji architecture is on the way out, with Polaris due out in June by AMD’s own proclamation. At $1500, the Radeon Pro Duo will be a stark contrast to the prices of the Polaris GPUs this summer, and it is well above any NVIDIA-priced part in the GeForce line. And, though CrossFire has made drastic improvements over the last several years thanks to new testing techniques, the ecosystem for multi-GPU is going through a major shift with both DX12 and VR bearing down on it.

So yes, the Radeon Pro Duo has both RADEON and PRO right there in the name. What’s a respectable PC Perspective graphics reviewer supposed to do with a card like that if it finds its way into your office? Test it of course! I’ll take a look at a handful of recent games as well as a new feature that AMD has integrated with 3DS Max called FireRender to showcase some of the professional chops of the new card.

The information provided here is an overview of the specifications and design of the card itself. If you read over our preview story already, there isn’t much new here other than a couple of photos we took in-house. If you are ready to jump right to the test results, feel free to do so!

The design of the card follows the same industrial design as the reference designs of the Radeon Fury X, and integrates a dual-pump cooler and external fan/radiator to keep both GPUs running cool.

The 8GB of HBM (high bandwidth memory) on the card is split between the two Fiji XT GPUs on the card, just like other multi-GPU options on the market. The 350 watts power draw mark is exceptionally high, exceeded only by AMD’s previous dual-GPU beast, the Radeon 295X2 that used 500+ watts and the NVIDIA GeForce GTX Titan Z that draws 375 watts!

Here is the specification breakdown of the Radeon Pro Duo. The card has 8192 total stream processors and 128 Compute Units, split evenly between the two GPUs. You are getting two full Fiji XT GPUs in this card, an impressive feat made possible in part by the use of High Bandwidth Memory and its smaller physical footprint.

The Radeon Pro Duo has a rated clock speed of up to 1000 MHz. That’s the same clock speed as the R9 Fury and the rated “up to” frequency on the R9 Nano. It’s worth noting that we did see a handful of instances where the R9 Nano’s power limiting capability resulted in some extremely variable clock speeds in practice. AMD recently added a feature to its Crimson driver to disable power metering on the Nano, at the expense of more power draw, and I would assume the same option would work for the Pro Duo.

The rest of the specs are self-explanatory – they are double everything of a single Fiji GPU. The card will require three 8-pin power connectors, so you’ll want a beefy PSU to power it. In theory, the card COULD pull as much as 525 watts (150 watts from each 8-pin connector, 75 watts over the PCI Express bus).

AMD is definitely directing the Radeon Pro Duo towards professionals and creators, for several reasons. In terms of raw compute power, there isn’t a GPU on the market that will be able to match what the Pro Duo can do. For developers looking to have access to more GPU horsepower, the price of $1500 will be more than bearable and will give a pathway to really start diving into multi-GPU scaling integration for VR and DX12. AMD even calls out its FireRender technology, meant to help software developers integrate a rendering path for third-party applications. 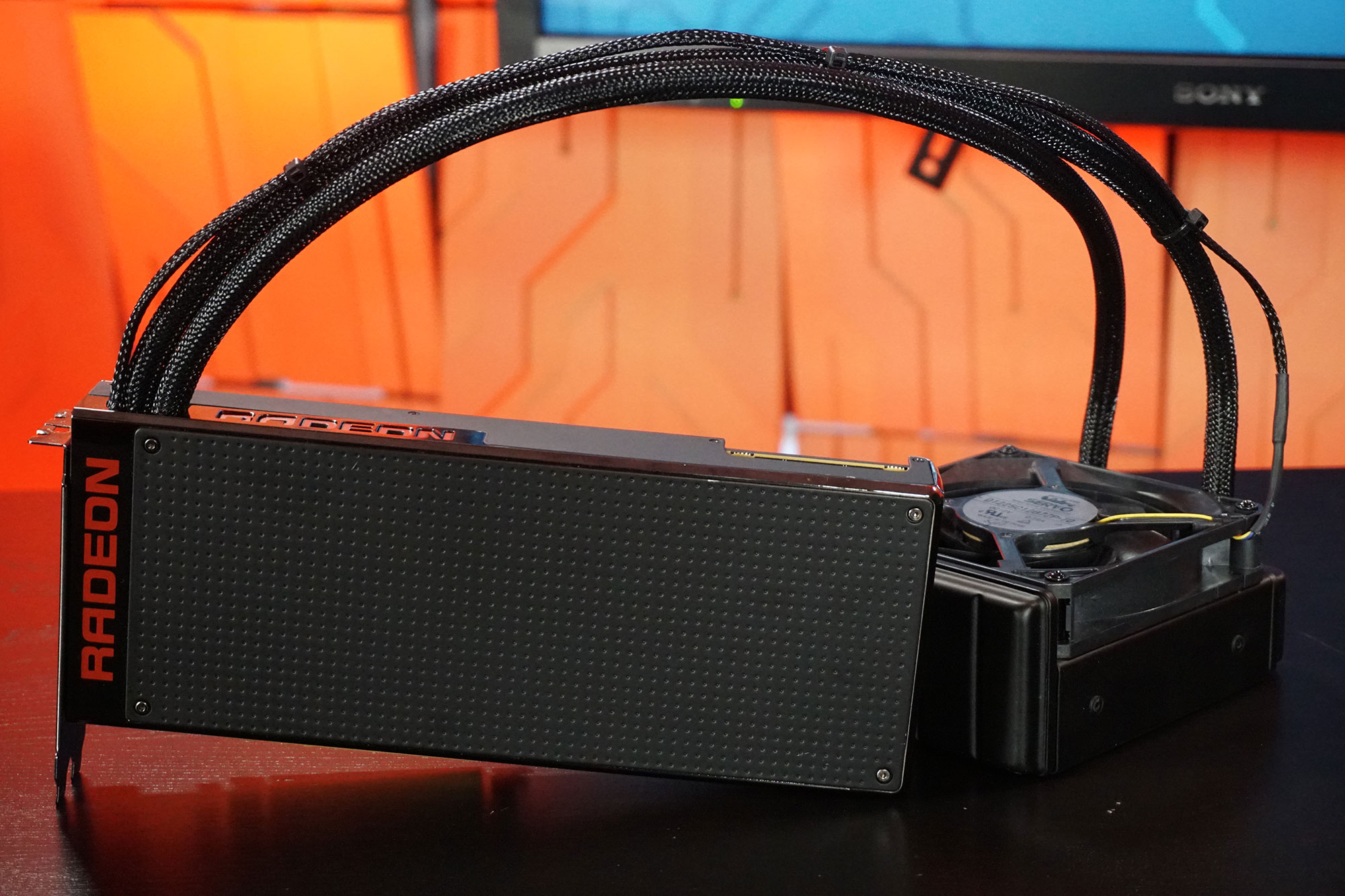 But calling yourself out as the “world’s fastest graphics card” also means you are putting yourself squarely in the sights of PC gamers. At the Capsaicin event, AMD said the card was built for "creators that game and gamers that create." AMD claims the Radeon Pro Duo is 1.5x the performance of the GeForce GTX Titan X from NVIDIA and 1.3x the performance of its own Radeon R9 295X2.

Obviously the problem with the Radeon Pro Duo for gaming is that it depends on multi-GPU scaling for it reach its potential. The Titan X is a single GPU card and thus NVIDIA has much less trouble getting peak performance. AMD depends on CrossFire scaling to get peak performance (and the rated 16 TFLOPS) for any single game. For both NVIDIA and AMD, that can be a difficult process, and is a headache we have always discussed when looking at multi-GPU setups, whether they be on a single card or multiple. 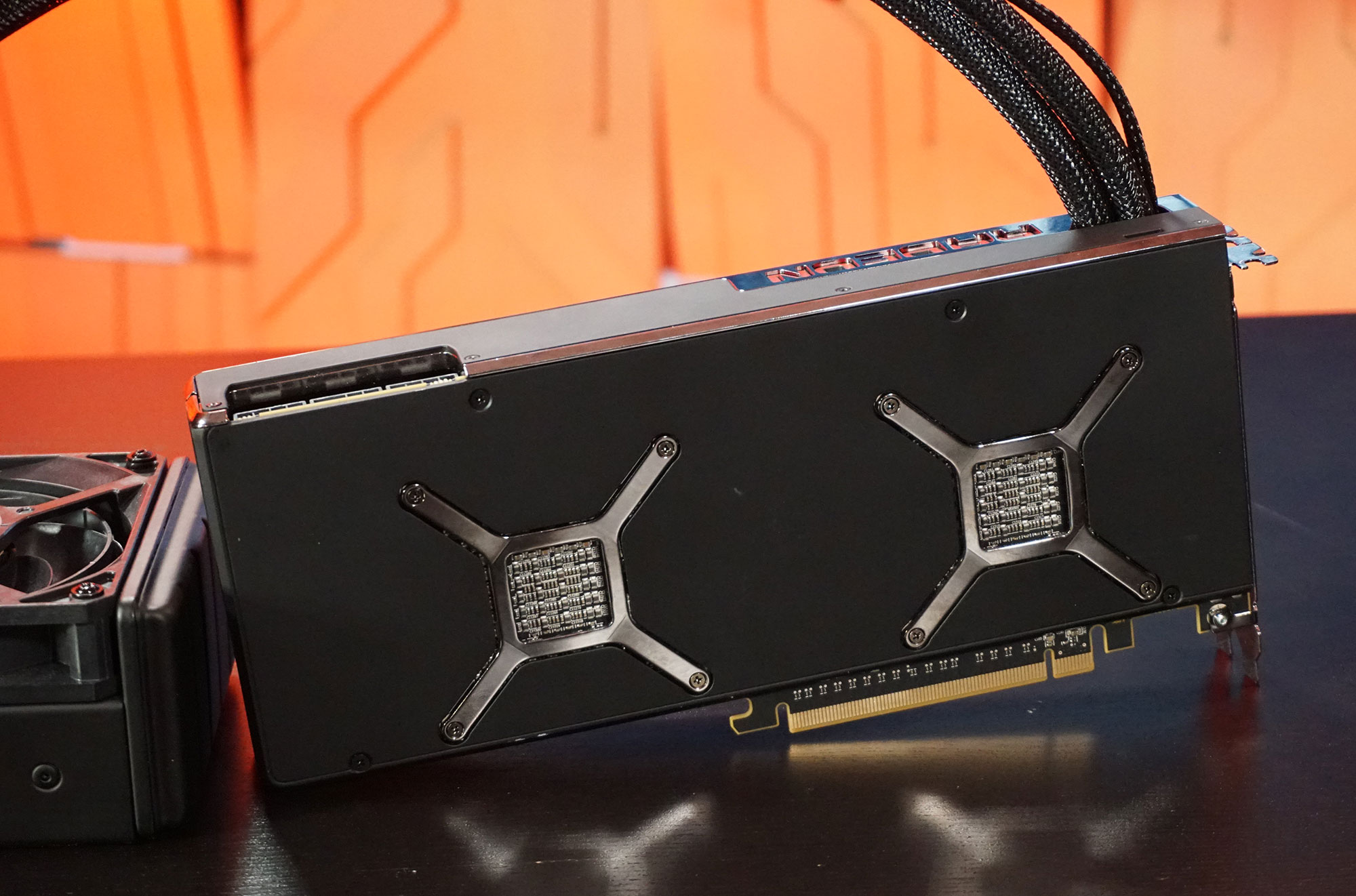 The build of the Radeon Pro Duo is impressive. Much like the Fury X that was released last year, the RPD design is both sleek and classy, representing the gaming market better than any previous AMD reference products we have tested. 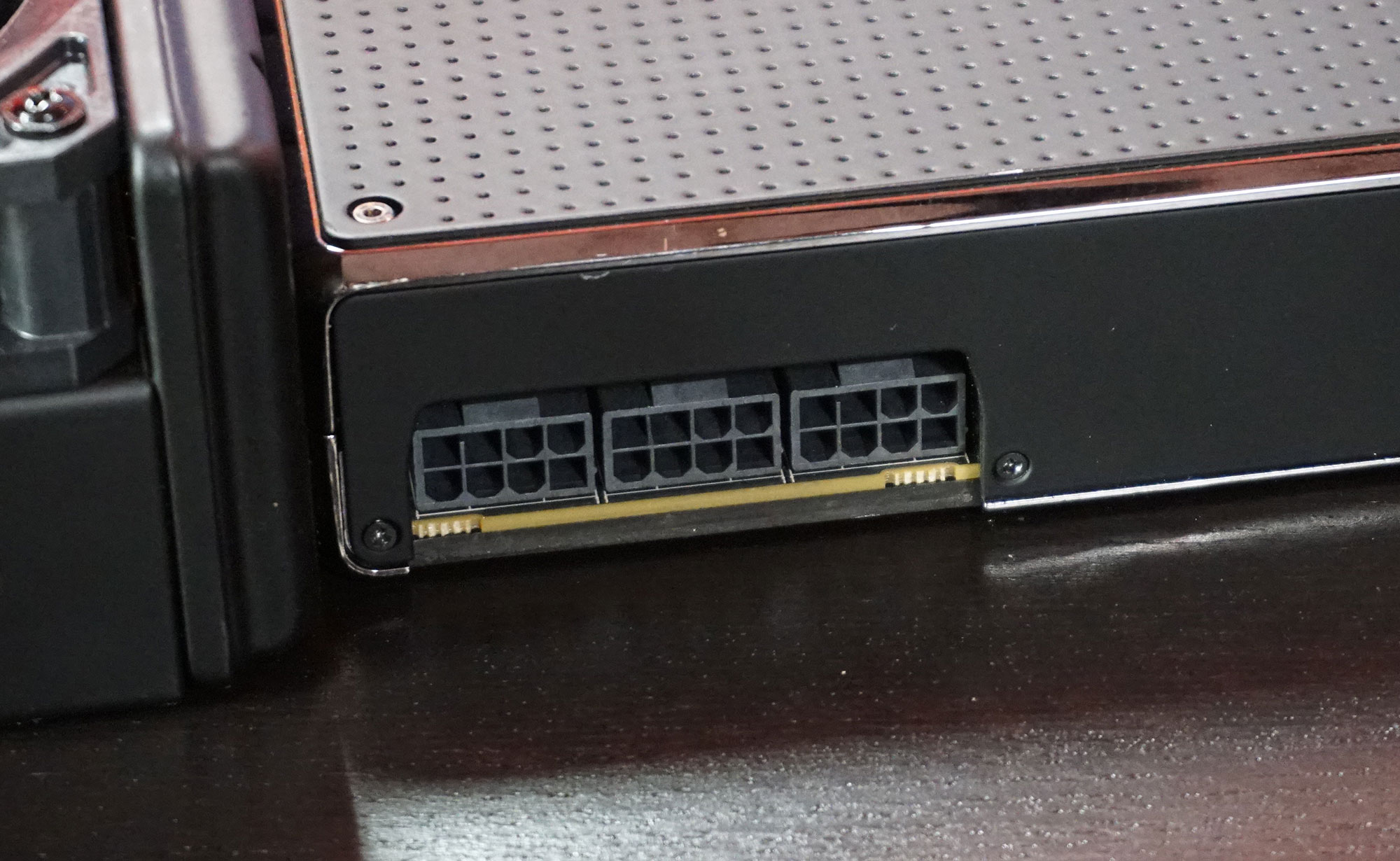 The Radeon Pro Duo is heavy though – so be careful if you are shipping a system with one installed. Mounting the water cooling radiator is a bit easier thanks to the extended tubing compared to the Fury X, which is a nice change. The red Radeon branding along the top of the card remains part of the design as well, and it helps you stand out if you are building the PC inside a windowed case. 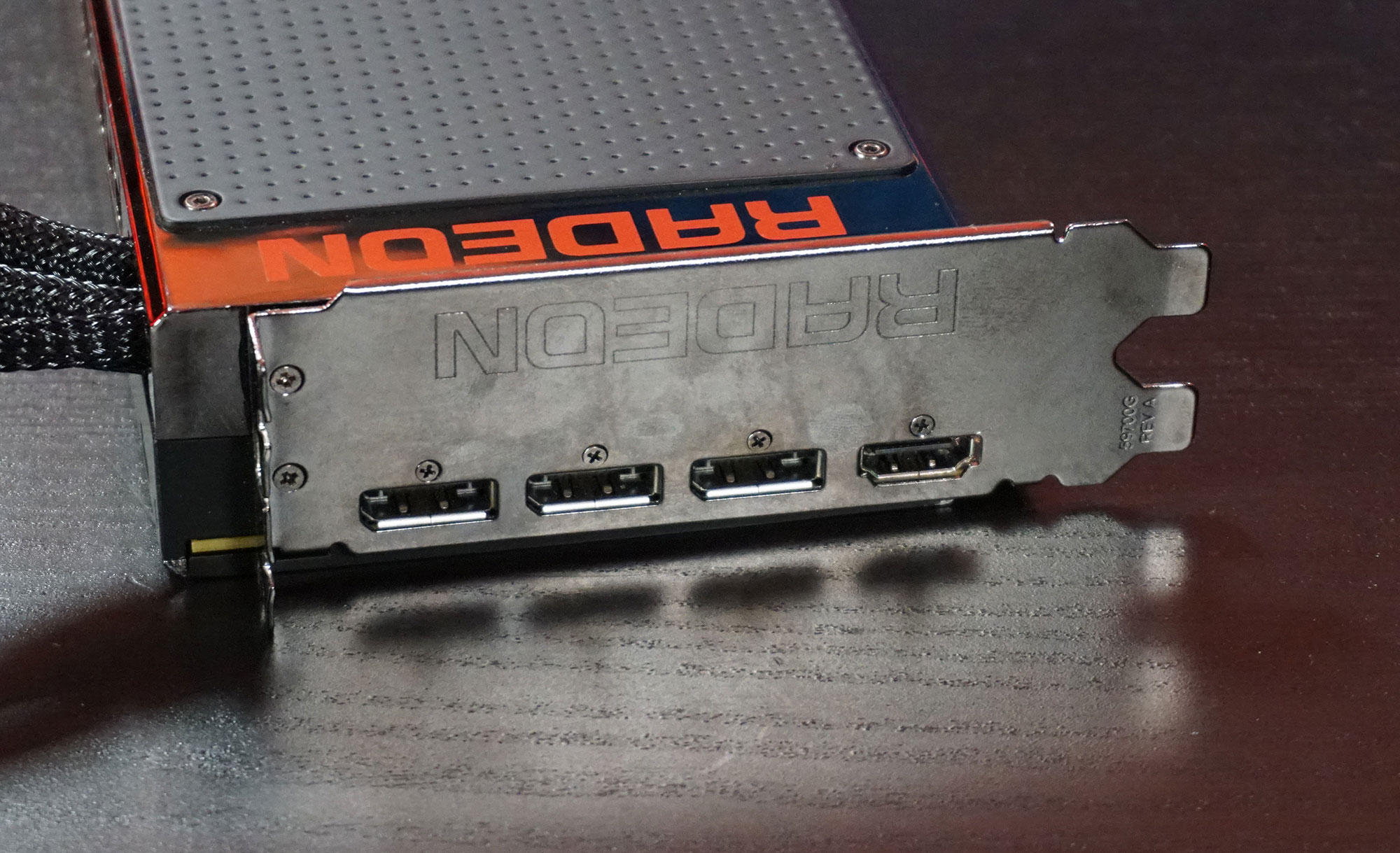 Even better – there is NO noticeable pump noise or coil whine from the card! Unlike the Fury X sample we got on day one, where I cringe starting it up each and every time we have to do testing, the Radeon Pro Duo appears to have been fitted with higher quality pumps and electrical components.