Our testing setup and hardware platform remain unchanged from our most recent graphics articles. It includes a Haswell-E processor, X99 motherboard and more.

For this review we are introducing some of our new game suite as well. Gone are the days of Skyrim, Metro: Last Light and GRID 2. Instead, you’ll see Grand Theft Auto V, Rise of the Tomb Raider, The Witcher 3 and Fallout 4 running at both 2560×1440 and 4K (3840×2160) with very high image quality settings. 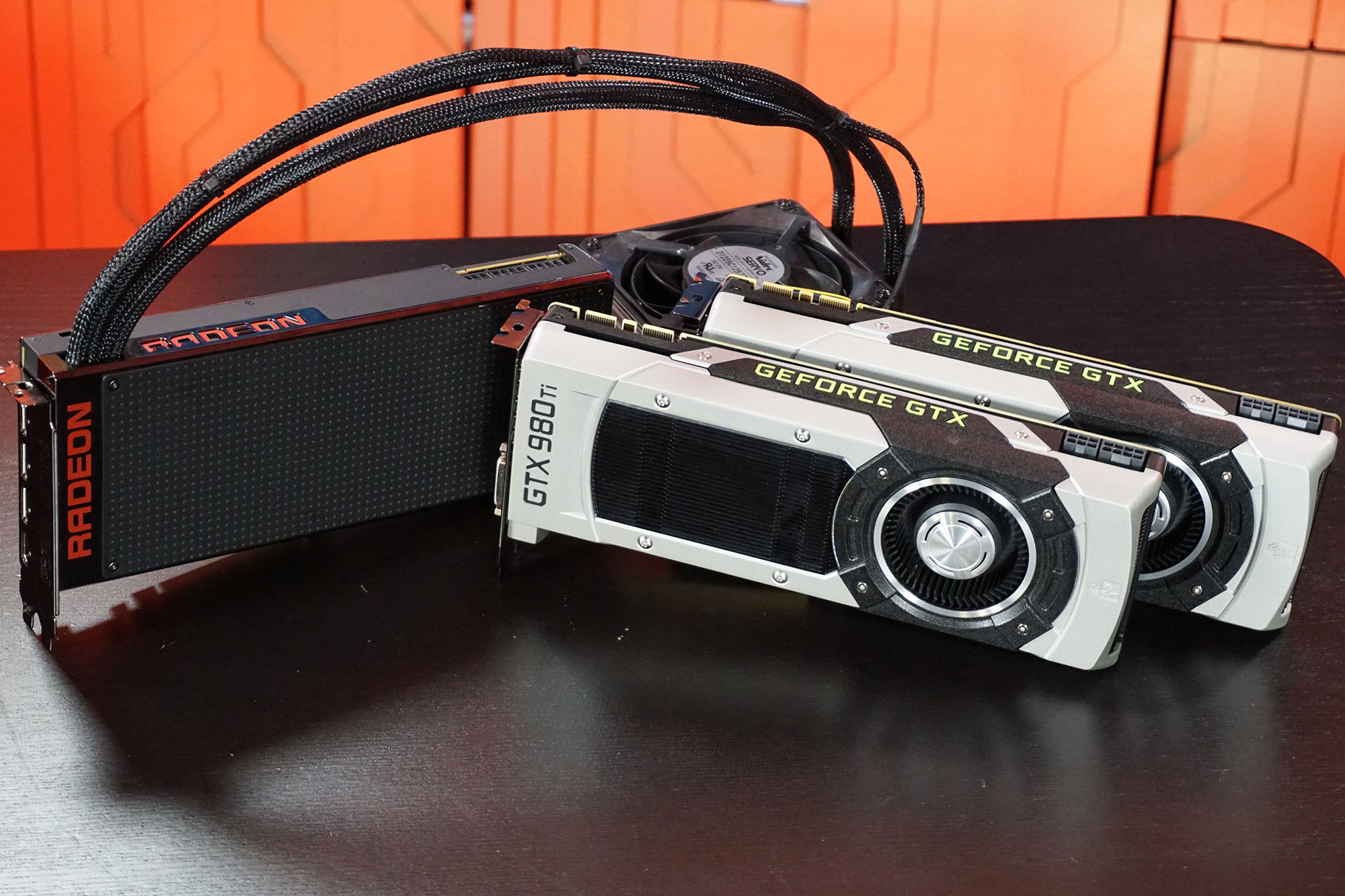 For our hardware comparisons, the Radeon Pro Duo will be going up a combination of relevant Radeon hardware a set of 980 Ti cards in SLI.

The pair of R9 Nano cards in CrossFire is probably the most relevant comparison in terms of specifications – I expect them to perfectly match the results from the Radeon Pro Duo. The Fury X represents the next-fastest graphics cards being sold from AMD while the R9 295X2 is included to compare to the last, fastest ever card from AMD, released in mid-2014. The best comparison for NVIDIA will be a pair of GTX 980 Ti cards running in SLI totaling $1200+.

Though AMD did not provide the Radeon Pro Duo for this review, I approached them about the story and they only asked that we gave some indications of a professional use-case for the card. To that end, we are including results from LuxMark, an OpenCL ray tracing benchmark, as well as 3DS MAX with an OpenCL-based path tracing rendering plugin called FireRender. 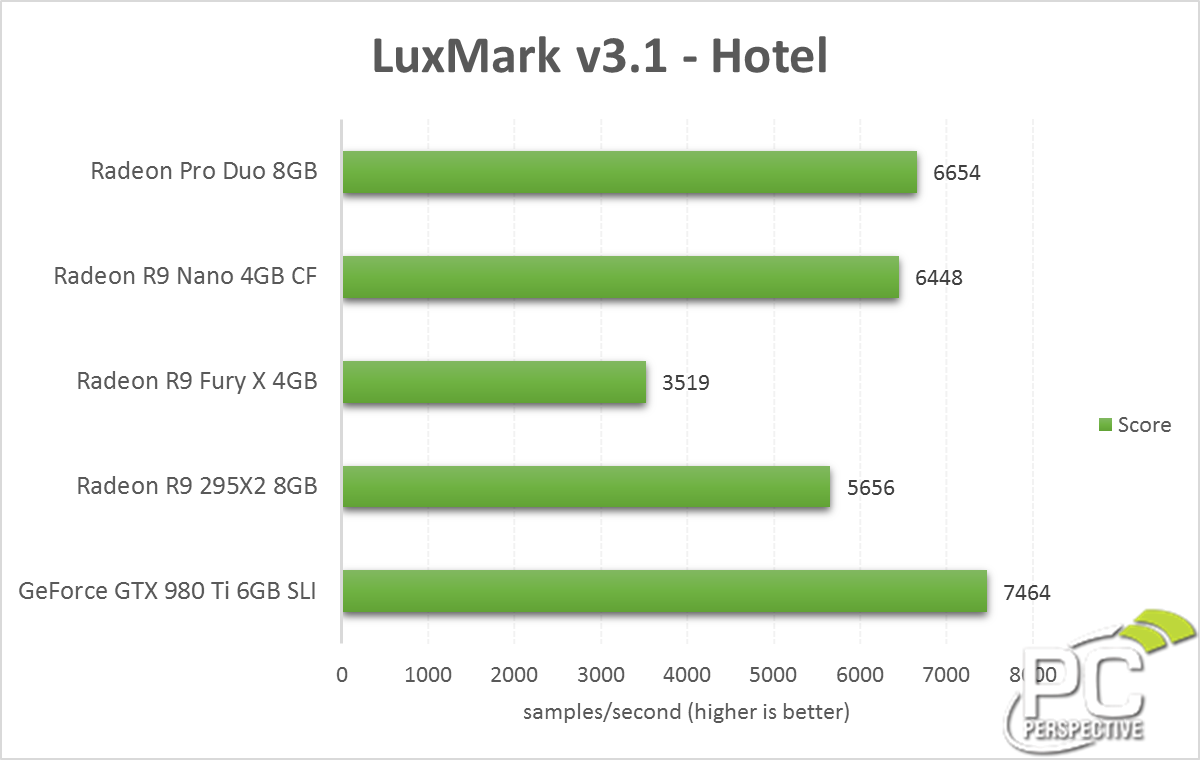 These results are from the “hotel” benchmark, which is the most complex scenario available in LuxMark, and they represent the number of samples computed per second. The Radeon Pro Duo and the Nano cards in CrossFire are within 3% of each other, while the Fury X falls 89% back. The GeForce GTX 980 Ti cards in SLI have the advantage with a score of 7464, a full 12% faster than the Radeon Pro Duo.

Our testing with 3DS MAX uses a sample scene that AMD provided us for our review. Using the trial version of the application, along with the FireRender plug-in downloaded from GitHub, we wanted to see this tool in action. As they describe it, “AMD FireRender for Autodesk 3ds Max is a physically accurate raytracing plugin” and a “full-fledged unbiased path tracing renderer that also includes a native, physically-based material system.” It is built in OpenCL and is completely open, source and all. It runs on all GPU hardware. 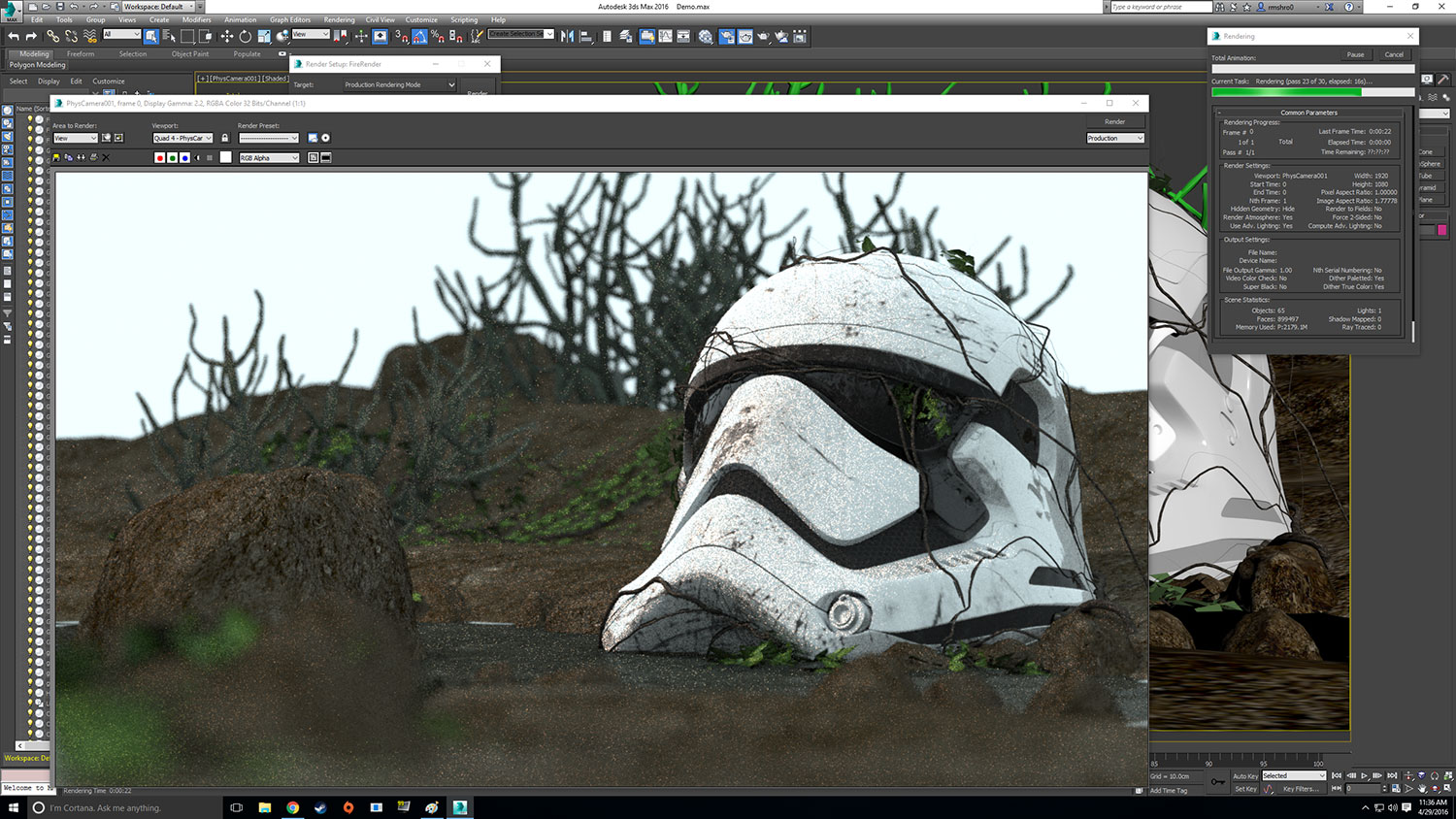 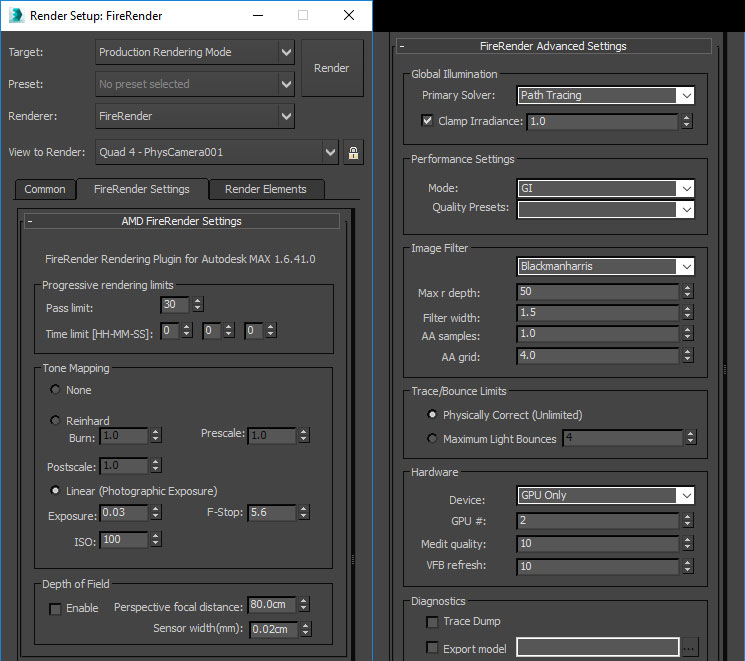 Our testing was pretty simple: 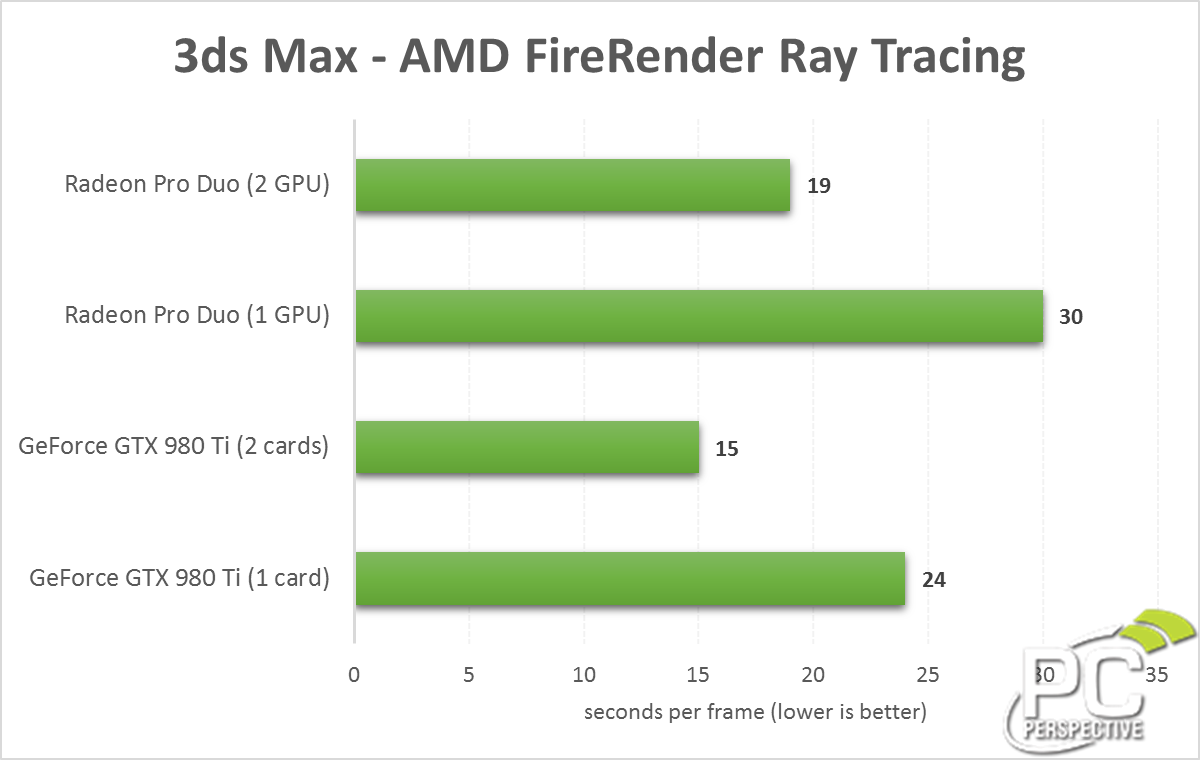 The Radeon Pro Duo shows significant scaling, going from a single GPU to two, improving the render time by almost 60% and, considering that is done with one dual-slot graphics card, that's pretty impressive. It's important to note that, before the release of FireRender, there was not a plug-in for 3ds Max that enabled ray tracing rendering on AMD Radeon or FirePro hardware; instead NVIDIA's plug-ins all use CUDA and are, thus, GeForce/Quadro restricted.

The openness of FireRender also means that the GTX 980 Ti can run it and as you would expect, based on the direct GPU to GPU comparison, it does well. In both single GPU and dual-GPU configurations the GeForce configuration is faster than the Radeon Pro Duo. Keep in mind though, of course, that a developer would need the added space and power to install a second GTX 980 Ti or Titan X.