AMD is in a strange position in that there is a lot of excitement about their upcoming Zen architecture, but we are still many months away from that introduction.  AMD obviously needs to keep the dollars flowing in, and part of that means that we get refreshes now and then of current products.  The “Kaveri” products that have been powering the latest APUs from AMD have received one of those refreshes.  AMD has done some redesigning of the chip and tweaked the process technology used to manufacture them.  The resulting product is the “Godavari” refresh that offers slightly higher clockspeeds as well as better overall power efficiency as compared to the previous “Kaveri” products.

One of the first refreshes was the A8-7670K that hit the ground in November of 2015.  This is a slightly cut down part that features 6 GPU compute units vs. the 8 that a fully enabled Godavari chip has.  This continues to be a FM2+ based chip with a 95 watt TDP.  The clockspeed of this part goes from 3.6 GHz to 3.9 GHz.  The GPU portion runs at the same 757 MHz that the original A10-7850K ran at.  It is interesting to note that it is still a 95 watt TDP part with essentially the same clockspeeds as the 7850K, but with two fewer GPU compute units.

The other product being covered here is a bit more interesting.  The A10-7860K looks to be a larger improvement from the previous 7850K in terms of power and performance.  It shares the same CPU clockspeed range as the 7850K (3.6 GHz to 3.9 GHz), but improves upon the GPU clockspeed by hitting around 800 MHz.  At first this seems underwhelming until we realize that AMD has lowered the TDP from 95 watts down to 65 watts.  Less power consumed and less heat produced for the same performance from the CPU side and improved performance from the GPU seems like a nice advance. 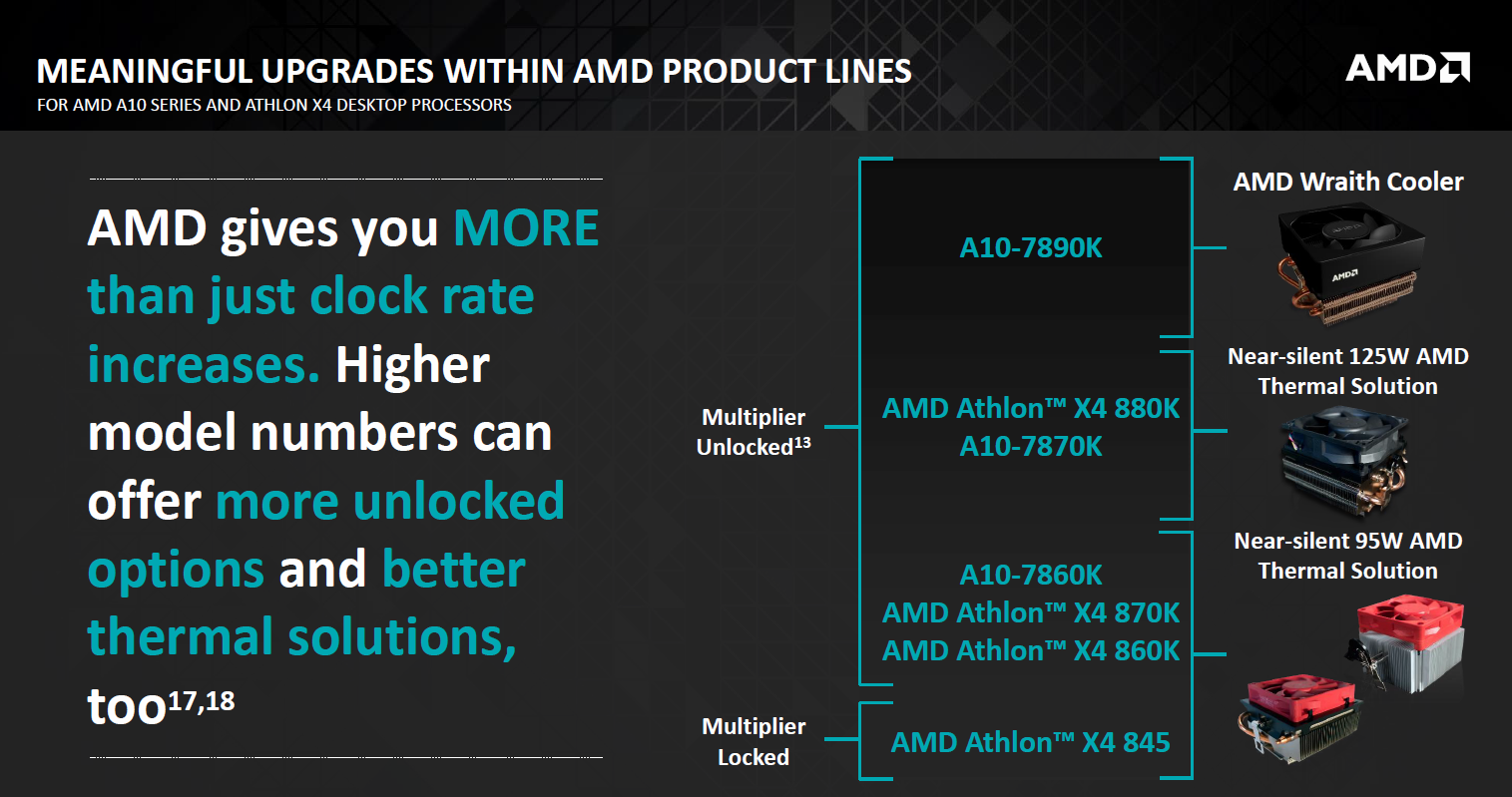 AMD continues to utilize GLOBALFOUNDRIES 28 nm Bulk/HKMG process for their latest APUs and will continue to do so until Zen is released late this year.  This is not the same 28 nm process that we were introduced to over four years ago.  Over that time improvements have been made to improve yields and bins, as well as optimize power and clockspeed.  GF also can adjust the process on a per batch basis to improve certain aspects of a design (higher speed, more leakage, lower power, etc.).  They cannot produce miracles though.  Do not expect 22 nm FinFET performance or density with these latest AMD products.  Those kinds of improvements will show up with Samsung/GF’s 14nm LPP and TSMC’s 16nm FF+ lines.  While AMD will be introducing GPUs on 14nm LPP this summer, the Zen launch in late 2016 will be the first AMD CPU to utilize that advanced process.

Godavari is otherwise unchanged from Kaveri in terms of advanced feature support.  It is only when it comes to power and speed that Godavari looks to improve upon what we previously had with Kaveri.  These are still two module/four core units with the shared FPU/MMX/SSE/AVX functionality.  Each module features 2 MB of L2 cache (total of 4 MB on die) and 256 KB of L1 cache.  The memory controller officially supports DDR-3 speeds up to 2133 MHz effective with unofficial support for DDR-3 2400 modules (depending on the motherboard).

These chips still utilize the FM2+ socket architecture.  AM4 may be the socket of the future for AMD, but until those get released later this summer the FM2+ stable of motherboards will have to do.  This is not a bad thing as they are typically feature complete and relatively inexpensive as compared to some of the midrange and top end Intel products.  In this case a decent AMD FM2+ board will go between $70 and $149.  A Z170 will go from $90 to above $200.

These chips feature the latest PCI-E 3.0 technology and allow a maximum of 2 x 8x PCI-E 3.0 connections.  So far most motherboard manufacturers have included CrossFire support with FM2+ products, but none that I am aware of are licensed for SLI.  The amount of people buying FM2+ parts to power multi-GPU systems is likely quite small.

AMD identified a weakness in their lineup as well as an area that Intel has overlooked or ignored.  Quiet and cool computing is an advantage and AMD is spending a few extra dollars here as compared to their competition to provide a better overall solution. 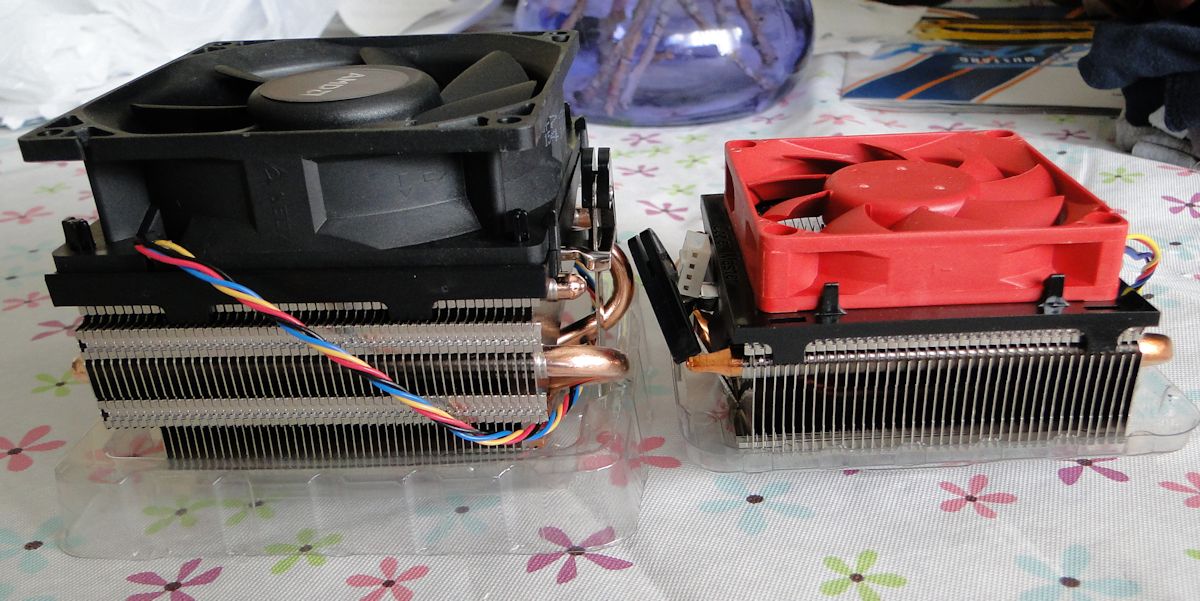 The "Wraith" cooler without shroud is still a lot bigger than the 95 watt unit on the right.

The AMD Wraith cooler is a large, shrouded cooler with LED lighting and is rated at 125 watts dissipation.  The constant speed fan keeps things cool under all loads without ramping up speed and causing annoyance.  This cooler has an expanded range of CPUs that it is bundled with, but neither of the APUs present today feature it.  There is a cut down version of Wraith that removes the shroud and LED lighting, but it is the same overall hardware.  This is also a 125 watt dissipation unit that stays very cool and quiet.  This is included with some models like the Athlon X4 880K. 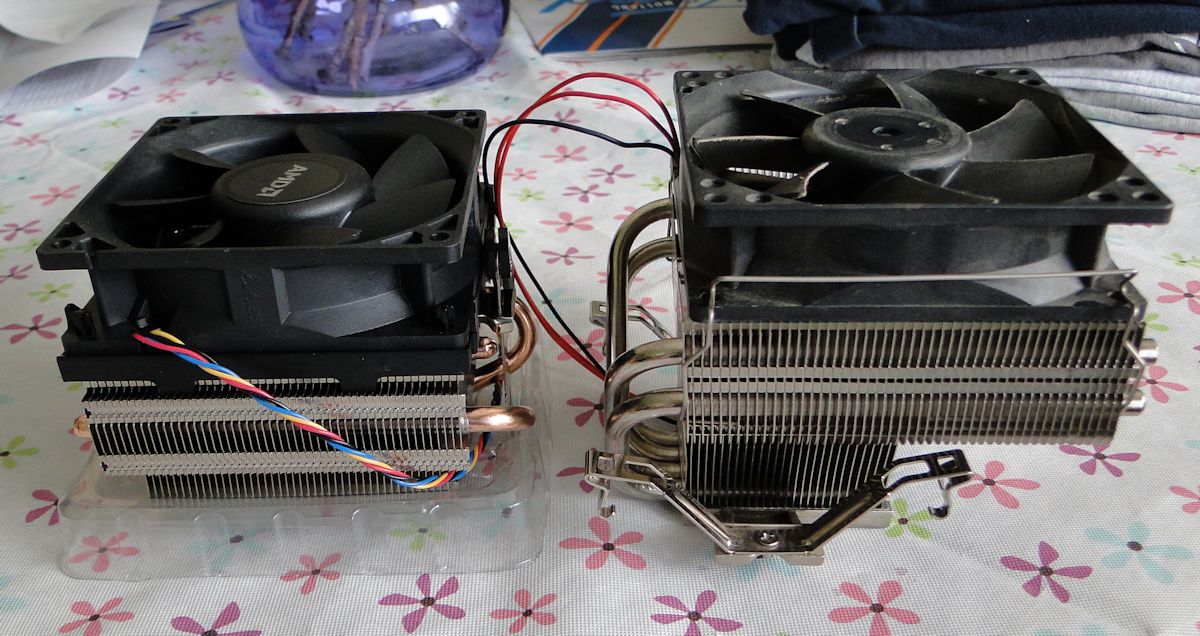 The Wraith is then looking quite smaller against what I used to overclock these chips.

The last updated cooler does not have a fancy name, but it is a 95 watt dissipation unit that is bundled with these two new APUs.  It does not have the elaborate shroud or LED lighting, but it is larger and more complex than the previous bundled APU heatsinks.  It provides more than enough cooling for both the 7670K and 7860K.  It is not going to turn heads with its looks, but the red fan assembly catches the eye a bit.  Of course, the best part is that it keeps these products cool without creating a lot of extra noise. 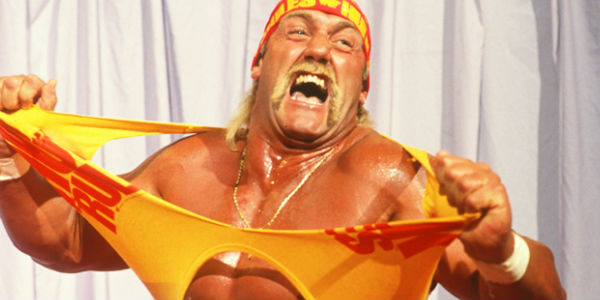 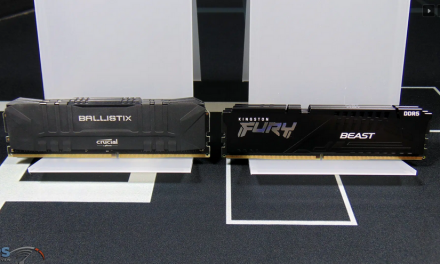