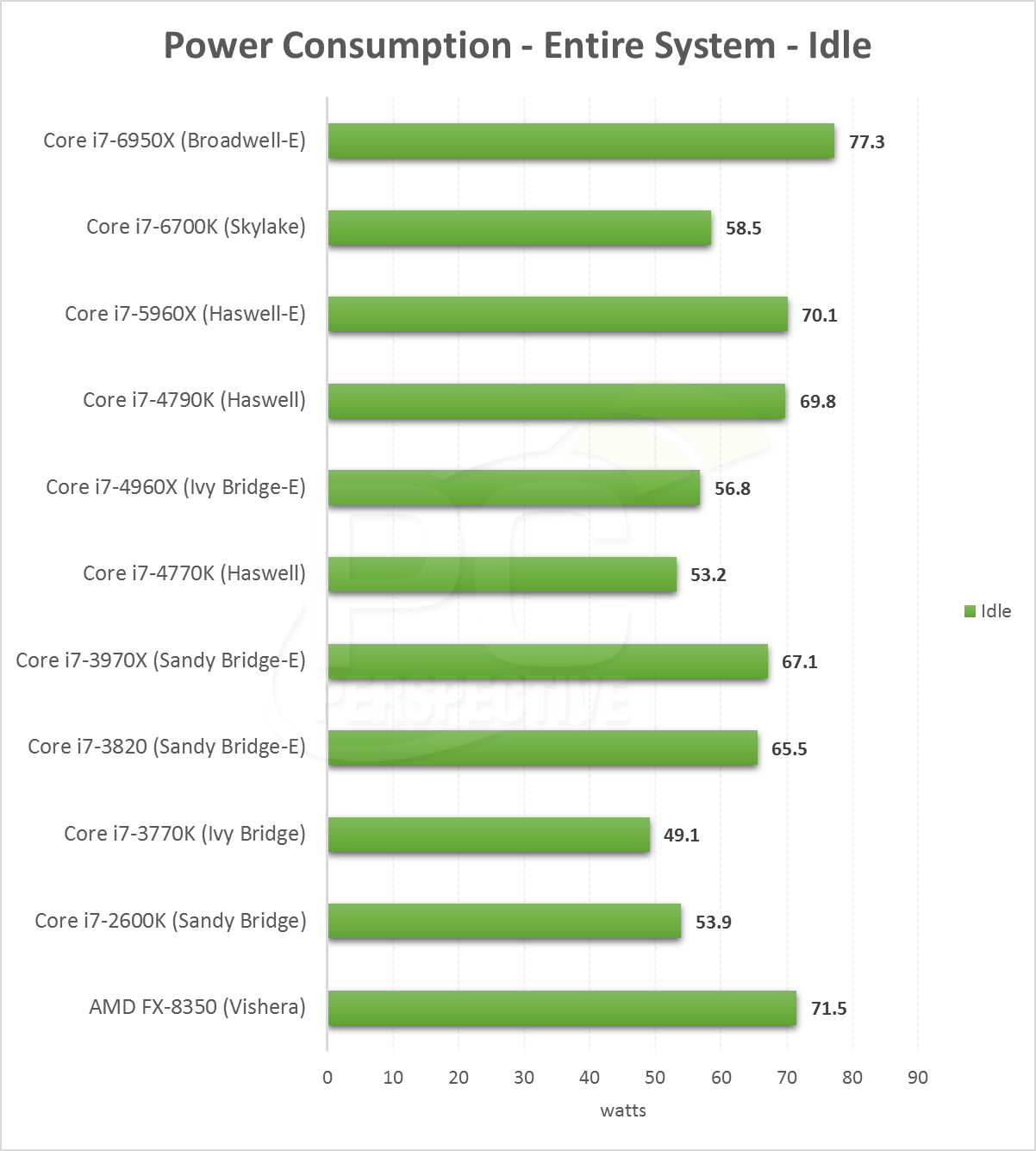 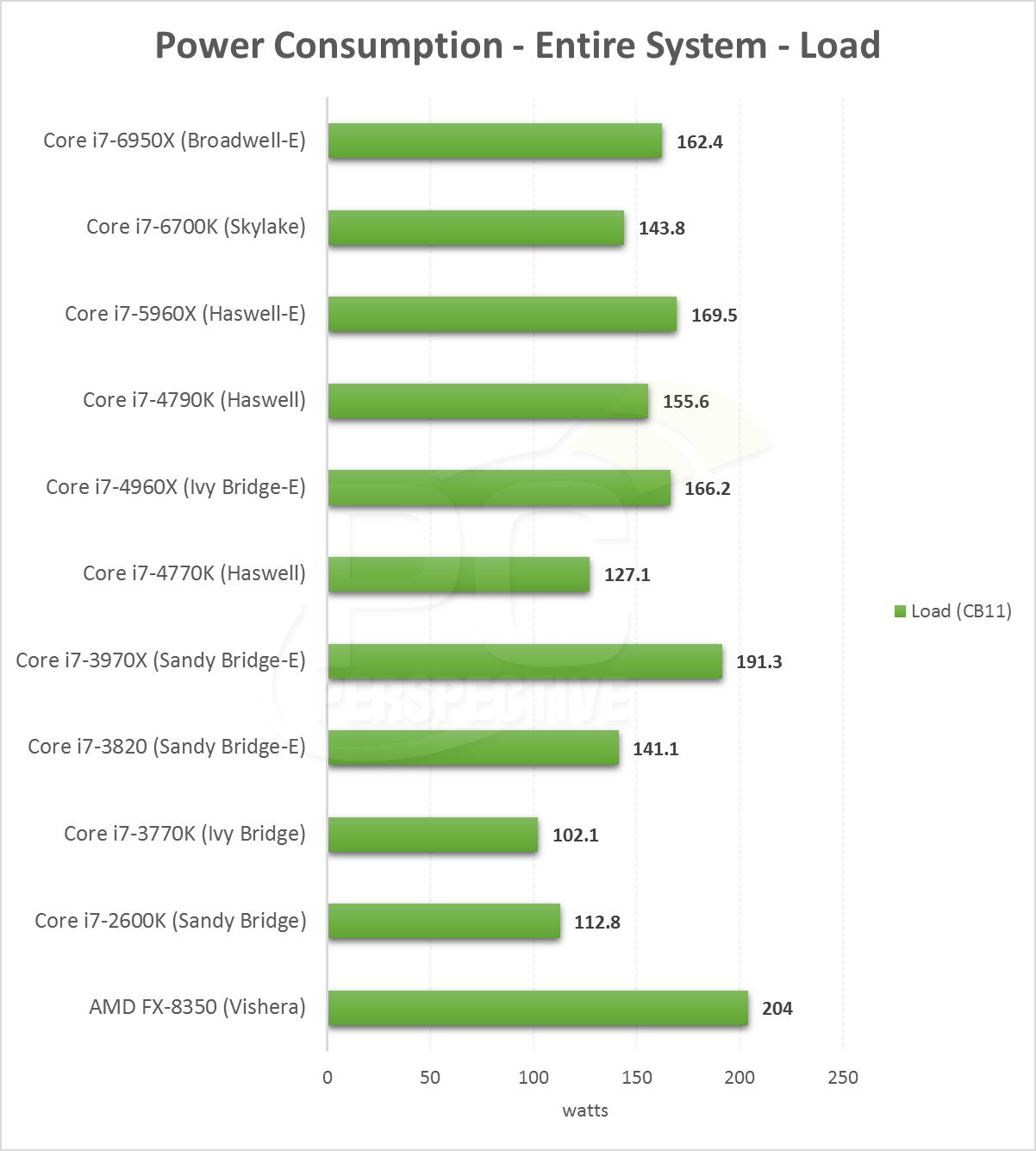 Idle power on the 6950X is slightly higher, but a few watts may be the result of a motherboard change from Haswell-E to Broadwell-E. The load numbers are really what we're after anyway, and here the 14nm process technology is proving to be extremely valuable. When running all 10-cores in CineBench, the 6950X system pulls 7 watts LESS than the 8-core 5960X based system! There is maybe an even more impressive result from the comparison to the 6700K, which actually is only pulling 20 watts less power under a full load. Consider the performance deltas we saw in multi-threaded applications on the previous pages and that is an impressive power efficiency result for Intel! 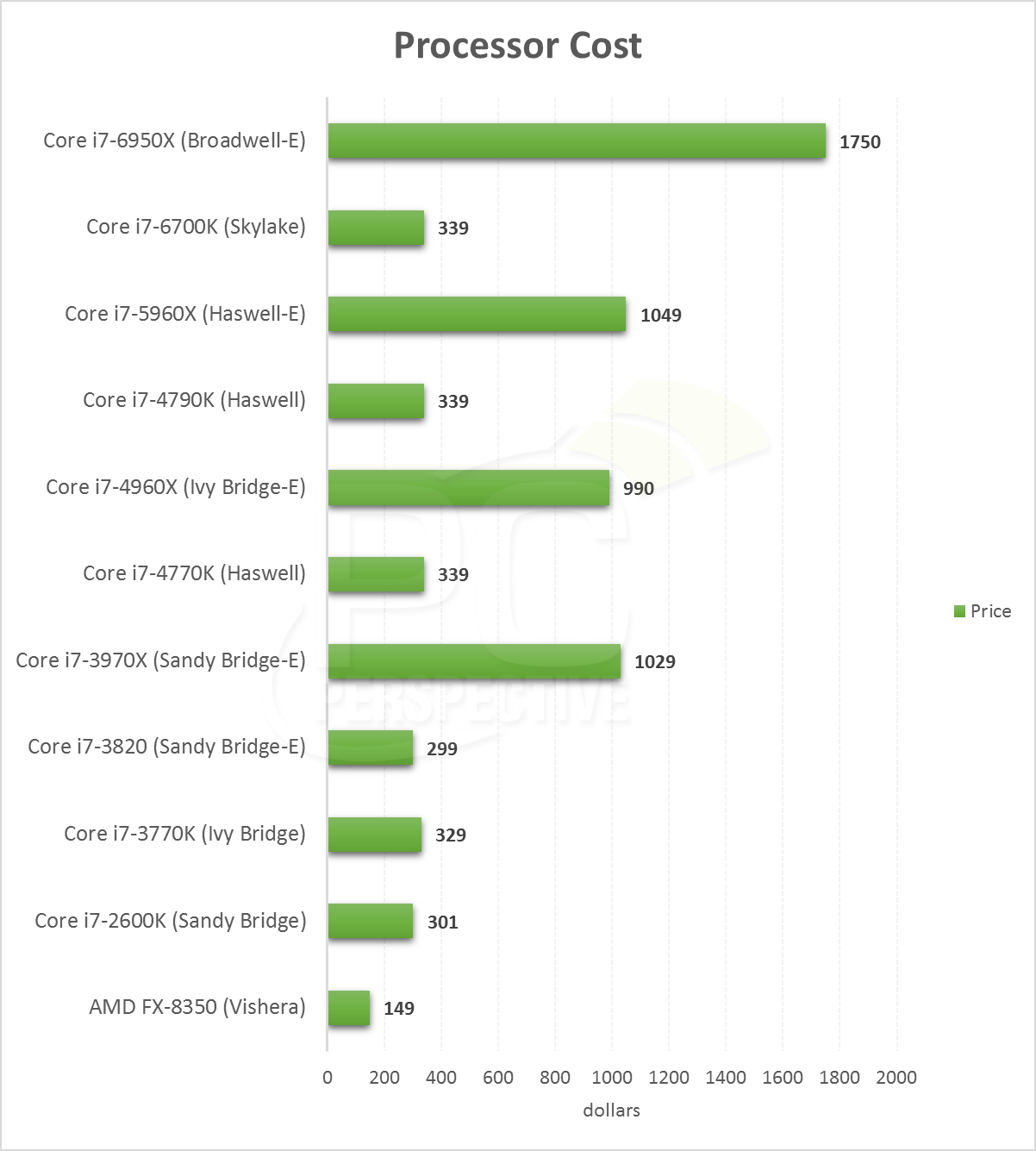 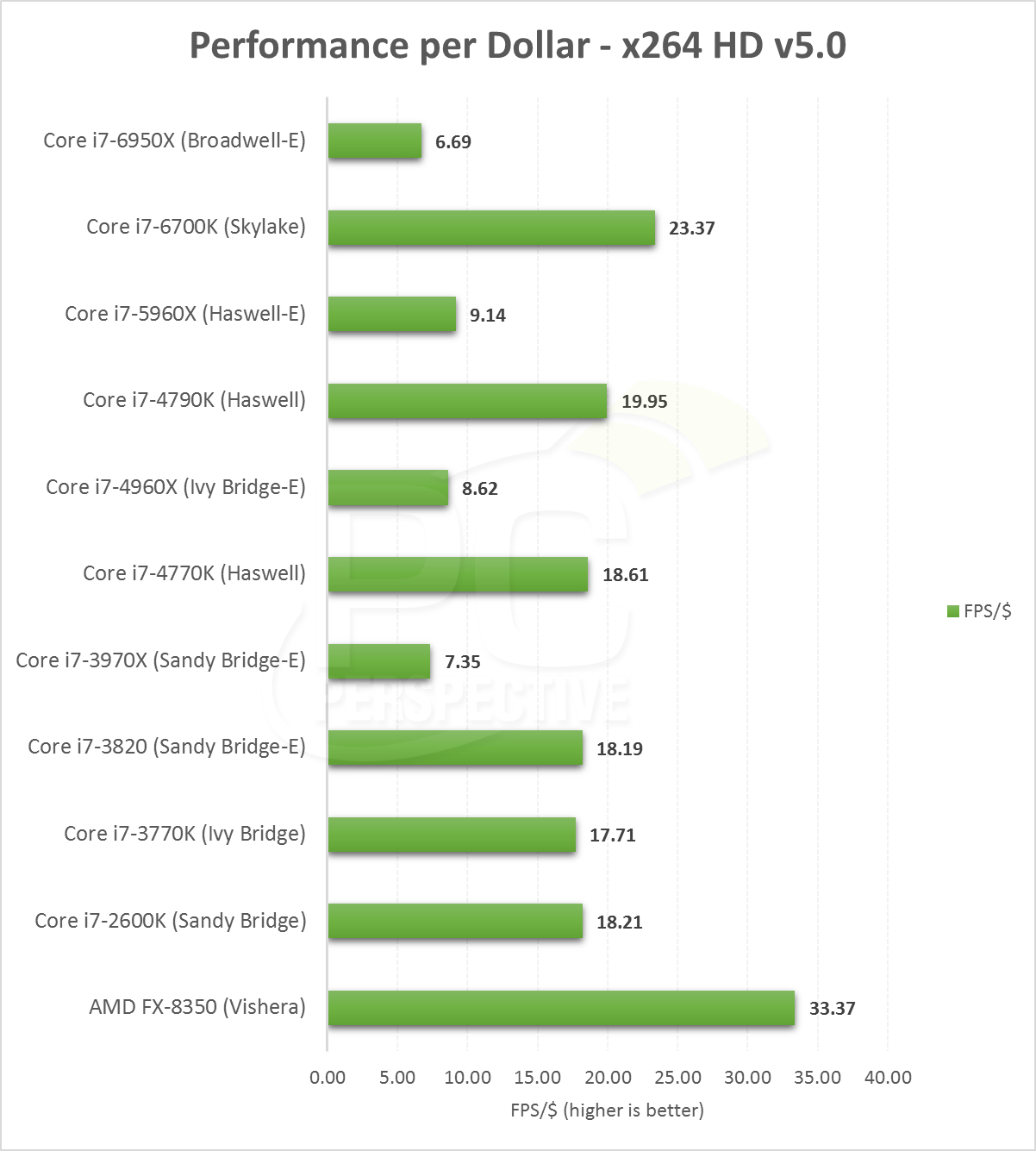 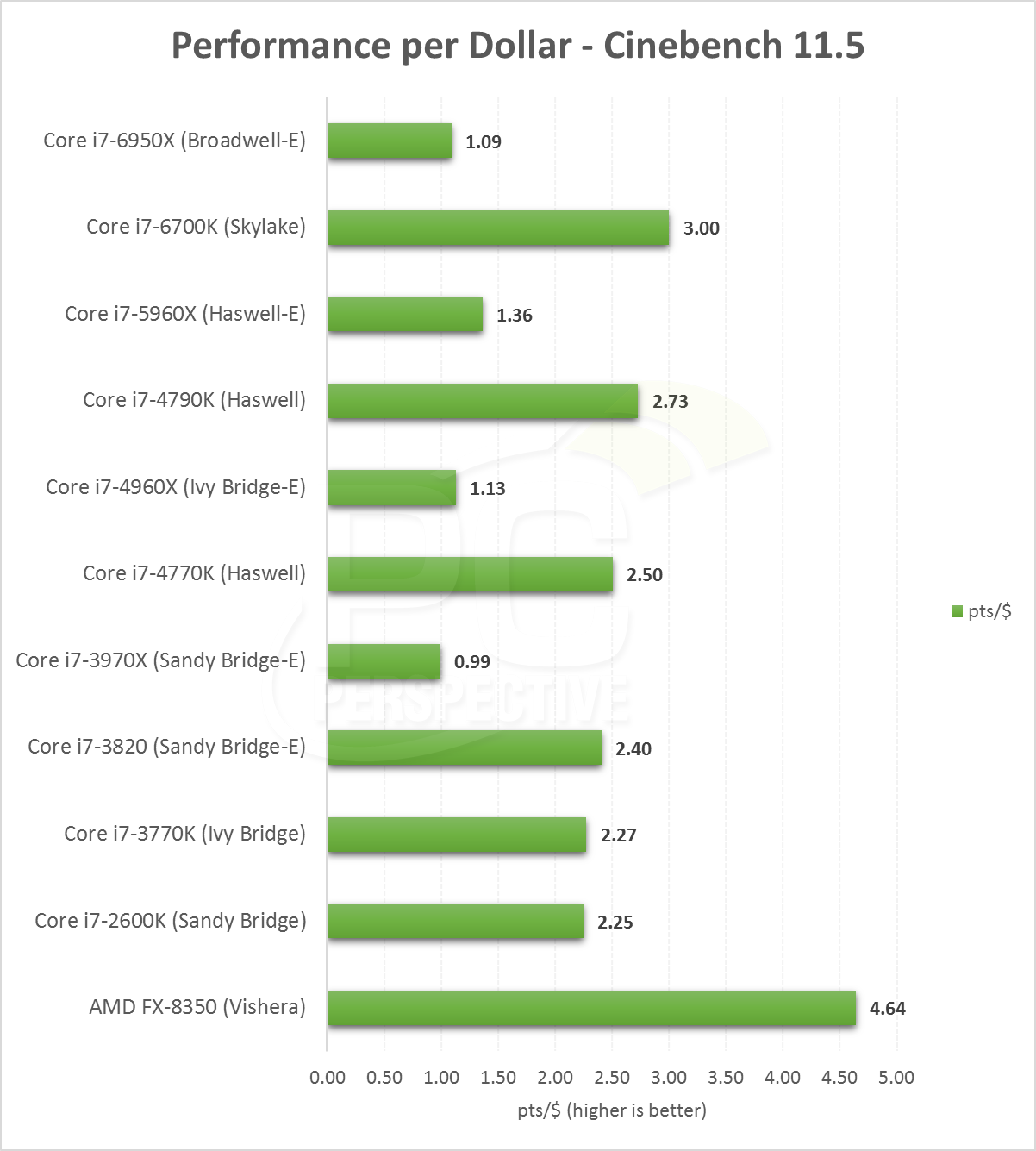 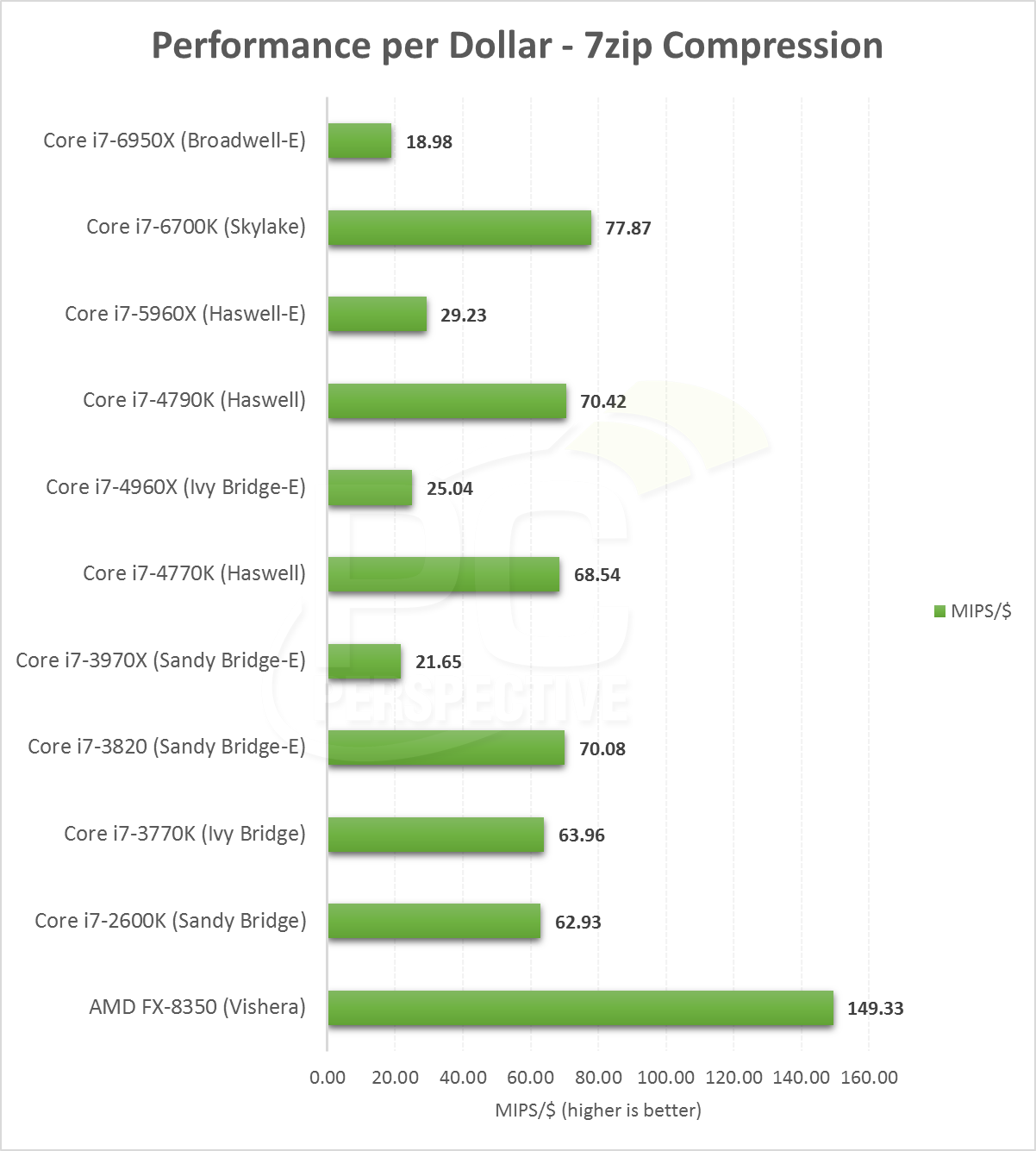 As impressive as the Core i7-6950X was in terms of raw performance and compute power, it is as equally unimpressive in terms of value for your dollar. Honestly, this was expected, and has always been the case for Intel's Extreme Edition processors. That was the case at the $1000 price point, but it is exacerbated even more dramatically with a $1700+ price tag on the new 6950X.

Side note: look at the performance per dollar of the AMD FX-8350!

There isn’t much more to add here on the discussion of price. The Core i7-6950X is over $1700 and you should really only be considering that part if you are an extreme multi-tasker or professional developer that can really utilize all 10-cores and utilize them often. The new $1000 part will be the Core i7-6900K, sharing an 8-core design with the Core i7-5960X of Haswell-E. The two 6-core options will be in the $430-650 range. If you need more than four cores to feel comfortable with your particular workload then I would recommend those options; PC gamers that aren’t also doing encoding, streaming, and capturing simultaneously need not apply for this 10-core beast!

Complicating the price story from Intel as well is the fact that the Xeon E5-2640 v4 processor exists. This is a 10-core / 20-thread processor with 25MB of cache that uses the same LGA2011-v3 socket. It does run at a lower base clock rate of 2.4 GHz, but it has the same Turbo Boost clock rate of 3.4 GHz compared to the Core i7-6950X. Heck, it even has a lower TDP at just 90 watts! You can find this processor selling for just $939; it's a grey market part, but you would save nearly $800 if you are willing to drop some of the frequency of the Core i7-6950X.

The Broadwell-E processors should be in the channel in June and the newly updated X99 motherboards are already widely available.

First, let’s talk about the positive side of the Core i7-6950X. It is clearly, and without a shred of doubt, the fastest consumer processor on the market. With the inclusion of Turbo Boost Max Technology 3.0, Intel was able to improve single-threaded performance enough to keep it within striking distance of the Core i7-6700K using Skylake, all while jamming in 10-cores for maximum performance on multi-threaded workloads. If you do video rendering, encoding or 3D work, the processing capability of this CPU will be a godsend. It’s also great that it still uses the X99 chipset, and most motherboards that exist will support the new Broadwell-E processors with only a firmware update. 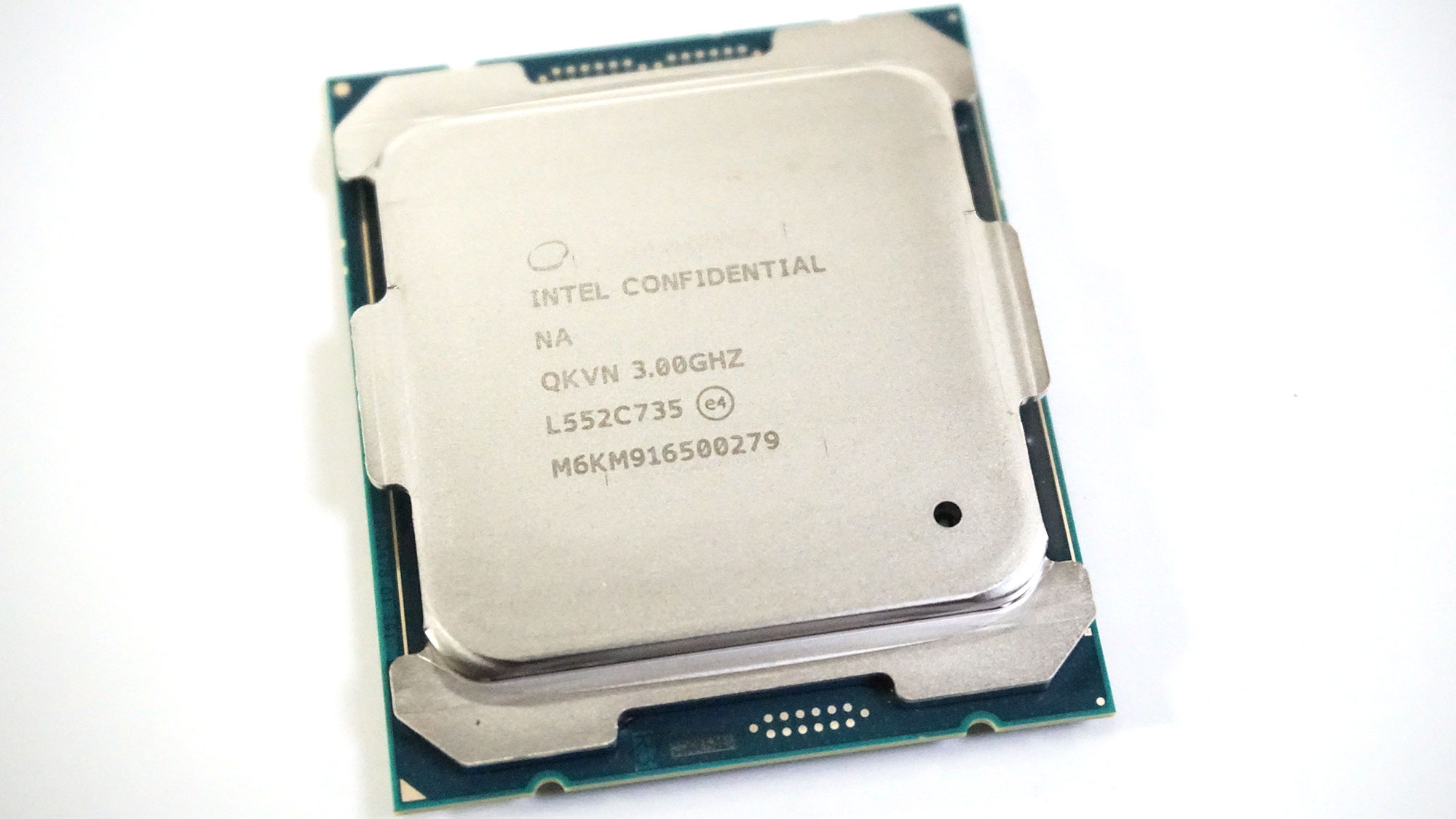 Now, to the negative: PRICE! Intel had no solid answer as to why the company decided to charge as much for the 10-cores of the 6950X as they are, even when it was pointed out that the move from 6-core to 8-cores did not result in any kind of similar price hike. For a consumer processor, even a pro-sumer / power user, $1000 seems like a reasonable cap for prices; it was already more than we recommended for 95% of users so it’s hard to see this $1700 price point making it into anything other than our Dream system on the Leaderboard! Obviously every company is allowed to charge whatever they want for their products, I just don’t think the user base is prepared to pay it – even with the incredible performance it provides. 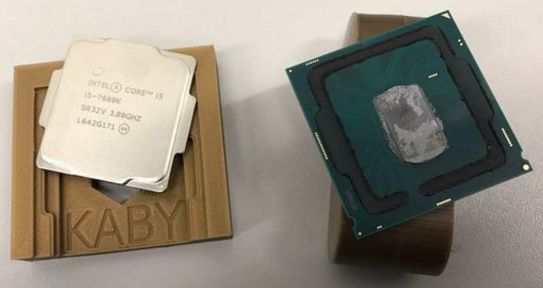