Let the debate of Founders Edition versus reference cards continue! Just like we saw with the GTX 1080 launch, the GeForce GTX 1070 will start its life in the form of the new NVIDIA Founders Edition, a card that is more or less equivalent to the reference designs in previous generational releases, though NVIDIA intends to sell this card and design directly and to partners for the lifetime of the generation. 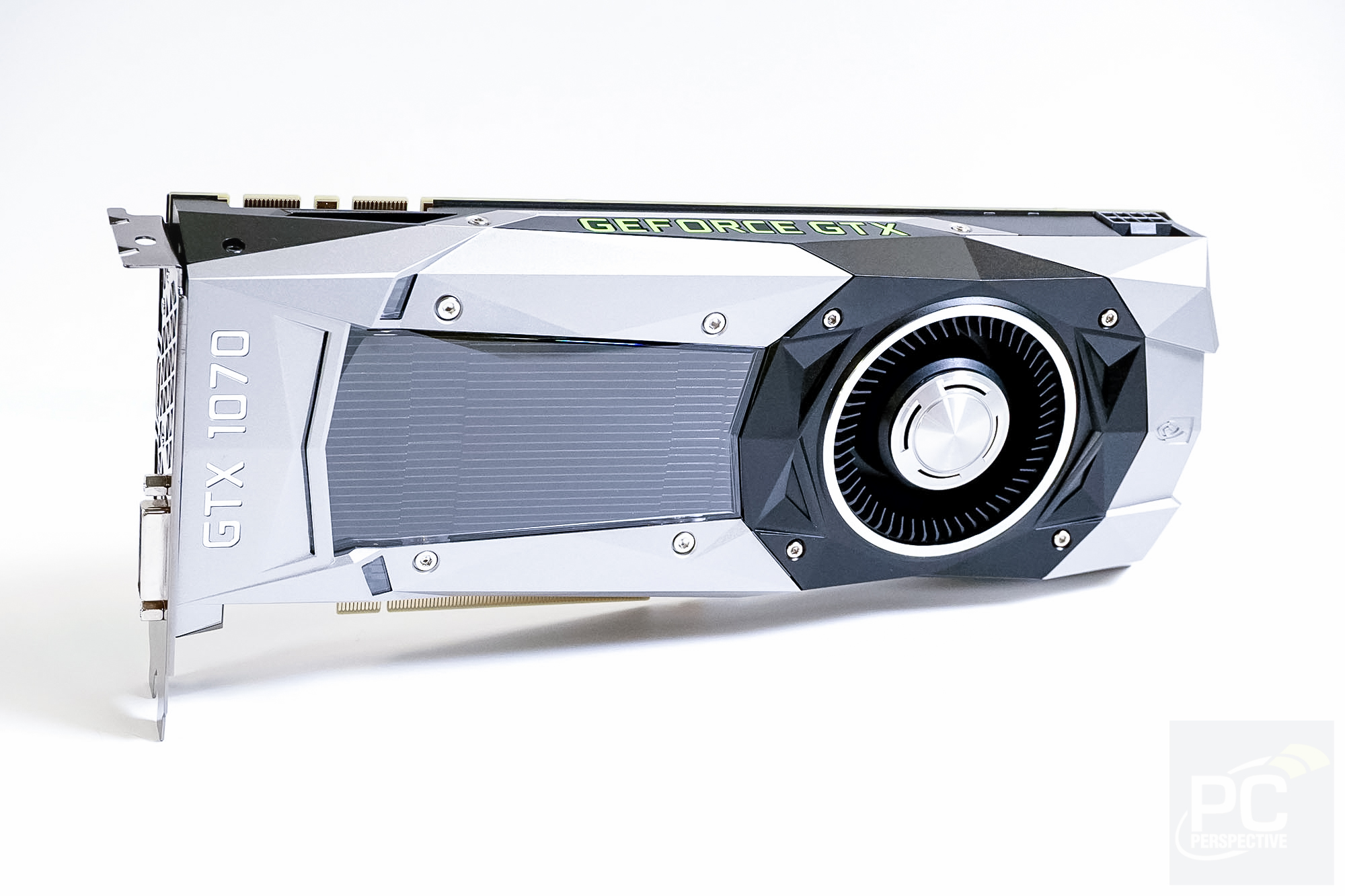 Stylistically, the GTX 1070 looks identical to the GTX 1080 – same shroud, same length, same back plate, just a different number at the face of it. There are some changes though from a board design and cooler design we should note. The GeForce GTX 1070 Founders Edition is only a 4-phase power design, compared to the 5-phase on the GTX 1080. 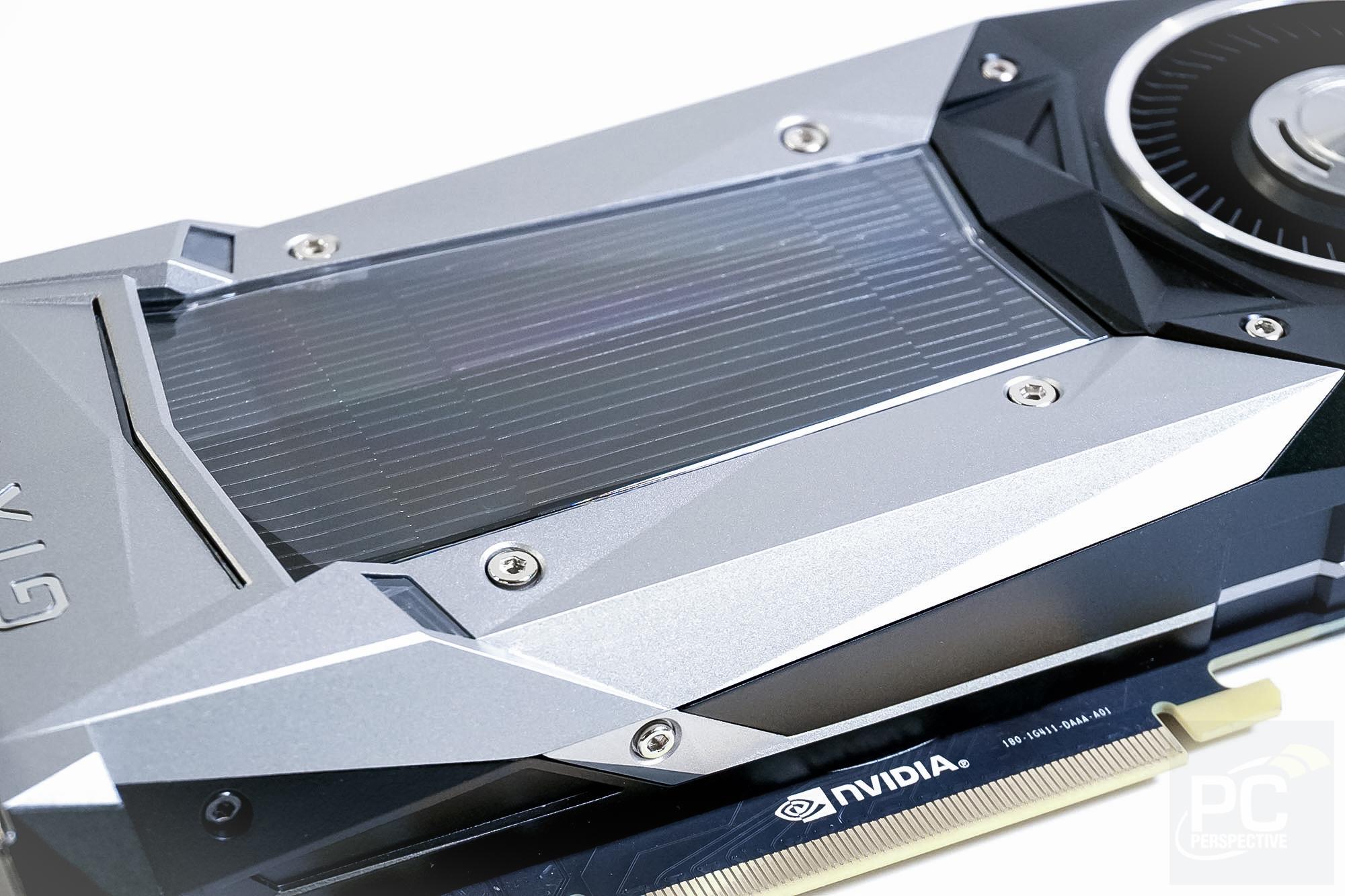 The cooler is the other big change – this is a heatsink and triple heatpipe based design rather than vapor chamber. All that really means is that we expect the fan to have to spin slightly faster (and thus be slightly louder) to keep the GPU at its rated ~83C temperature at stock settings. 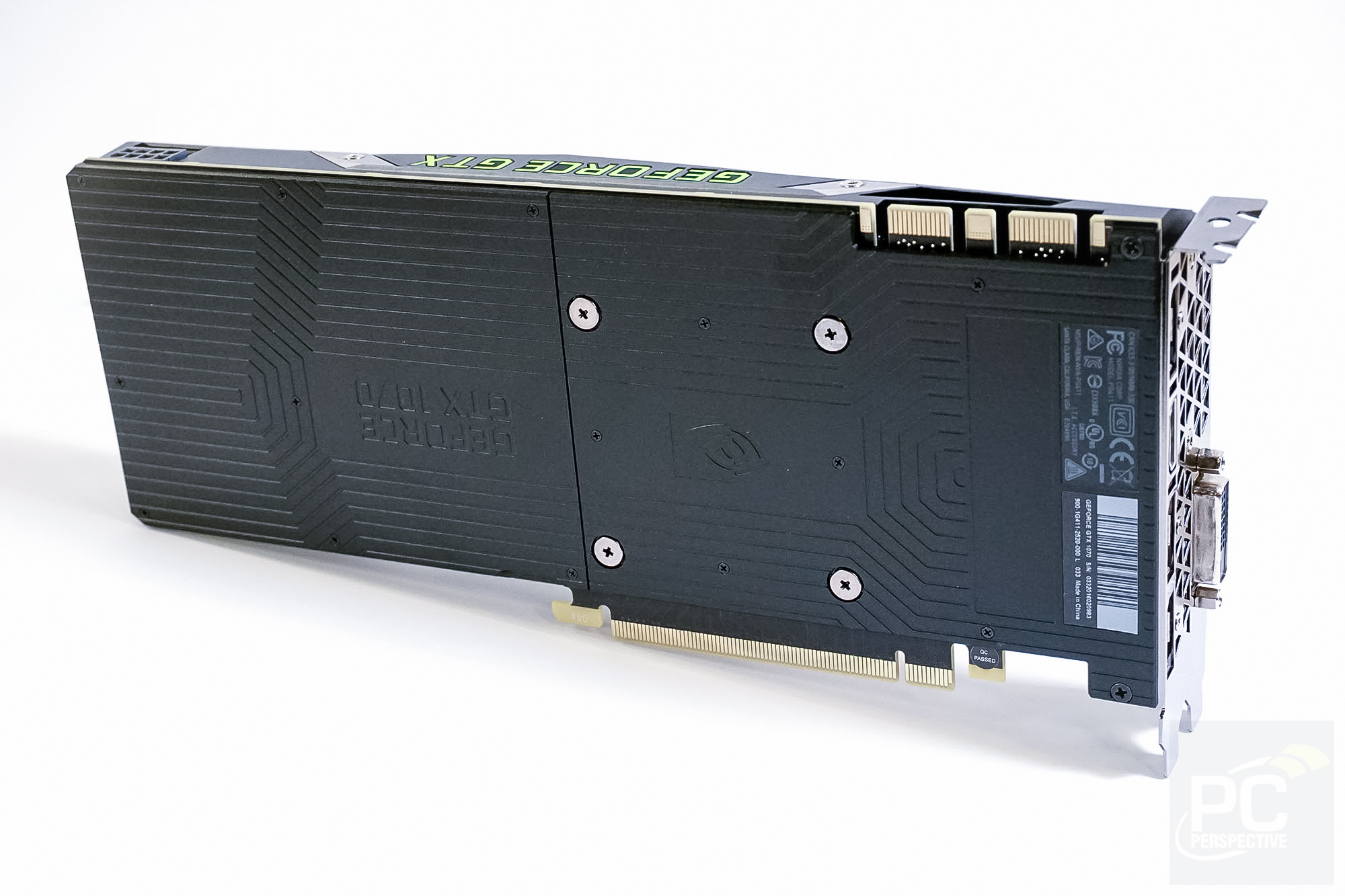 NVIDIA wisely kept the dual partition backplate on the GTX 1070 FE, with the back part removable should you worry about air flow into your top card in a dual-GPU configuration. The SLI connections on the 1070 support the same SLI HB (high bandwidth) bridges announced with the GTX 1080 and are also only recommended for two-card / two-GPU configurations. If you want 3- or 4-Way options, you’ll have to offer up your first child register for an Enthusiast Key.

The top GeForce GTX logo is still going to glow a soft green for you while the 8-pin power connector remains in the same spot. 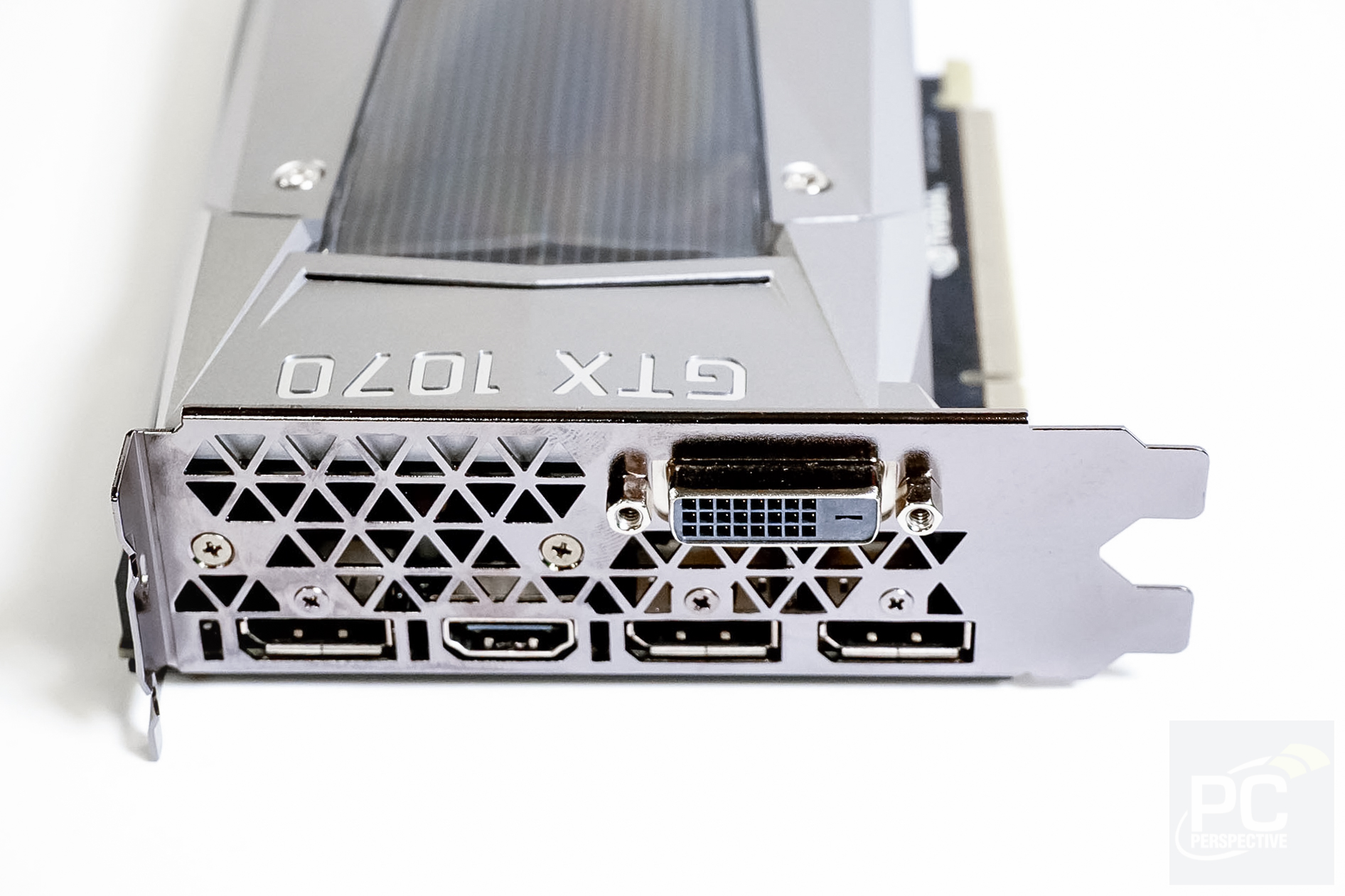 The GeForce GTX 1070 comes with a base clock of 1506 MHz and a rated Boost clock of 1683 MHz. But how does that actually work out in extended gaming? I ran through a 10+ minute loop of Unigine’s Heaven 4.0 benchmark (very GPU heavy obviously) in order to get temperatures stabilized to see where the clock speed of the GTX 1070 landed. 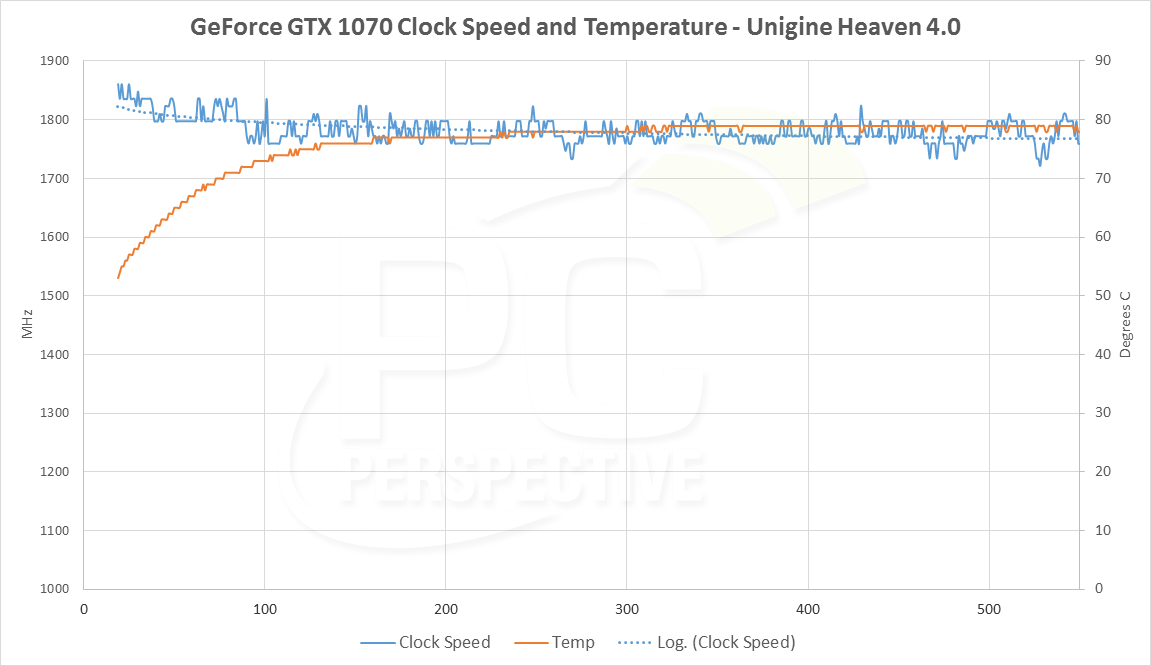 These results are really positive for the GTX 1070; after starting at north of 1850 MHz with a cold GPU at the beginning of the test, we stabilized at around 1775 MHz at the end of our test run. Temperatures normalized at 79C or so, though obviously the fan sped up to keep the GPU in that range. Considering that we were promised Boost clock rate of 1683 MHz, getting ~100 MHz higher than that in a real-world workload is great news for gamers.

Using the latest version of EVGA’s Precision X software, I went through some quick manual overclocking on the GTX 1070 Founders Edition and found promising early results. 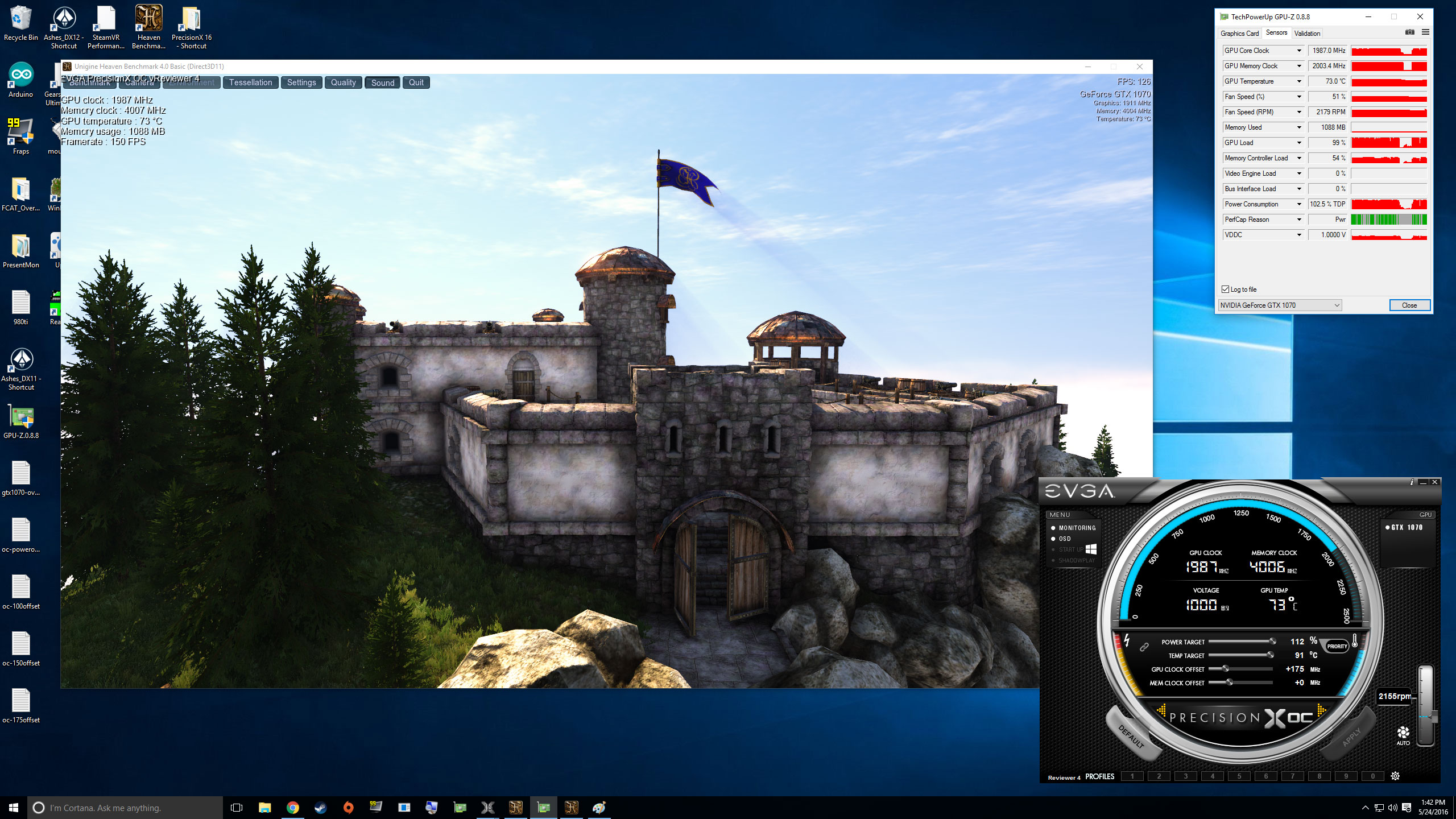 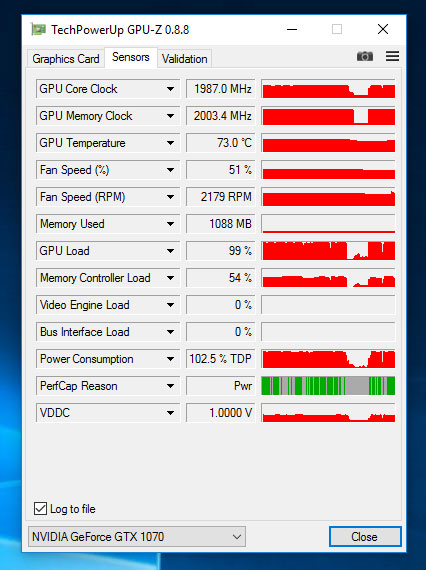 While I was able to run at a +200 MHz offset (with 112% maximum power target) for a few minutes, I settled on a +175 MHz for my stable overclocking, running for well over 30 minutes in Heaven for me without corruption or crashing. The result is a clock speed hovering around 1987 MHz, more than 450 MHz higher than the base clock the card is rated at! Obviously that is going to translate directly into gaming performance in games that are shader limited, as most tend to be.

(Note that I am NOT turning the fan speed up to 100% when doing these overclocking tests – I don’t feel that represents an action an end user would take. A sane end user at least.)