The Founders Edition of the GeForce GTX 1070 is here. Is this your next mid-range card?

It’s only been three weeks since NVIDIA unveiled the GeForce GTX 1080 and GTX 1070 graphics cards at a live streaming event in Austin, TX. But it feels like those two GPUs, one of which hasn't even been reviewed until today, have already drastically shifted the landscape of graphics, VR and PC gaming. 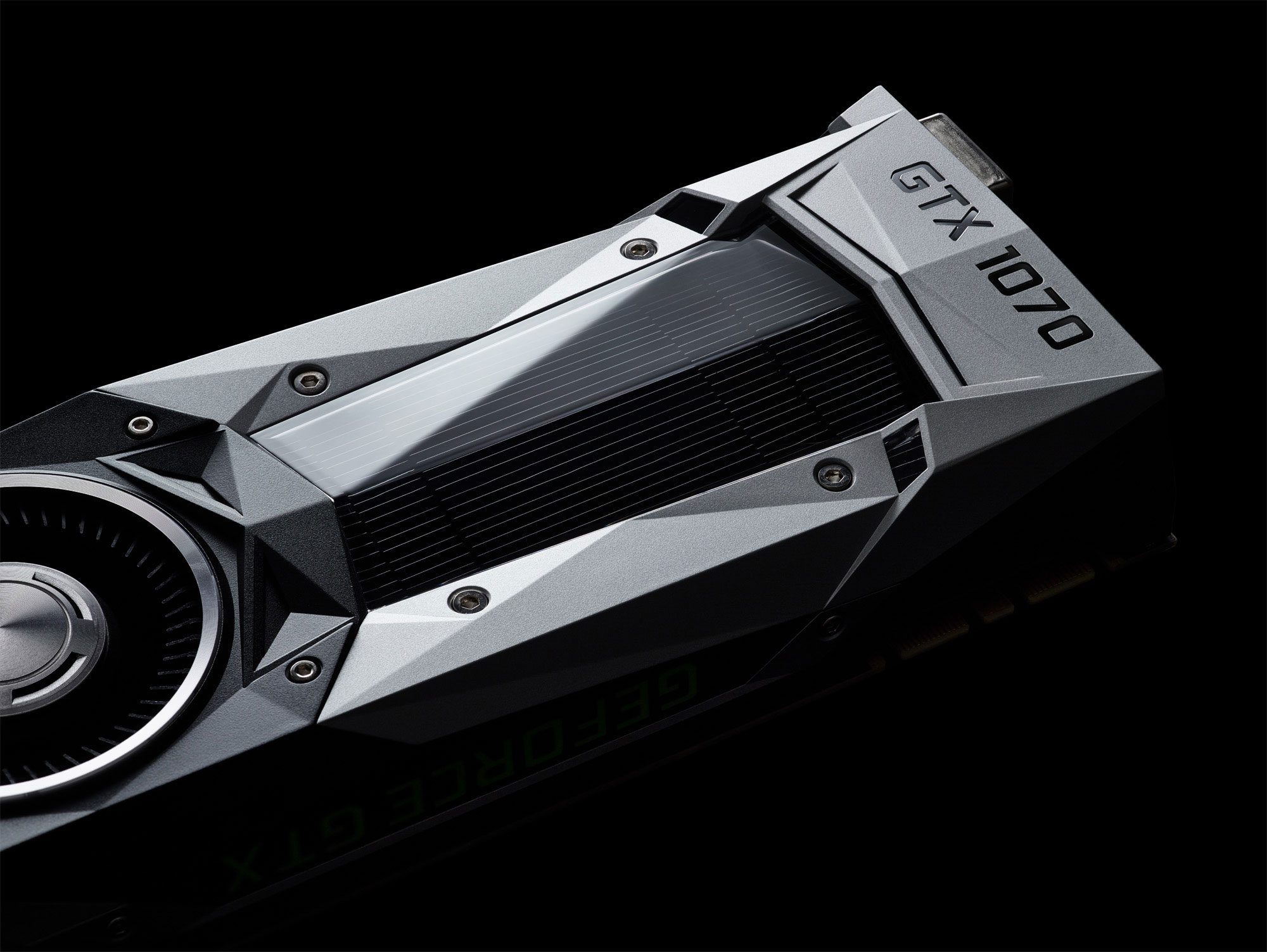 Half of the “new GPU” stories are told, with AMD due to follow up soon with Polaris, but it was clear to anyone watching the enthusiast segment with a hint of history that a line was drawn in the sand that day. There is THEN, and there is NOW. Today’s detailed review of the GeForce GTX 1070 completes NVIDIA’s first wave of NOW products, following closely behind the GeForce GTX 1080.

Interestingly, and in a move that is very uncharacteristic of NVIDIA, detailed specifications of the GeForce GTX 1070 were released on GeForce.com well before today’s reviews. With information on the CUDA core count, clock speeds, and memory bandwidth it was possible to get a solid sense of where the GTX 1070 performed; and I imagine that many of you already did the napkin math to figure that out. There is no more guessing though – reviews and testing are all done, and I think you'll find that the GTX 1070 is as exciting, if not more so, than the GTX 1080 due to the performance and pricing combination that it provides.

The setup for this review is going to be a lot quicker than was the case with the GTX 1080. We already know about the architecture, the new features and how it ticks. At this point, we have only a couple specification changes and a memory swap to worry about.

NVIDIA has reduced the CUDA core / processor count on the GTX 1070 from 2560 to 1920, a drop of 25%. This is actually a bigger drop than the GTX 970 withstood coming from the GTX 980 (~19%) so there is the potential for a larger performance disparity this generation. The 1920 core count is still higher than the GTX 970 (1664), and with a significantly higher clock speed there is no doubt which card is going to be faster.

Texture unit count drops from 160 on the GTX 1080 to 120 on the GTX 1070 thanks to a loss of five SMs. It looks like NVIDIA has disabled one complete GPC rather than disabling SMs piecemeal across the GPU. ROP count remains the same though at 64, and of course the memory bus stays at 256-bit to go along with them. 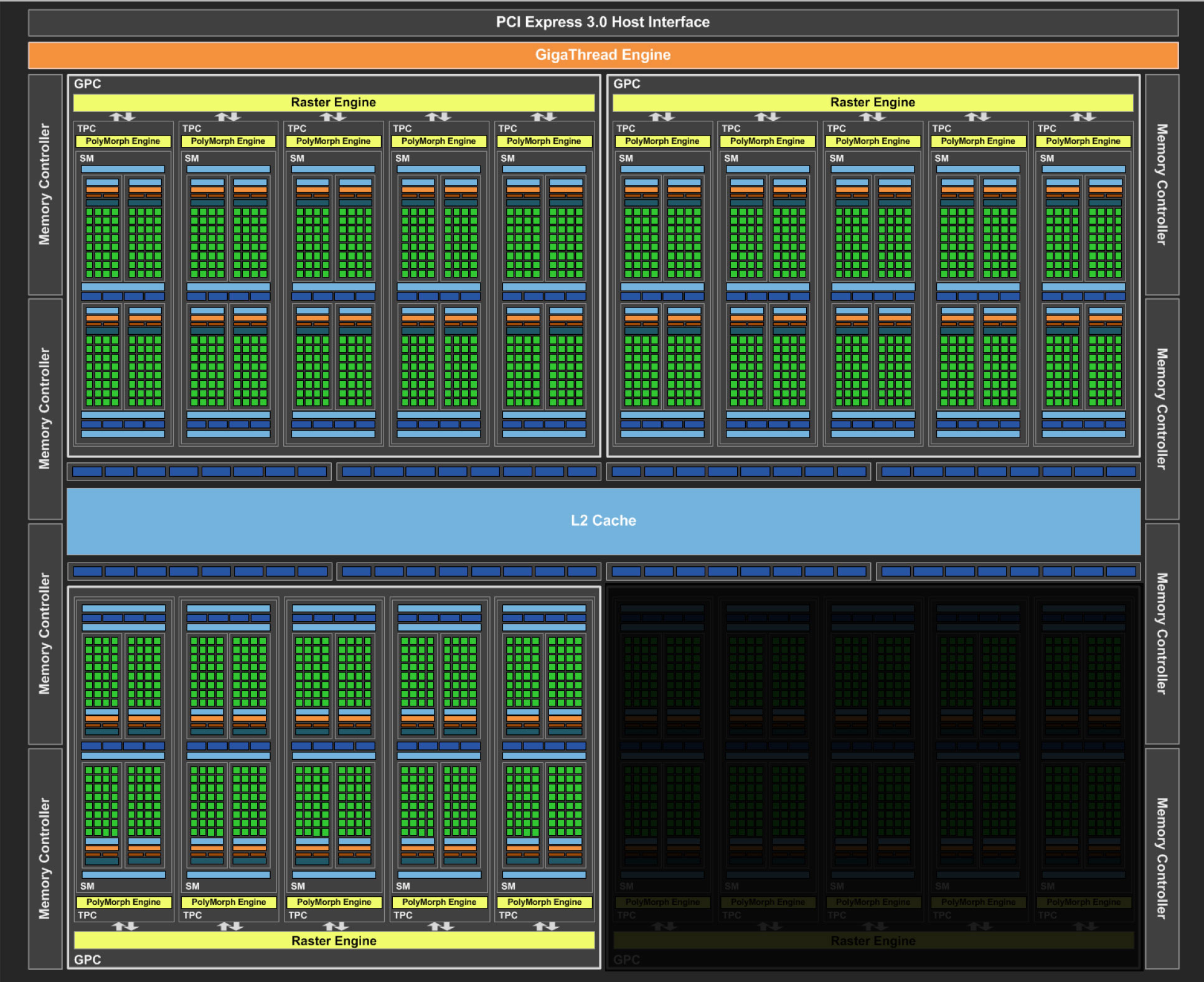 Speaking of the memory controller, even though it is architecturally identical between the two Pascal products, the GTX 1070 is using 8GB of GDDR5 rather than the newer, faster GDDR5X found on the GTX 1080. Frequency is reduced from 10 Gbps to 8 Gbps and memory bandwidth drops from 320 GB/s to 256 GB/s. That being said, this is the first GPU to ship with 8.0 GHz GDDR5 memory, so that is still an increase over the data rate the GTX 980 produced at stock. Couple that with the improved memory compression on Pascal and there shouldn’t be any concern over the memory design on the GTX 1070.

Out of the box clock speeds on the reference / Founders Edition of the GTX 1070 are set at 1506 MHz base, and 1683 MHz Boost. Though they are slightly lower than the GTX 1080, the increase over the GTX 970 is substantial – nearly 50%! Doing the math in your head should already give you a clue to performance: 15% more cores and 50% higher clock rates than the GTX 970 should give the GTX 1070 a big step forward for the price segment compared to Maxwell.

As to power consumption, the GTX 1070 uses 30 watts less than the GTX 1080, with a TDP of 150 watts according to NVIDIA specifications. That is 5 watts higher than the GTX 970, though I imagine any gamer would give up 5 watts for the performance delta we are seeing. Power is again supplied by just a single 8-pin connector.

For both my sanity and yours, I’m not going to attempt to retell the story surrounding Pascal and the GP104 GPU. There are some slight architectural changes including the addition of a new geometry processing block that enables simultaneous multi-projection and some intricate path modifications to allow the 16nm process to reach these kinds of crazy clock speeds, but GP104 exhibits the exact same FLOPS per clock that Maxwell does. 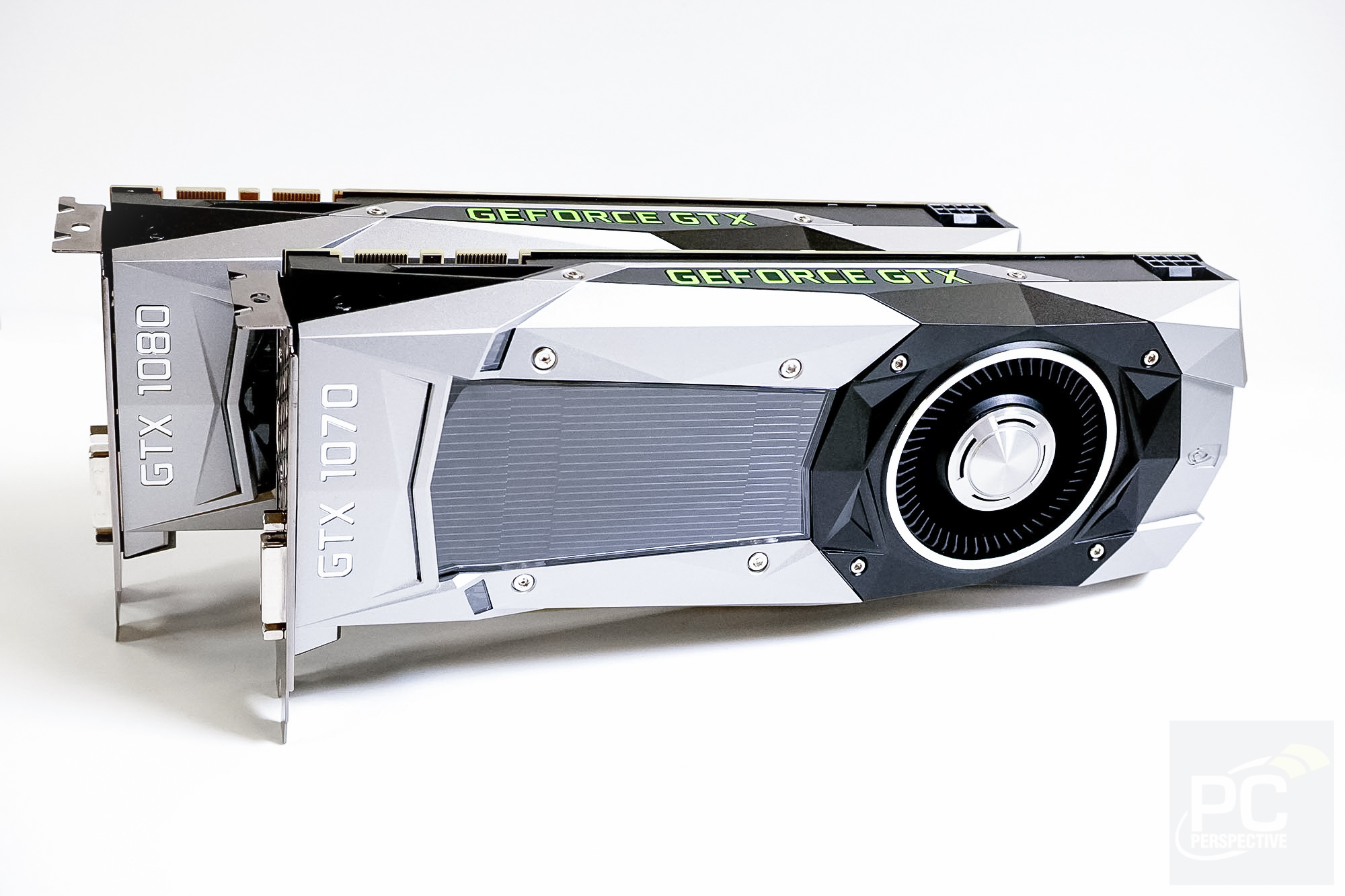 There are several new features supported on Pascal that are worth noting as well, but were covered previously in the review of the GeForce GTX 1080. 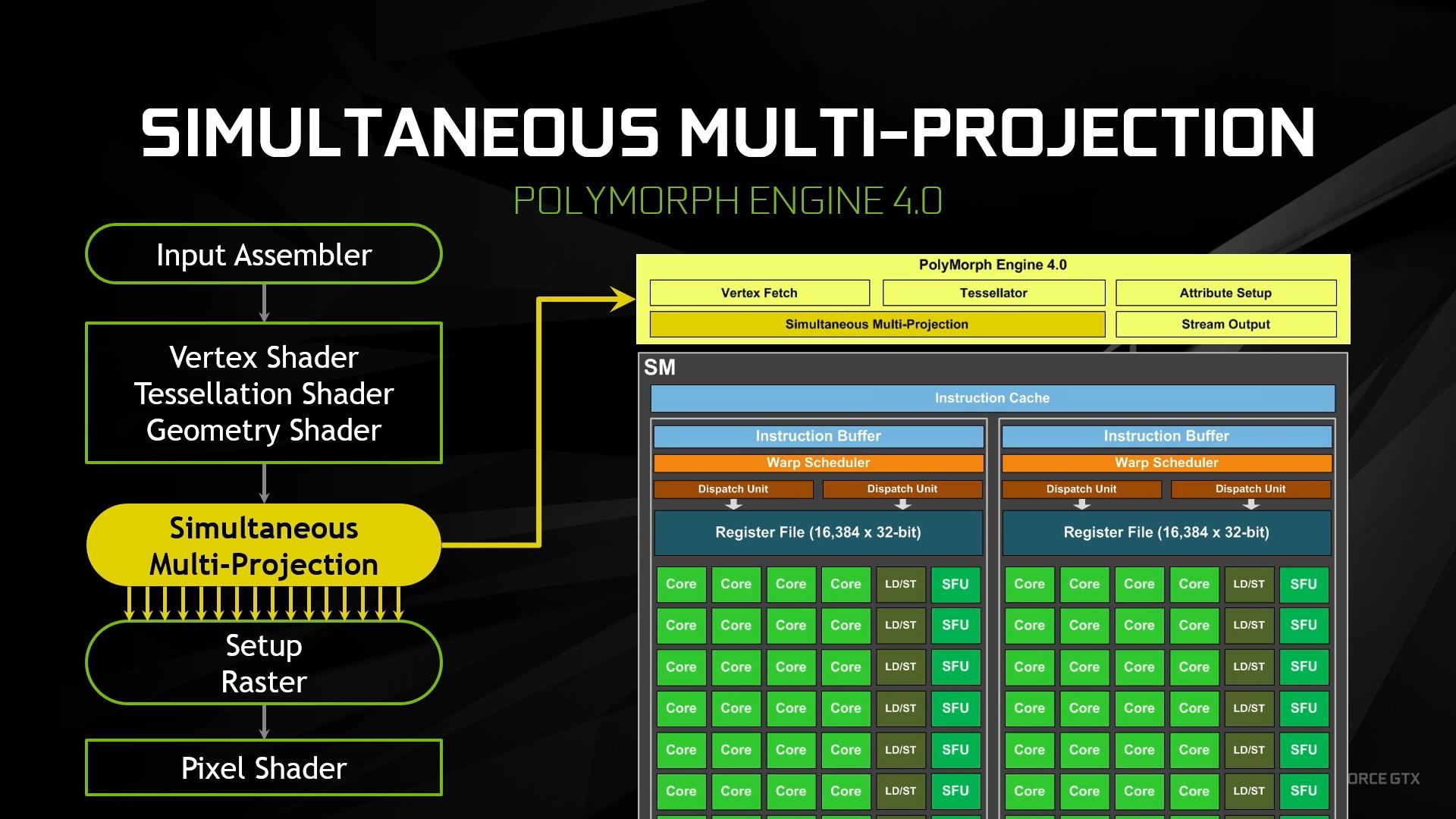 If you haven’t caught up on these technologies I would actually encourage you take a slight detour to those pages linked above and give them a read. They are significant and noteworthy additions to the GeForce product stack and I am particularly excited to try out SMP in some working titles.

(PS – if you want, we interviewed NVIDIA’s Tom Petersen on GTX 1080 launch day during a live video stream and you catch up on the technology via this YouTube playlist alternatively.) 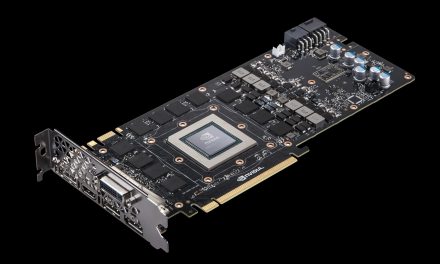 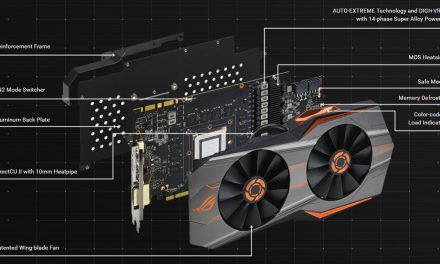