AMD has also implemented a reliability tracker that optimizes performance over the potential lifetime of a chip.  A chip when in use does not physically remain static.  It eventually starts to break down when higher speeds and voltages are applied.  AMD appears to have implemented a “Lifetime Reliability Goal” for an individual product (think a MTBF) and maximizes the clockspeeds and voltages applied to each individual chip.  AMD is able to then keep the clocks high as the filtering mechanism keeps track of potential errors and adjusts the characteristics of that individual die as needed. 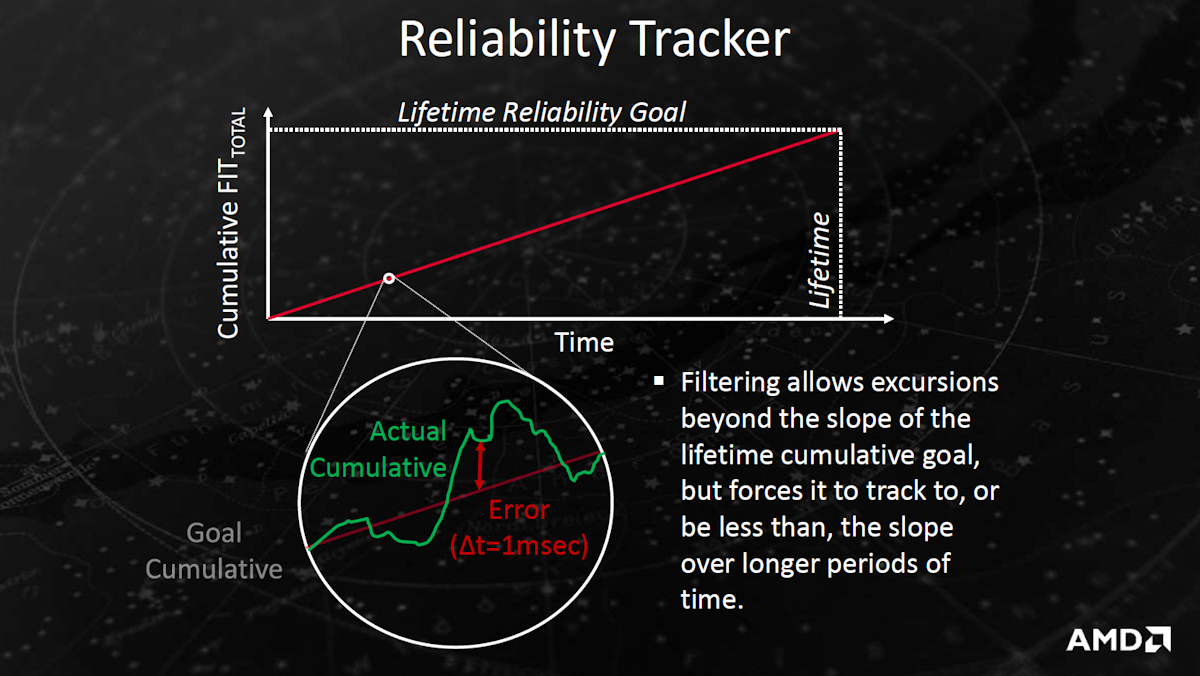 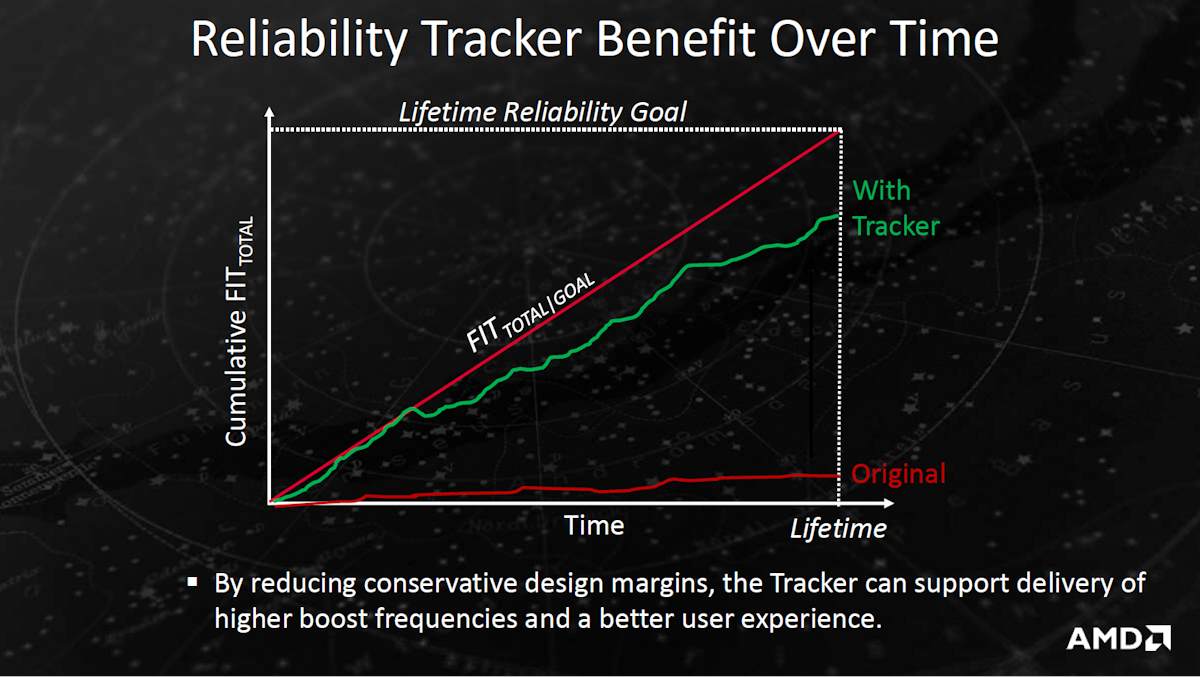 Skin Temperature Aware Power Management is again not new, but we are seeing this in use more and more with mobile devices.  It is able to adjust very quickly the boost of the CPU and GPU in various workloads so that the Tskin value never goes above max and burns the person holding the device.  By dynamically adjust clockspeeds and voltage at a very high rate, longer boost times can be implemented without it getting too hot. 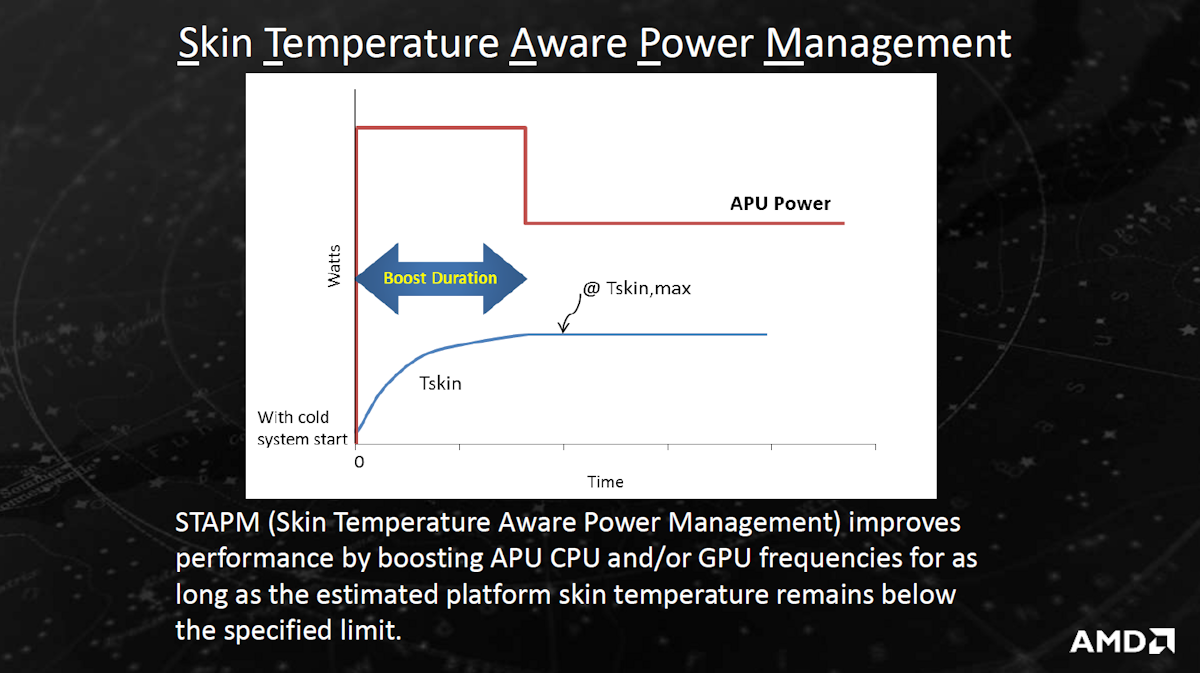 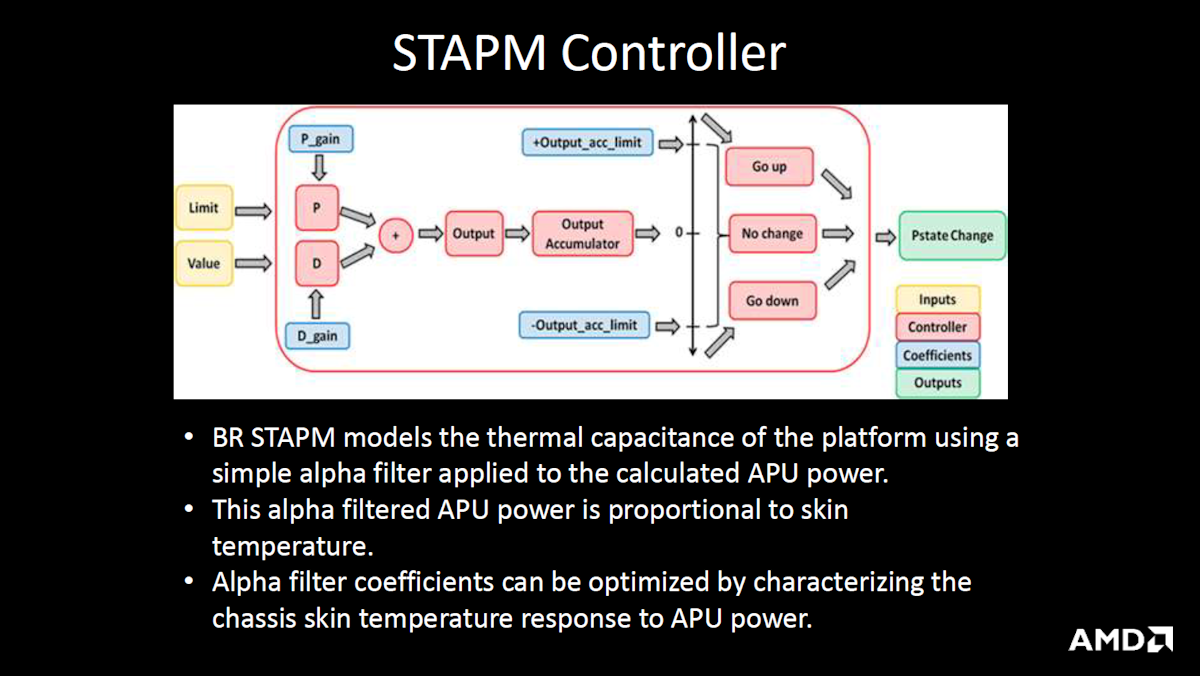 Boot Time Power Supply Calibration is a new one for me.  Apparently at boot the system measures multiple voltage points to determine the state of transistor health in the APU vs. the power supply’s health and output.  It is able to entirely remove the DC guardband (think of it as a safety net of higher power to insure that the APU will function correctly under load) as well as lower the other traditional guardbands.  This allows the voltage control to be more tightly regulated and aggressively lower voltages per chip for reduced power across the board. 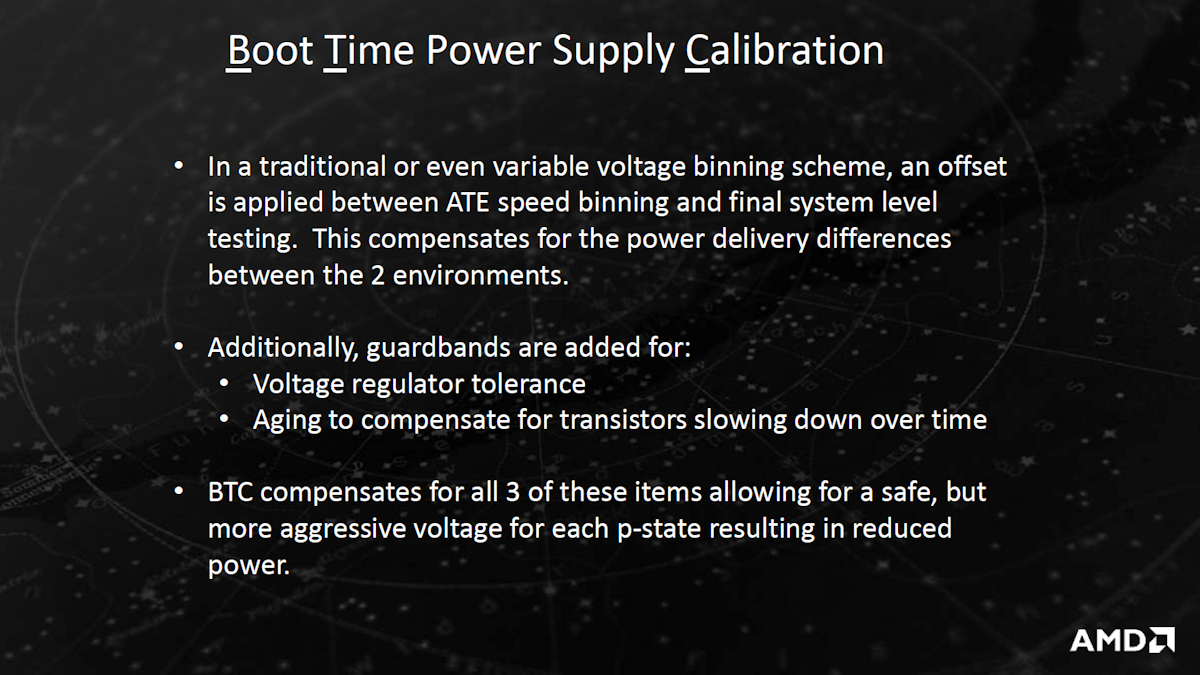 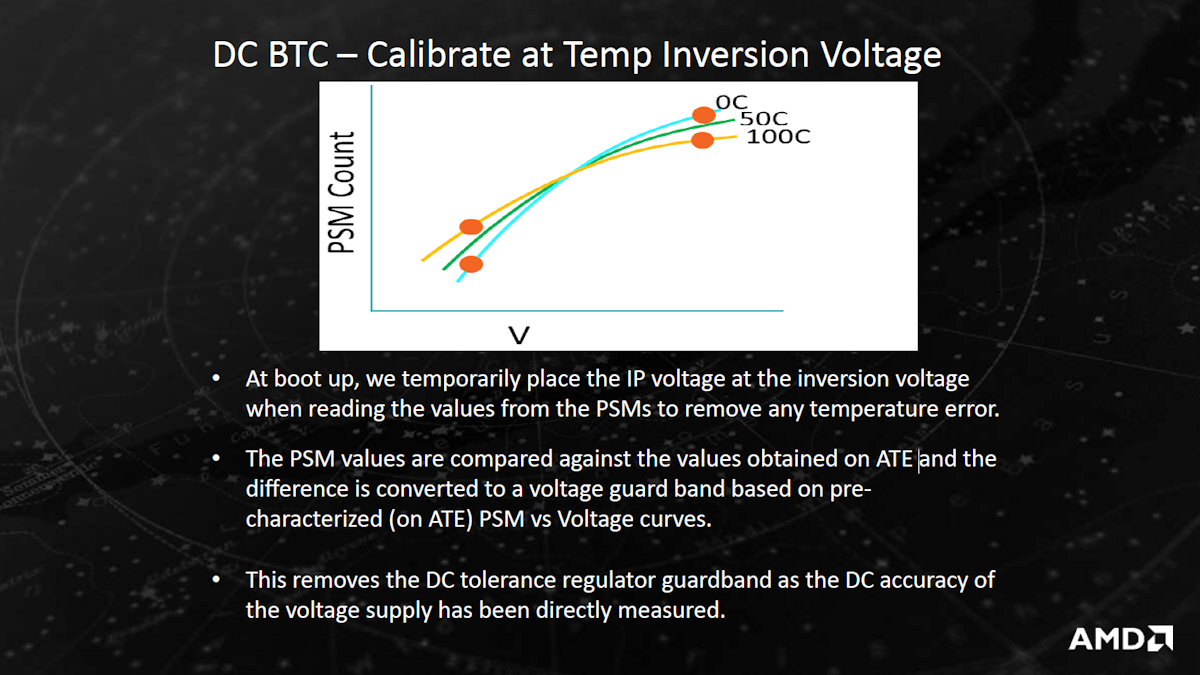 When we put all of these things together (incremental process enhancement, power and boost technologies developed by AMD) we see a significant boost from year to year with essentially the same design from AMD.  While we are well away from the days of the incremental speed refreshes that we were used to with the Athlon 64 or Phenom II chips, the new Bristol Ridge APUs provide some solid improvements over the previous Carrizo parts.  AMD has also expanded the lineup to fit in as many form factors and markets as possible.  The 15 and 35 watt parts should be able to power a wide variety of laptops and convertibles at multiple price points.

Carrizo was an interesting part and Bristol Ridge has improved upon nearly every aspect.  GPU speeds and boost clocks will allow faster gaming in titles that will run well on APUs.  CPU enhancements will keep productivity apps running in a snappy manner.  Video playback will bring the most advanced codecs to the table while cutting down on power consumption allowing for greater battery life and cooler operation.

While some were certainly hoping to see the AM4 versions of these chips be announced, we will have to be happy that AMD is aggressively chasing the back to school timeline by introducing these parts now.  Pricing has not been announced, but we can imagine that it will undercut at every market what Intel is offering.  AMD is trying to claw back marketshare in any way it can, and Bristol Ridge gives them another weapon against Intel in this very important market.  While the market itself is growing slowly, the amount of marketshare that AMD could grab is tremendous.  But that is what happens when a company only controls less than 18% of any one market. 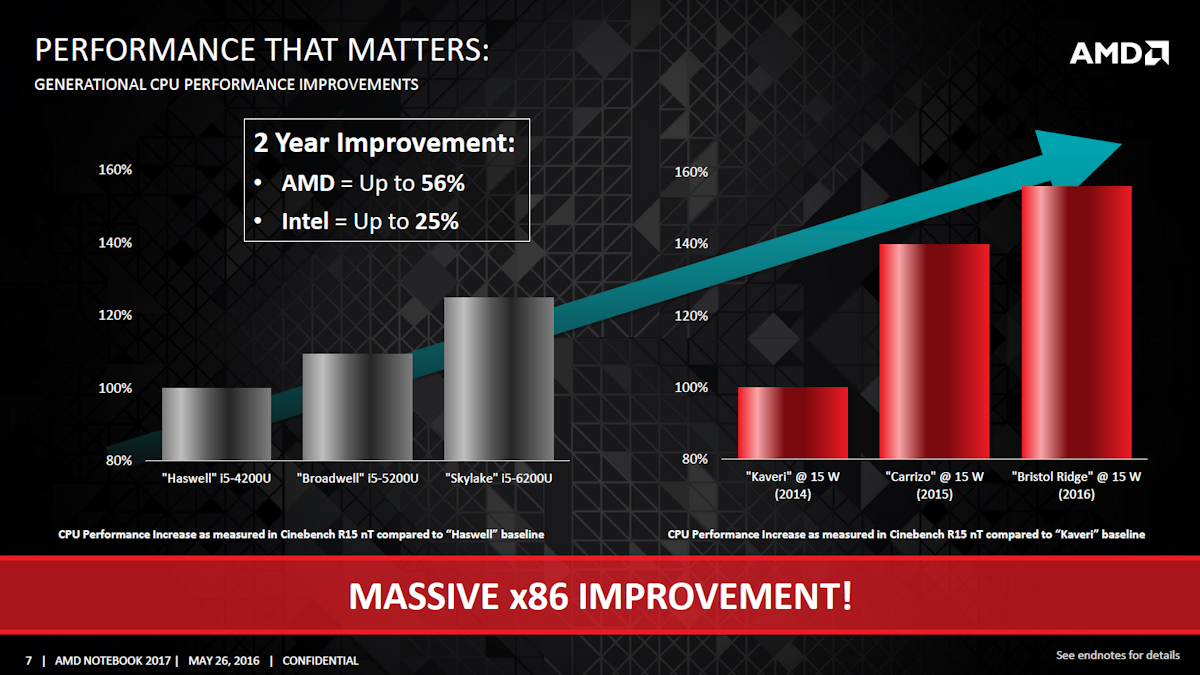 From all indications, Bristol Ridge looks like a solid improvement over last year’s Carrizo.  Intel has continued to release new parts to the market, but the differences from year to year with those products has not been great as of late.  Haswell, Broadwell, and Skylake have been incrementally better, but AMD seems to have taken a bigger leap with BR over Carrizo as compared to say Skylake over Broadwell.  We certainly want AMD to continue to survive, otherwise the CPU market will become very, very boring. 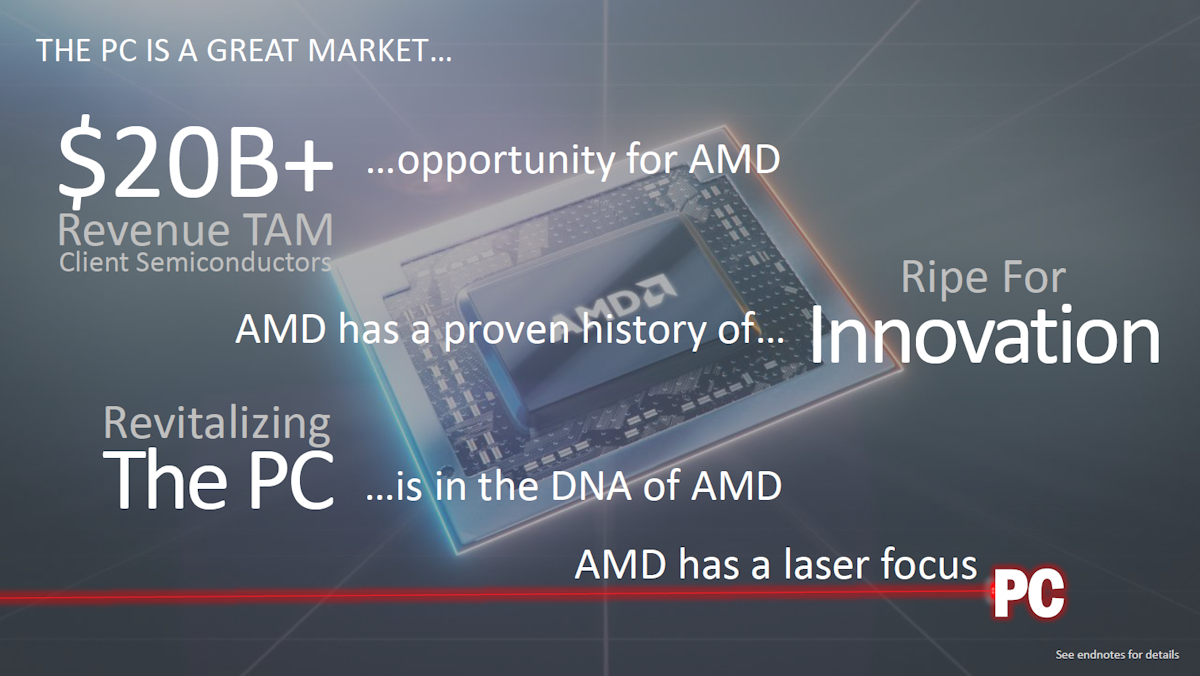 I saw this and thought "much performance, very APU, wow!" 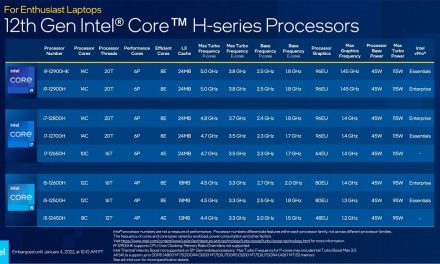 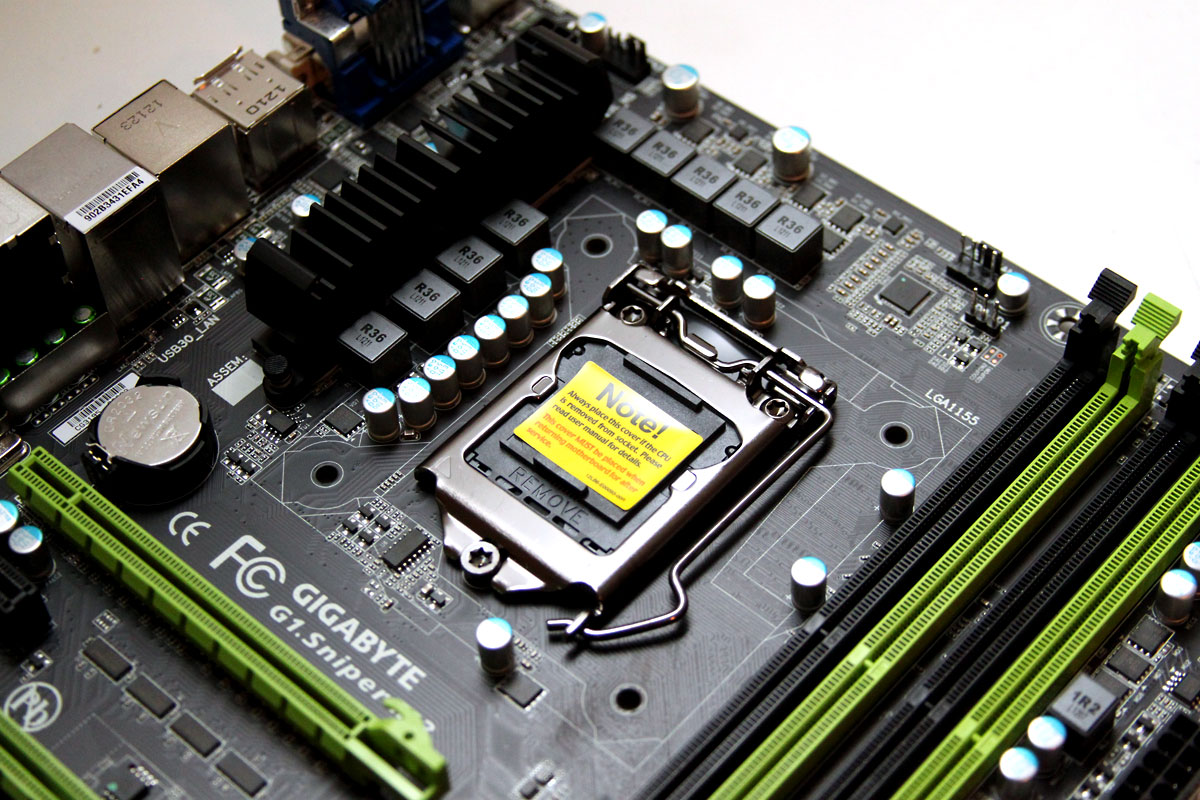