IMPORTANT UPDATE: After writing this story, but before publication, we went to NVIDIA for comment. As we were getting ready to publish, the company updated me with a shift in its stance on multi-GPU configurations. NVIDIA will no longer require an "enthusiast key" to enable SLI on more than two GPUs. However, NVIDIA will also only be enabling 3-Way and 4-Way SLI for a select few applications. More details are at the bottom of the story!

You'll likely recall that during our initial review of the GeForce GTX 1080 Founders Edition graphics card, we mentioned that NVIDIA was going to be moving people towards the idea that "only 2-Way SLI will be supported" and promoted. There would still be a path for users that wanted 3 and 4 GPU configurations anyway, and it would be called the Enthusiast Key.

As it turns out, after returning from an AMD event focused on its upcoming Polaris GPUs, I happen to have amassed a total of four GeForce GTX 1080 cards. 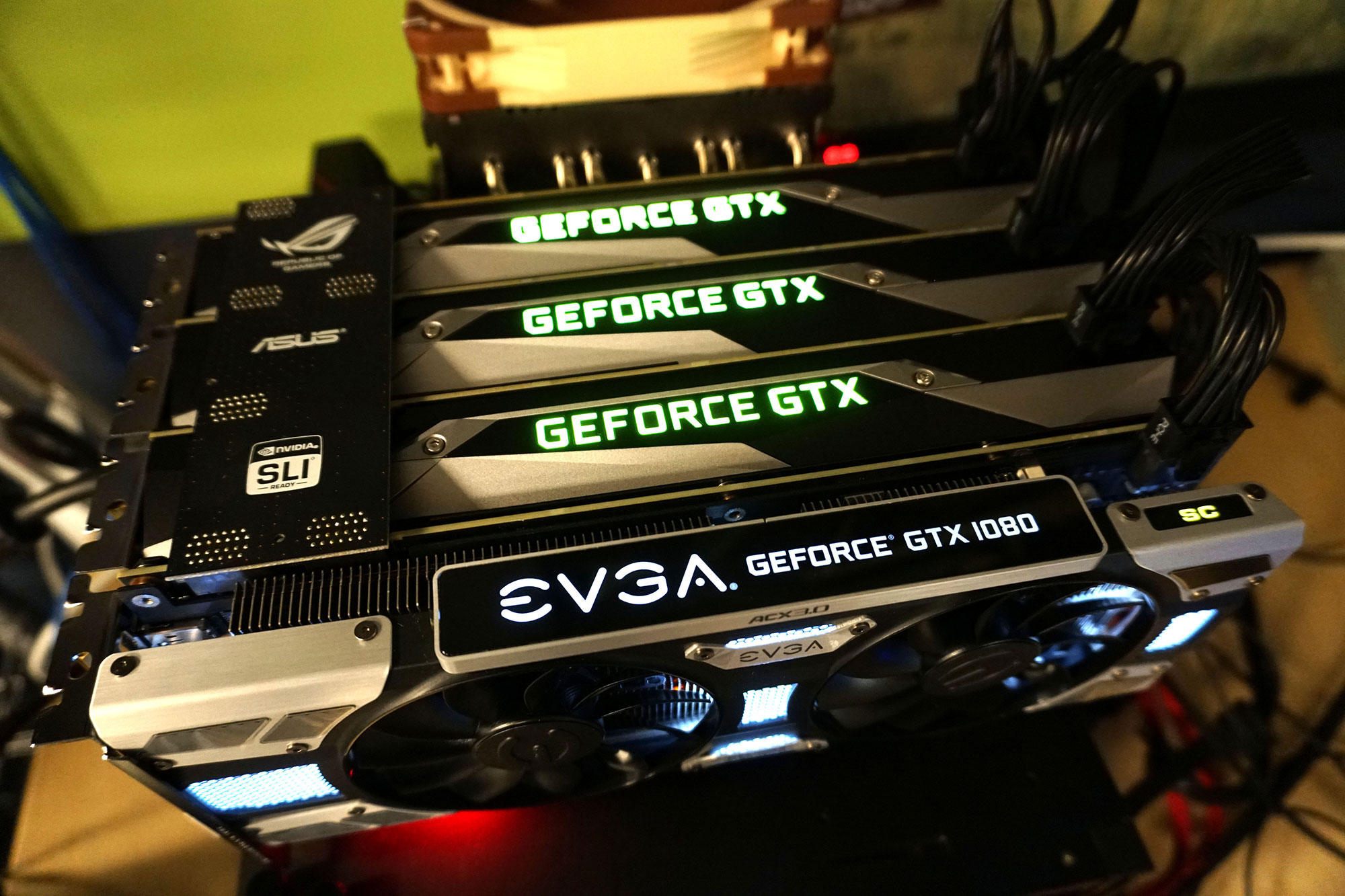 Courtesy of some friends at EVGA and two readers that were awesome enough to let me open up their brand new hardware for a day or so, I was able to go through the 3-Way and 4-Way SLI configuration process. Once all four were installed, and I must point out how great it is that each card only required a single 8-pin power connector, I installed the latest NVIDIA driver I had on hand, 368.19. 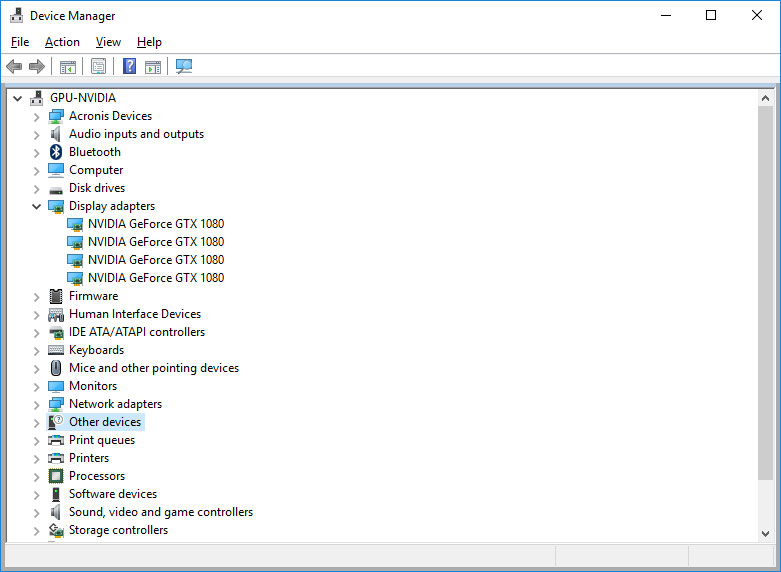 Knowing about the need for the Enthusiast Key, and also knowing that I did not yet have one and that the website that was supposed to be live to enable me to get one is still not live, I thought I might have stumbled upon some magic. The driver appeared to let me enable SLI anyway. 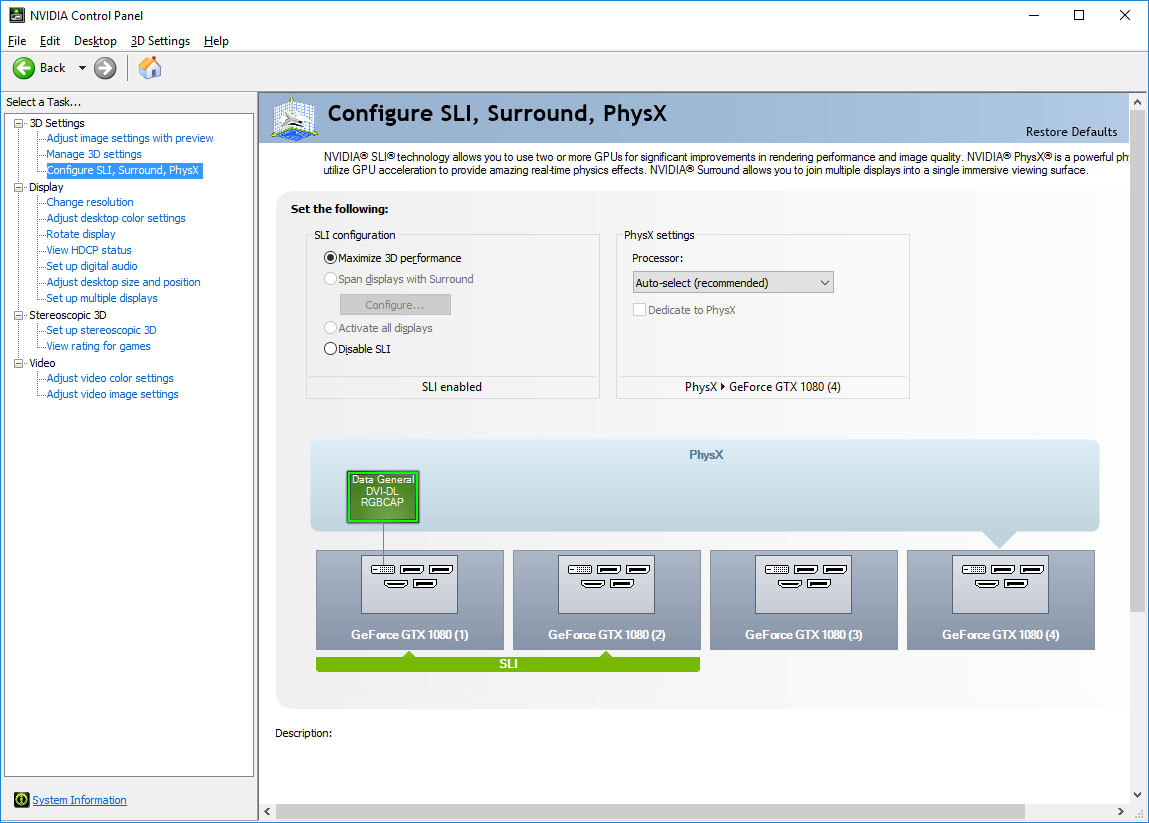 Enthusiasts will note however that the green marker under the four GPUs with the "SLI" text is clearly only pointing at two of the GTX 1080s, leaving the remaining two…unused. Crap.

At this point, if you have purchased more than two GeForce GTX 1080 cards are simply out of luck and are waiting on NVIDIA to make good on it's promise to allow for 3-Way and 4-Way configurations via the Enthusiast Key. Or some other way. It's way too late now to simply say "we aren't supporting it at all." 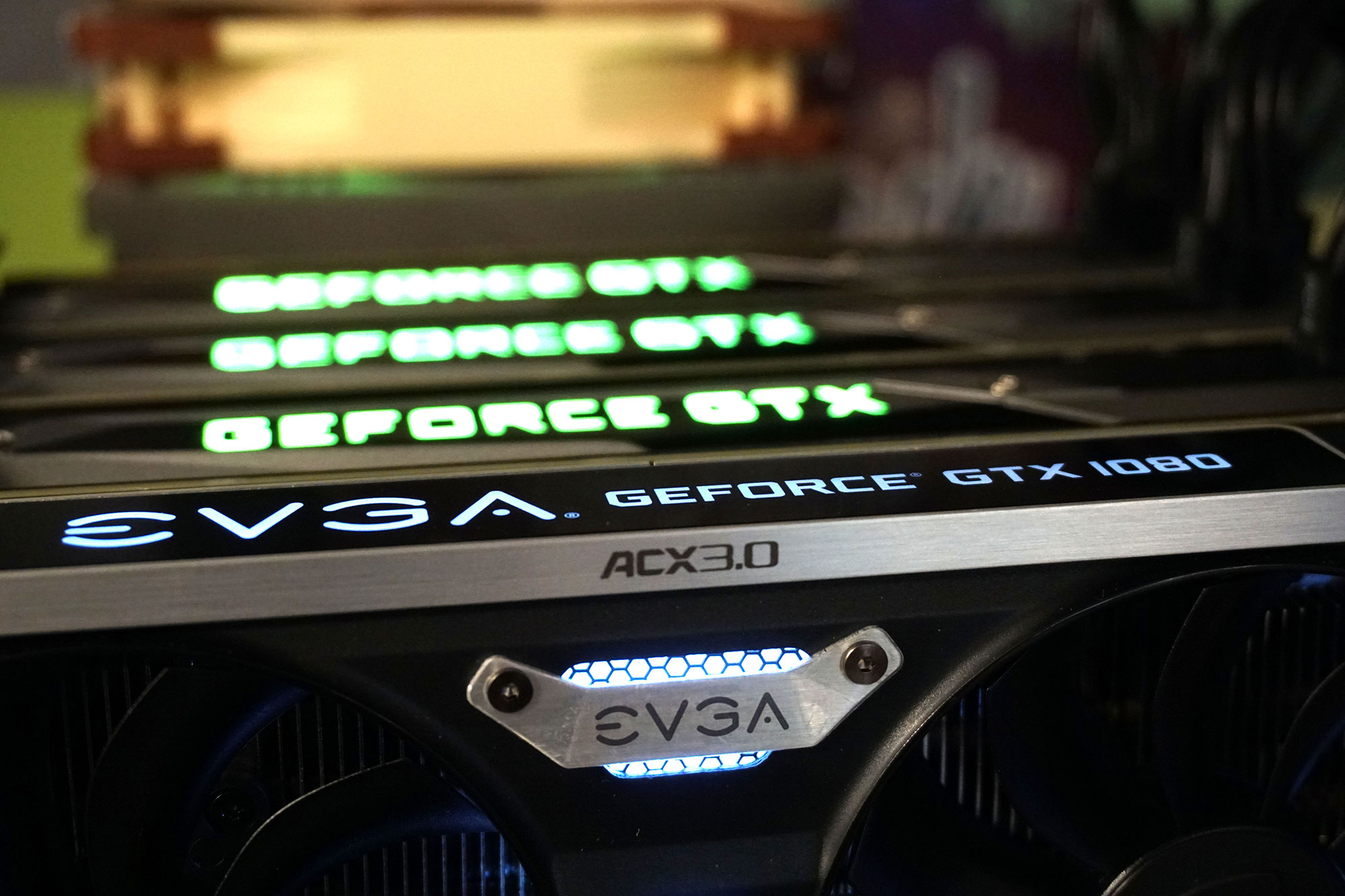 While I wait…what is there for a gamer with four GeForce GTX 1080 cards to do? Well, you could run Ashes of the Singularity. It's multi-GPU mode uses MDA mode, which means the game engine itself accesses each GPU on its own, without the need for the driver to handle anything regarding GPU load balancing. Unfortunately, Ashes only supports two GPUs today.

Well…you could run an OpenCL based benchmark like LuxMark that access all the GPUs independently as well. 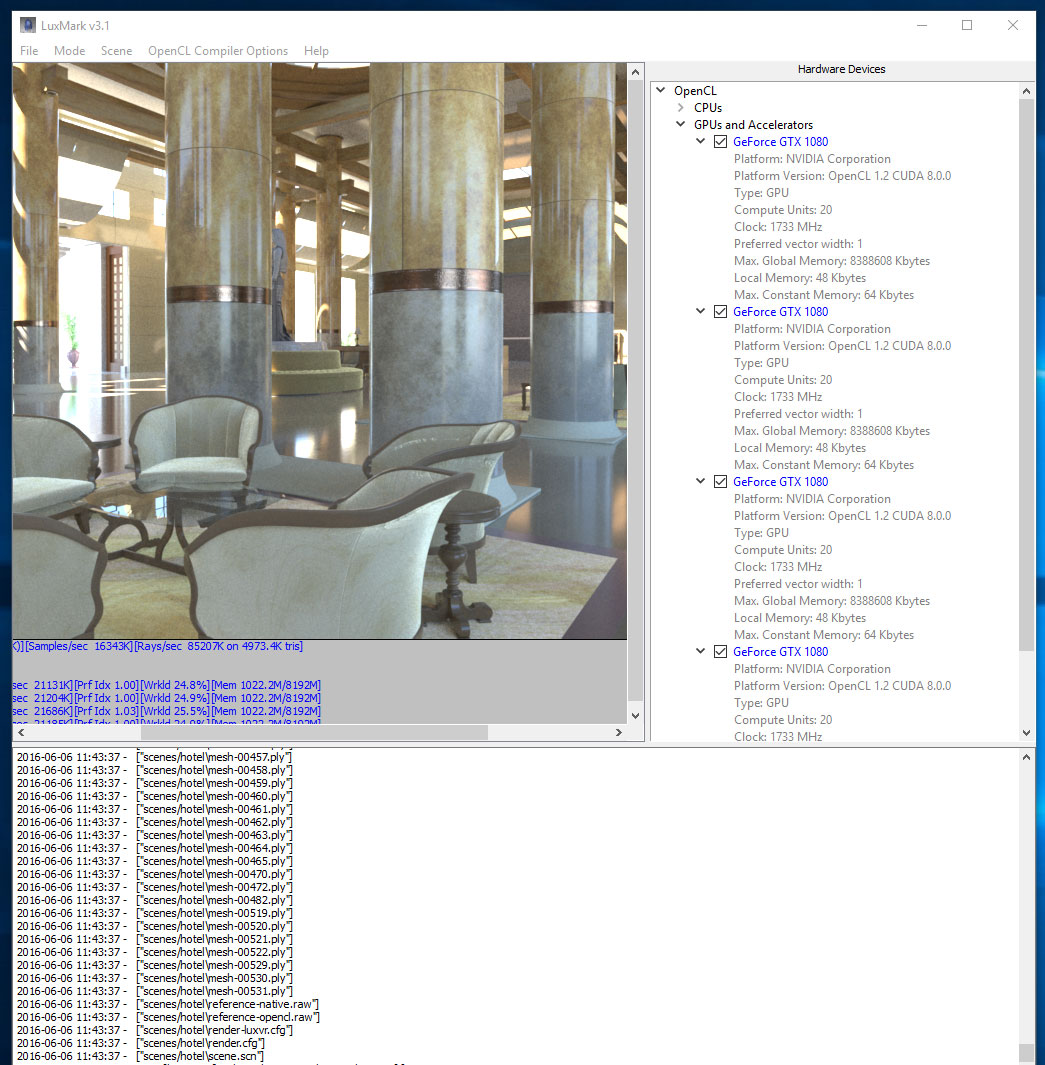 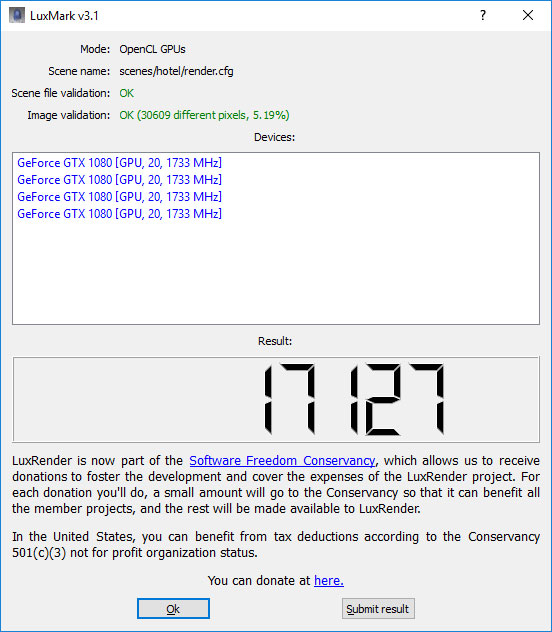 How does that compare to some other products? 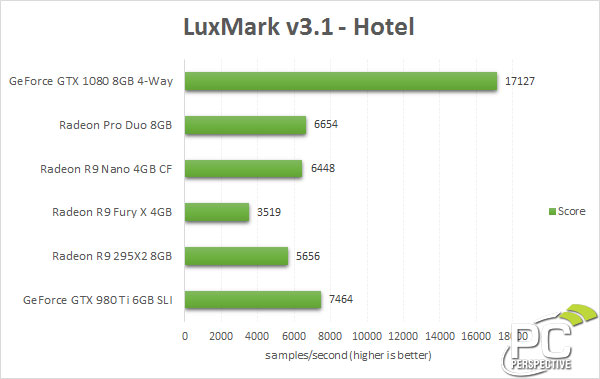 So there you go! We are just as eager to get our hands on the ability to test 3-Way and 4-Way SLI with new Pascal GPUs as some of the most extreme and dedicated enthusiasts out there are. With any luck, NVIDIA will finally figure out a way to allow it – no matter how it finally takes place.

IMPORTANT UPDATE: Before going to press with this story I asked NVIDIA for comment directly: when was the community finally going to get the Enthusiast Key website to unlock 3-Way and 4-Way SLI for those people crazy enough to have purchased that many GTX 1080s? The answer was quite surprising: NVIDIA is backing away from the idea of an "Enthusiast Key" and will no longer require it for enabling 3-Way and 4-Way SLI.

Here is the official NVIDIA statement given to PC Perspective on the subject:

With the GeForce 10-series we’re investing heavily in 2-way SLI with our new High Bandwidth bridge (which doubles the SLI bandwidth for faster, smoother gaming at ultra-high resolutions and refresh rates) and NVIDIA Game Ready Driver SLI profiles.  To ensure the best possible gaming experience on our GeForce 10-series GPUs, we’re focusing our efforts on 2-way SLI only and will continue to include 2-way SLI profiles in our Game Ready Drivers.

DX12 and NVIDIA VR Works SLI technology also allows developers to directly implement and control multi-GPU support within their games.  If a developer chooses to use these technologies then their game will not need SLI profiles.  Some developers may also decide to support more than 2 GPUs in their games. We continue to work with all developers creating games and VR applications that take advantage of 2 or more GPUs to make sure they’ll work great on GeForce 10-series GPUs.

For our overclocking community, our Game Ready Drivers will also include SLI profiles for 3- and 4-way configurations for specific OC applications only, including Fire Strike, Unigine and Catzilla.

NVIDIA clearly wants to reiterate that only 2-Way SLI will get the attention that we have come to expect from the GeForce driver dev team. As DX12 and Vulkan next-generation APIs become more prolific, the game developers will still have the ability to directly access more than two GeForce GTX 10-series GPUs, though I expect that be a very narrow window of games simply due to development costs and time.

NVIDIA will enable support for three and four card configurations in future drivers (without a key) for specific overclocking/benchmarking tools only, as a way to make sure the GeForce brand doesn't fall off the 3DMark charts. Only those specific applications will be able operate in the 3-Way and 4-Way SLI configurations that you have come to know. There are no profiles to change manually and even the rare games that might have "just worked" with three or four GPUs will not take advantage of more than two GTX 10-series cards. It's fair to say at this point that except for the benchmarking crowd, NVIDIA 3-Way and 4-Way SLI is over.

We expect the "benchmark only" mode of 3-Way and 4-Way SLI to be ready for consumers with the next "Game Ready" driver release. If you happened to get your hands on more than two GTX 1080s but aren't into benchmarking, then find those receipts and send a couple back.

So there you have it. Honestly, this is what I was expecting from NVIDIA with the initial launch of Pascal and the GeForce GTX 1080/1070 and I was surprised when I first heard about the idea of the "enthusiast key." It took a bit longer than expected, and NVIDIA will get more flak for the iterated dismissal of this very niche, but still pretty cool, technology. In the end, this won't have much impact on the company's bottom line as the quantity of users that were buying 3+ GTX GPUs for a single system was understandably small.