Overclocking with the new WattMan

Gone are the days of the ugly and aged AMD OverDrive and into the days of WattMan we are brought. Seriously, that’s the name of AMD’s new overclocking utility built directly into the driver: WattMan. I can’t make this stuff up.

WattMan delivers an incredible collection of overclocking options and presents them in the same beautiful design language that AMD has instilled into its most recent drivers. WattMan includes the ability to monitor your GPUs clocks, power consumption, temperature and fan speed. It allows you to modify clock speeds, adjust voltages, push the memory and even set power limits and acoustic limits. It’s an impressive collection of tools that might just make the third party market irrelevant for AMD users. 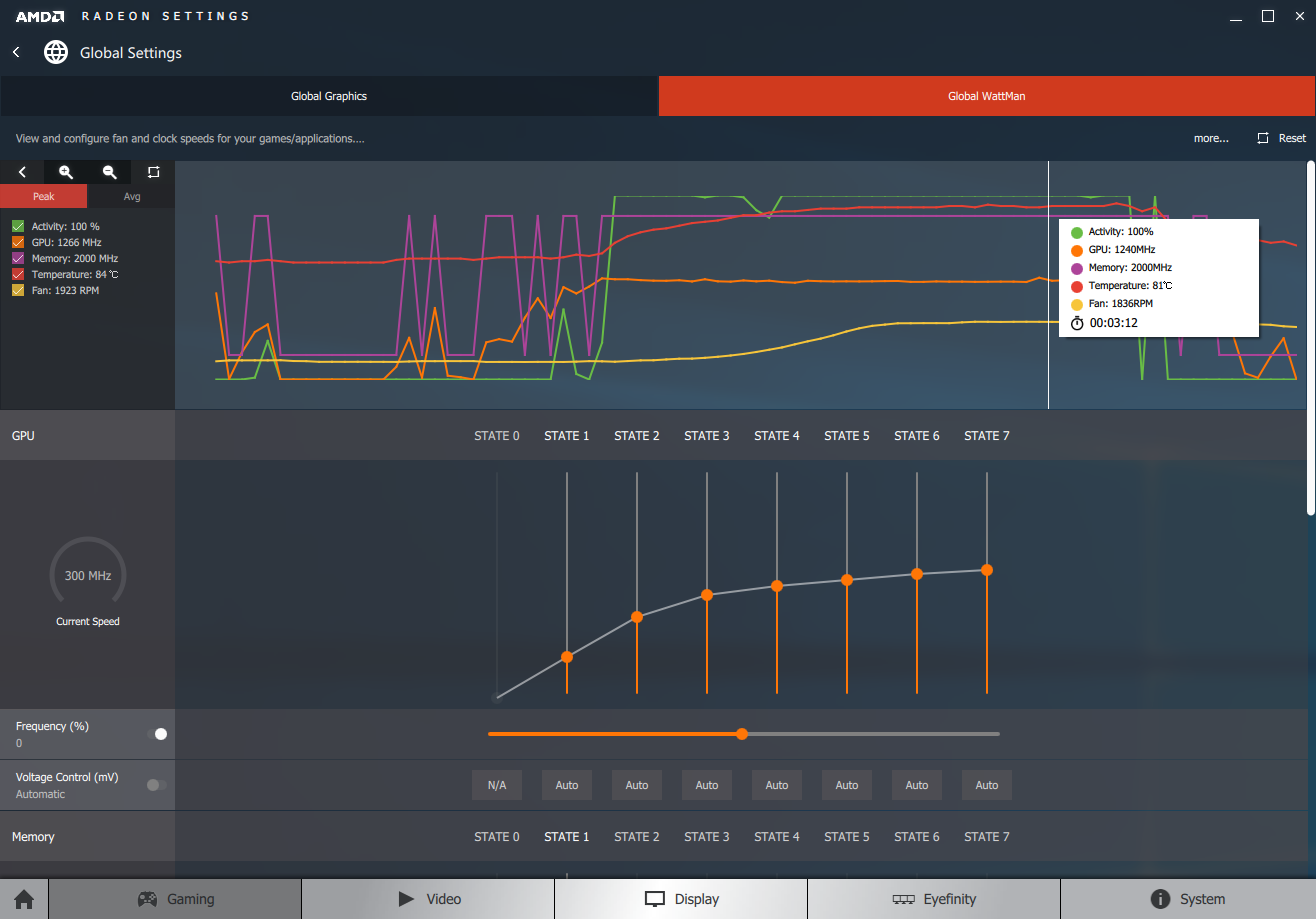 At the top of the WattMan window is a histogram style graph that gives nearly all the interesting information at a glance. It has the GPU activity level, GPU clock rate, memory clock rate, GPU temperature and the fan speed as well. A mouse over capability lets you scan across the timeline to help you keep track of exactly how the card is behaving.

One cool addition the team made was per-game logging to this histogram. Since you can set overclocking WattMan profiles per-game, or globally, the software can also set to record data to the histogram while the user is in a particular game, then exit the game and still access that data. This will definitely help gamers improve their per-game tuning with the RX 480.

Under the histogram is the GPU clock and voltage control. There you can adjust the clock rate in a couple of ways: a static offset by percentage or through manual adjustments at each of the seven DPM states. Even more interesting, if you want to dive into it, you can actually change the voltage individually at each DPM state. 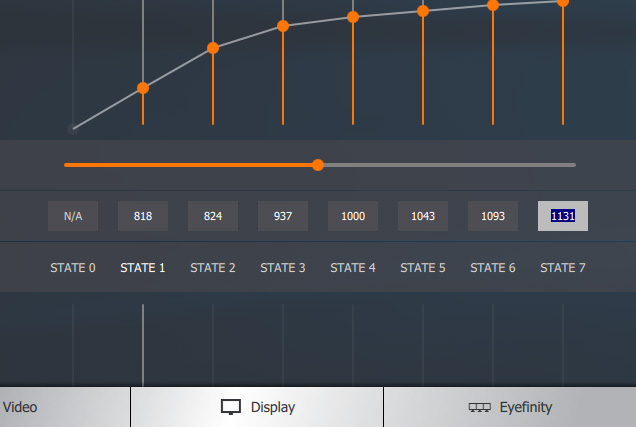 This is big shift in the amount of control offered by AMD on its Radeon hardware and is actually a bit more granular than what we have with the latest tools from NVIDIA and EVGA. 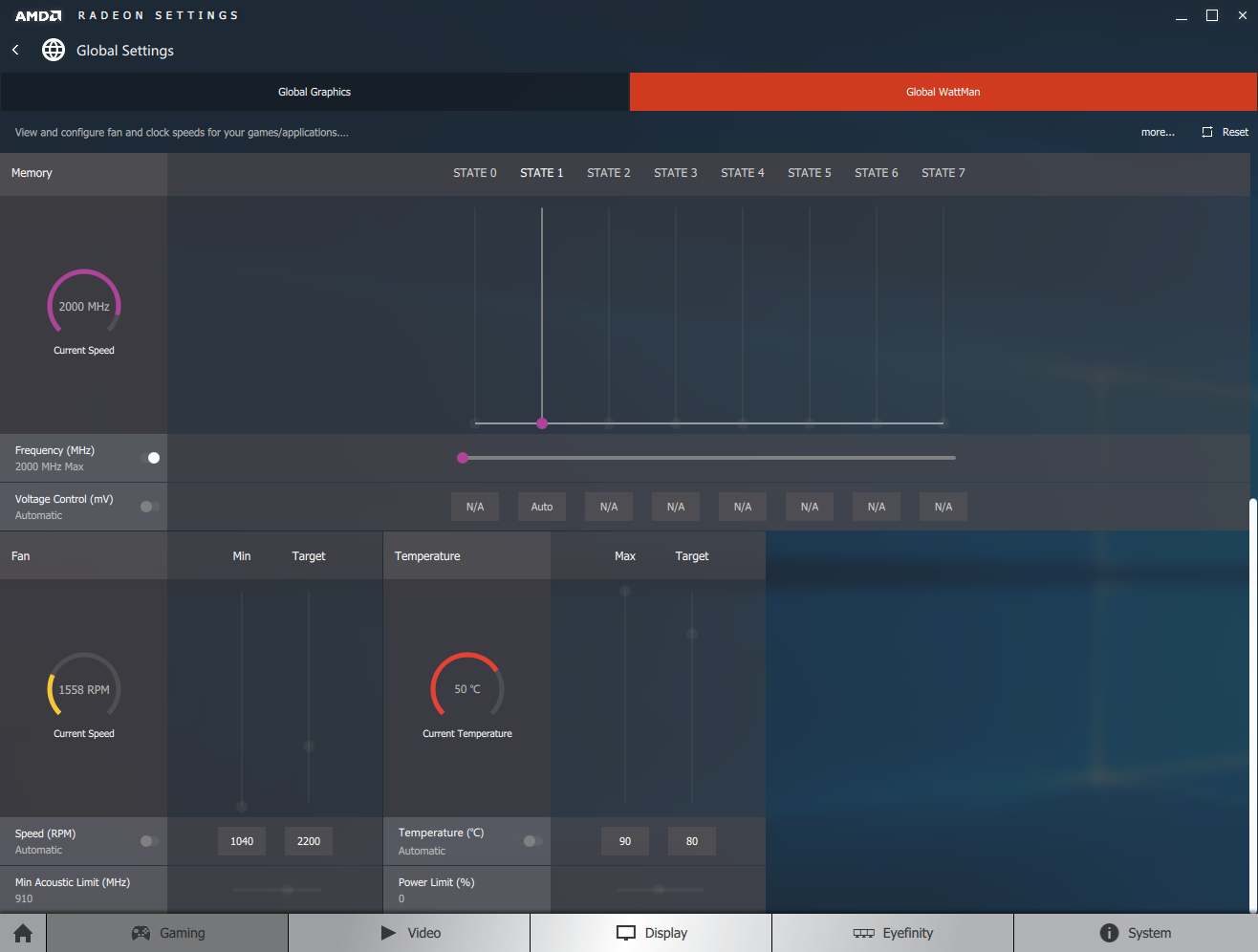 Under the GPU control is memory adjustments (both clock and voltage) though they don’t have a curve – there is just a single state for overclocking those here. (I do wonder why the information is provided in the same way as GPU clocks then…)

Fan and Temperature subsections allow gamers to modify minimum and targeted fan speeds, maximum and targeted temperatures, the power limit (under temp) and a minimum acoustic limit. I would love to see AMD have a fan curve and modification capability to the controls here, rather than just a two point option, but that may be something they are leaving to the board partners to handle.

The minimum acoustic limit is an interesting data point, as it can be quite confusing with a frequency as its label. That setting basically refers the lowest clock speed the GPU will be allowed to run at before the fan on the card is sped up to lower GPU temperatures and raise the frequency. At its most basic level, this is the “base” clock speed of the GPU. I definitely can see gamers setting this to a higher level if they are not adverse to increase sound levels, in order to maintain a bare minimum performance level in worst case gaming and enclosure scenarios.

My time spent overclocking with the Radeon RX 480 and WattMan was a surprisingly pleasant experience for a first attempt with both new hardware and new software. The interface for WattMan is solid, a HUGE step above what OverDrive was before, and the Polaris 10 GPU supplied at least some headroom to work with.

My process for overclocking was pretty straight forward – I used the Unigine Heaven DX11 benchmark to loop and used WattMan for all configuration changes. Best practices as recommended from AMD are to first adjust the target temperature and power limit on the card, run some games for extended periods to test for stability and performance improvements, then move on to adjusting the clock speeds. As you would expect, adjust only the temperature target and the power limit (by percentage) will net you some free performance. By allowing the GPU to move above its default temperature target of 80C, to 90C, the card will use more power and stabilize at higher clock speeds for longer periods of time. The same with the power limit – any user of NVIDIA’s GPU Boost will be familiar with this behavior. 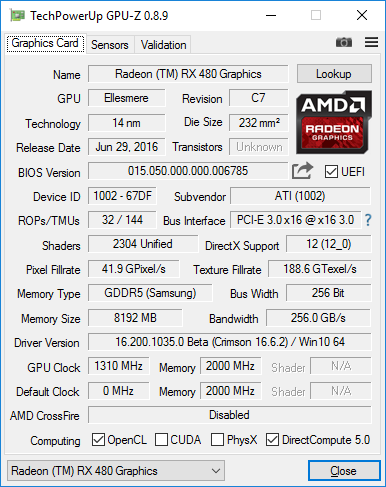 After I set the power limit to +30% and the target temperature to 90C, I then raised clocks. I’m going to be honest here: I was expected a bit more overclocking headroom out of the Polaris 10 GPU. I was only able to get a 3.5% overclock on the GPU frequency stable, and that included the power and temperature adjustments.

That results in the “boost” clock going from 1266 MHz to 1310 MHz (44 MHz) – a modest jump to say the least. More important than what GPUZ reports, now that AMD has implemented proper adaptive frequency scaling, is what clock rates we actually see in game. 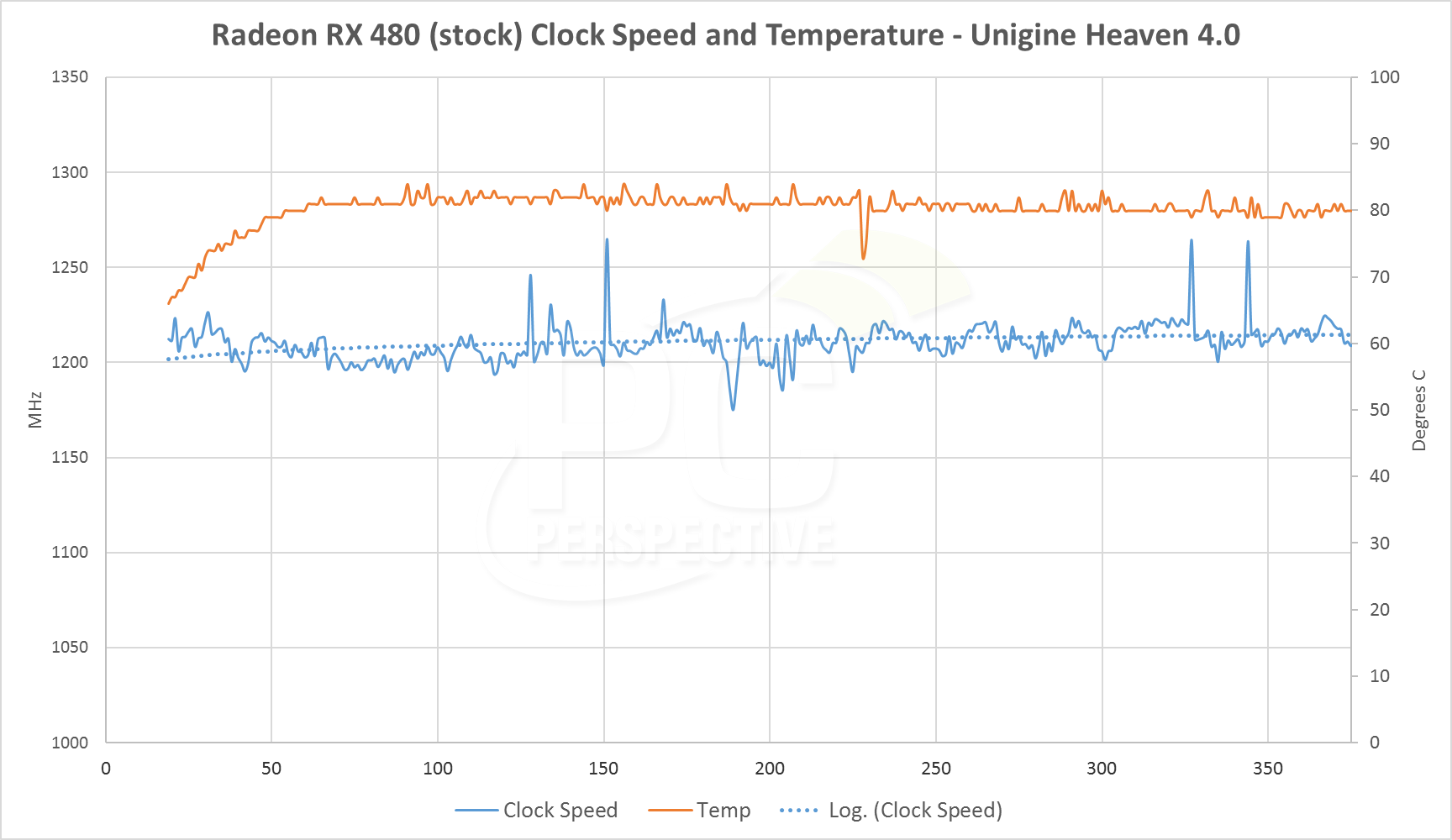 Above is the clock and temperature measurements after extended looping through Unigine Heaven at stock settings. The orange line stabilizes on 80C while the blue line averages out in the ~1210 MHz level. 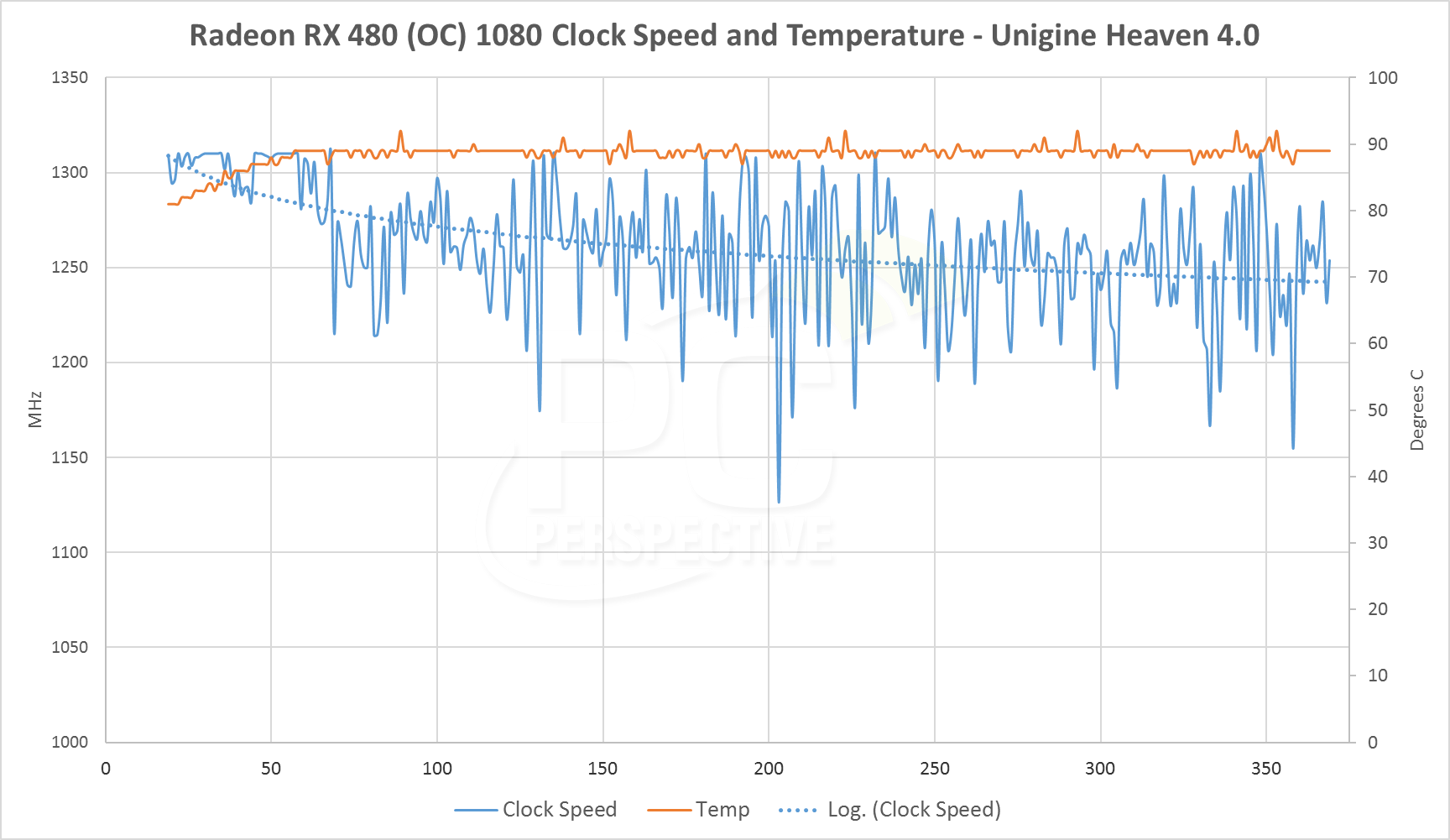 After running through our overclocking process, the results change quite a bit. The temperature is definitely hitting that 90C level but the clock speed is MUCH more variable than it was before, jumping between 1150 MHz and 1300 MHz. The net change in average clock speed is there, now we are running closer to 1245 MHz. That much clock speed variance could indicate potential issues with game smoothness as well and I saw one example of this in my testing. 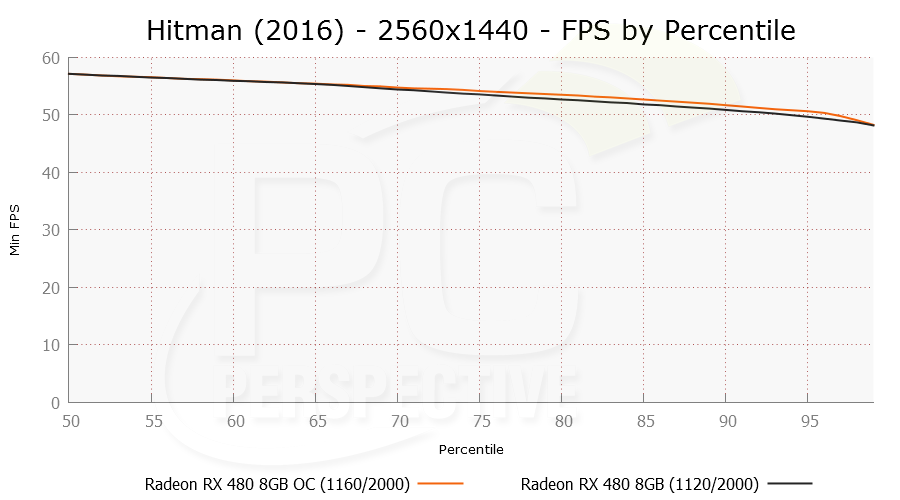 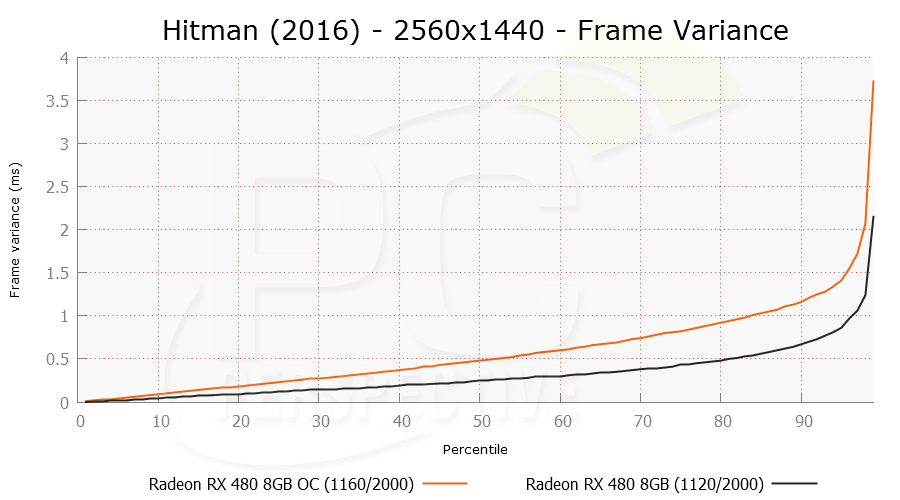 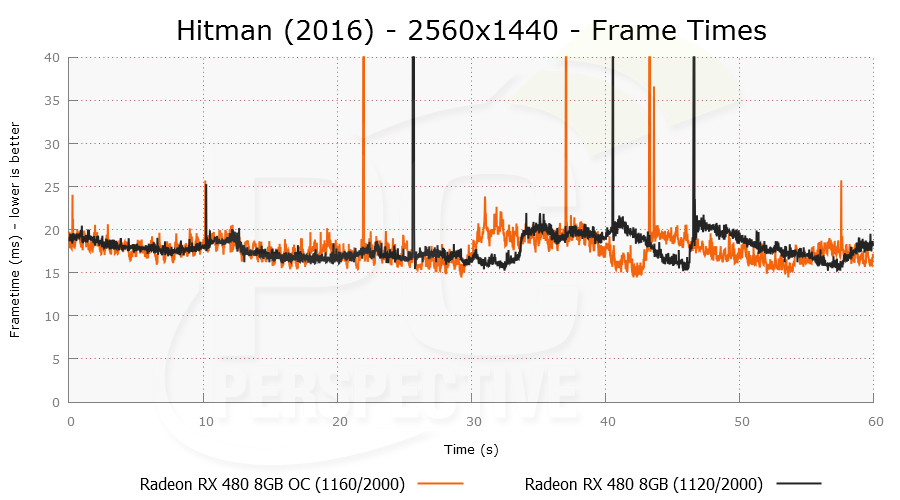 In Hitman at 2560×1440, average performance between stock and overclocked testing shows no change. However, it’s clear that the frame time data when overclocked is more variable and we see slightly less smooth gameplay because of it. It’s not a dramatic difference, as it seems AMD has figured out how to handle this better than it did with the R9 Nano, but it is something to be wary of going forward. 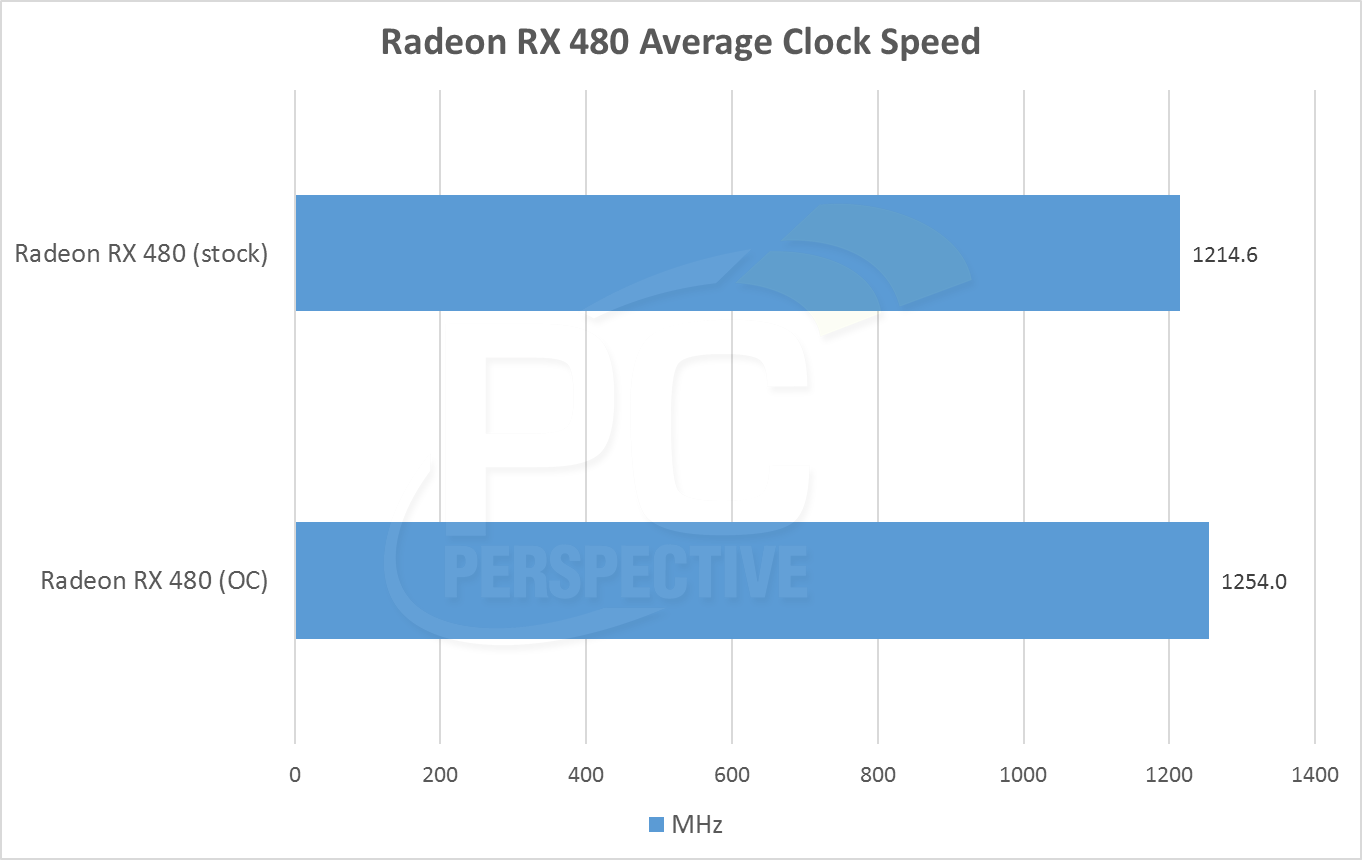 If a user wants to, cranking up the fan speed on the card (and thus the noise levels) will stabilize things, lowering variance on the clock speed at that same 90C temperature.

I have heard from other reviewers of the RX 480 that my overclocks are on par with what others have seen. That is somewhat disappointing, as I was hoping the move to 14nm FinFET would net us a larger window for partners and for overclockers to play in. As it stands now, the WattMan utility is vastly improved; Polaris, much like Fiji before it, might not make for the best overclocking story.

Battle of the budget boards; MSI’s 650 Ti TF BE