The screen on the Huawei MateBook is an impressive piece of the puzzle, with a startlingly low amount of bezel. It is not quite as “wow” inspiring as the Dell XPS 13 is, but for a device that you will hold in your hands having some area that you can touch that does not register as input is important. It’s a 12-inch IPS screen with amazing viewing angles and a 2160×1440 4:3 resolution. Scaling is definitely enabled in Windows 10 out of the box and Windows continues to improve its capability in that regard. 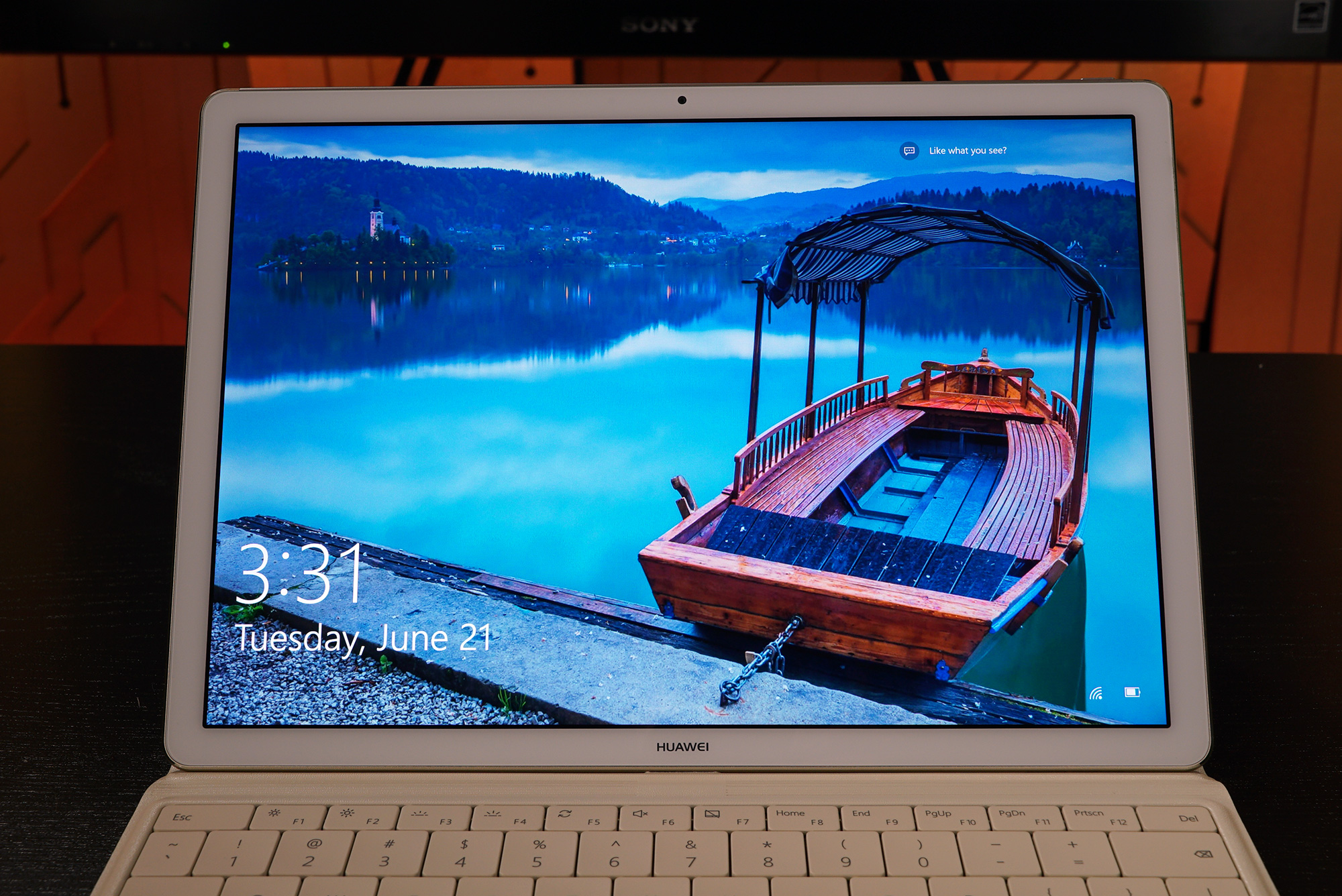 Color accuracy seems to be very good, with Huawei claiming to have 85% color gamut.

Touch capability works great and is responsive to multiple inputs.

The MateBook Portfolio Keyboard is likely a must have accessory for potential buyers, adding a keyboard and touch pad, as well as a classy looking case, to the ultra-thin tablet. It attaches to the MateBook with a click and stays in place very well with just a few magnets.

The keyboard does add some weight to the device, an additional 450 grams (the tablet weights 640 grams) but most users will find the trade-off very much worth it. The keyboard is also spill resistant, though I did not try to pour my Diet Coke on it quite yet. 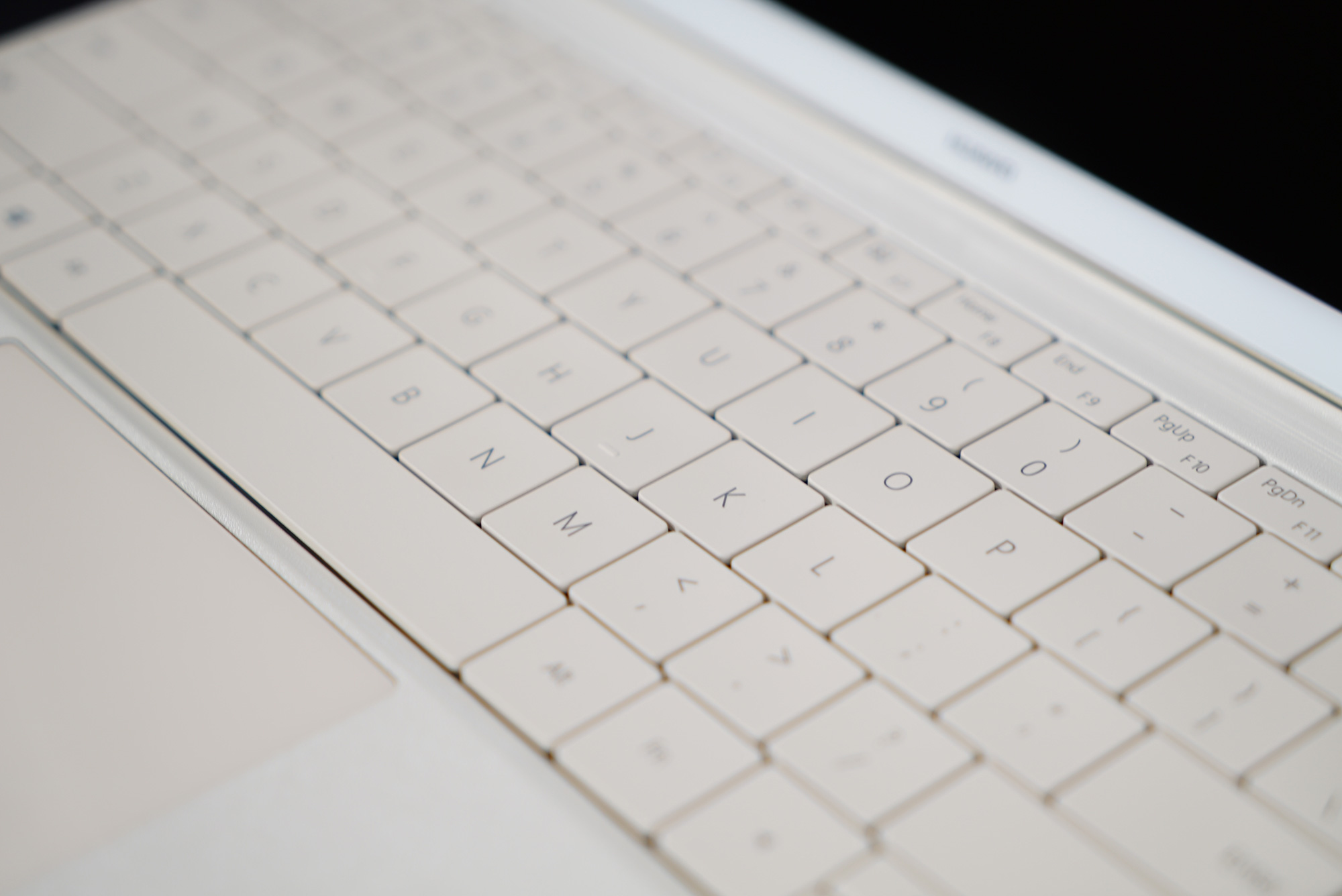 With a 1.5mm key travel, the keyboard types surprisingly well. When I reviewed the Surface Pro 4 I was surprised at how usable the Type Cover really was, and it seems that Huawei took note of that. This is not a 100% sized keyboard, but having written this entire review on the MateBook and Portfolio Keyboard I can vouch for the usability of the hardware for productivity. The backlit keys help when working in the dark with four different brightness levels.

The touchpad works well enough and a nice solid click to it, similar to my Dell XPS 13. It is not mushy and is responsive when you need it, though I do wish it had slightly better palm rejection when typing. I sometimes found my cursor on the wrong line when moving back and forth from the keyboard to the touchpad. 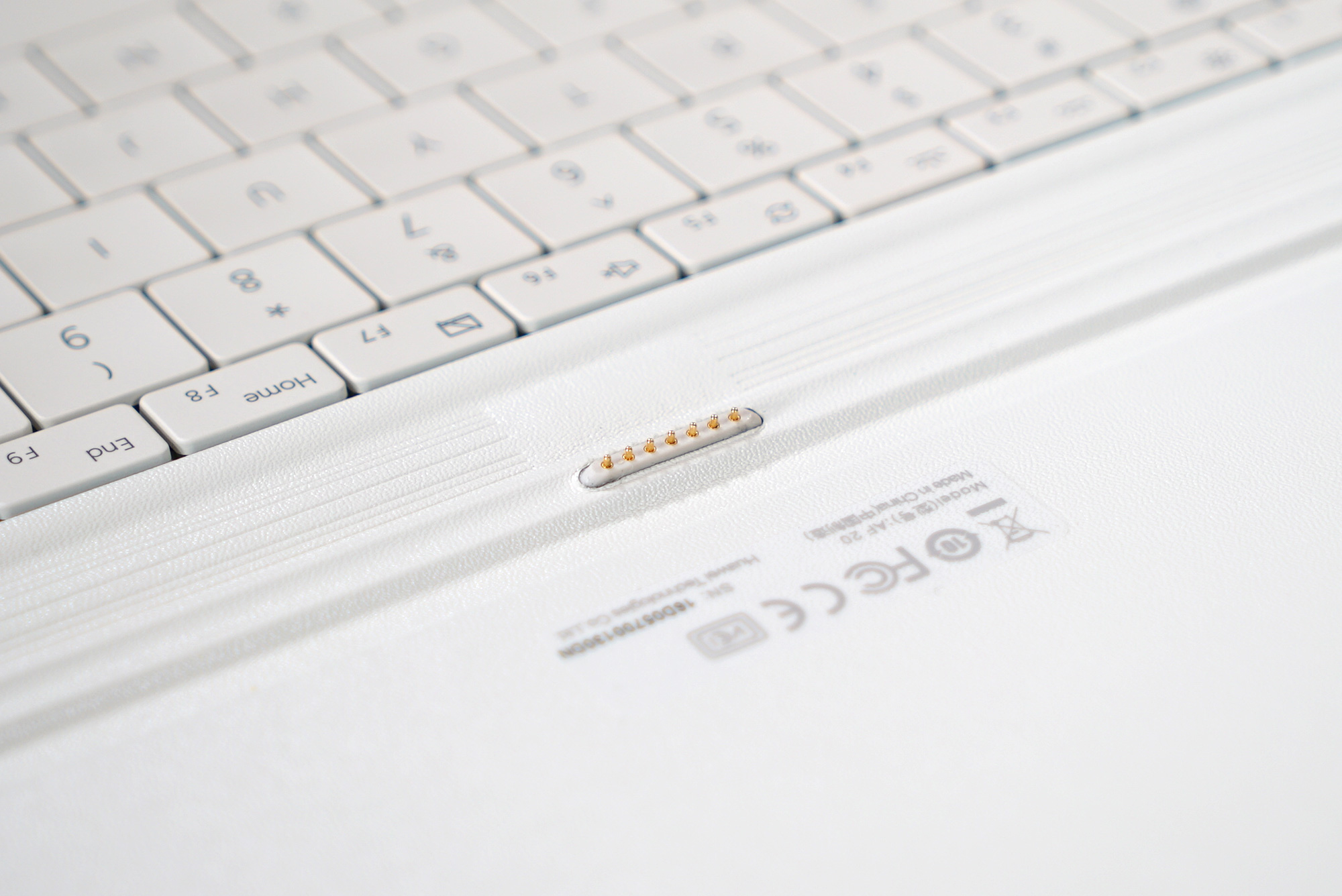 A few things stood out to me that could have been improved on the portfolio. First, the connection between the tablet and the keyboard through the POGO connection could be jostled loose fairly easily when moving the combination around. At least the disconnection/reconnection process is quick and simple. I also felt that there was just a BIT too much bounce along the top of the keyboard (number keys, top row of letters) because of spacing between the table/surface and the angle at which the keyboard comes off the tablet. 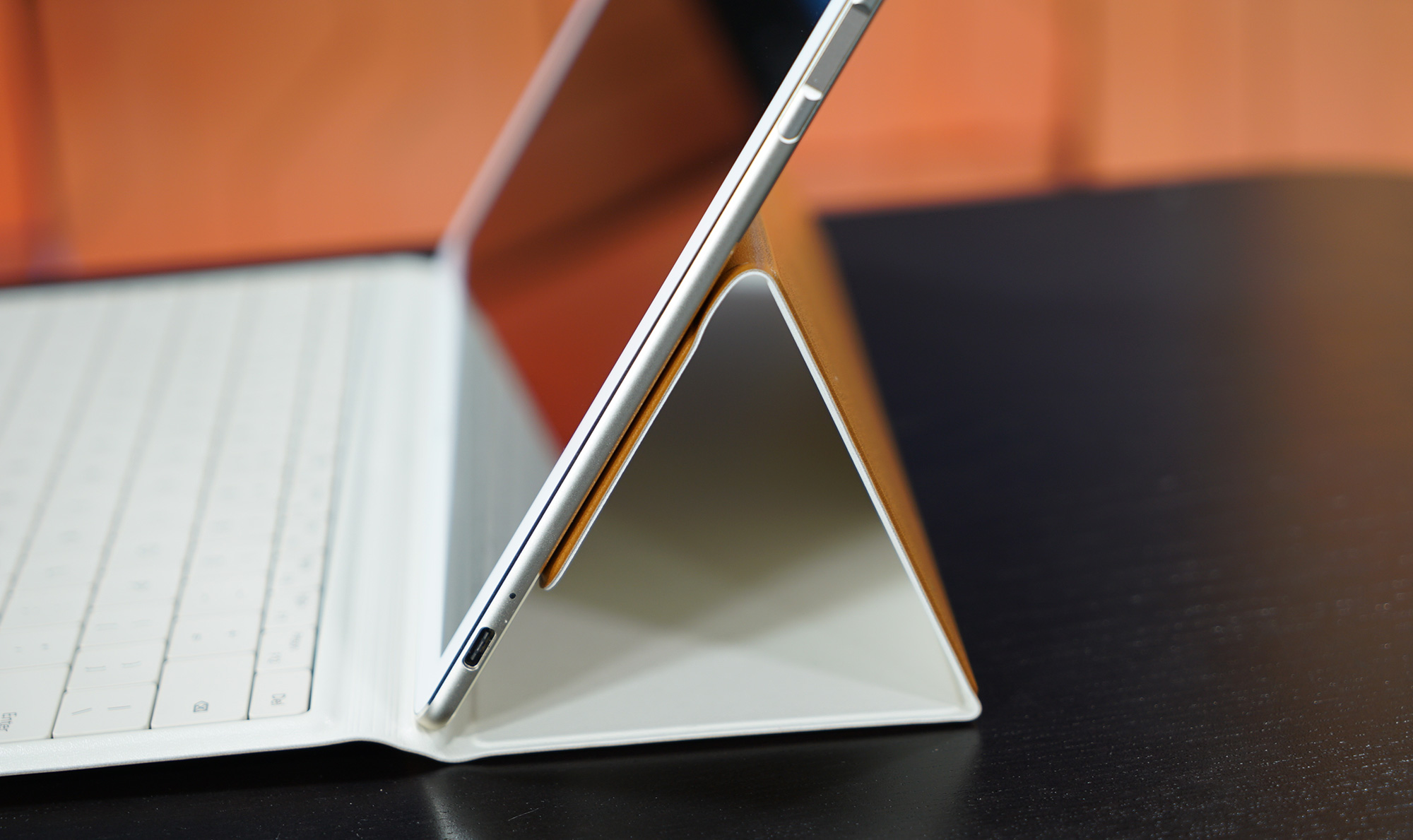 The portfolio has two position for angling the tablet and screen. Compared to the Surface Pro 4 it is quite limiting and might be an annoyance for users that are looking for more flexibility in any kind of specific situation. The magnets that hold the portfolio to the tablet seem strong enough and I did not have any accidental disconnection when typing furiously. 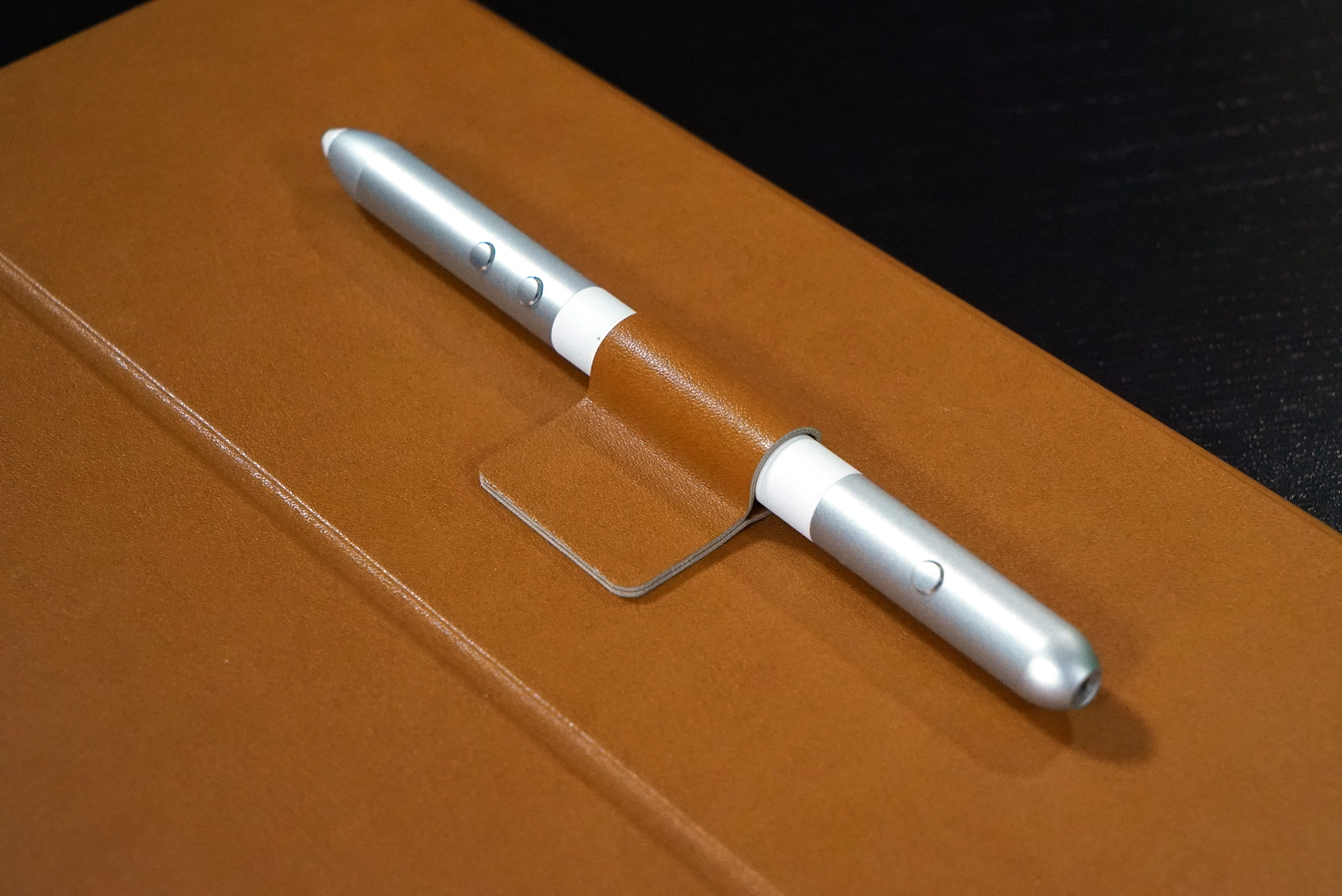 Finally, the stylus (which I will touch on below) attaches to the Keyboard Portfolio through a small leather loop that uses a magnet to adhere to the back. The problem is that the magnet is not nearly strong enough. I found that simply trying to put the stylus back in or remove was enough to pull the loop off the portfolio. I was also worried that I might just lose the loop and stylus just by carrying the MateBook around – we really need a more robust attachment solution.

The MatePen is a pretty standard active stylus but one that works very well with Windows 10 and the MateBook. Huawei claims that it has 2,048 levels of pressure sensitivity, which should give artists and creators flexibility and capability to be accurate. It is powered by an integrated lithium battery that recharges through a micro-USB connection accessible by simply pulling it apart. It should get “up to” 100 hours of use with a full charge.

The two buttons near the writing tip include a dedicated button to enable the erasing mode and a context button used to selection among other things. Along the back you will find another button that is used for the integrated laser pointer.

The final accessory Huawei sent along is a dock, affectionately called the MateDock. It connects to the MateBook through the USB Type-C port and adds two full-sized USB 3.0 ports, a Gigabit Ethernet port, an HDMI port and a legacy VGA connection. It also have a Type-C connection to pass through the power input for charging. It has a slot to keep the Type-C to micro-USB converter and the short Type-C cable handy. 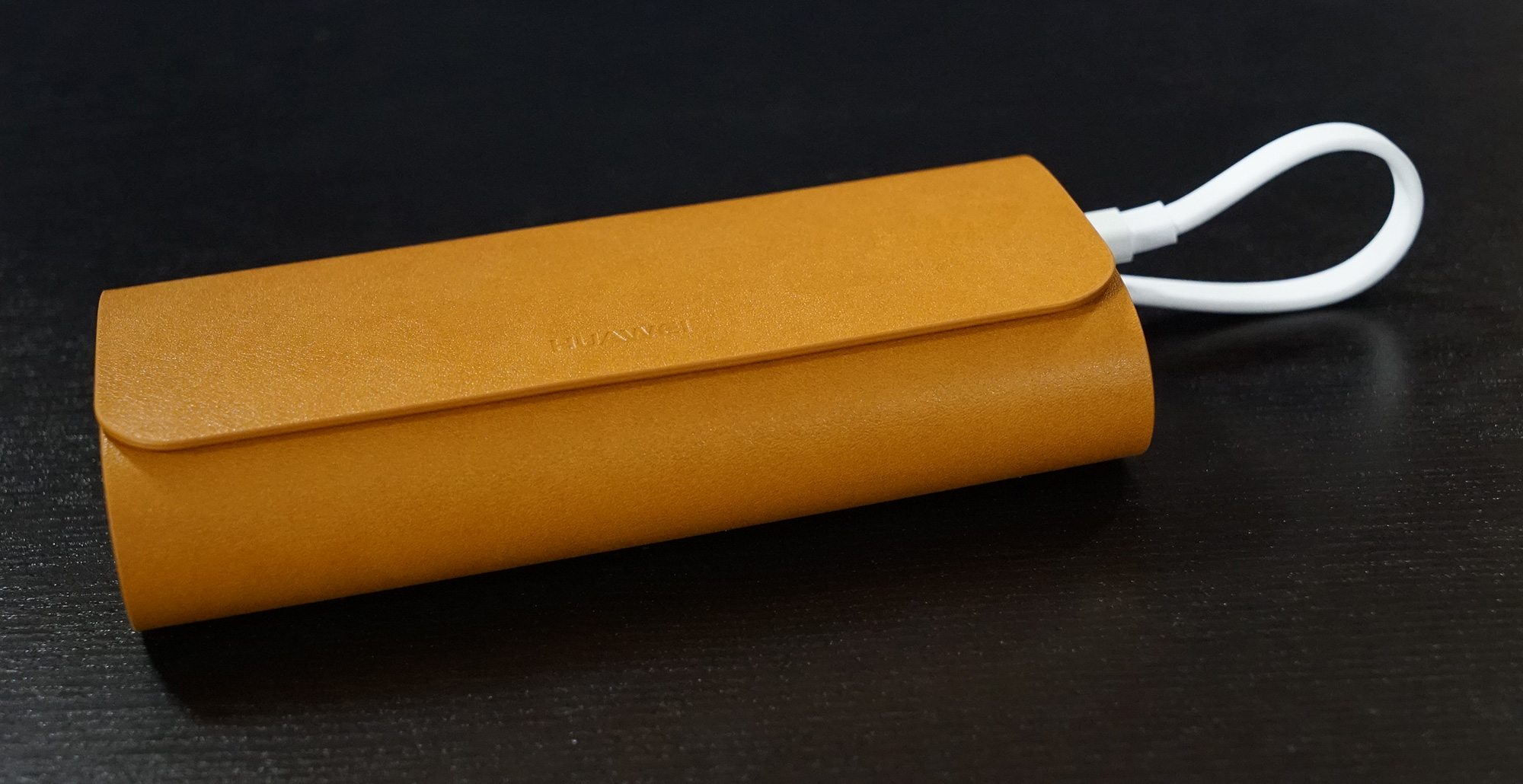 The dock’s capabilities are great but the implementation is just a bit odd. The leather case is flimsy and the magnets do not seem strong enough to hold it closed with the stylus in its holder. The loop that the Type-C cable for connecting to the MateBook creates when not in use is odd looking and could be a potential breakage point from being tossed in your bag repeatedly. 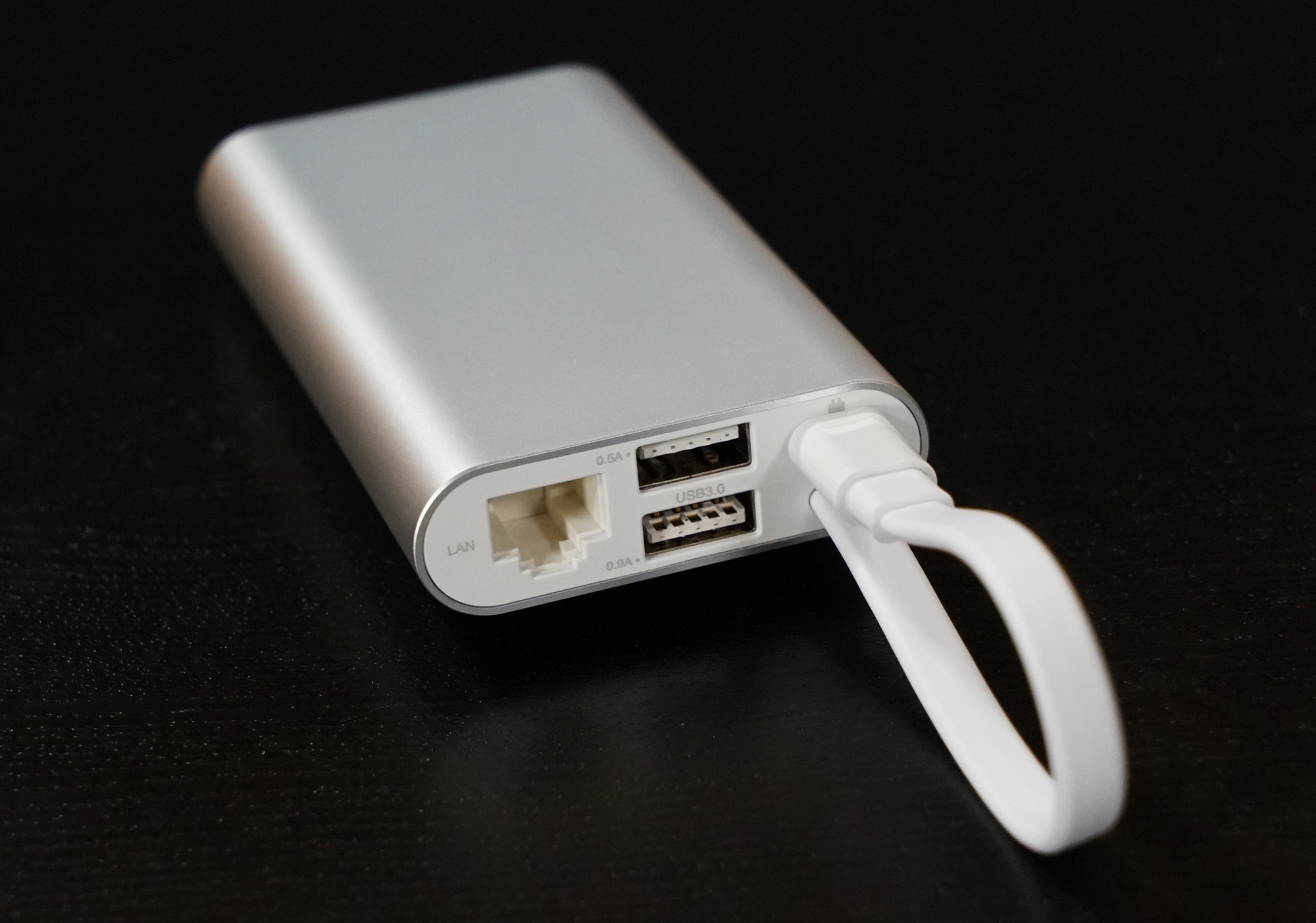 I think Huawei could improve the next iteration of the dock by adding in a basic SD card reader as well as increasing the size some to include a battery for extended usage scenarios.