We know pretty much all there is to know about AMD's new Polaris architecture thanks to our Radeon RX 480 review, but AMD is taking the covers off of the lower priced, lower performance products based on the same architecture tonight. We previously covered AMD's launch event in Australia where the company officially introduced the Polaris 10 RX 470 and Polaris 11 RX 460 and talked about the broader specifications. Now, we have a bit more information to share on specifics and release dates. Specifically, AMD's RX 470 will launch on Thursday, August 4th and the RX 460 will launch on the following Monday, August 8th. 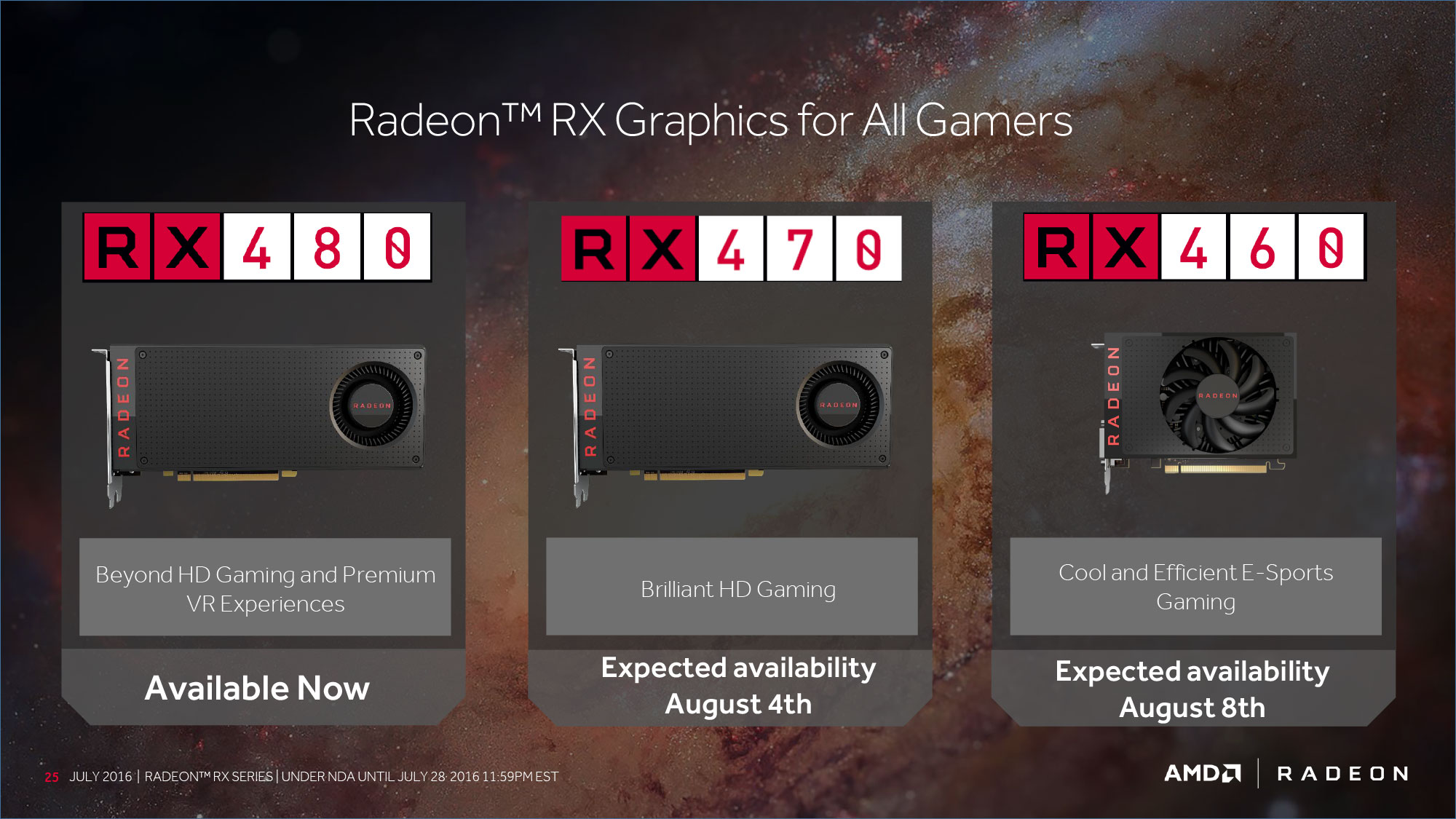 First up is the Radeon RX 470, based on the same Polaris 10 GPU as the RX 480, but with some CUs disabled to lower performance and increase yields. 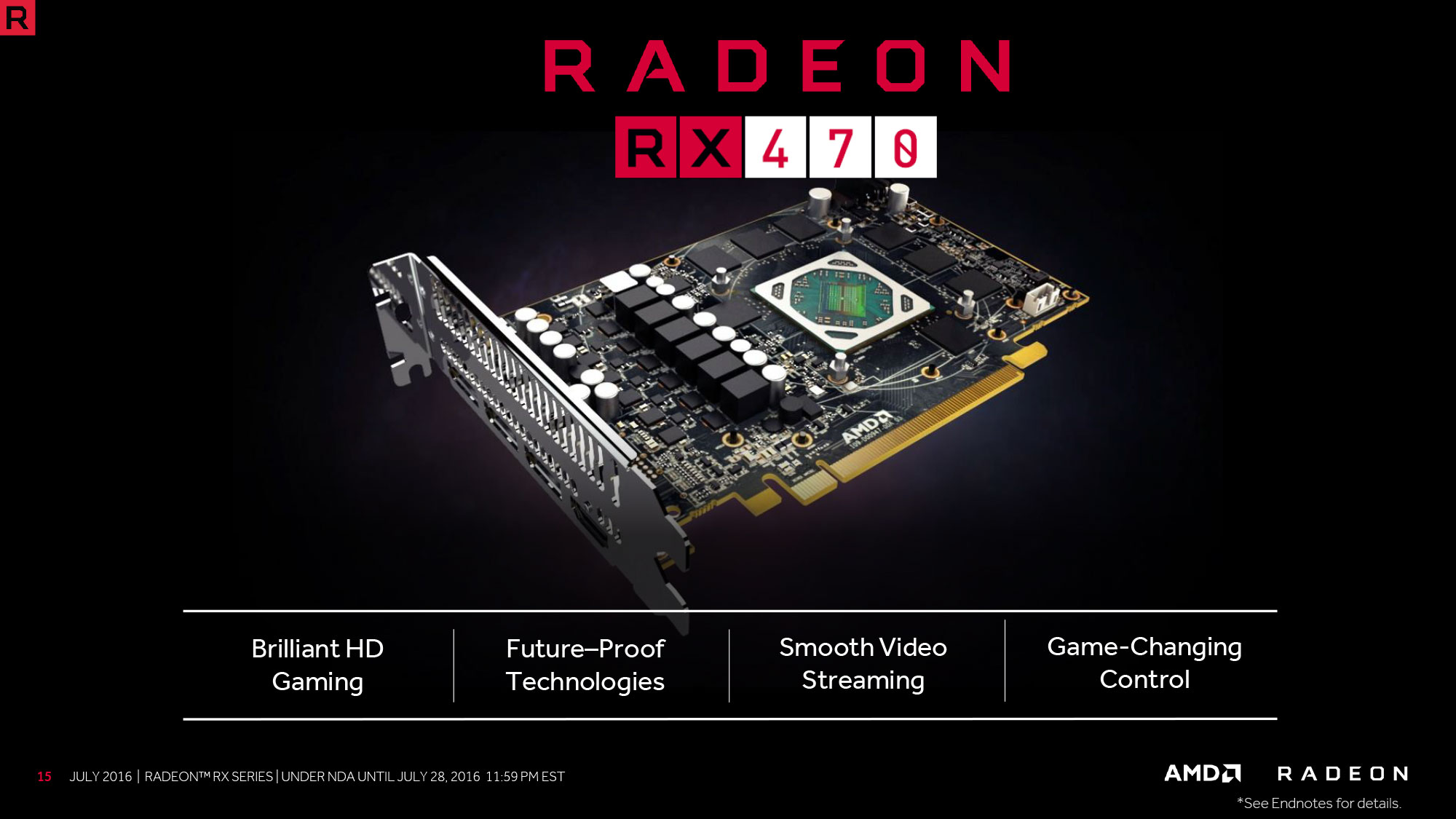 This card is aimed at 1080p gaming at top quality settings with AA enabled at 60 FPS. Obviously that is a very vague statement, but it gives you an idea of what price point and target segment the RX 470 is going after. 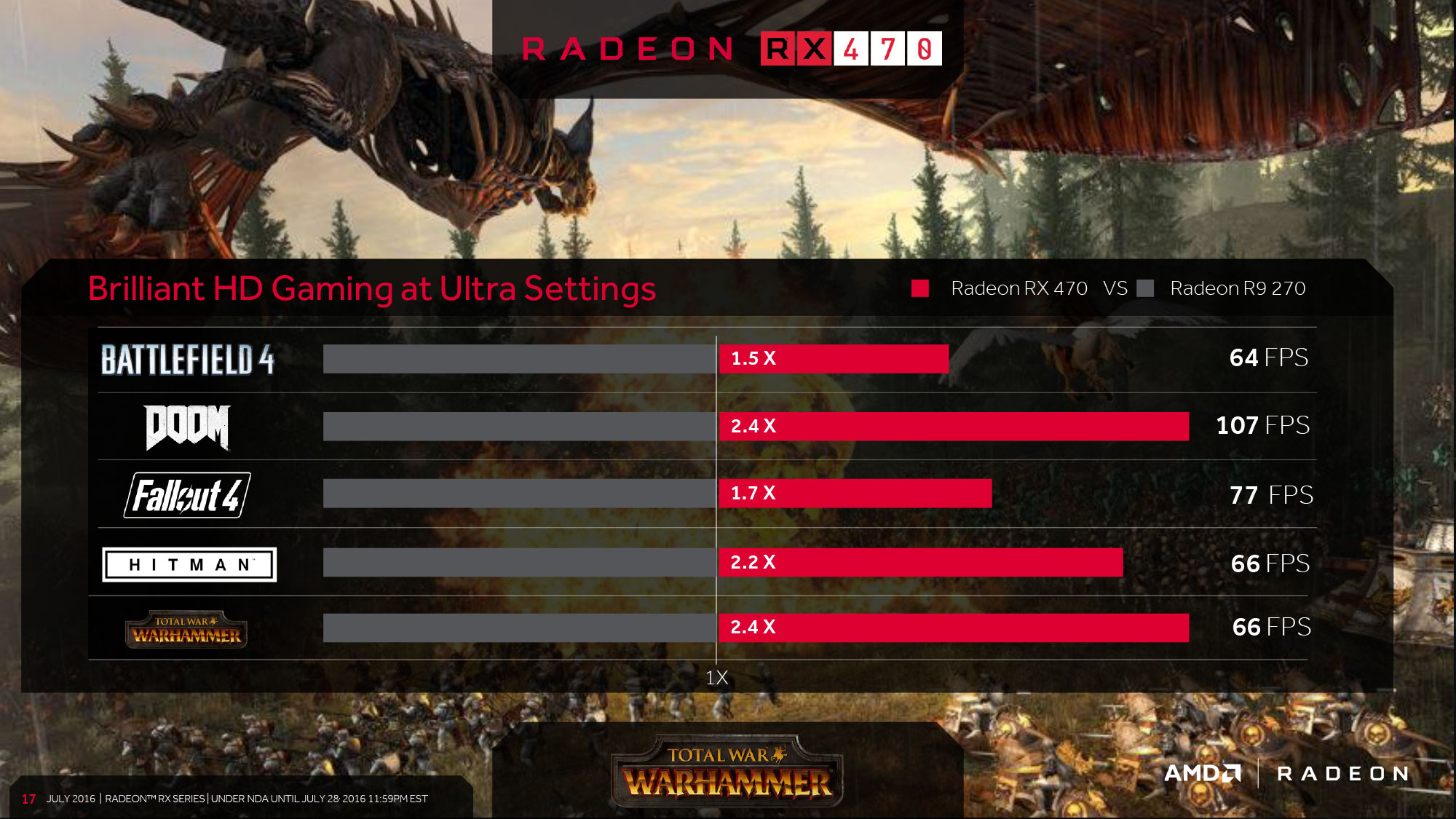 The only comparison we have from AMD pits the upcoming RX 470 against the R9 270, where Polaris offers a range from 1.5x to 2.4x improvement in a handful of titles, which include DX12 and Vulkan enabled games, of course. 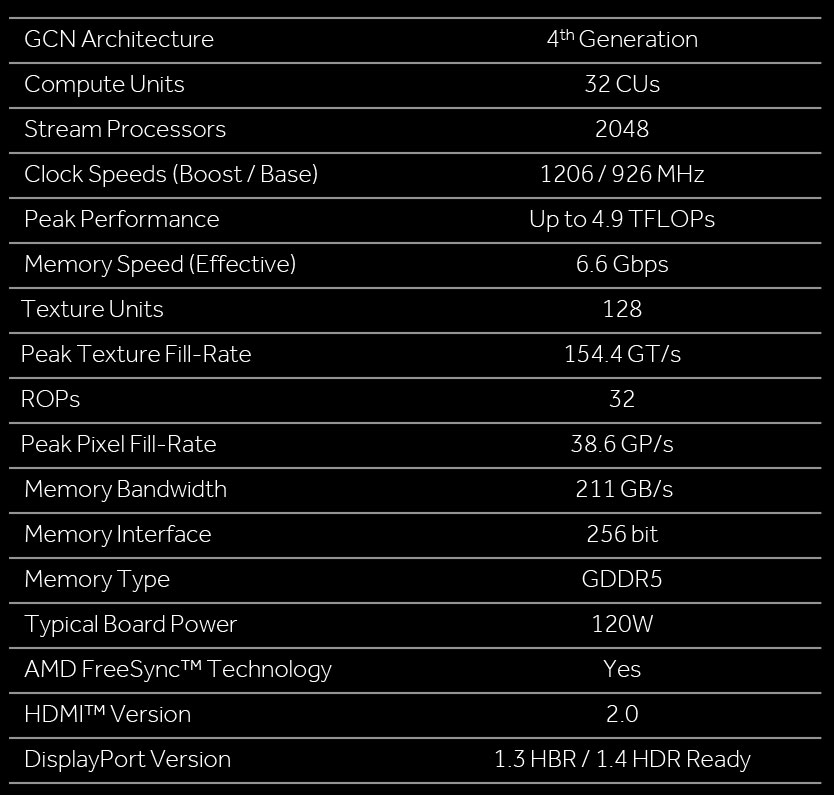 From a specifications stand point, the RX 470 will include 2048 stream processors running at a base clock of 926 MHz and a rated boost frequency of 1206 MHz. That gives us 4.9 TFLOPS of theoretical peak performance to pair with a 6.6 Gbps memory interface capable of 211 GB/s of peak bandwidth. With a 4GB frame buffer and a 120 watt TDP, the RX 470 should offer some compelling performance in the ~$150 price segment (this price is just a guess on my part… though yields should be better – they can salvage RX 480s – and partners being able to use memory chips that do not have to hit 8 Gbps should help to lower costs). 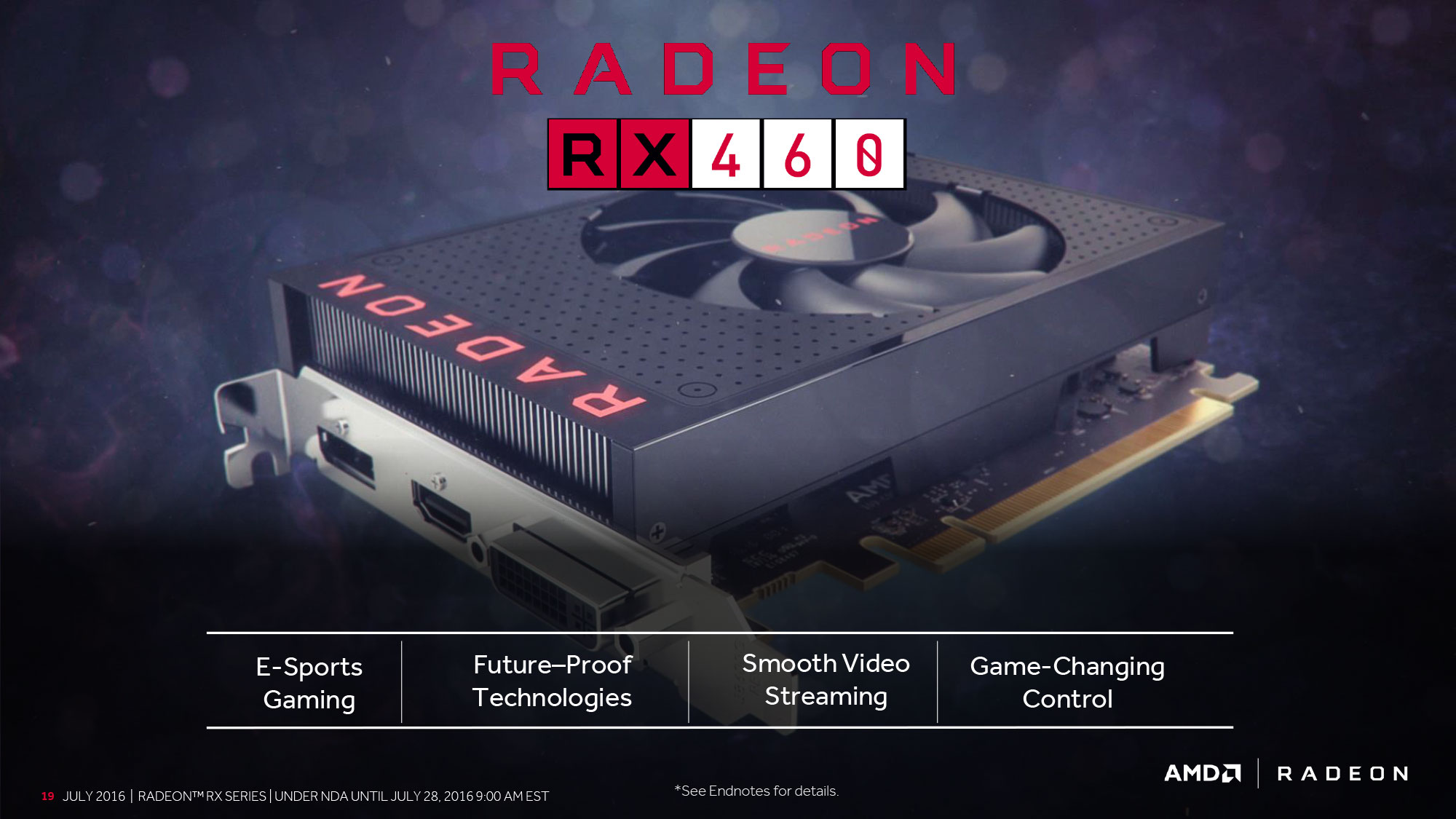 Going down another step to the Radeon RX 460, AMD is targeting this card at 1080p resolutions at "high" image quality settings. The obvious game categories here are eSports titles like MOBAs, CS: Go, Overwatch, etc. 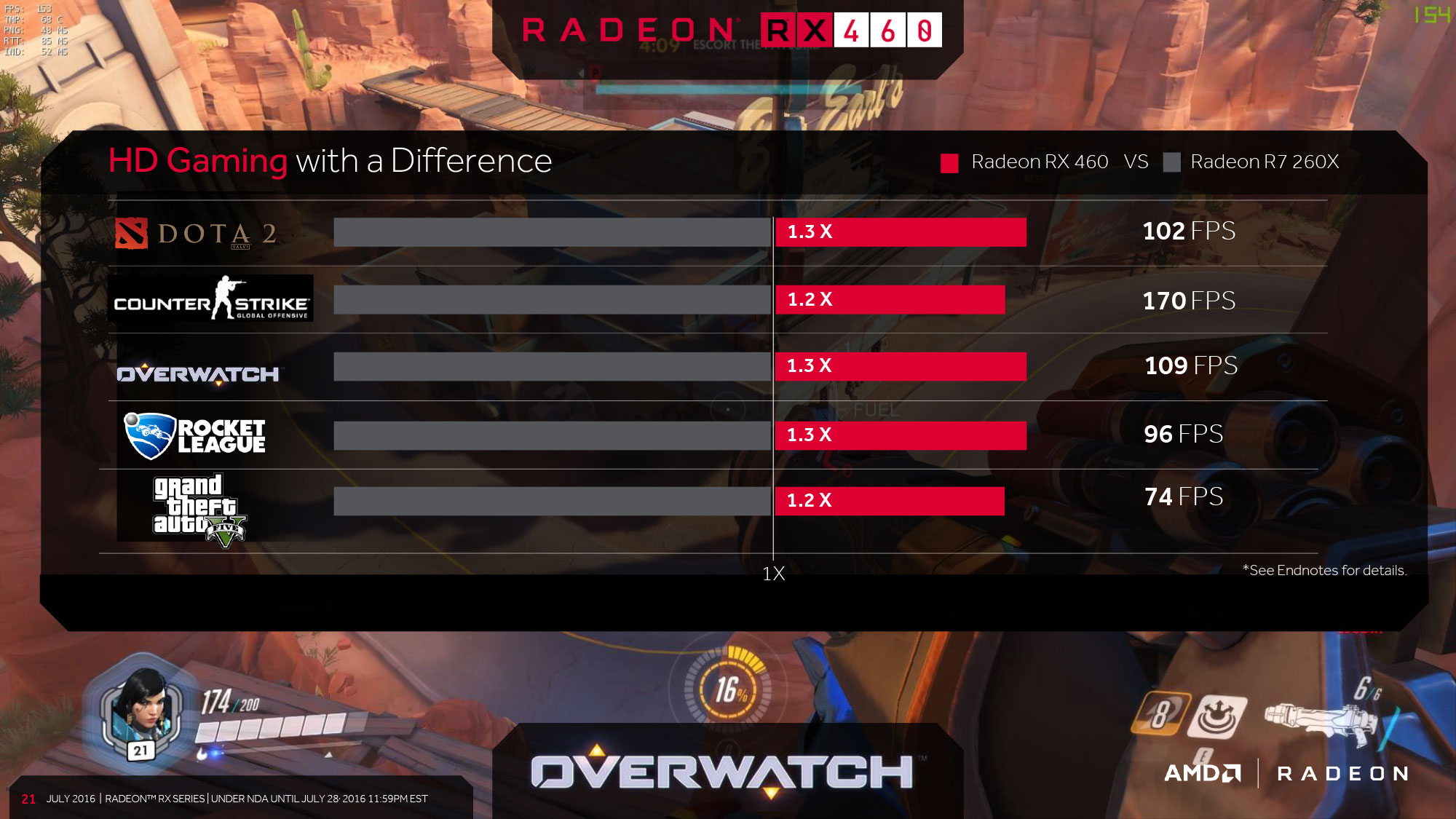 Again, AMD provides a comparison to other AMD hardware: in this case the R7 260X. You'll find a 1.2x to 1.3x performance improvements in these types of titles. Clearly we want to know where the performance rests against the GeForce line but this comparison seems somewhat modest. 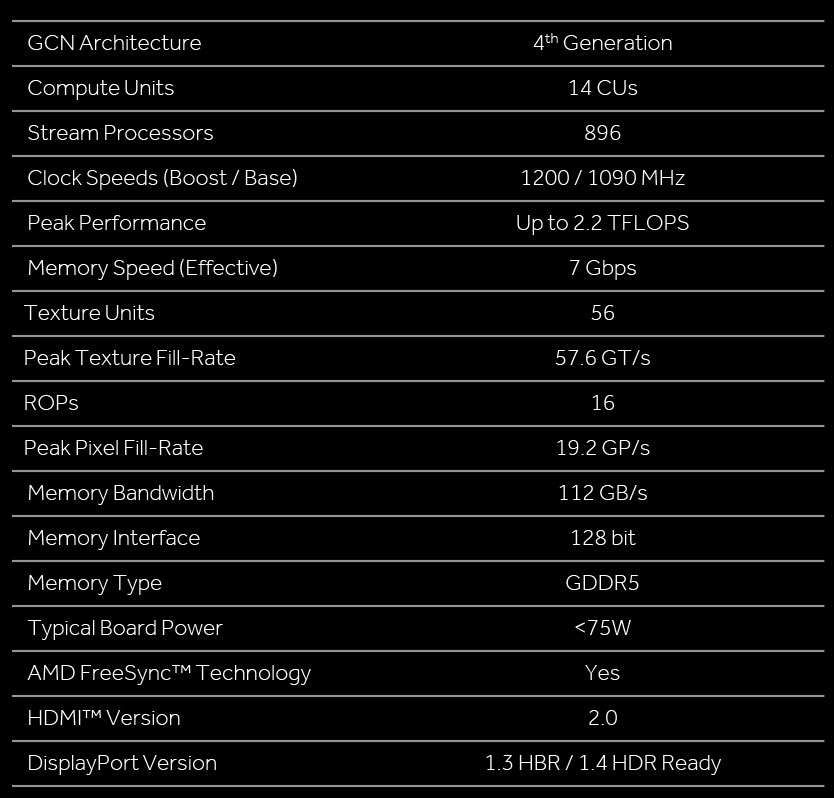 Based on the smaller Polaris 11 GPU, which is a new chip that we have not seen before, the RX 460 features up to 2.2 TFLOPS of computing capability with 896 stream processors (14 CUs enabled out of 16 total in full Polaris 11) running between 1090 MHz and 1200 MHz. The memory system is actually running faster on the RX 460 than the RX 470, though with half the memory bus width at 128-bits. The TDP of this card is sub-75 watts and thus we should find cards that don't require any kind of external power. The RX 460 GPU will be used in desktop cards as well as notebooks (though with lower TDPs and clocks).

The chart below outlines the comparison between the three known Polaris graphics processors.

There is still much to learn about these new products, most importantly, prices. AMD is still shying away from telling us that important data point. The RX 470 will be on sale and will have reviews on August 4th, with the RX 460 following that on August 8th, so we'll have details and costs in our hands very soon.

It is not clear how many or what kinds of cards we can expect to see on the August 4th and August 8th release days though it would stand to reason that they will be mostly based upon reference designs especially for the RX 460 (though Gamer's Nexus did spot a dual fan Sapphire card).. With that said, we may see custom cooled RX 470 graphics cards because while AMD does technically have a reference design with blower style cooler the company expects most if not all of its partners to go their own direction with this board including their own single and dual fan coolers.