Our worst case scenario for the Radeon RX 480, as shown by Tom’s Hardware initially, is running the Metro: Last Light benchmark at 4K. I decided this would be the place to start to see how the changes in the 16.7.1 driver affect power draw. 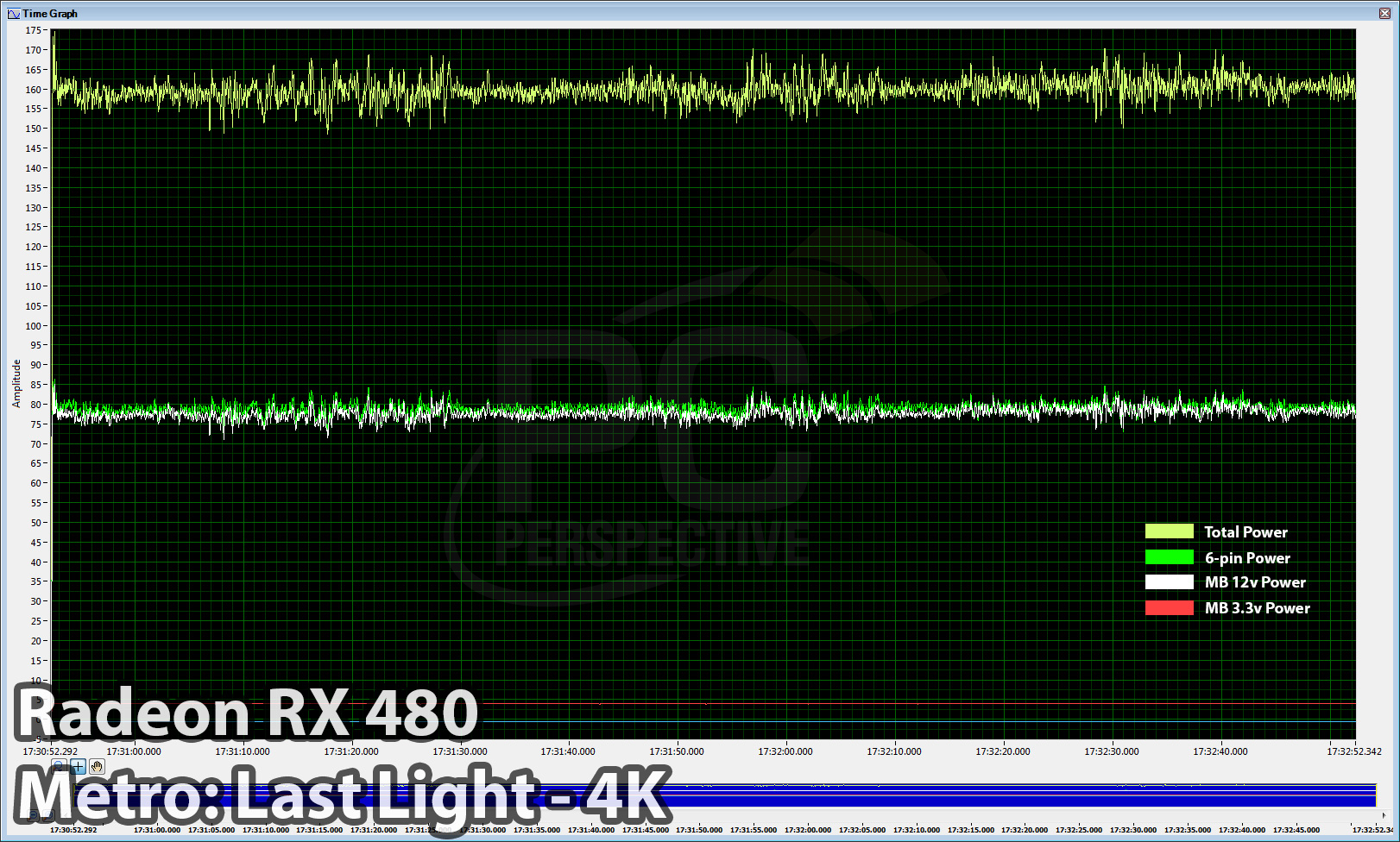 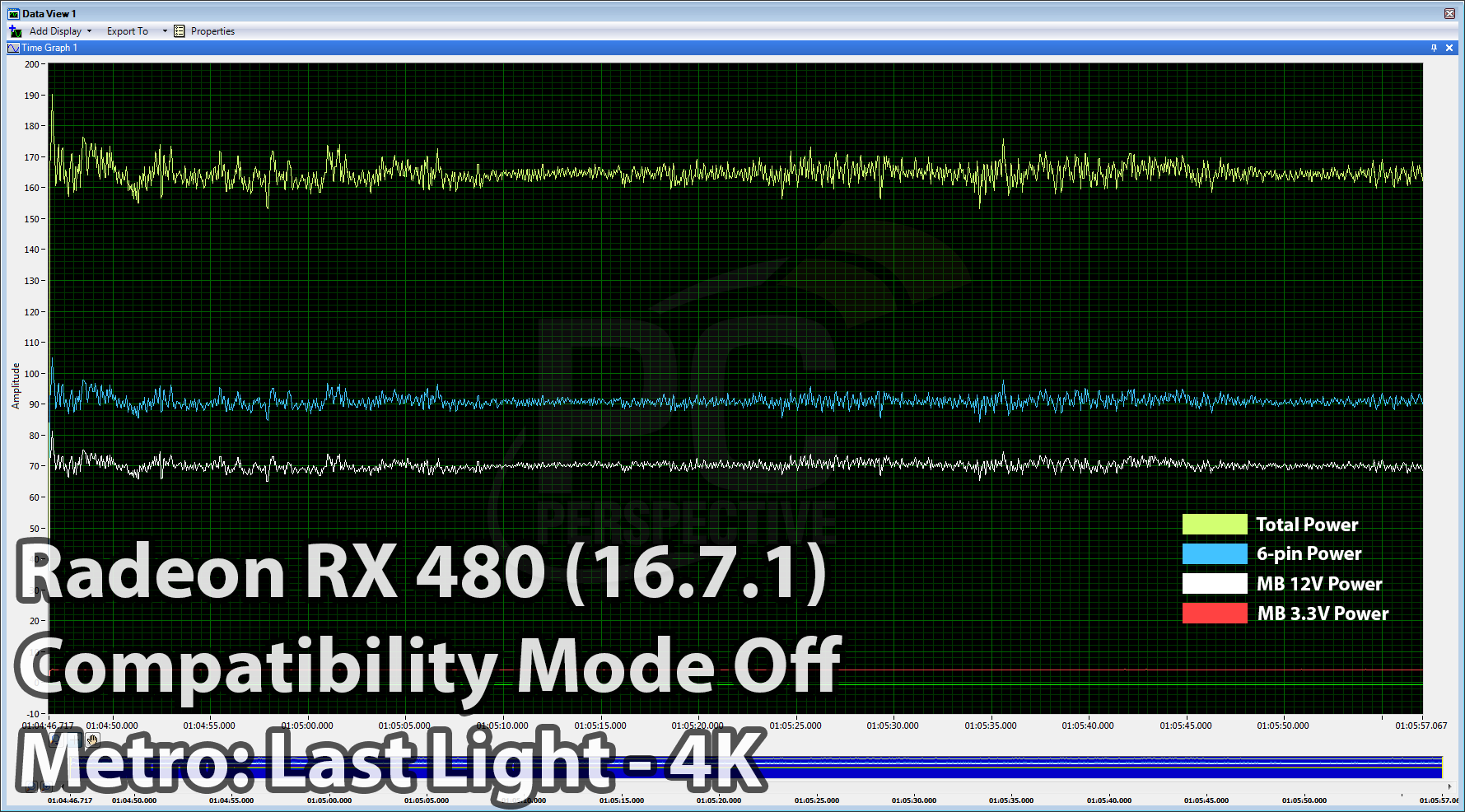 Though the colors have changed slightly (LabView is a horrendous piece of software, right), the results are immediately noticeable. The total power draw for both drivers is around the same, 160-165 watts, but the distribution of the power draw across the 6-pin and PEG slot changes. With the 16.6.2 driver, both the sources were using about 80 watts each; using the new 16.7.1 driver we measure the power draw over the PCI Express slot to be right at 70 watts while the 6-pin connection pulls just over 90 watts. Now to be fair, that 70-watt number is still higher than the 5.5A rating that the PCI Express specification puts forth (calculates to 66W), but AMD has move things much closer with this release. 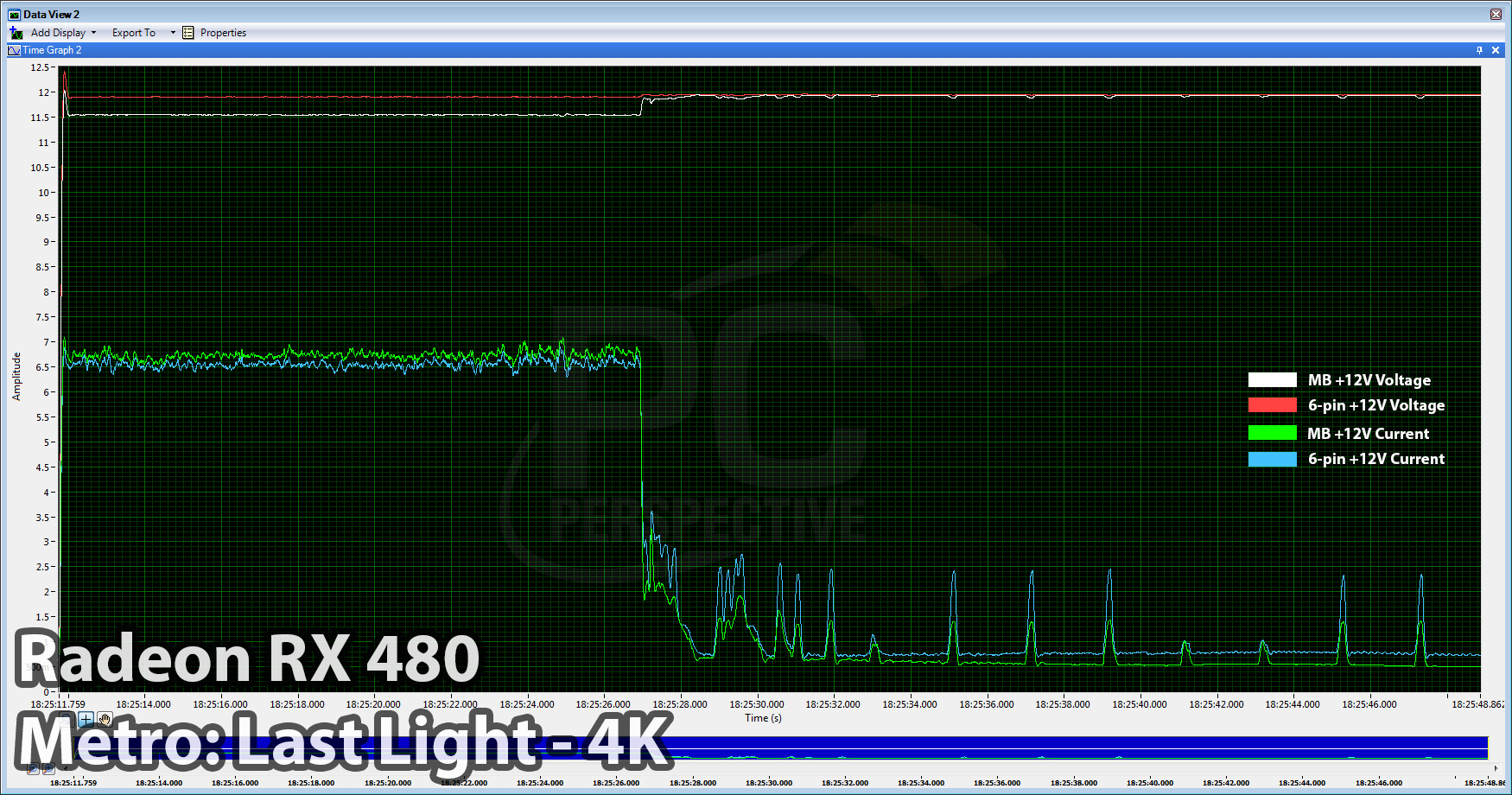 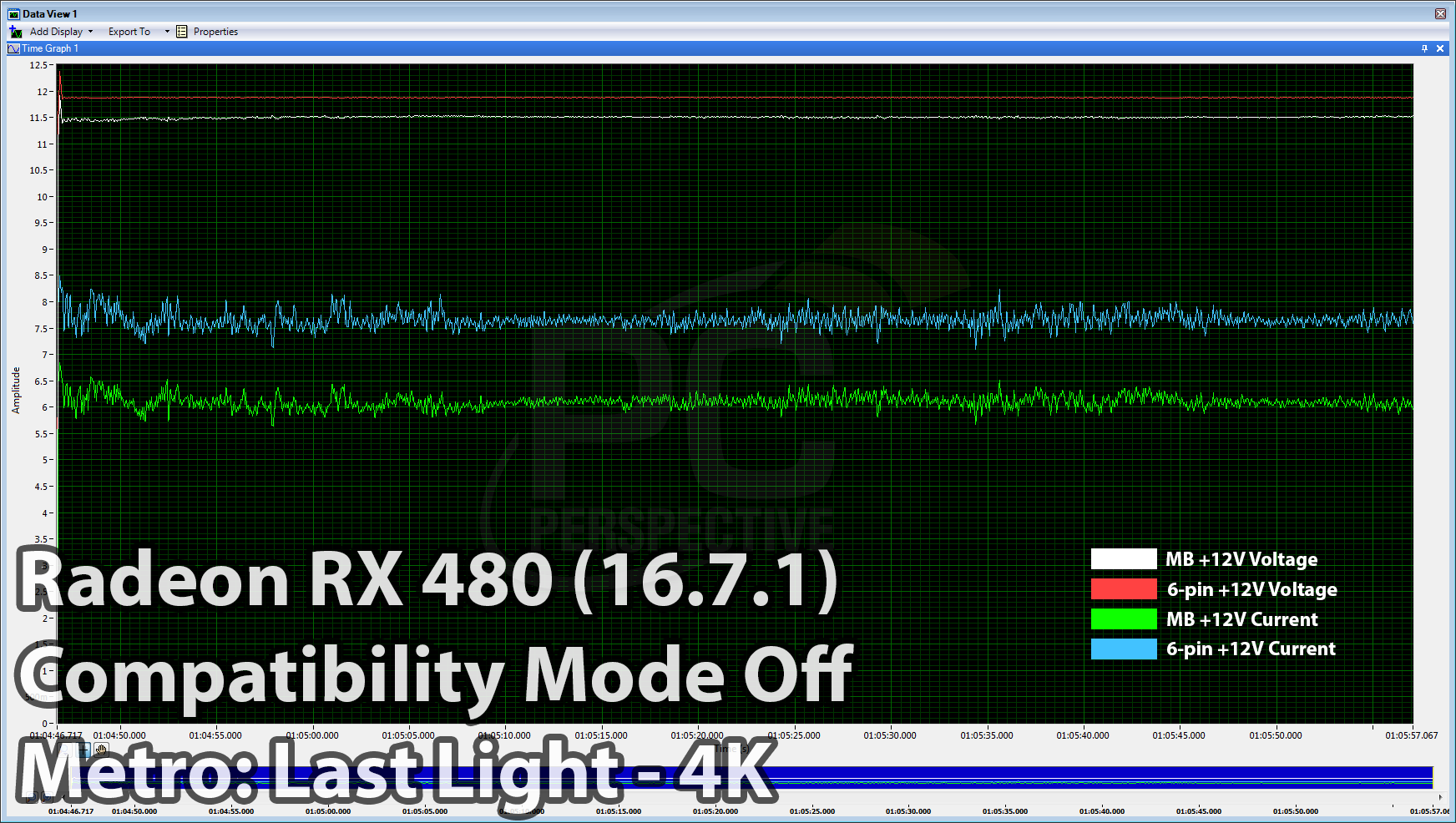 What does that result look like from a current draw perspective? With the original launch driver we saw the PEG slot pulling 6.8A or more, with the 6-pin pulling closer to 6.6A. On 16.7.1 the PEG slot draw rate drops to 6.1-6.2A. Again, that is still above the 5.5A rated maximum for the slot, but the drop is significant.

What happens if we enable that Compatibility Mode switch? 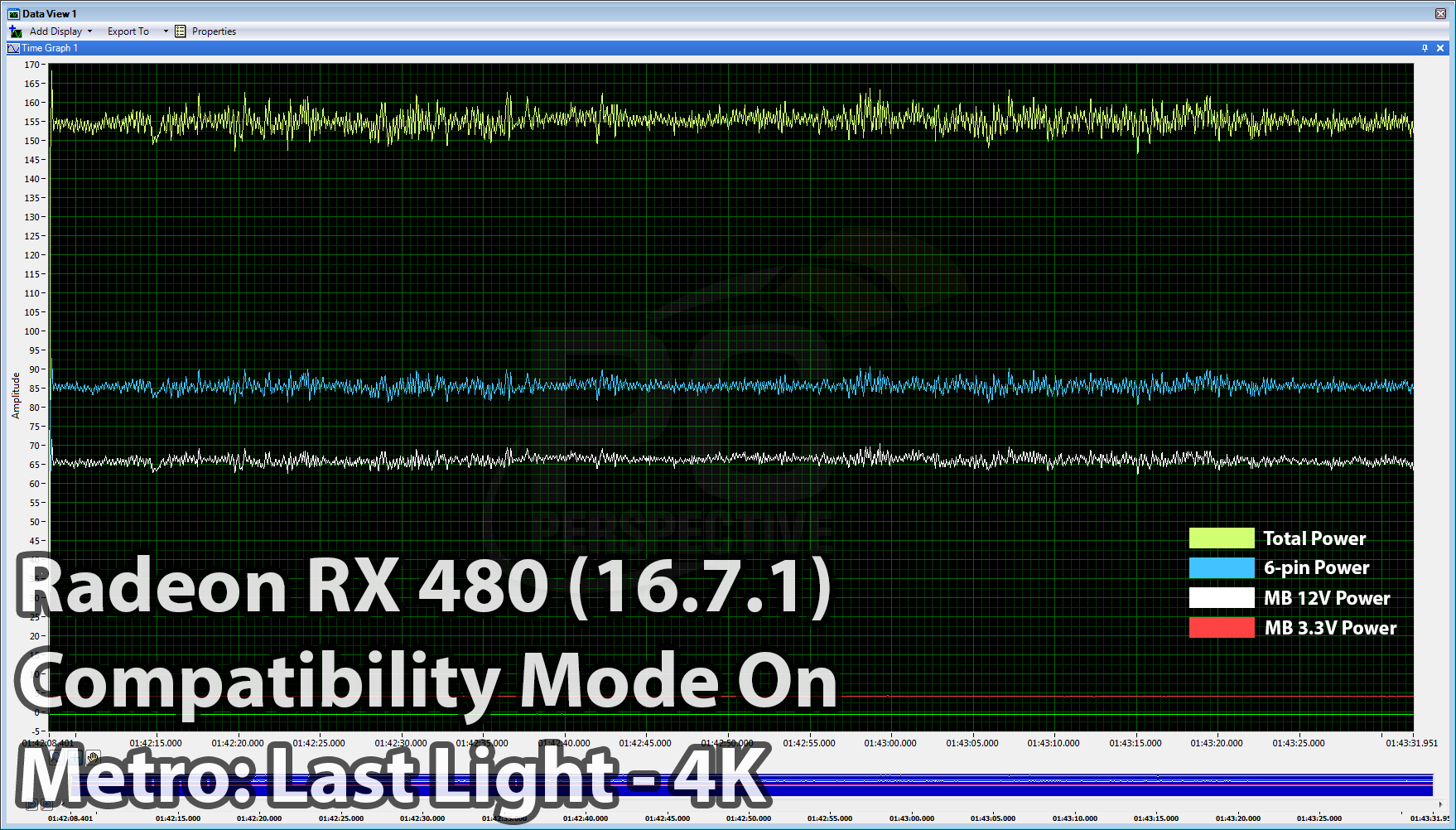 Measuring power consumption of the card with the new driver and the compatibility mode set to on, another drop is seen. This time, with the same game and settings, power draw falls to 155 watts total, an 8-10 watt decrease over the 16.6.2 driver. Power from the PEG slot falls to 66-67 watts, nearly hitting the target calculated from the PCI Express specification, while power on the 6-pin hits 85-86 watts. 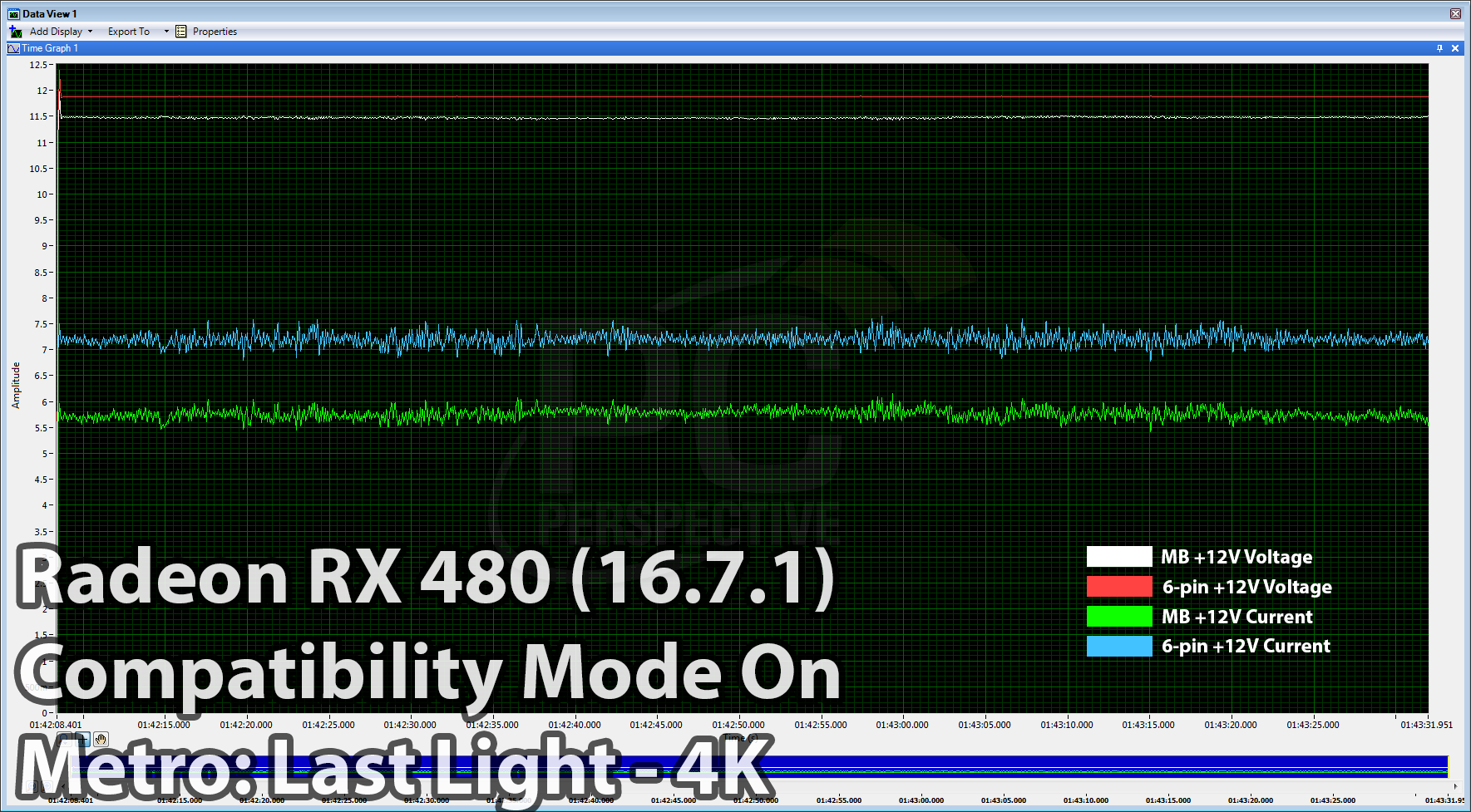 Current still doesn’t make it down to 5.5A in our testing, but the PEG slot is now pulling 5.75A in our worst case scenario, more than a full amp lower than measured with the 16.6.2 launch driver. 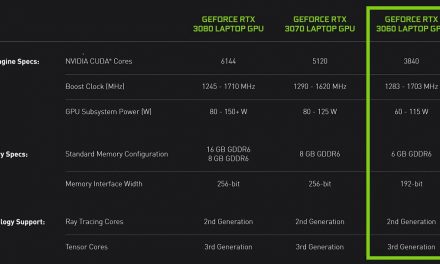