At a launch event in Australia earlier this week AMD talked about its Polaris architecture, launched the RX 480 and revealed the specifications for the Polaris 10-based RX 470 and Polaris 11-derived RX 470 GPUs. The new budget GPUs are aimed at 1080p or lower gaming and will allegedly be available for purchase sometime in August.

First up is the AMD Radeon RX 470. This GPU is based on Polaris 10 (like the RX 480) but has some hardware disabled (mainly the number of stream processors). Based on the same 14nm process the GPU has 2,048 cores running at not yet known clocks. Thankfully, AMD has left the memory interface intact, and the RX 470 uses the same 256-bit memory bus pairing the GPU with 4GB of GDDR5 memory on the reference design and up to 8GB GDDR5 on partner cards.

Speaking of the reference design, the reference RX 470 will utilize a blower style cooler that AIBs can use but AMD expects that partners will opt to use their own custom dual and triple fan coolers (as would I). The card is powered by a single 6-pin power connector though, again, AIBs are allowed to design a card with more.

This card is reportedly aimed at 1080p gaming at "ultra and max settings". Video outputs will include DisplayPort 1.3/1.4 HDR support. 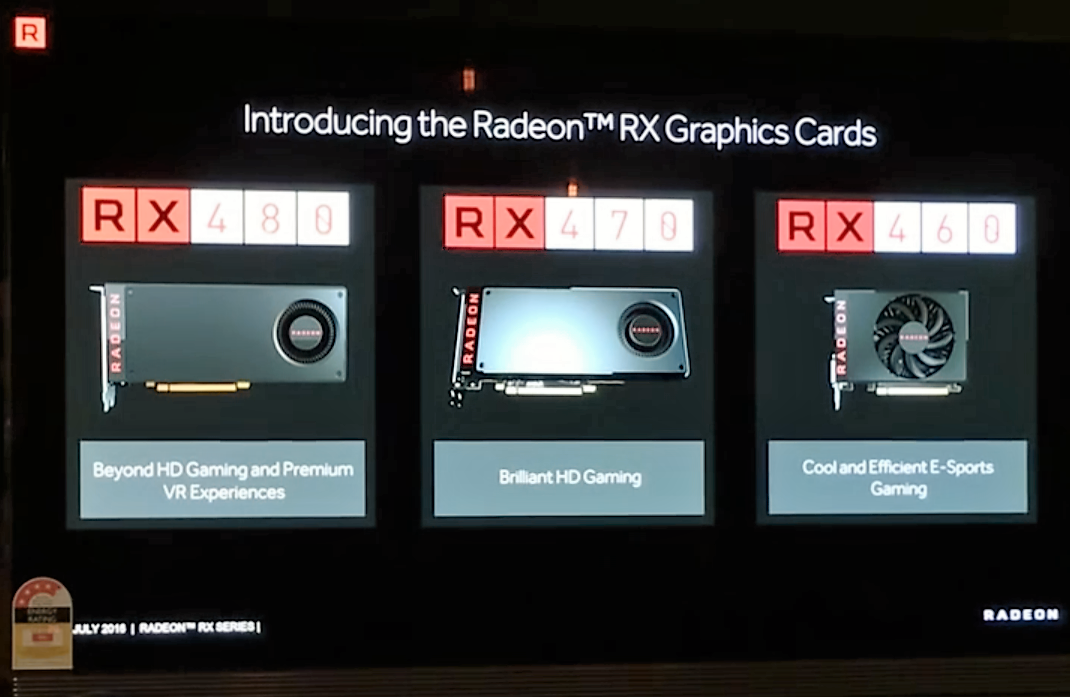 Breaking away from Polaris 10 is the RX 460 which is the first GPU AMD has talked about using Polaris 11. This GCNv4 architecture is similar it its larger Polaris sibling but is further cut down and engineered for low power and mobile environments. While the "full" Polaris 11 appears to have 16 CUs (Compute Units), RX 460 will feature 14 of them (this should open up opportunities for lots of salvaged dies and once yields are good enough we might see a RX 465 or something with all of its stream processors enabled). With 14 CUs, that means RX 460 has 896 stream processors (again clock speeds were not discussed) and a 128-bit memory bus. AMD's reference design will pair this card with 2GB of GDDR5 but I would not be surprised to see 4GB versions possibly in a gaming laptop SKU if only just because it looks better (heh). There is no external PCI-E power connector on this card so it will be drawing all of its power from the PCI-E slot on the motherboard.

One other tidbit of information from the announcement was that AMD reiterated their new "RX" naming scheme saying that RX would be reserved for gaming and we would no longer see R9, R7, and R5 branding though AMD did not rule out future products that would not use RX aimed at other non-gaming workloads. I would expect that this will apply to APU GPUs eventually as well.

What do you think about the RX 470 and RX 460? If you are interested in watching the whole event, there is a two part video of it available on YouTube. Part 1 and Part 2 are embedded below the break.