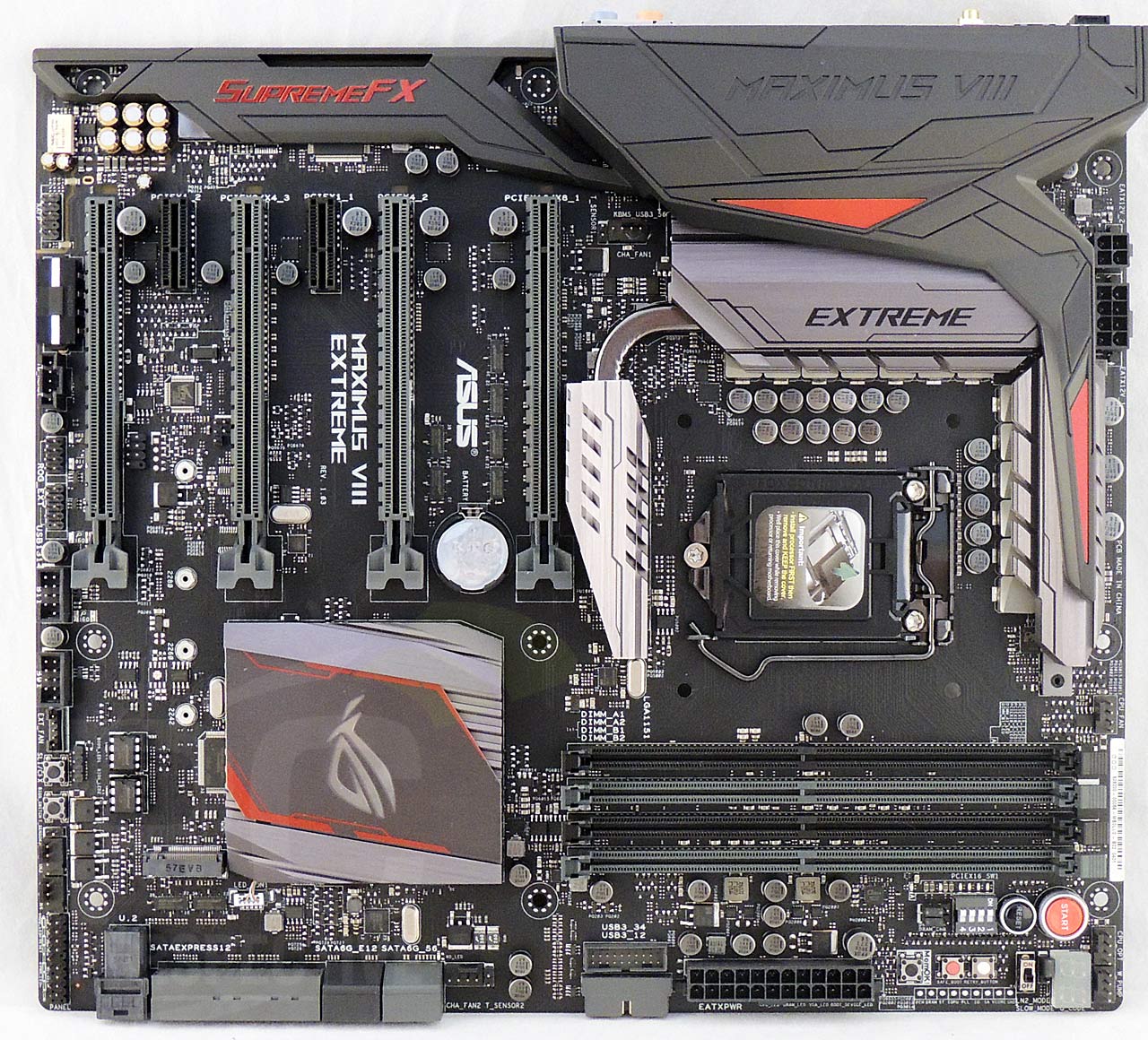 The Maximus VII Extreme features the latest ROG aesthetics, featuring base black PCB and chrome black heat sinks with red accents. The board name is split between the rear panel cover and VRM heat sink just above the CPU with the ROG logo prominently emblazoned on the Z170 chipset heat sink. The board was designed with an E-ATX form factor to accommodate all the integrated features with enough space provided to easily access those components. 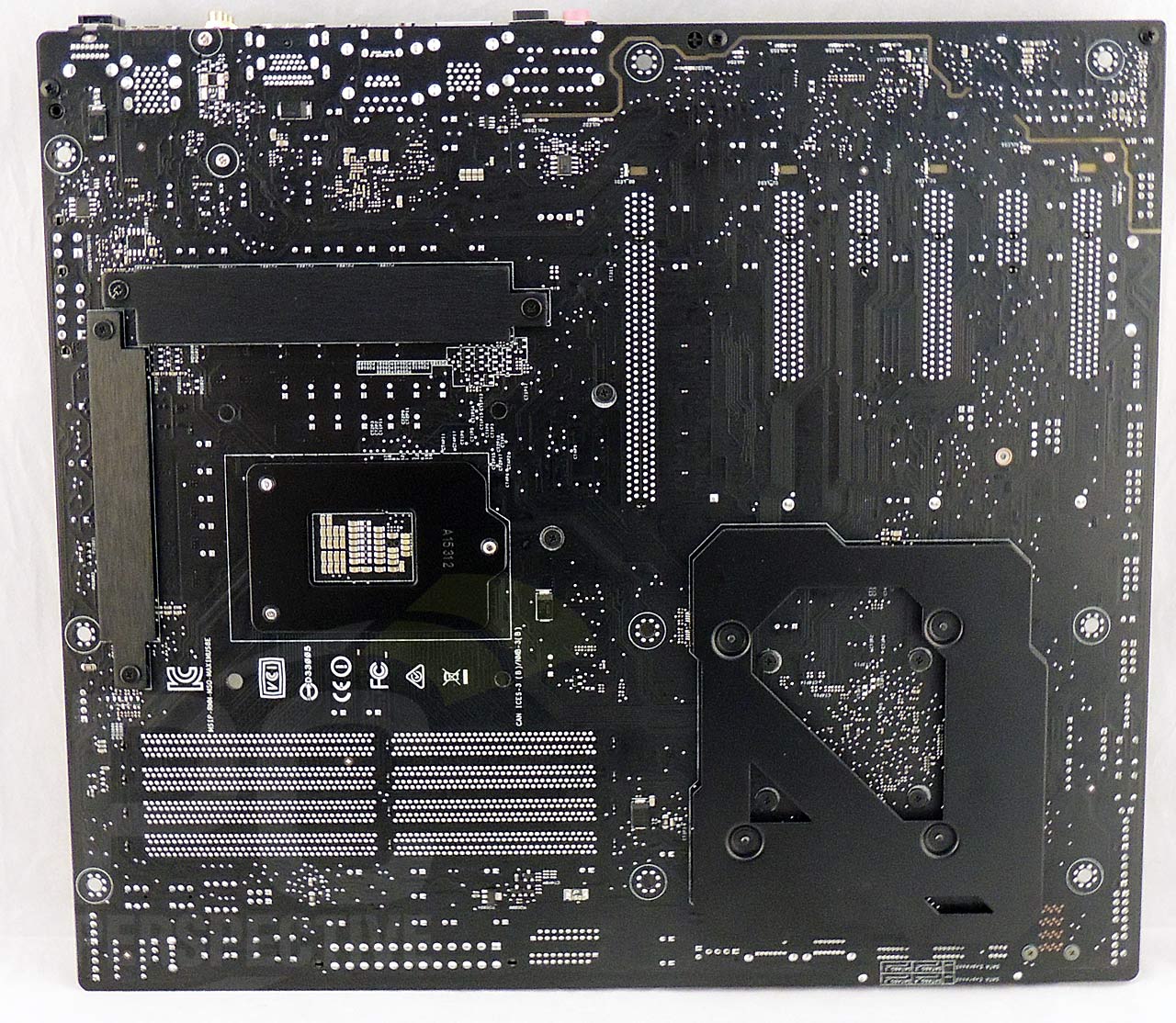 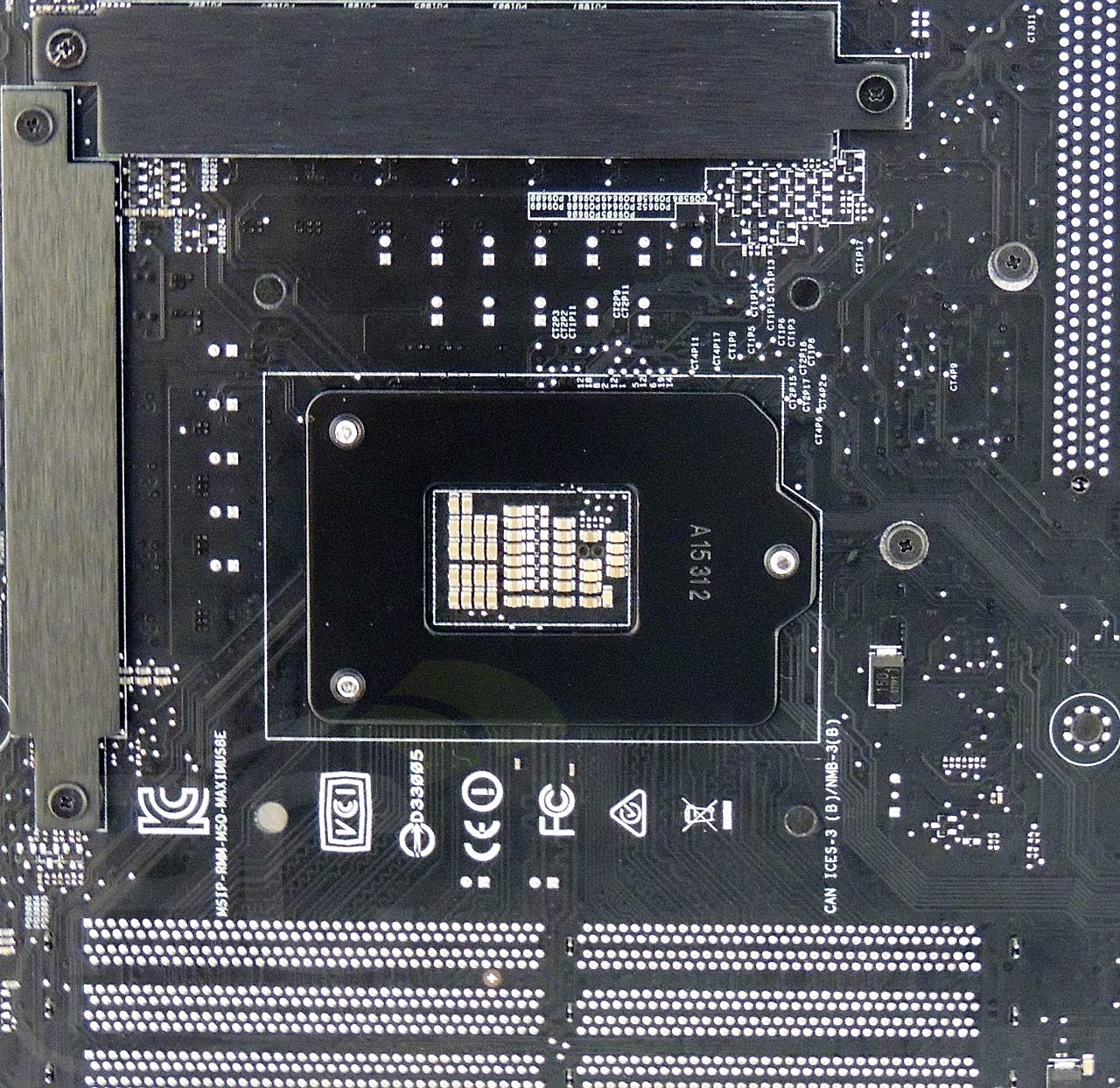 The board's back contains covers over the areas behind the CPU VRMs as well as the Z170 chipset, covering most of the exposed circuitry on the back of the board. These aluminum plates also provide a secondary heat dissipation path for the components on the top of the board. The area directly behind the CPU socket is clear of components, alleviating the risk to the board when using overly large backplates.

The Maximus VIII Extreme motherboard includes the following ports integrated into its rear panel assembly: a PS/2 keyboard/mouse port, four USB 3.0 ports, four USB 3.1 ports (3 Type-A and 1 Type-C), one RJ-45 port tied to the Intel I219-V controller, ASUS Wi-Fi GO! modules featuring three ports tied 802.11ac Wi-Fi controller, a DisplayPort video port, an HDMI video port, a BIOS reset button, the USB BIOS Flashback button, an optical audio port, and five analogue audio ports. All blue colored USB 3.0 ports are controlled by the Intel Z170 controller. The USB 3.1 ports to the left of the 802.11ac ports are controlled by the integrated ASMedia controller with those directly underneath the RJ-45 port controlled by the Intel Thunderbolt 3 controller. For the USB 3.0 ports underneath the PS/2 port, the top port is used in conjunction with the ASUS Keybot II software with the bottom used in conjunction with the USB BIOS Flashback functionality.

The USB BIOS Flashback button can be used to re-flash the BIOS without having to boot the system into the UEFI BIOS interface or a command-line mode interface. Simply plug in a USB drive containing the proper BIOS file in the root of the drive into the lower USB 3.0 port (blue colored) located beneath the PS/2 port and power on the system. As the BIOS is updated, the LED flashing frequency increases. Once the LED goes out, the flash operation is completed and the board can be booted. Note that if the BIOS Flashback LED flashes for 5 seconds and then glows solid, it means that something went wrong with the flashback operation. Check the USB drive for the the BIOS file in the root and make sure that the BIOS file is named correctly. BIOS Flashback looks for a specific filename and file format when attempting to replace the on-board BIOS. According to the user manual, the BIOS file in the root of the flash drive must be named M8E.CAP for the BIOS Flashback applet to successfully re-flash the board's BIOS. 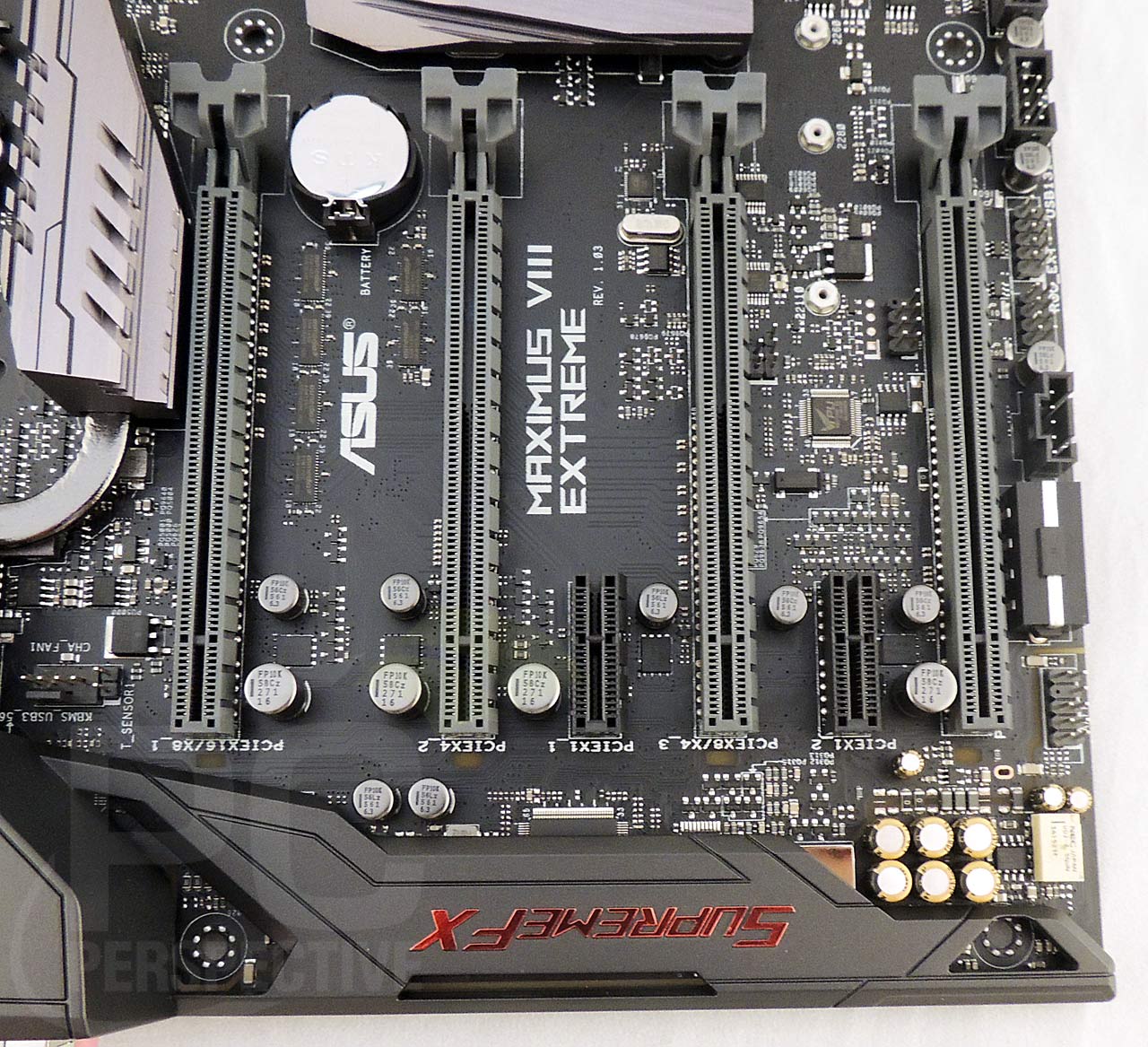 The board's integrated audio components are covered by a plastic overlay just above the PCIe ports with the SupremeFX logo stamped into its surface in red chrome coloring. The audio subsystem lives on an isolated PCB to minimize line-noise and distortion caused by other integrated components. The PCB separator line glows red along its length when the board is powered, keeping to the board's ROG-inspired color scheme. ASUS included the following audio components into the sound systems design: an ESS ES9023P DAC (digital-to-analogue converter), Nichicon audio capacitors, a 2 Vrms headphone amplifier, Sonic SenseAmp for automatic headphone impedance detection, and a de-pop relay to prevent popping when audio components are connected and/or disconnected from the board. The audio output header is located to the lower right of the overlay along the board's edge.

In the upper left corner of the board (and along the outer edge of the PCIe x16 slot 4) are the front panel audio header, the EZ Plug power port, and the Thunderbolt 3 header. The EZ Plug power port can be used to supply extra power to the PCIe bus when multiple cards are plugged into the board's PCIe ports. To use, you simply plug in a MOLEX power connector from your PSU. 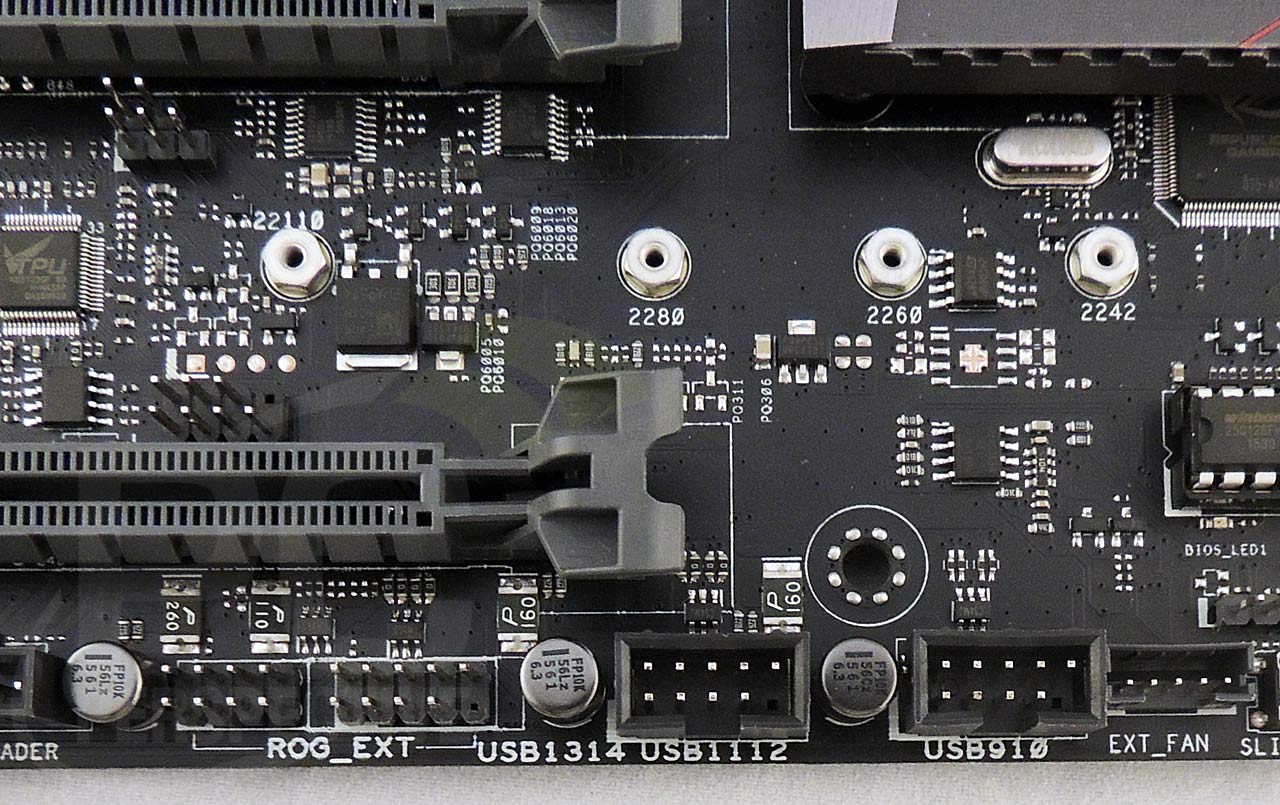 The OC Panel headers (labeled ROG_EXT), USB 2.0 headers, and external fan device header are located to the lower left of the PCIe x16 slot 4. The lower header in the ROG_EXT group can be used for two additional USB 2.0 ports if the OC Panel II device is not connected to the system. The OC Panel cable (bundled in with the ROG OC Panel device) connects to the ROG_EXT ports, allowing the ROG OC Panel II device to interact with the board. The external fan device header can be used to add additional fan and temperature ports by connecting the external fan board to the header using the included cable. 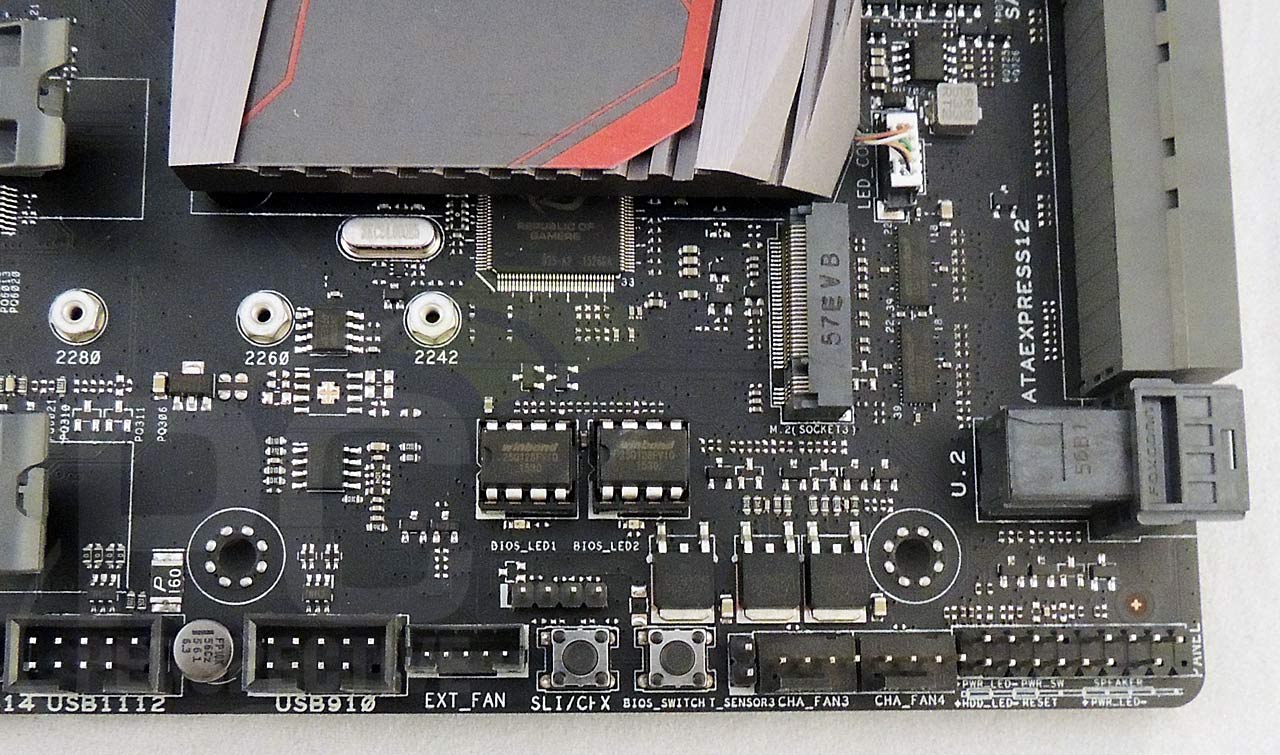 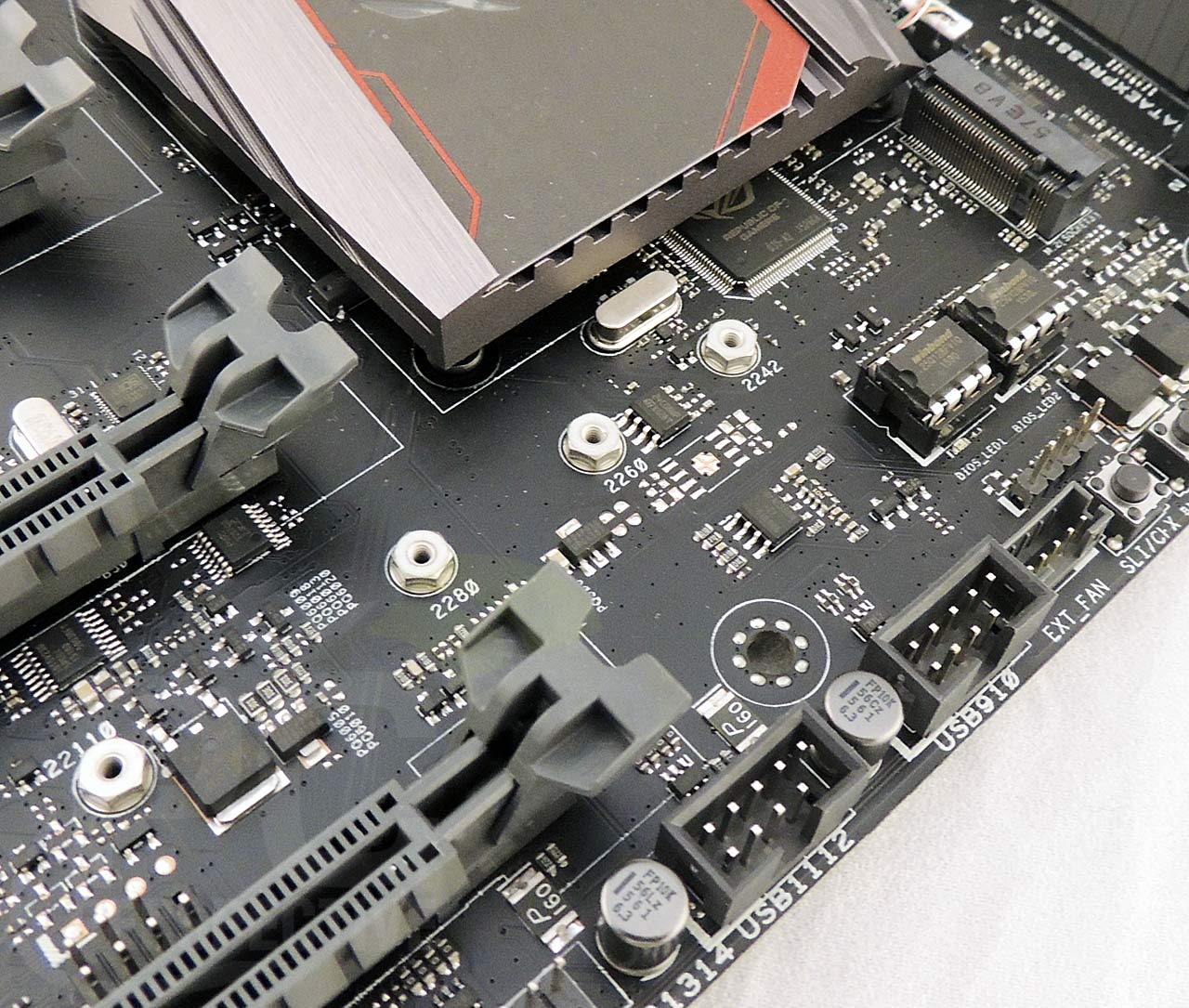 The multi-GPU button (SLI/CFX), BIOS switch button, temperature sensor header, chassis fan headers, front panel header, and PCIe x4 M.2 slot are located in the lower left corner of the board. The M.2 port supports M-Key style M.2 SSDs with PCIe or SATA interfaces and length of up to 120mm. The multi-GPU button illuminates LEDs next to the PCIe x16 slots, indicating which slots to use for dual, triple, and four card mode when pressed. Note that this functionality only works with the board powered off. The BIOS switch button switches between the board's main and backup BIOSes with the active BIOS indicated by an LED to the left of the BIOS chips. 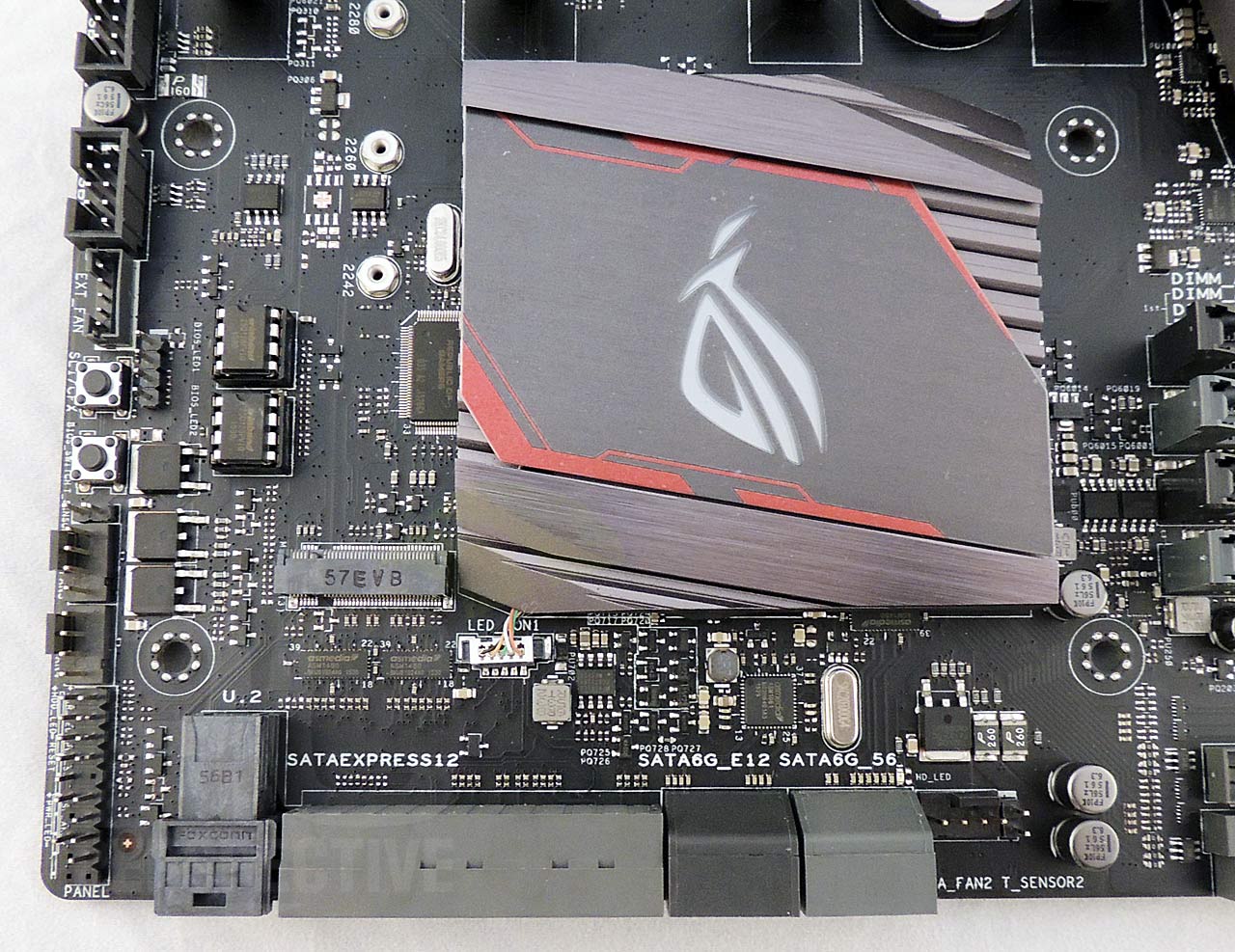 The Intel Z170 chipset is cooled by a low-profile black chromed heat sink with an embedded ROG logo in its center. Laying directly underneath the logo is an RGB led that can be configured for color and mode using the ASUS Ambient LED applet. To the lower right of the chipset are a chassis fan header and temperature sensor header. 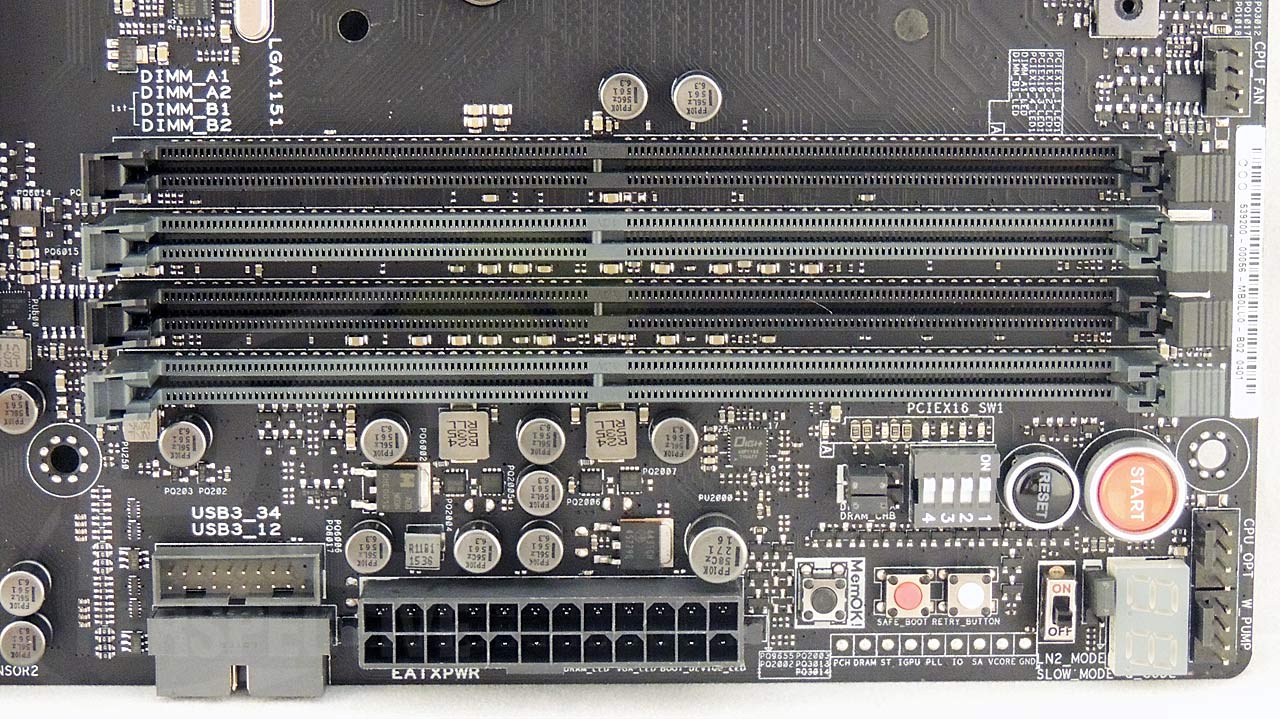 The four on-board DDR4 memory slots are located just below the CPU socket in the lower right quadrant of the board. Dual Channel memory mode is enabled by seating memory modules in like colored slots with slots 2 and 4 (the gray colored slots) being the primary memory slots. The board supports up to 64GB of memory running at a maximum speed of 3800MHz. Note that memory speeds above 2133MHz are considered overclocked speeds and are outside of the official Intel stock memory speed specifications. Directly below the memory port block are two USB 3.0 headers and the 24-pin ATX power connector. 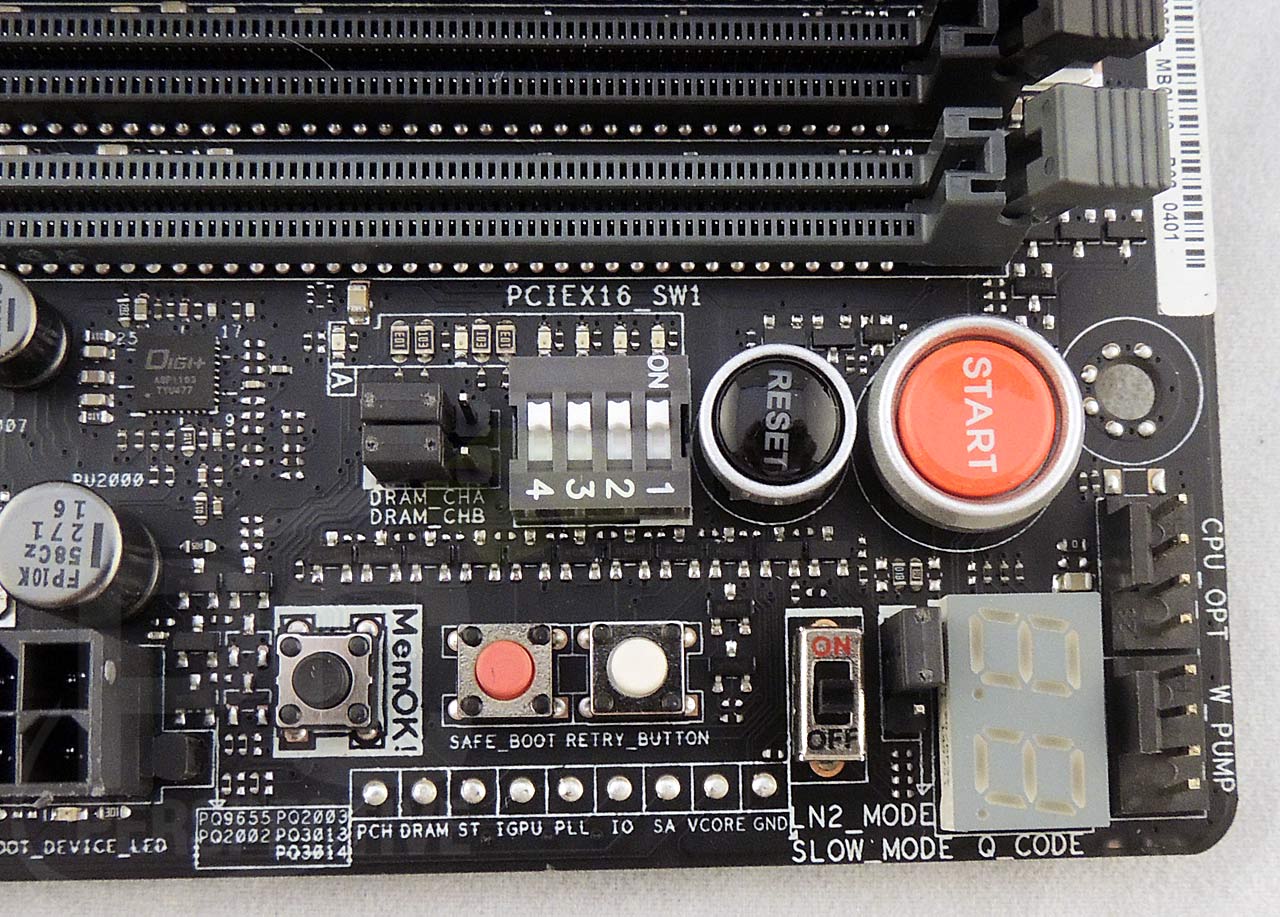 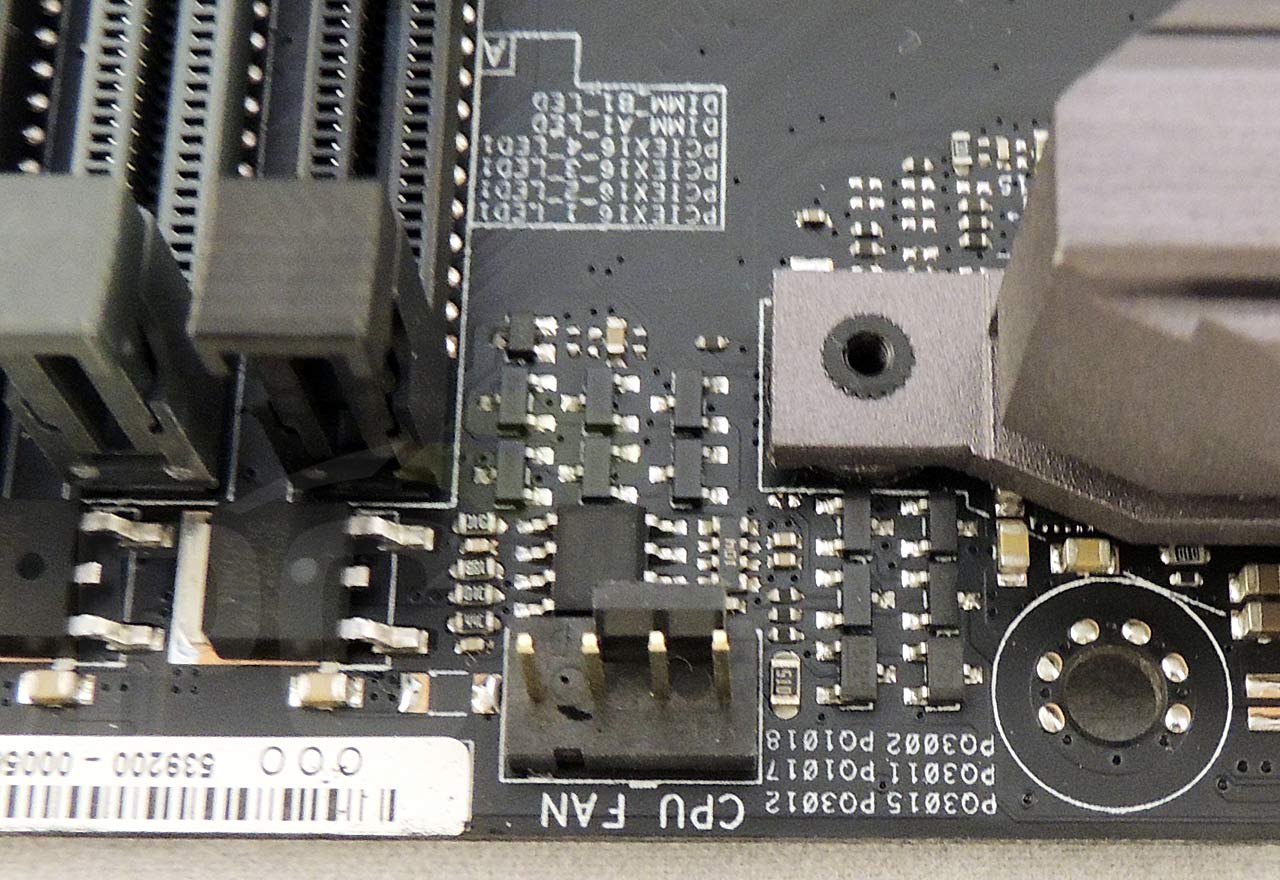 To the lower right of the DIMM slots are the MemOK!, Safe Boot, ReTry, Start, and Reset buttons, the Slow Mode switch, the PCIe Lane switch block, the DRAM channel and LN2 mode jumpers, the 2-digit diagnostic display, the Probelt voltage measurement points, and the secondary CPU and water pump 4-pin fan / power headers. The 4-pin CPU fan header is located to the upper right of the DIMM slots. The 4-pin water pump header can be used to power an AIO cooler's integrated coolant pump (labeled W_PUMP) The MemOK! button can be used to reset memory-related BIOS settings to defaults, useful when the system doesn't boot because of memory options set over-aggressively. The ReTry button can be used to attempt system reboot that locked up during the initialization process, while retaining the previously set UEFI settings. The Safe Boot button forces a system reboot, enacting a direct to UEFI boot using factory set "safe" settings while retaining the previous settings in the UEFI pages for modification. The 2-digit diagnostic display can be used for debugging system issues during system initialization. The displayed debug codes can be decoded using the table from the motherboard manual. The Probelt voltage measurement points allow for direct board voltage measurement using a volt meter.

For sub-zero enthusiasts, ASUS integrated key functions into the board's design to aid in getting the best performance possible. The LN2 Mode jumper enables a cold bug fix that can be encountered when attempting to boot a CPU at sub-zero temperatures. The Slow Mode switch can be used to automatically slow the system boot process and CPU frequency to help prevent system crashing at extreme cooling speeds. The PCIe Lane switch block can be used to individually disable the PCI-Express x16 slots. 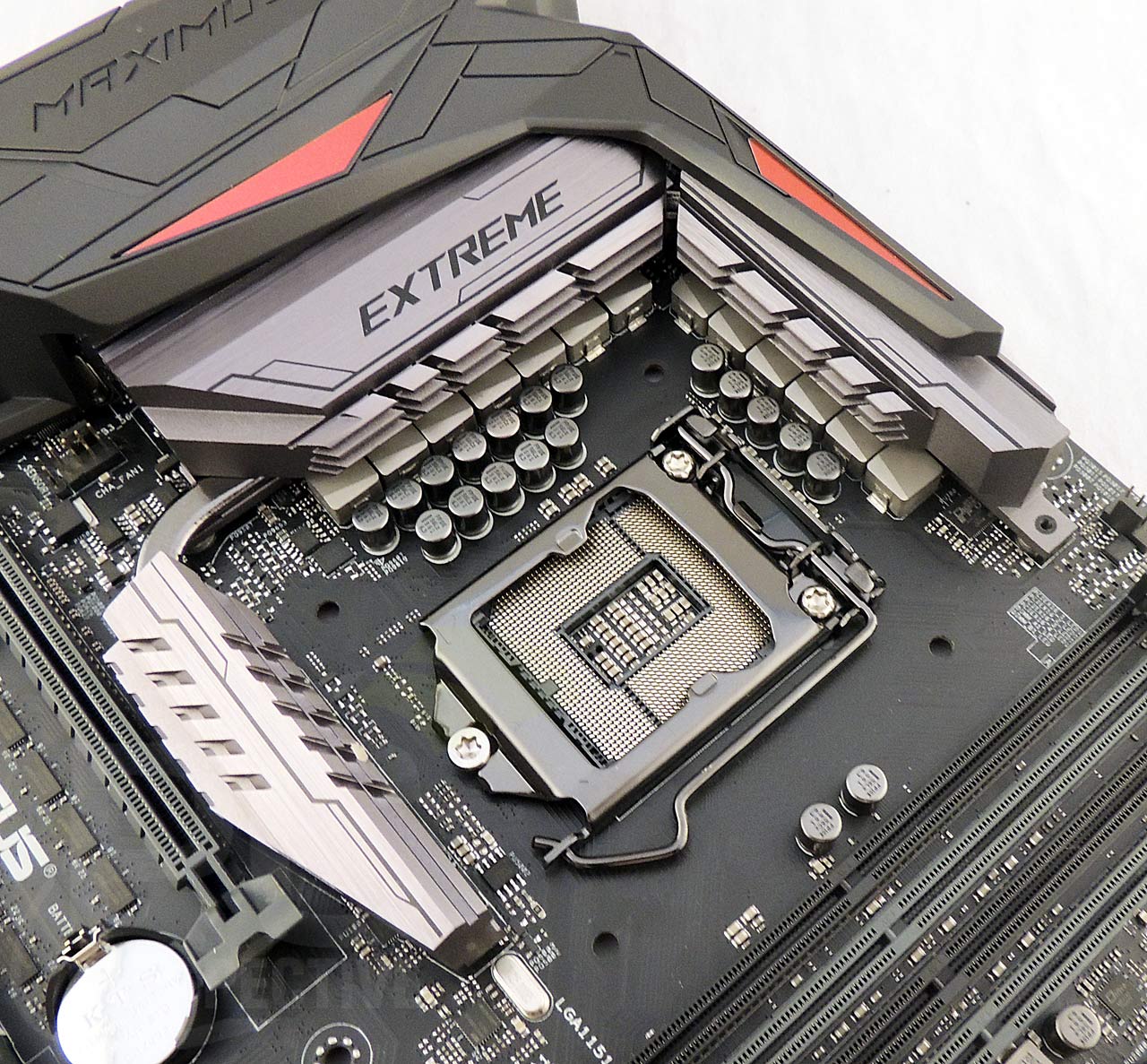 The CPU socket area is clear of obstructions allowing for use of most coolers without issue with the board. The board was desinged with a full 13 power phases for CPU and integrated GPU power delivery requirements, providing more than enough power for any overclocking ambitions. The VRMs are cooled by large passive aluminum heat sinks to the upper and right sides of the CPU socket. The heat sink to the left of the CPU socket cools the PLX chip, providing extra PCIe lanes for multi-GPU operation. Notice that the VRM's chokes have integrated metal covers with ridges to aid in passive cooling. 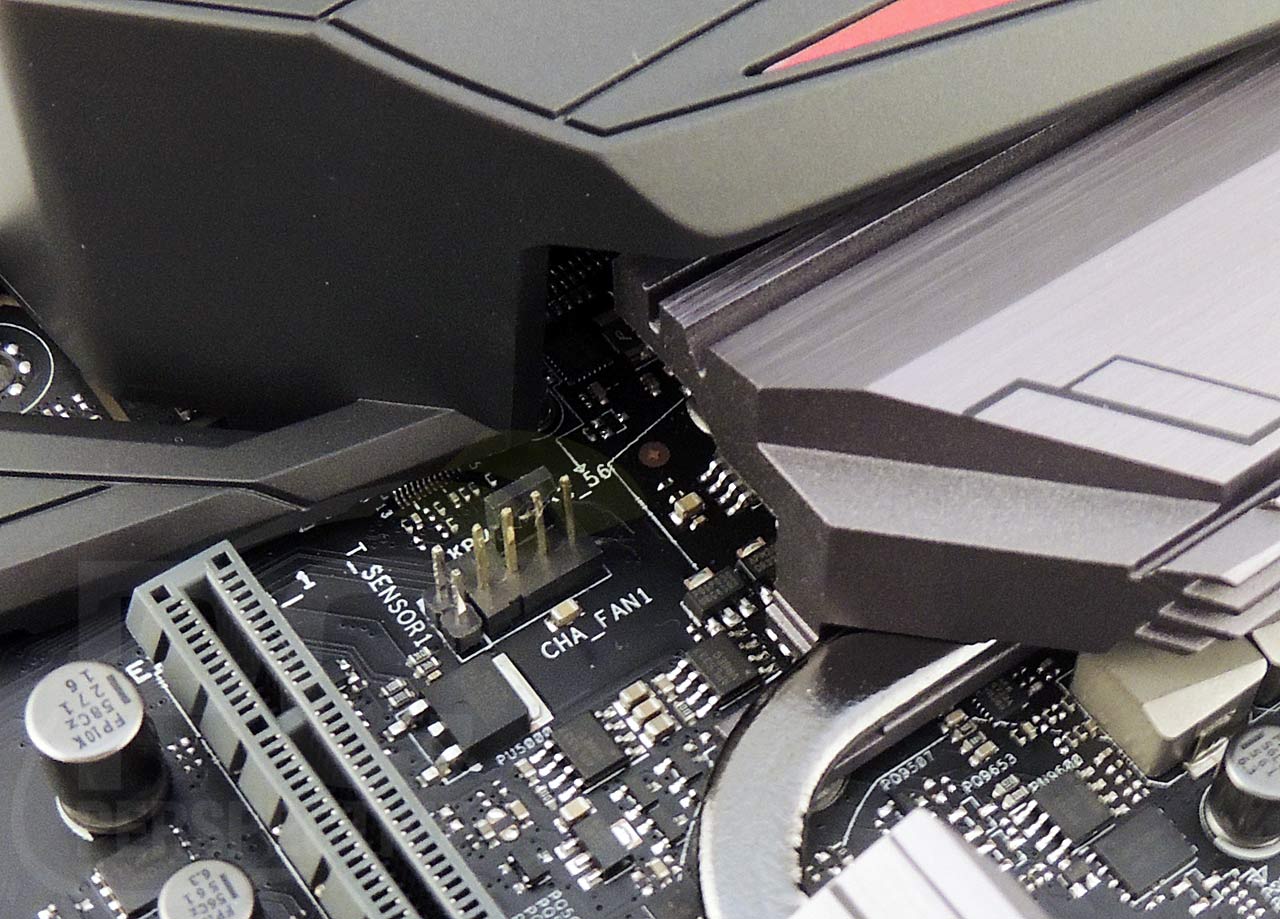 A 4-pin chassis fan headers is located to the upper left of the CPU socket, outside the heat pipe connecting the wrap-around heat sink. 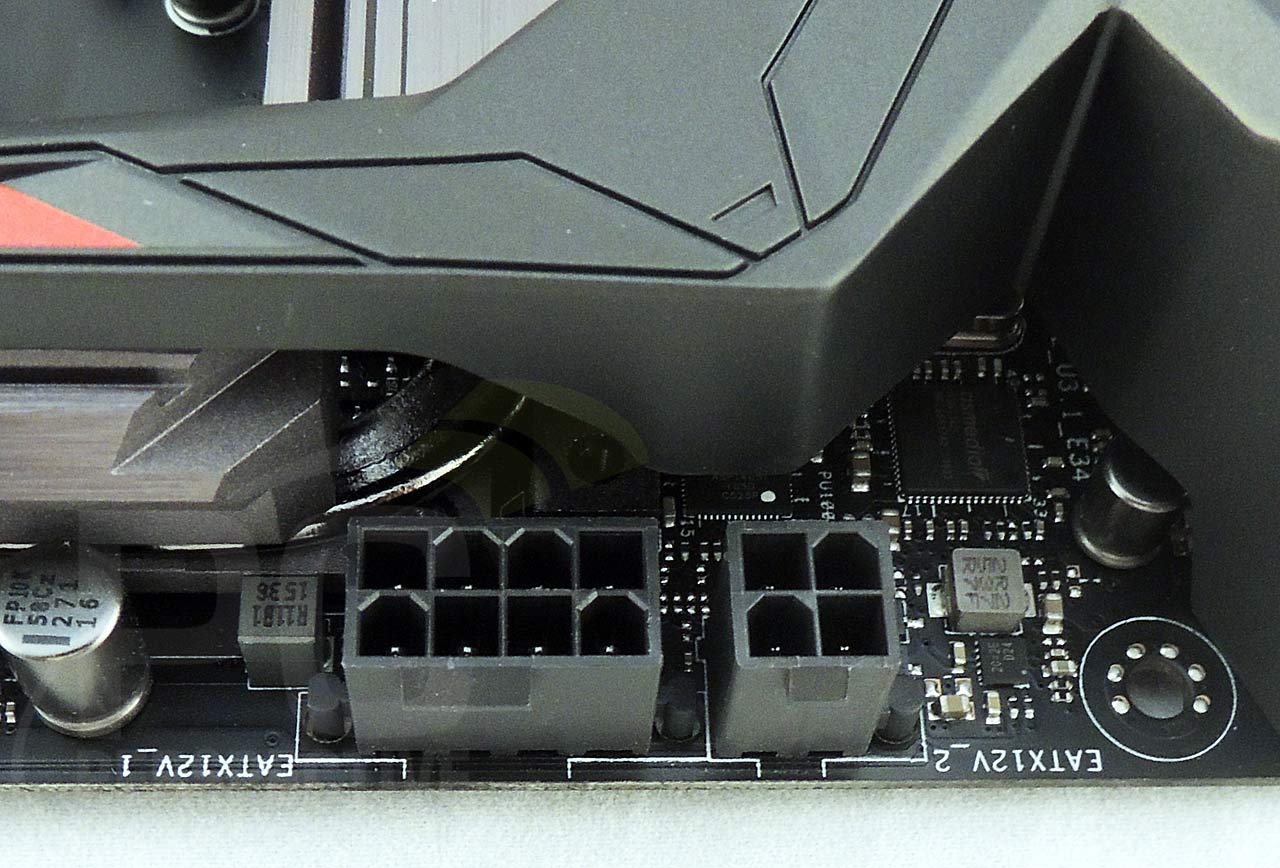 The dual ATX12V power connectors, both an 8-pin and a 4-pin connector, are positioned to the upper right of the CPU socket.