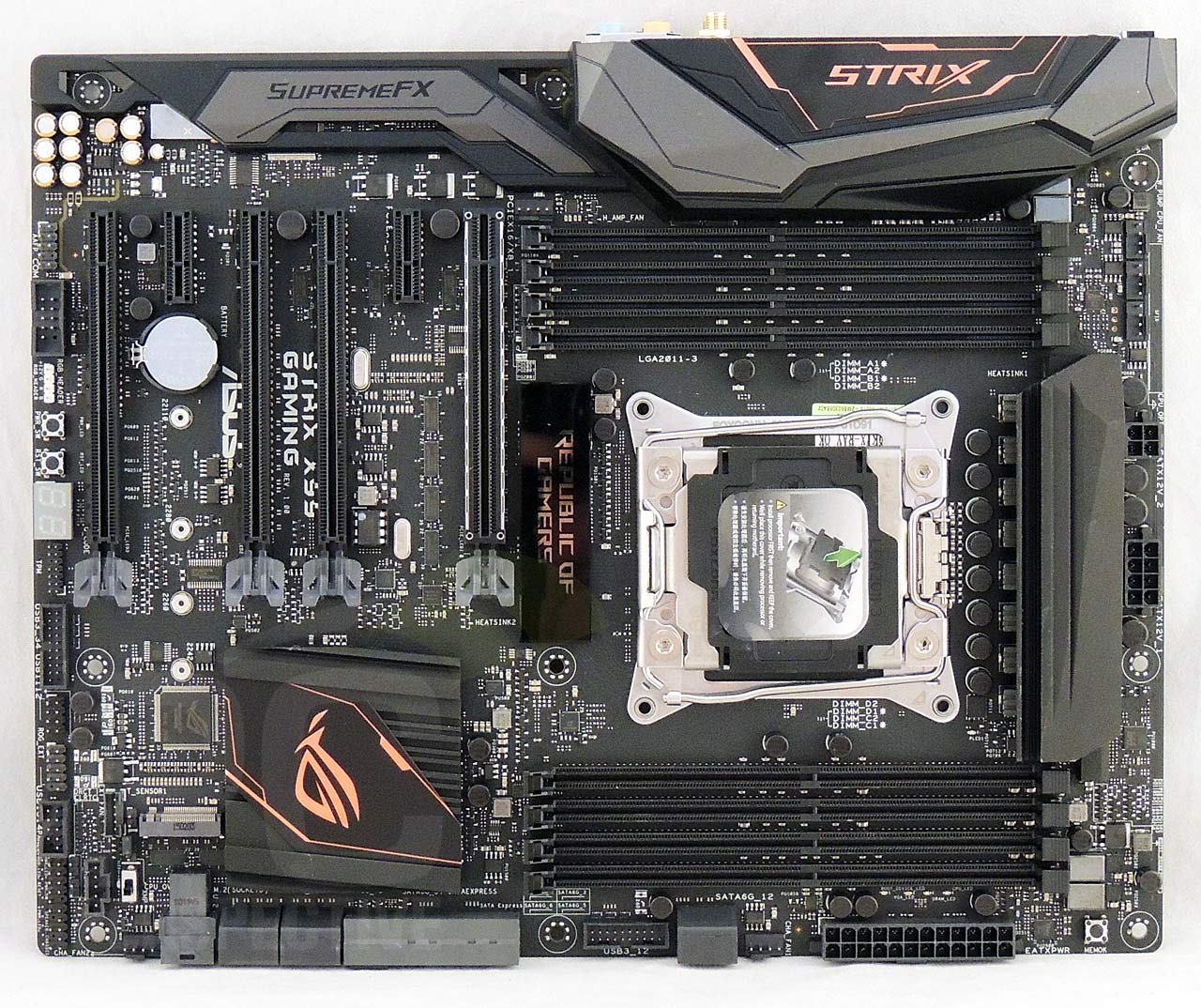 The Strix X99 Gaming motherboard features the latest ROG aesthetics with a black PCB and chrome black heat sinks. The included red accents on the chipset heat sink and rear panel cover can be switched out for other included colored in-lays to better match you desired color scheme. The board components all fit within a standard ATX form factor design. 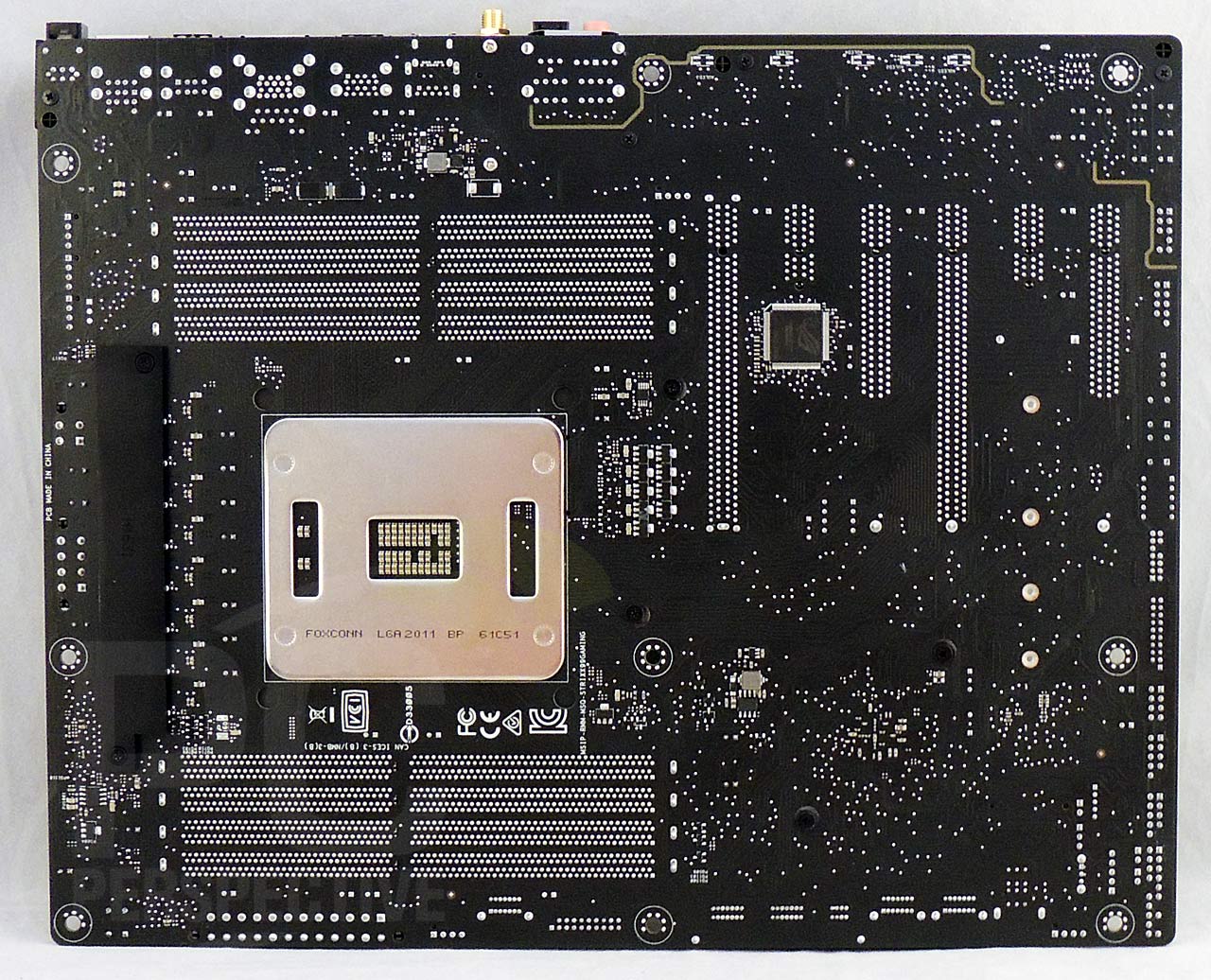 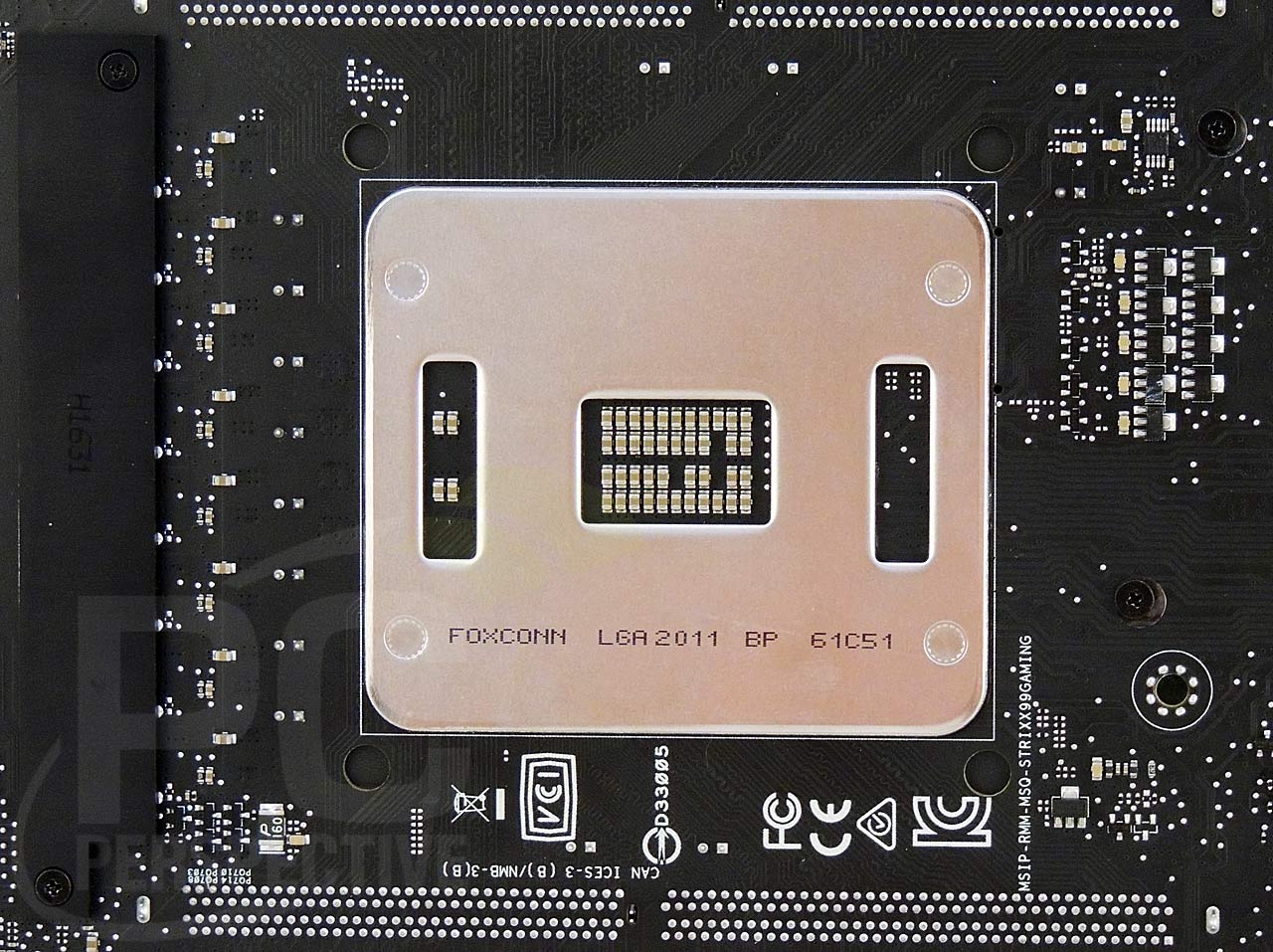 With the exception of chips and components beneath the PCIe and chipset board areas, the back of the board is relatively free of exposed circuitry. The backside of the CPU VRMs are covered by an aluminum plate, providing a secondary heat dissipation path for the components on the top of the board. The area directly behind the CPU socket is clear of components except for to the upper right of the CPU socket area, mostly alleviating the risk to the board when using large custom backplates.

The USB BIOS Flashback button can be used to re-flash the BIOS without having to boot the system into the UEFI BIOS interface or a command-line mode interface. Simply plug in a USB drive containing the proper BIOS file in the root of the drive into the lower USB 3.0 port (blue colored) located to the left of the red USB 3.1 Type-A port and power on the system. As the BIOS is updated, the LED flashing frequency increases. Once the LED goes out, the flash operation is completed and the board can be booted. Note that if the BIOS Flashback LED flashes for 5 seconds and then glows solid, it means that something went wrong with the flashback operation. Check the USB drive for the the BIOS file in the root and make sure that the BIOS file is named correctly. BIOS Flashback looks for a specific filename and file format when attempting to replace the on-board BIOS. According to the user manual, the BIOS file in the root of the flash drive must be named STXX99.CAP for the BIOS Flashback applet to successfully re-flash the board's BIOS. 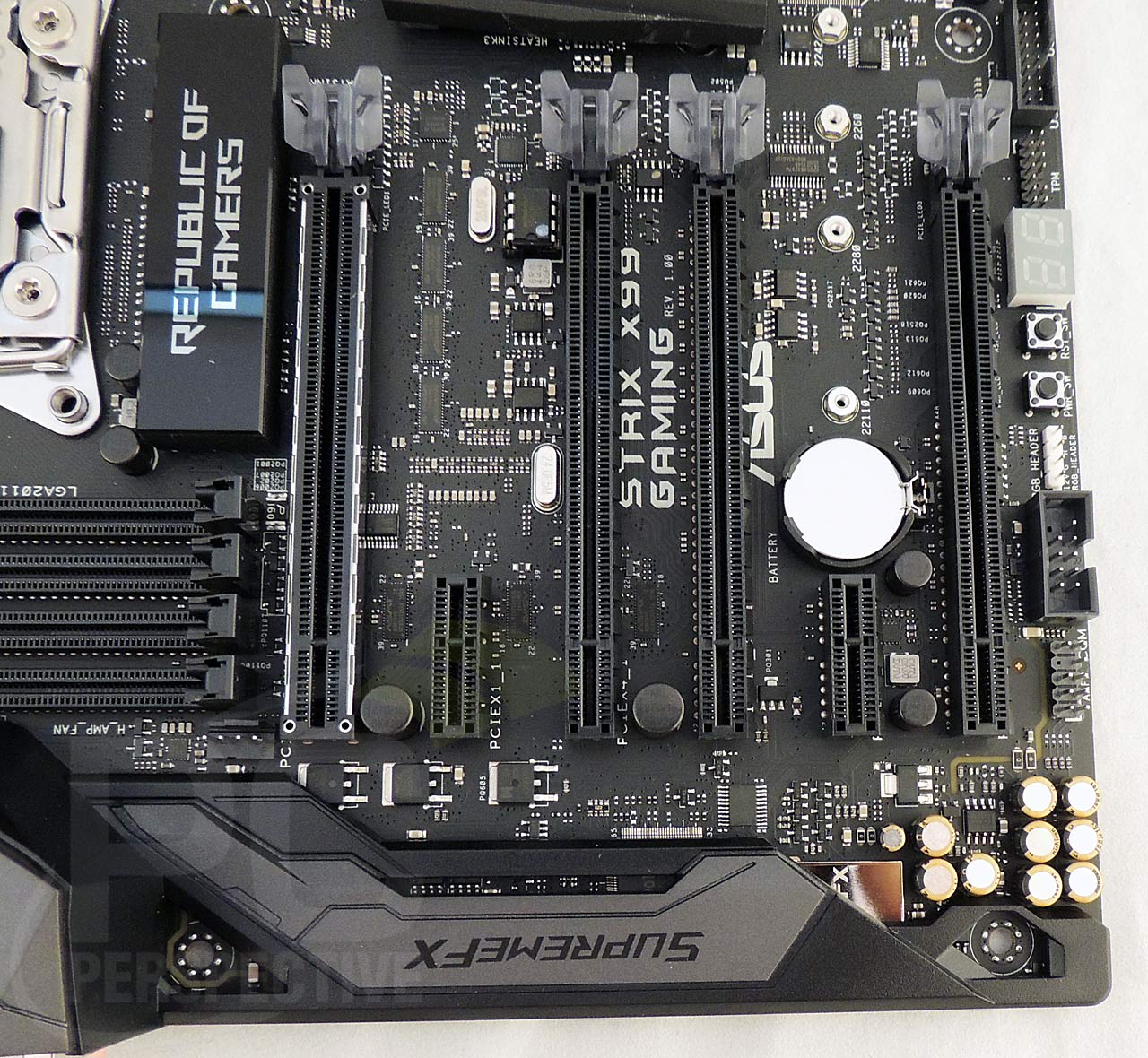 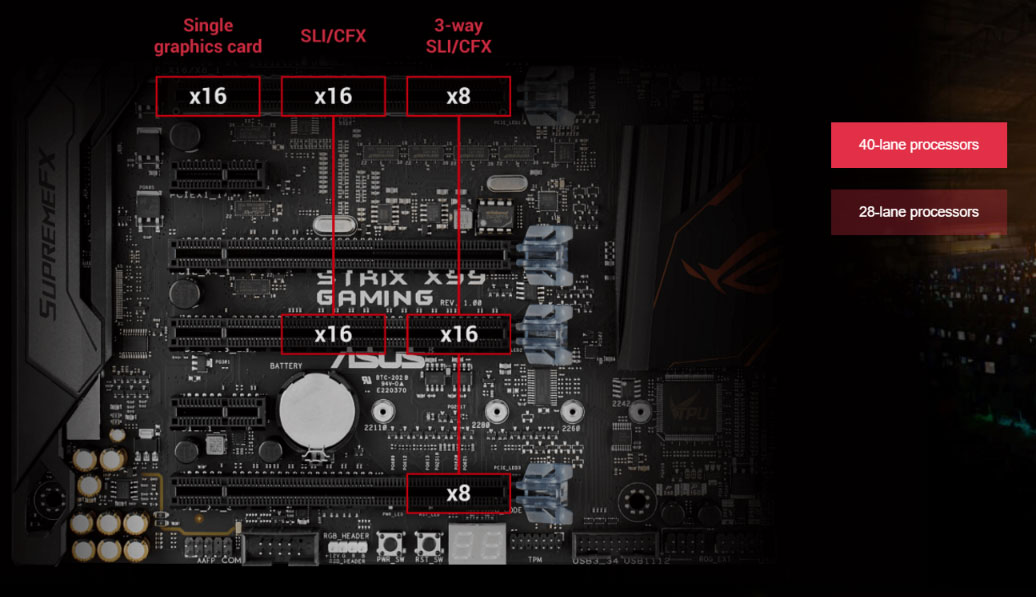 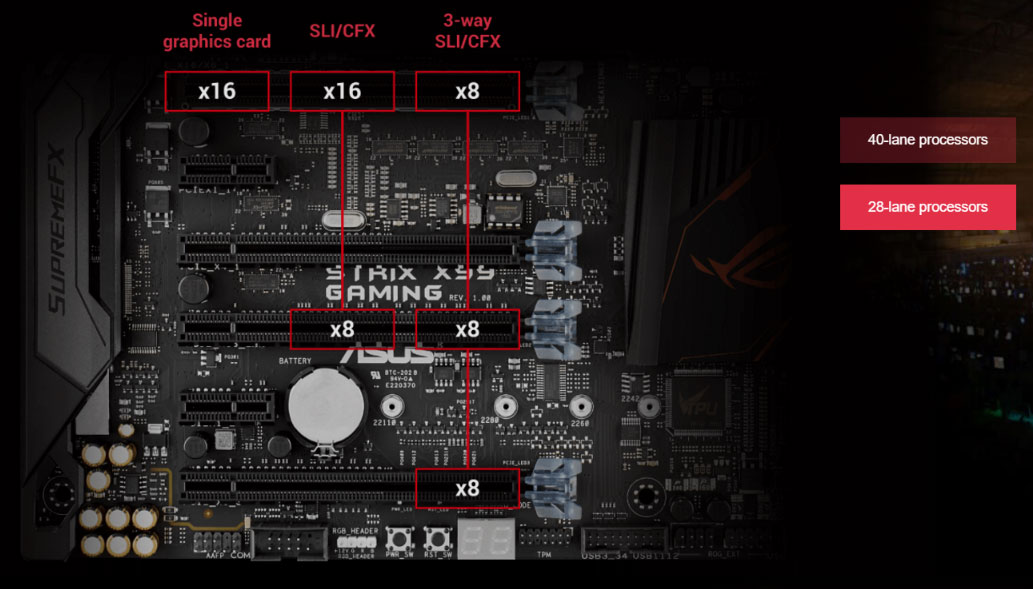 The board's integrated audio components are covered by a plastic overlay just above the PCIe ports with the SupremeFX logo stamped into its surface in black and grey coloring. The audio subsystem lives on an isolated PCB to minimize line-noise and distortion caused by other integrated components. The PCB separator line illuminates according to the color scheme configured through the UEFI or the AURA applet in Windows. ASUS included the following audio components into the sound systems design: an dual audio op-amps cable of 32-300ohm operation, Nichicon audio capacitors, and Sonic SenseAmp for automatic headphone impedance detection. The audio output header is located to the lower right of the overlay along the board's edge.

In the upper left corner of the board (and along the outer edge of the PCIe x16 slot 4) are the front panel audio header, a serial port header, a 12V RGB LED header, and the power and reset buttons. The RGB LED header can be used to power and synchronize a connect LED strip with the board-integrated LEDs. 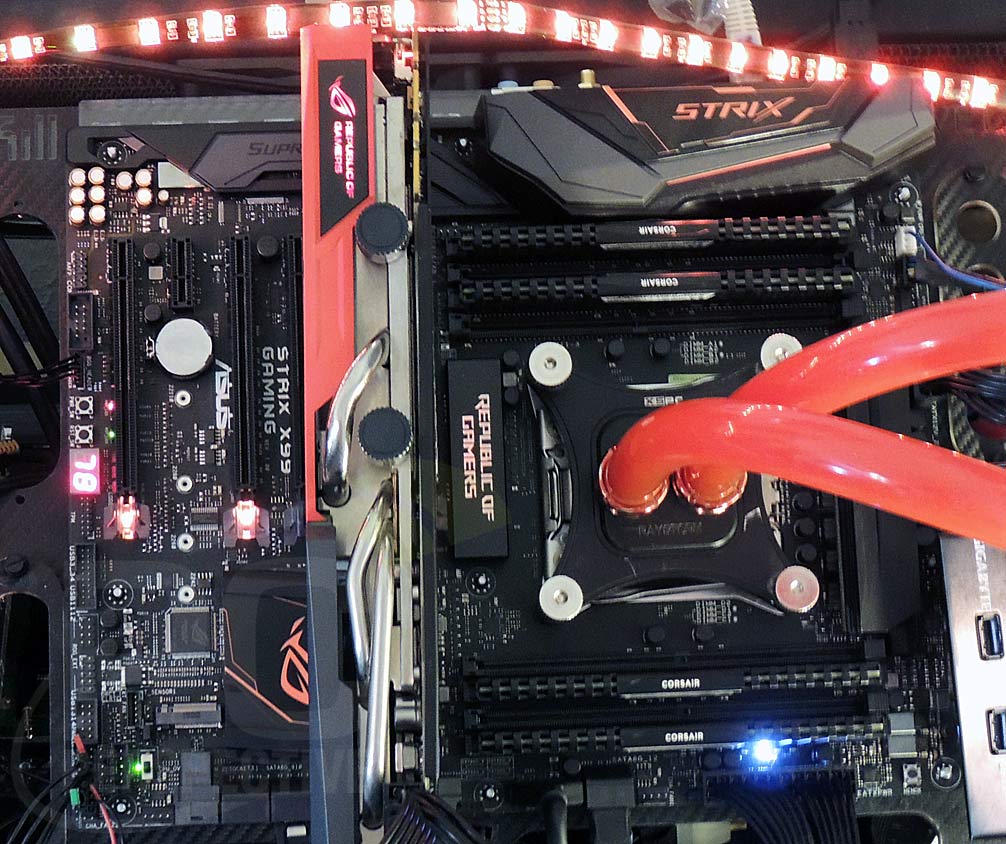 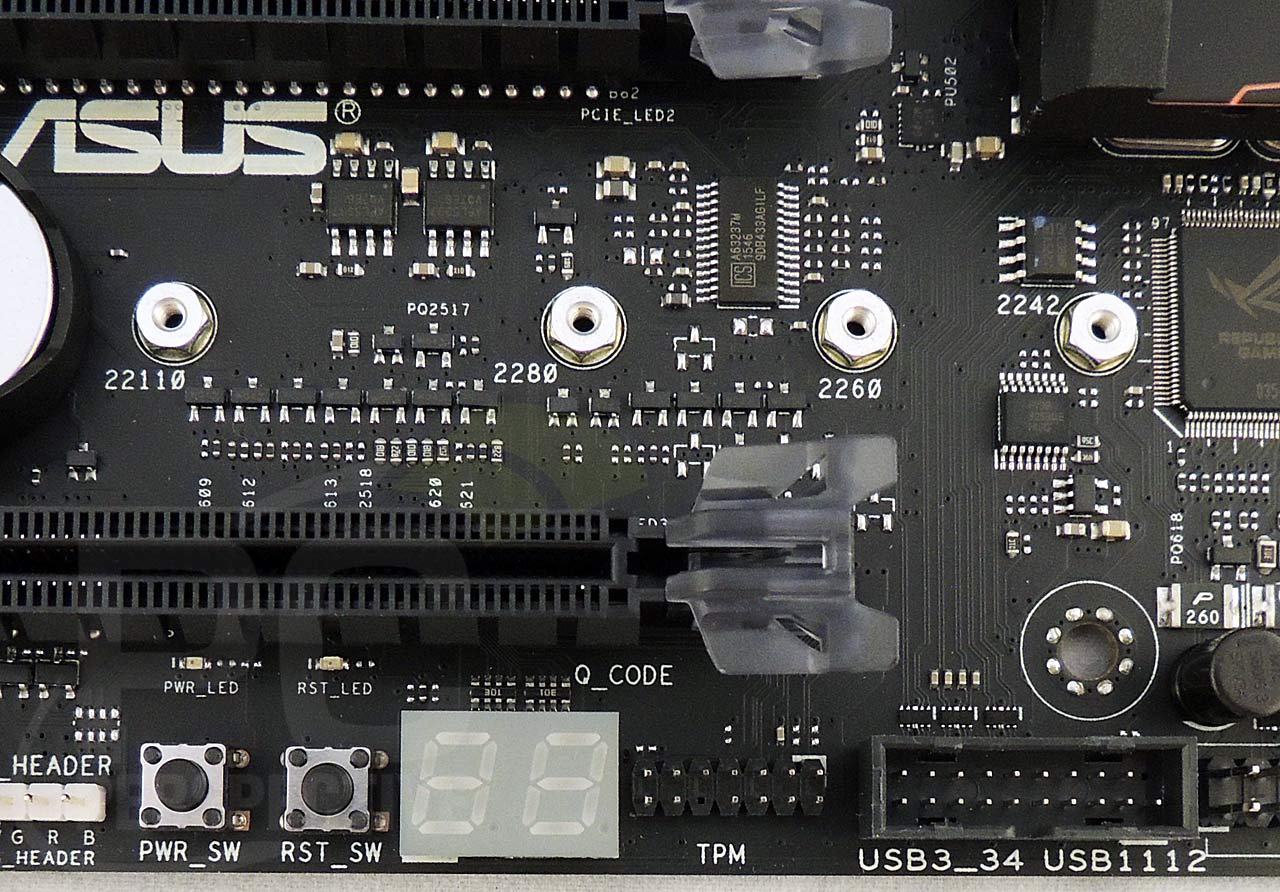 The power and reset button, 2-digit diagnostic LED display, trusted module port header, and USB 3.0 header are located to the lower left of the PCIe x16 slot 4. The 2-digit diagnostic display can be used for debugging system issues during system initialization. The displayed debug codes can be decoded using the table from the motherboard manual. 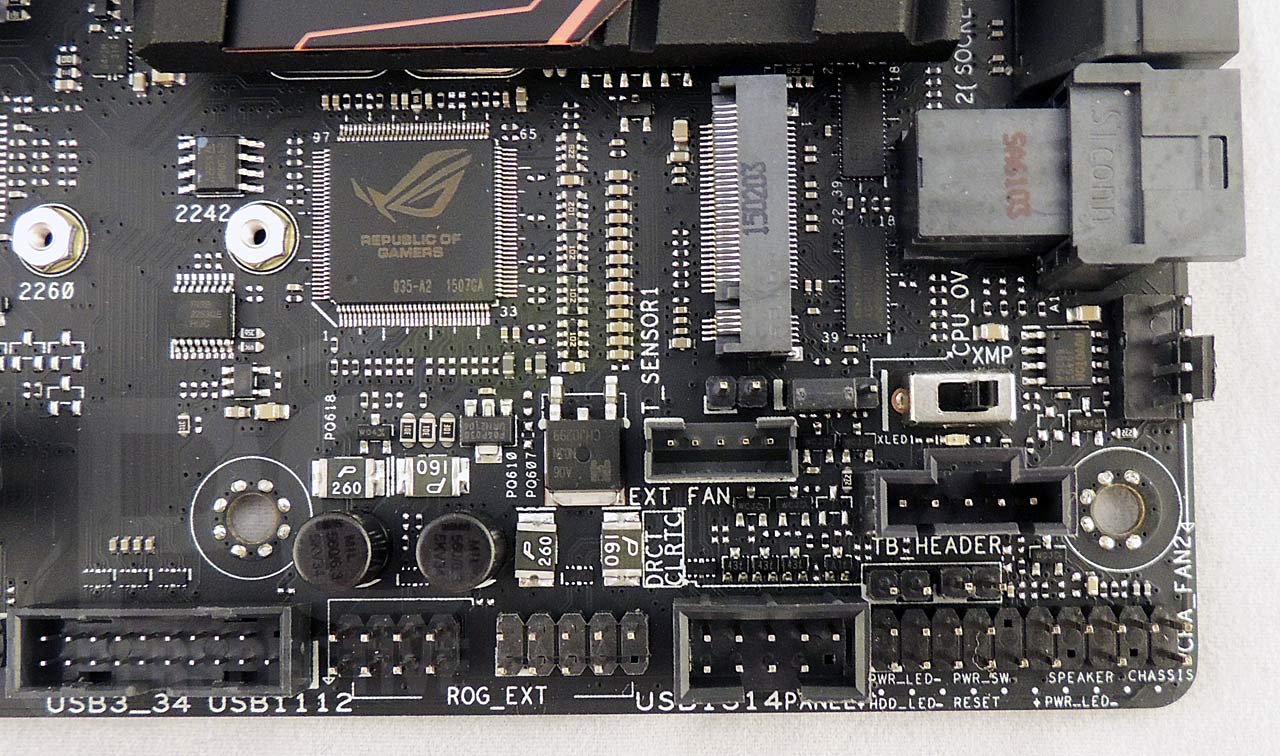 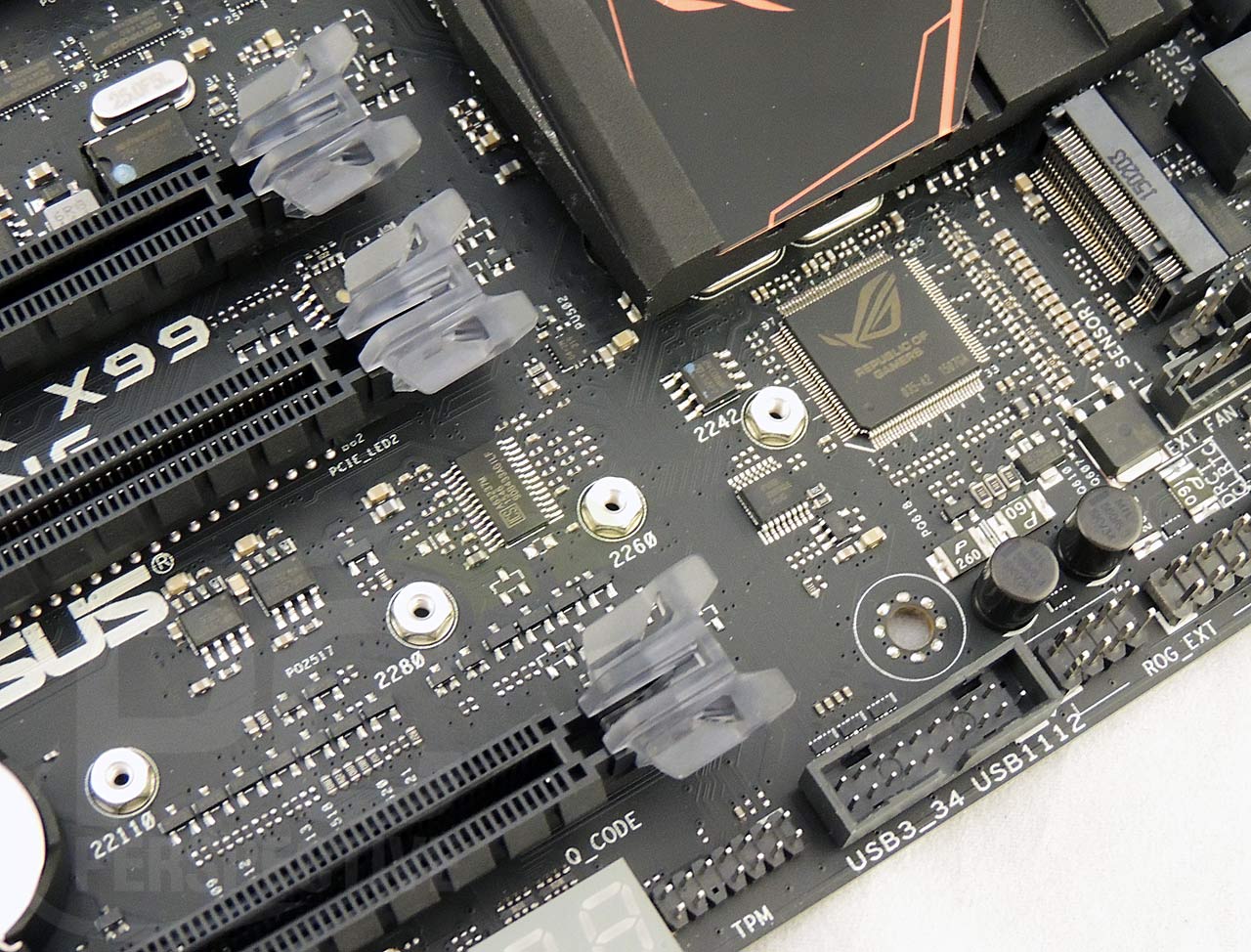 A USB 3.0 header, ROG OC Panel (ROG_EXT) header, external fan device header, temperature sensor header, CPU Overvolt jumper, XMP memory switch, Thunderbolt device header, chassis intrusion header, BIOS clear header, chassis fan header, front panel header, and PCIe x4 M.2 slot are located in the lower left corner of the board. The M.2 port supports M-Key style M.2 SSDs with PCIe or SATA interfaces and length of up to 110mm. The lower header in the ROG_EXT group can be used for two additional USB 2.0 ports if the OC Panel II device is not connected to the system. The OC Panel cable (bundled in with the ROG OC Panel device) connects to the ROG_EXT ports, allowing the ROG OC Panel II device to interact with the board. The external fan device header can be used to add additional fan and temperature ports by connecting the external fan board to the header using the included cable. The EZ XMP switch forces the system memory modules to operate per their factory configured XMP settings. This functionality is enabled with the switch pushed to the right. The CPU Overvolt jumper enabled a higher voltage ceiling for the CPU Voltage (configurable via the UEFI) when enabled. 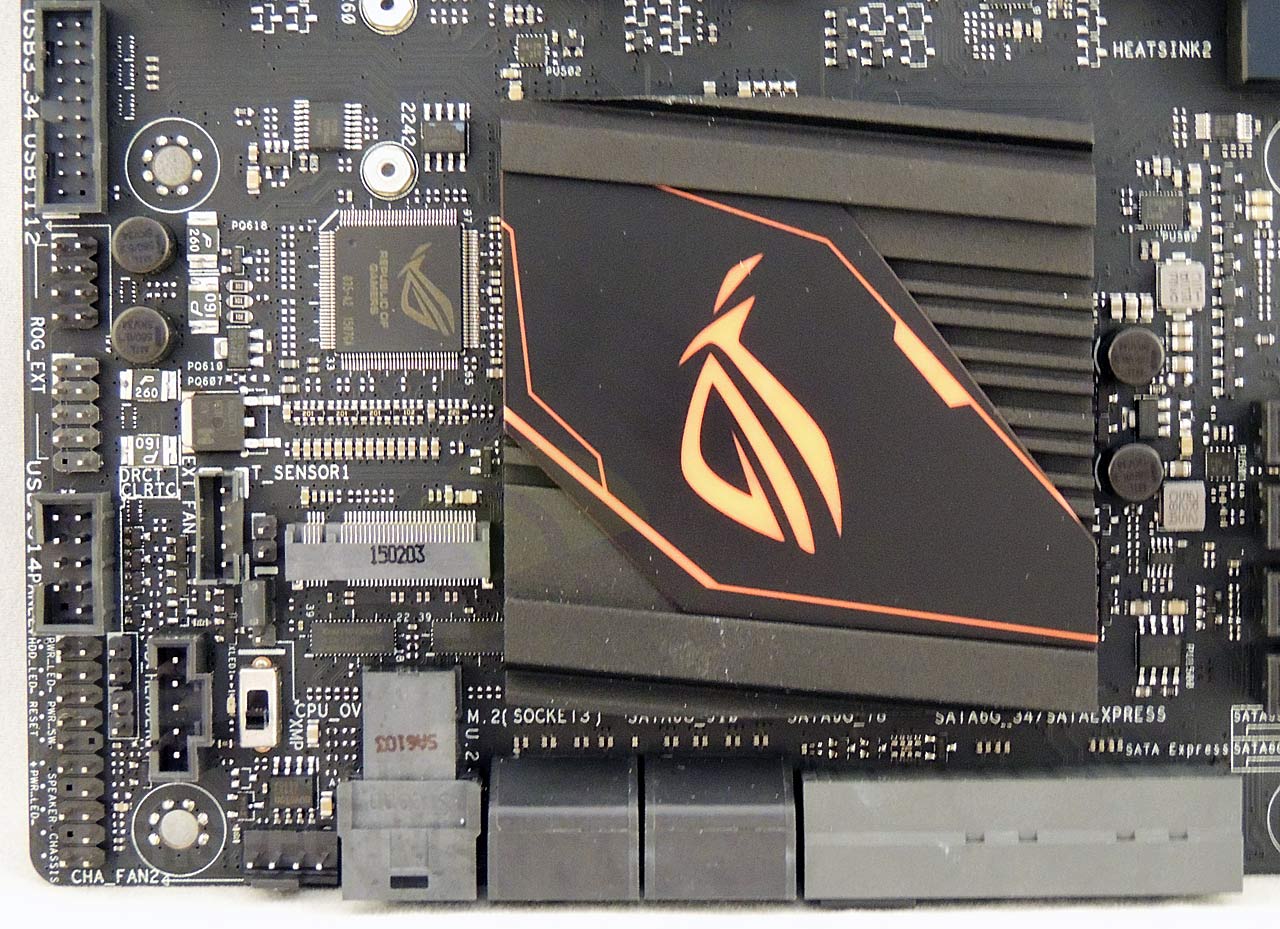 The Intel X99 chipset is cooled by a low-profile black heat sink with an ROG logo in its center. The ROG logo in-lay can be switched out with other colored in-lays (included) to better mesh with your desired lighting aesthetic. 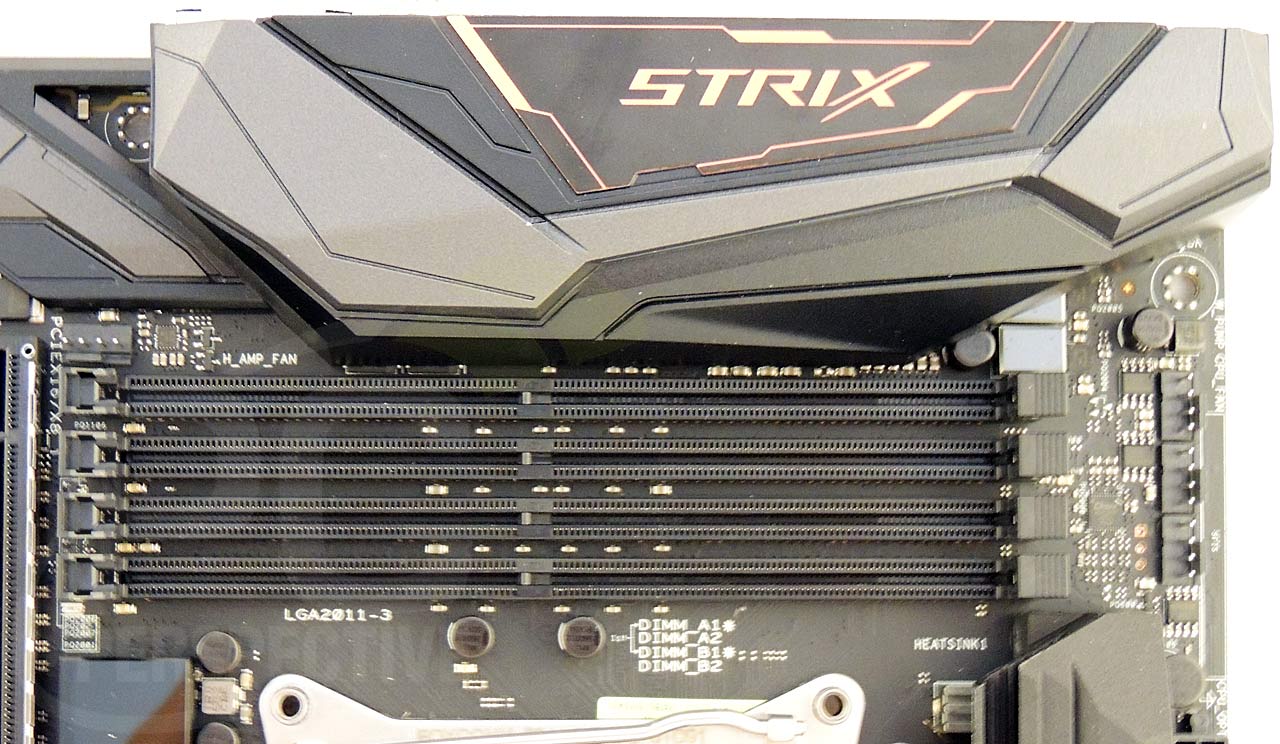 The eight on board DDR4 memory slots are located directly above and below the CPU socket with support for up to 128GB of memory across all slots. Quad Channel memory mode is enabled with memory modules seated in slots 1 and 3 or slots 2 and 4 in both the upper and lower memory slot sets. The primary memory slots are slots 2 and 4 in the top and bottom slot sets. Note that memory speeds above 2133MHz are considered overclocked speeds and are outside of the official Intel stock memory speed specifications. Directly below the lower set of memory slots are a USB 3.0 header, the primary and secondary SATA 6Gbps port block, a chassis fan header, the 24-pin ATX power connector, and the MemOK! button. The MemOK! button can be used to reset memory-related BIOS settings to defaults, useful when the system doesn't boot because of memory options set over-aggressively. 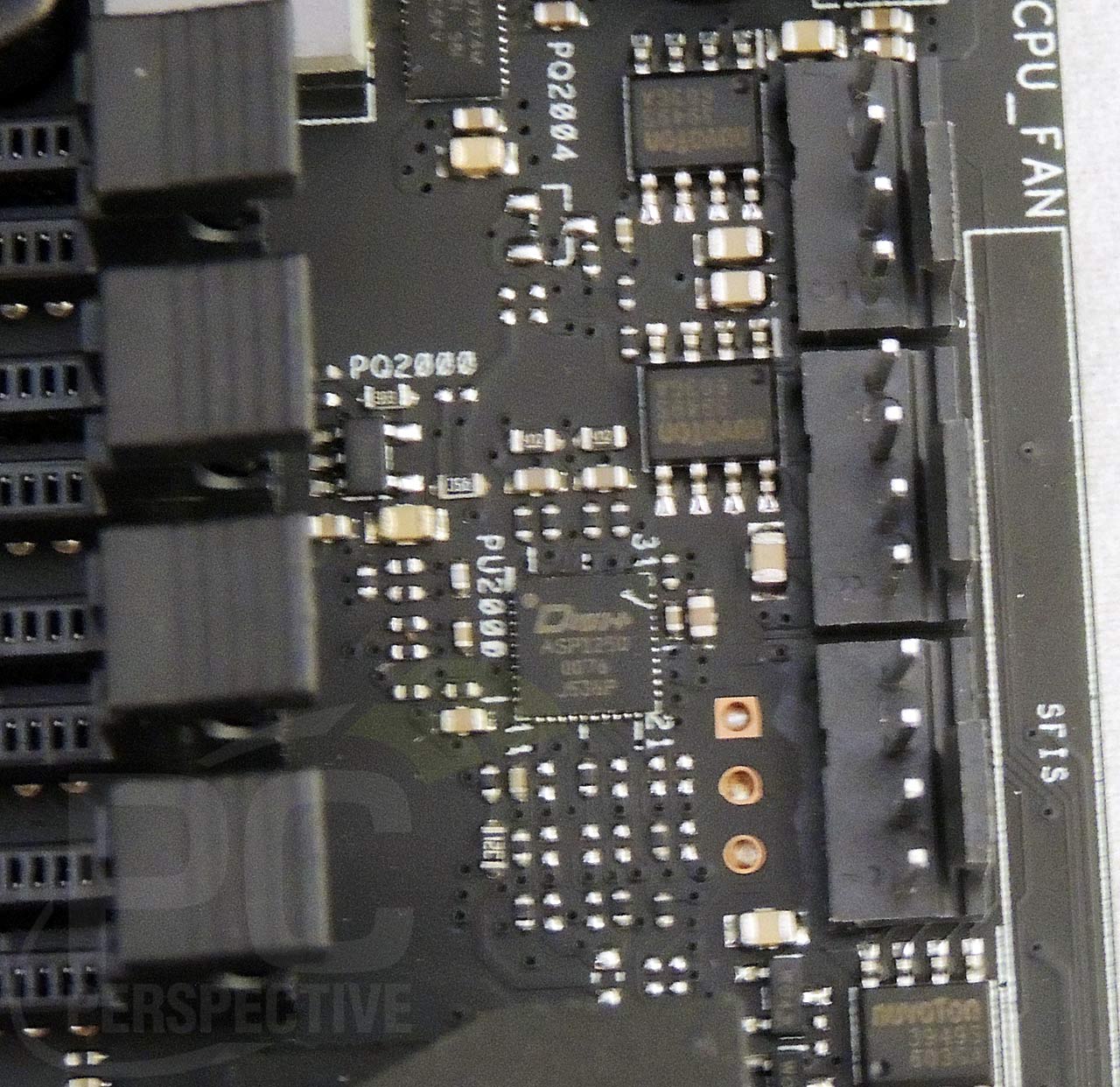 To the right of the upper set of DIMM slots are CPU primary (CPU_FAN), CPU secondary (CPU_OPT), and water pump (W_PUMP) 4-pin fan / power headers. The 4-pin water pump header can be used to power a standard 12V water pump – an AIO cooler's integrated coolant pump or a pump integrated into a DIY loop. 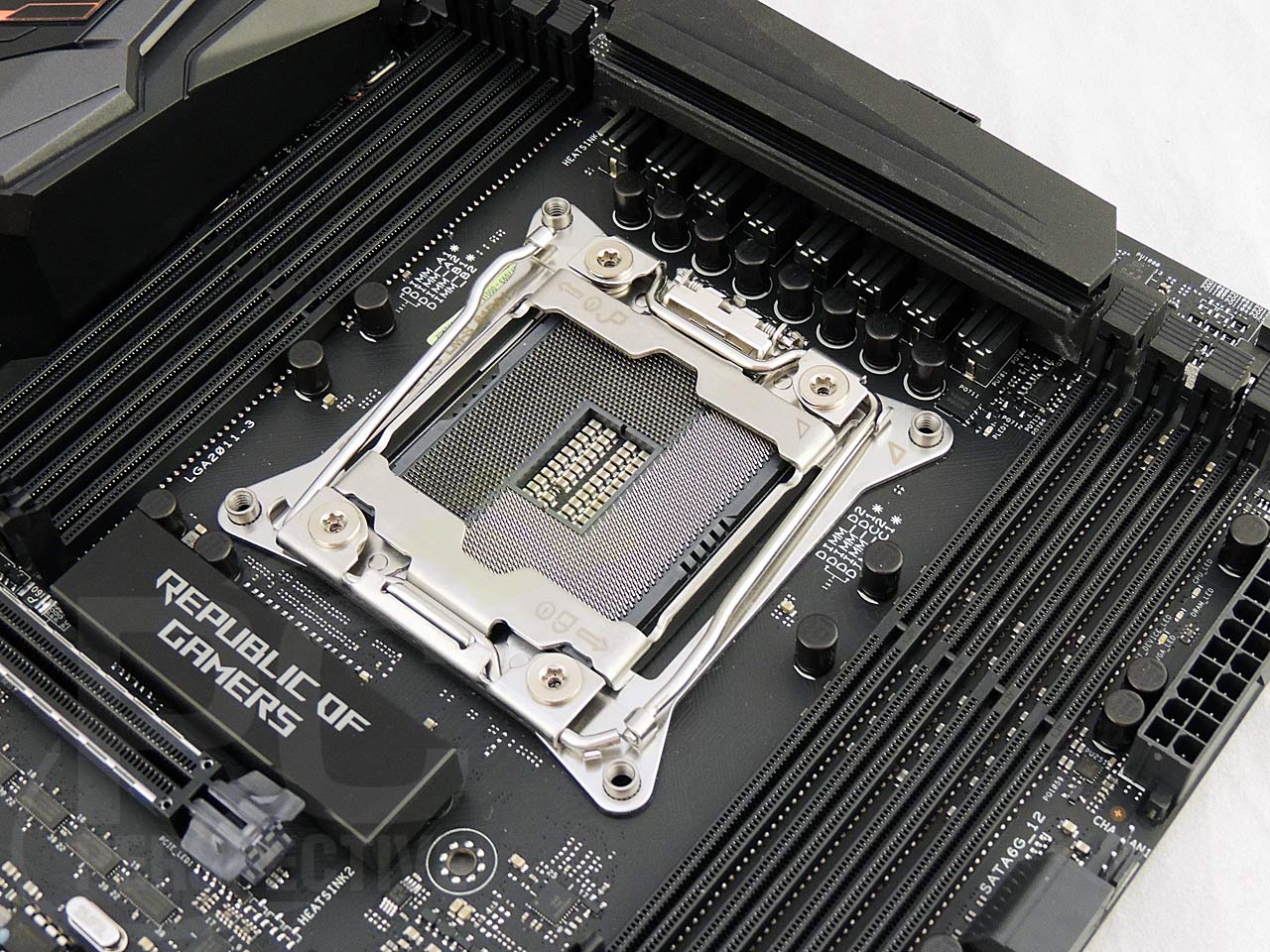 The CPU socket area is mostly clear of obstructions allowing use of most coolers without issue.The board was designed with a total of eight digital power phases for CPU power delivery requirements, which should provide more than sufficient power under any situation. The VRMs are cooled by a large passive aluminum heat sinks to the right of the CPU socket. Notice that the VRM's chokes have integrated metal covers with ridges to aid in passive cooling. The ROG LED block to the left of the CPU socket illuminates according to the color scheme configured through the UEFI or the AURA applet in Windows. 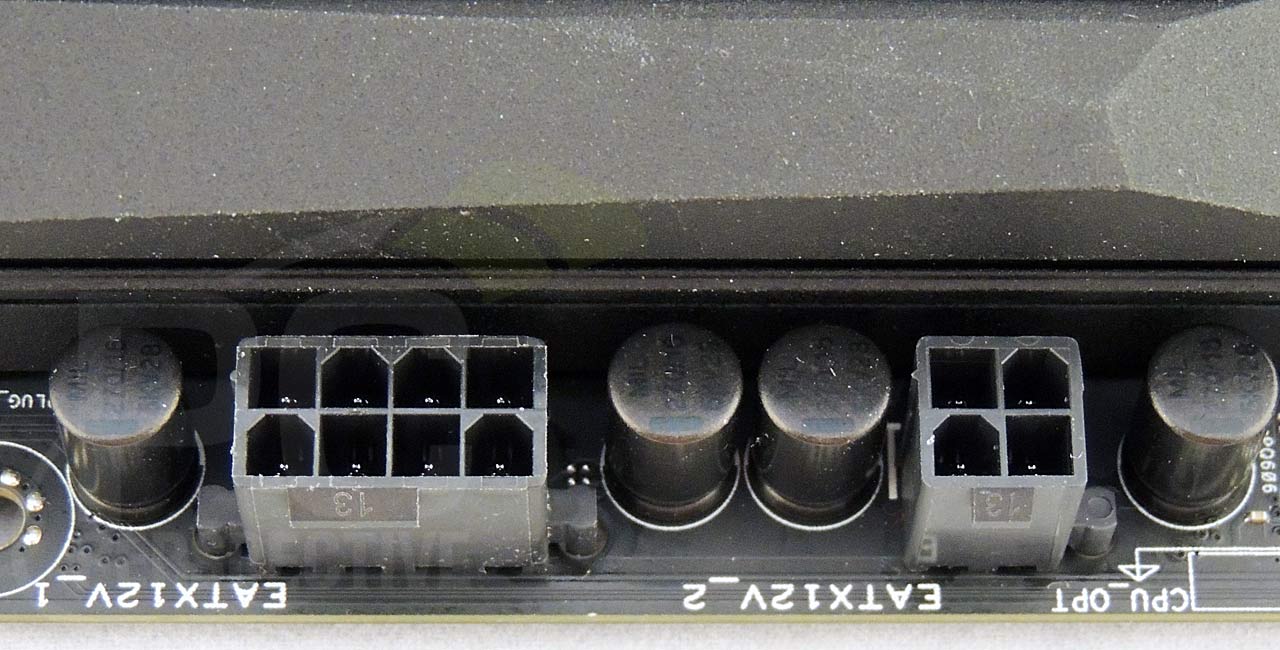 ASUS provides both 8-pin and 4-pin ATX12V power connectors along the outer edge of the VRM heat sink, located to the right of the CPU socket. 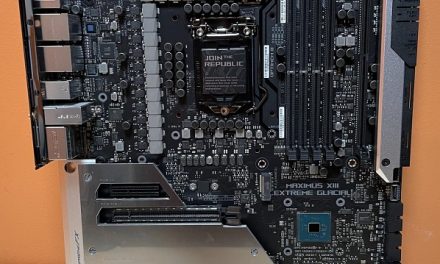