First up is the Nytro XM1440. This is a 2TB M.2 22110 SSD complete with enterprise firmware and power loss protection. Nice little package, but what's it for? 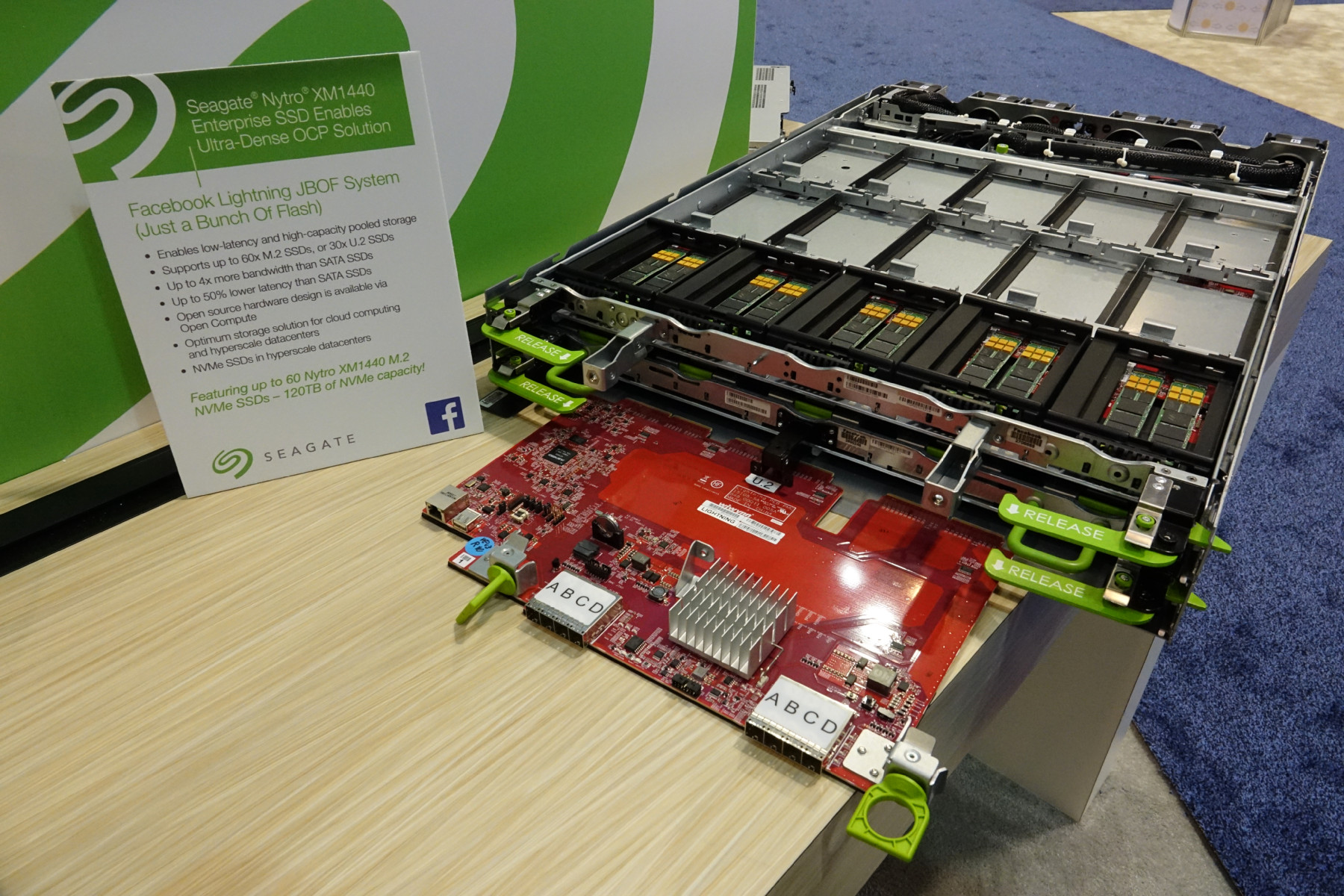 ..well if you have 60 of them, you can put them into this impressive 1U chassis. This is Facebook's Lightning chassis (discussed yesterday). With Seagate's 2TB parts, this makes for 120TB of flash in a 1U footprint. Great for hyperscale datacenters.

Now onto what you came to see: 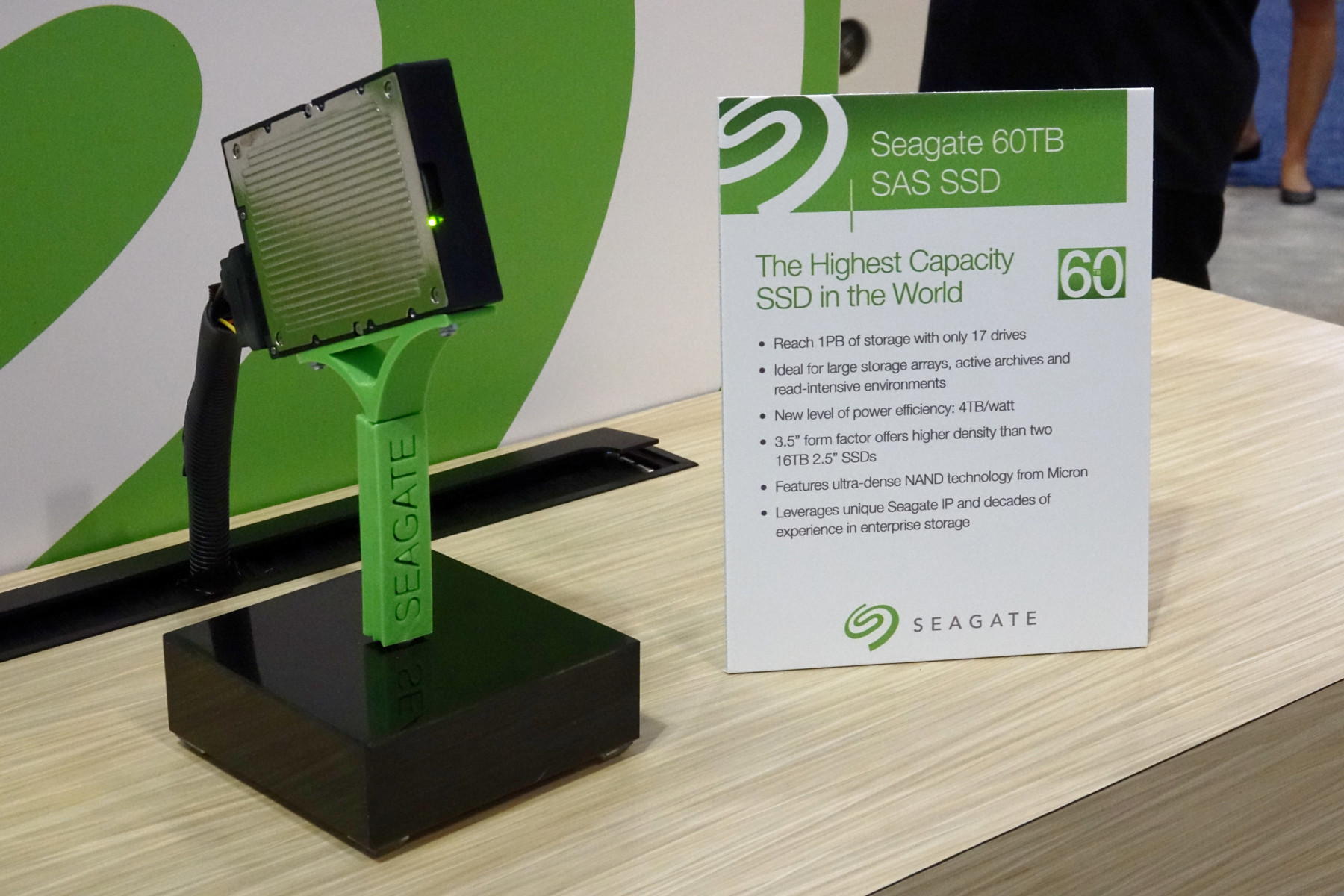 This is the 'Seagate 60TB SAS SSD'. It really doesn't need a unique name because that capacity takes care of that for us! This is a 3.5" form factor SAS 12Gbit beast of a drive. 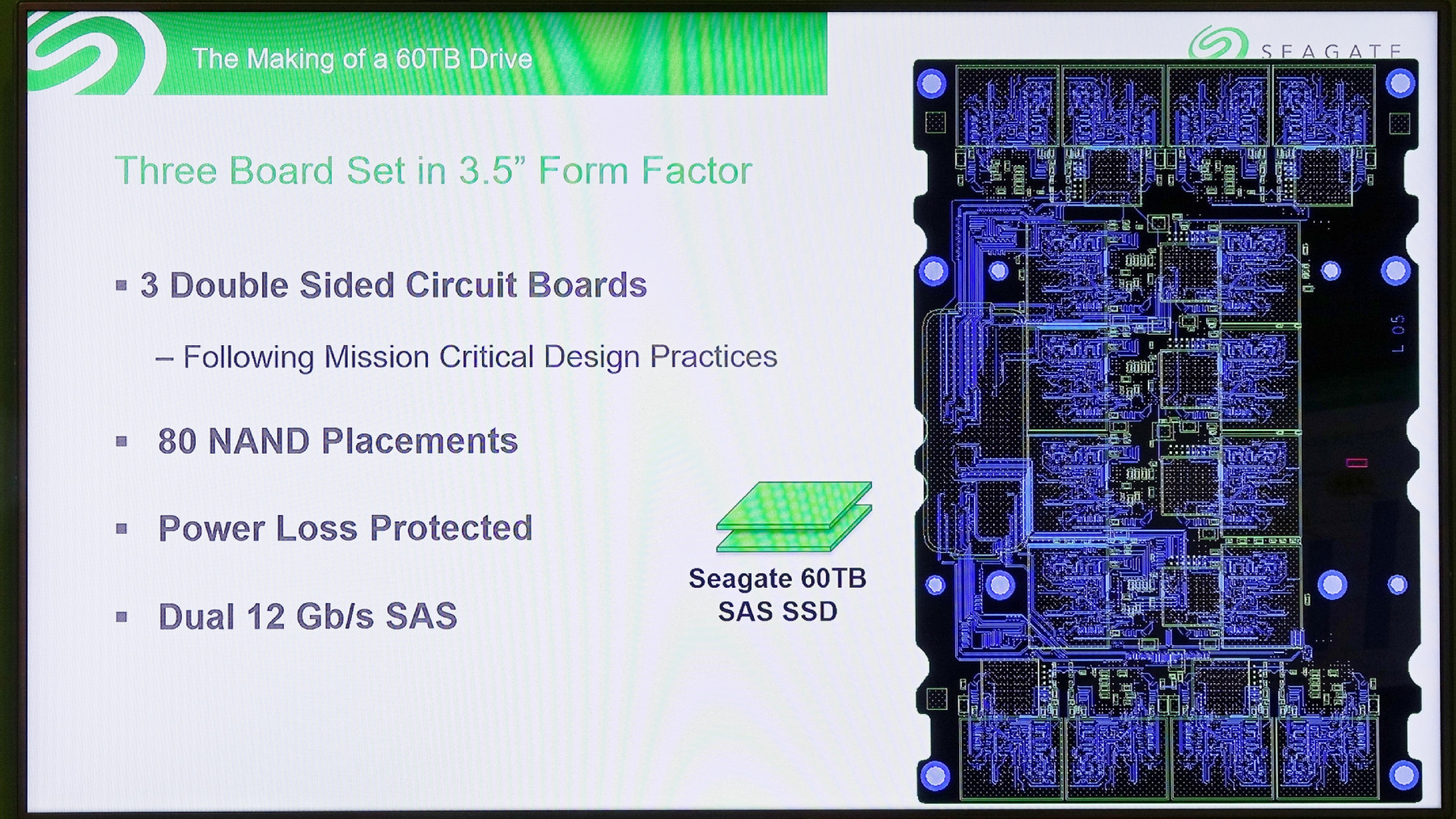 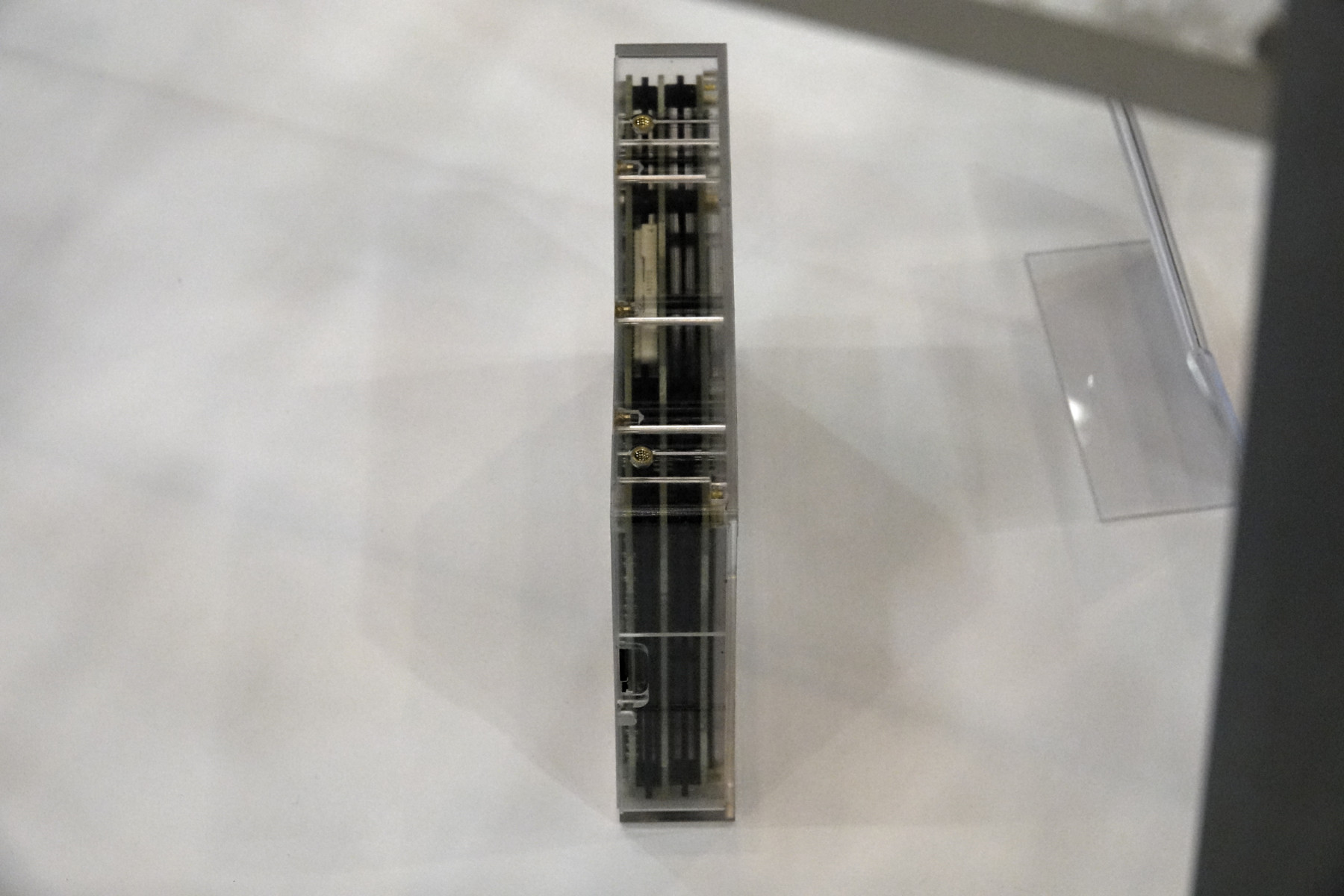 They pulled this density off with a few tricks which I'll walk through. First was the stacking of three PCBs with flash packages on both sides. 80 packages in total. 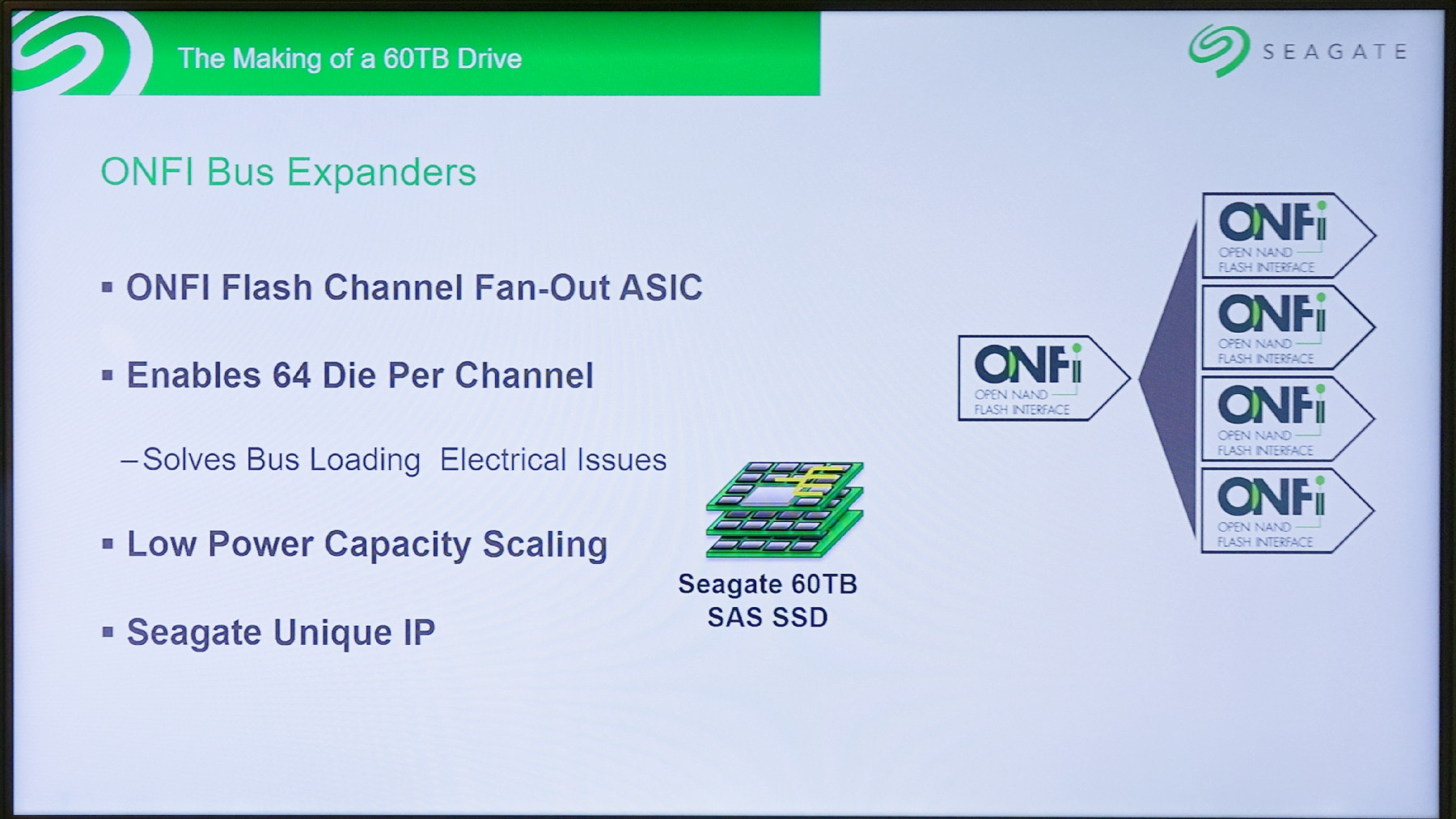 Next up is Seagate's ONFi fan-out ASIC. This is required because you can only have so many devices connected to a single channel / bus of a given SSD controller. The ASIC acts as a switch for data between the controller and flash dies. 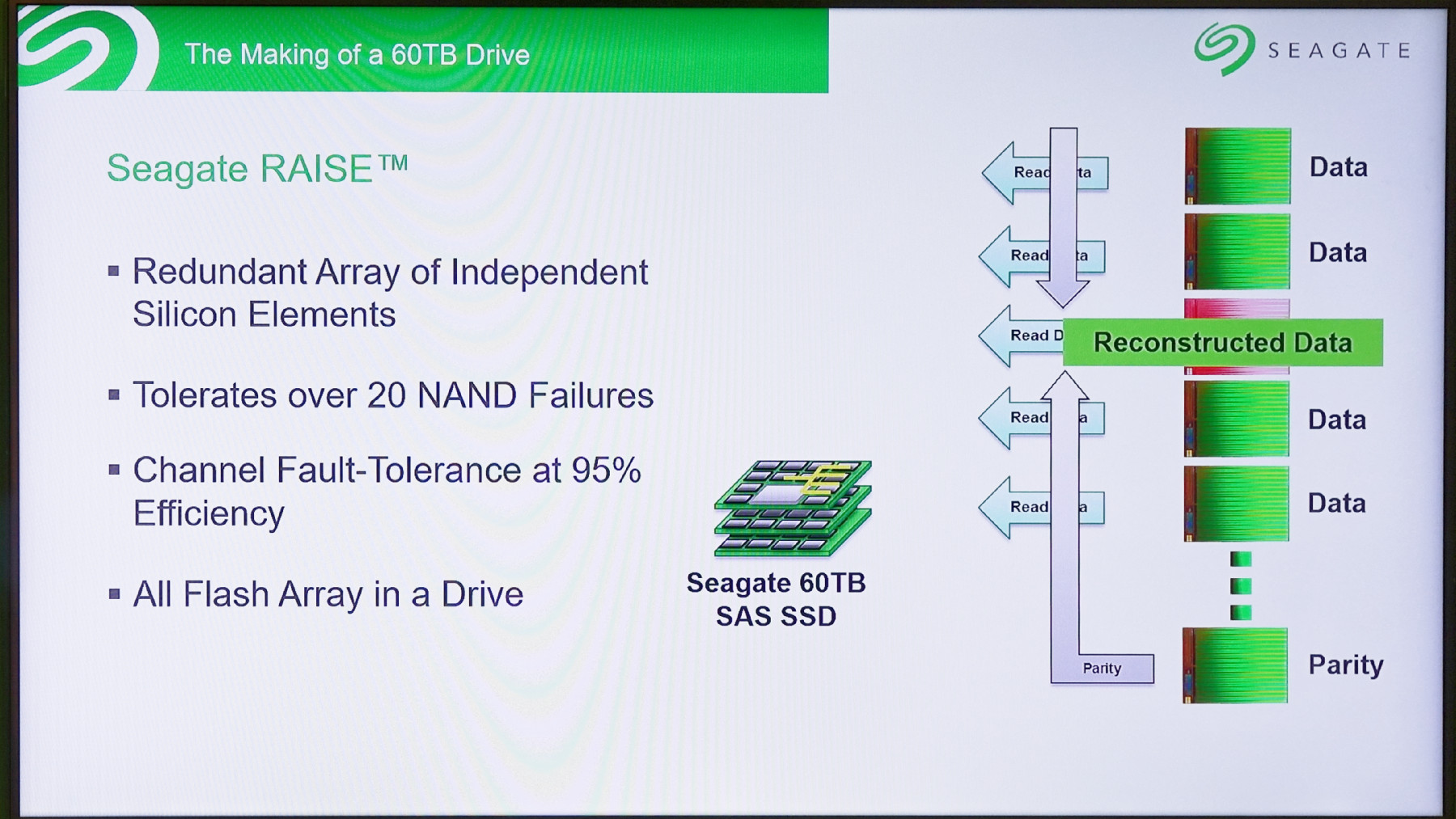 With so much flash present, we could use a bit of fault tolerance. You may recall RAISE from SandForce (who Seagate now owns). This is effectively RAID for flash dies, enabling greater resistance to individual errors across the array. 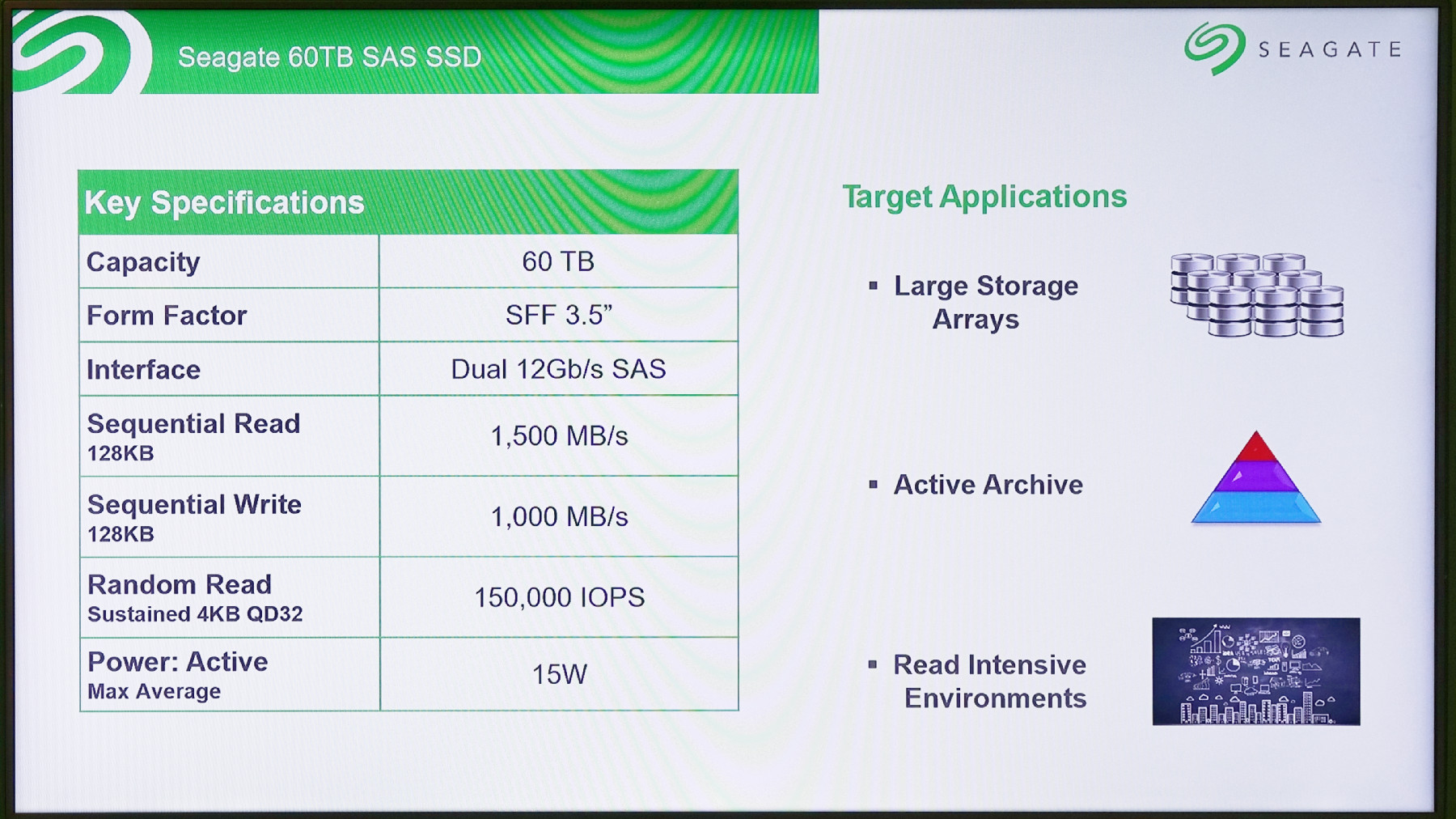 Finally we have the specs. With a dual 12 Gbit SAS inteface, the 60TB SAS SSD can handle 1.5 GB/s reads, 1.0 GB/s writes, and offers 150,000 IOPS at 4KB QD32 random (SAS tops out at QD32). The idea behind drives like these is to cram as much storage into the smallest space possible, and this is certainly a step in the right direction. 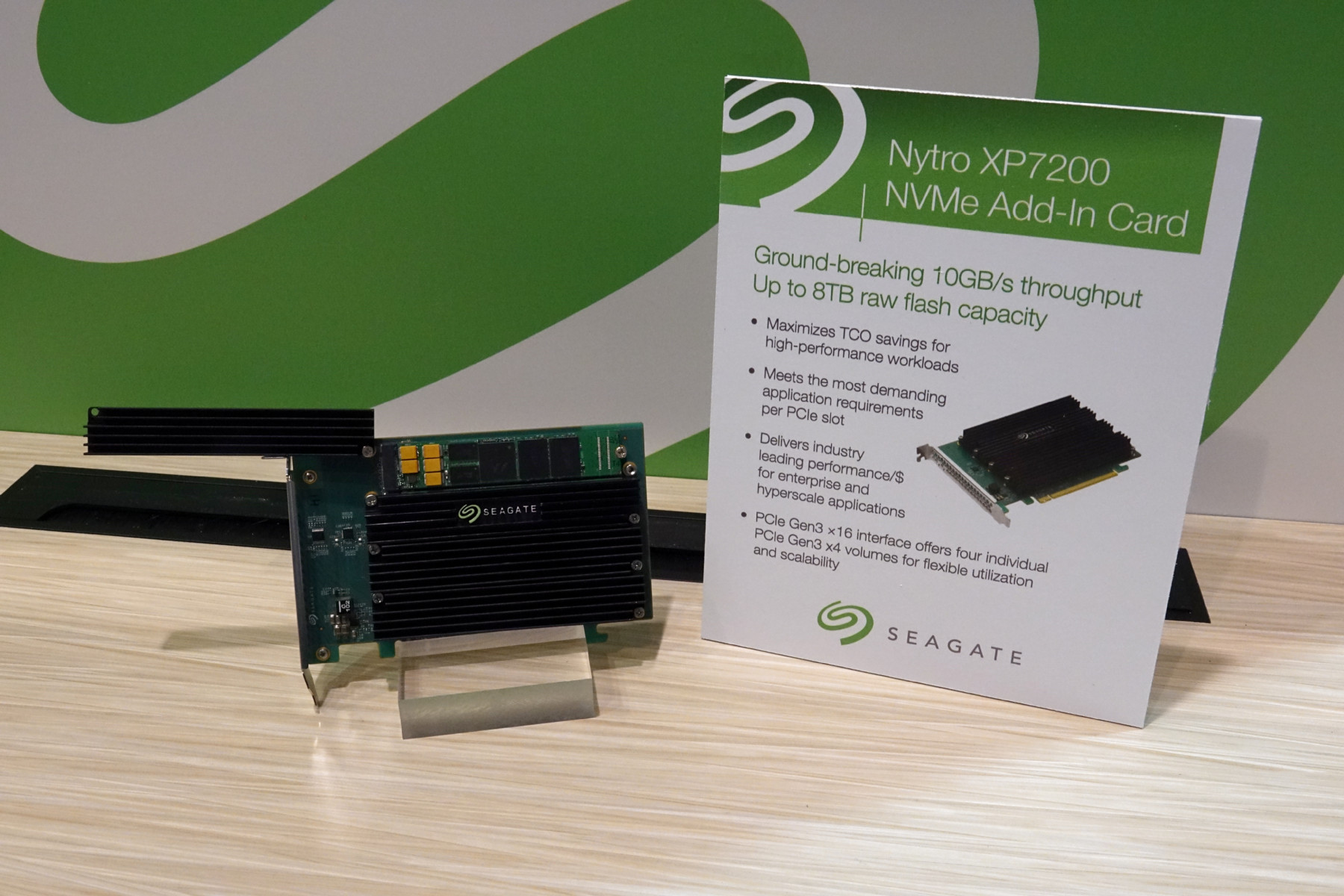 We also saw the XP7200 add-in card. I found this one interesting as it is a PCIe 3.0 x16 card with four M.2 PCIe 3.0 x4 SSDs installed, but *without* a PLX switch to link them to the host system. This is possible only in server systems supporting PCIe Bifurcation, where the host can recognize that certain sets of lanes are linked to individual components.

More to follow from FMS 2016! Press blast after the break.

The 60TB SAS SSD and 8TB Nytro XP7200 NVMe SSD are the newest additions to Seagate’s data center portfolio and are designed to help enterprise IT leaders obtain more value from the rapidly expanding amount of data they must contend with, even under the most demanding application requirements. The 60TB SAS SSD features twice the density and four times the capacity of the next highest-capacity SSD available today — equivalent to the capacity needed to accommodate 400 million photos on a typical social media platform, or 12,000 DVD movies. This single controller architecture also delivers the lowest cost per gigabyte for flash available today.

The 60TB SAS SSD also simplifies the configuration process of accommodating “hot” and “cold” data, enabling data centers to use the same enterprise HDD 3.5 inch storage form factor. This eliminates the added step of separating out different types of data for near-term availability versus long-term storage — largely based on estimations or best-guesses of future data usage. Instead, data centers can rely on an SSD that helps address their need to quickly accommodate and ensure accessibility of ever-increasing large amounts of data without having to add additional servers or incorporate additional management steps. And, because of the drive’s flexible architecture, it also provides a pathway for data centers to easily grow from the current 60TB capacity to accommodate 100TB of data or more in the future — and all in the same form factor.

Similarly, the 8TB Nytro XP7200 NVMe SSD can accommodate the hyperscale needs of today’s data centers seeking to easily grow with their data without losing the ability to quickly access and process it — a scenario commonly seen in applications involving high performance computing, scale-out databases and big data analytics, such as scientific research and weather modeling. It features a single PCIe interface for high-speed data transfers and four separate controllers, providing processing power up to four times faster than comparable drives, but without the higher cost, power levels and latency required from a PCIe switch or bridge. Applications can process more transactions faster using the industry’s highest bandwidth through one PCIe slot, and without having to invest in more hardware. Additionally, the technology easily integrates into all-flash system arrays.

AccelStor’s core focus is on providing all-flash arrays that offer tremendous performance and reliability to meet the demands of the fast-growing cloud and enterprise markets. Critical to achieving this, though, is having the right building blocks — including exacting solid-state engineering and software innovation,” said Dr. Charles Tsai, president of AccelStor, Inc. “AccelStor works with Seagate Technology to seamlessly integrate our state-of-the-art FlexiRemap software technology with Seagate Nytro NVMe SSDs. The result: we’re able to translate SSD performance into complete all-flash arrays that help data centers extract the most value from their data.”

The 8TB Nytro XP7200 NVMe SSD will be available through channel partners in calendar Q4, 2016. Future availability of the 60TB SAS SSD, currently a demonstration technology, is anticipated for some time in 2017.

The explosion of data can translate into more value for enterprises, if they have the right means to accommodate that data,” said Brett Pemble, Seagate’s general manager and vice president of SSD products. “If anything is certain, it’s the fact that across industries, the limits of data growth are boundless. Seagate is committed to staying on top of this growth and, in turn, ever-changing customer needs, and providing new and varied technologies to help customers stay ahead of the data management curve. New products like the 8TB Nytro XP7200 NVMe SSD and 60TB SAS SSD are testament to that.”

“Given the demands on today’s data centers, optimal technologies are those that can accommodate an immense amount of data as needed—and without taking up too much space. As such, we are constantly seeking new ways to provide the highest density possible in our all-flash data center configurations,” said Mike Vildibill, vice president, Advanced Technologies and Big Data, Hewlett Packard Enterprise. “Seagate’s new 60TB SAS SSD offers an exciting possibility for customers to achieve higher server storage performance and capacity configurations never seen before.”

Phil Brace, president of Seagate Cloud Systems and Silicon Group, will present the FMS keynote address, “Design Efficient Storage Systems with Both Flash and HDDs,” on Wednesday, Aug. 10, at 2:40 p.m. Pacific. The presentation will address the role of flash memory and hard drives in meeting the data storage and management needs of today’s data centers.

About Seagate
Seagate creates space for the human experience by innovating how data is stored, shared and used. Learn more at www.seagate.com. Follow Seagate on Twitter, Facebook, LinkedIn, Spiceworks, YouTubeand subscribe to our blog. 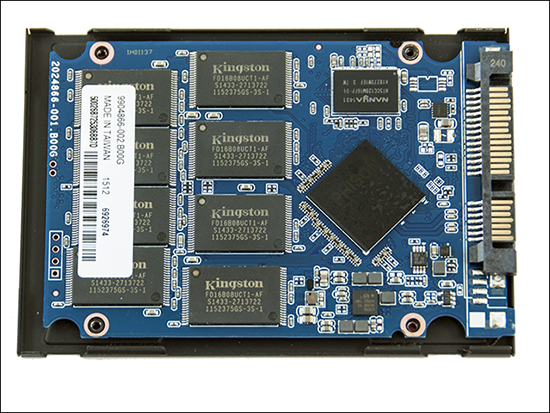