Performance is an area of particular interest for the Mate 8, as it features the Kirin 950 SoC, a HiSilicon product that competes primarily with Qualcomm’s Snapdragon parts among Android devices.

“The Mate 8 is powered by a brand-new Kirin 950 chipset,making it the first smartphone to feature TSMC’s 16 nm FinFET Plus chip technology. The octa-core processor consists of four A72 2.3 GHz cores and four A53 1.8 GHz cores. The Kirin 950 is 30% more efficient than the Kirin 930, delivering fast, long-lasting performance.”

The Kirin 950 is an ARM design, using the familiar big.LITTLE configuration with its 8-core CPU; though it is using the latest Cortex-A72 architecture (soon to be succeeded by the recently annouced Cortex-A73 core). The Mali-T880 graphics are the stock ARM solution, so we shouldn't see anything too surprising with the graphics benchmarks.

"Geekbench 3 is Primate Labs' cross-platform processor benchmark, with a new scoring system that separates single-core and multi-core performance, and new workloads that simulate real-world scenarios. Geekbench 3 makes it easier than ever to find out if your computer is up to speed." 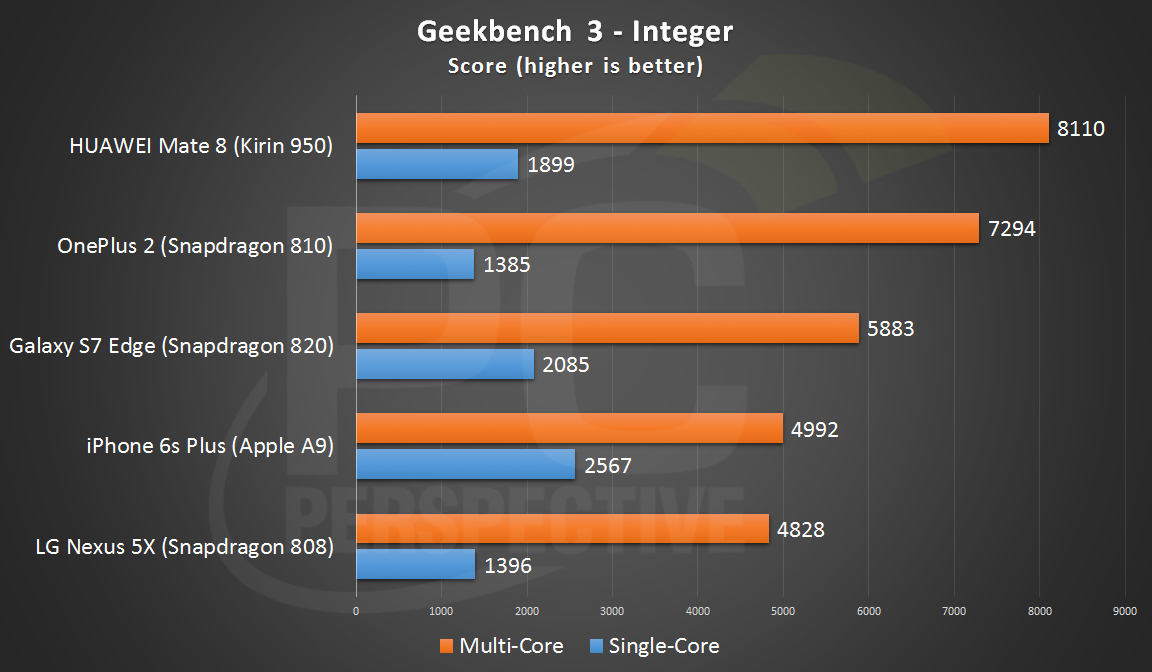 A very good first result here for the Kirin 950, with top marks for multi-threaded integer performance; though it lagged behind the most recent Snapdragon and Apple SoCs – with Apple the single-threaded performance king as usual. Looking at the Nexus 5X and OnePlus 2 results with the recent Snapdragon 808 and 810 (each comprised of Cortex A57 + Cortex A53 cores) we see IPC gains for this latest ARM core, with the SD820's custom Kryo cores outperforming all but Apple here. 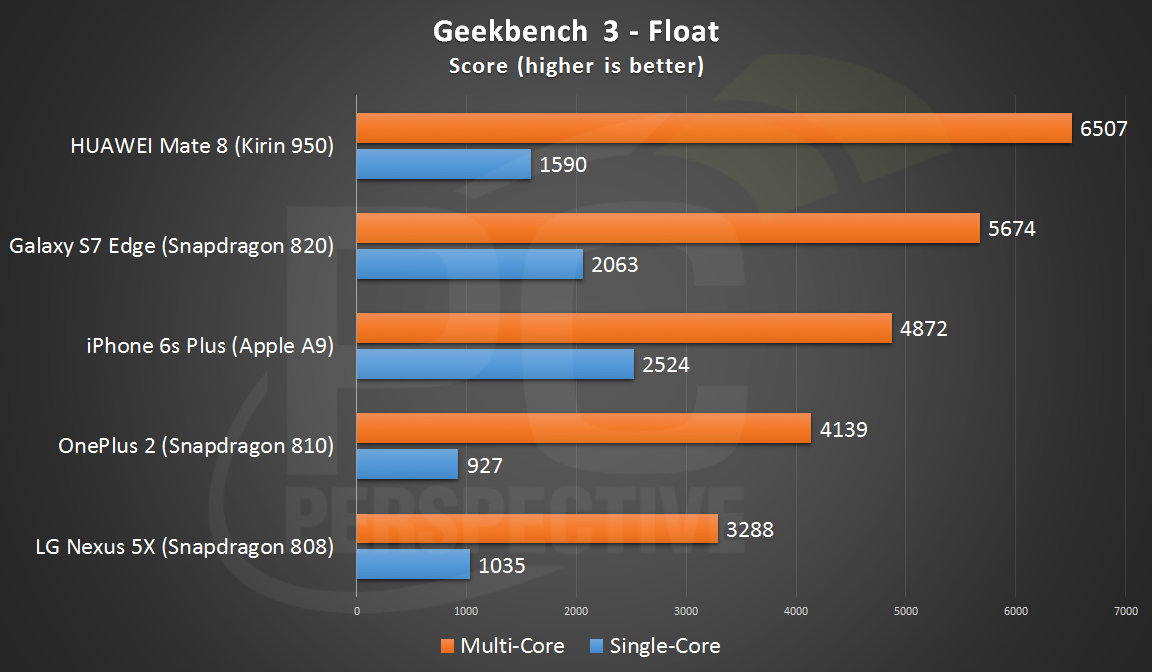 It's pretty much the same story here with the floating-point test, The only significant change is with the SD808 as it takes a larger lead on the bigger SD810 here with single-threaded performance.

"Basemark OS II is a system-level All-In-One benchmarking tool designed for measuring overall performance of smartphones and tablets from all platforms, including Android, iOS and Windows phone 8. 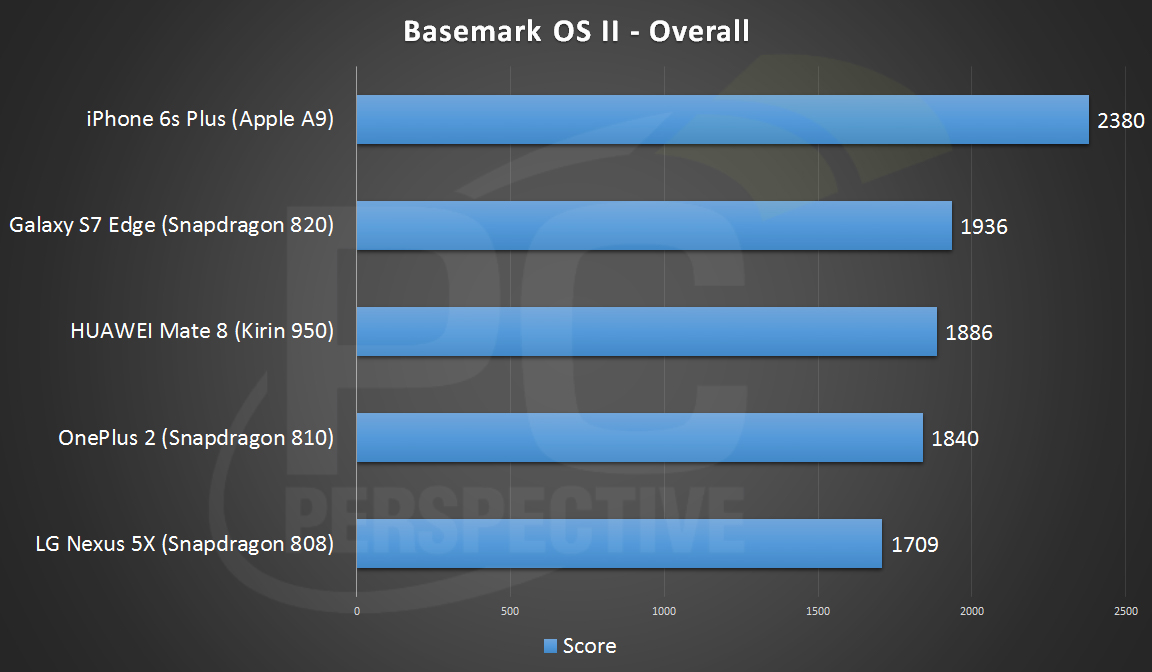 To close out the CPU benchmark results we'll look at the defacto Javascript benchmarks from Google and Mozilla. 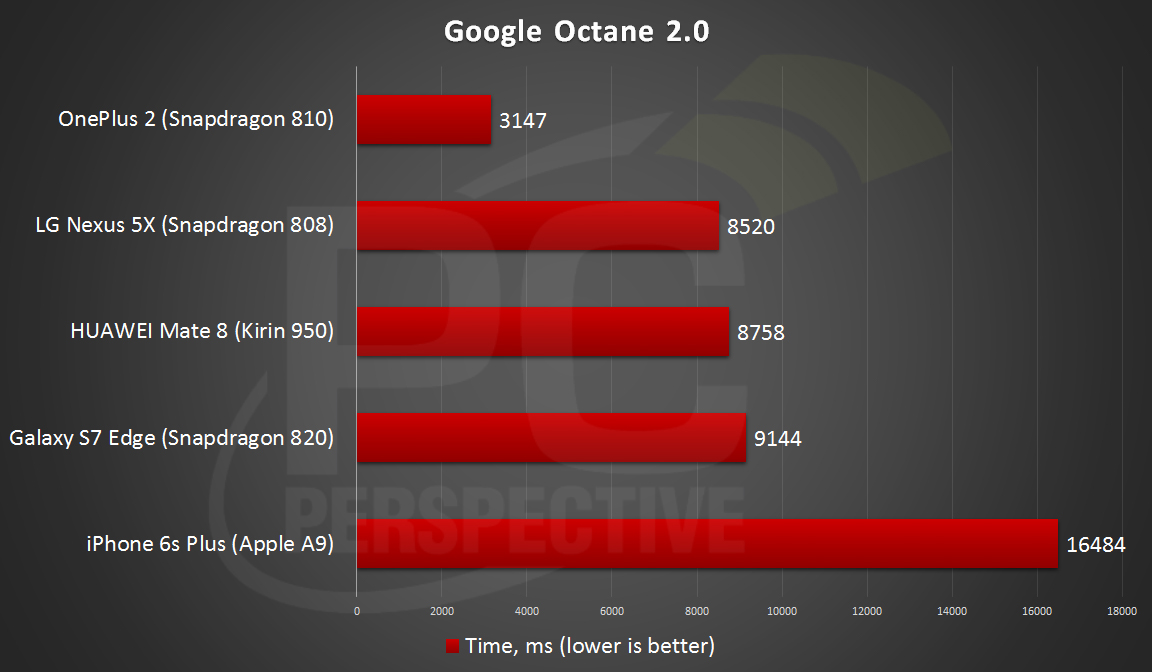 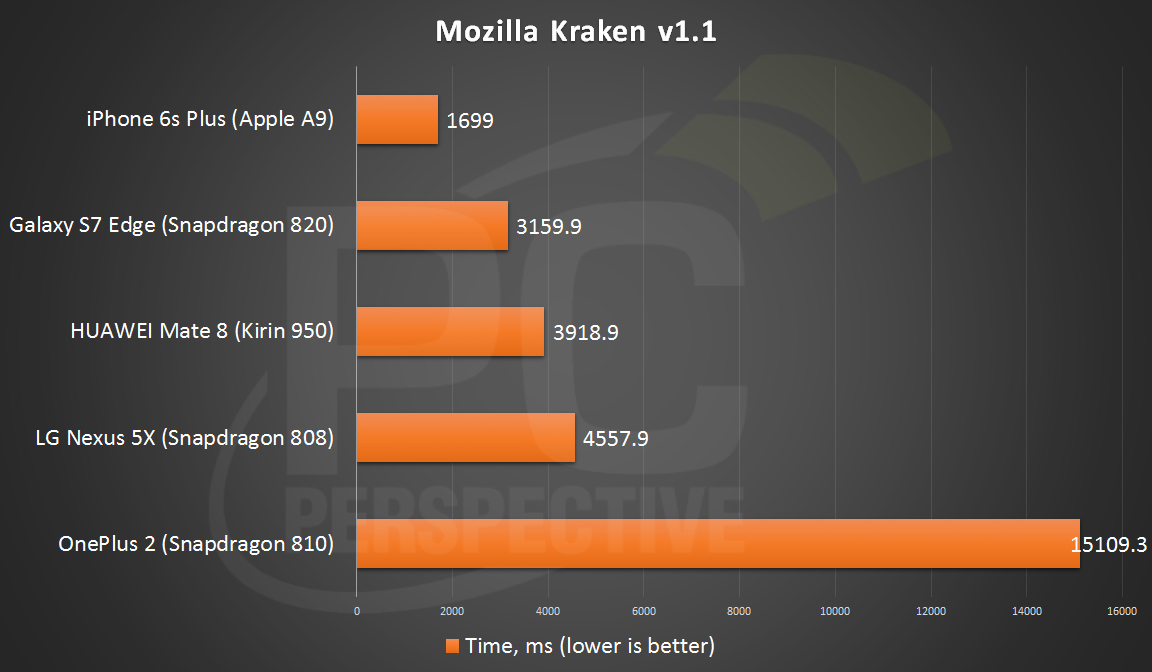 First of all, I have no idea what happened with the Octane 2.0 test with the Apple A9, but I re-ran it several times and got the same result. When I get my hands on a 6s Plus again I'll re-visit this. Probably a mistake. Regardless, I was primarily interested in the Kirin 950 results, which were neck-and-neck with the Snapdragon 808. The the Mate 8 and Nexus 5X seem to offer similar performance.

The results from Mozilla's Kraken test were similar – except the OnePlus 2 and iPhone 6s Plus traded places. Accuracy at the top and bottom of these tests aside, in the middle we have the Mate 8 and the Kirin 950 right there between the Snapdragon 808 and 820.

"3DMark is a cross-platform benchmark used by millions of people, hundreds of hardware review sites and many of the world's leading technology companies. It's the industry standard gaming performance benchmark, a professional-grade testing tool available to you for free." 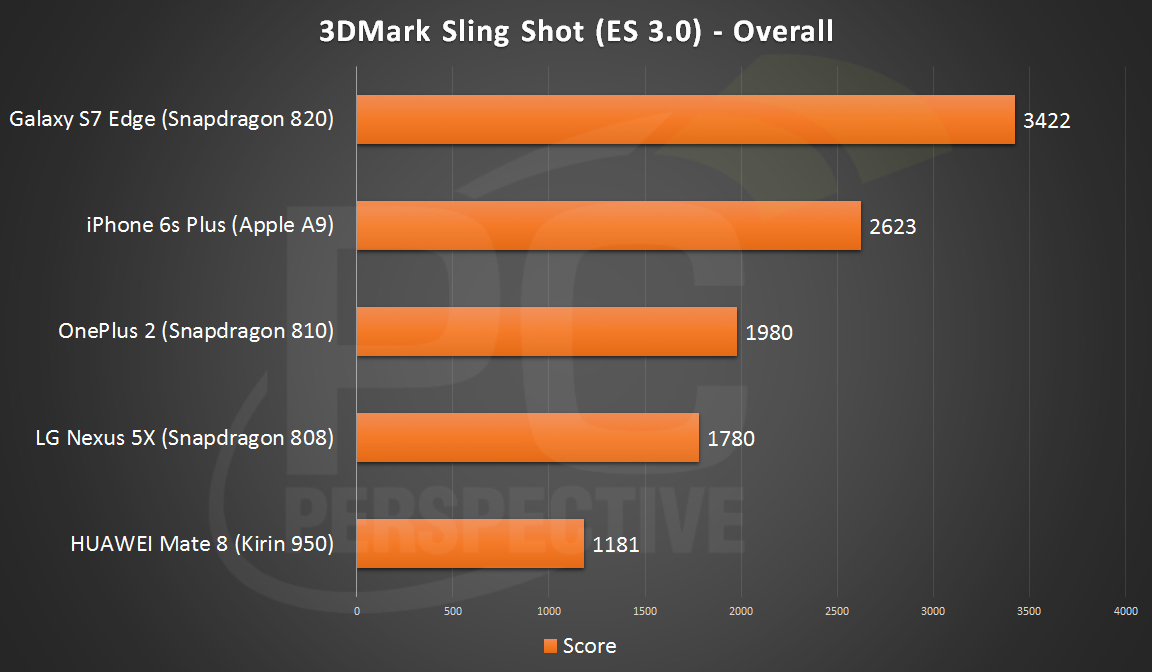 I ran just the Sling Shot benchmark here, using results from the OpenGL ES 3.0 version as not all phones are ES 3.1 enabled yet (I'm looking at you, Apple). As you can see, this wasn't a good benchmark for the Kirin 950's Mali T880 GPU.

Next we'll see how these phones fared in the GFXBench tests: 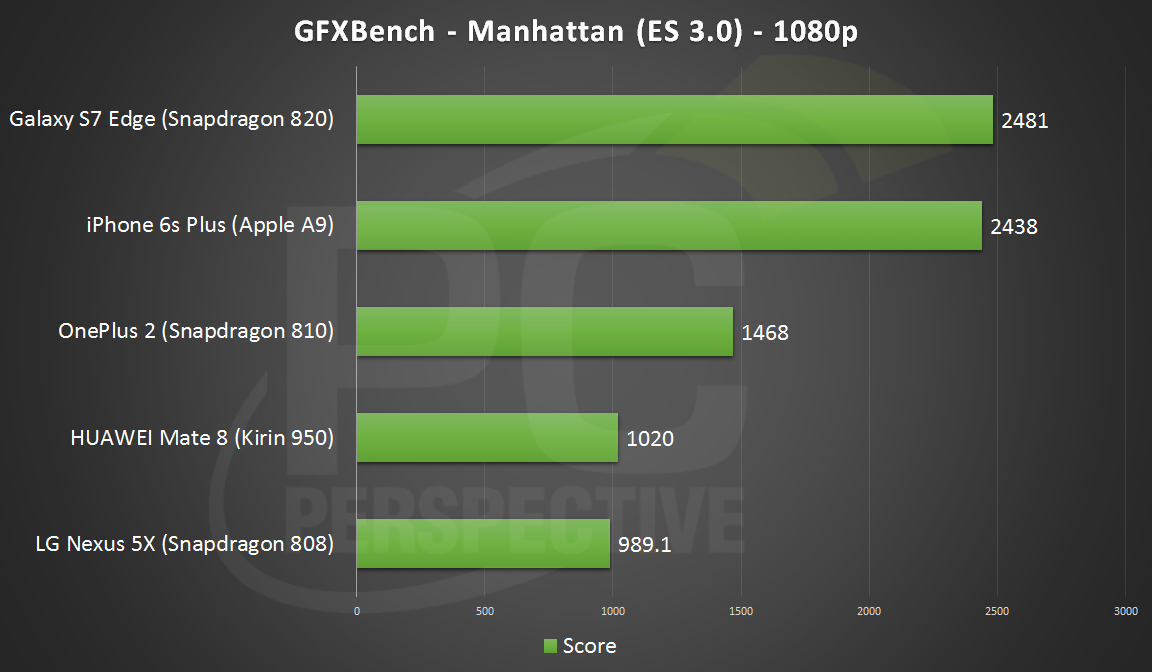 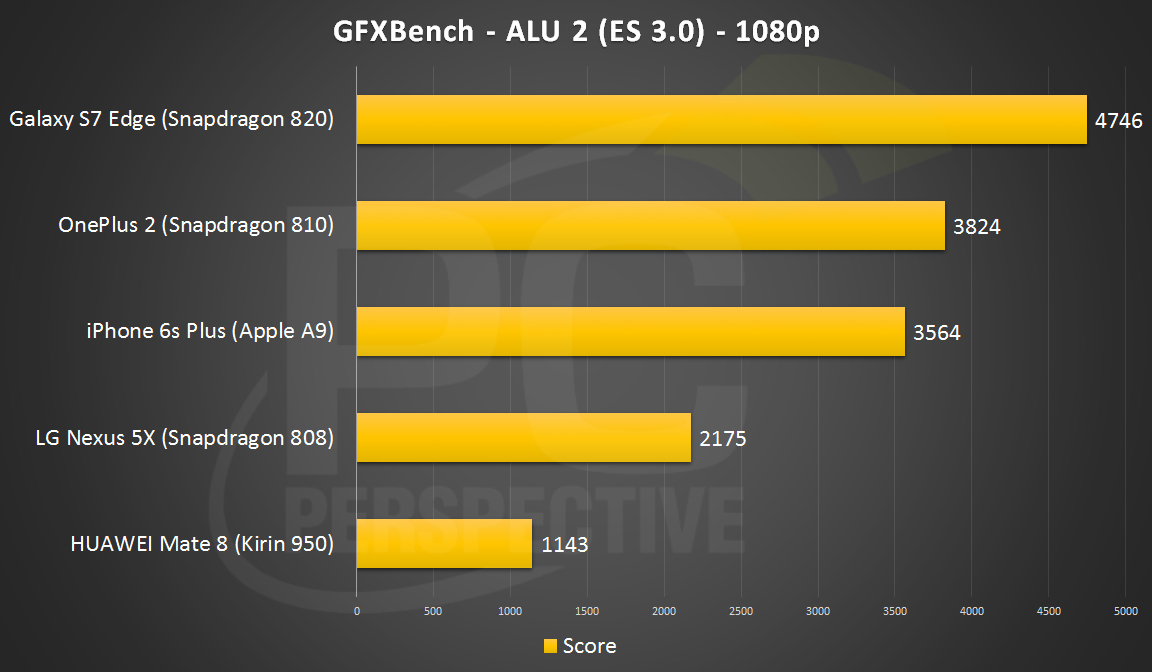 The Kirin 950 is great for productivity, and not so great for raw GPU performance.

Next we'll talk about battery life. 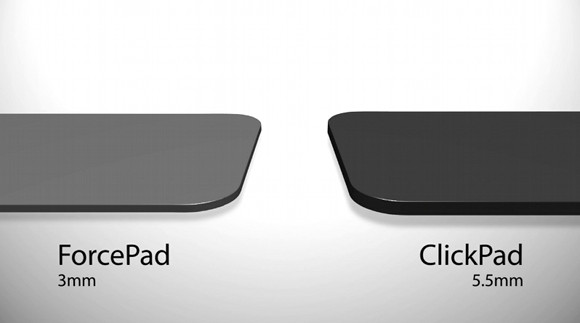