Playback using the app provided test sounds and audio test tracks was clear and distortion free with the 7.1 speaker setup going through the integrated analogue audio ports. Note that the Line-In audio port is used for side speaker connection in a 7.1 setup.

For testing the board's Microphone input port, the microphone from a Kingston HyperX Cloud Gaming audio headset was used to capture a 30 second spoken phrase with the assistance of the Microsoft Voice Recorder application. The resulting audio file was saved to the desktop and played back using Windows Media Player.

Audio pickup perfect and distortion free without Microphone Boost enabled, requiring a recording volume of 50%. Audio pickup improved by enabling the Perfect Voice tools within ASUS' Sonic Studio II interface, but seemed to suffer when more than one audio steam with present in the pickup. 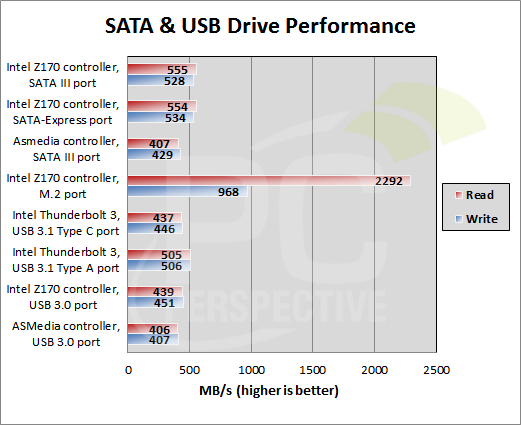 Performance on the Intel-based SATA / SATA-Express ports showed no difference, pushing the SSD's maximums. When connected to the ASMedia SATA port, the SSD performance fell significantly landing just above 400MB/s. The Samsung 950 Pro M.2 drive performed as expected with its performance in the PCIe x4 M.2 slot pushing its performance limits. The performance on the USB 3.1 / 3.0 ports varied greatly most likely resulting from known between different enclosures and the board chipsets rather than actual performance issues with the board ports. The USB 3.1 Type A port performed best with an average of over 500MB/s. The ASMedia USB 3.0 port showed the worst performance at just over 400MB/s, matching that of the ASMedia SATA ports. 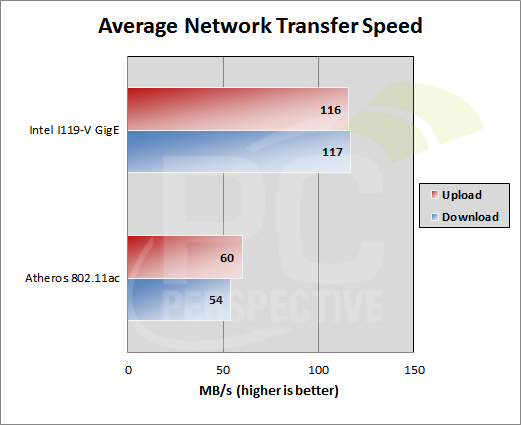 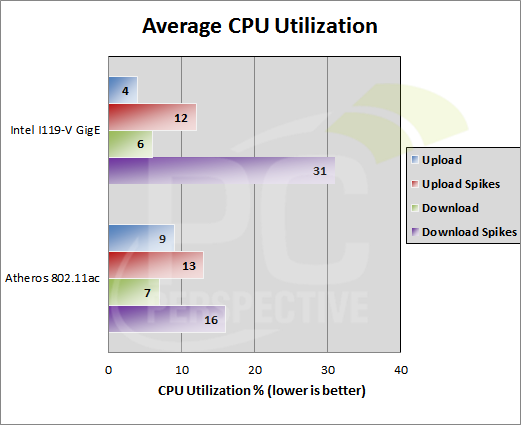 The Intel I219-V GigE network controller exhibited the best performance, with average speeds coming close to 120MB/s. The Atheros 802.11ac wireless controller faired worse, averaging 60MB/s during upload and a slightly slower 54MB/s during download tests. The wireless controller performance suffers in comparison to the wired controller because of packet loss and transfer overhead. In both cases, the CPU utilization remained below a manageable 10% during all tests with spikes into the low teens at several points during the runs. The only exception were performance spikes into the low 30's seen during the Intel controller download tests. 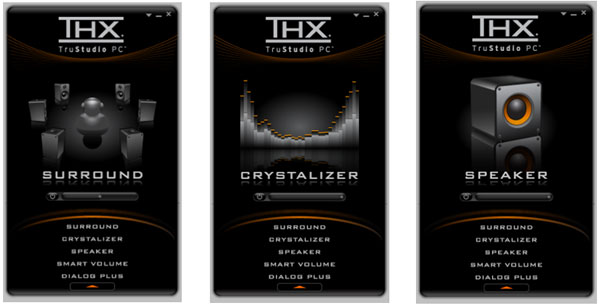