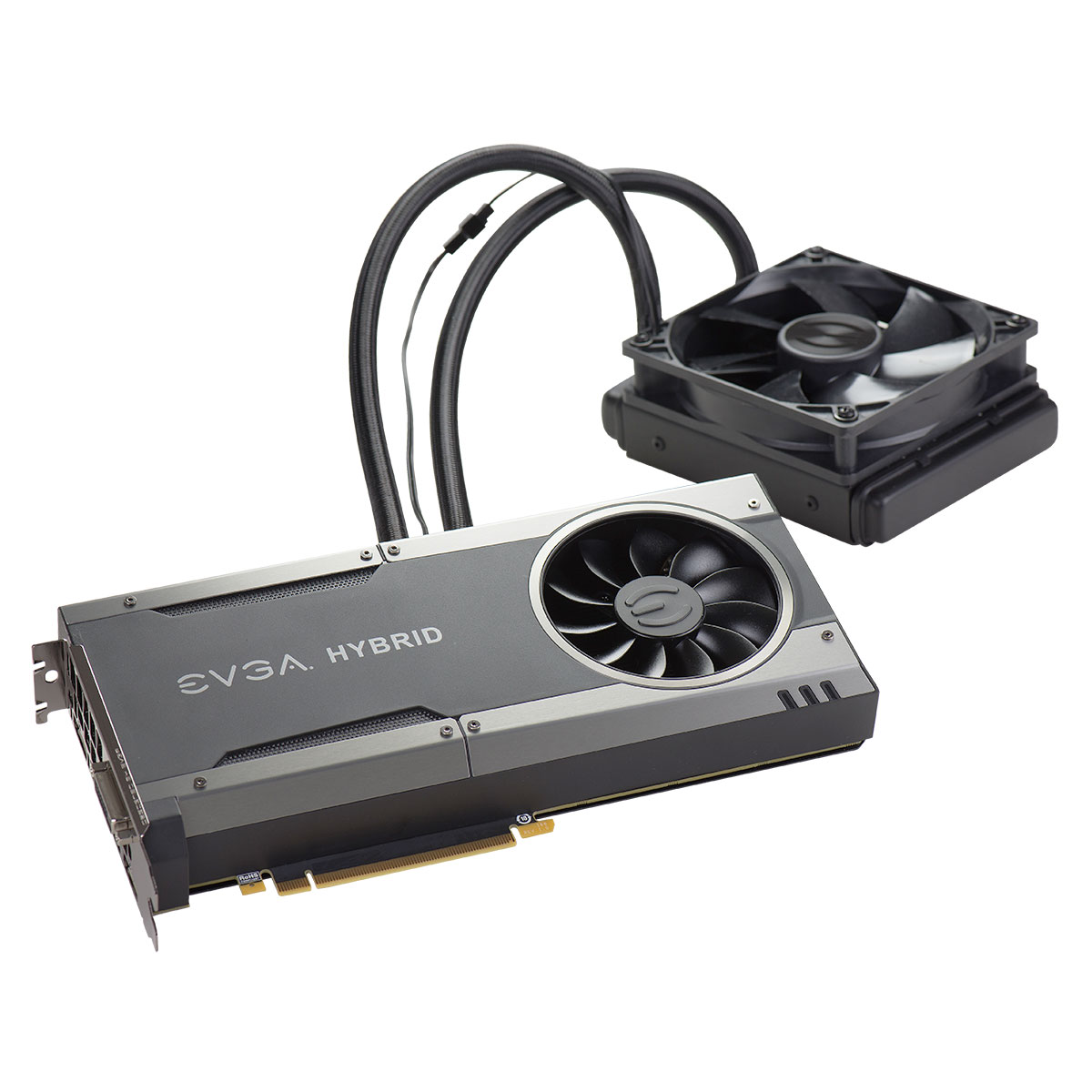 EVGA is preparing to launch the GTX 1070 FTW Hybrid which is a water cooled card that pairs NVIDIA's GTX 1070 GPU with EVGA's Hybrid cooler and custom FTW PCB. The factory overclocked graphics card is currently up for pre-order for $500 on EVGA's website.

The GTX 1070 FTW Hybrid uses EVGA's custom PCB that features two 8-pin power connectors that drive a 10+2 power phase and dual BIOS chips. The Hybrid cooler includes a shrouded 100mm axial fan and a water block that directly touches both the GPU and the memory chips. The water block connects to an external 120mm radiator and a single fan that can be swapped out and/or powered by a motherboard using a standard four pin connector. Additionally, the cooler has a metal back plate and RGB LED back-lit EVGA logos on the side and windows on the front. Display outputs include one DVI, one HDMI, and three DisplayPort connectors.

As far as specification go, EVGA did not get too crazy with the factory overclock, but users should be able to push it quite far on their own assuming they get a decent chip from the silicon lottery. The GP104 GPU has 1920 CUDA cores clocked at 1607 MHz base and 1797 MHz boost. However, the 8 GB of memory is clocked at the stock 8,000 MHz. For comparison, reference clock speeds are 1506 MHz base and 1683 MHz boost.

Interestingly, EVGA rates the GTX 1070 FTW Hybrid at 215 watts versus the reference card's 150 watts. It is also the same TDP rating as the GTX 1080 FTW Hybrid card.

The table below outlines the specifications of EVGA's water cooled card compared to the GTX 1070 reference GPU and the GTX 1080 FTW Hybrid.

According to EVGA, the Hybrid cooler offers up GPU and memory temperatures to 45°C and 57°C respectively compared to reference temperatures of 80°C and 85°C. Keeping in mind that these are EVGA's own numbers (you can see our Founder's Edition temperature results here), the Hybrid cooler seems to be well suited for keeping Pascal GPUs in check even when overclocked. In reviews of the GTX 1080 FTW Hybrid, reviewers found that the Hybrid cooler allowed stable 2GHz+ GPU clock speeds that let the card hit their maximum boost clocks and stay there under load. Hopefully the GTX 1070 version will have similar results. I am interested to see whether the memory chips they are using will be capable of hitting at least the 10 GHz of the 1080 cards if not more since they are being cooled by the water loop.

You can find more information on the factory overclocked water cooled graphics card on EVGA's website. The card is available for pre-order at $500 with a 3 year warranty.

Pricing does seem a bit high at first glance, but looking around at other custom GTX 1070 cards, it is only at about a $50 premium which is not too bad in my opinion. I will wait to see actual reviews before I believe it, but if I had to guess the upcoming card should have a lot of headroom for overclocking and I'm interested to see how far people are able to push it!