Over the holiday weekend a leaked Geekbench benchmark result on an engineering sample AMD Zen processor got tech nerds talking. Other than the showcase that AMD presented a couple weeks back using the Blender render engine, the only information we have on performance claims come from AMD touting a "40% IPC increase" over the latest Bulldozer derivative.

The results from Geekbench show performance from a two physical processor system and a total of 64 cores running at 1.44 GHz. Obviously that clock speed is exceptionally low; AMD demoed Summit Ridge running at 3.0 GHz in the showcase mentioned above. But this does give us an interesting data point with which to do some performance extrapolation. If we assume perfect clock speed scaling, we can guess at performance levels that AMD Zen might see at various clocks.

I needed a quick comparison point and found this Geekbench result from a Xeon E7-8857 v2 running at 3.6 GHz. That is an Ivy Bridge based architecture and though the system has 48 cores, we are only going to a look at single threaded results to focus on the IPC story.

Obviously there are a ton of caveats with looking at data like this. It's possible that AMD Zen platform was running in a very sub-optimal condition. It's possible that the BIOS and motherboard weren't fully cache aware (though I would hope that wouldn't be the case this late in the game). It's possible that the Linux OS was somehow holding back performance of the Zen architecture and needs update. There are many reasons why you shouldn't consider this data a final decision yet; but that doesn't make it any less interesting to see.

In the two graphs below I divide the collection of single threaded results from Geekbench into two halves and there are three data points for each benchmark. The blue line represents the Xeon Ivy Bridge processor running at 3.6 GHz. The light green line shows the results from the AMD Zen processor running at 1.44 GHz as reported by Geekbench. The dark green line shows an extrapolated AMD Zen performance result with perfect scaling by frequency. 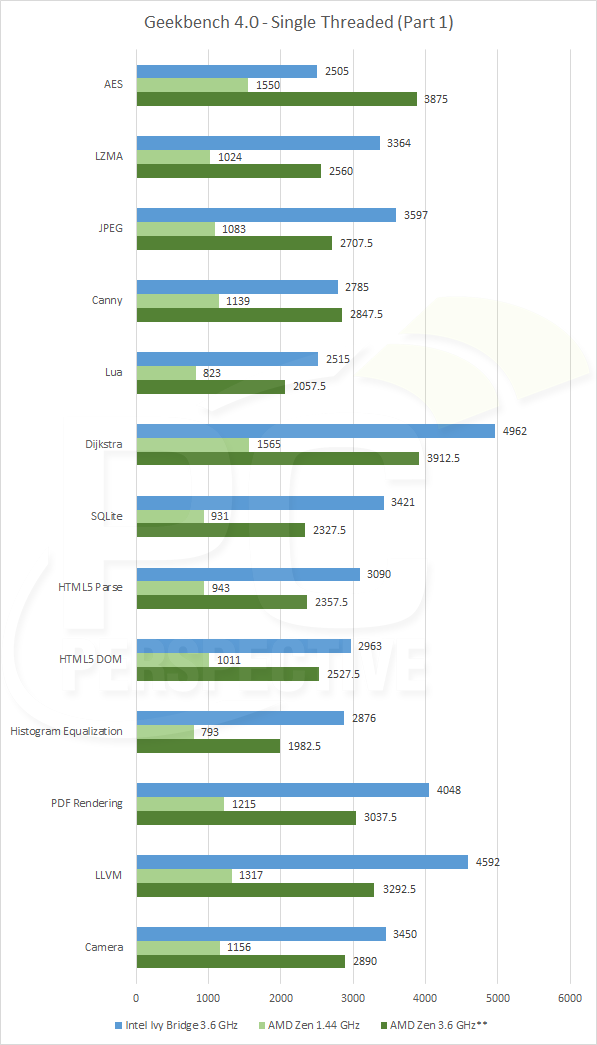 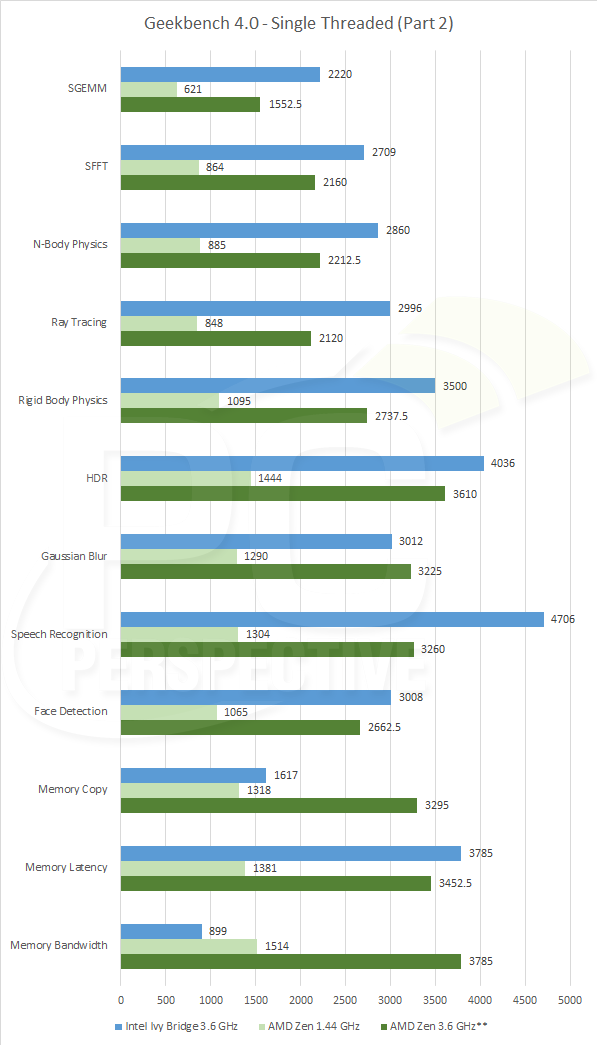 There are three tests in this benchmark, the AES encryption, Canny and Gaussian Blur, where the AMD Zen extrapolated results have an edge over Intel's Ivy Bridge. The AES results are probably the most compelling though we have definitely seen AES performance increases in Haswell, Broadwell and Skylake since this Xeon processor was released in early 2014.

Basically all of the other compute task based tests show the advantage going to Intel's Xeon processor running at 3.6 GHz. On average, if these results are at all indicative of what AMD Zen will be in the next 4 months, then it will be ~70-80% of the IPC of Ivy Bridge. 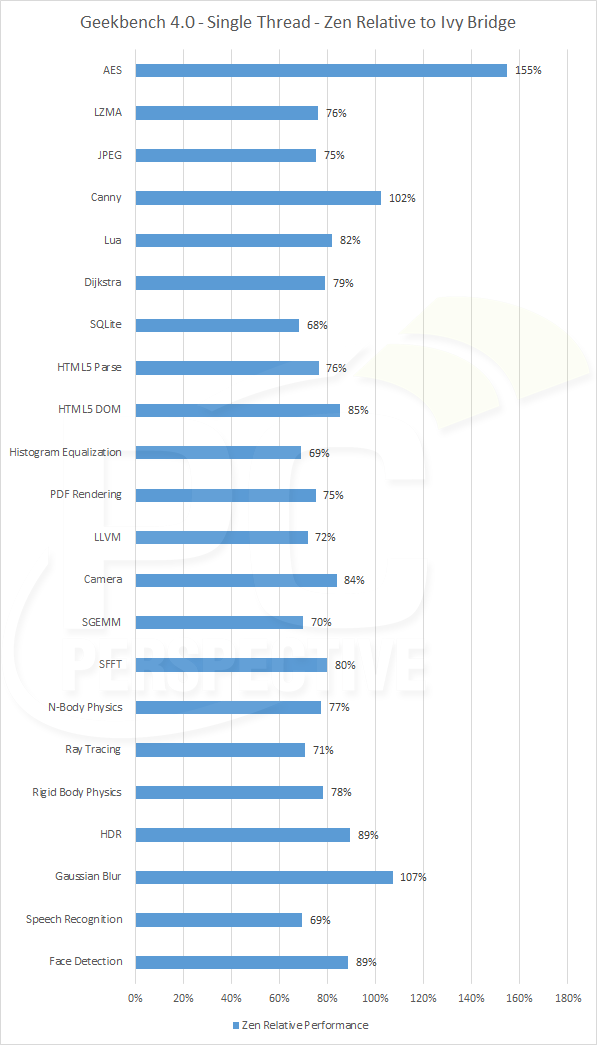 This relative performance graph removes the last three memory tests as it is very unlikely that memory bandwidth or latency will shift by simple linear scaling with clock speed.

What does this mean for AMD and the Zen architecture? It could mean absolutely nothing if the benchmark results we have here from a Zen CPU running at 1.44 GHz are simply not accurate, or not optimized. It might tell us that AMD and its partners have some work to do to optimize the platform in general for better overall performance, but with only months until stated product availability and partners already receiving samples this month, it looks less likely that we'll see dramatic changes from the numbers above.

This is Zen going up against Ivy Bridge and a Xeon processor that was released in Q1 of 2014. AMD needs to make its next CPU competitive not just against this but against Skylake-K and Broadwell-E systems if they want to impress the consumer and the press like they did back at IDF in August. Is it possible that AMD will be able to get Zen to 4.0 GHz and beyond in 8-core systems and thus will utilize clock speed to make up some of this IPC performance gap we show here? It's possible – though AMD needs to do it while maintaining processor thermals within a reasonable level. Doing some quick napkin math, in order for the AMD Zen results to swap wins and loses with the 3.6 GHz Xeon running on Ivy Bridge, this pre-production setup would have to run at around 4.8 GHz.

Again, I must reiterate, the results and graphs we have here are nowhere near finalized and could be an AMD red herring or the result of very early prototype hardware.