The A10 Fusion SoC

Apple has made the leap from their previous dual-core A-series designs to a new quad-core solution with the A10 Fusion SoC. This new chip is configured, it seems, much like ARM’s big.LITTLE designs: as Apple states, there are two high performance cores and two high efficiency cores, the latter running at only ⅕ speed. Only one pair of cores is active at a time, however – so this is not a "quad-core" design in the conventional sense. Benchmarks still list the iPhone 7 as a dual-core device, as only the performance cores are active when using these applications.

The A10 Fusion is listed at 2.34 GHz per core in benchmark applications, and this marks a significant uptick in core clock speed from the A9 found in last year’s iPhone 6s, which was a dual-core 1.84 GHz design. Aside from any other refinements, a 500 MHz boost should translate into significantly better performance compared to the A9, which was already the king of single-threaded performance. I ran both the iPhone 7 and 7 Plus through some standard benchmarks to find out where the A10 Fusion stands. 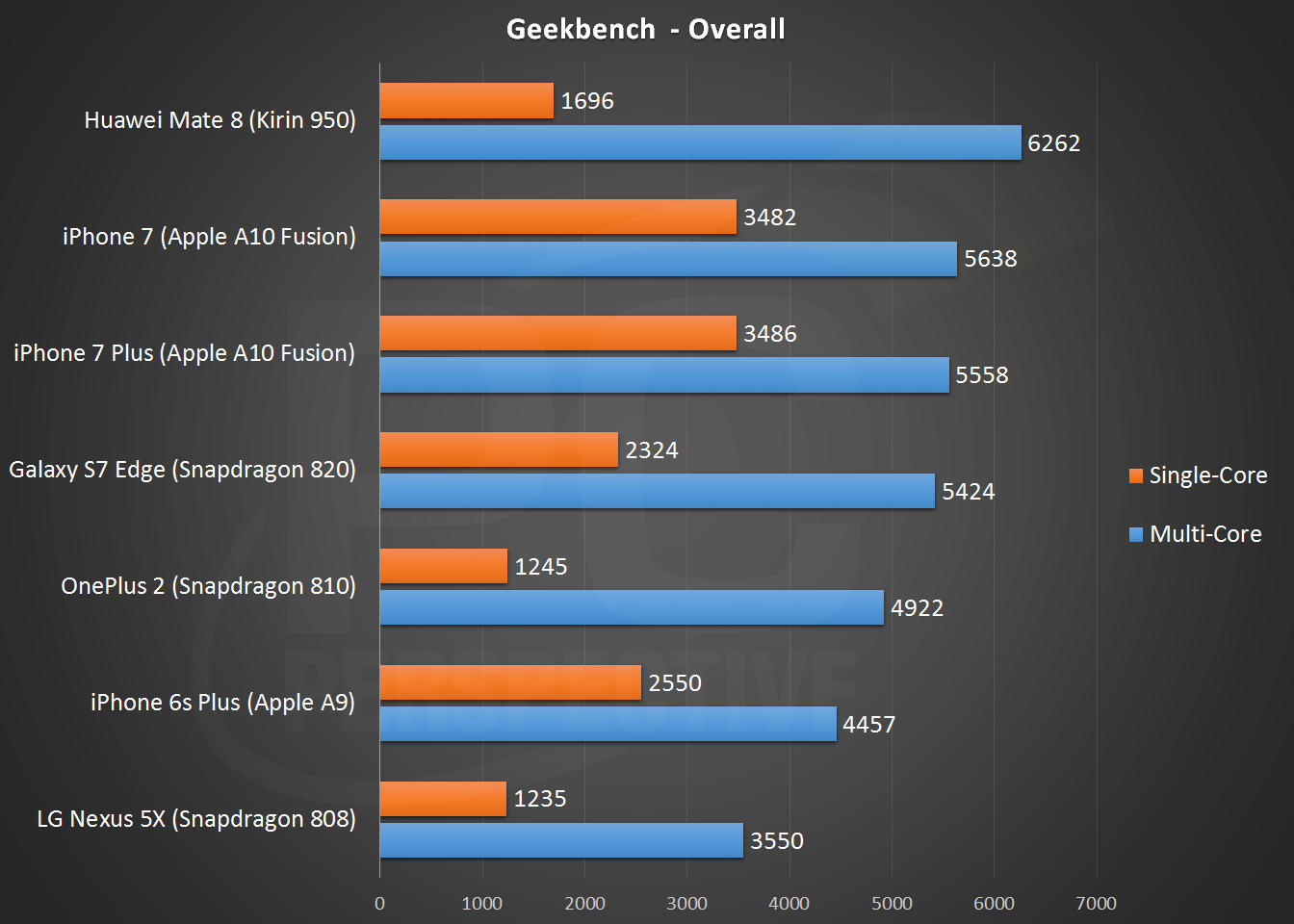 With Geekbench there is now the A10 Fusion, and then everything else. Look at those single-core results! Nearly 1000 points higher than the A9, and head and shoulders over everything else – other than the Snapdragon 820, which performs very well. Huawei's Kirin 950 processor is still on top of the multi-core tests, but it has the advantage in core count as well. 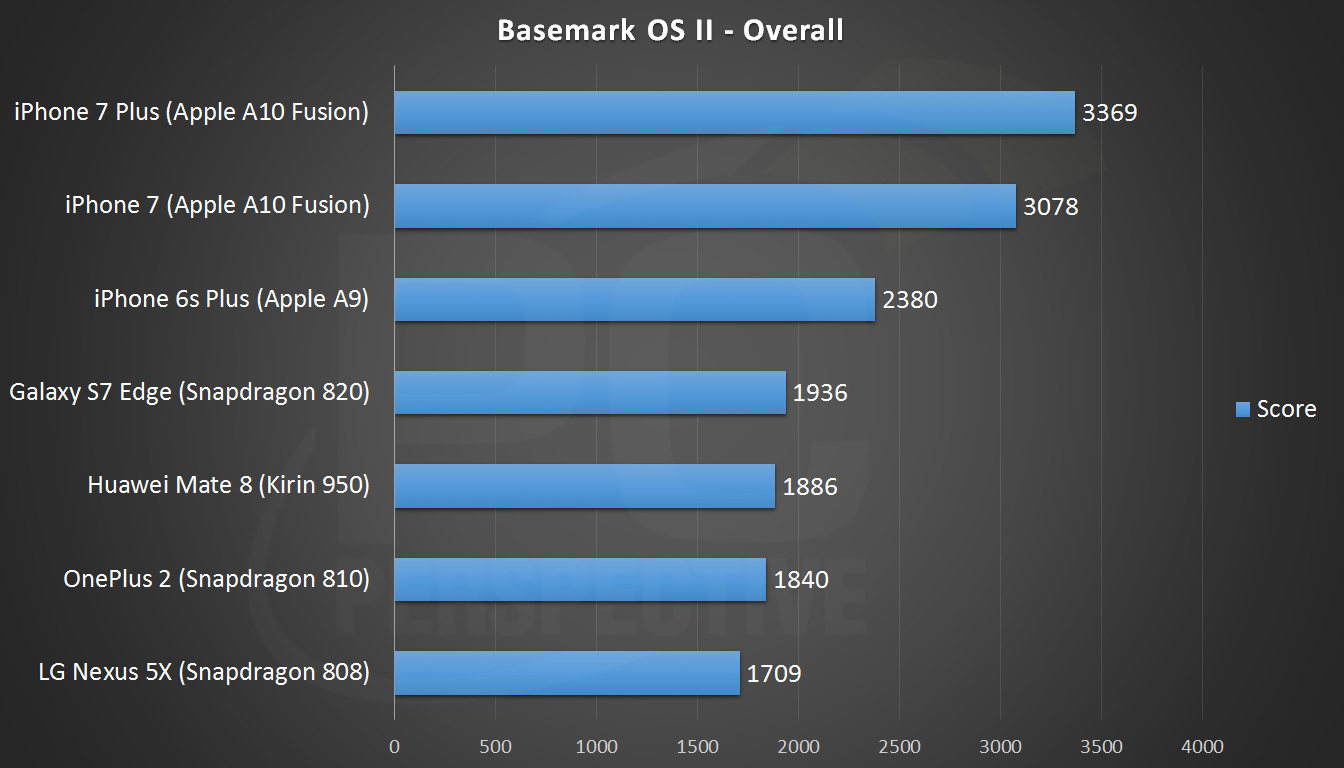 Basemark provides a look at overall CPU performance for common tasks, and here the Apple SoCs dominate. But as impressive as last year's A9 was, the numbers with the A10 Fusion are just incredible. Apple has a huge advantage in being the only SoC maker that also designs the OS, and the level of optimization this allows is clearly demonstrated here.

I next ran a couple of browser benchmarks, with Safari for iOS and Chrome running on the Android devices. 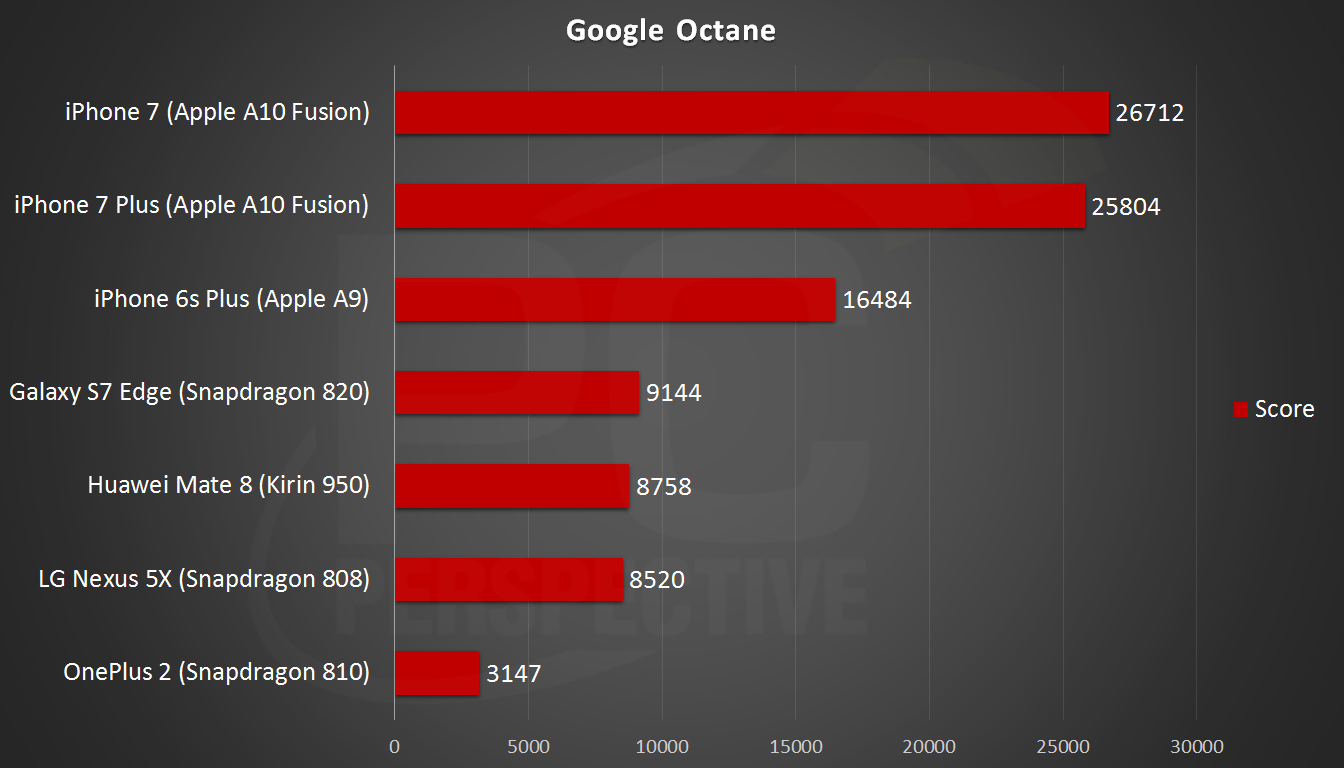 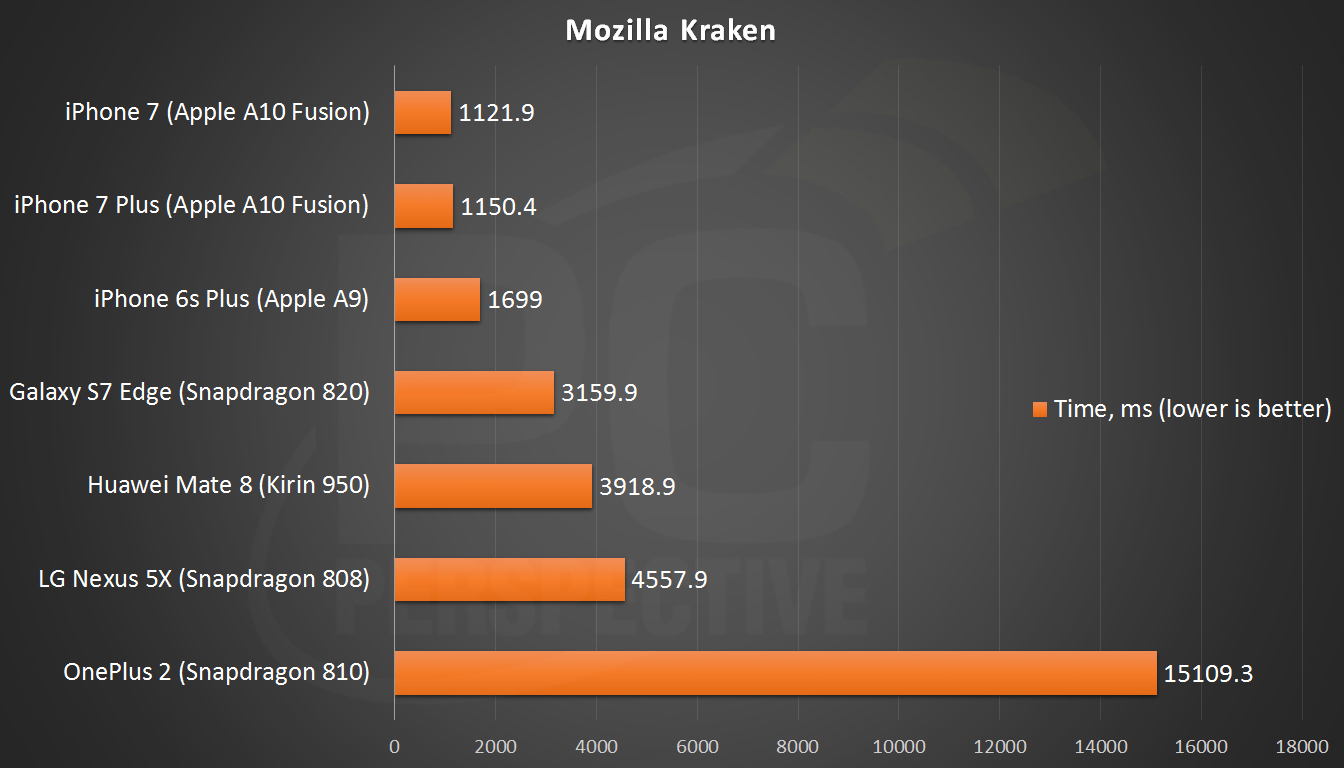 Once again, the lightning-fast A10 Fusion SoC, combined with the unparalleled optimization of iOS and Safari, nets the iPhone 7's another pair of blowout wins. (I don't know why the OnePlus 2 did so poorly in these tests, but all results were compiled from three separate benchmark runs, and the performance was consistent.)

The GPU in the A10 Fusion is not listed anywhere by name, and no analysis from Chipworks or any other known outlet has answered this question. It would appear to be similar to the A9’s PowerVR GT7600, but without a large clock increase it would be hard to explain the claimed 50% performance boost from a six-core design based on existing architecture.

I ran the iPhone 7 and 7 Plus through a few graphics tests to see if Apple’s performance claims held up. 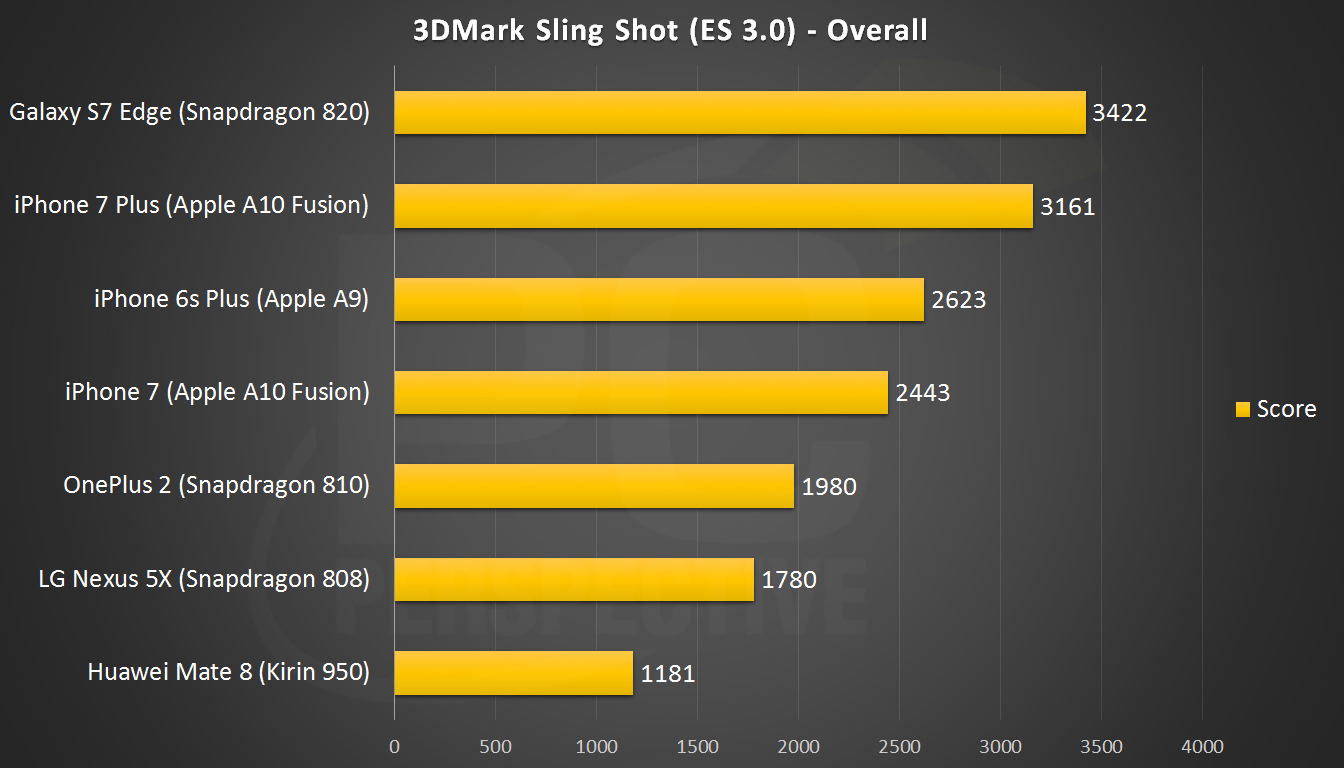 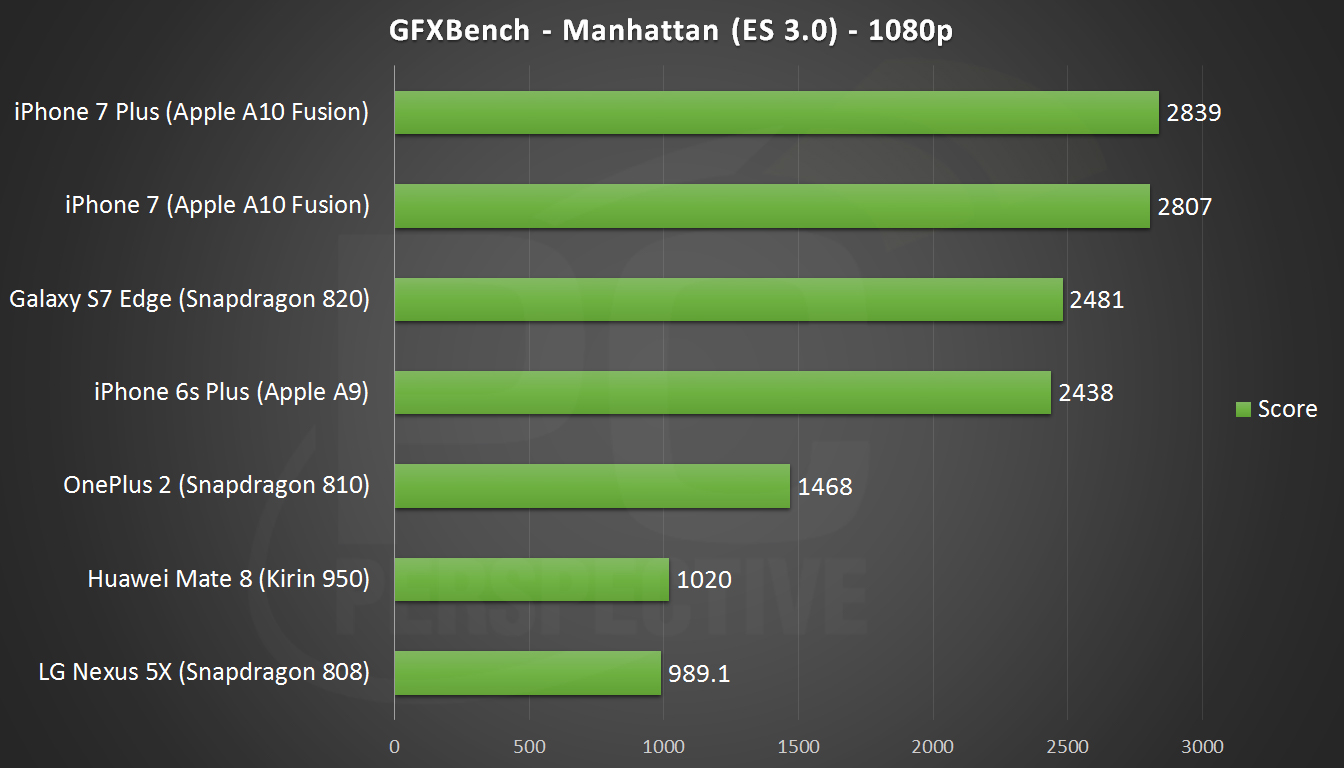 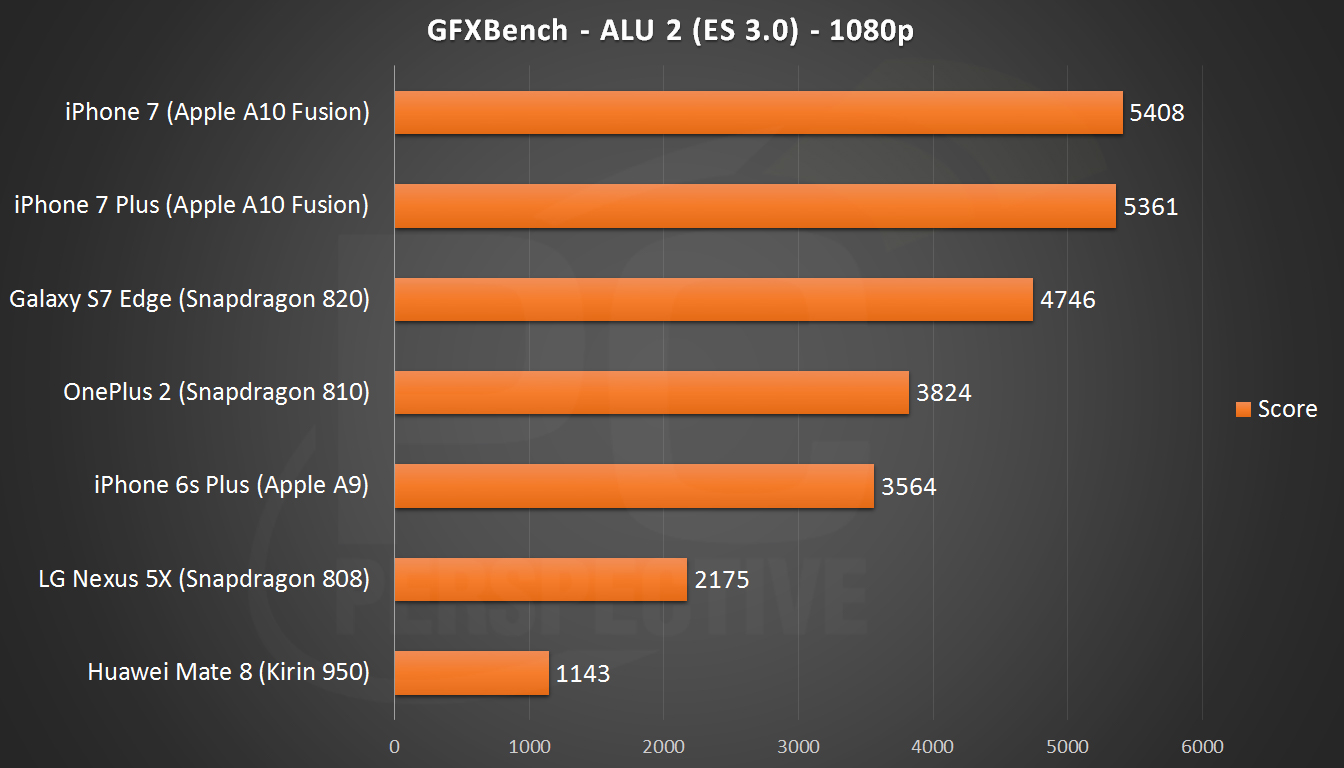 While a small sample, these benchmarks do show improvement over the previous models in graphics power. It is less significant than the jump we saw with CPU power, and (as mentioned above) little is known about the configuration of the iPhone 7 GPU. Is it simply the six-core PowerVR GT7600 graphics from last year, clocked higher? Pure speculation, though a clock speed boost would result in the higher performance seen here. 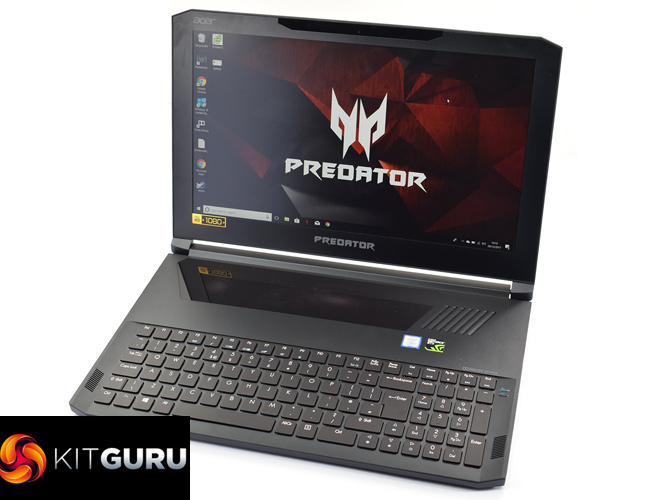