The goal of this little experiment is to prove a couple of things. First, that integrated graphics, even on the higher cost ASUS machine with the Core i7-6700 processor in it, just isn't capable of playing modern games at even the lowest available image quality settings. Second, I want to show that for a low cost (in the land of PC building) you can take these otherwise incapable computers and turn them into surprisingly robust gaming PCs if you target 1080p resolutions and moderate image quality settings.

The games I decided to test this time, besides running 3DMark Sky Diver and Fire Strike to get a baseline, were Dirt Rally, Rise of the Tomb Raider and Doom. All three are “modern” in that they offer impressive visuals for their different game types without being the “Crysis” of the generation (meaning they require more horsepower than they should to run).

Let’s start by looking at results from the 3DMark benchmark. I ran both Sky Diver and Fire Strike, though you’ll see that the Dell machine wasn’t actually able to run the more strenuous test. 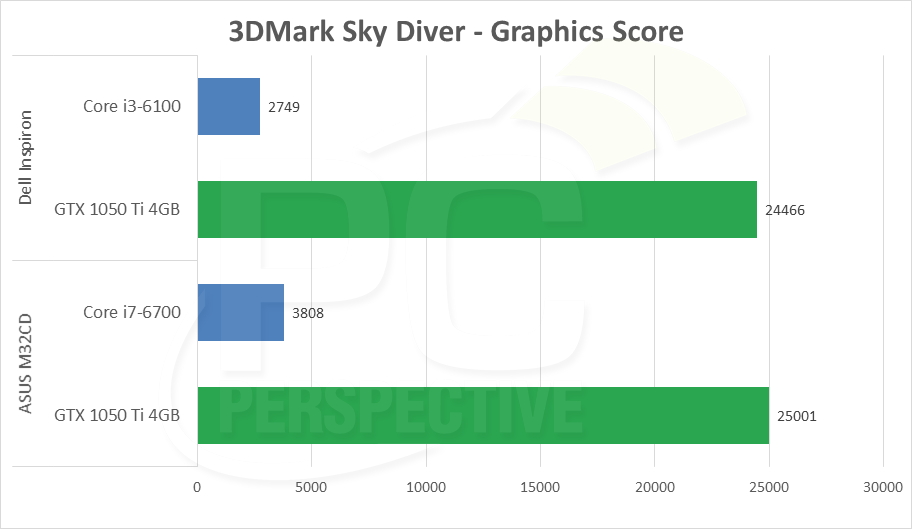 Sky Diver shows a gap between the two machines with integrated graphics only, about 38% in fact. Considering both are marketed as having the same GPU product…that’s disappointing. In the end, it doesn’t really matter though: the GeForce GTX 1050 Ti card simply blows away these scores, netting around 25,000 points each. That is an 8.9x improvement in performance on the Dell machine and a 6.5x improvement on the ASUS! 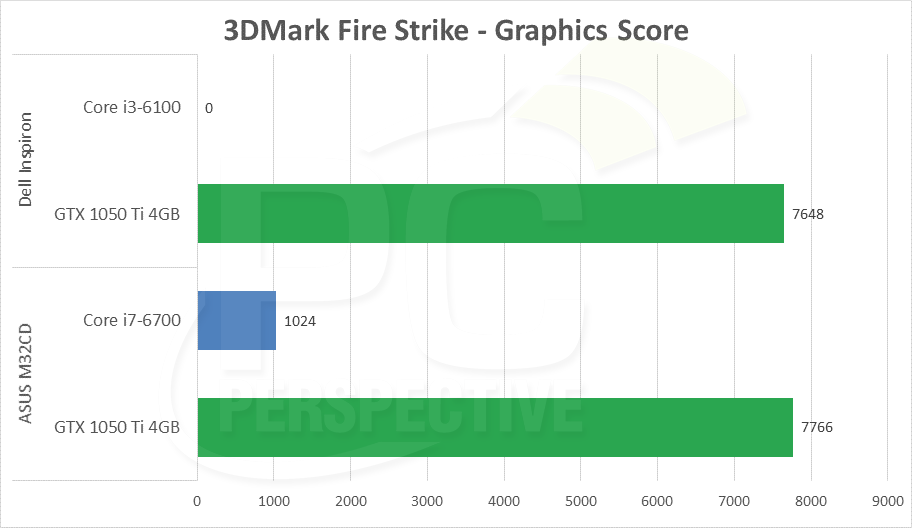 The Fire Strike test wouldn’t run at all on the Core i3-6100 system, but it wouldn’t have mattered if it did. The frame rate resulting on the Core i7-6700 was in the single digits before installing the GTX 1050 Ti. On the ASUS M32CD the NVIDIA add-in card results in a 7.5x increase in performance.

Now we’ll dive into the real-world gaming tests. First up, Dirt Rally running at 1920×1080 and the Low quality preset. 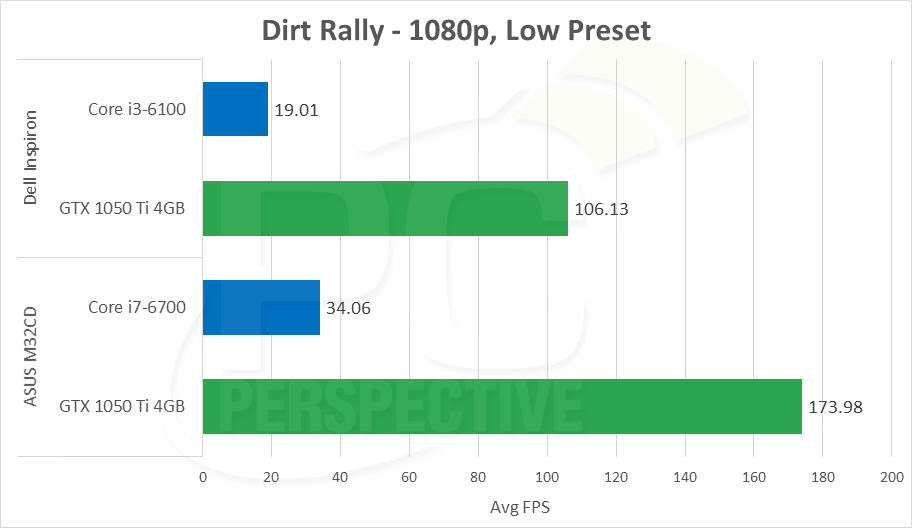 While I again noted a pretty big gap between the Core i7-6700 and Core i3-6100 in integrated only testing, even a frame rate of 34 FPS is going to be tough to handle in a fast paced racing simulator like Dirt Rally. The good news is that with the GeForce GTX 1050 Ti, both systems were able to push incredibly high frame rates. The Dell Inspiron suffers a little with the inclusion of the Core i3-6100 dual-core processor compared to the ASUS with the quad-core Core i7-6700, and you can see a significant delta in performance because of it (60%).

Obviously another way to take advantage of this performance advantage after you install the GeForce GTX 1050 Ti is to increase quality settings. A frame rate of 173 FPS is great but is mostly unnecessary. Instead, I found that I could easily play Dirt Rally at the Ultra quality preset and still maintain 60+ FPS while getting much better looking imagery as well. 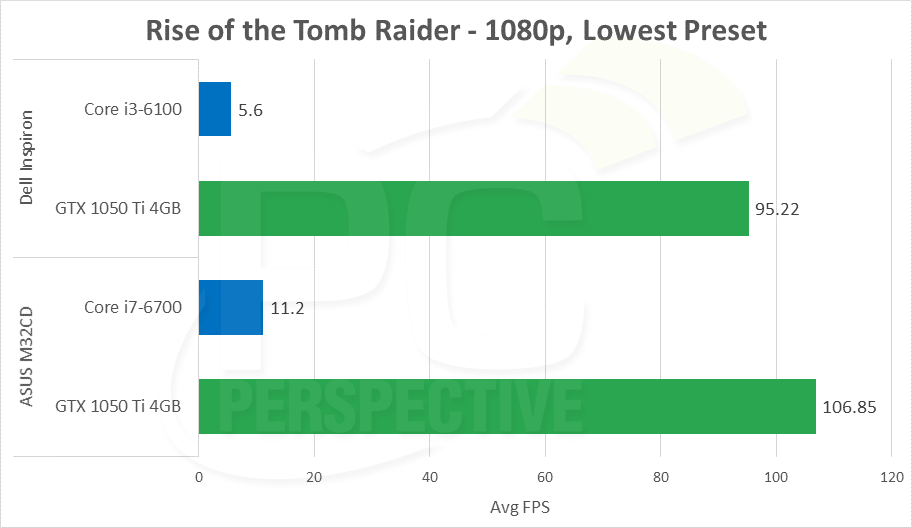 In Rise of the Tomb Raider, again running at 1080p and the Lowest preset available in the options, the integrated graphics had no chance of making this game run. After installing the MSI GTX 1050 Ti however, the game was not just playable but we same frame rates near the 100 FPS mark again! Both systems see 17x and 9.5x frame rate improvements, respectively!

Again, rather than run at super high frame rates, I would recommend you play the game on the High quality preset to enjoy this iteration of the Tomb Raider franchise with improved visuals and a more than adequate frame rate. This is the flexibility that higher performing discrete graphics can offer. 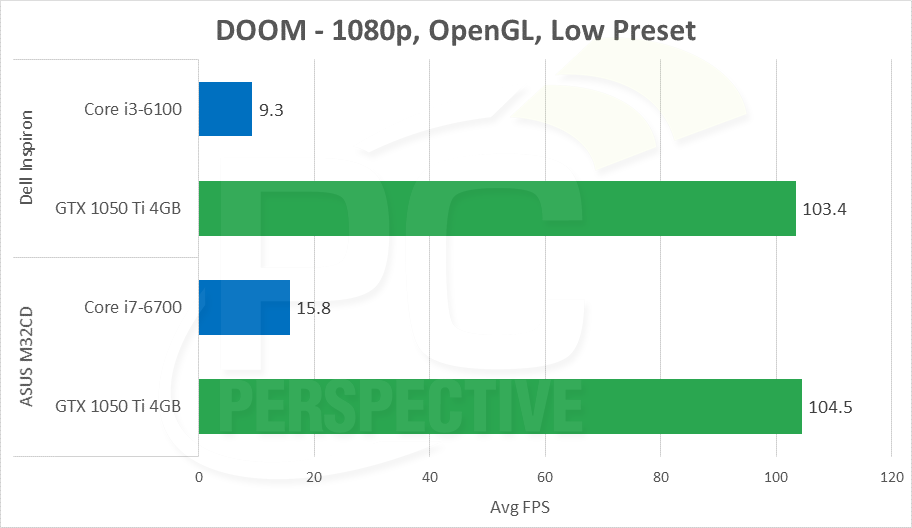 Finally, we end our gaming tests with the new Doom title. Again, the difference in experience (if you can even call it that with the integrated graphics) between the Intel and NVIDIA solutions is night and day. On the Dell machine the new GPU gives you an 11x improvement in frame rate while the ASUS system sees a 6.6x change. And once more, I would actually recommend that you switch from the Low preset to the High preset with both configurations, enjoying the game at more than 60 FPS but with much better visuals at 1080p. 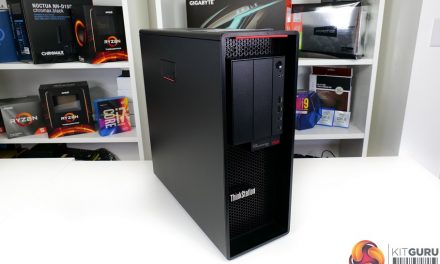