AMD is publishing its third annual “big” driver release, dubbed ReLive, with a new capture tool and the ability to “chill.”

For the past two years, AMD has made a point of releasing one major software update to Radeon users and gamers annually. In 2014 this started with Catalyst Omega, a dramatic jump in performance, compatibility testing and new features were the story. We were told that for the first time in a very long while, and admitting this was the most important aspect to me, AMD was going to focus on building great software with regular and repeated updates. In 2015 we got a rebrand along with the release: Radeon Software Crimson Edition.  AMD totally revamped the visual and user experience of the driver software, bringing into the modern world of style and function. New features and added performance were also the hallmarks of this release, with a stronger promise to produce more frequent drivers to address any performance gaps, stability concerns and to include new features.

For December 2016 and into the new year, AMD is launching the Radeon Software Crimson ReLive Edition driver. While the name might seem silly, it will make sense as we dive into the new features.

While you may have seen the slides leak out through some other sites over the past 48 hours, I thought it was worth offering my input on the release.

Not a performance focused story

The first thing that should be noted with the ReLive Edition is that AMD isn’t making any claims of substantially improved performance. Instead, the Radeon Technologies Group software team is dedicated to continued and frequent iterations that improve performance gradually over time. 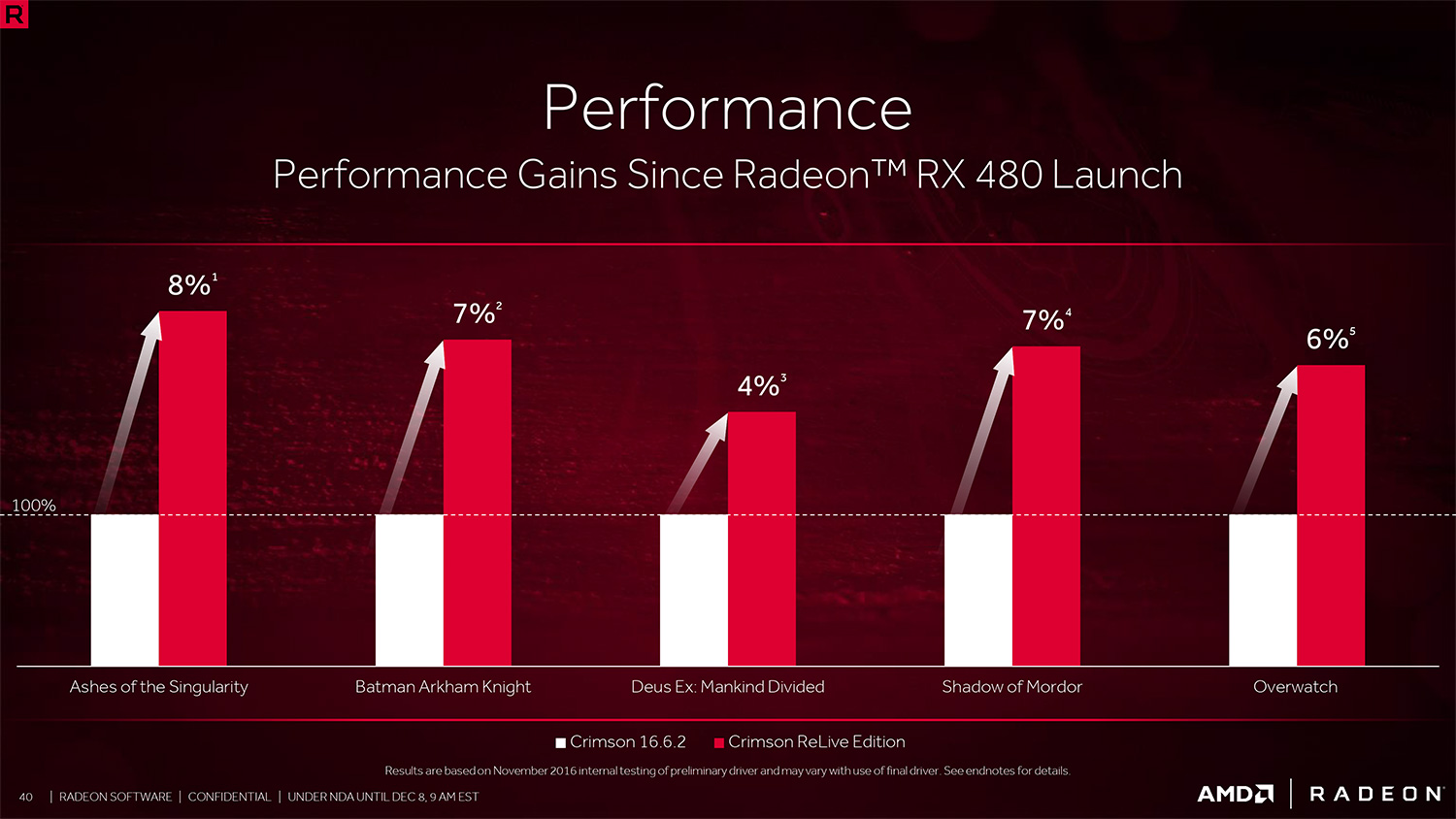 As you can see in the slide above, AMD is showing modest 4-8% performance gains on the Radeon RX 480 with the Crimson ReLive driver, and even then, its being compared to the launch driver of 16.6.2.  That is significantly lower than the claims made in previous major driver releases. Talking with AMD about this concern, it told us that they don’t foresee any dramatic, single large step increases in performance going forward. The major design changes that were delivered over the last several years, starting with a reconstruction of the CrossFire system thanks to our testing, have been settled. All we should expect going forward is a steady trickle of moderate improvements.

(Obviously, an exception may occur here or there, like with a new game release.)

So, what is new? The namesake feature for this driver is the Radeon ReLive application that is built in. ReLive is a capture and streaming tool that will draw obvious comparisons to what NVIDIA has done with GeForce Experience. The ReLive integration is clean and efficient, well designed and seems easy to use in my quick time with it. There are several key capabilities it offers.

First, you can record your gameplay with the press of a hotkey; this includes the ability to record and capture the desktop as well. AMD has included a bevy of settings for your captures to adjust quality, resolution, bitrate, FPS and more.

Along with recording is support for background capture, called Instant Replay. This allows the gamer to always record in the background, up to 20 minutes, so you can be sure you capture amazing moments that happen during your latest gaming session. Hitting a hotkey will save the clip permanently to the system. 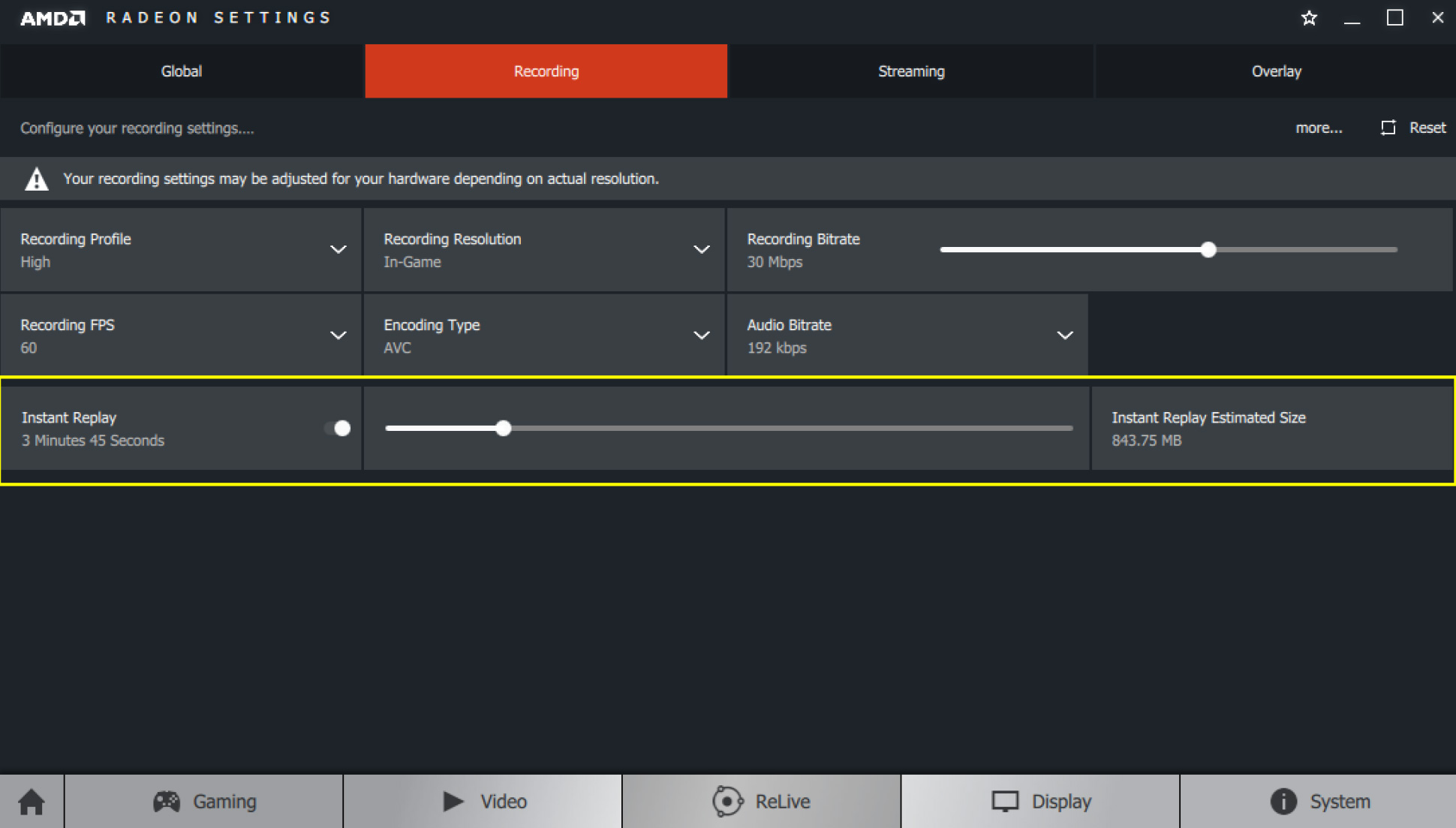 What good is a capture stack like this without the ability to stream? ReLive allows you to not just stream to your favorite services like YouTube and Twitch, you can setup and configure your streaming overlays easily to customize it for your audience as well. 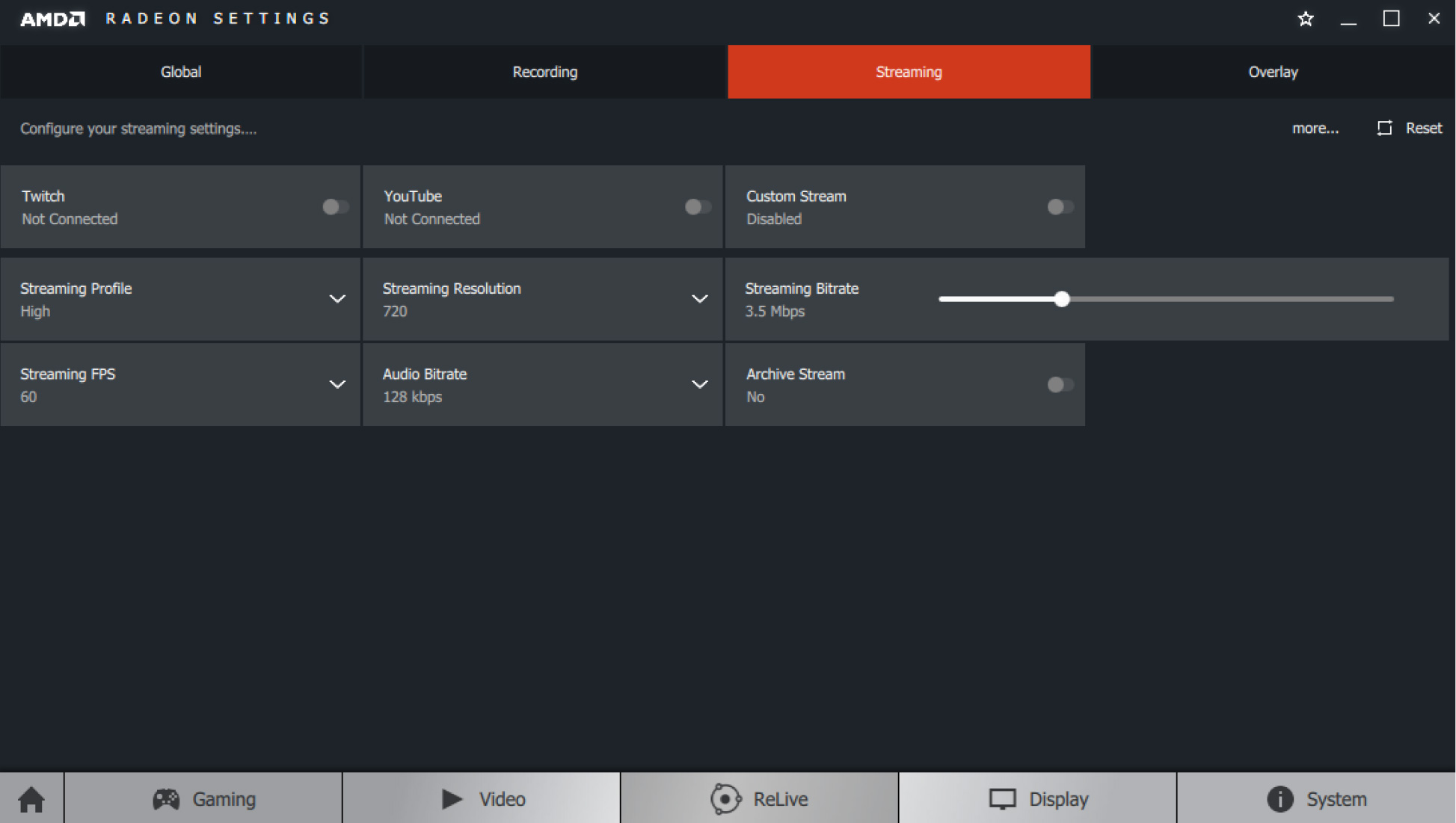 AMD has done a great job with this option: you can include system information, a webcam and custom graphics, pre-configured in the Radeon Software before going live.

All this functionality is available through a hotkey enabled popup overlay while in-game, making it easy to change settings and enable features without having to return to your desktop.

This capability comes a performance cost, but not a very dramatic one. AMD indicates that users will see only a 3-4% drop in your running frame rate when ReLive is enabled. I’m going to do some more testing in the coming week to validate, but that seems like a worthwhile tradeoff for the capabilities it provides.

One thing that AMD was quick to point out to us was that Radeon users get this capability in the driver, not in a secondary software application that requires registration. Throwing shade…

The second major feature addition with the Radeon Software ReLive Edition is called Radeon Chill and is a result of AMD’s acquisition of the HiAlgo last year. The goal in this implementation is to reduce power consumption on the GPU (and thus temperatures and noise) without affecting the user experience while gaming. 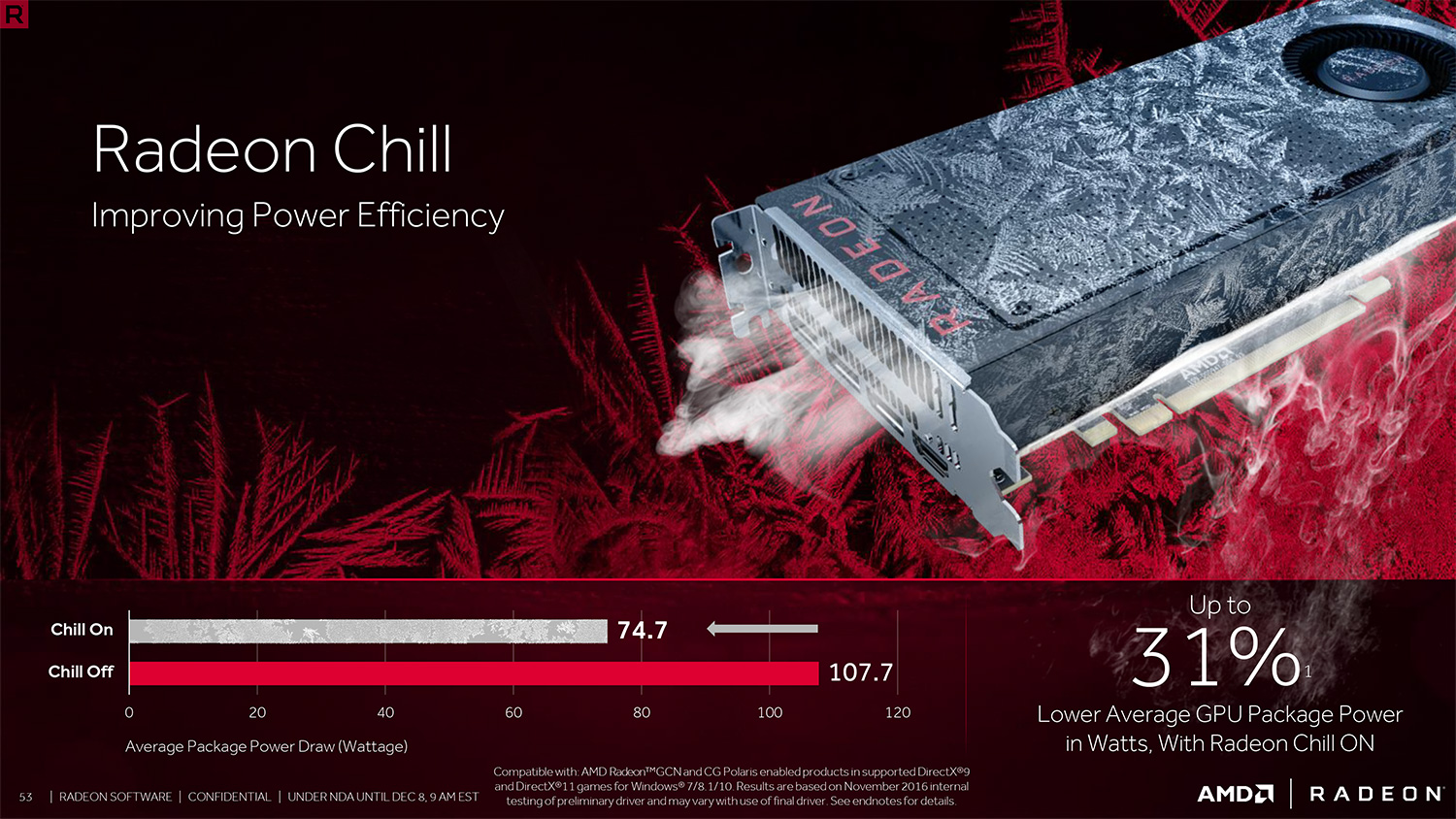 The magic trick at work with Chill is the ability to scale down the frame rate of the game during times when the motion on the screen is still and mostly static. When the user moves a mouse or the action on the screen starts to animate more quickly, the frame rate is increased again instantaneously with the goal of maintaining fluid motion and quick responsiveness. Chill also sets an upper frame rate cap on games to avoid excessive power use.

If you’re like me, you probably hear this and are immediately skeptical about its ability to function without adversely affecting gameplay. In my talks with AMD’s Scott Wasson, he assured me that in games where it is whitelisted, it can actually improve responsiveness by lowering the buffered frames in the pipeline. 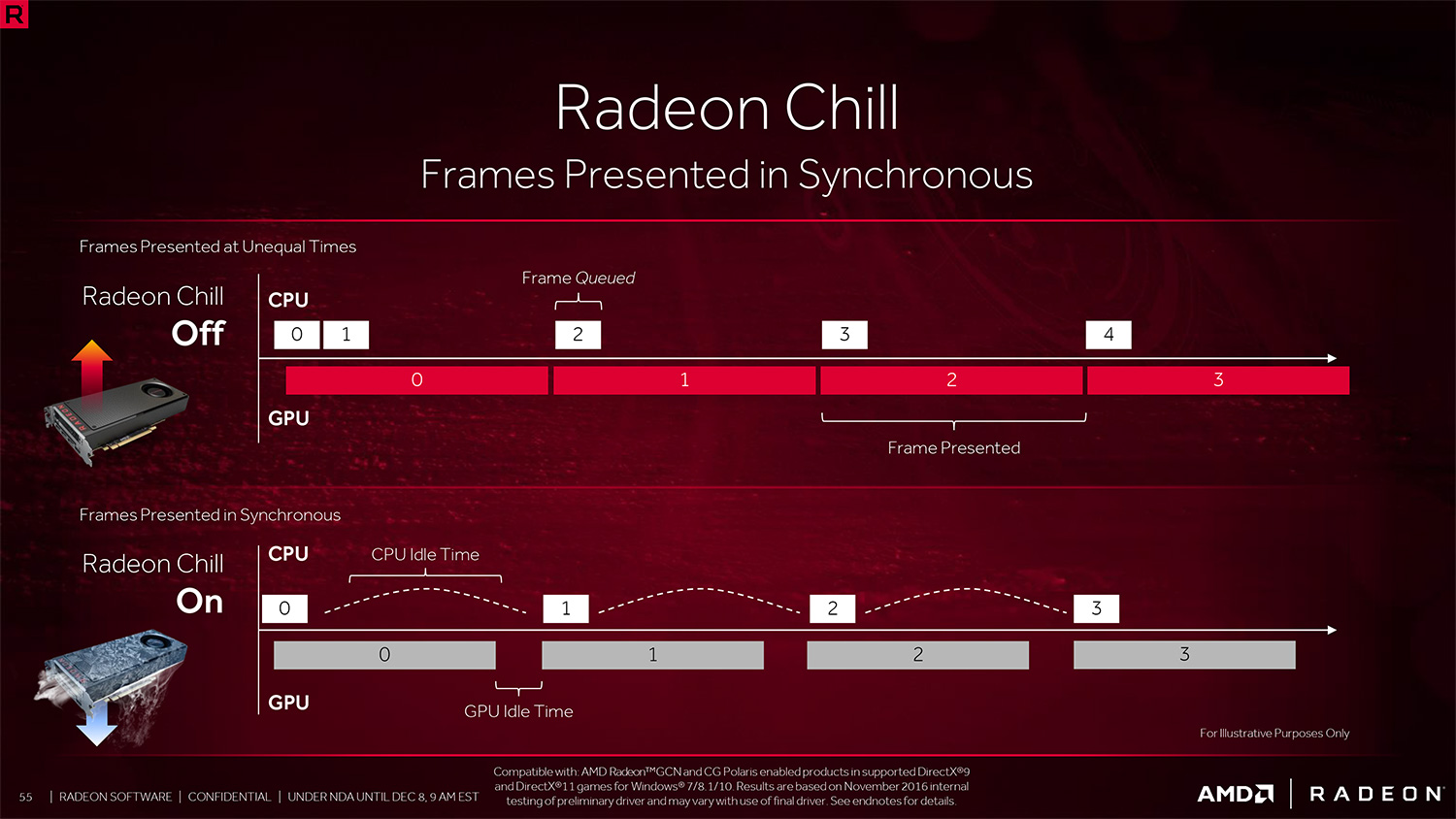 Using a tool like AMD’s new OCAT or PresentMon to measure the “time to present frame” data point, a metric taken from the Windows ETW (event timers), AMD shows improved responsiveness with the Chill feature enabled. That’s definitely compelling but we’ll need to measure smoothness of frame delivery as well with Radeon Chill and see how it behaves when going in and out of the lower frame rate states. Stay tuned.

The benefits of Radeon Chill are going to vary from game to game, with the standout example presented by AMD being World of Warcraft. In that case, there was a 31% reduction in power consumption, a 13 degree Celsius drop in average GPU temperature and a decreased 99th percentile frame time of 51%. In addition to those benefits, you would also get lower sound levels from the GPU cooler.

Today the feature is whitelist controlled and must be enabled in the driver for each game. That list only includes 18 games and all of them are DX9-11. There is no support currently for Vulkan or DX12 titles and AMD says only that it is “looking into” developing that capability for a future release. Adding more games is something that we’ll have to wait and see on – I imagine that there was a solid amount of development already completed on the 18-game list we have today before AMD’s acquisition of the HiAlgo and AMD’s commitment to the technology needs to be proven over time.

Enabling the feature is straightforward and you can configure it with a minimum and maximum frame rate per game. 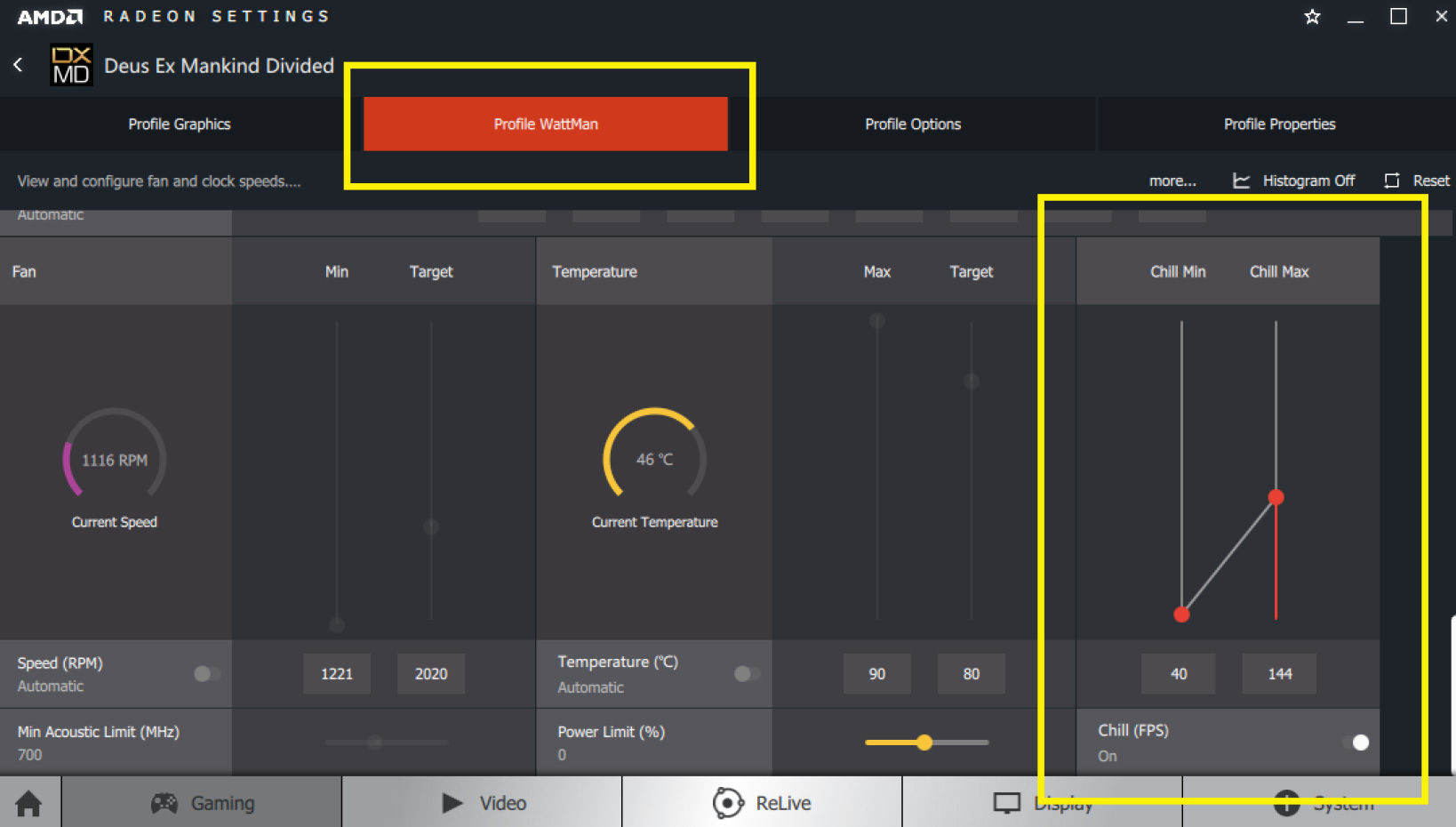 The configurability here makes Chill worth trying out, even if you aren’t sure on the technology itself. If you have a 60 Hz display and want to be sure your game doesn’t go below that, setting the minimum to 60 FPS prevents it from doing so.

The numbers provided by AMD are compelling but I envision a lot of work will go into proving that the technology will rarely, if ever, adversely affect user experience or response time.

As is usually the case with major driver releases, there are few less flashy features included that are worth mentioning. VP9 4K60 decode acceleration is now GPU accelerated (This is actually a software implementation, so it will not be as power efficient as originally expected.) so you are ready for Google’s new streaming services (with Polaris GPUs), to start. 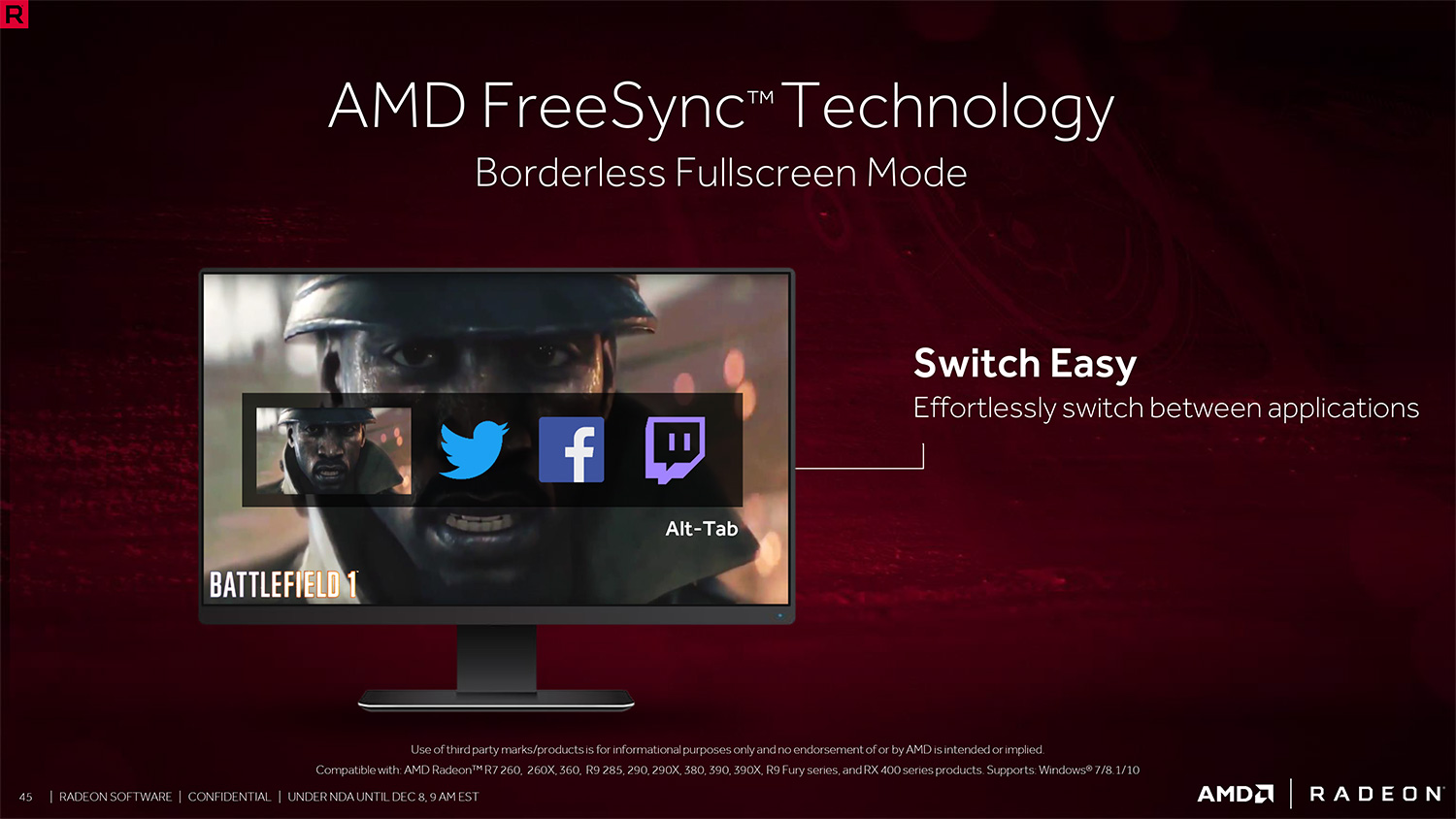 FreeSync now supports borderless windowed mode, improving the ability for gamers to switch between applications while maintaining a smooth display frame rate. This also has the effect of lowering your input lag on borderless windowed games as the window manager is working in sync with the display rather than opposed. 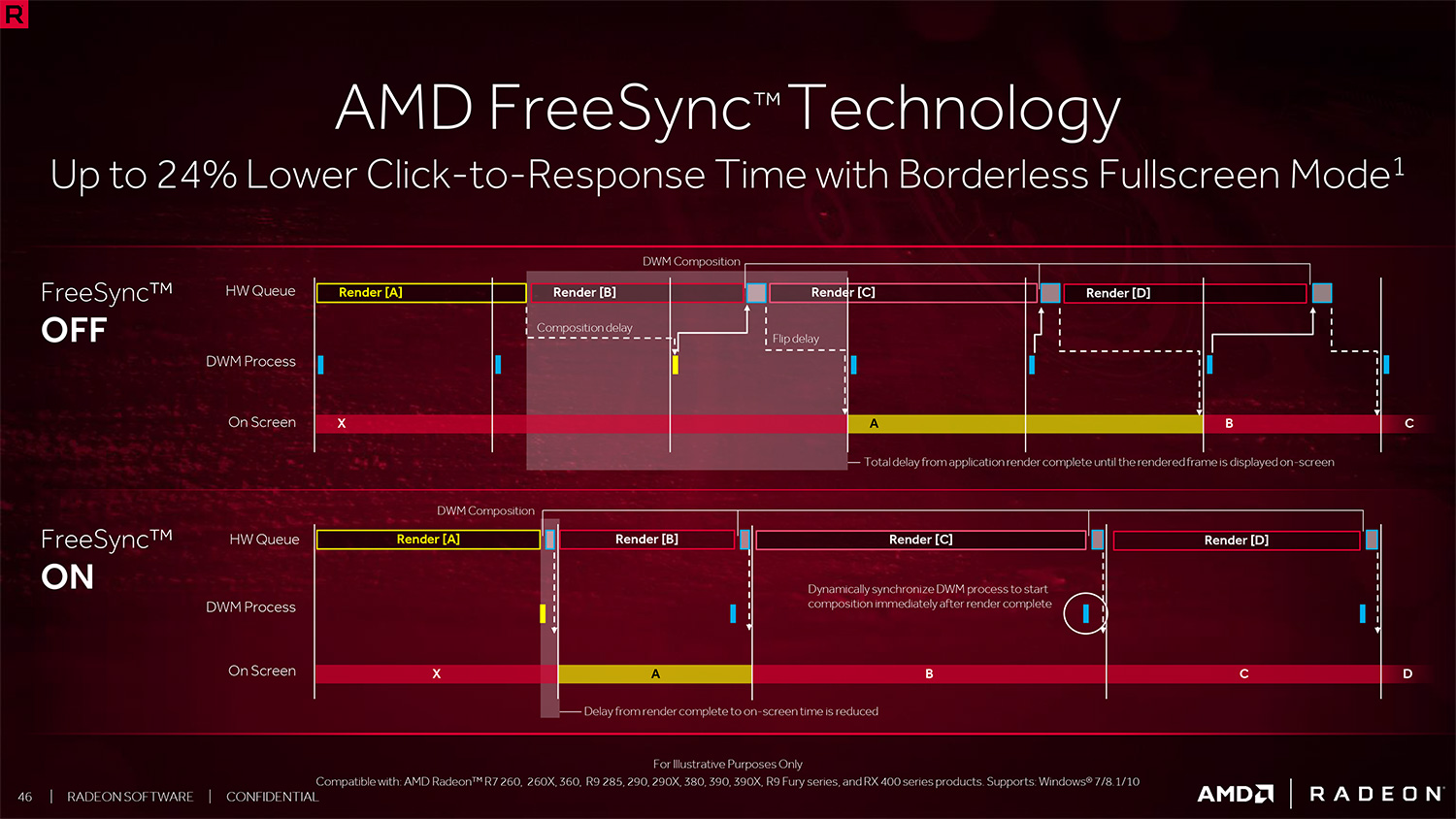 Finally, thanks to a Raja-induced circumstance, the new driver has the ability to easily detect and announce the presence of a bad HDMI cable, preventing users (and executives) from spending hours trying to troubleshoot the wrong problem. 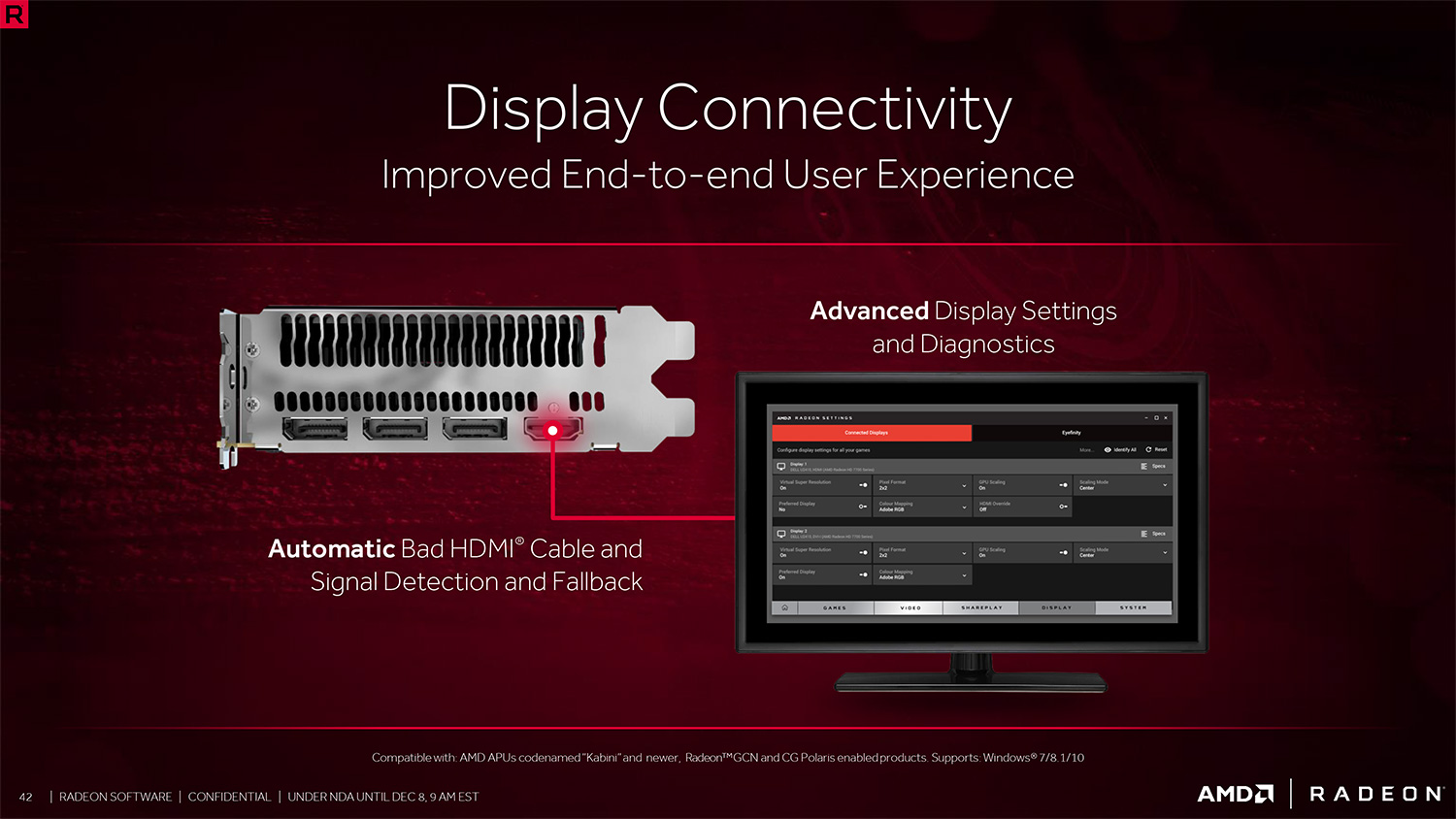 The Radeon Crimson ReLive Edition driver continues AMD’s promise to iterate with major software releases on an annual cadence. This time we don’t have major performance improvements or shifts in the API landscape to hang a hat on but the Radeon Technologies Group was able to pull together a set of new features that are compelling and will likely have a direct impact on Radeon gamers’ daily use. While the Radeon Chill feature is definitely niche, both in terms of users that will care about its benefits as well as the games it supports, it shows innovation and drive from a group that previously lacked it.

The ReLive capture, instant replay, and streaming integration looks great and the implementation with Radeon Software makes for smooth usage scenarios. Features like the popup overlay and the ability to modify the settings while in-game should mean that the majority of gamers will find a use for it, whether it be for live streaming or just sharing clips of their gaming escapades with friends online. ReLive also means that NVIDIA has one fewer software advantage on Radeon. 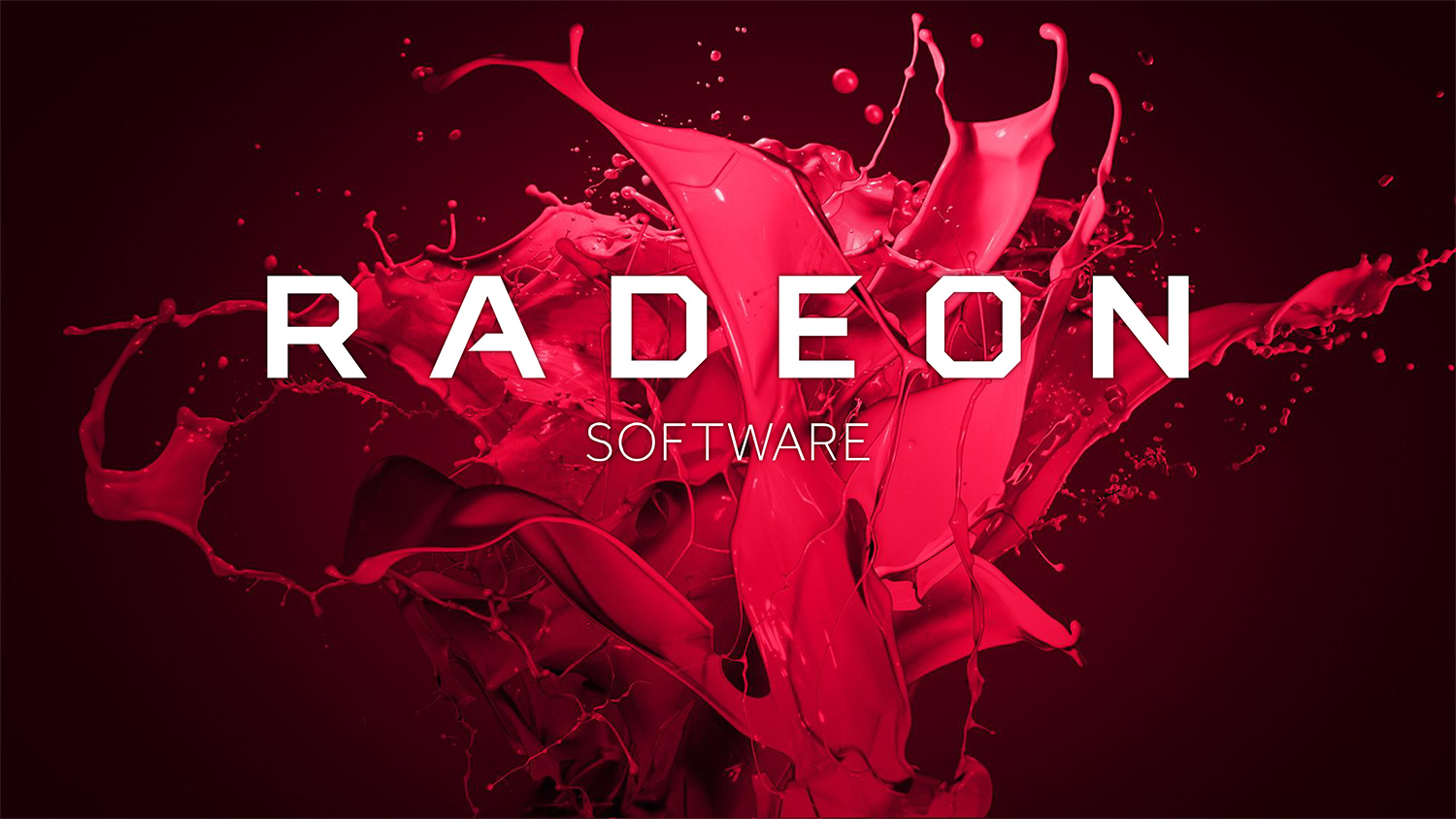 Overall, I’m impressed with what AMD and the Radeon Technologies Group has done here, even if it’s harder to show off new features than higher benchmark results. After many conversations with AMD and the software team specifically, I honestly believe that leadership understands the importance of drivers and accessory software to the total platform and is committed to it long term. The days of AMD being in the backseat on software may be ending but the consumers will be the final judge of that.